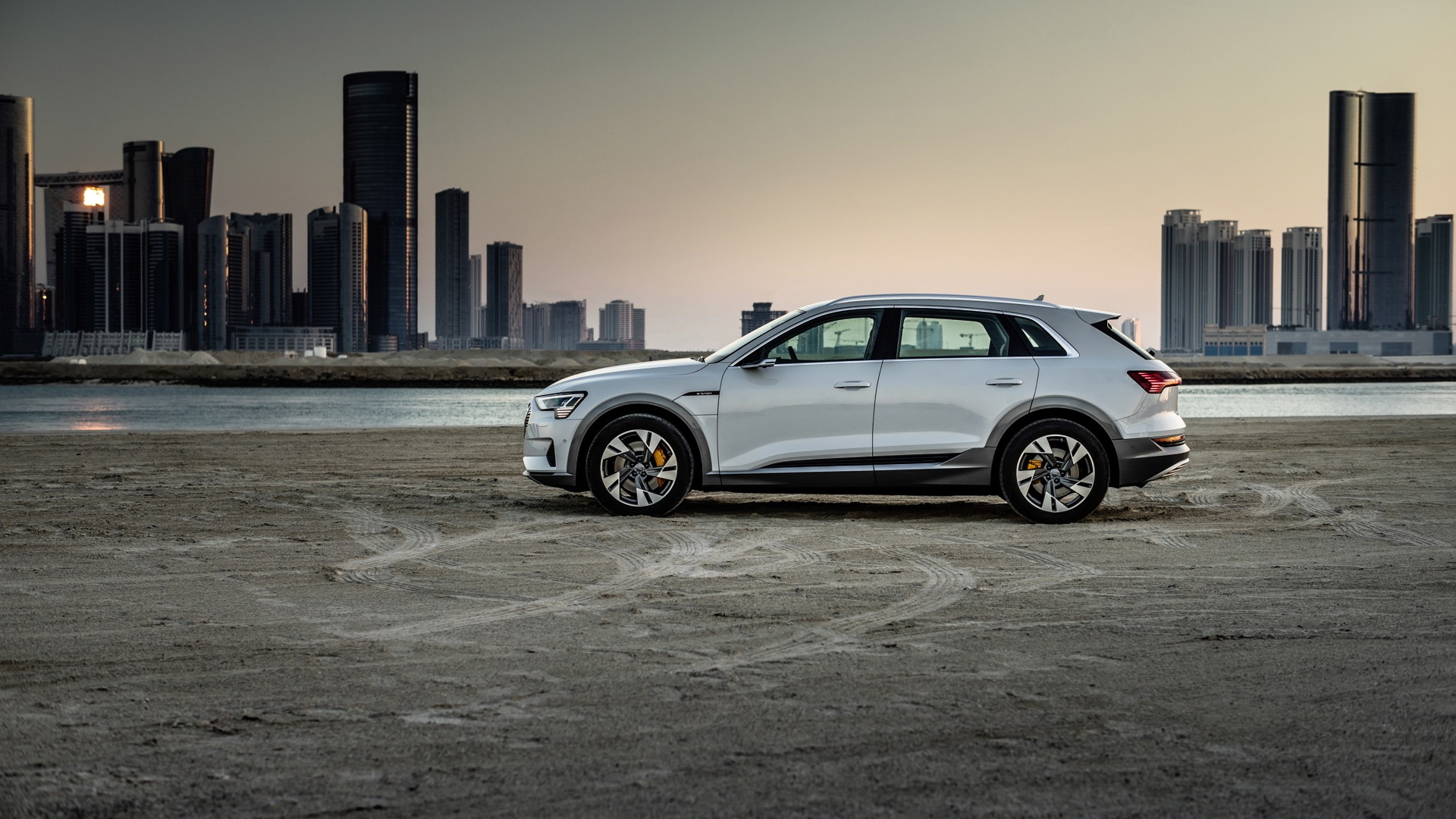 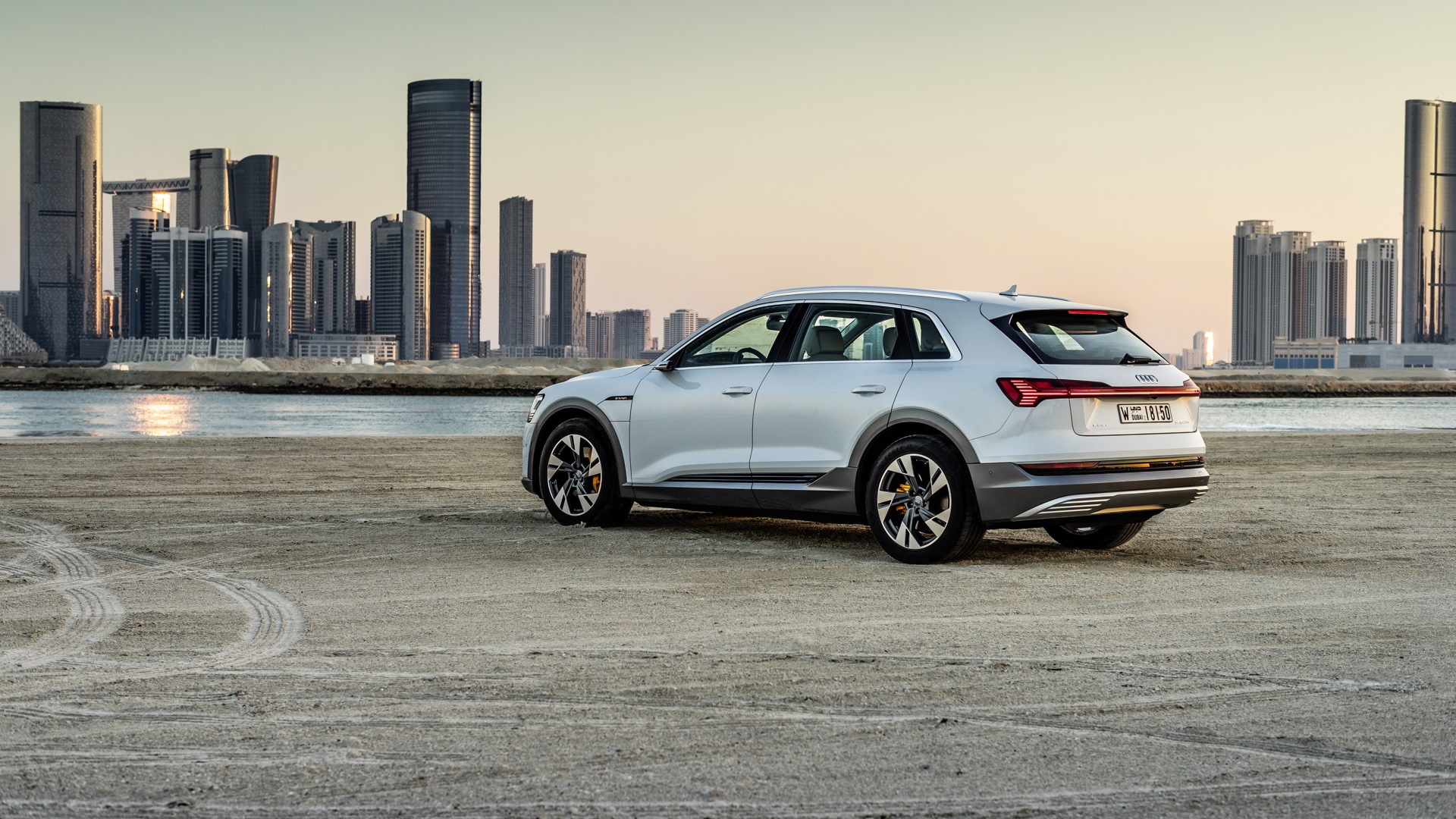 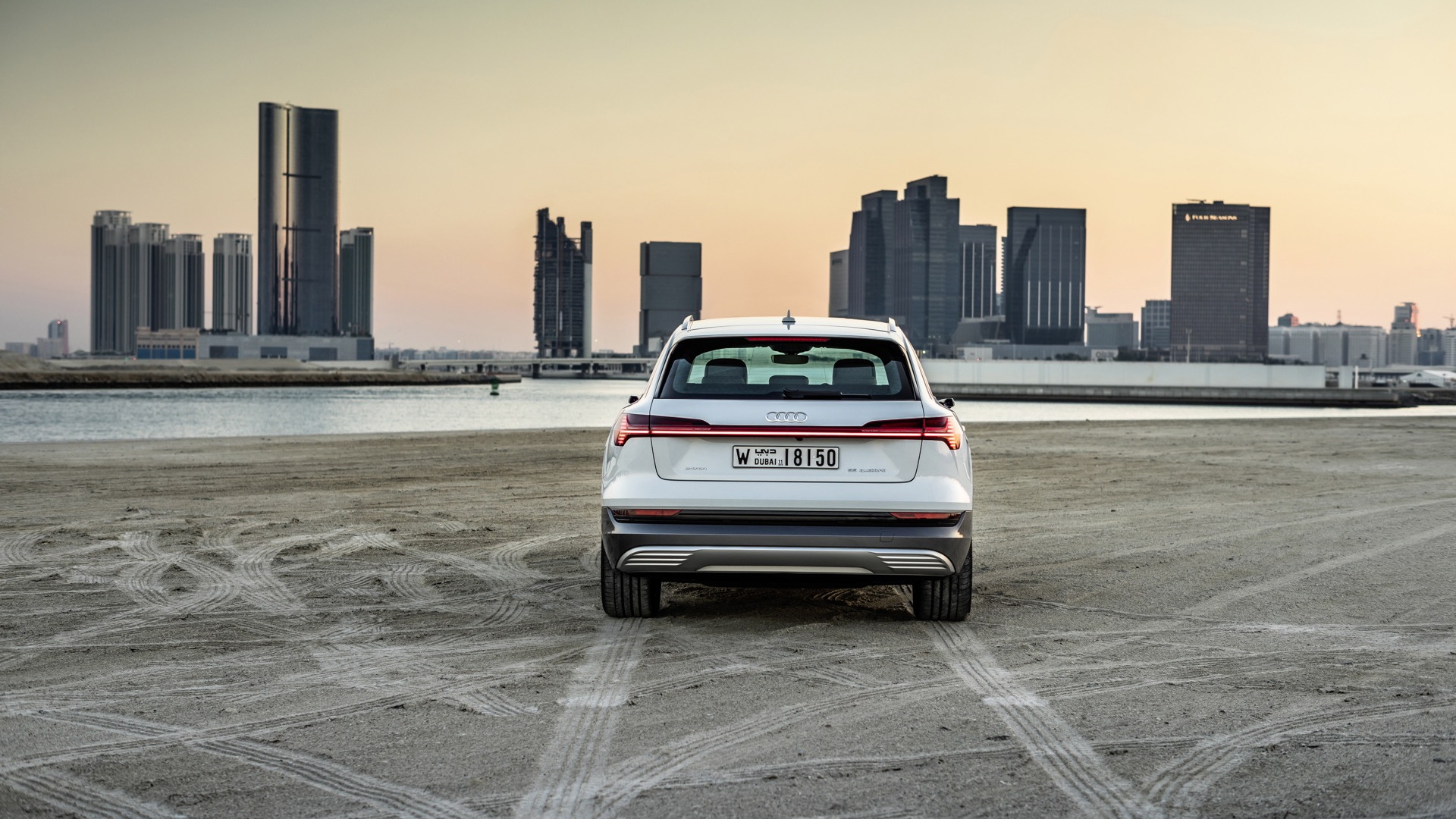 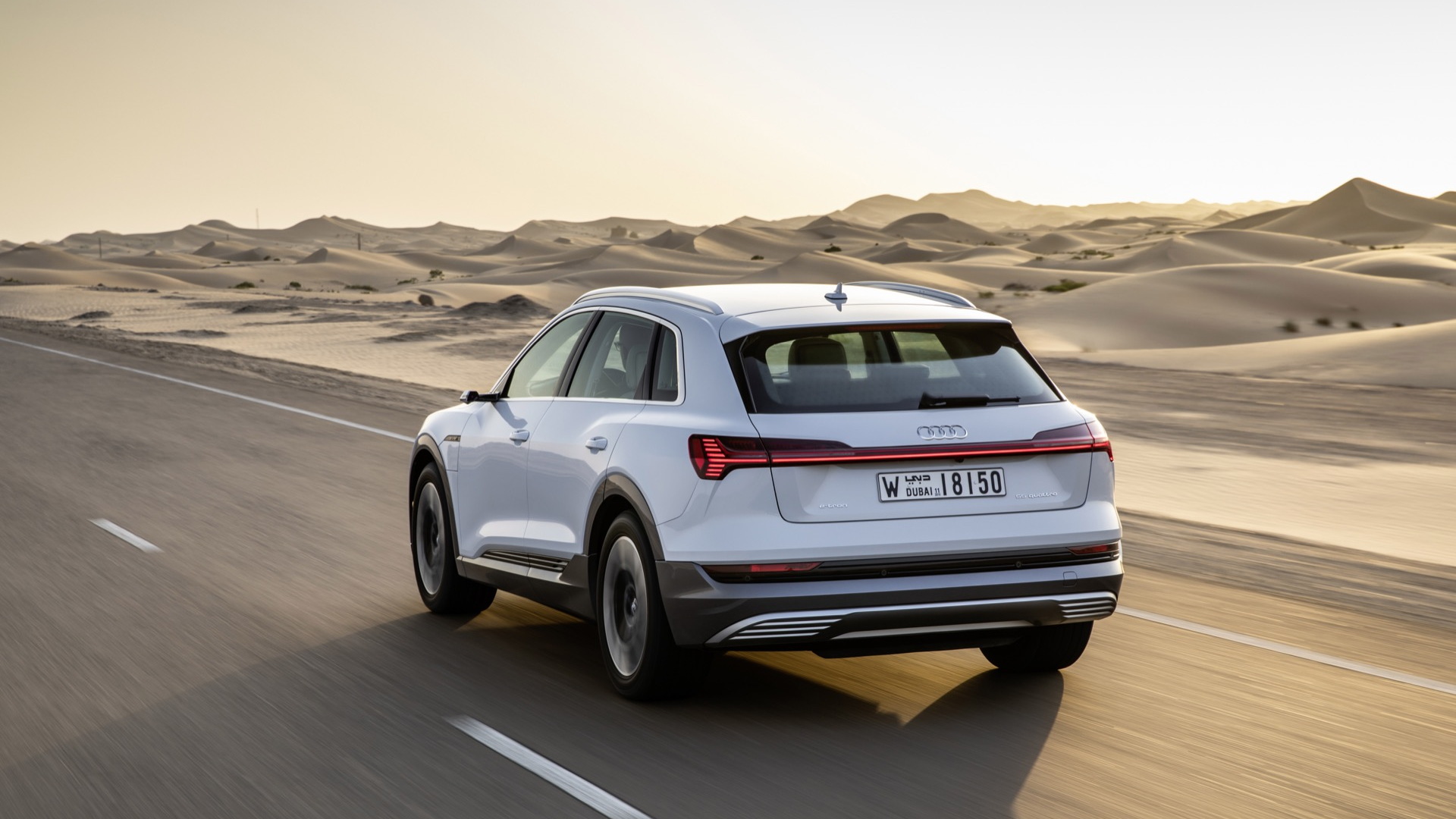 The Audi e-tron SUV that goes on sale next spring in the U.S. isn’t just Audi’s first fully electric vehicle. It’s the luxury brand’s way of showing how an increasingly inevitable part of the future can fit right in and be a part of four-ring identity.

In our first drive this week, we found the e-tron to be exactly that—simultaneously flaunting some daring, different engineering decisions under the surface but looking and feeling, at face value, to be a familiar, mainstream-luxury Audi.

The e-tron appears, inside and out, as if it were a larger member of the allroad family, taller than Audi’s sedans but somewhat lower than its SUVs. It rides on a wheelbase that’s about halfway between the Q5 and Q7, and while it’s shorter than the Tesla Model X it’s about nine inches longer than the Jaguar I-Pace.

Inside, the cabin borrows attributes from the brand’s latest A8 and A6 sedans, as well as the Q7 and Q8 SUVs. The seating position is rather high, but a beltline of distinctive trim—open-pore ash wood in the vehicle we spent the most time with—separates the dash and gives the front an airier feel and better vantage point. Audi’s widescreen virtual cockpit gauge cluster and the new MMI touch response system, with dual screens and tactile confirmation, give it the same familiar look and interface that the brand’s other swankier models have.

As for those different engineering decisions, Audi opted for two current-excited (wound) motors for the e-tron, for their higher-speed efficiency and because they’re not dependent on rare-earth materials. It also completely re-engineered the brake system around a goal of recovering as much energy as possible.

Go with the boost

With a nudge of the shifter back to "S" mode, from "D," you can toggle Sport mode and access a Boost mode that pushes the front motor from its usual 168 horsepower to 181 hp and the rear motor from 188 hp to 221 hp. Boost mode, which lasts eight seconds at a time, increases overall system specs to 402 hp and 490 lb-ft—a gain of 13 and 18 percent, respectively. Audi quotes a 0-60 mph time of 5.5 seconds using Boost mode, and without it the time is somewhere near seven seconds. The e-tron can tow up to 4,000 pounds (the same as the Q7 2.0T).

The Boost mode time isn’t quite as quick as the Jaguar I-Pace or Tesla Model X, but about the same as the Q7 with its larger 3.0T gasoline engine, and significantly quicker than with the 2.0T base engine. There’s very little motor whine, so the quietness makes the e-tron’s launch from a standing start feel especially quick.

Audi Drive Select is also nearly identical to gasoline Audi models, allowing modes that work with the standard air suspension and include modes ranging from Offroad and Allroad to Dynamic. The ride is on the firm side but well-damped, and the cabin is tight and supremely hushed, without active noise cancellation.

Our first drive in the United Arab Emirates around Abu Dhabi took us up a mountain road to about 5,000 feet elevation and back down; on a loose trail along dunes at the start of a vast expanse of desert; and on a series of freeways riddled with speed cameras and what we were told were very strict speed limits. On one stretch we reached that road’s 99-mph limit but didn’t see the e-tron’s 124-mph electronically limited top speed.

The e-tron wears the quattro badge. All-wheel drive with an electric vehicle is faster-responding, Audi reminded us, because it doesn’t require any clutch engagement to send torque where it’s needed. The electric motors can react in as little as 30 milliseconds to a change in traction or for stability needs.

Dynamically, the e-tron feels a lot like a Q7 on the road—just one that’s many hundreds of pounds heavier. The e-tron's curb weight is around 5,500 pounds, but the approximately 1,500-pound battery pack is mounted very low in the vehicle—under the floor, with an upper deck below the rear seat aimed at fitting in a few more modules. Its steering feels precise but lacks even a hint of feedback, much like those larger gasoline vehicles, and when pushed hard into lower-speed switchbacks in Dynamic mode the e-tron pushed early into understeer even though the rear motor is more powerful, no matter what we did with our right foot.

It’s likely that Audi will reserve a more rear-wheel-biased system for the Audi Sport three-motor version of the e-tron that’s due in about a year.

Brake by wire, on multiple levels

The brakes go about their business in a way that’s different than most other electric vehicles. Actual regeneration from the motors is used to brake at 0.3g or less, and an electrohydraulic system kicks in only when needed to provide braking force from the discs and pads. In all but emergencies it’s a brake-by-wire system, with a “dummy” piston pushing back to maintain the right pedal feel.

With a coast mode plus two levels of regenerative braking, up to just 0.18g, this isn’t a car that aims for one-pedal driving. Instead it’s a vehicle that Audi has tuned for driving with two pedals, dabbing the brakes to get the most regeneration.

The e-tron will be the first vehicle in the U.S. capable of DC fast charging at 150 kw, which can bring it from zero to 80 percent in just a half-hour, Audi says. Through Amazon Home Services and its network of electricians, it’s helping make the installation of Level 2 (240-volt) chargers essentially a one-click process. It also includes 1,000 kwh of public charger access, via Electrify America's network.

Range remains a sticky point; the e-tron has achieved a 248-mile rating in the optimistic WLTP system used in Europe, expect the U.S. number to be 10-15 percent less than that—certainly more than 200 miles, though.

The e-tron, which starts at $75,795, pencils out with one convenient truth: Once you consider the $7,500 federal tax credit, plus any other state incentives, it doesn’t add up to much more than equivalent gasoline models. The catch? For now, and even once they start arriving in the spring, you’ll have to order one with a $1,000 refundable deposit. Audi is planning to deliver them on demand, without maintaining the dealer stock that’s otherwise the norm.

See the 2019 Audi e-tron first drive at Motor Authority's sister site Green Car Reports for more about the 2019 e-tron. It may not look and feel all that different than Audis with a tailpipe—which doesn't yet signal any end for engines and tailpipes in the lineup but may very well be the start of a new normal.

Audi provided travel and lodging to Internet Brands Automotive to bring your this firsthand report.