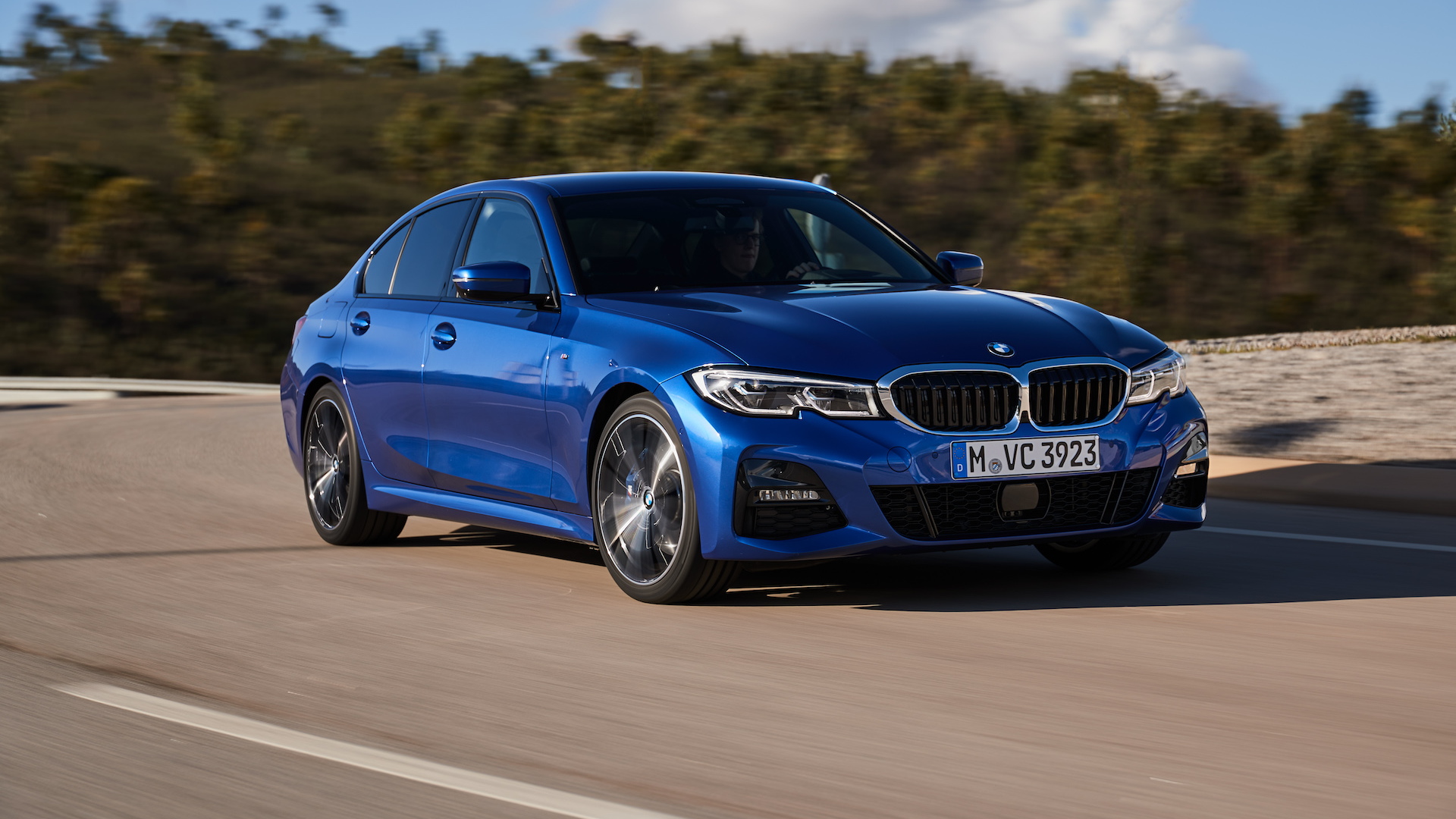 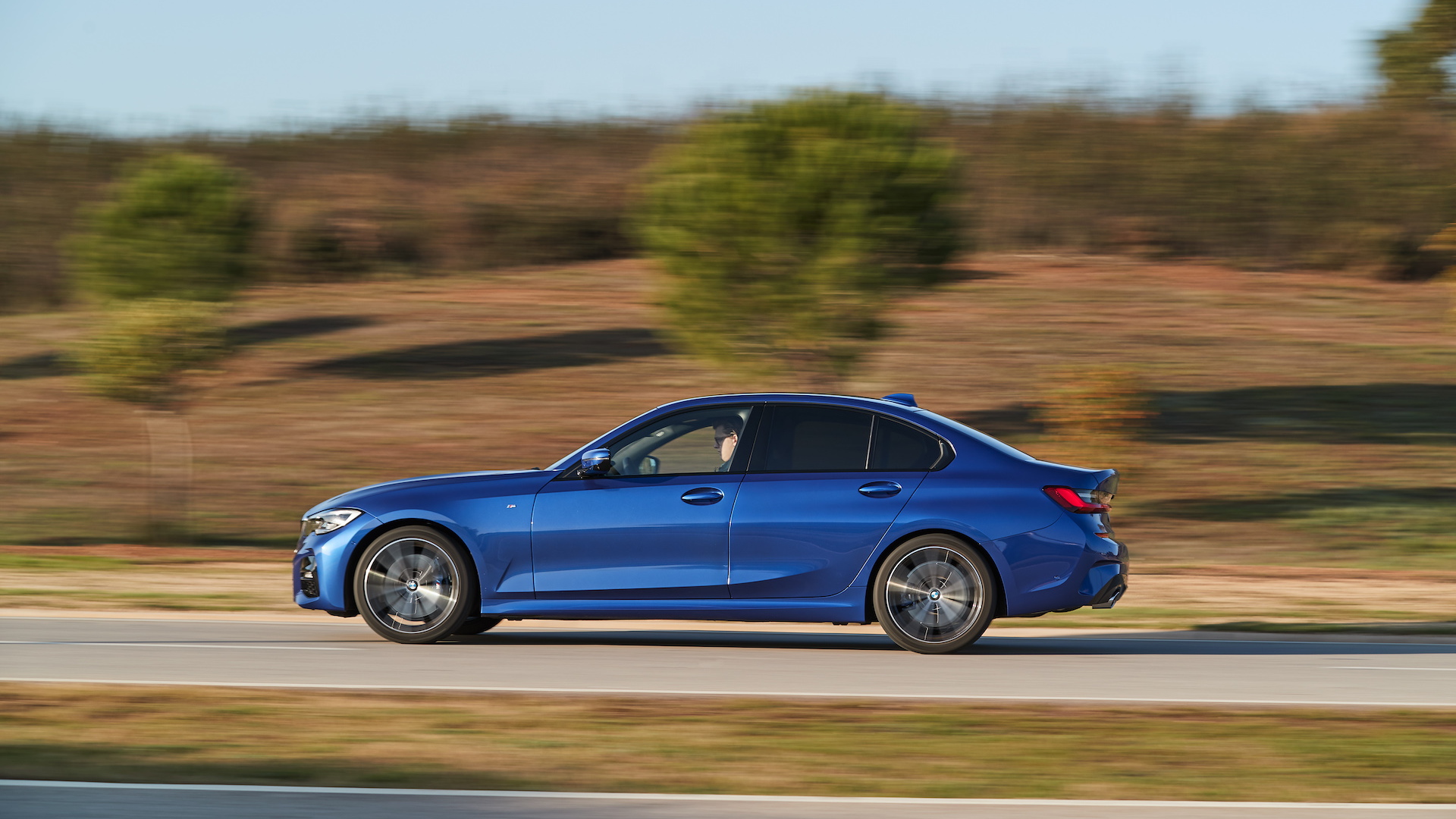 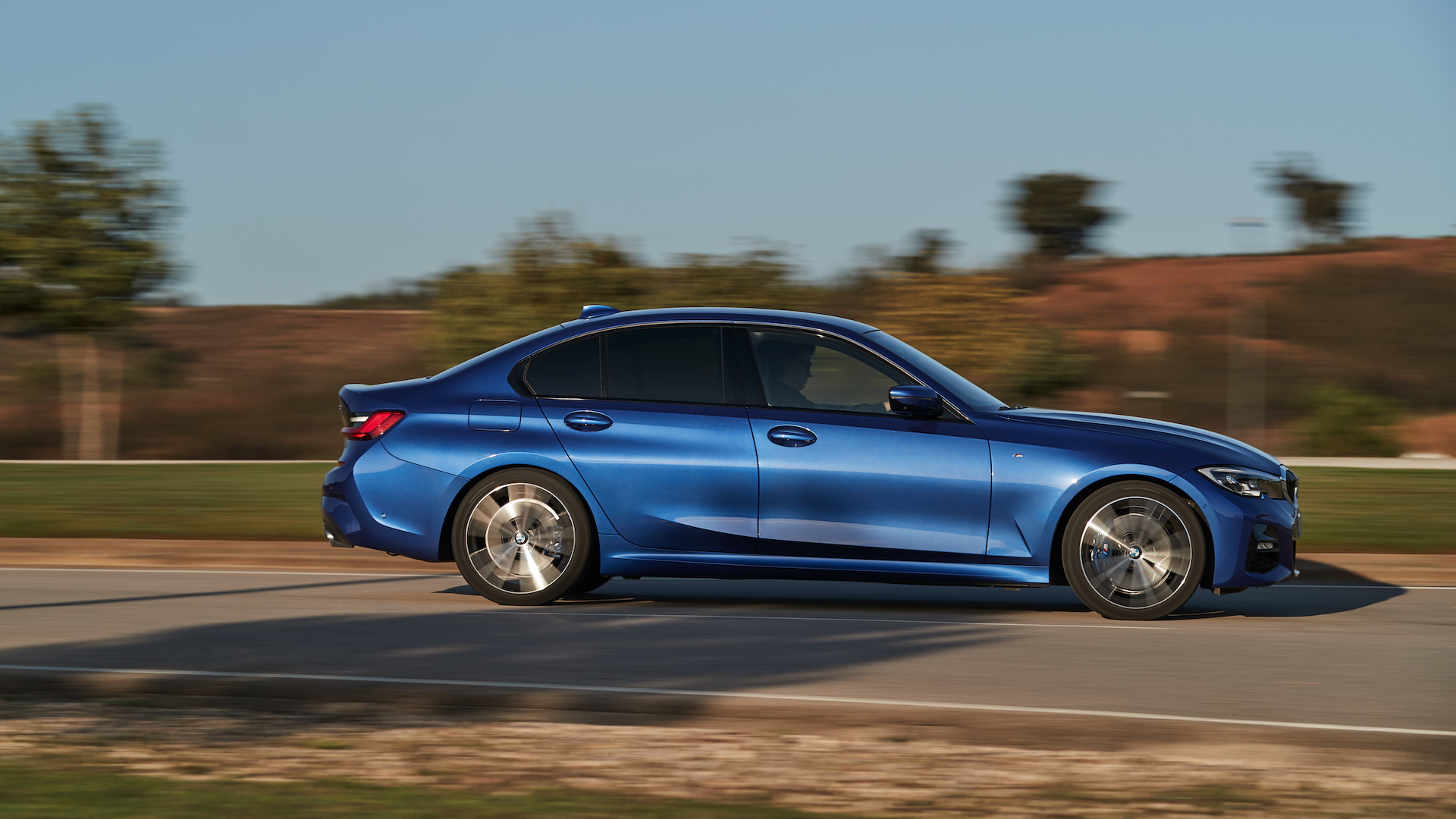 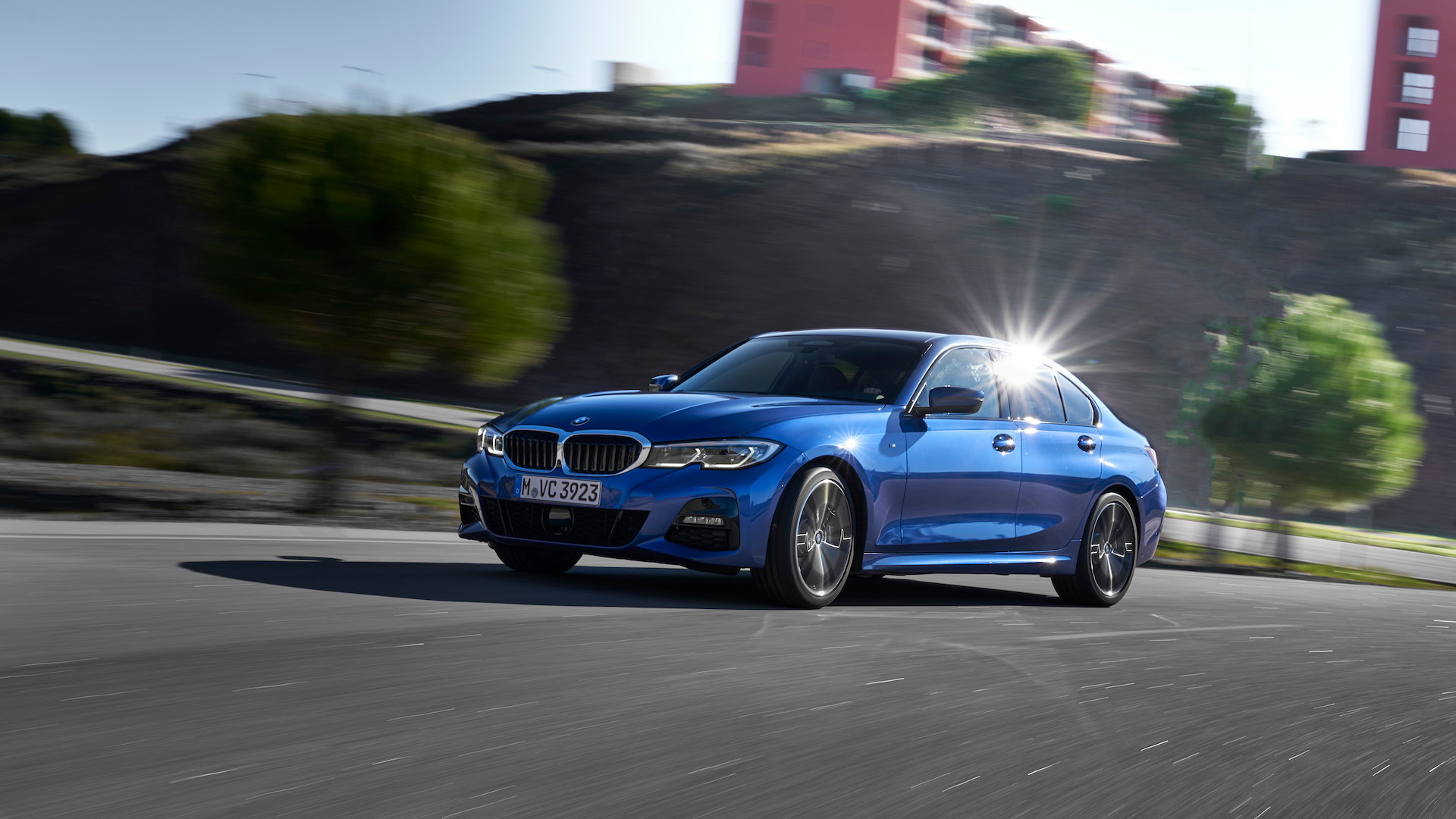 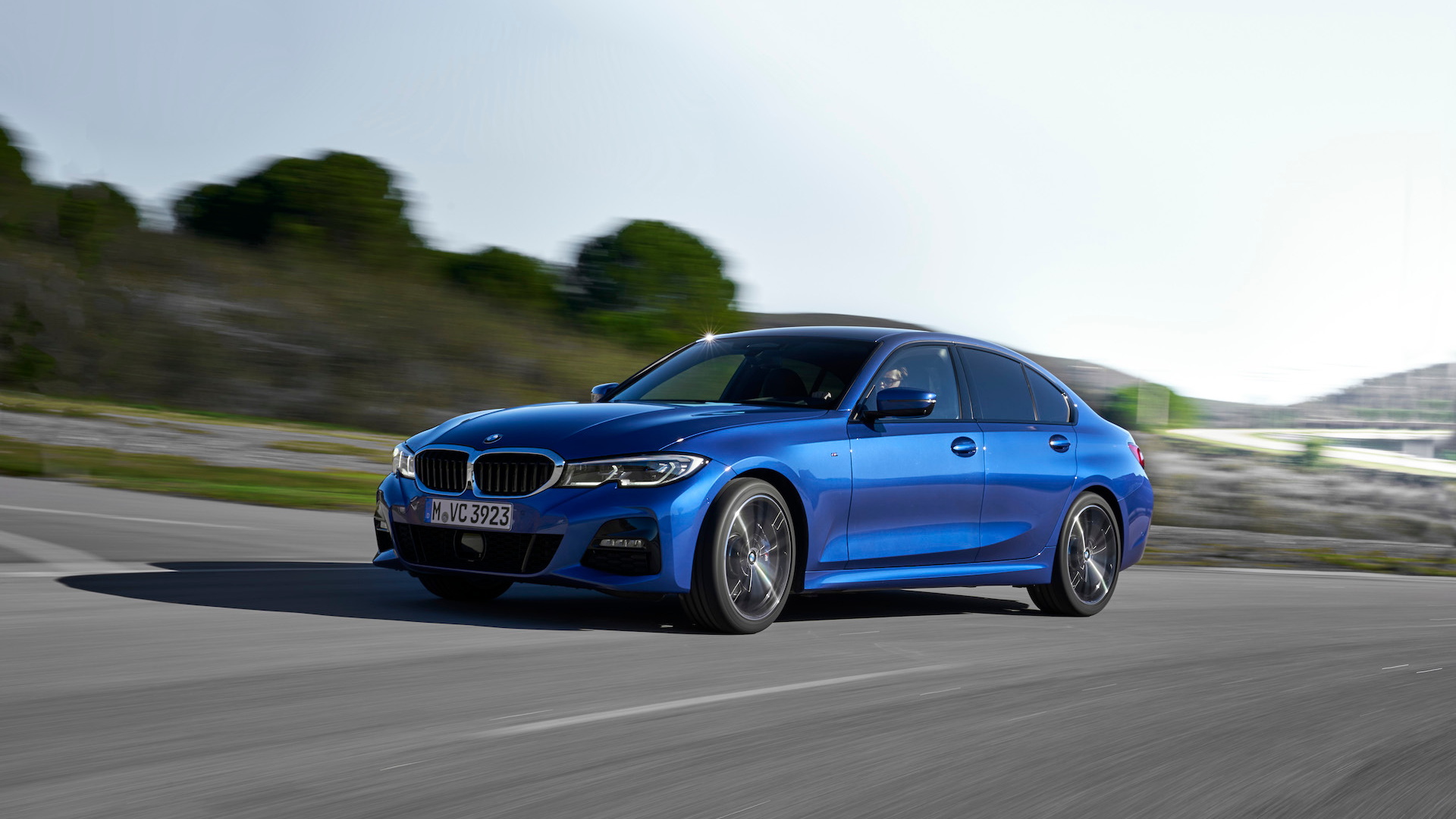 The BMW 3-Series has made bank for decades off its undeniable clout. With its mastery of nimble steering feel and brilliant balanced handling, it’s oozed something from its pores that seeps into brains of enthusiasts like sugar, or mercury. When we talk about “sport sedans” it’s understood we really mean the 3-Series.

But the 2019 BMW 3-Series is such a different thing today than the 3-Series was ten or 20 or 30 years ago. (Wind back the clock far enough and you’ll find a 3er to suit any extremist–er, purist.) Never mind all-wheel drive, or spun-off body styles: It’s within a cubic foot or so of not even being a compact anymore.

Now the 3-Series makes bank off its myriad personalities. It’s a comfort-tuned luxury commuter in one form, a shredded ultra-marathoner in others. It’s a car of a thousand faces, if you spend enough time on the configurator.

The 2019 330i sedan and the coming 2020 M340i sedan don’t shift course in any discernible direction. Instead they’re a real Rorschach test into the future of driving: When you look at the better body, uprated engines, and improved traction, do you see a benchmark in car history, or a bookmark?

The “G20” 2019 3-Series has the long-hood, short-deck proportions of a smartly penned sport sedan, minus the ridiculous wedge it doesn’t need to shout its intentions. The outline telegraphs a car that’s arrived, not one that’s in a hurry to build a reputation.

This time, the stance is slightly more sporty, the lines more pronounced than those in the car it replaces. The grille doesn’t emboss the front end, it emerges from it sculpturally, above wide inlets that also buttress thin LED headlights. Down the sides the 3er clearly divides the shoulder line from the window line, without throwing back entirely to the “flame surfacing” era. The rear pillar curls up in the signature Hofmeister kink and in the frameless rear windows, while at the tail, split pipes and thinner taillights give the rear view a rounder outline.

The styling conversation won’t end soon. There are murmurs of Lexus in the three-quarters view and in the T-shaped front end intakes. The nose seems to be sculpted for Instagram appeal. A single metallic frame rings the “twin-kidney” grille, so is it really?

What’s the cabin like? Slightly bigger, but more logically framed. The center display panel’s finally in step with the console, not peering down over it from an awkward perch. It’s a touchscreen, too, one near deep cupholders and a smartphone bin, as friendly as a Honda Accord. We’re less convinced by the hockey-stick gauges on the TFT gauge cluster and the overly thick steering wheel, but the horizontal slits of controls keep the dash tidy, and the slim lighting piped into the door handles and armrests has some of the exuberant wave action of the i8.

CHECK OUT: BMW's 3-Series Sports Wagon dead in the US

BMW 330i: twin scrolls, no waiting

The 3-Series is one of the few vehicles on the road where “how does it feel?” is as vital a question as “how does it look?”

America’s entry-level 3-Series, the 2019 330i, feels fairly vibrant and encouraging as it hustles across southern Portugal on roads suggested by BMW. A massaged version of the outgoing 2.0-liter turbo-4, the new edition pushes out 255 horsepower, and 295 pound-feet of torque, up 7 and 27, respectively. The rear-drive 330i gets a standard 8-speed automatic, a set of selectable drive modes, and an all-wheel-drive option.

By the numbers, the 330i hits 60 mph in 5.8 seconds, and reaches 155 mph at the top end. By the seat of the pants, the 330i seems almost placid for a hard-charging engine that straps on a twin-scroll turbocharger, direct injection, and variable valve control, all in a frantic search for effortless power. Peak torque shows up at 1,550 rpm and tapers off past 4,000 rpm, leaving a wide plateau of brisk acceleration; peaky, cammy engines are all but a distant memory in today’s turbos. The 8-speed, paddle-shifted automatic takes a half-second to crack off downshifts if it’s not toggled into Sport mode, and has some gaps in its gear staging, like the big dip from second to third. BMW’s declined to fit any manual transmission in this 3-Series, so it is what it is, which is...fine.

BMW outfitted its 330i test cars with the M Sport package, for the drive on glass-smooth byways near the Portimão raceway. M Sport wraps in a limited-slip differential and a stiffer M Sport suspension that drops ride height by 0.4 inches, but doesn’t come with the newly available adaptive dampers (they’re $700 extra, more on that later). The high-sport spec feels a bit more tense than non-BMW M buyers might want every day, all the time. Not brittle, it’s also not supple, and big 19-inch wheels and offset summer tires (225/40 fronts, 255/35 rears) affect its variable-ratio steering and ride in its more relaxed drive modes. In comfort mode, the steering has on-center play that masks the judder induced by scabby roads, but that mutes its feedback. Sport mode resolves that, while it pumps in amplified exhaust noises that don’t offend as much as they once did. The big wheels sends not so good vibrations into an otherwise composed ride, made possible by a double-jointed front suspension and a multi-link rear, with sophisticated dual-mode mechanical shocks. A turbodiesel 320d, close in weight to U.S. spec and fitted with 18-inch wheels and all-season tires, nailed the steering/ride compromise with far more tire sidewall to soak up the worst of the road.

READ: Next BMW M3 and M4 will have manual transmission, AWD

The 330i leaves some slack in its M Sport leash, but in the M340i xDrive, it strains at it.

BMW offered slightly disguised M340i sedans for track time at Portimão, a thrilling road course with bends and hiccups and drop-away surfaces that sometimes leave only the sun and the skitter of tires as reference points.

Shod with all-wheel drive and adaptive dampers that adjust firmness based on GPS data, the M340i impales the notion that only pure M cars should wear the badge. Until a true M3 arrives, the M340i has all the hallmarks. It feels a lot like this year’s new M5, in fact—lots of lurid tail-wagging in precisely doled out moments of joy, the teen-date awkward fumbling over its controls on first blush. What’s this do? Is this supposed to go there?

The M340i positively vacuumed up the Portimão jigsaw puzzle of banks and dips and straights. With its default traction and stability controls left on, its all-wheel-drive system set to entertainment mode, it whipped its tail out exactly on cue with a calculated degree of yaw, then pulled itself back into shape for the dozen tricky transitions to come—entertaining in a predictable way, if a videogame trick in a car that earned its stripes in an analog era. It screamed down the front straight, though it mushed through an inch of brake pedal travel at the end into the first right-hand turn (after five waves of tests, everything gets a little sloppy). Its torque-vectoring sport differential worked overtime to rotate the car in vain attempts to keep up with pro instructors drifting calmly through wide corners in M2 Competition coupes. Near the end of the six hot track laps, it pushed wide as it peeled the top layer off a loping downhill that leads into the front straight, a reminder that the no-helmet laps needed to end before caution took its afternoon break. It coasted down with the overrun crackles of Sport+ mode echoing into the pits, no street time allowed.

Bring things down from that hot zone, and BMW plays the reluctant warrior when it comes to space, safety, and features.

BMW sizes up the latest 3-Series in most ways, though front-seat headroom takes a hit though it sits a half-inch taller. The G20 edition measures 112.2 inches in wheelbase, up by about two inches; width is up 0.6 inches. The front seats get sporty bolstering across the board, power adjustment, firm cushions at the back and at the butt, and a thigh extender. The driving position doesn’t quite square to the steering wheel—it’s offset some for crash and visibility—but it’s able to support passengers of varying body types well.

Rear-seat passengers get just 35.2 inches of leg room—up from 35.1 inches—but leg and head room aren’t the issue. The seats sit well inboard of the doors for better crash protection, which means the wider 3-Series can’t sit three adults across very well—or even two adults if there's a third small passenger aboard. The center position belt overlaps the left-side belt when it buckles, too. The rear seats fold down for access to the large trunk, which has a regular, squared-off shape and available power assist for the decklid.

BMW fits the latest 3-Series with LED headlights and low-speed automatic emergency braking. BMW rolls full-speed emergency braking into a bundle with adaptive cruise control and active lane control, along with the ability to control the car in stop-and-go traffic. It's probably time to make full-speed emergency braking standard, as you'd find on a Camry. An optional sophisticated parking-assistance feature borrowed from the new X5 crossover SUV can remember how the 3-Series maneuvered into its spot and automatically back the car out.

Paint other than black or white costs $550; leather is $1,700. A package with keyless entry, LED headlights, satellite radio, and blind-spot monitors is $2,150; for $1,700 on top of that, BMW adds in adaptive cruise, active lane control, and traffic-jam assist. The M Sport package for $5,000 adds 19-inch wheels (225/40 front, 255/35 rear), variable sport steering, synthetic leather dash, aluminum or wood trim, and blind-spot monitors, with a $700 upcharge for adaptive dampers. Track Handling is a $2,450 option that gets M Sport brakes, sport differential, and adaptive dampers.

There’s more reluctance on display in the 3-Series’ luxury feature bundles. Heated seats, a head-up display, navigation, and Apple CarPlay compatibility live in a $2,800 premium package, which requires the $2,150 convenience package, but CarPlay and navigation can be ordered separately for $1,600; after a year, BMW's wireless CarPlay functionality costs $80 a year. Automatic high beams, gesture controls, a surround-view camera system and “Laserlight” headlights come in a $2,100 bunch.

BMW fits an 8.8-inch touchscreen to base models, while the upgraded 10.3-inch touchscreen gains navigation and a companion 12.3-inch screen for the gauge cluster. The new system has bettter recognition for natural voice commands, provided you ask it nicely: “Hey, BMW.” Of course, you can set the system to answer to any name you choose; you can be rude, or you and your 3-Series can agree on a mutually recognizable safe word before it lets you hear emails or set waypoints or play anything remotely resembling Blink-182.

The 2019 330i hits showrooms in March; the $54,995 M340i follows in the summer, complete with twin high-resolution screens, all the M Sport hardware, even NFC smartphone key support.

It’s tough to discount a new 3-Series that minds its manners as well as this one. Comers have called out the Bimmer by name time and time again—ATS, Q50, IS, and XE—and the 3-Series has tagged them all on Ariana Grande GIFs and moved on.

But that doesn’t mean the 3-Series can avoid a looming reality. The face of performance and luxury to a whole cadre of new-car buyers is no longer a compact rear-drive sedan; it’s electric, or it’s an SUV, or it’s both. That puts the thoughtfully improved 2019 3-Series in a place we'd never have imagined back in 1992. The new 3er's a paragon of virtue, but don’t hate if we remind you the best vehicle BMW makes today is another “3” series—and its first name is X.