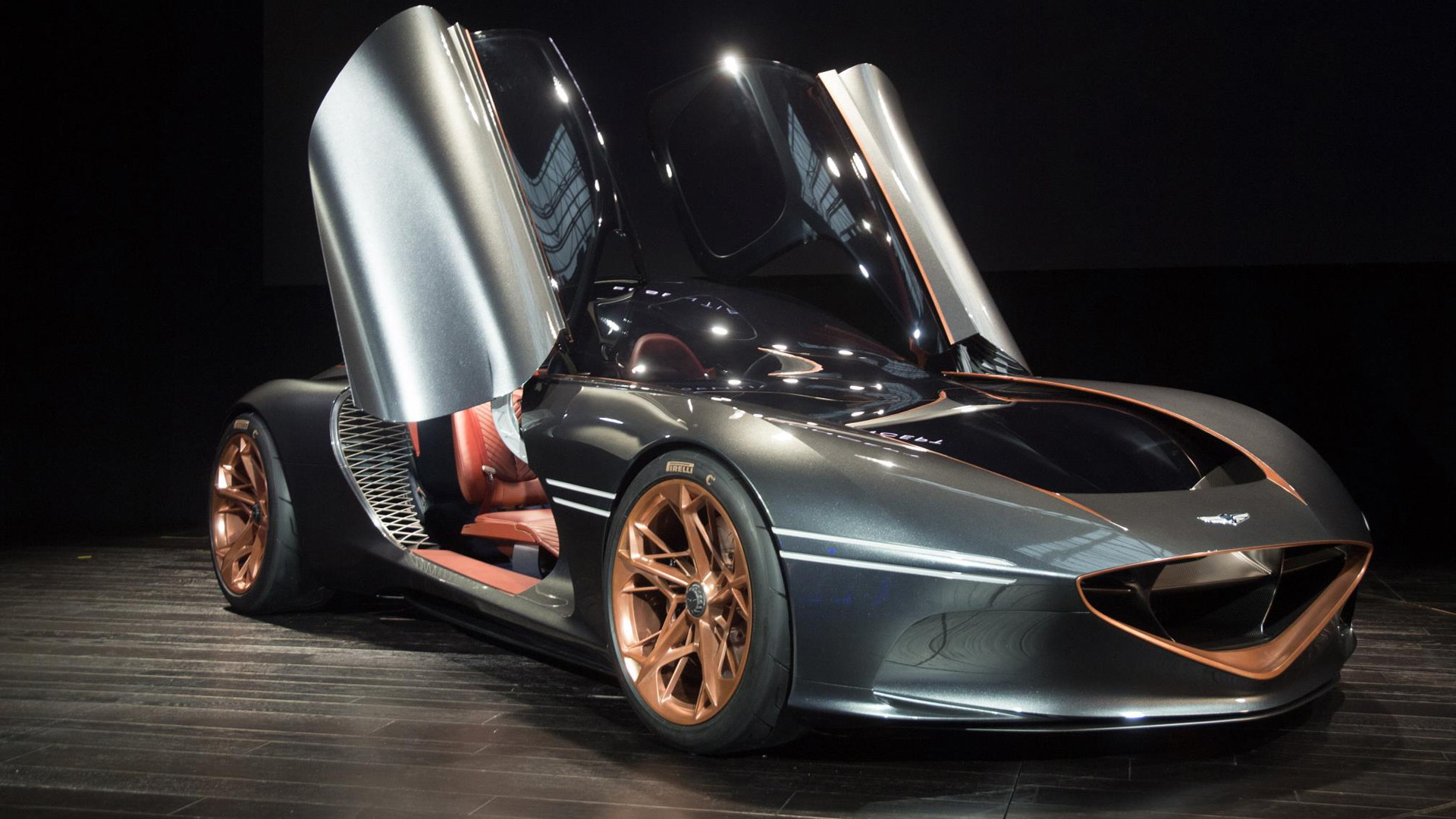 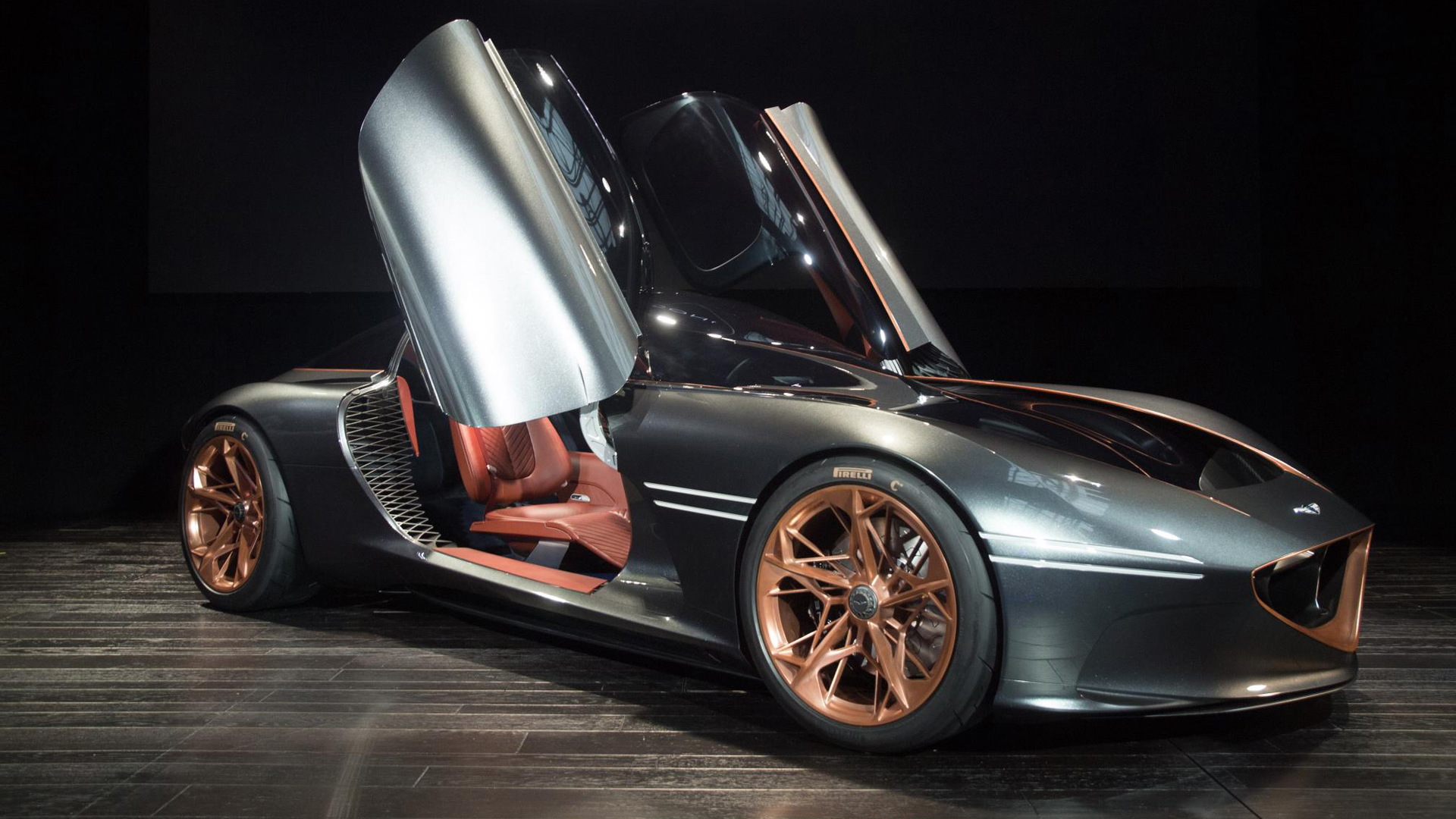 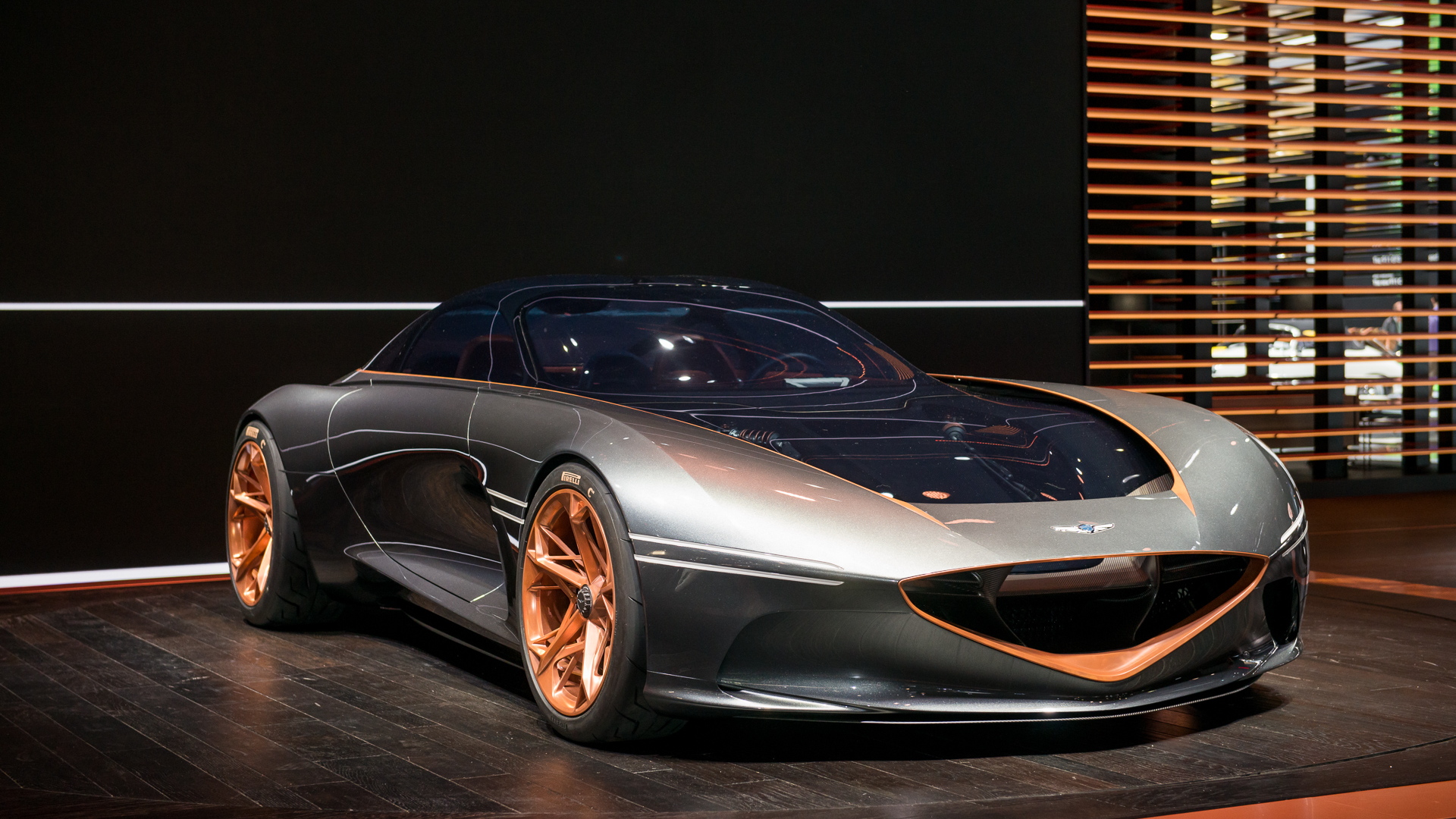 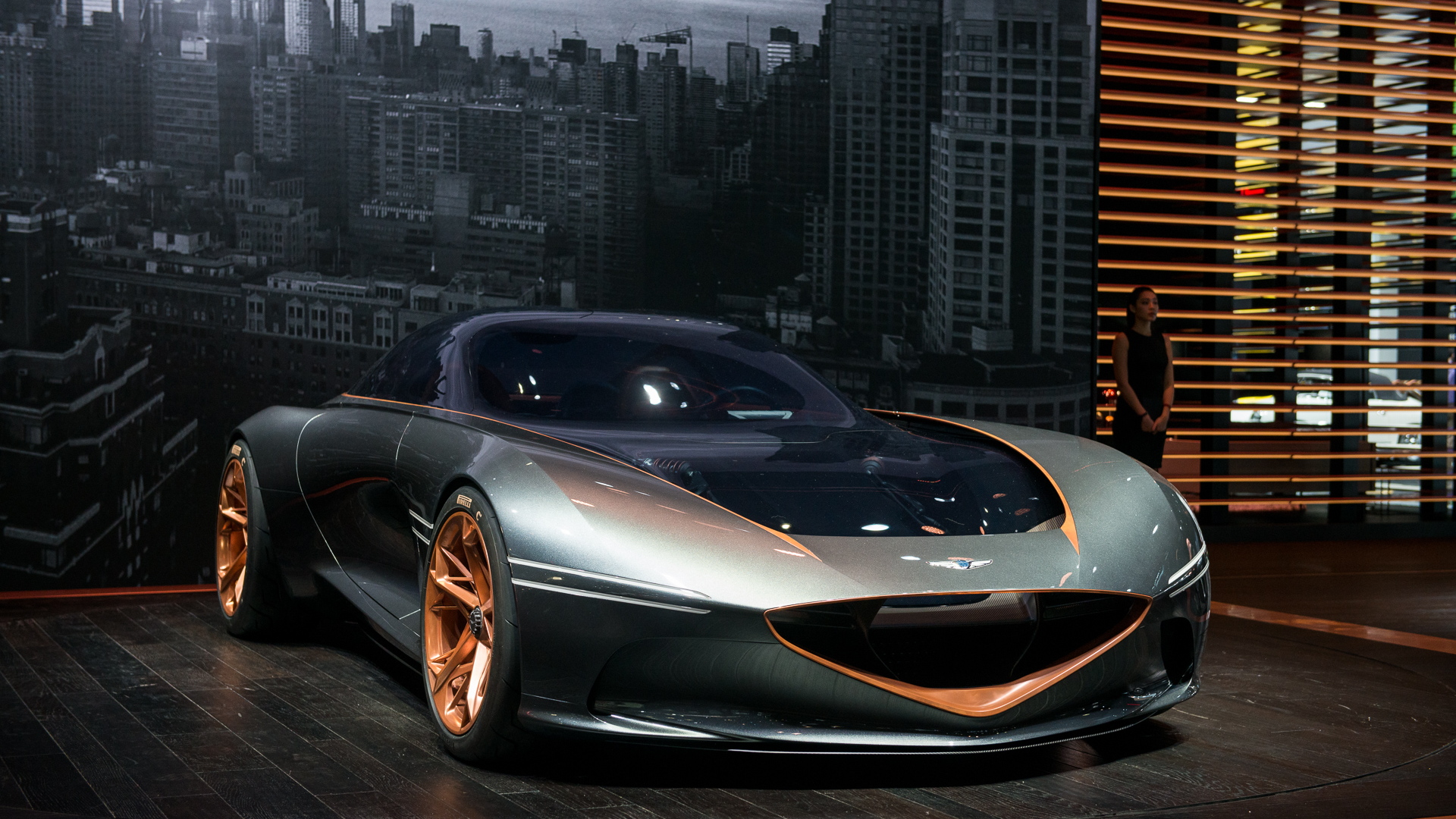 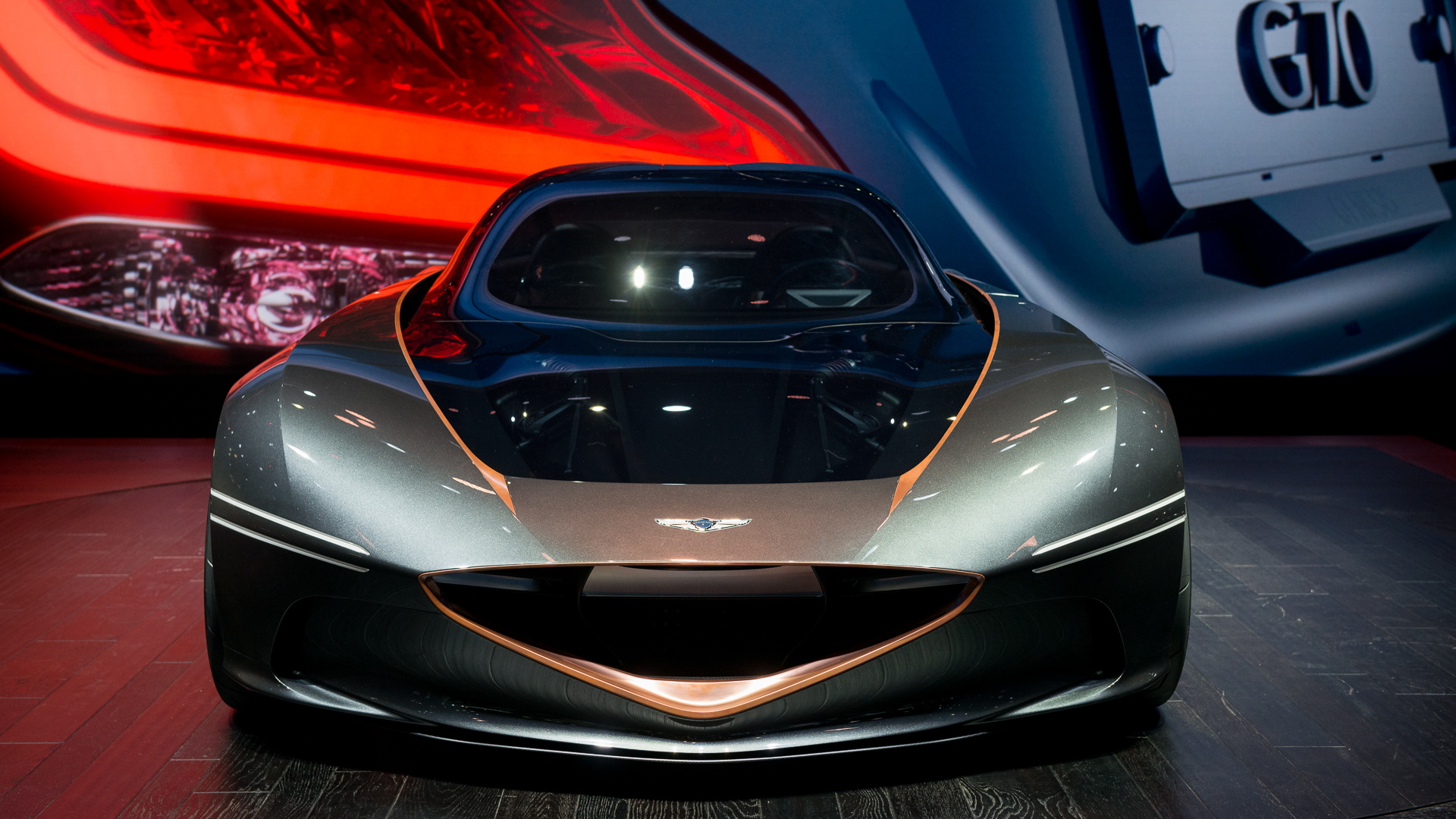 Pick two for your concept car this year: Fast, green, or coming soon.

The Genesis Essentia Concept that bowed Wednesday at the 2018 New York auto show opted for fast and green, a future look at a distant electric two-door coupe from the nascent luxury automaker.

The Essentia’s look takes familiar concepts from the automaker’s repertoire and spins them forward with a concept sheen. The design is minimal and organic, starting with the grille up front that dips lower, but not any wider, than the grilles in Genesis’ current stable. The Essentia’s body sides are wave-formed, with deep gills behind the wheel wells that’s already given inspiration to the G70 sedan.

Around back, an ovoid-shaped tail turned up at the decklid may as well sport an “Aston Martin” badge, according to our eyes. It's a convincing fascimile of a two-door grand-touring car, should that ever vault into popularity with luxury buyers again.

Beyond the exterior lines, the Essentia concept is battery powered and built for cruising. Despite the Essentia’s grand-tourer shape, Genesis envisions a 3.0-second 0-60-mph time, and exposed pushrod suspension inspired by Formula 1 and glam in equal parts.

Genesis didn’t specify cruising range, driven wheels, or basic powertrain specs, only that electrification figured into the future of the brand.

Inside, the typical concept car minimalist gewgaws and thin steering wheel are around. An 8.0-inch driver information display might be ready for primetime along with an infotainment controller in the console.

For those wondering why an electric car has a driveline tunnel: it’s where the batteries are. Hyundai didn’t say how many a coupe like the Essentia would need but said that the low battery placement gave the coupe a 50-inch-tall roofline.

It’s unlikely that Genesis builds the Essentia—or anything like the Essentia—in the next couple years, however. The brand has a bevy of SUVs and crossovers to launch in the near-term, although long-term plans do call for a coupe on the menu.

What’s likely sooner is that a few pieces and electric driveline components take shape in Genesis sedans and SUVs first.

Donckerwolke’s designs for a new front and rear end may appear on a slew of new models from the brand, including SUVs and crossovers. Reports say that Genesis could have an electric vehicle ready around 2021.

For more news about the 2018 New York auto show, head over to our dedicated hub.