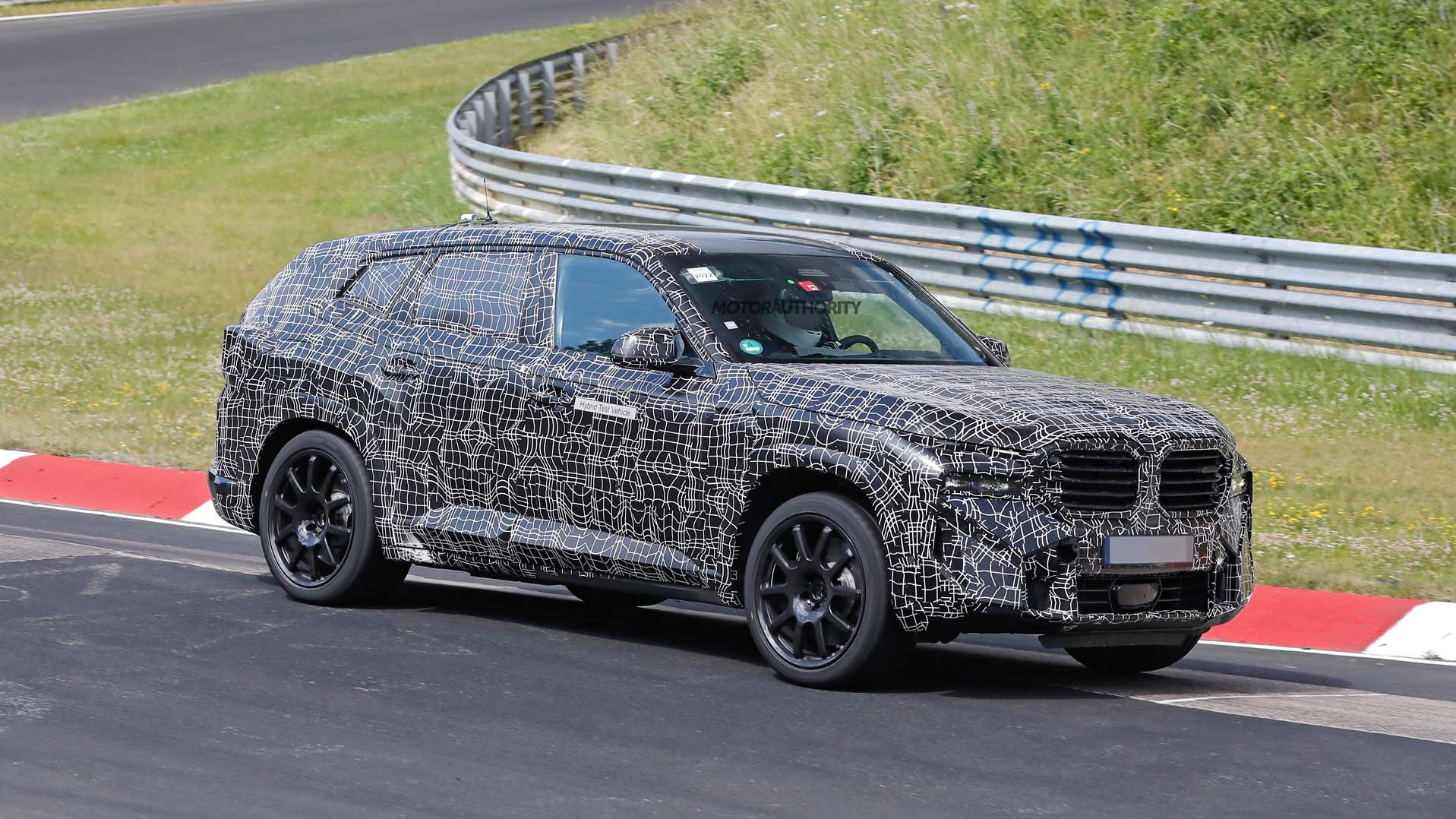 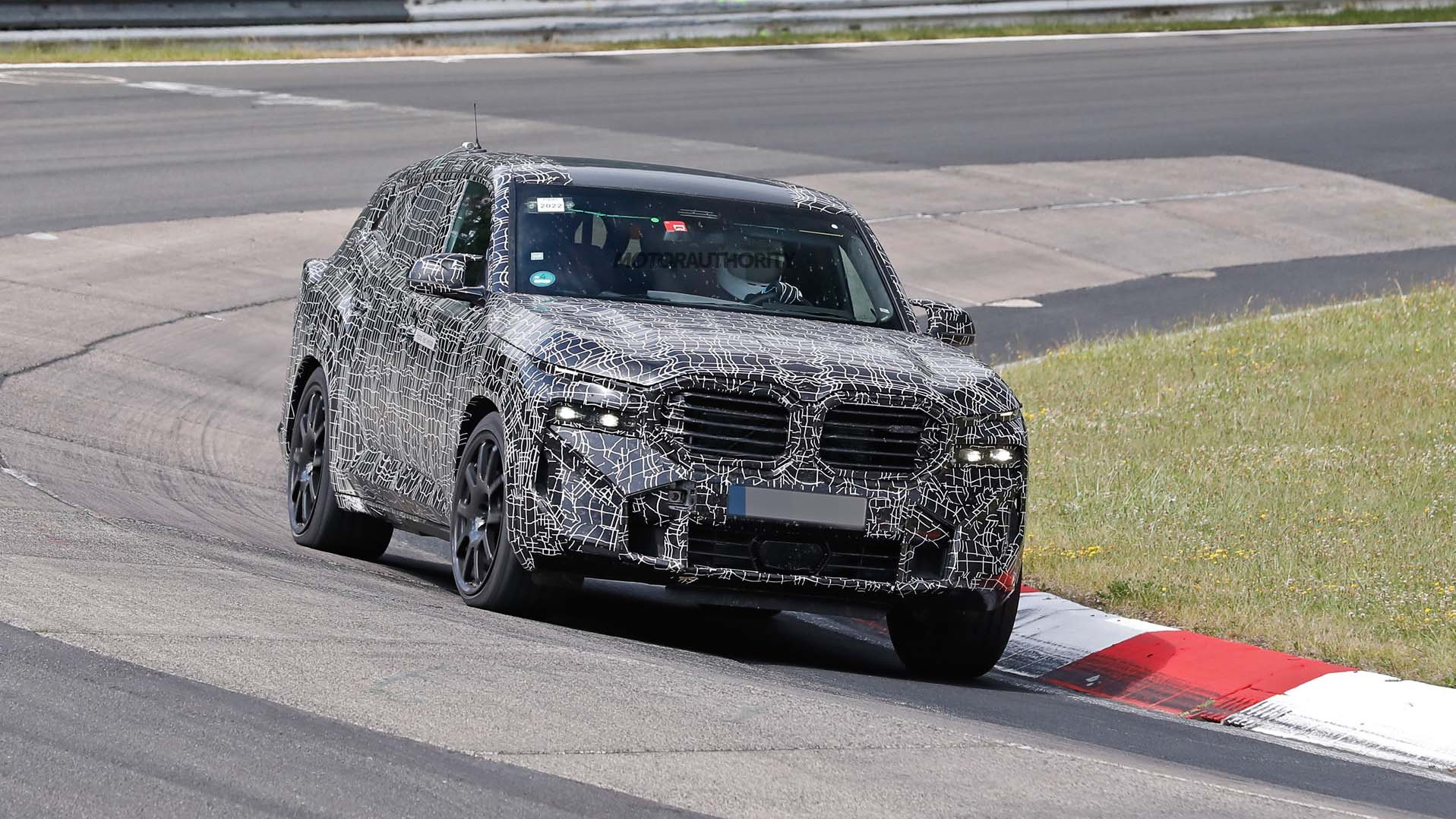 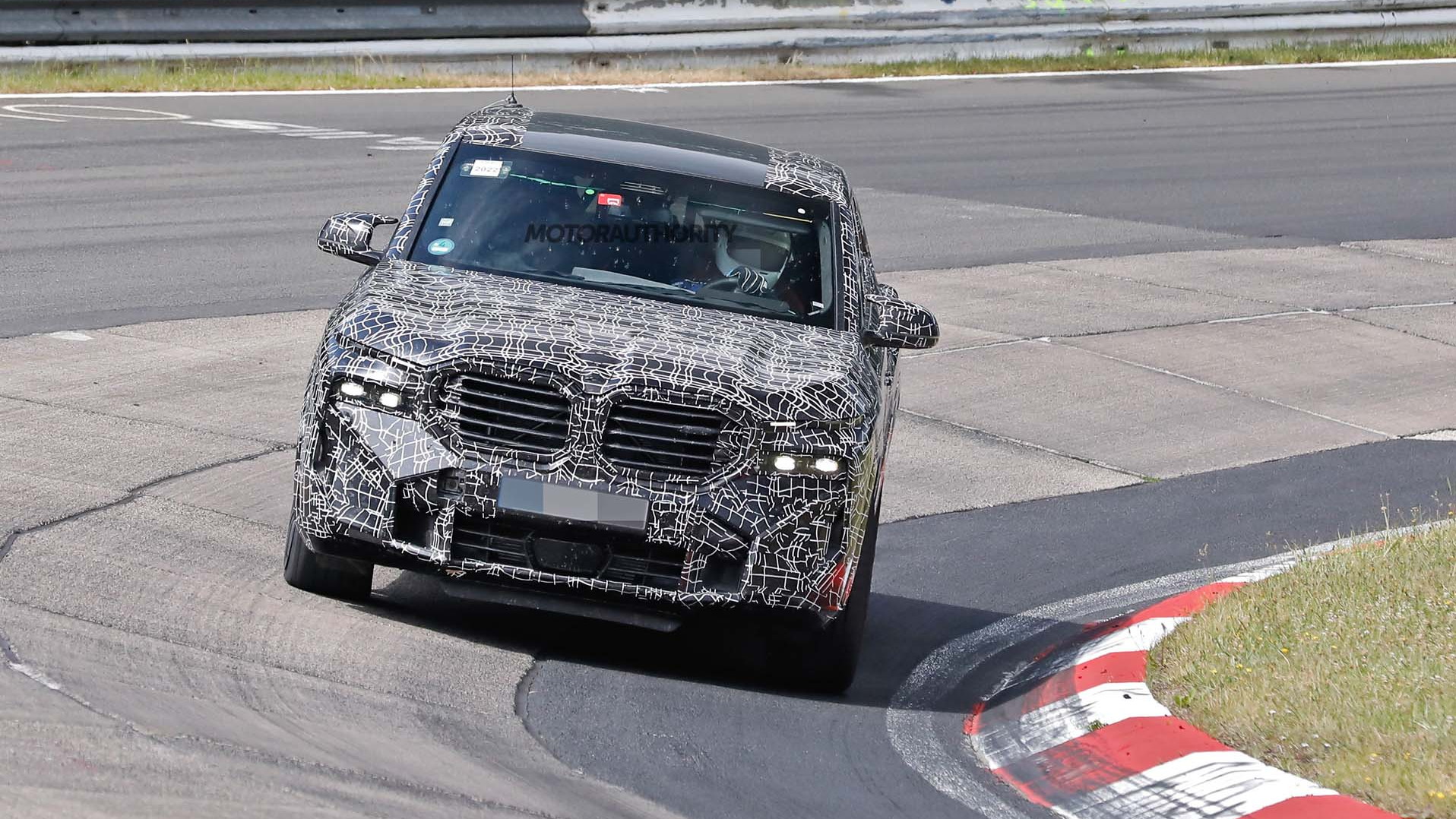 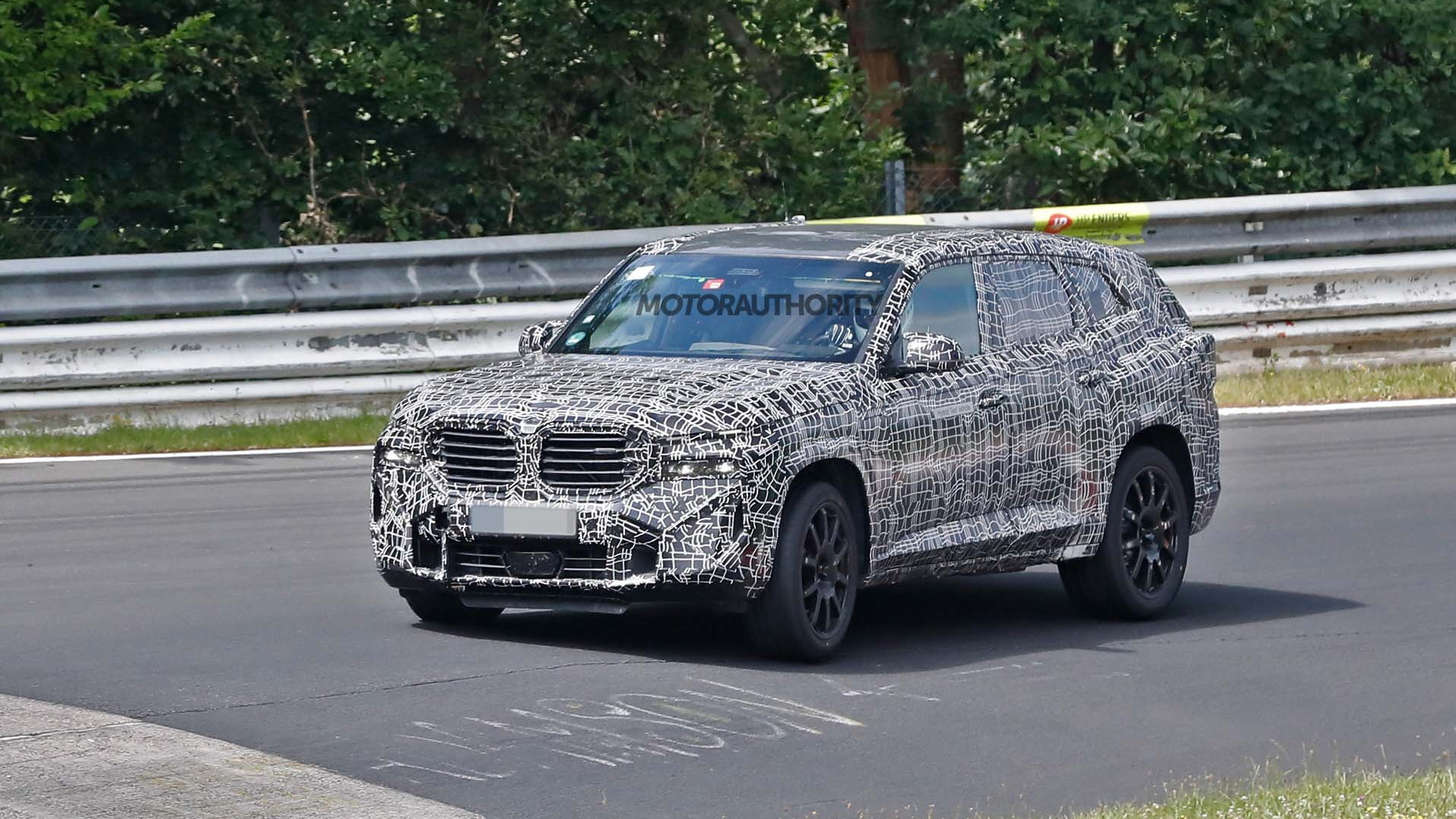 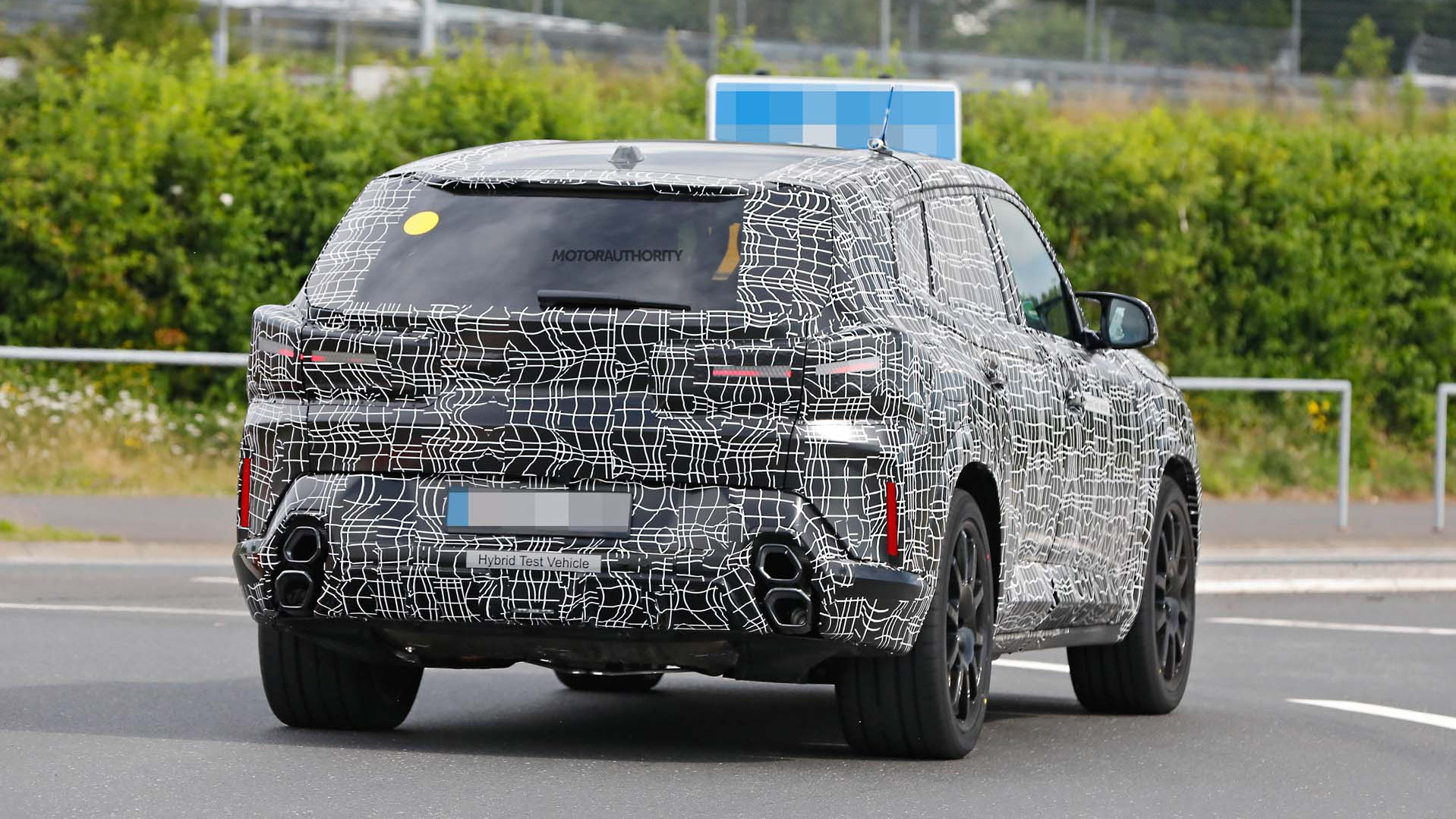 A prototype for the production version of BMW's Concept XM has been spotted again, confirming that the two vehicles will be very similar in design.

The XM is a new flagship SUV closely related to the X7, with the wheelbase common to both models. And as indicated by the name, the XM is a dedicated BMW M model, the first since the M1 launched more than four decades ago. The XM will arrive later this year to mark the 50th anniversary of the founding of BMW M, meaning we should see it arrive as a 2023 model.

There's still a lot of camouflage gear but we can already make out the shape of the grille. You'll also notice that there's a thin strip of lights at the leading edge of the hood, just like on the concept, but instead of the concept's roof-mounted lights the production XM features its secondary lights lower down the front fascia. This new split-headlight design will be shared with BMW's redesigned 2023 7-Series and updated 2023 X7.

At the rear, the roof-mounted spoiler keeps the twin-peak design of the concept, though in toned down fashion. The design motif is a nod to the M1's rear, with the concept even sporting a small BMW logo on each of the peaks. Also common with the concept are the stacked exhaust tips on either side of the rear diffuser insert.

We can't see the interior but expect a similar design to the concept here, too. This means screens for the instrument cluster and infotainment system will be joined and feature a floating design, something we first saw in the iX. The concept featured two individual seats at the rear, though perhaps a three-seat bench option will be offered on the production model.

We know the powertrain will be a plug-in hybrid setup utilizing a newly developed 4.4-liter twin-turbocharged V-8 as the internal-combustion component. Combined output will be in the vicinity of 750 hp and 737 lb-ft of torque, which will make the XM the most powerful BMW road car to date. If the engineers go with BMW's existing plug-in hybrid design, a single electric motor will be sandwiched between the V-8 and transmission.

BMW told Motor Authority at the Concept XM's reveal that a battery with more than 20 kilowatt-hours of capacity will provide some decent electric range.

Though it's yet to be confirmed, a tamer version of the plug-in hybrid setup could be offered in a base XM, with the 750-hp version reserved for something like an XM Competition model.

The M division has already hinted at an electrified future with 2019's Vision M Next concept, a plug-in hybrid supercar that sadly no longer looks to be production-bound. BMW's in-house tuner and motorsport division is also developing battery-electric powertrains. The first of these is the 536-hp setup in the i4 M50. An iX M60 has also been launched, and we've heard that the next M5 due around 2024 may come with the choice of plug-in hybrid or battery-electric power. Stay tuned.