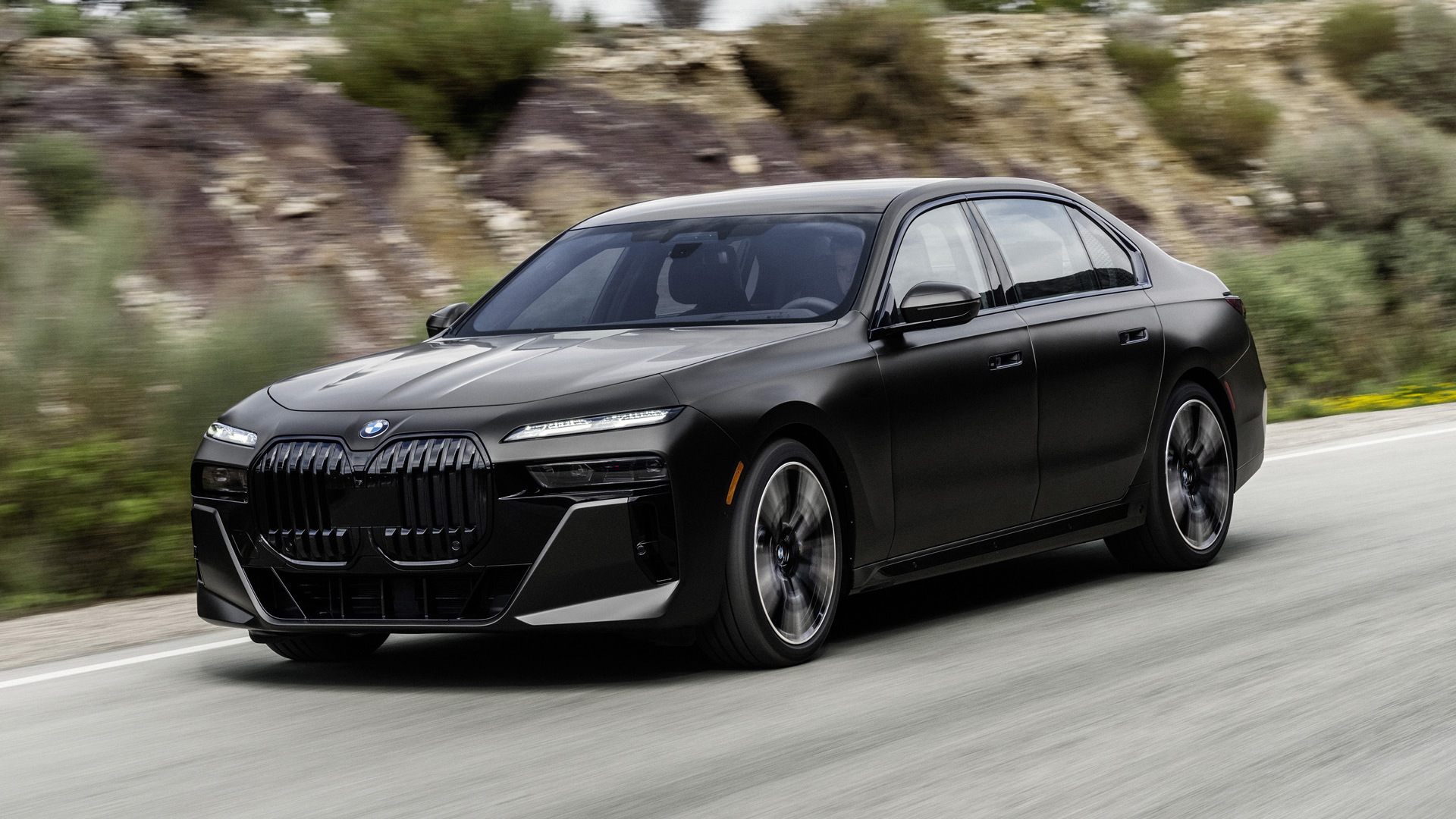 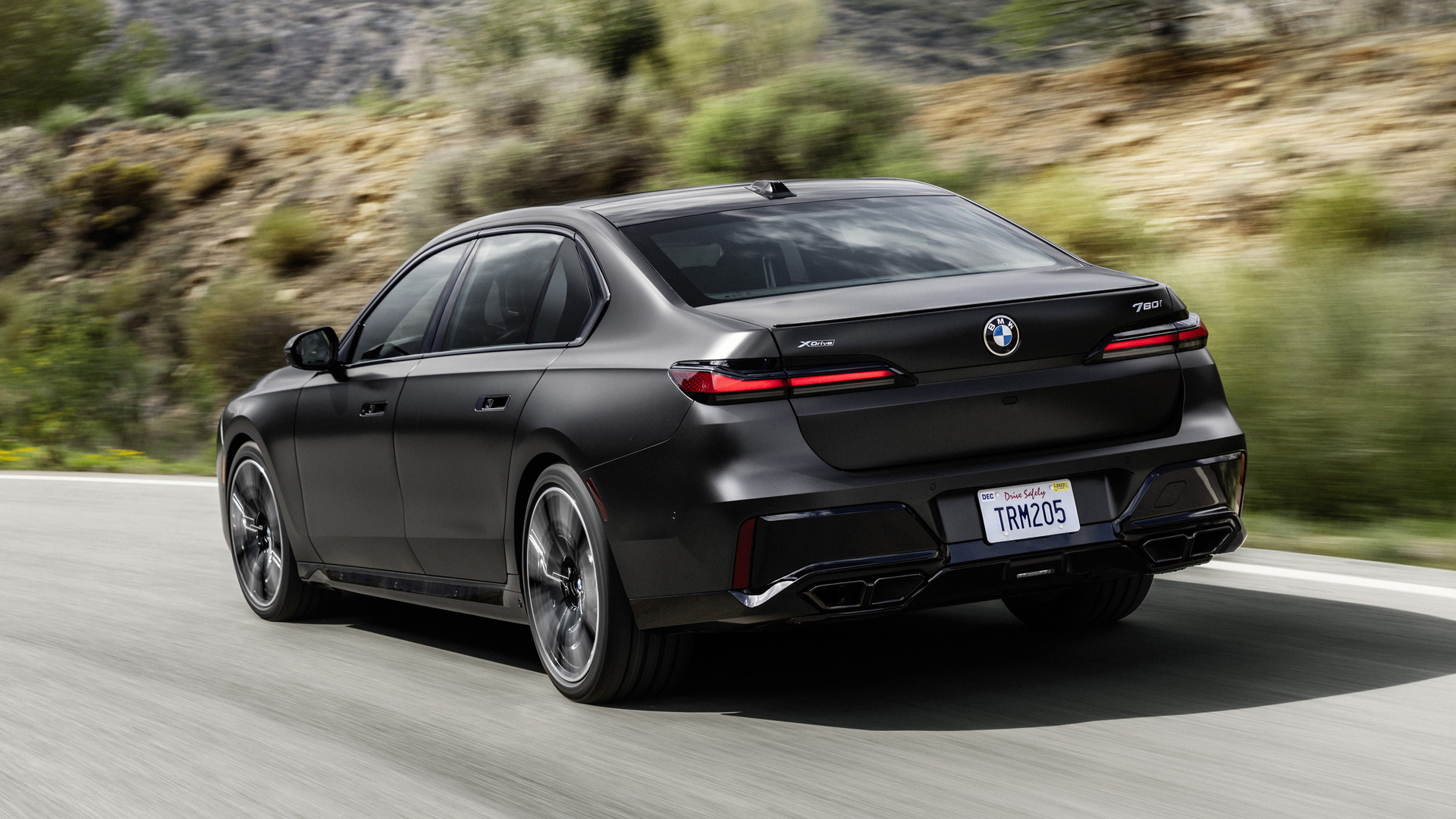 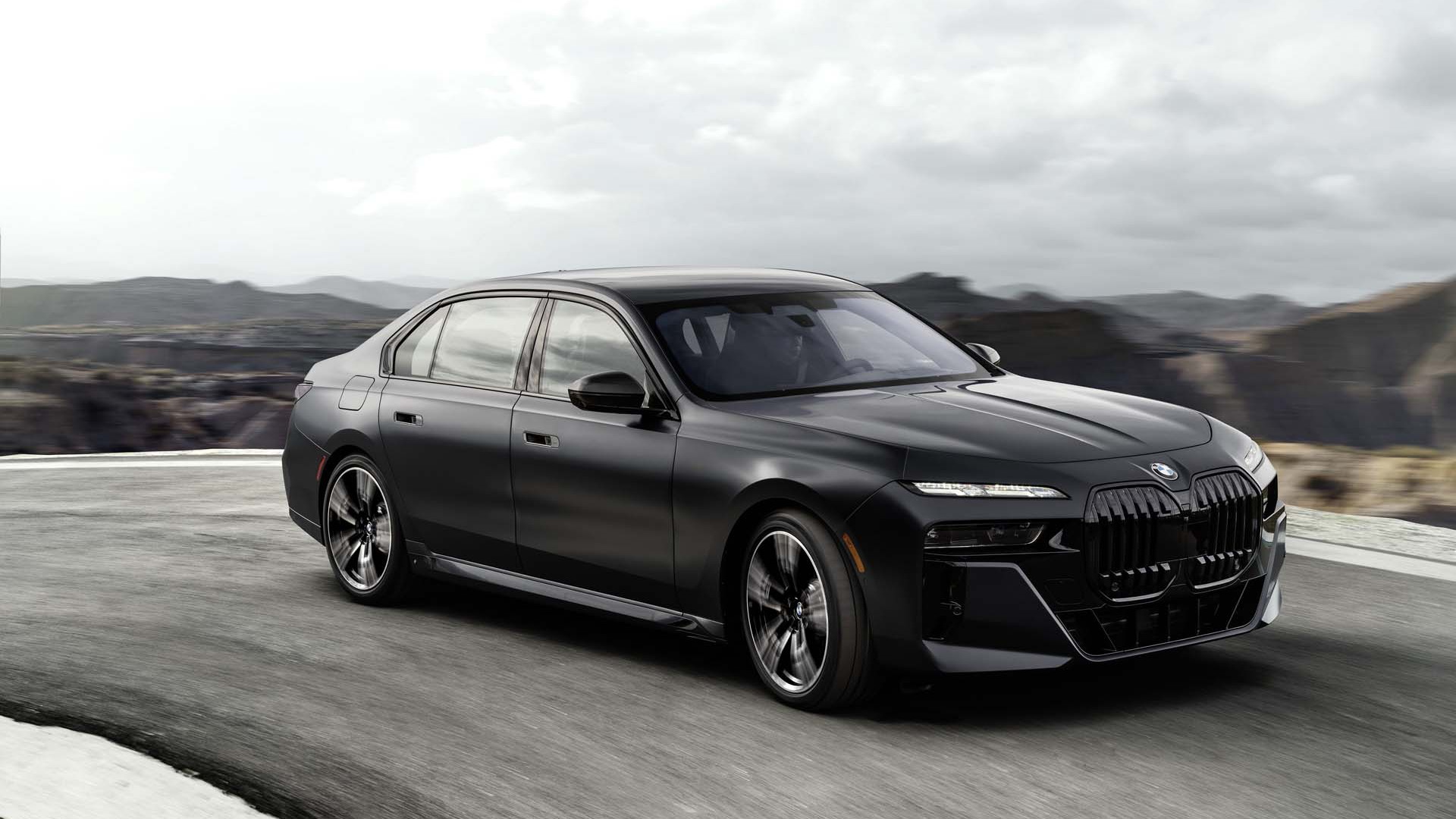 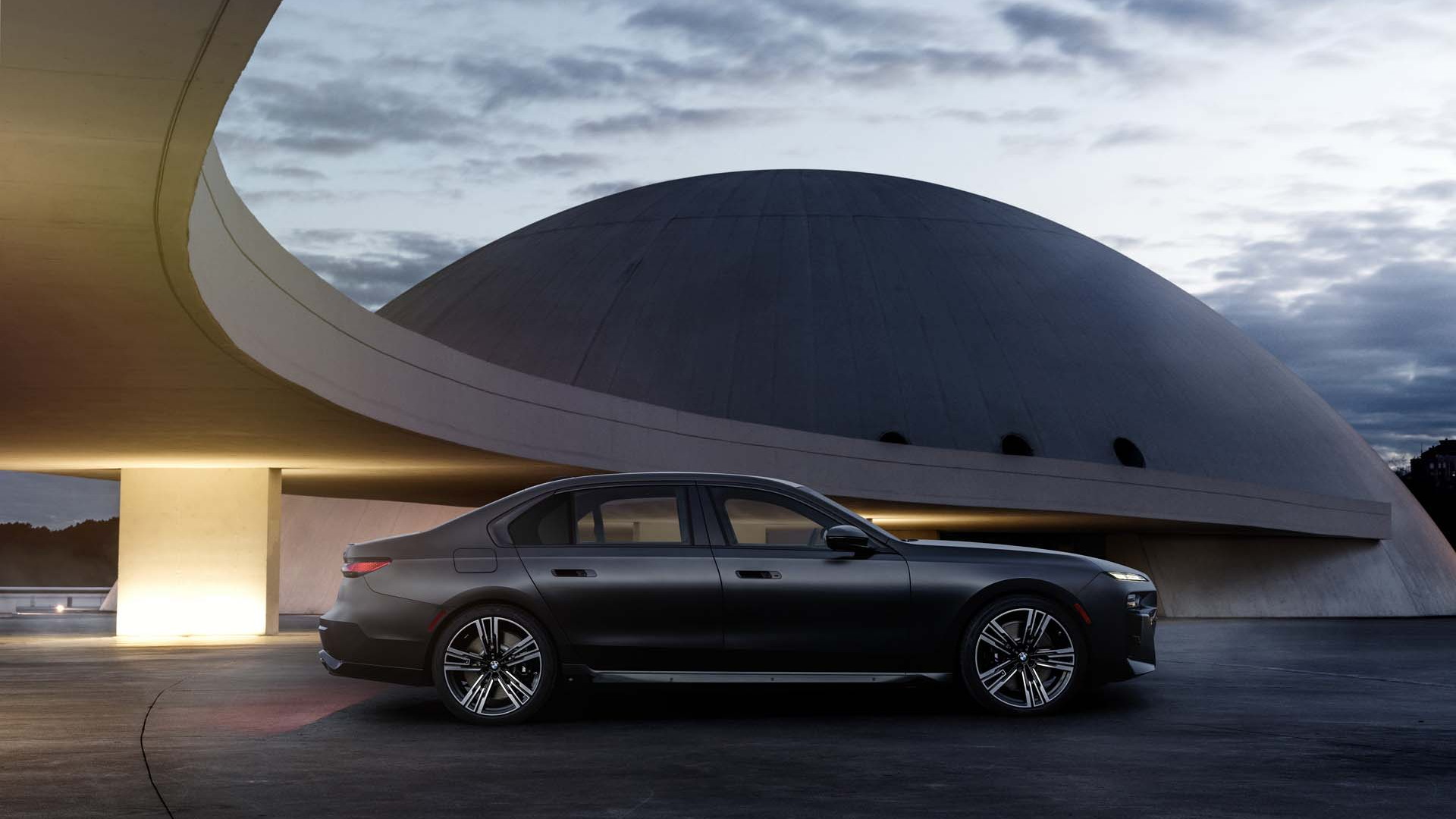 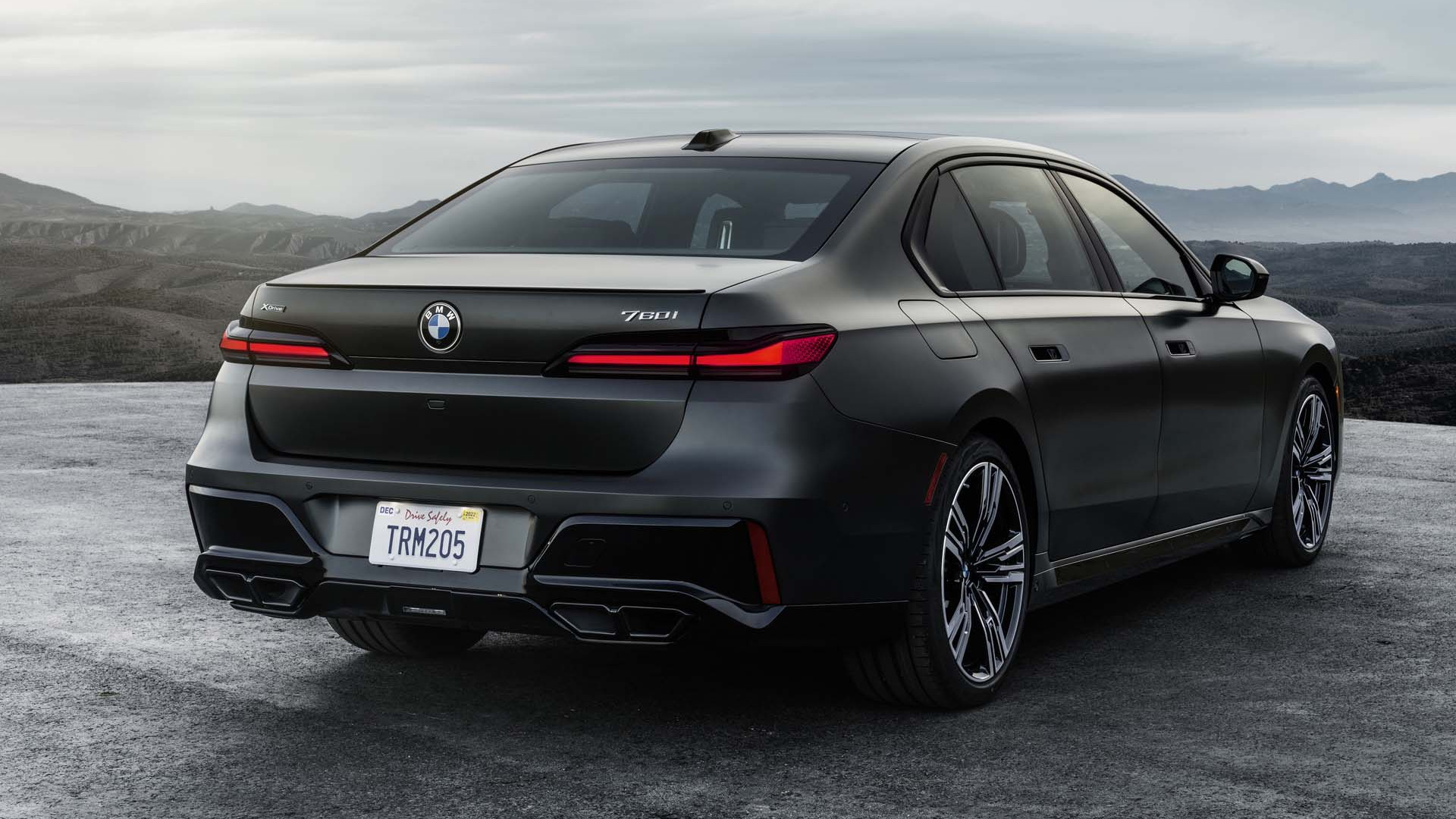 BMW's 7-Series has entered its seventh generation with a bold new look, high-tech cabin, and for the first time the choice of an electric powertrain.

The redesigned 7-Series is confirmed to reach dealerships late this year as a 2023 model, with prices starting from $94,295, including a $995 destination charge.

Just three grades will be available, including the electric grade which will be a flagship known as the i7 xDrive60. The internal-combustion grades will be the 740i and 760i xDrive, both with mild-hybrid setups.

The looks are sure to be polarizing. The front is dominated by a large grille whose surround is illuminated, and there are also the same split headlights BMW introduced on the updated 2023 X7. The design of the headlights, which is also destined for a standalone BMW M SUV to be known as the XM, is reserved for BMW's top-end models. The taillights feature a new take on BMW's traditional L-shape, and we're told the sedan now measures 212.2 inches in length, which is 5.1 inches longer than before. Despite the increase, the wheelbase is only up 0.2 inches at 126.6.

The interior follows a more luxurious route than past generations, with the driver greeted by a 12.3-inch digital screen for the instrument cluster which then joins a second 14.9-inch screen for the infotainment, with both units contained in a curved floating panel. There's also an available 31-inch screen with 8K resolution that descends from the roof to provide a theater-like experience for rear-seat passengers. It features built-in Amazon Fire TV.

A cool feature of the cabin is what BMW calls the Augmented View. This feature reproduces a live video stream of the front view via the instrument cluster, but with an overlay of relevant information, such as navigation instructions and even local parking regulations. Gesture control also features, alongside voice activation and physical controls. BMW also hired popular Hollywood composer Hans Zimmer to craft some of the sounds for the new 7-Series' cabin.

The redesigned 7-Series is based on an updated version of the outgoing car's CLAR platform, with the latest version capable of supporting multiple powertrain types. The i7 xDrive60 electric grade features a dual-motor all-wheel-drive system delivering a peak 536 hp and 549 lb-ft of torque, or enough for 0-60 mph acceleration in about 4.5 seconds. The top speed is capped at 149 mph. The battery has a usable capacity of 101.7 kilowatt-hours, which BMW estimates will deliver up to 300 miles of range.

The entry-level 740i features rear-wheel drive and is powered by a 3.0-liter turbocharged inline-6 with a mild-hybrid setup. The inline-6 delivers a peak 375 hp and 383 lb-ft, though the torque figure can be increased to 398 lb-ft temporarily thanks to a mild-hybrid boost. Owners can expect a 0-60 mph time of about five seconds.

The 760i xDrive features all-wheel drive and is powered by BMW's new 4.4-liter twin-turbocharged V-8, also with a mild-hybrid setup on board. Thanks to 536 hp and 553 lb-ft of torque, this grade will sprint to 60 mph from rest in only 4.2 seconds.

Sadly, a V-12 option won't be on the menu this time around.

When it comes to ride and handling, the redesigned 7-Series benefits from a wider track (up 1.9 inches at the front and 0.16 at the rear) compared to its predecessor, as well as standard air suspension with automatic self-levelling and adaptive dampers. All-wheel steering is also included (available on the 740i), as is active roll stabilization.

Also worth a mention is a new driver-assist feature known as the Highway Assistant. It can handle structurally separated roads at speeds up to 80 mph on its own, or double what was previously possible in a BMW, but the driver needs to monitor the road ahead and be ready to take back control at all times. This ranks the system at Level 2 on the SAE scale of self-driving capability, though BMW has hinted that the redesigned 7-Series will eventually feature Level 3 capability. This level means a car that can handle itself in set conditions, enabling the driver to let go of the steering wheel and even look away from the road briefly. However, it still requires the driver to be ready to take back control at a moment's notice. BMW is developing its self-driving technology with Intel's Mobileye division.

Pre-orders for the 2023 7-Series are now open. Full pricing information is as follows:

All figures include a $995 destination charge.

For more on the BMW 7-Series, read the in-depth reviews at The Car Connection.