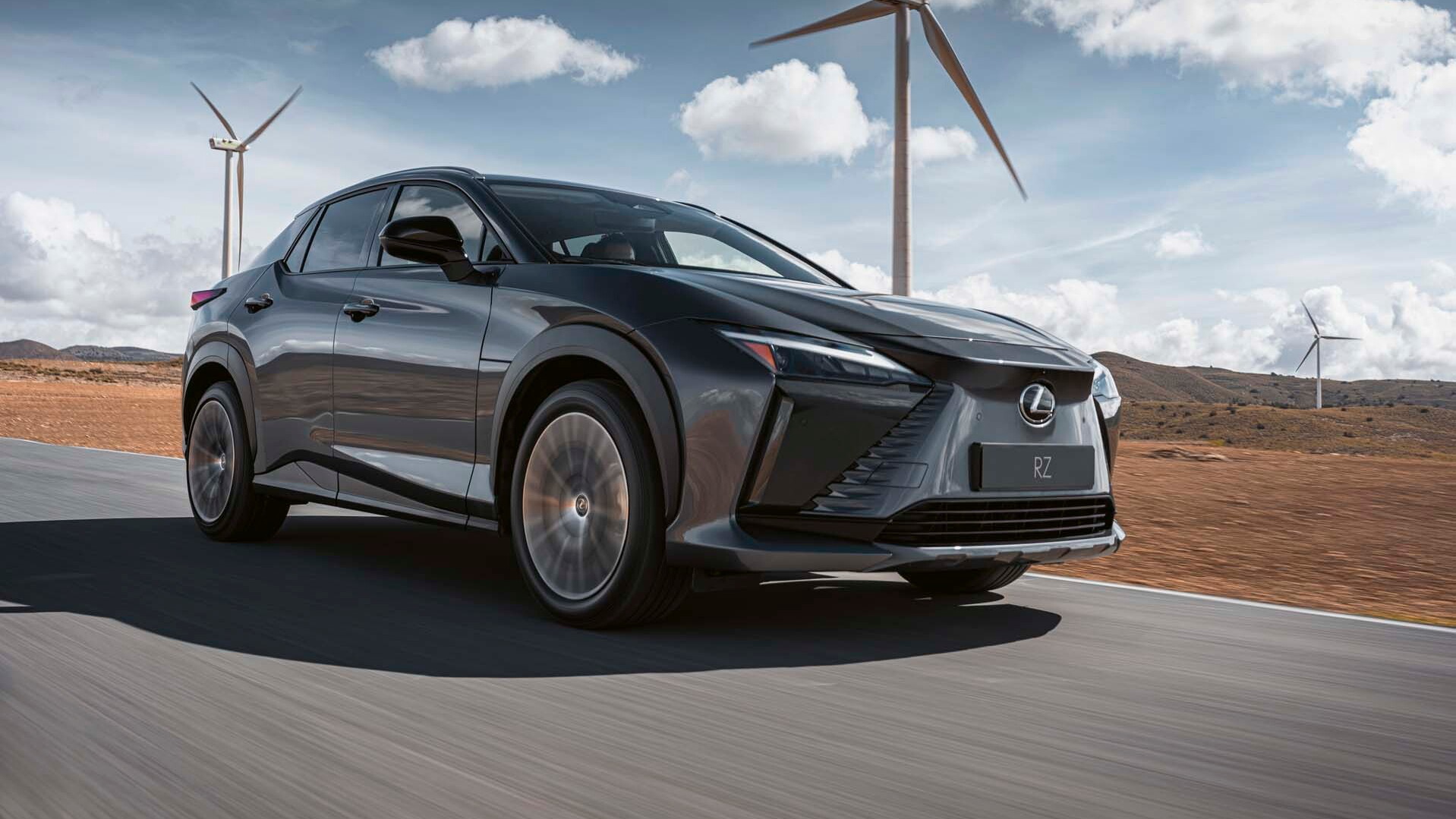 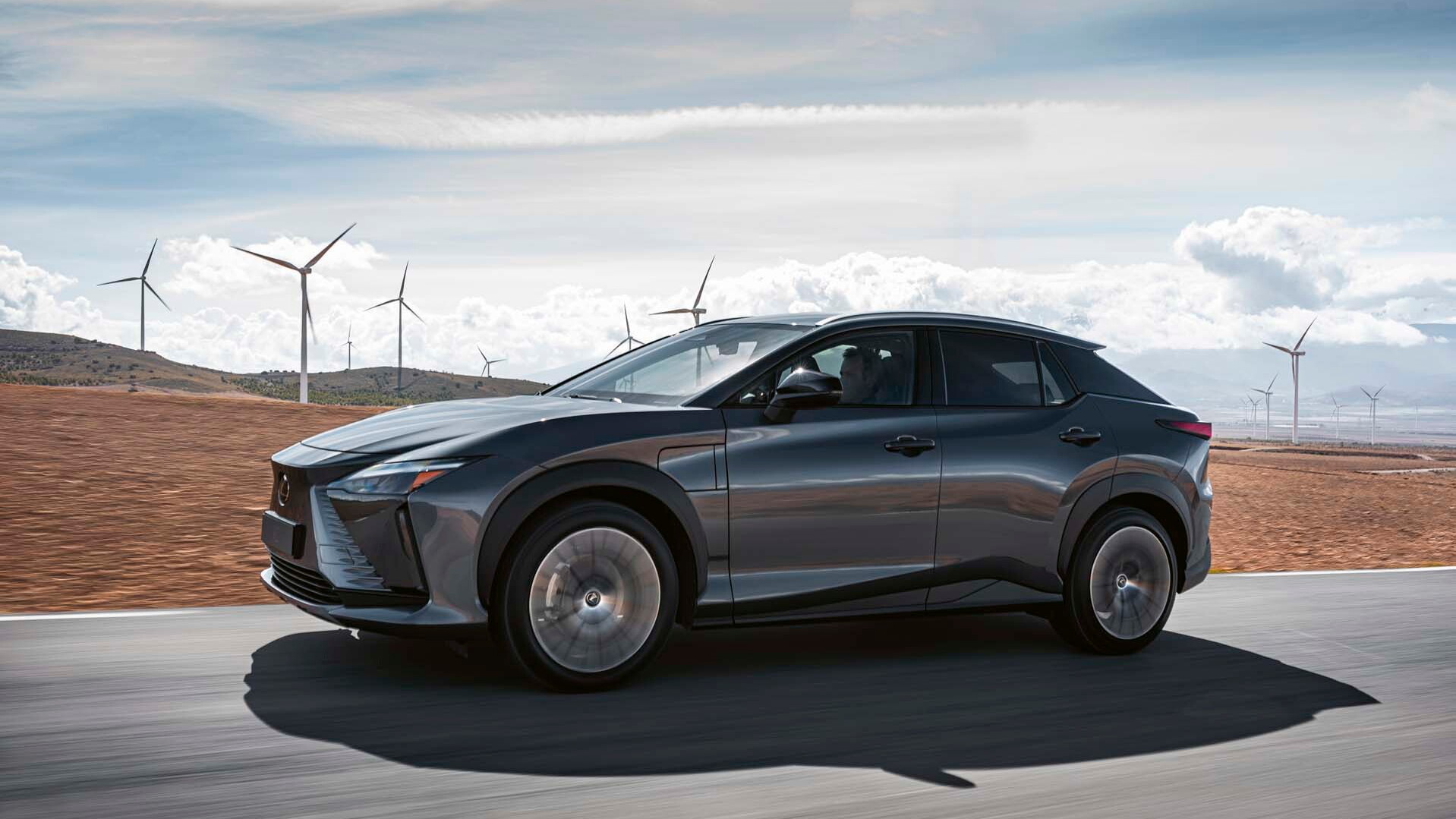 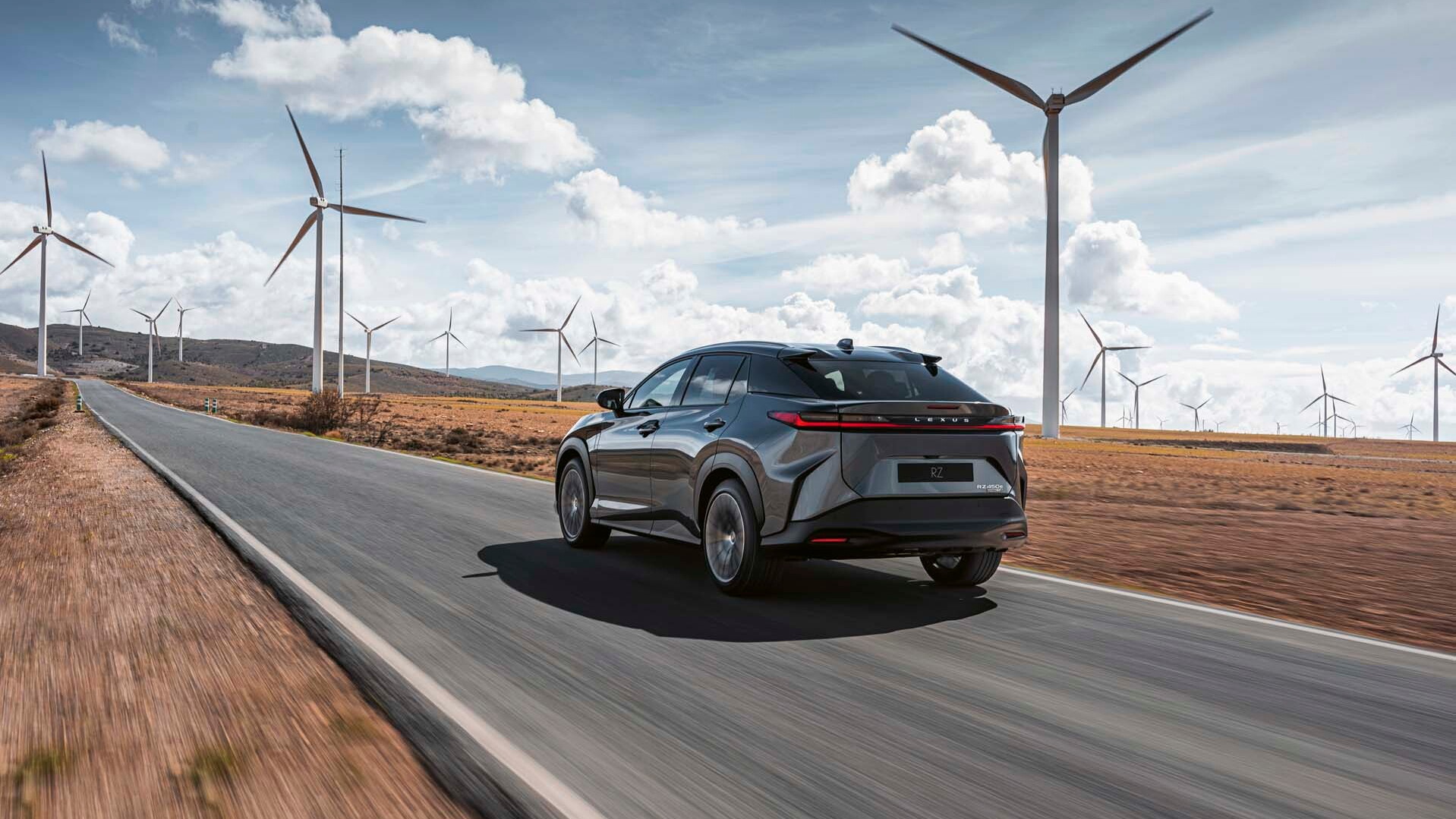 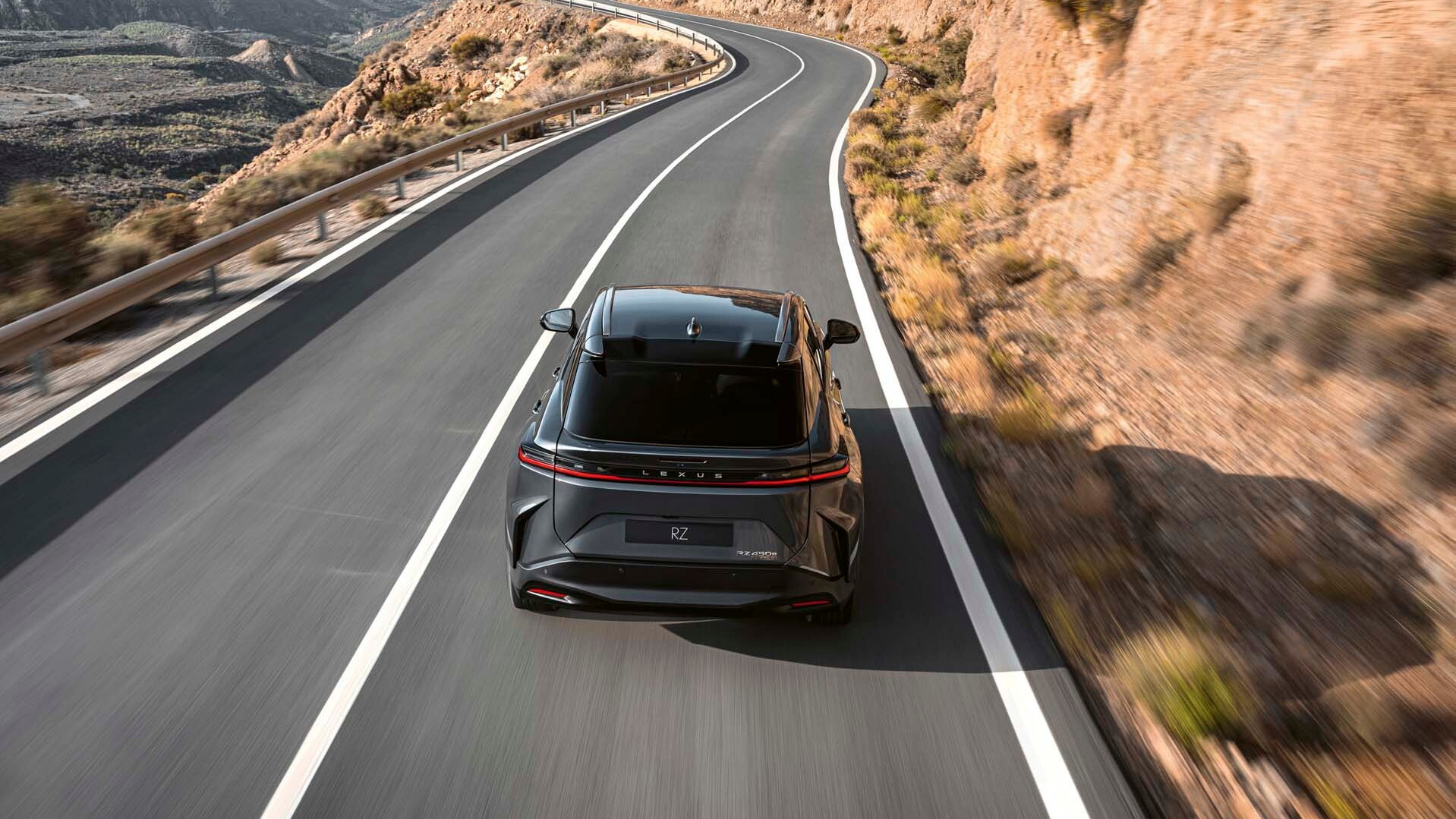 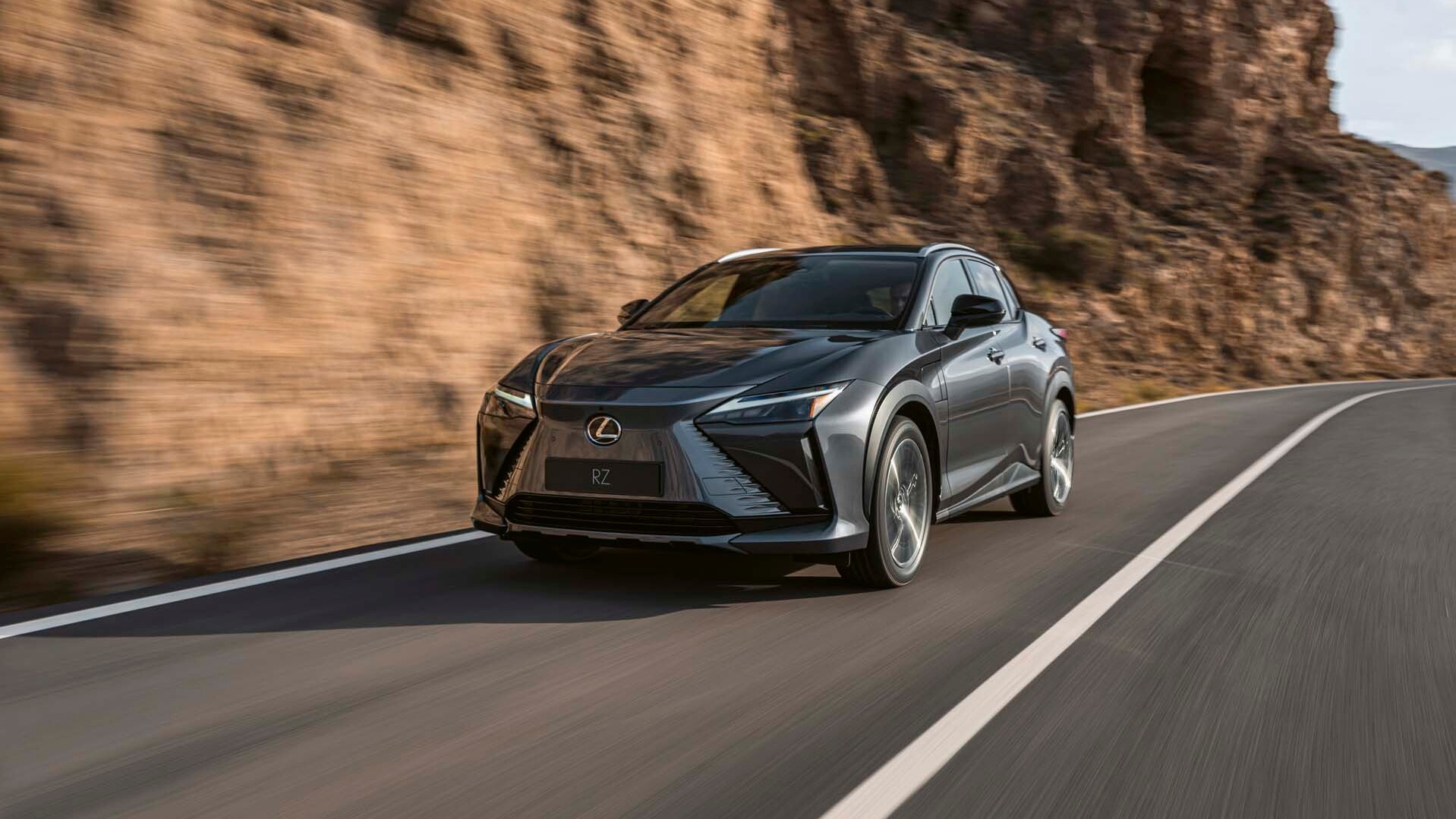 Lexus on Wednesday unveiled the 2023 RZ, the automaker's first dedicated electric vehicle, and its first EV destined to be sold globally.

The RZ isn't Lexus' first EV. That honor goes to an electric version of the UX compact crossover that Lexus has been selling overseas since 2019.

The RZ is a small crossover, and we'll see it land at dealerships late this year. It will arrive in a single RZ 450e grade equipped with a dual-motor all-wheel-drive system and 71.4-kilowatt-hour battery. Lexus estimates a range of 225 miles, and while the automaker doesn't give a combined output, it has confirmed the RZ 450e's front motor generates a peak 201 hp and the rear a peak 107 hp.

The RZ rides on the same e-TNGA platform found in the 2023 Toyota BZ4X and its 2023 Subaru Solterra twin. In addition to having more power (the Toyota and Subaru top out at 214 hp), the RZ is further differentiated via unique tuning of the all-wheel-drive system. Lexus calls its system Direct4, and says the system automatically adjusts torque going to each of the axles to optimize driving feel and stability.

The system uses wheel vehicle speed, acceleration, and steering angle sensor information to control drive torque between axles, and can completely switch off power at an axle in some situations, helping to boost efficiency. During acceleration, the torque split remains in the 60:40 and 40:60 range to help minimize vehicle pitch. When the steering wheel is turned to enter a corner, the torque is biased to the front wheels to improve response and steering feel, and when exiting the corner the torque is biased to the rear wheels to improve traction while controlling vehicle pitch.

Lexus said the RZ will eventually be offered with a steer-by-wire system, including here in the U.S. Here, the traditional mechanical connection between the steering wheel and tires is replaced by electric systems, with the RZ's complete steering angle—lock-to-lock—to be about 150 degrees. This will enable a yoke steering wheel to be installed, as just one hand will be required for tight turns.

A conventional steering wheel will be the only option at launch, at least in the U.S. The rest of the dash design appears relatively rudimentary, incorporating a 14-inch touchscreen already offered in the NX. Voice commands can also be used to control various functions in the RZ.

On the outside, a sealed-off body panel replicates the Lexus spindle grille up front, while at the rear there is an LED light bar spanning the width and joining each of the taillight clusters. Buyers will have five exterior colors to choose from, as well as a new two-tone option where the hood and roof are painted black.

Pricing information for the 2023 Lexus RZ will be announced closer to the market launch late this year.

Lexus is committed to EV technology. The brand plans to have an EV option in each segment that it competes in by 2030. It also wants 100% of its sales to be EVs in the U.S., Europe and China by that same date, and the rest of the world by 2035. We got a look at some additional Lexus EVs in the works during a presentation last December. Among them were an LFA-inspired supercar, a mid-size SUV, and a sport sedan with related convertible and wagon variants.