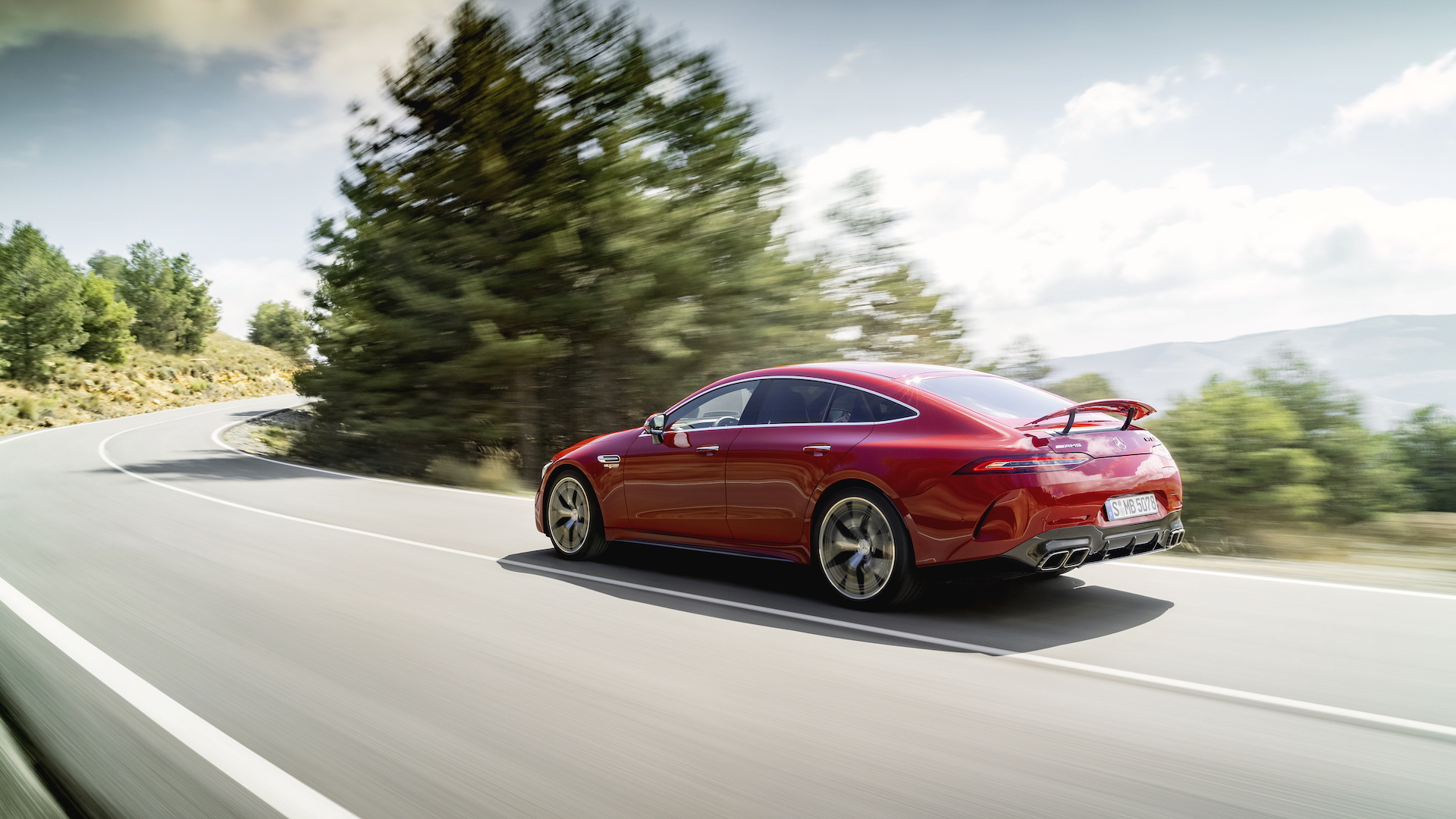 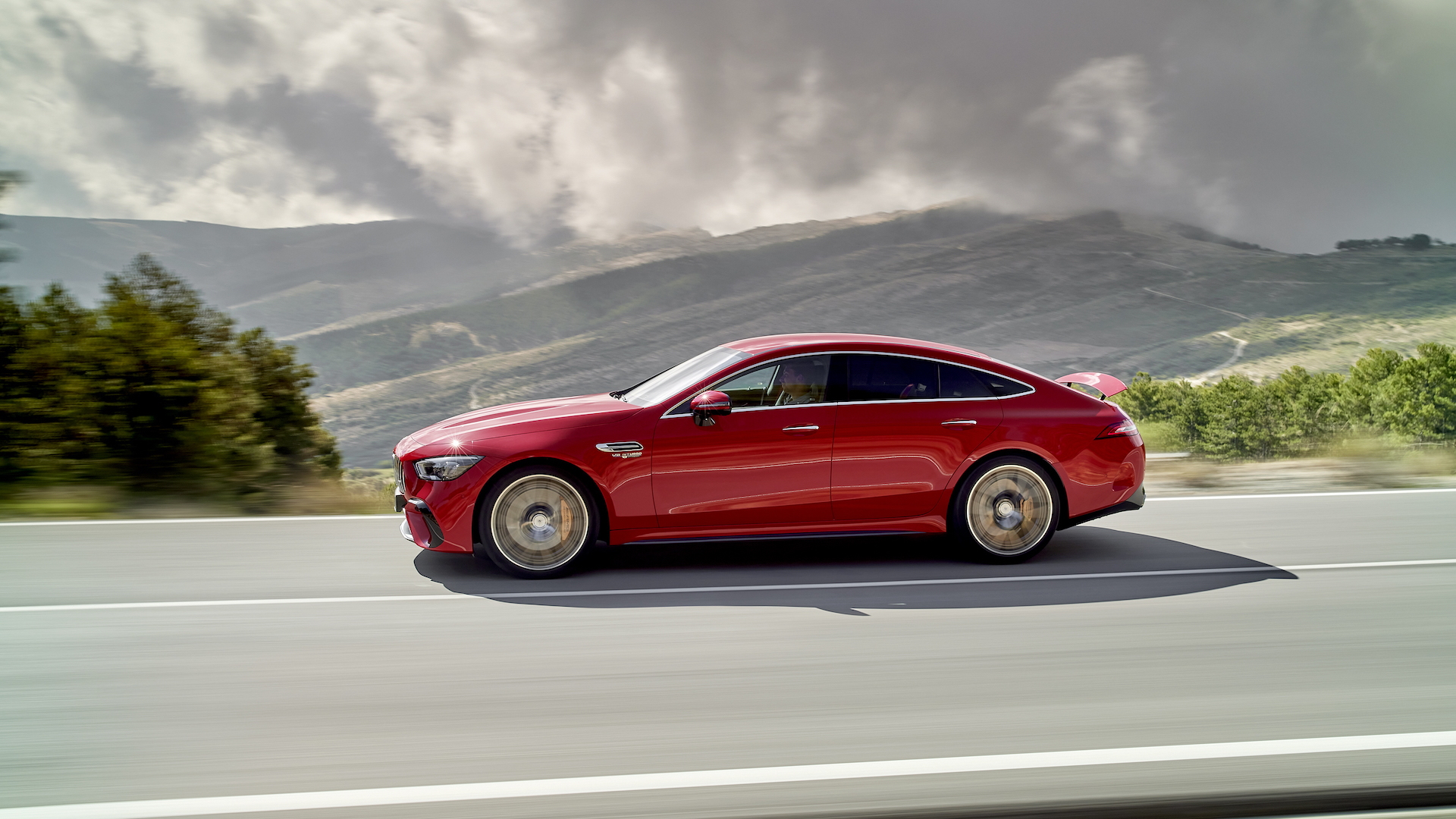 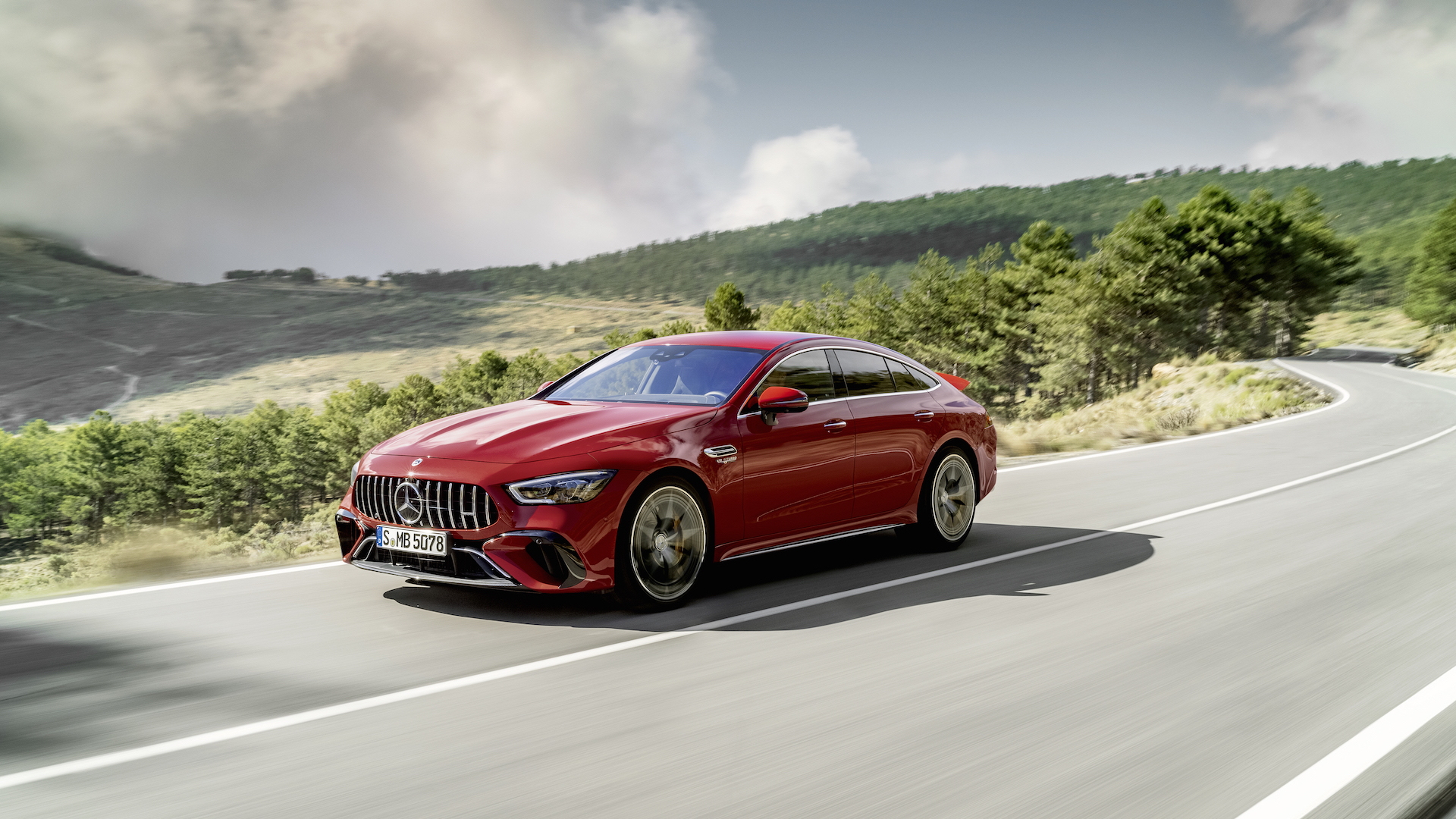 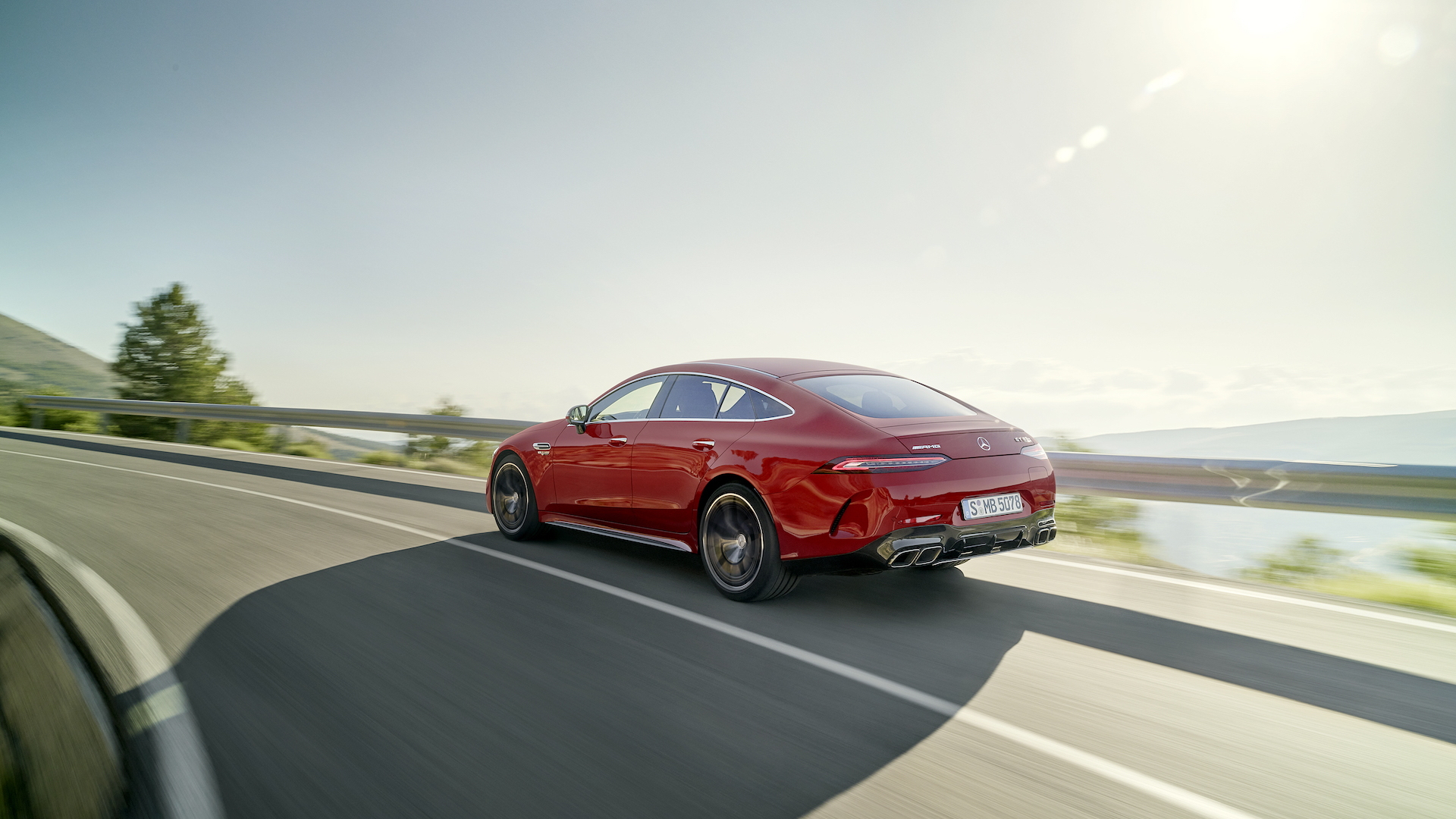 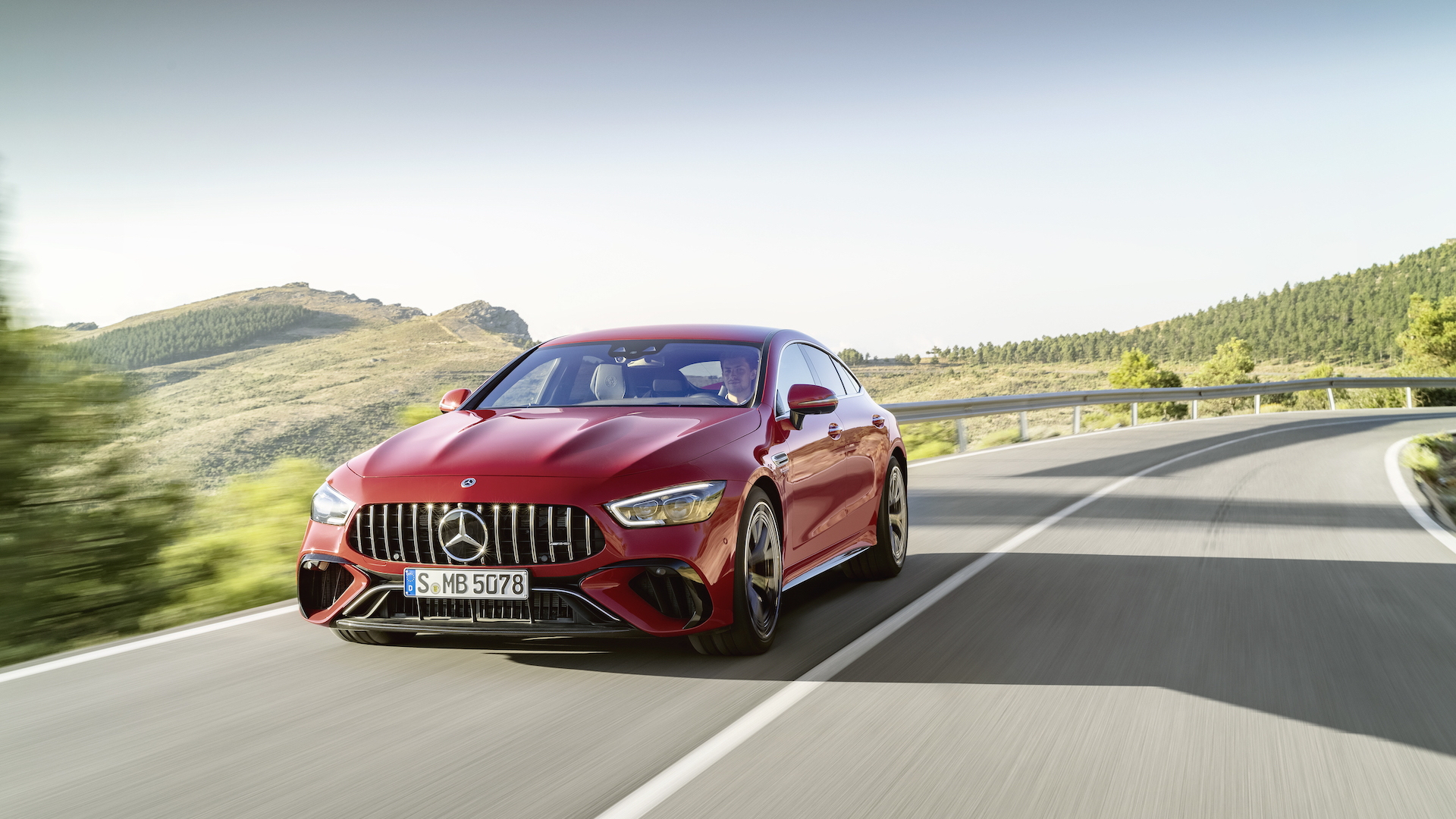 Mercedes-Benz may have limited V-8s for the 2022 model year, but the brand will make up for that big-time in the eyes of performance enthusiasts with an 843-hp plug-in hybrid for 2023. The 2023 Mercedes-Benz AMG GT 63S E Performance broke cover on Tuesday featuring a twin-turbo V-8 and an electric motor to top the power figure of the 2018 Dodge Challenger SRT Demon. A variant of the AMG GT 63S 4-Door Coupe, it is the first car in the brand's electrified E Performance lineup that will include turbo-4s and turbo-V-8s.

Mercedes-AMG's familiar twin-turbo 4.0-liter V-8 will sit under the hood. Tuned here for 643 hp, the engine makes its peak torque of 664 lb-ft from 2,500 to 4,500 rpm and its peak hp from 5,500 to 6,500 rpm. While the torque peak may be a little high, that's no problem because it's supplemented by a rear-mounted electric motor that spins up a maximum of 204 hp for 10-second blasts and can continually provide 94 hp. The motor's torque, which tops out at 236 lb-ft, comes on immediately to fill in any gaps in power delivery at the low end.

The engine sends its power through the familiar Mercedes 9-speed automatic transmission, and the rear electric motor uses a 2-speed transmission that switches over to second gear at 87 mph or when the motor reaches 13,000 rpm. The brand's 4Matic+ all-wheel-drive system is standard, as is an electronically controlled limited-slip rear differential. The mechanical connection between the front and rear axles lets the motor send its power to the front wheels.

The motor gets its power from a lithium-ion battery pack mounted over the rear axle, which teams with the rear-mounted motor to balance the car's weight front-to-rear. Developed by Mercedes-AMG in conjunction with the Mercedes-AMG Petronas Formula One team, it is designed to deliver big shots of power and withstand fast draw. Each of the battery's 560 cells is individually liquid cooled to keep it within ideal operating temperatures. The battery takes in a charge through a 3.7-kw onboard charger.

A belt-driven start-generator run by the car's 400-volt electrical system makes an additional 14 hp, though that power is used to start the engine and run the ancillary systems.

Mercedes-Benz AMG GT 63S E Performance drivers will choose from seven drive modes: Electric, Comfort, Sport, Sport+, Race, Slippery, and Individual. Electric mode drives on electricity alone at speeds up to 80 mph for up to a very modest seven miles. Comfort balances electric drive and the gas engine and adjusts throttle response, ride quality, exhaust sound, and shift points for a luxurious experience. Sport mode adjusts those parameters for agility and power, and unlocks additional boost from the electric motor. Sport+ adds more boost, while Race mode uses all of the available motor boost. Each mode also has a signature sound, and even though the car starts silently on the outside in the default Comfort mode, the speakers emit a typical AMG sound.

Drivers can also select four levels of regeneration via a steering wheel button. They range from coasting like a manual transmission car with the clutch engaged to one-pedal driving.

The 2023 Mercedes-Benz AMG GT 63S E Performance comes standard with a multi-chamber four-corner air suspension with load leveling and adaptive dampers. Mercedes says its engineers significantly increased the spread between comfort and sportiness in the dampers, which can also be adjusted individually via an interior button.

Carbon-ceramic brakes with bronze calipers, six-piston units up front and a single floating caliper at the rear provide the stopping power. These carbon-ceramics are larger than those used in the non-hybrid AMG GT 4-Door Coupe at 17 inches up front and 15 inches in the rear.

The E Performance model gets some subtle exterior cues. The front bumper was influenced by the bumper on the AMG GT coupe and roadster, and the front outer air intakes are wider and pointed inward. The rear end has the charging flap in the rear bumper, new trapezoidal exhaust tips, and the model name in red. "E Performance" badges adorn the fenders.

Inside, the digital instrument cluster can show the electric range, power consumption, electric motor output, and the battery and motor temperatures. The center screen shows power flow; electric motor rpm, output, torque, and temperature; and battery temperature. Even rear-seat passengers get an optional display that shows the energy flow and the power and torque of the motor.

Prices and complete U.S. specs will be released closer to the market launch of the 2023 Mercedes-Benz AMG GT 63S E Performance, likely in mid-to-late 2022.