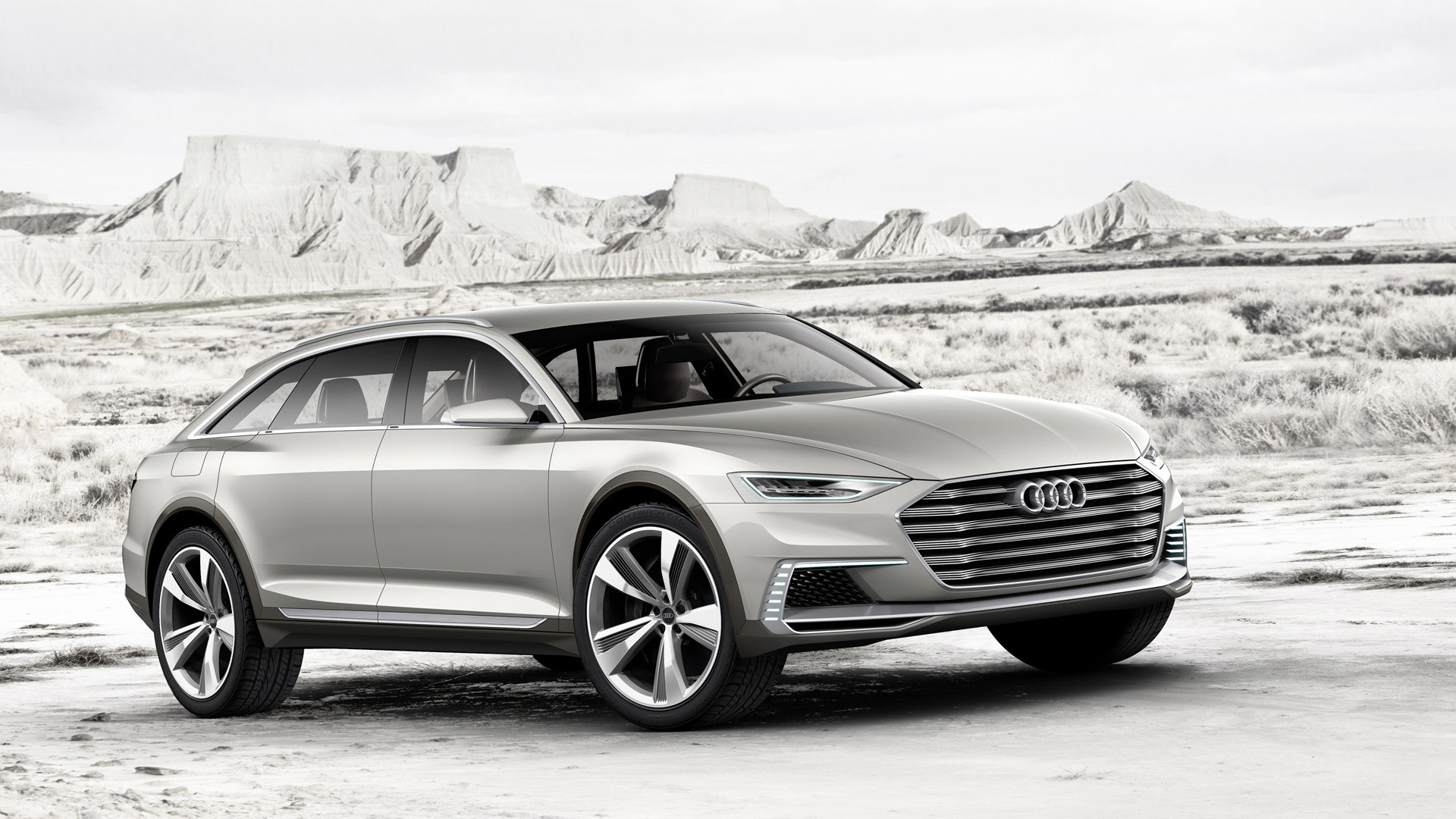 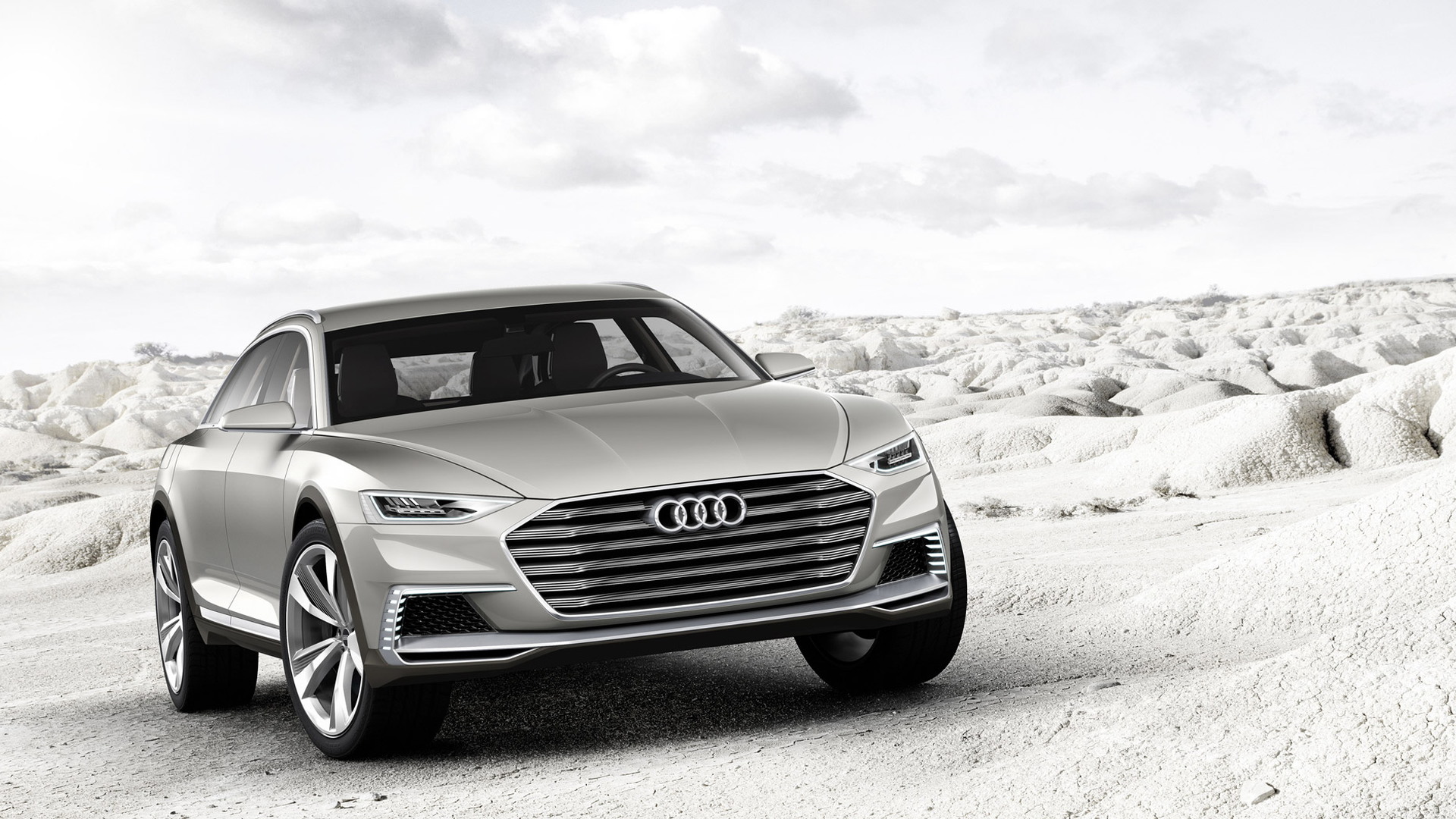 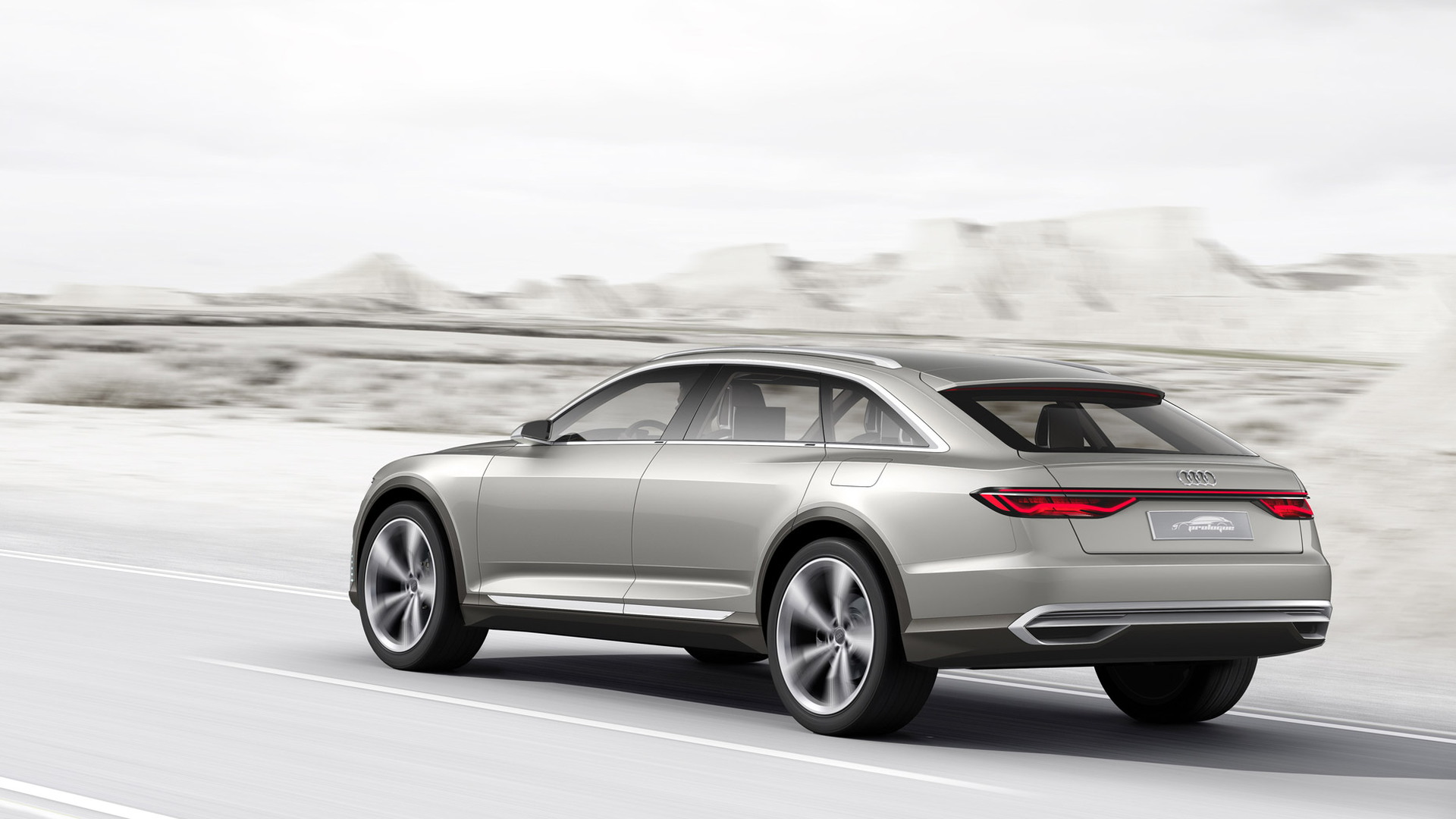 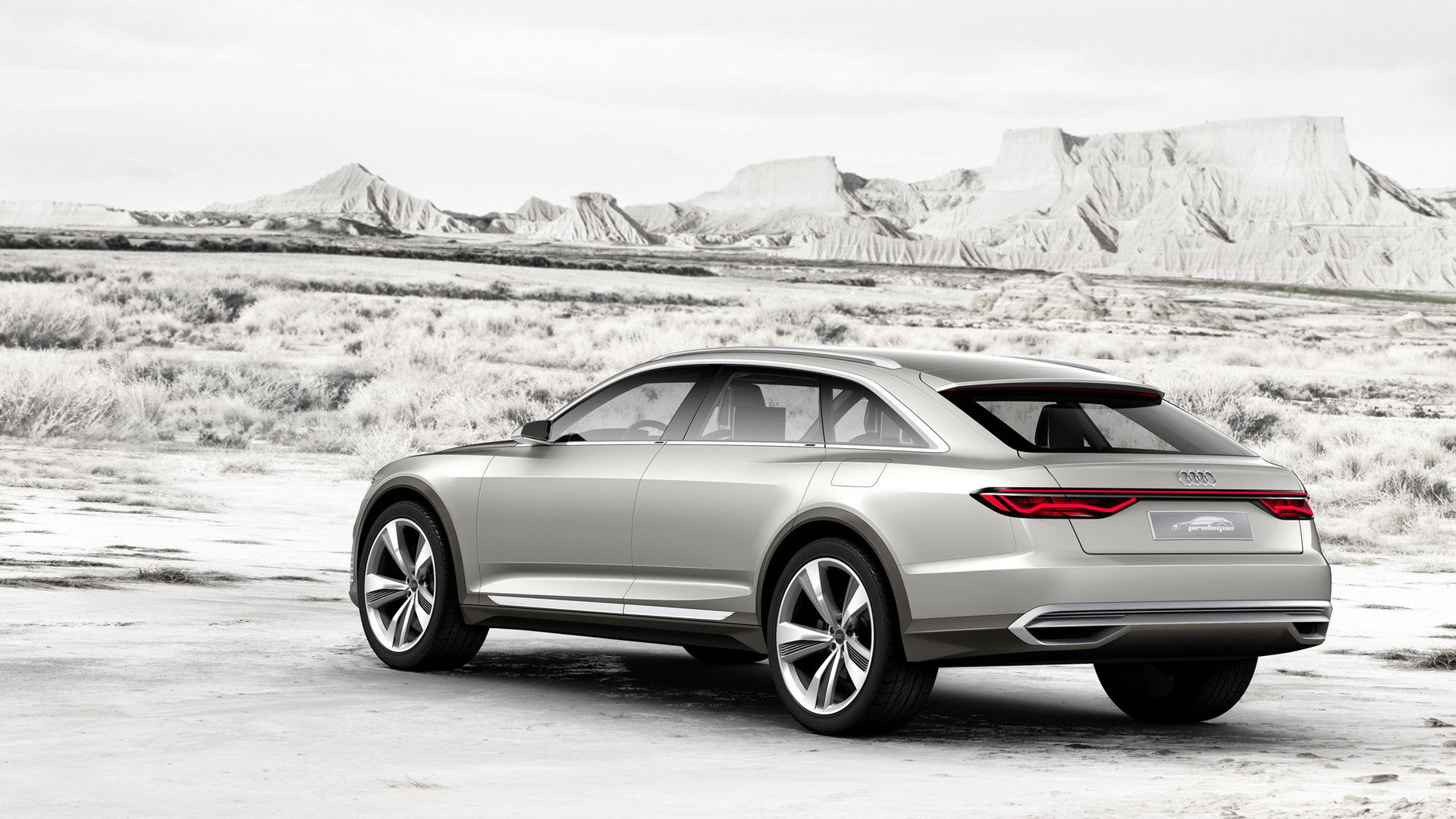 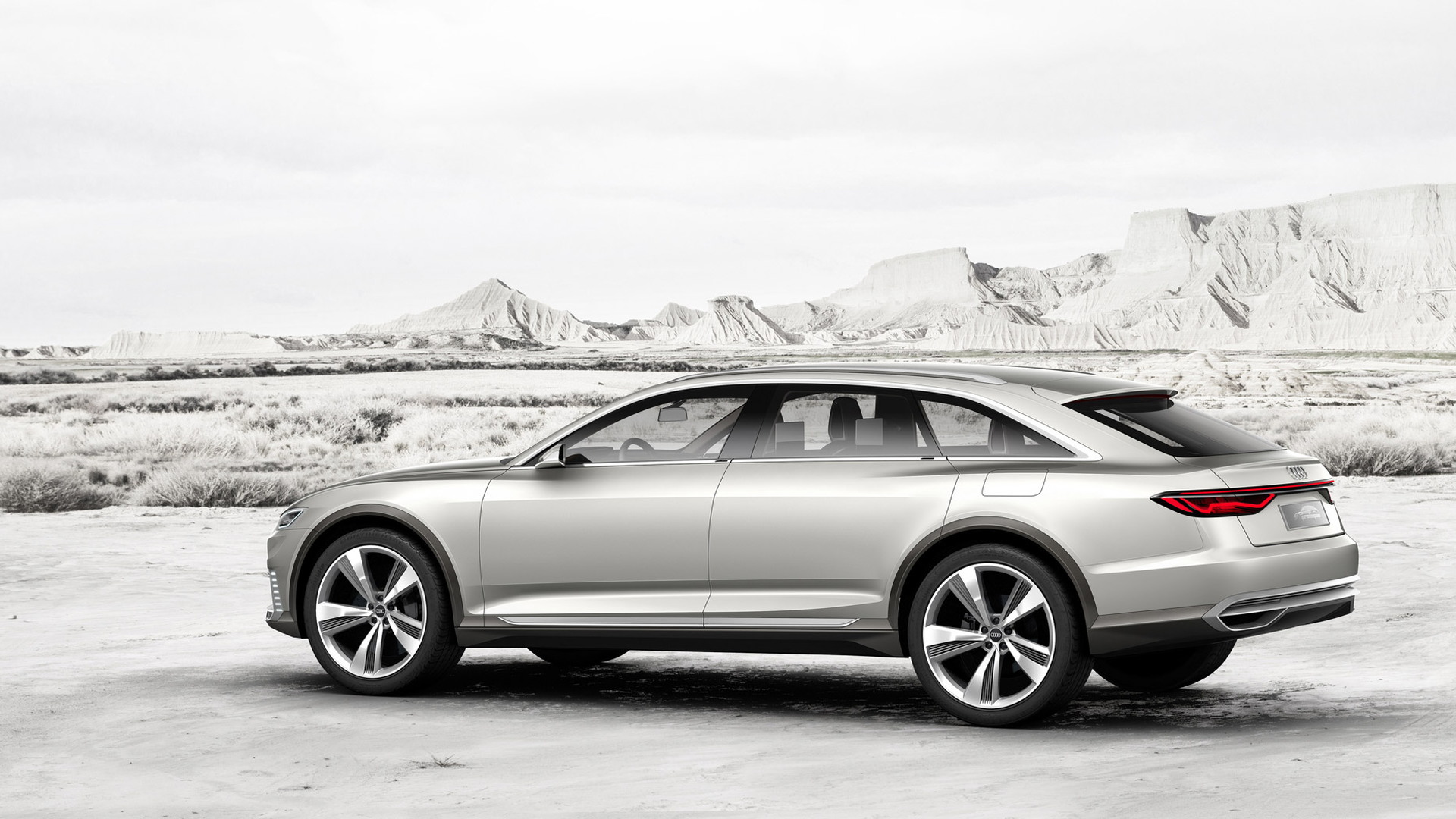 A new form of Audi’s stunning Prologue concept car makes its debut next week at the 2015 Shanghai Auto Show: the Prologue Allroad. As the name suggests, the new concept has been designed as a soft-roader and hints at future developments for cars like the A4 and A6 Allroad. It joins previous Prologue concepts like the original coupe, the autonomous version and the Avant wagon version.

The series of Prologue concepts isn’t a preview of any one model but an early look at the styling and technology Audi is planning for its entire lineup of cars, starting with the next-generation A8 due on the market in 2017. The look of the Prologue was devised by new design chief Marc Lichte, and was actually completed after he finalized designs for the next A8 and A6.

Like all Audi Allroads, the design is based around an Avant body that’s modified to handle rough terrain. The raised ride height, prominent bumpers and flared wheel arches make the all-around talents of the Prologue Allroad abundantly clear at the very first glance. Aluminum accents, handsome 22-inch wheels and a beautiful “Dehua White” paint scheme remind us that the vehicle is also luxurious. Finally, an extension offset in gray runs along the wheel arches and the entire bottom edge of the raised body.

CHECK OUT: Compilation Of Supercars Starting Is A Great Use Of The Internet: Video

For the cabin, the Prologue Allroad is more like a luxurious, high-tech lounge than simply a mode of transport. Here, Audi is demonstrating a new display and operating concept. Across its full width, the front of the instrument panel is designed to be a display surface which integrates three touch displays—two for the driver and one for the front-seat passenger. The center console tunnel houses an additional driver display for climate control system, infotainment and text input. When inactive, the display is in a flat retracted position; as soon as the car is started, it moves up at an angle.

Hinting at a potential new seating arrangement for Audi cars, rear passengers in the Prologue Allroad sit in plush, individual seats. They use an additional display on the center console to adjust the seats, the control the climate and infotainment systems. Finally, two tablets, which can be mounted in the backs of the front seats, are located here.

One interesting element Audi has previewed in all of its Prologue concepts is a “butler” feature. This is an intelligent software program that identifies the passengers via their smartphones and adjusts the seats and climate control system according to their preferences. The system also makes suggestions for music and route planning according to the preferences.

The powertrain of the Prologue Allroad is the high-performance plug-in hybrid system we first saw in the autonomous Prologue. It features the Volkswagen Group’s ubiquitous turbocharged 4.0-liter V-8 and an electric motor sandwiched between the engine and an eight-speed automatic transmission. Peak output of the system in the Prologue Allroad has been raised to an impressive 724 horsepower and 663 pound-feet of torque, with drive sent to all four wheels via a quattro all-wheel-drive system.

DON'T MISS: Addition Of New R8 In 'Avengers: Age of Ultron' Will Be Done With CGI: Video

According to Audi, the Prologue Allroad will rocket to 62 mph from rest in just 3.5 seconds, yet it’s capable of returning a fuel economy of 98 mpge. The lithium-ion battery mounted in the rear of the car has a capacity of 14.1 kWh for a purely electric range of just over 33 miles.

This year’s Shanghai Auto Show gets underway April 20. Audi will also use the show to present two production plug-in hybrids designed for the Chinese market: an A6 L e-tron and a Q7 e-tron equipped with a 2.0-liter engine. To see what else will be at the show, head to our dedicated hub.