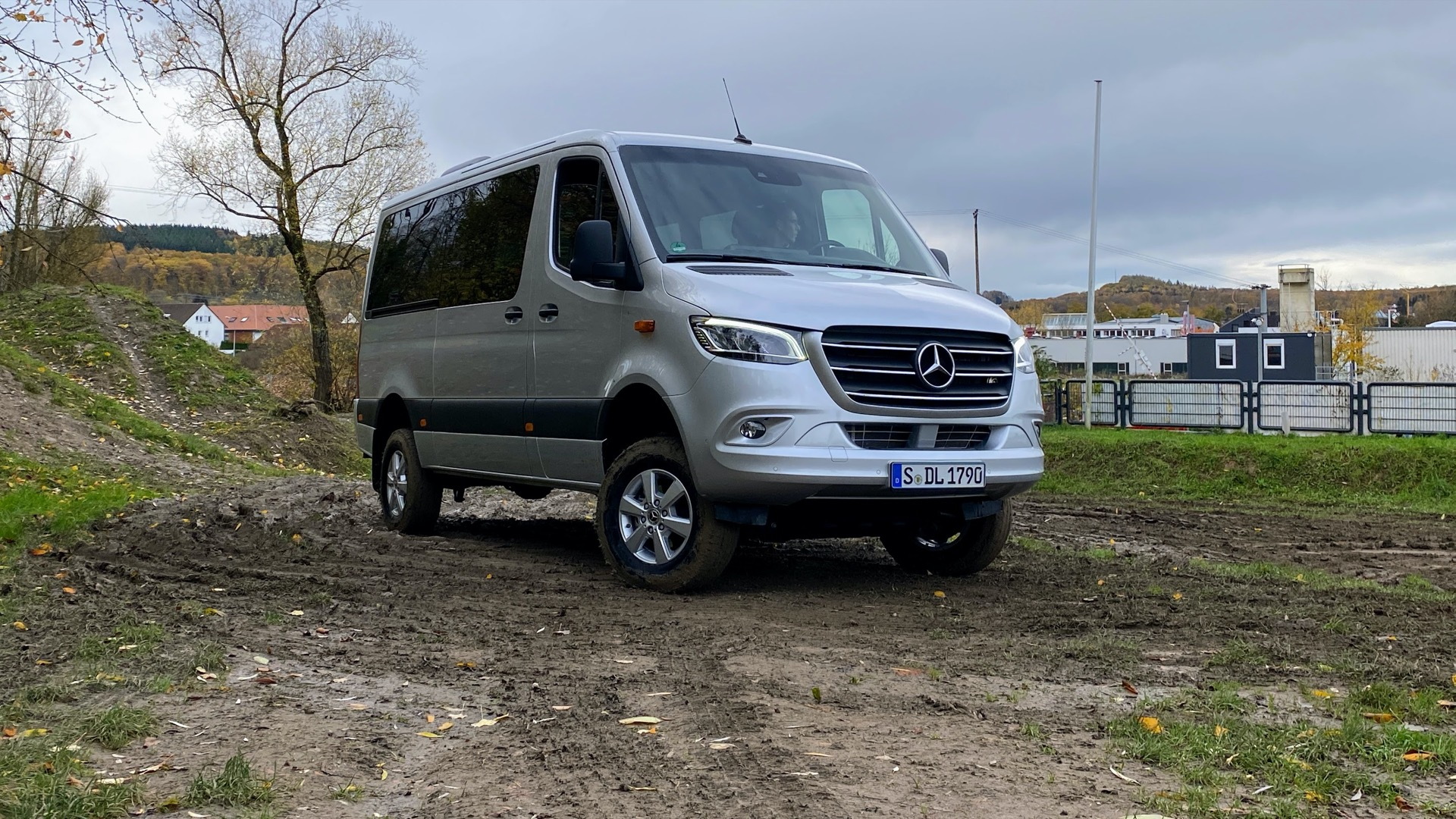 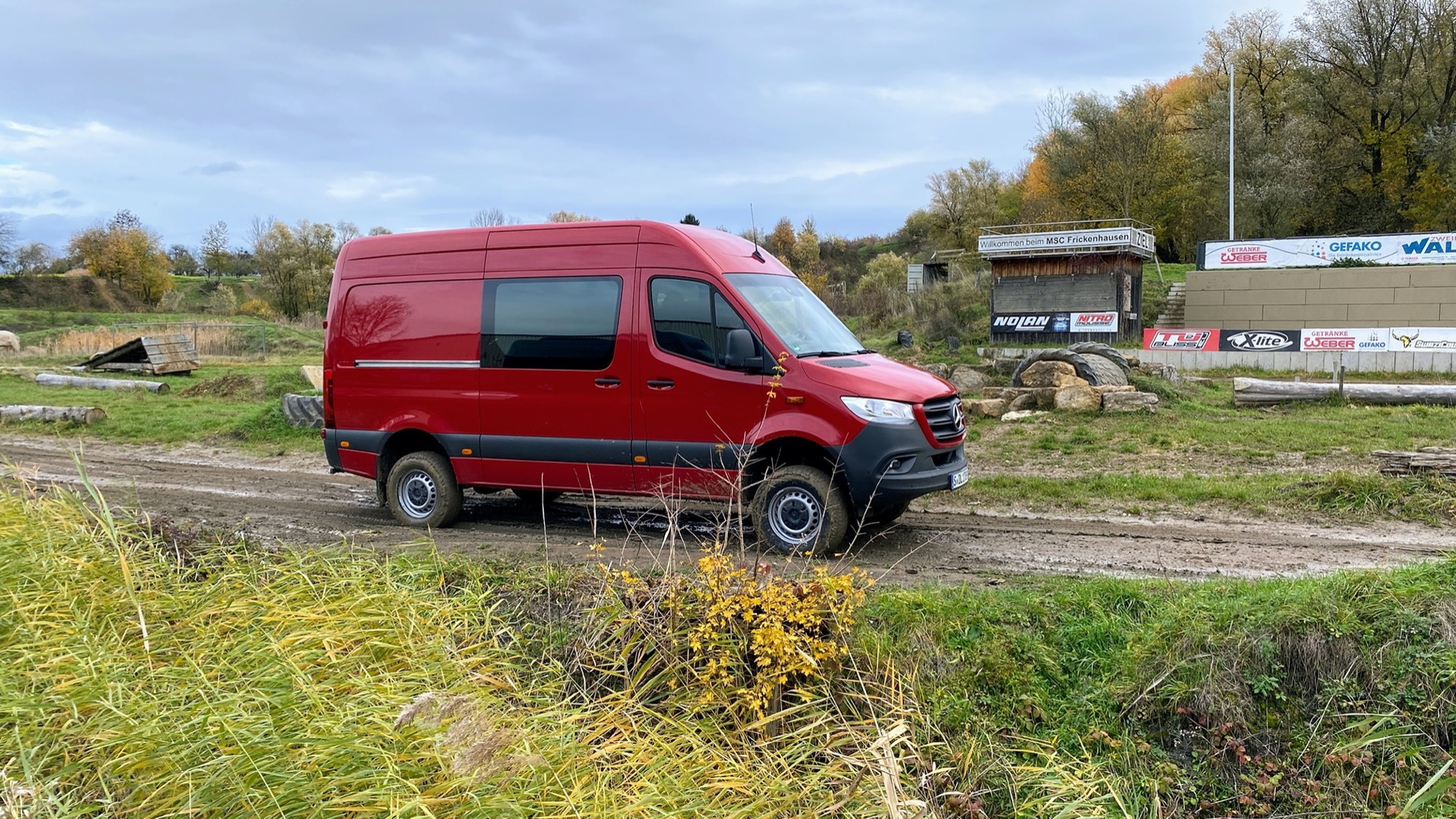 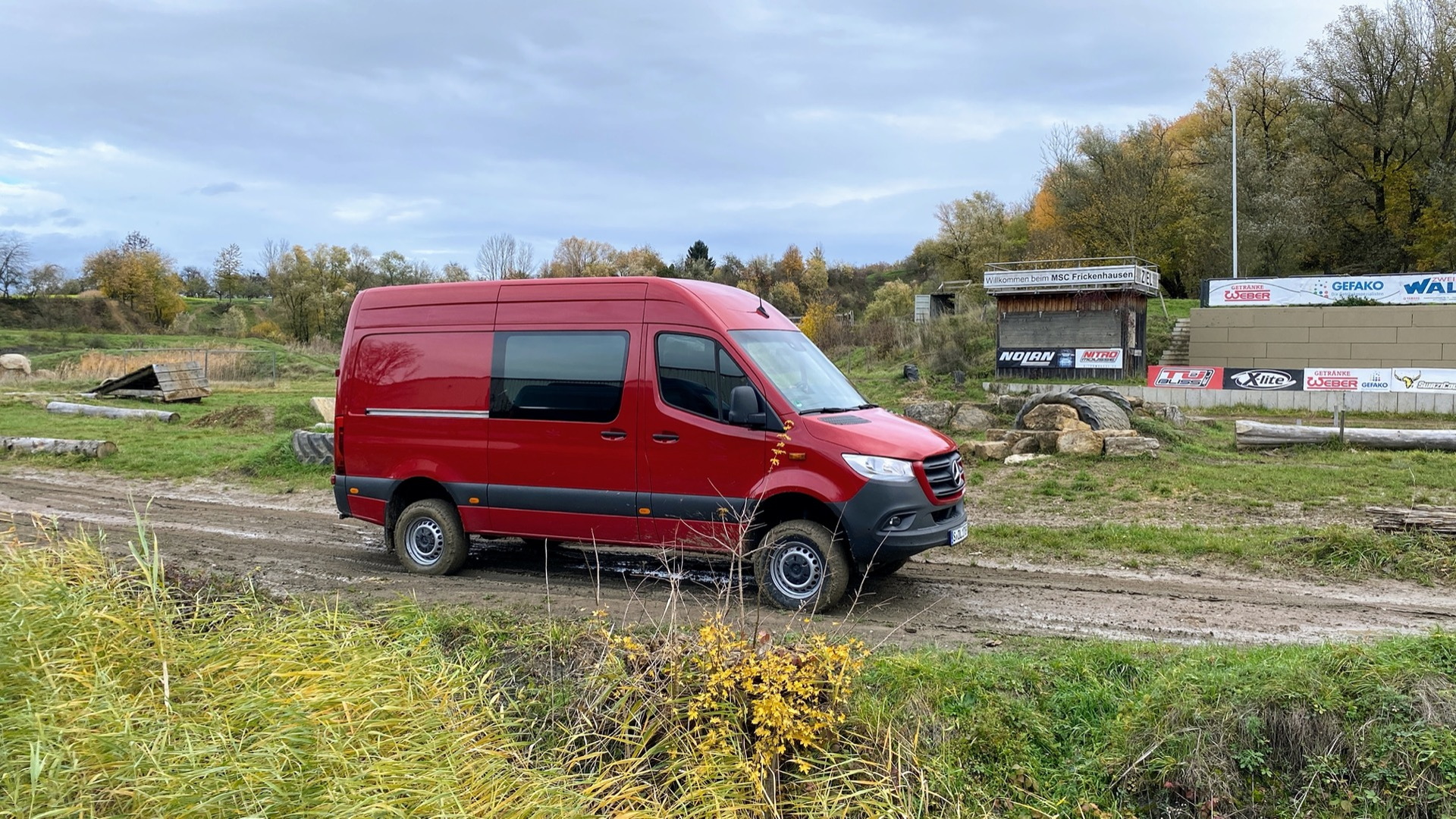 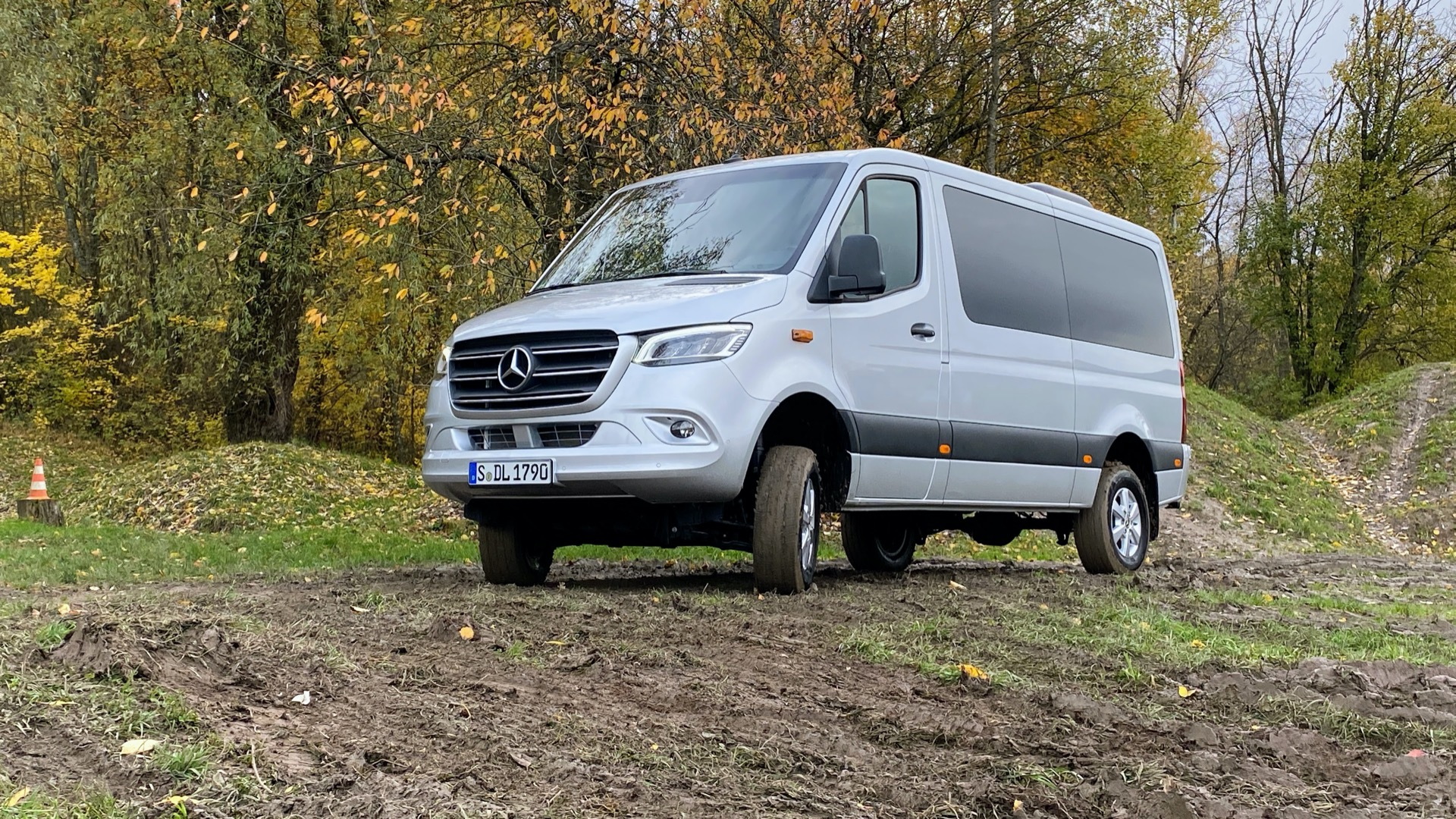 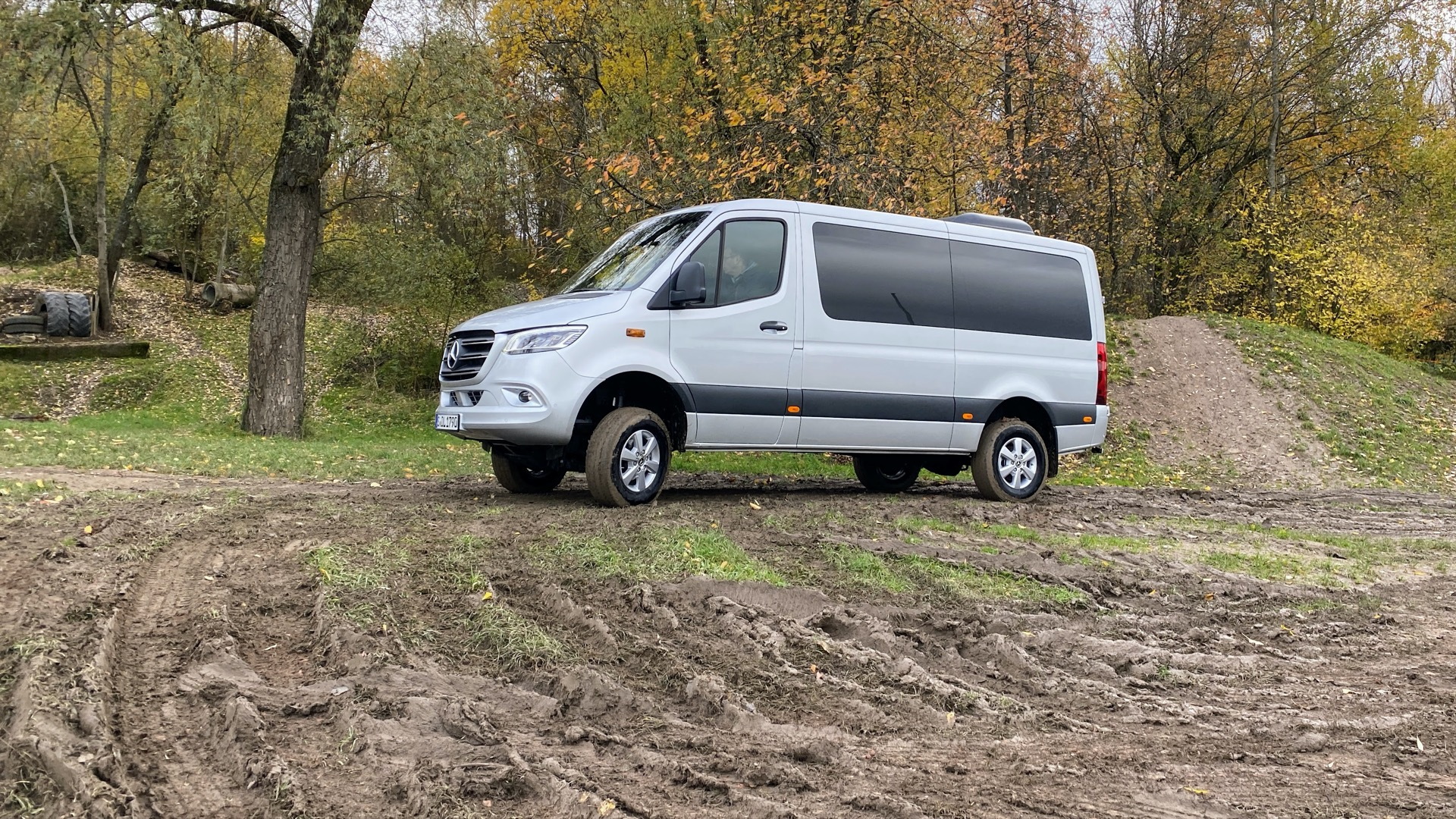 The steep, unpaved driveway was so loose and mud-slicked from recent rains that I could feel the ground sliding ever so slightly beneath the tires, even after we’d stopped.

I was instructed by my guide in the passenger seat of a big 2023 Mercedes-Benz Sprinter AWD passenger van, at the mucky off-road park near Stuttgart, to reverse and back up the small hill, and he didn’t seem the least bit worried about the concrete wall just a foot or two away.

Without engaging any special modes or following any special tactic for accelerating out, I lightly then moderately pressed the accelerator. The Sprinter, riding on Continental VanContact Winter tires, didn’t waste any power to the rear wheels. Instead, it gently worked the front wheels bearing nearly all the big van’s weight, gaining traction side to side to push the van cleanly up the incline and out of the mud pit.

It was a nerve-wracking but quick demonstration, and though we did other driving in the mud, backing out of a mud pit was the most impressive of the day. Engineers conceded that it would have ended quite differently in the outgoing van.

Taking the starring role in this maneuver was a new four-wheel-drive system that uses a multi-clutch system to continuously vary the torque split, sending up to 100% to the front or 100% to the rear, or any combination in between, with the help of brake torque vectoring. Essentially a transplant from the Mercedes-Benz GLE and GLS SUVs, it’s a big improvement over the previous system, which was a part-time system locked to a split of 33% to the front and 67% to the rear.

Standard downhill assist control can be turned on when desired to moderate a very low, controllable rate of descent, even when the going gets slippery. The speed is adjustable somewhat higher or lower via the cruise control toggle.

Those who want all-wheel drive in the revamped 2023 Mercedes-Benz Sprinter lineup must go with the diesel engine, and what’s under the hood is improved, too, playing an important role in this new traction and refinement. The new generation 2.0-liter inline-4 turbodiesel engine is offered in a choice of two different power outputs—170 hp and 295 lb-ft of torque, or 211 hp and 332 lb-ft—but all-wheel drive is offered only in combination with the higher-output engine.

It’s hooked up to a new 9-speed automatic transmission. First gear for the automatic is actually 25% lower than the previous setup afforded with a low range, so they’ve eliminated that layer of transfer-case complexity entirely.

This is the same OM654 engine that’s used across the Mercedes-Benz car and SUV lineup in Europe. Mercedes says it’s a “more capable engine” than its turbodiesel predecessor, an inline-6. The company also notes that the new engine and transmission bring improved efficiency, decreased noise levels, lower emissions, and more sprightly performance, including quicker launches.

That’s exactly what I experienced in a short on-road drive. While I didn’t experience the possible increased sound and roughness of a cold start, it’s quiet and smooth. It also pairs well with the transmission, which delivers superbly damped upshifts and quick downshifts that feel borrowed from a luxury SUV.

Electric power steering also replaces hydraulic-boost steering for 2023, and it has a light, precise feel that makes the van easier to place on tight city streets, around roundabouts, and such.

That said, this van is not a posh SUV that will do most of its miles on the daily commute, or on the way to soccer practice. Mercedes-Benz has a lot riding on its Sprinter vans. They’re the choice for delivery drivers, they act as brawny upfits for plumbers and electricians, and they also serve ski resorts, rafting companies, and outdoor enthusiasts. The Sprinter has been available with four-wheel drive since 2015, and pretty much from the outset that made it one of the top new vehicle picks for the overlanding craze.

Back to the slippery stuff. The way the improved Sprinter AWD scrambles for traction reminds me more of dual-motor electric vehicles than other all-wheel-drive vans I’ve driven. There’s a level of finesse that truck platforms such as this rarely exhibit.

Mercedes engineers confirmed that while the system is carried over from SUVs, it has developed a vast, expanded control map to accommodate different loading and upfit aspects of the van, including upsized tires, lifts, and all the rest that an overlanding user might throw at it.

I couldn’t help but wonder if all this traction expertise will be shared with upcoming electric Sprinters, as the brand shifts toward a full electric lineup by 2030. For now, that question remains unanswered, but there have definitely been hints. Mercedes has already announced that starting in 2023, it will build a new eSprinter in South Carolina, and designed on a modular Electric Versatility Platform that will place an electric motor at the rear wheels. As for an all-wheel-drive eSprinter, I remain optimistic that it will remain an option with the Van.EA dedicated EV platform for light commercial vehicles. It’s hard to imagine Mercedes giving up such capability in the shift to electric.

The 2023 Sprinters are arriving now in the U.S. The starting price of the U.S.-spec Sprinter is $47,000 in Cargo Van form, ranging up to $52,610 in Passenger Van form, and it’s a hefty $12,500 upgrade to any of those for the diesel engine and all-wheel drive. For anyone thinking about building the overlanding rig of their dreams, it’s just the start for the upfit, now with better footing for the future.