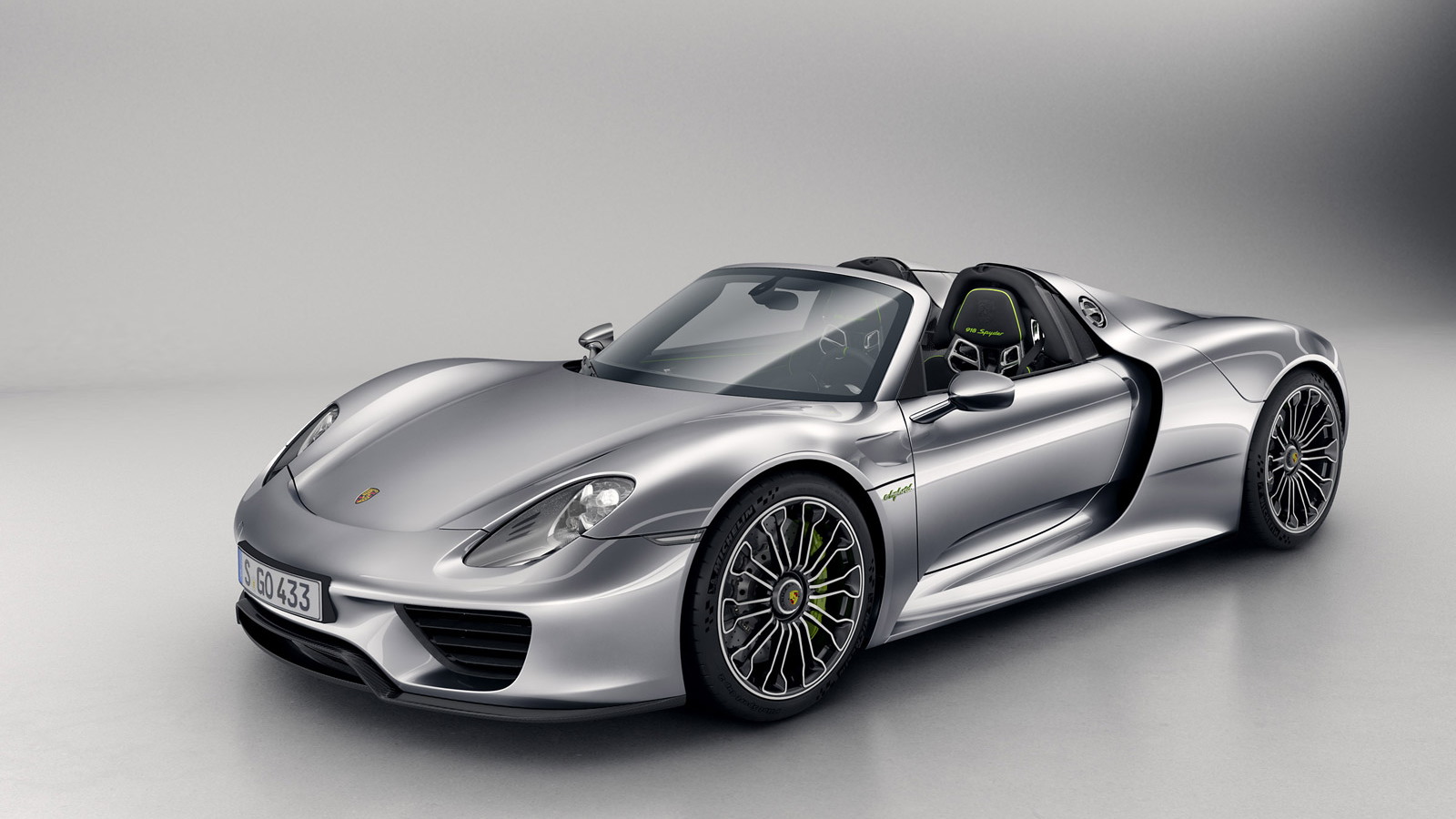 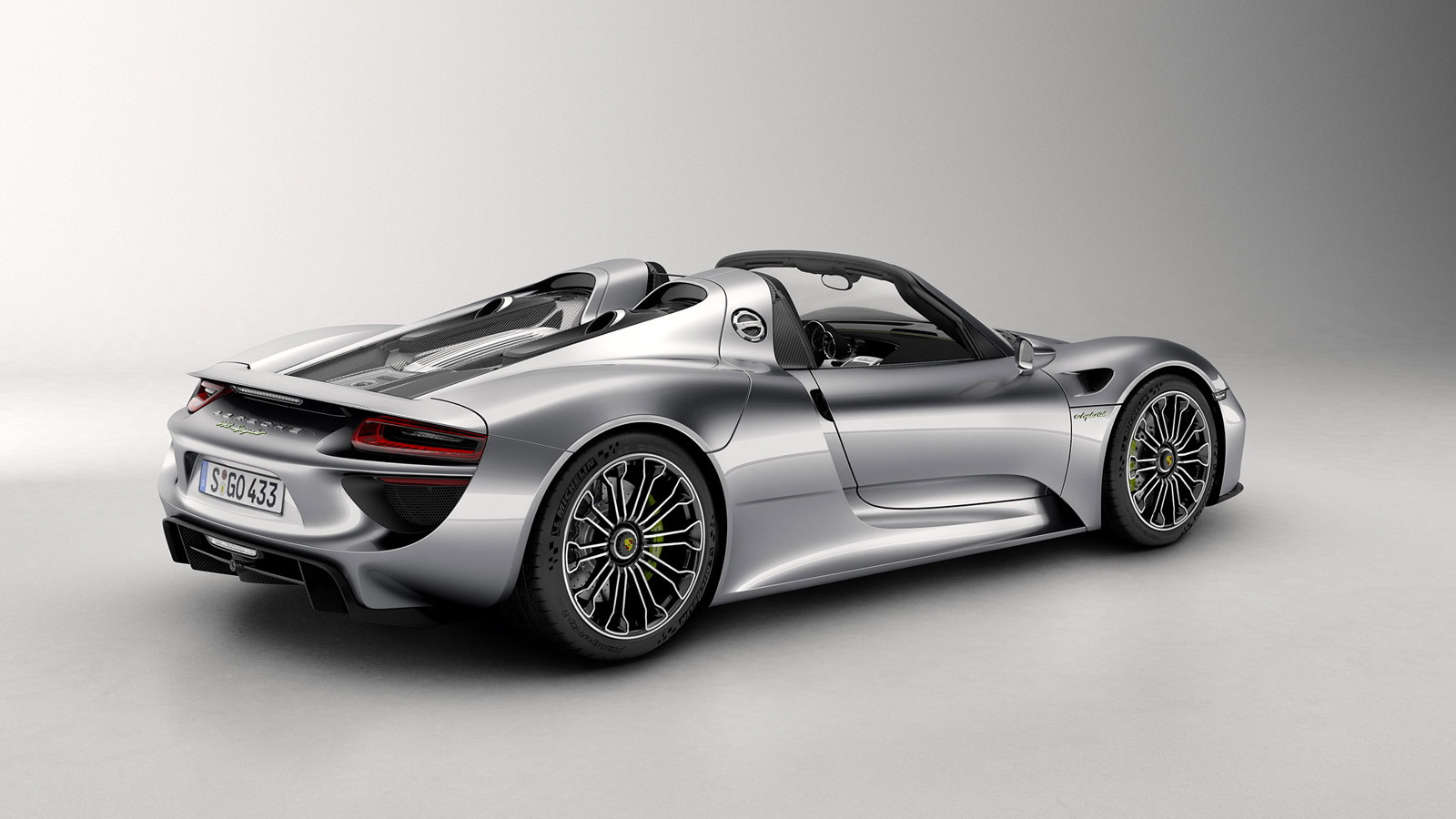 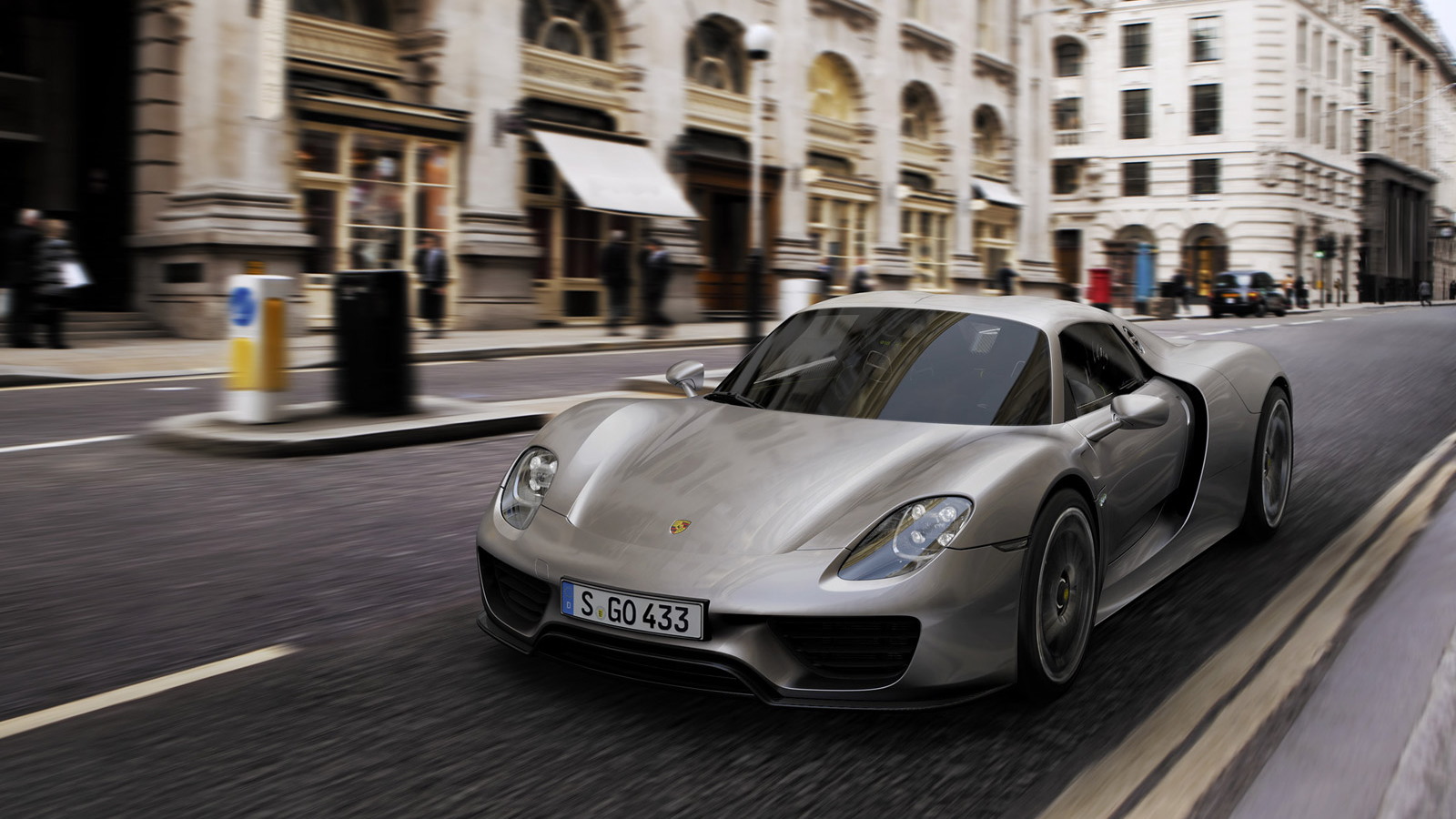 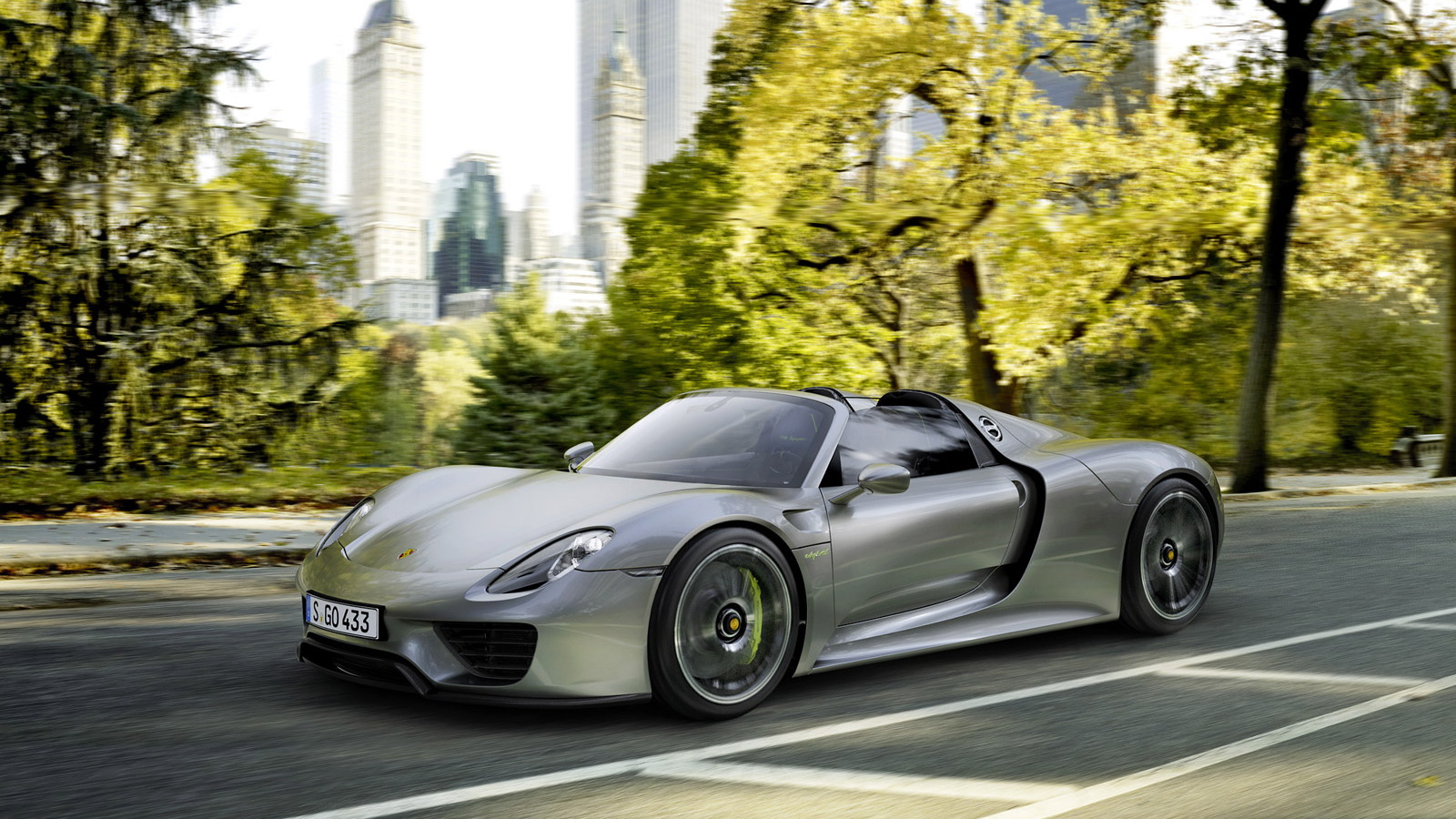 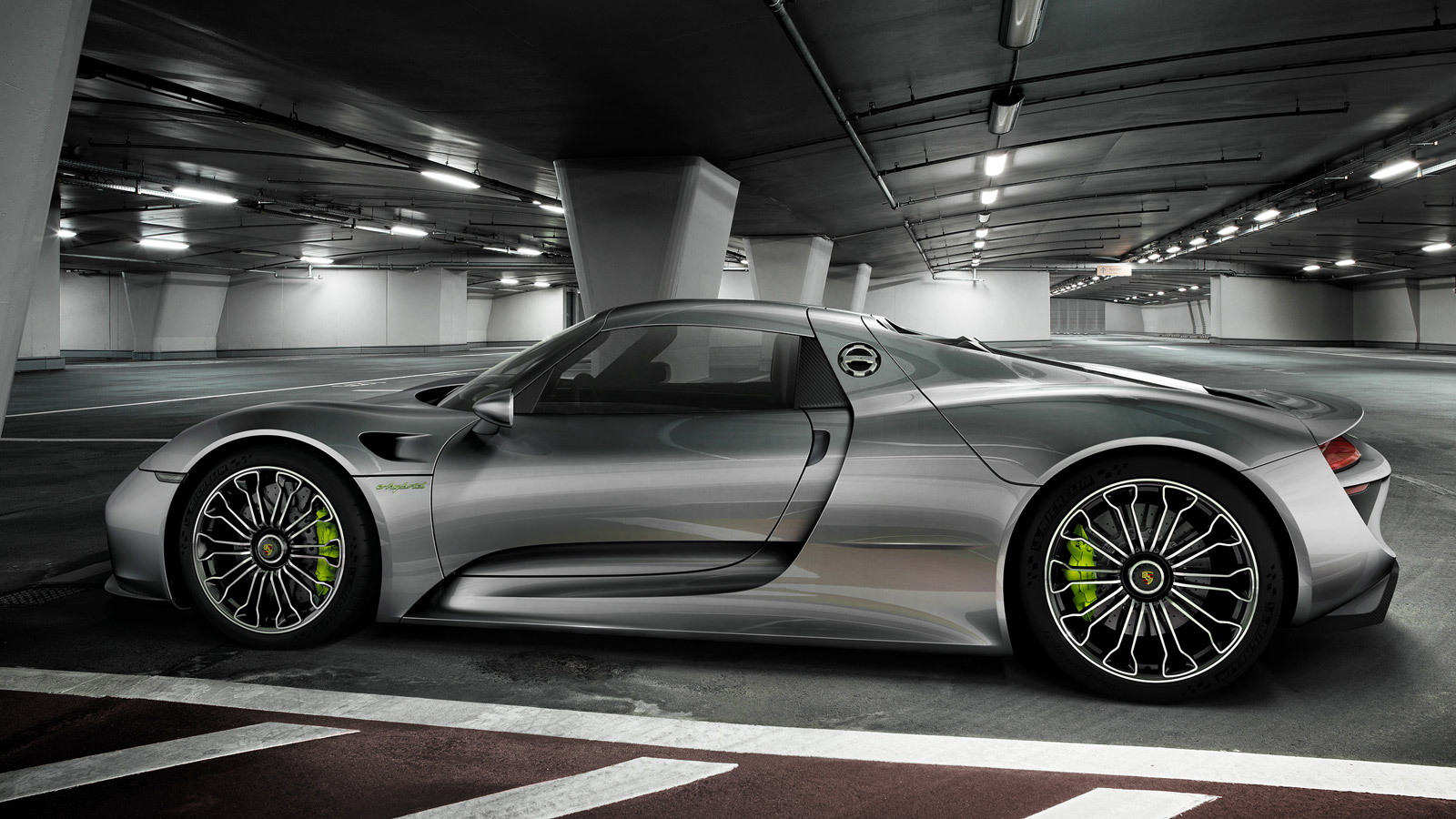 17
photos
We’ve already seen it in production trim, and Jay Leno’s already driven it, but nevertheless here are the official details and photos for Porsche’s 918 Spyder, which just made its debut at the 2013 Frankfurt Auto Show. First shown in concept form at the 2010 Geneva Motor Show, the 918 Spyder in production trim has managed to stay true to the original concept, right down to its rear bulkhead-mounted exhaust tips.

The concept’s sophisticated plug-in hybrid drivetrain has also remained largely intact, though there have been some minor changes made for production. A race-bred 4.6-liter V-8 is paired with an electric motor and seven-speed PDK dual-clutch transmission and spins the rear axle, while a second electric motor is used to spin the front axle.

The engine produces 608 horsepower on its own and screams to 9,150 rpm. It is based on the design of the racing engine found in the successful RS Spyder Le Mans prototype and also features lightweight components made from carbon fiber. The two electric motors produce 154 horsepower (rear) and 127 horsepower (front), respectively. System output for the 918 Spyder is 887 horsepower and 940 pound-feet of torque.

These numbers are slightly down on those of the Ferrari LaFerrari and McLaren P1, however, the Porsche 918 Spyder has the added traction of all-wheel drive, in this case a through-the-road hybrid system. The Porsche also benefits from a four-wheel steering system, already showcased on the latest 2014 Porsche 911 Turbo.

The combination of gasoline and electric drive also means 918 Spyder drivers have the choice of five different modes to choose from. These include E-Power, Hybrid, Sport Hybrid, Race Hybrid and Hot Lap, all of which are accessed using a control on the steering wheel. In E-Power, the car runs on electric power alone, and with a full charge of its 6.8-kilowatt lithium-ion battery, drivers can expect a range of about 18 miles. Even in the E-Power mode, the car accelerates from 0-62 mph in seven seconds and can reach speeds of up to 93 mph.

For the track, there’s Race Hybrid, where both the engine and electric motors output their full capacity. However, there is an even more extreme mode, Hot Lap. Here, everything is turned to the max and the battery is no longer charged so that the combustion engine can focus purely on driving the wheels. This mode, as its name suggests, is designed for setting lap records.

Also aiding the 918 Spyder on the track is a trick aerodynamics system. Here, there are three modes, with the most potent being a Race mode. A spoiler positioned between the two wing supports near the trailing edge of the airflow extends. Furthermore, two adjustable air flaps are opened in the underfloor in front of the front axle, and they direct a portion of the air into the diffuser channels of the underbody structure, helping to increase downforce.

Double-wishbone suspension is fitted up front and a multilink setup is used in the rear, with adjustable dampers at both ends. An electro-mechanical setup is used for the steering and the brakes are carbon ceramic discs measure up to 16 inches in diameter.

Unfortunately, all of this tech has come at a cost: weight. Despite featuring a carbon fiber monocoque chassis, the 918 Spyder still weighs a portly 3,715 pounds (an available ‘Weissach’ package brings that figure down to 3,616 pounds). In comparison, the aforementioned LaFerrari and P1 tip the scales at around 3,000 pounds.

Like its drivetrain, the 918 Spyder’s interior is thoroughly modern, coming with several LED panels and a large center column trimmed in aluminum and glass and featuring numerous controls on a smartphone-like glass surface.

Stay tuned for live photos of the Porsche 918 Spyder, and for more from the 2013 Frankfurt Auto Show visit our dedicated hub.