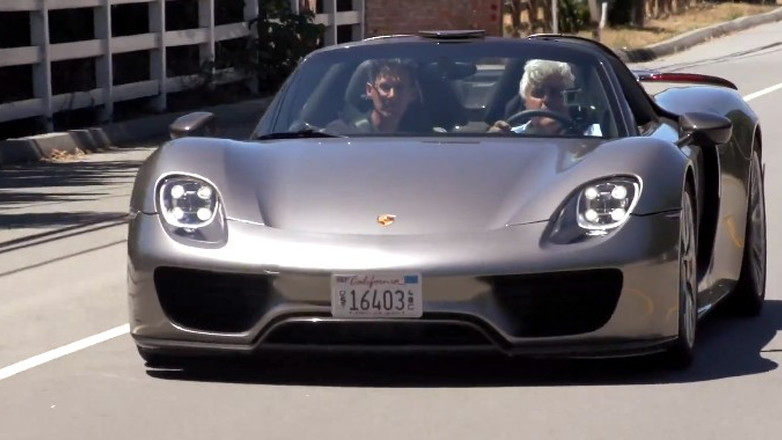 It's the must-drive car on everyone's list right now. We're talking about the Porsche 918 Spyder, which is one of the most exciting cars of the year from a hype standpoint.

Of course, it's most likely also amazingly exciting from a reality standpoint, as it's the technologically advanced machine to flow forth from Porsche... ever. The 918 made an appearance at Pebble Beach recently, and that's where Mr. Leno got to learn more about the Stuttgart special before heading off on a quick trip through the town.

Frank Walliser, Head of the Porsche 918 Spyder program, was on hand to walk Jay through the ins and outs of the car. He learned that the total power output is 887 horsepower. That figure comes about when the 4.6-liter V-8 is working in concert with the pair of electric motors. The 918 Spyder is capable of running on pure battery power for between 10 and 16 miles, and it can then run in as a standard hybrid or in a full Race mode, both of which force the V-8 and the electric drivetrain to work together all the time.

Should the 918 owner decide to creep through town, he or she may do just that. When in full race mode, however, the car is at its most alive and a glorious noise barks forth from the rear-deck mounted exhaust outlets. These pipes take on the appearance of something you'd find on a top-secret military fighter jet, yet they look equally at home on the back of Porsche's latest high-speed all-star.

If all of that sounds interesting to you, you're in luck because the production run isn't quite sold out yet. At least, that was the case last we heard. Porsche will build 918 examples of the, ahem, 918 Spyder, and if you have the means we suggest adding this one to your stable. It's not very often a supercar pushes the evolution of the breed forward and that's exactly what is going on here with the 918 Spyder.