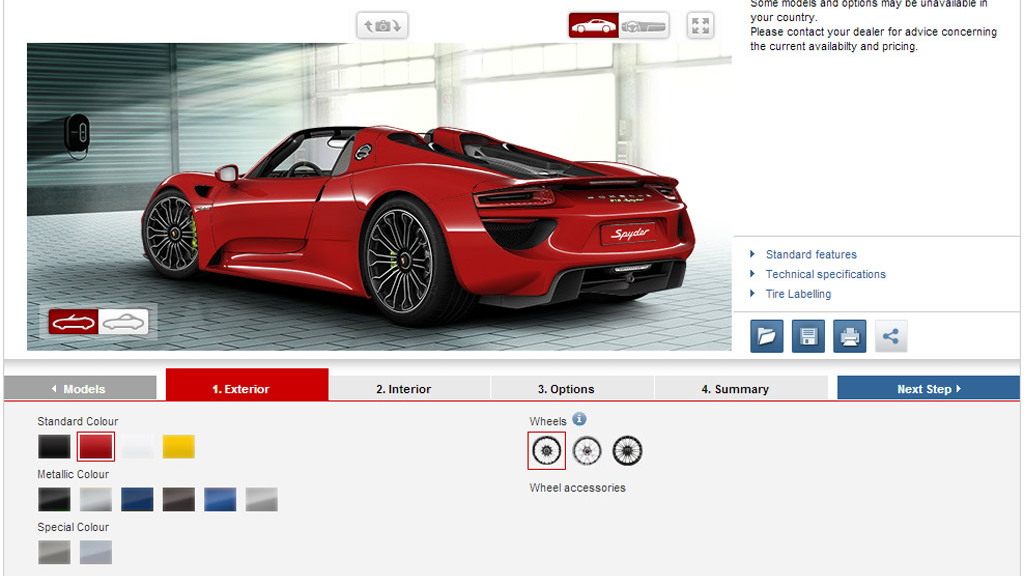 13
photos
The dust hasn’t even settled on the floors of the Frankfurt Auto Show where the Porsche 918 Spyder just made its world debut, but already a configurator for the car has gone live on the Porsche website. Porsche still has some remaining build slots for the car--918 are planned in total--so if you happen to have $845,000 lying around then it wouldn’t hurt taking a look at the configurator.

Heck, it’s a lot of fun even if you don’t have that kind of cash as it allows you to view the car in all of its standard colors, try on several different wheels, play around with the exterior and add a couple of options. At the end, you’re able to save your favorite combination and shoot an email to your local Porsche dealer in case you need further advice.

One cool option selectable via the configurator is the ability to personally pick up the car at Porsche’s headquarters in Stuttgart-Zuffenhausen or at the factory in Leipzig. This would allow you to take the 918 Spyder for a quick romp on Germany’s autobahns before finally shipping it home. You could even book some time at the Nürburgring where the 918 Spyder recently set a lap of just 6:57, a new record for a production car.