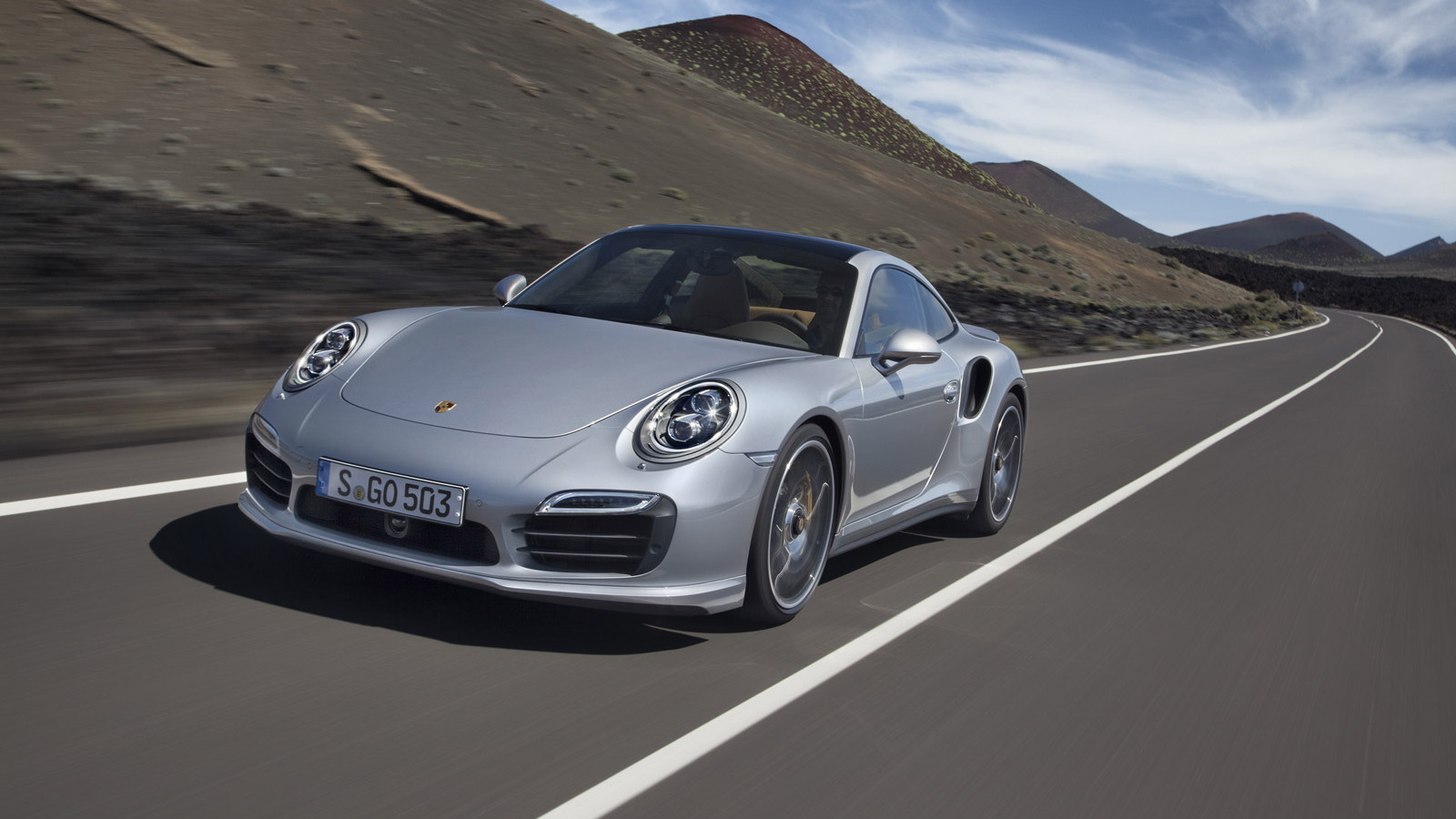 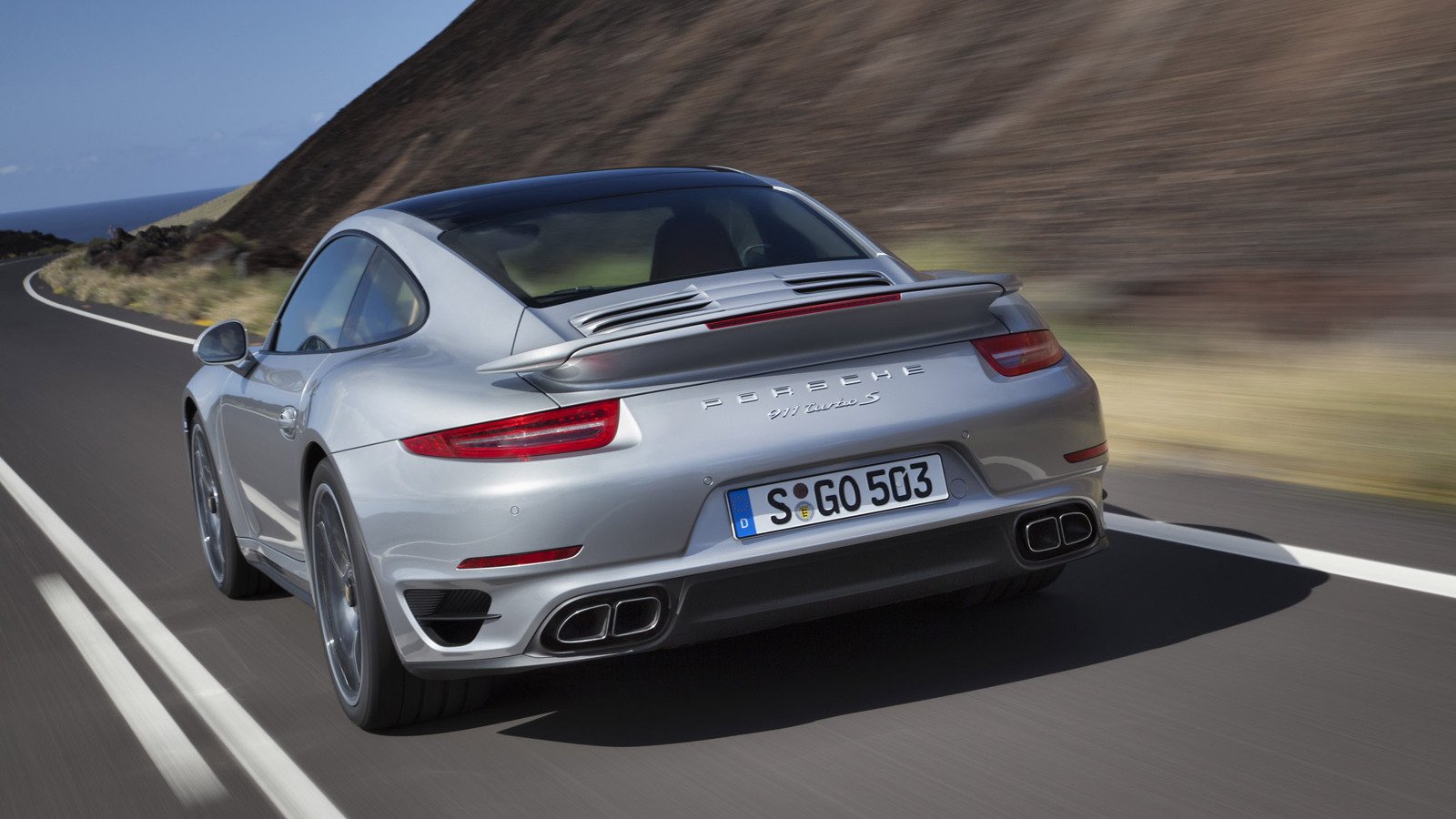 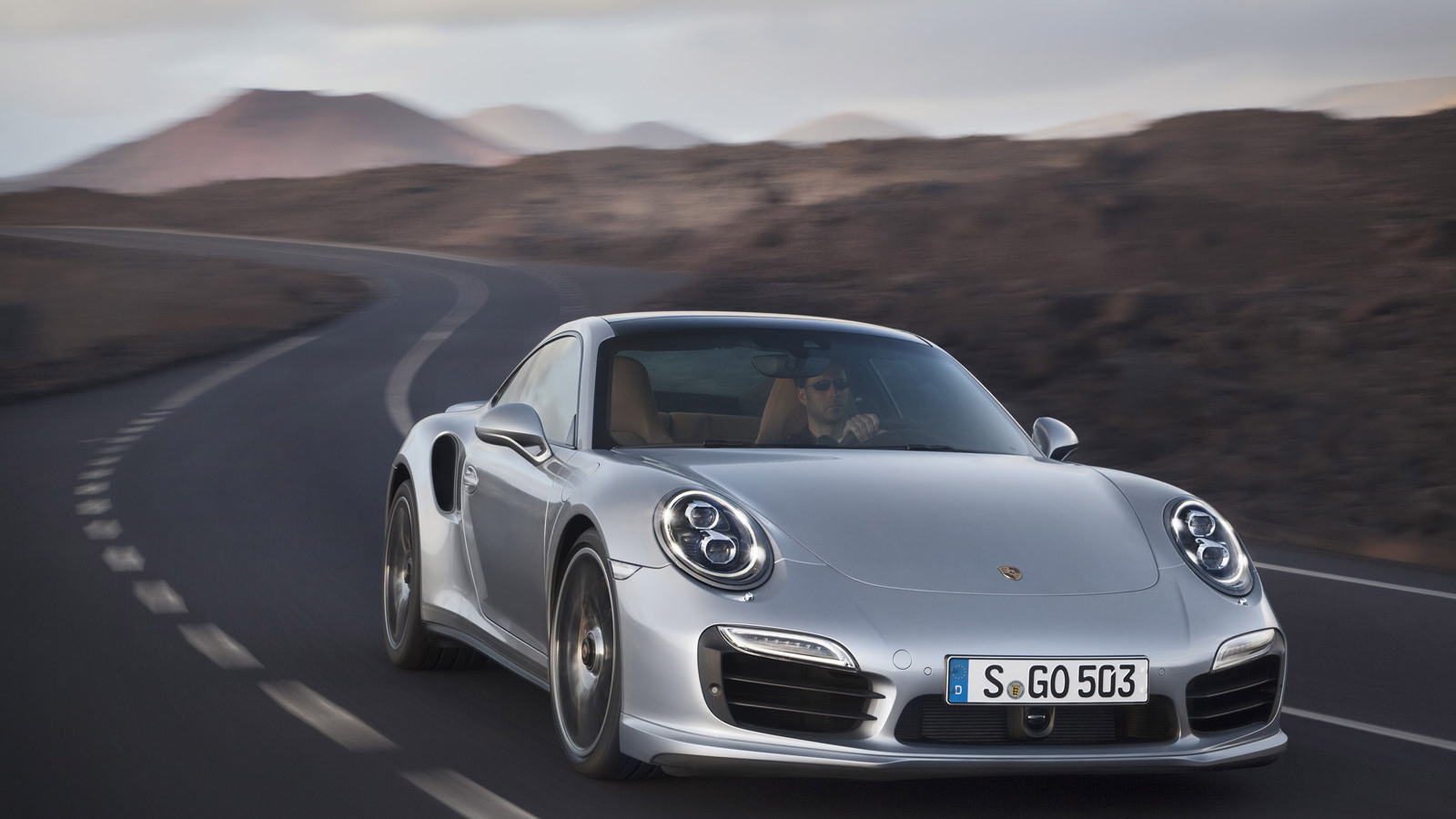 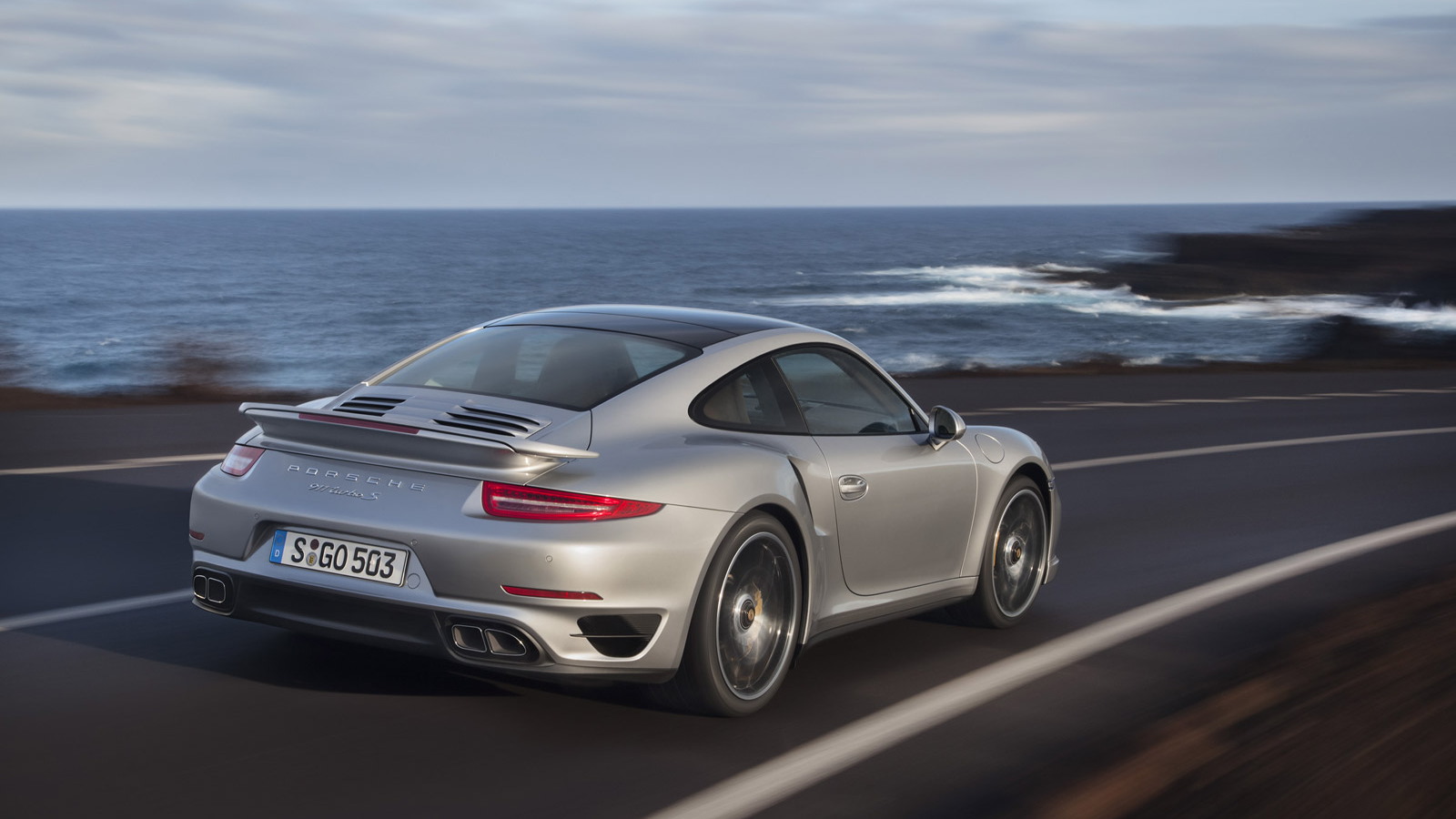 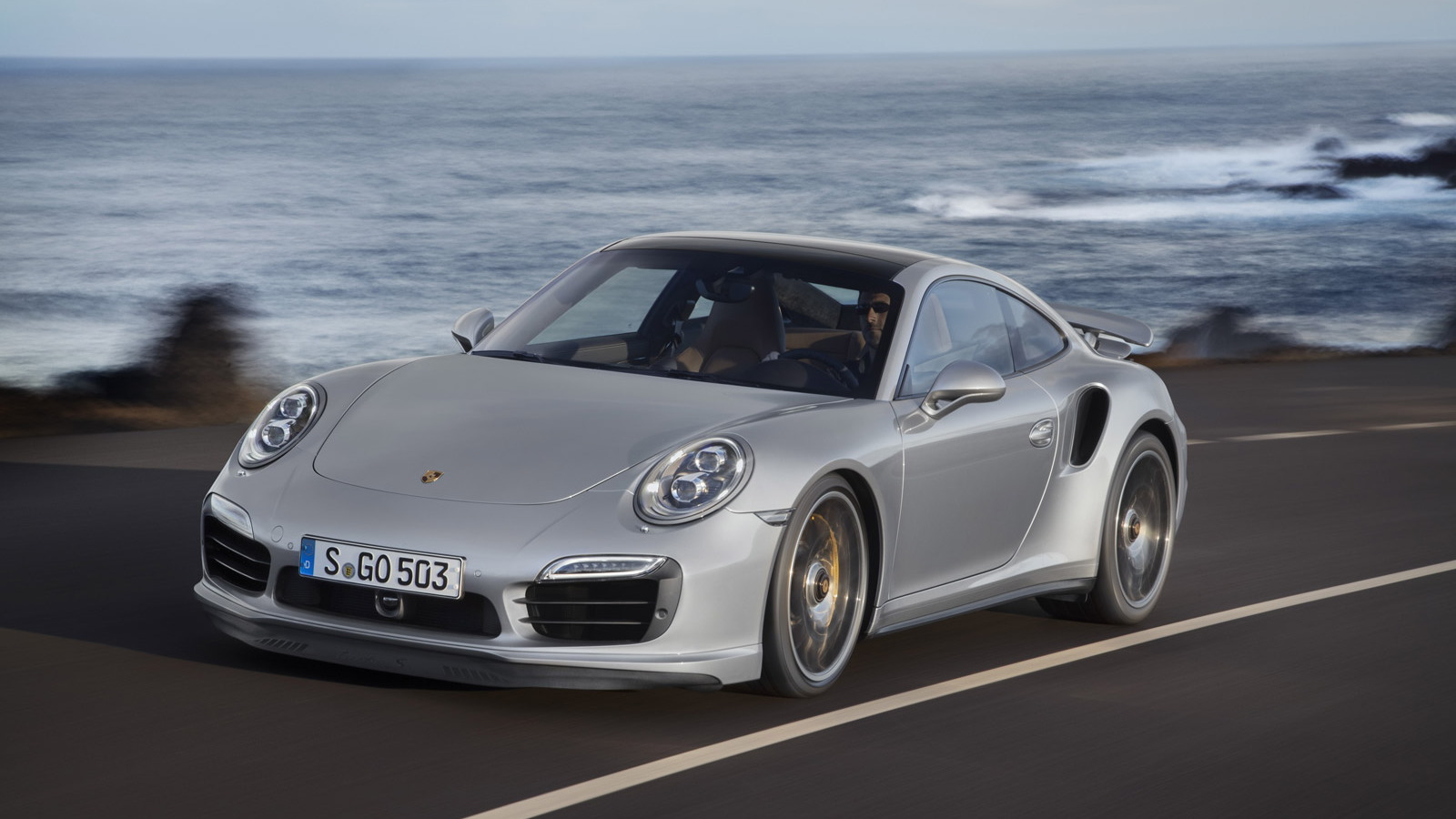 12
photos
The ultimate Porsche 911--for now, until we get a taste of the GT2--got its worldwide reveal today, ahead of a first showing at this September's 2013 Frankfurt Auto Show.

The Porsche 911 Turbo should arrive in the U.S. for the 2014 model year, backed by some new benchmarks for efficiency and of course, performance.

So, what does the latest 991 generation of the Porsche 911 Turbo bring in this anniversary year?

Packing a twin-turbocharged and direct-injected 3.8-liter flat-six engine, the new 911 Turbo rates at 520 horsepower while the more extreme 911 Turbo S benefits from a 560-horsepower rating. That’s up 20 and 30 horsepower, respectively, over the outgoing models.

Power is transferred to all four wheels via Porsche’s seven-speed PDK dual-clutch transmission, which now features an engine stop-start system that even works when the car is coasting in order to maximize fuel economy. The end result is gas mileage of 24 mpg on the European combined cycle, with either model (EPA figures will be released closer to launch). Unfortunately, reports of the manual’s demise on the latest 911 Turbo look to have been accurate as Porsche has made no mention of the three-pedal option yet.

As for the Nürburgring lap time, Porsche states only that it will be well under 7:30.

Key to its track prowess is an updated all-wheel-drive system, which benefits from electronically controlled and activated multi-plate coupling. The system is equipped with a new water cooling function, so that it can direct even more drive torque to the front wheels if necessary.

There is also a new rear-wheel steering system. The system consists of two electro-mechanical actuators instead of the conventional control arms on the left and right of the rear axle. The steering angle of the rear wheels can be varied by up to 2.8 degrees, depending on vehicle speed.

At speeds up to 31 mph, when the front wheels are turned the system steers the rear wheels in the opposite direction. This actually corresponds to a virtual shortening of the wheelbase by 9.8 inches, which gives the 911 Turbo great cornering ability. The system lets the car turn faster into the bend and offers more dynamic steering response. Porsche says the system also makes parking easier.

At speeds above 50 mph, the system steers the rear wheels parallel to the turned front wheels. This is equivalent to a virtual lengthening of the wheelbase by a significant 19.6 inches, helping to improve stability. At the same time, the steering input by the driver leads to significantly faster build-up of lateral force at the rear axle, which responds to steering commands even more quickly.

Unlike previous generations, the latest 911 Turbo is wider than even the 911 Carrera 4 models, to the tune of 1.1 inches. Other unique elements include two-tone aluminum wheels measuring 20 inches across and aggressive intakes in the rear bumper. The 911 Turbo S gets a few additional unique features, including center hub wheel locks and standard full-LED headlights.

Also worth mentioning is the car’s active aerodynamic system, which consists of a retractable three-stage front spoiler and a deployable rear wing, also with three stages of adjustment.In the performance position, all segments of the front spoiler are fully extended to maximize downforce on the front axle. Similarly, the rear wing is extended to its maximum height with the greatest angle of attack. Just changing these items is said to shave around two seconds off the car’s ‘Ring time.

Inside, owners will be treated with luxury that’s almost on the same level as the car’s performance.

Some of the features, either standard or available, include 18-way adjustable seats, leather trim with double cap seams, Bose or Burmester premium sound and camera-based road sign recognition technology.

Sadly, as is the norm for many performance cars these days, the latest 911 Turbo comes with a sound symposer that transmits pseudo engine sounds to the passenger compartment via speakers.