As the silver Grand Cherokee 4xe silently ascended the 18-foot metal "Jeep Mountain" of Camp Jeep outside the 2022 New York auto show, Head of Jeep brand Jim Morrison smiled at me with a devilish grin and pushed the accelerator hard enough for the tires to briefly break traction on the metal track. The future of Jeep and off-roading is instant torque, and Morrison was keen to prove it. 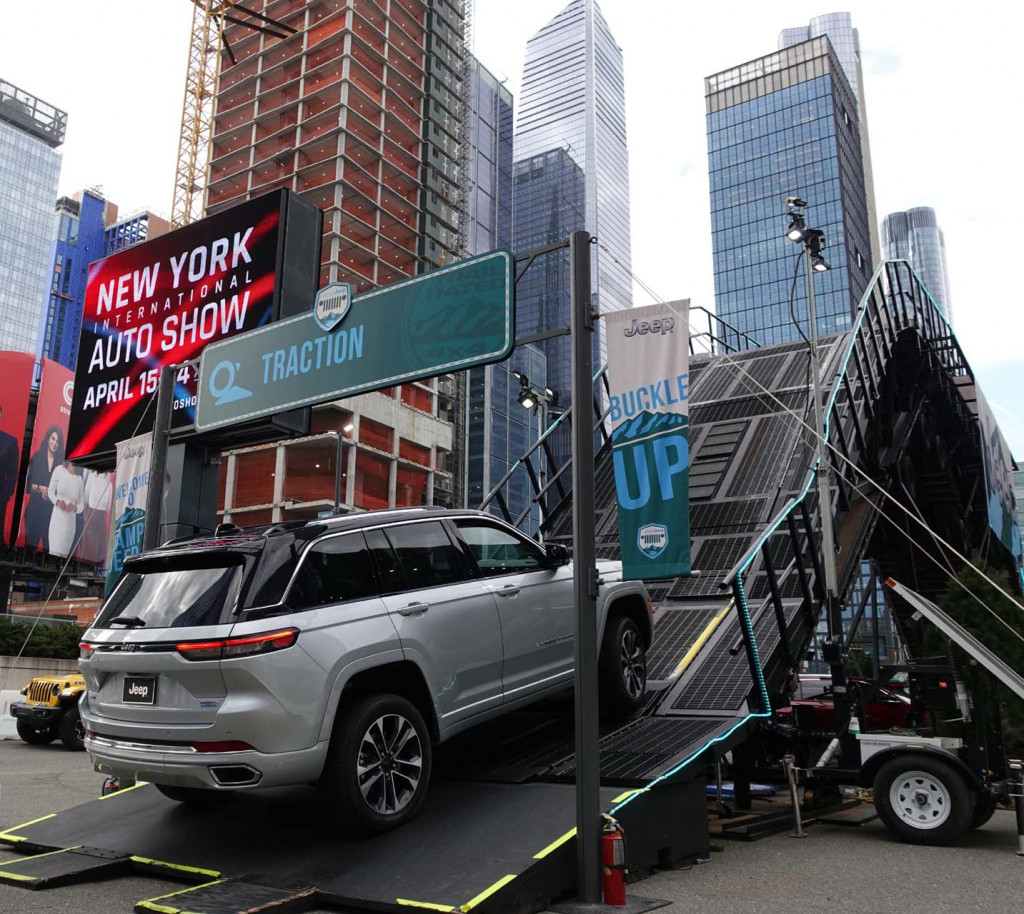 Morrison wasn't shy about the future: The V-8 isn't coming back for performance Grand Cherokees, the Trackhawk nameplate might not return, the 4xe nameplate will expand, and the Gladiator probably is not getting the 392 treatment. He shared all that and more with Motor Authority at an interview in New York. 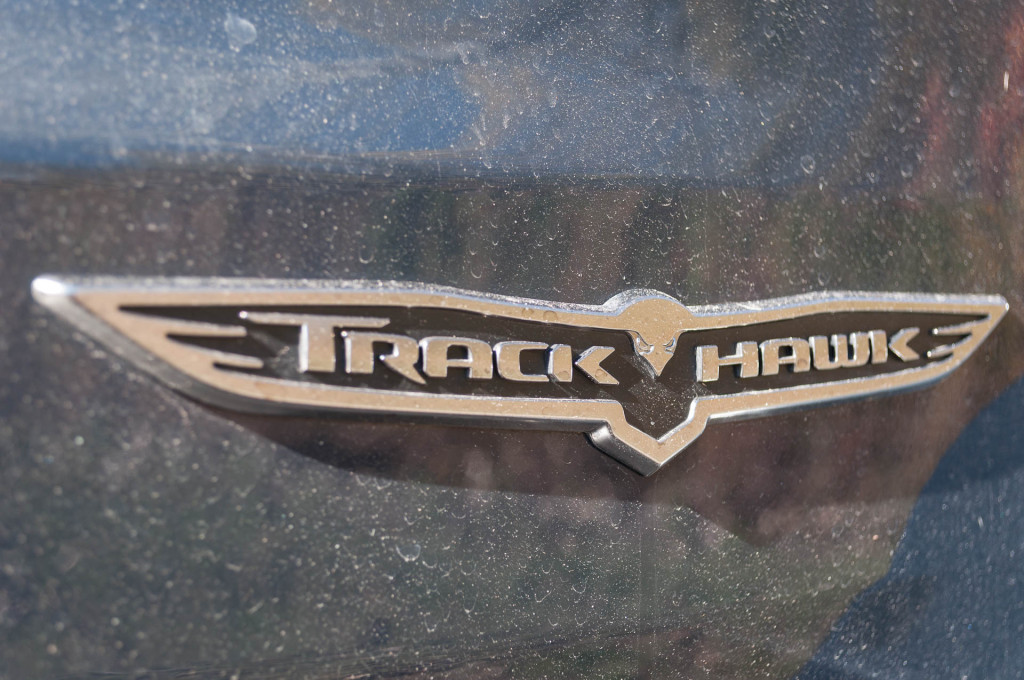 Will there be a new Trackhawk?

Morrison confirmed that the V-8 would die in the Grand Cherokee at the vehicle's reveal in September 2021. This time, however, I asked if the Trackhawk nameplate will return for the WL-generation Grand Cherokee. "I don't know. Could it be a variant of Trackhawk? Electrichawk? Who knows..." the executive trailed off while navigating a banked left-hand turn on the Camp Jeep track. 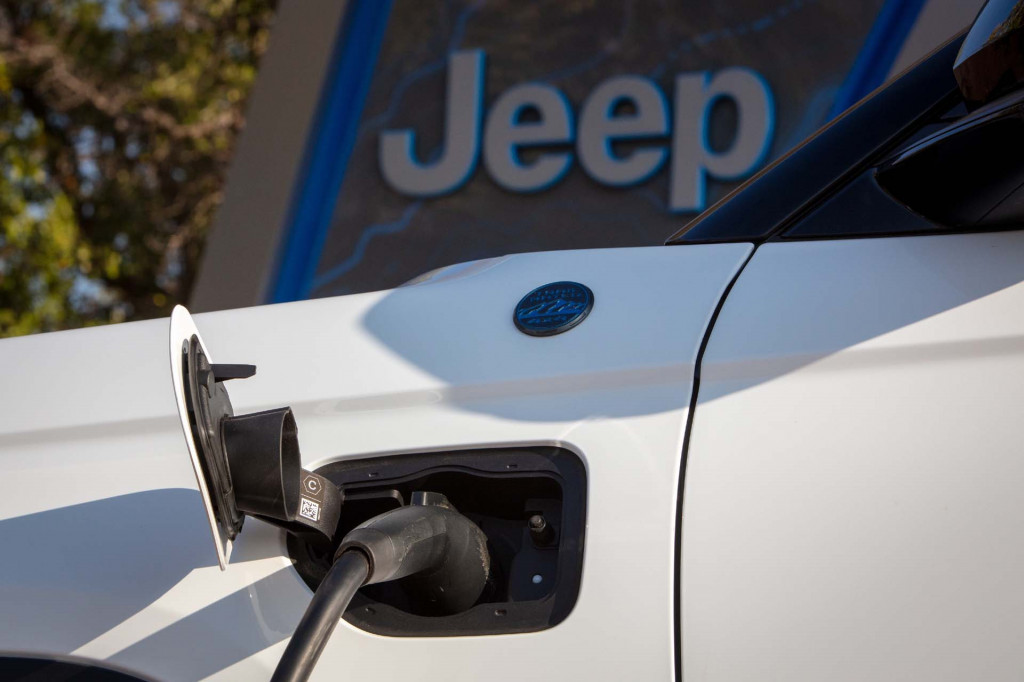 The plug-in hybrid Grand Cherokee 4xe, which is launching now, is 0.9 second quicker to 60 mph and has more torque than the optional 5.7-liter V-8 while also improving efficiency in day-to-day driving. But the 4xe is not a performance variant.

Morrison told Motor Authority there will be performance variants of the WL generation (latest model) Grand Cherokee, but they won't be powered by V-8s.

The executive confirmed that the Wagoneer and Grand Wagoneer will be electrified by calendar year 2025, but he grew rather silent when asked if the electrified powertrain will be based upon the new turbocharged inline-6 announced with the long wheelbase Wagoneer and Grand Wagoneer. That turbo-6 in standard output form produces 420 hp and 468 lb-ft of torque. A high-output version is rated at 510 hp and 500 lb-ft, but Jeep engineers told MA there's room left for more power to be extracted should the need arise. That's without electrification. Adding an electric motor to the 8-speed automatic transmission could raise the powertrain's power to or near around 700 hp—and that's before boosting engine outputs.

When asked if the 4xe plug-in hybrid powertrain will come to the Grand Cherokee L (long wheelbase model) Morrison said, "I think it does make sense." He stopped short of making a formal announcement, noting that while acceptance of the 4xe has been great in the Wrangler, the Jeep is taking a "wait and see" approach to see if customers like it in the Grand Cherokee platform.

While Morrison wouldn't directly confirm the plug-in hybrid 4xe Gladiator is coming, or when, he said, "Well, we have said it (electrification) will come with all our vehicles. Yep, By 2025." Expect the Gladiator 4xe, likely for model year 2024.

Anyone waiting for the 392 V-8 in the Wrangler to be shoved into the Gladiator is about to be disappointed. "I don't know that we'll ever see a 392 in the Gladiator, to be honest," Morrison said. It's a tougher business case, according to the executive, as Gladiator is only about a third of Wrangler's volume. Same deal for the idea of a Gladiator Xtreme Recon package with 35-inch rubber from the factory. Though, Morrison did note the automaker will continue to offer larger tires and different wheels through the Jeep Performance Parts division.

While on the subject of larger rubber, Morrison noted that the Wrangler 4xe on 37-inch tires in Moab at the 2022 Easter Jeep Safari was his favorite package. "It goes anywhere. I couldn't find a place where I couldn't make that go. It's crazy." The 2022 Ford Bronco Raptor will come standard with 37s, but so far Jeep hasn't offered them.

The Grand Cherokee currently has one of the highest tow ratings in its class at 7,200 lb with the optional V-8 (aside from its sibling on the older WK2 platform, the Dodge Durango, which can tow up to 8,700 lb). The V-6 model can tug up to 6,200 lb, while the 4xe PHEV is rated at 6,000 lb. When asked if a non-hybrid version of the new turbo-6 would come to the Grand Cherokee to replace the V-8, Morrison said why bother since the 4xe has so much torque. Towing is the reason, I said, asking if he would be willing to give up the V-8's higher tow rating. "You know me, I don't like ever letting anything go" in reference to the towing rating.

"We might have a different solution for them (those who tow), though," Morrison said. "Like a plug-in hybrid turbo-6," I asked? Morrison quickly said he couldn't say as he tried to quell his trademark smirk.