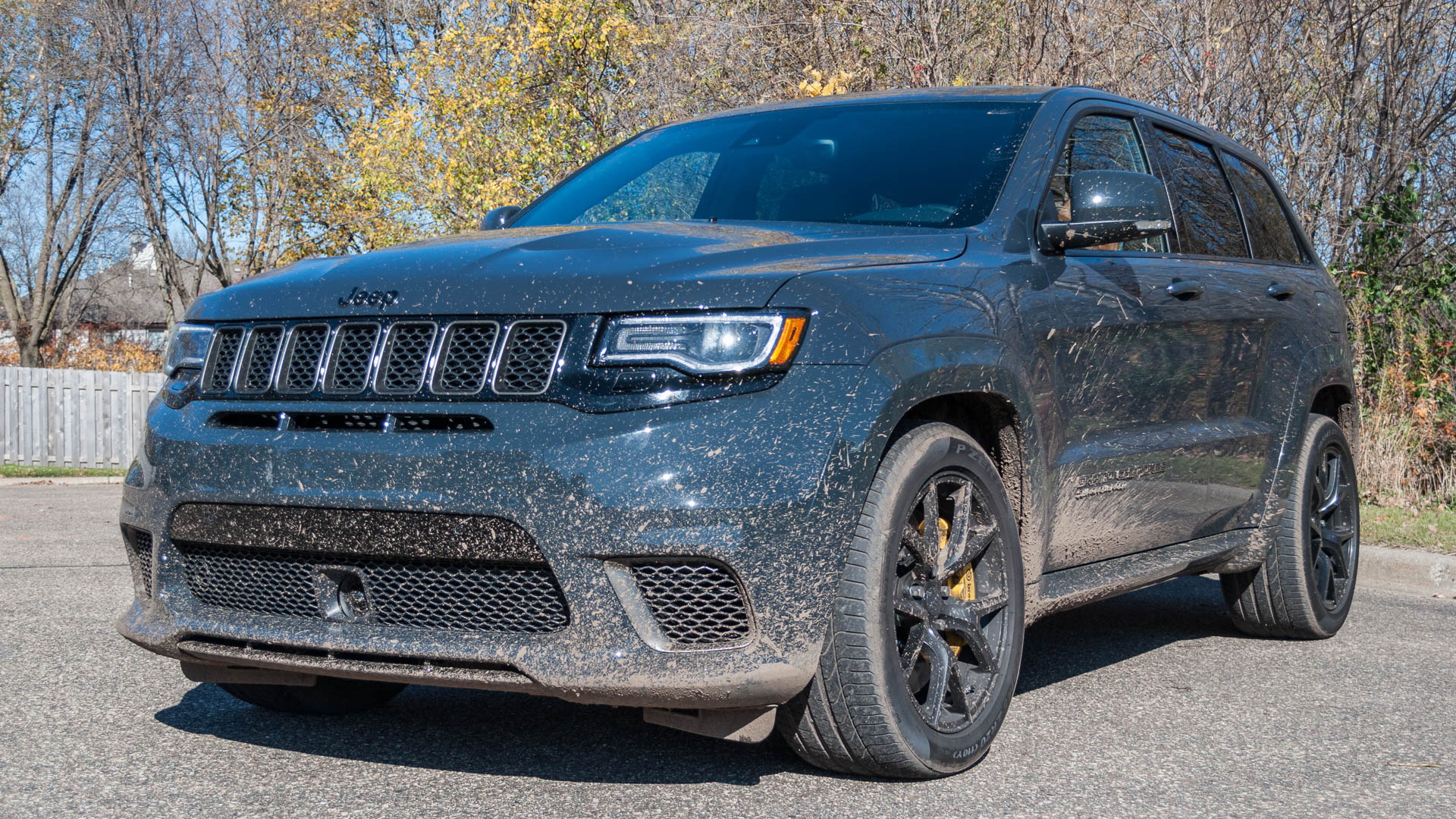 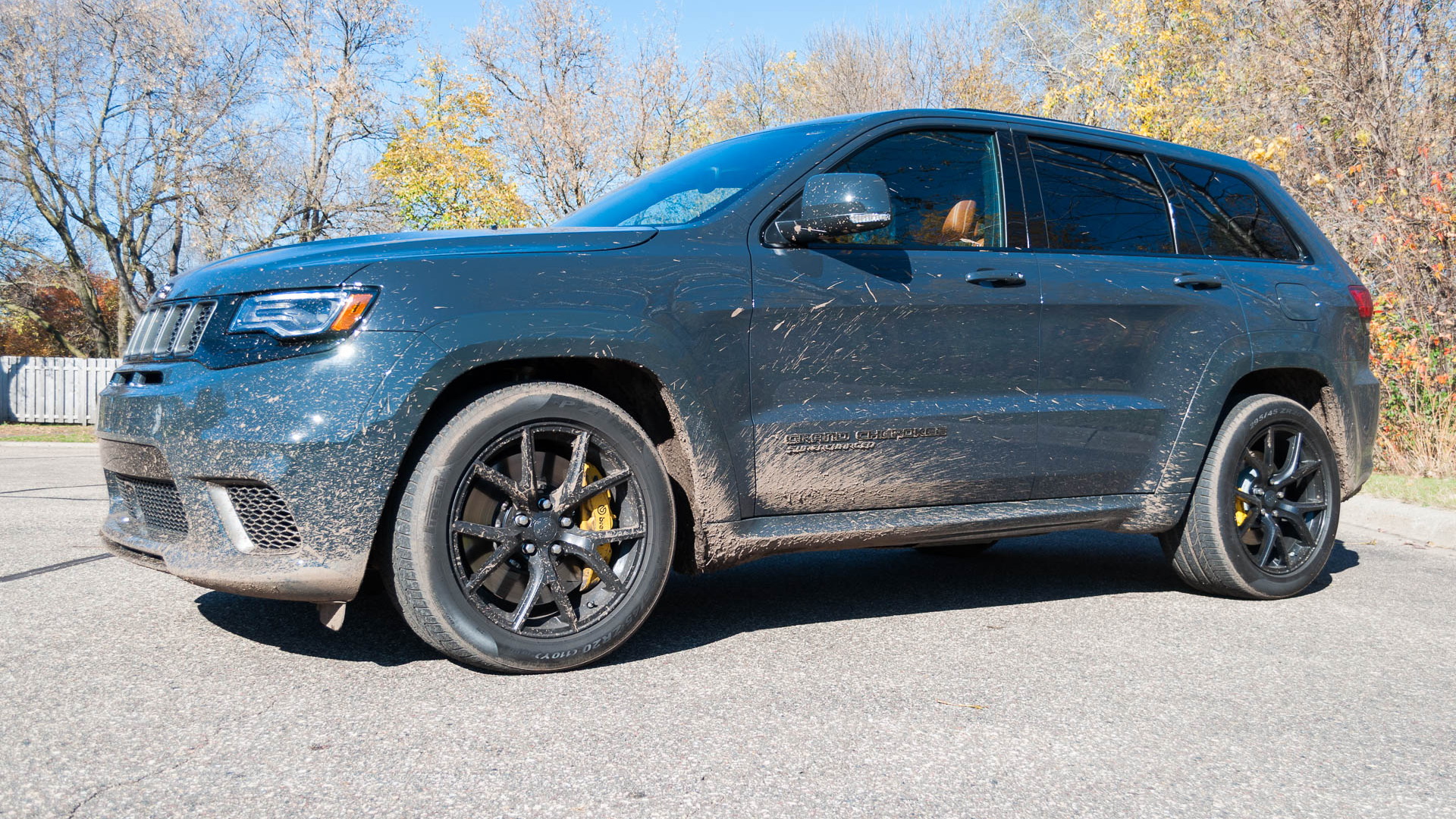 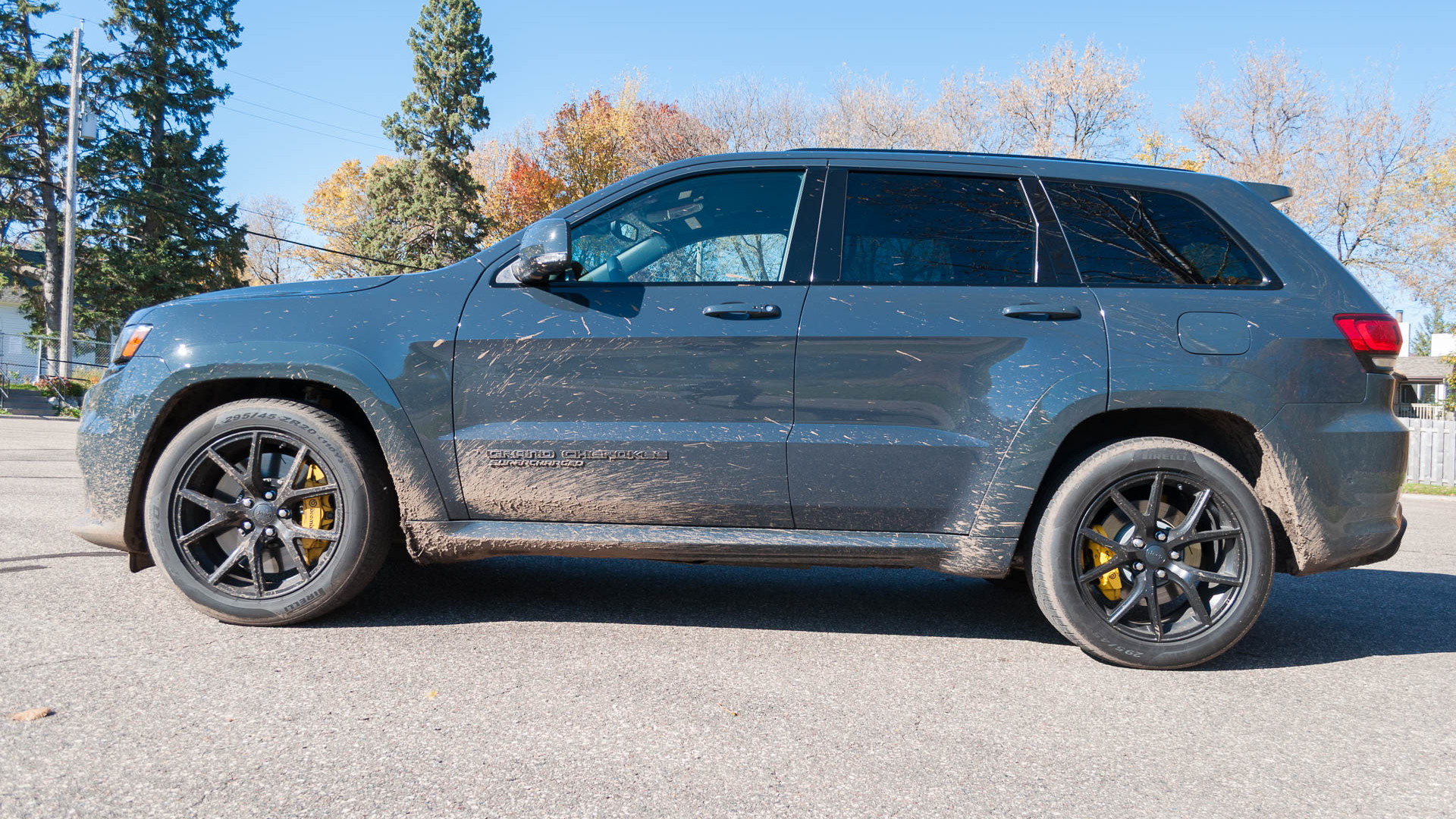 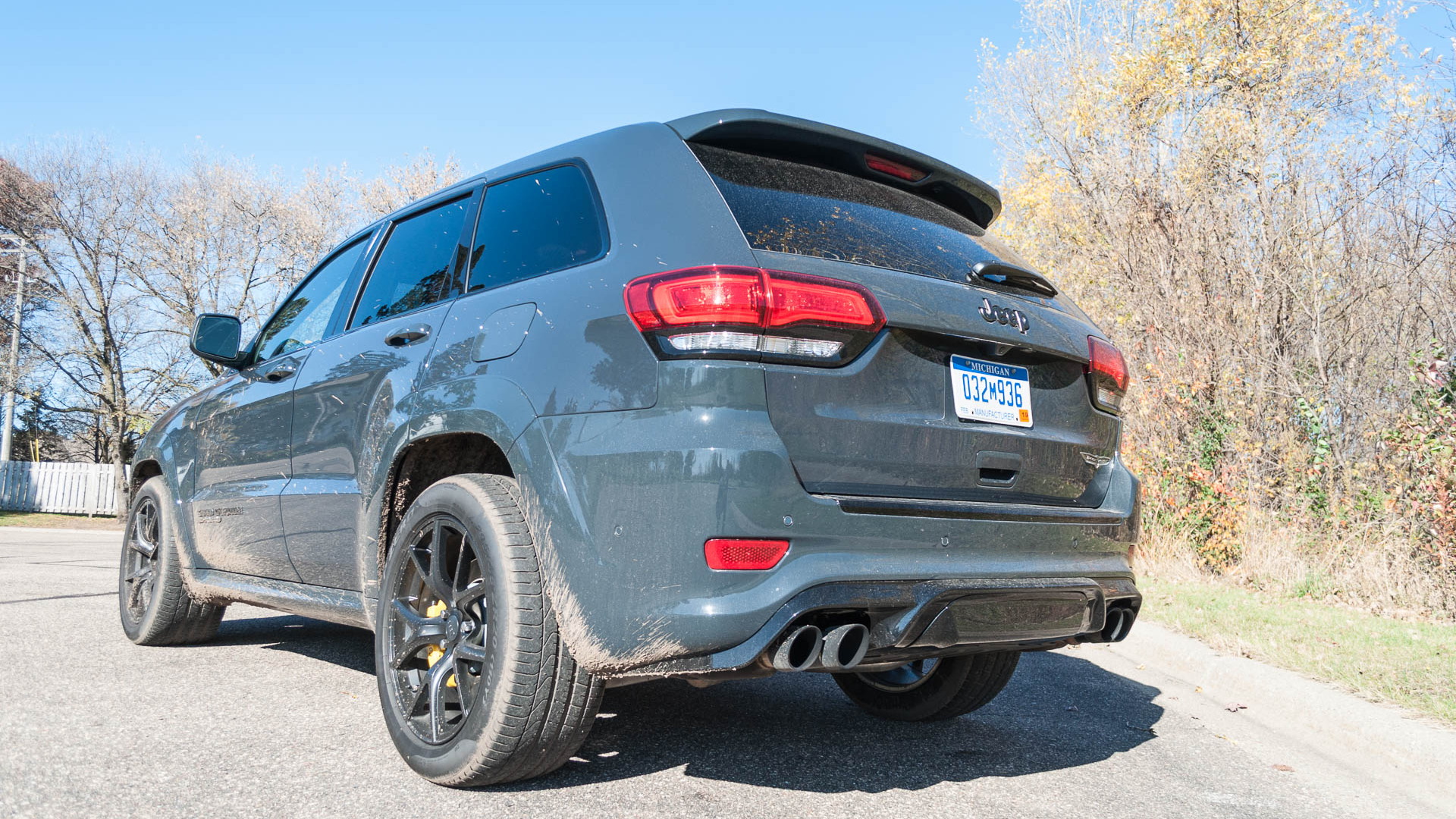 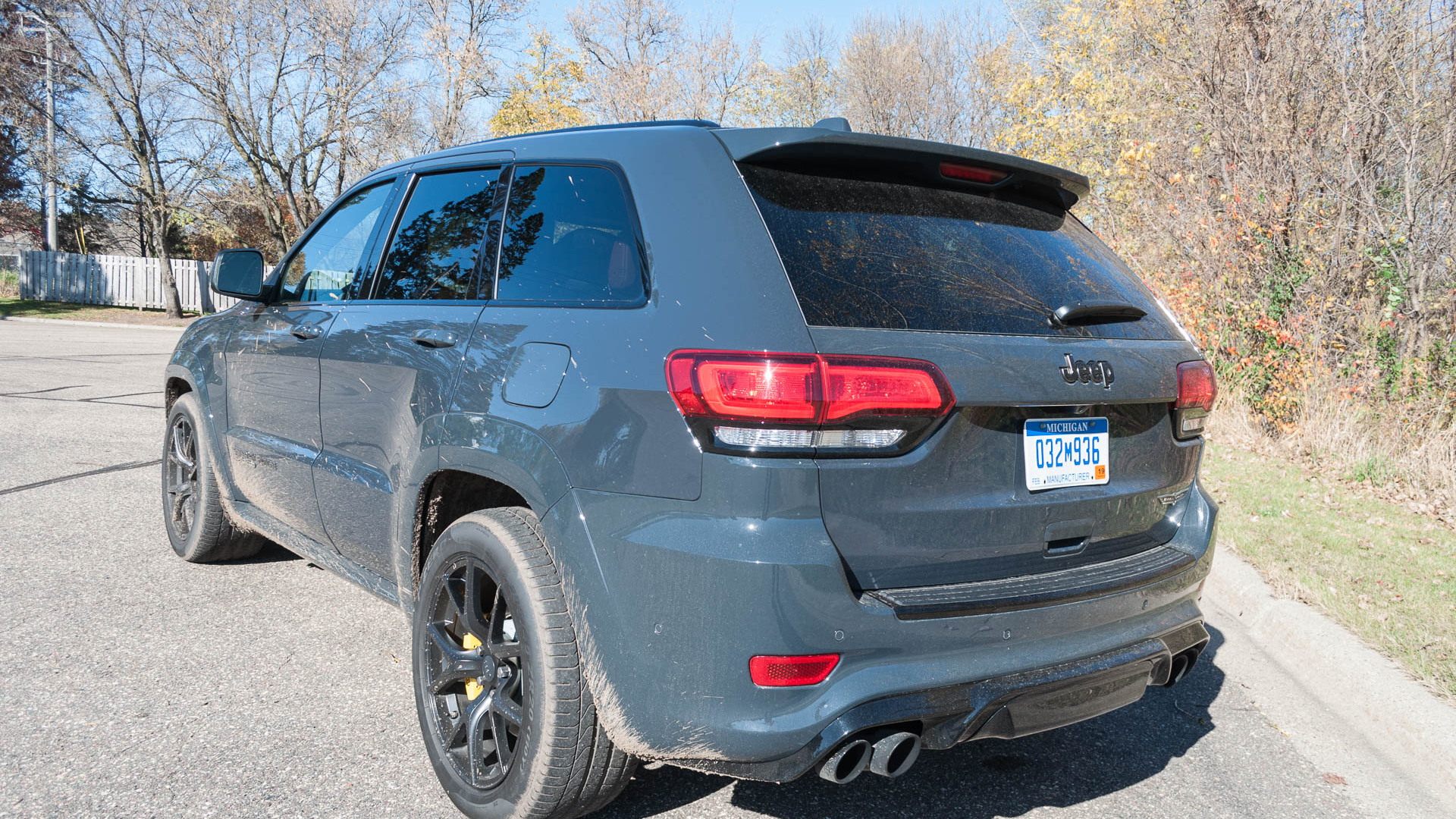 A 707-horsepower SUV that can carry five people and their camping gear or attack a racetrack like a sports car, the 2018 Jeep Grand Cherokee Trackhawk is one of the most ridiculous creations in the automotive universe for all the right reasons.

In our first drive report I said it was the most vicious Hellcat you can buy, and I still stand by that statement.

Experiencing the Trackhawk on the track and back-country roads of Portland, Maine, is vastly different than living with it in the real world. Recently, I had the opportunity to live with the Trackhawk for a week, and I learned a handful of things from the experience.

Here's what you need to know about what it's like to live with the Jeep Grand Cherokee Trackhawk. 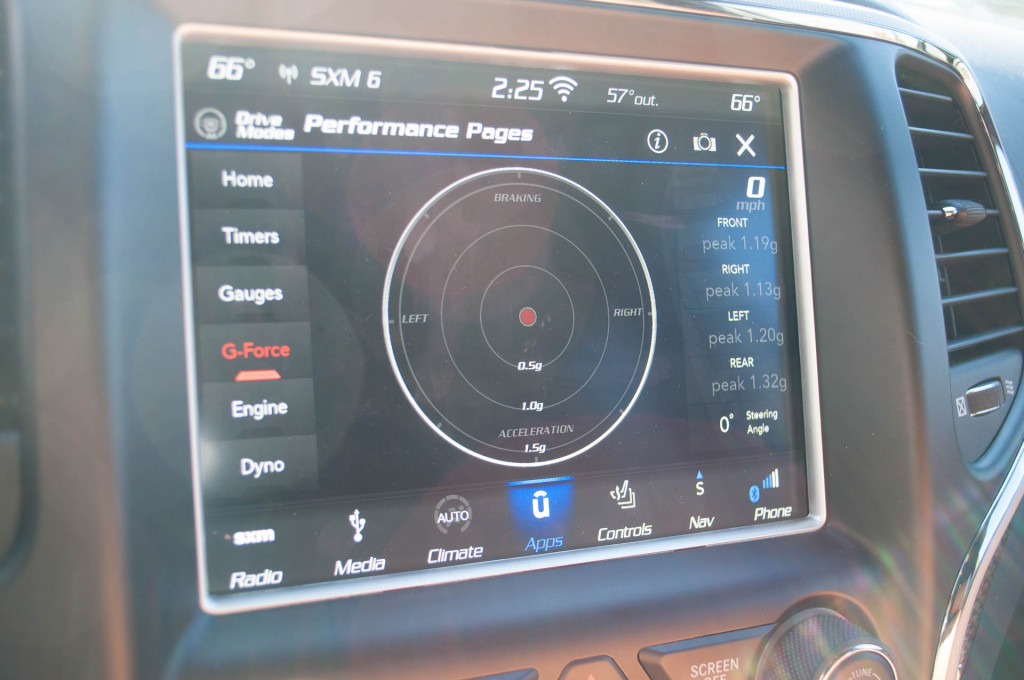 Numbers do the talking, and they speak volumes. Lurking under the hood is a 6.2-liter Hemi V-8 force-fed by a 2.3-liter supercharger pushing 11.6 pounds of boost to create 707 horsepower. All that thrust is routed through a strengthened all-wheel-drive system, which helps make the Trackhawk capable of slaying the 0-60 mph run in just 3.5 seconds, blasting through the quarter mile in 11.6 seconds, and reaching a top speed of 180 mph. I've tested the 0-60 mph claim, and nearly achieved it out of the box with zero practice, while others have already beaten it, doing the deed in just 3.4 seconds. 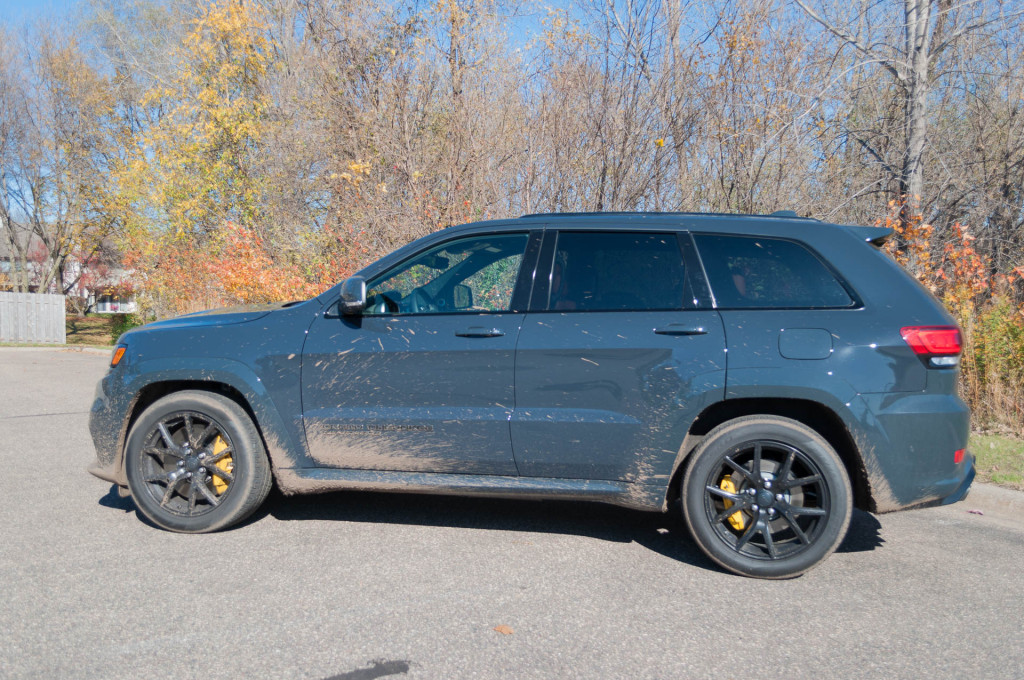 Pull up to a stoplight and onlookers will have little idea what you're packing under the hood. If they know what to look for, they'll notice the quad exhaust tips, the extra vents for cooling up front, and the vented hood. The Trackhawk also has specific wheels, a supercharged badge on the side, and a Trackhawk badge on the tailgate, but that's it. Only a true car enthusiast is going to know what this is. Just wait for the looks you'll get when you smoke 'em from when the light turns green. 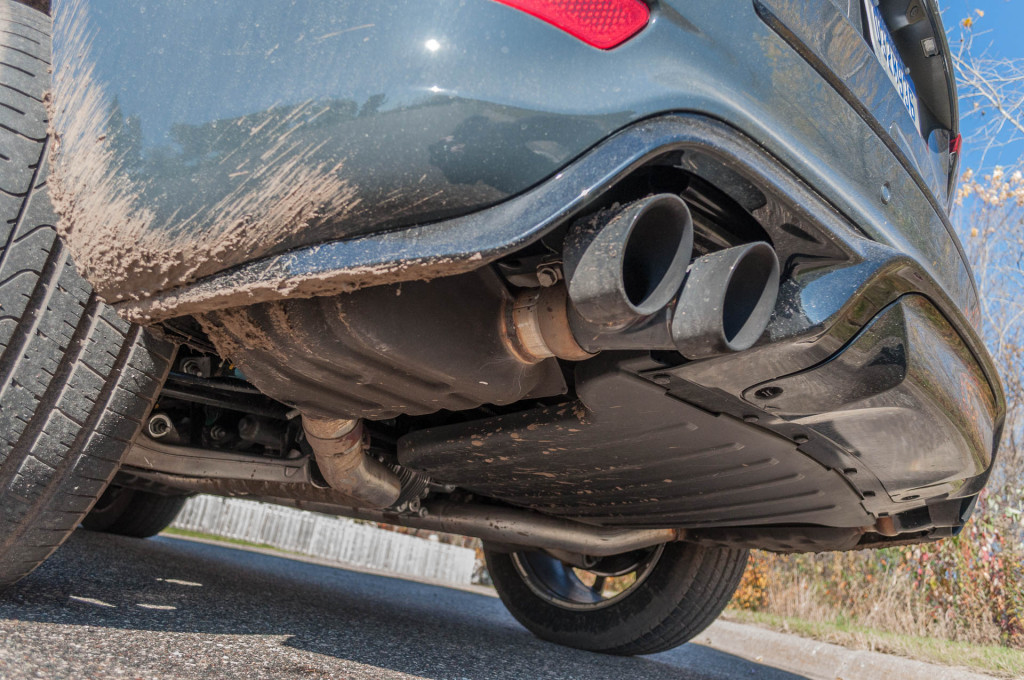 Hellcats are loud. In fact, the Dodge Challenger SRT Hellcat is the only car I've seen set off car alarms with only a cold start. The Trackhawk has the same exhaust system, except for the mufflers. Those mufflers are borrowed from the Dodge Durango SRT to quiet it down, and that it does. Cold starts aren't nearly as loud as they are with other Hellcats. The idle isn't as loud either, and neither is the engine when simply loping along. It isn't until you bury the throttle that you get to hear the familiar Hellcat roar. 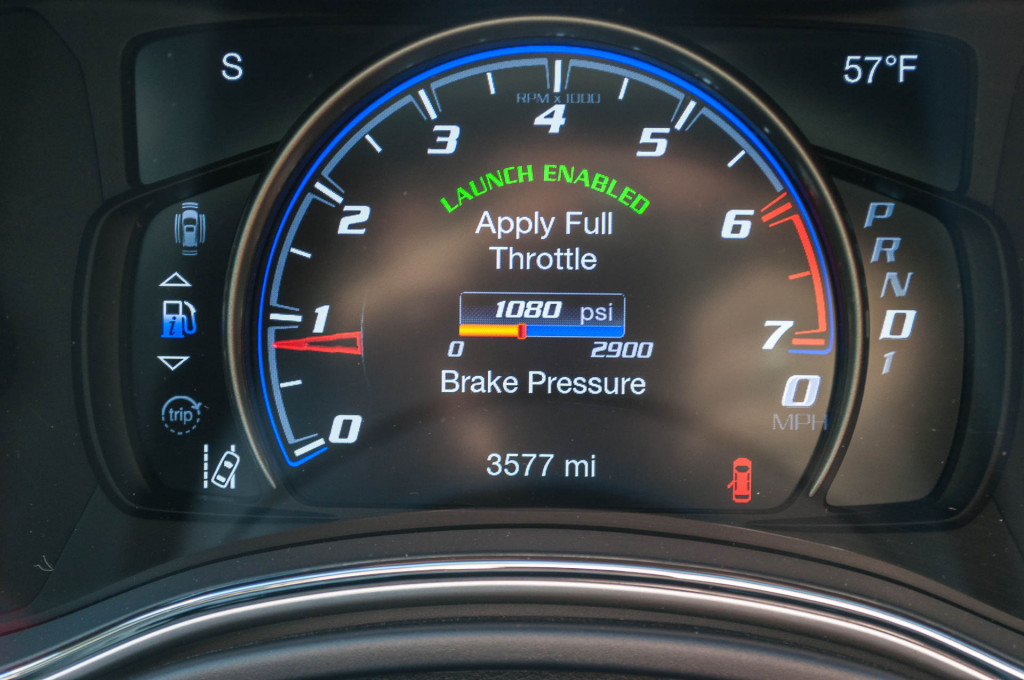 It has a party trick

The Trackhawk's launch control system preps the powertrain and assists you in hurtling 5,363 pounds of Jeep forward with 1.4 Gs to hit 60 mph from a standstill in just 3.5 seconds. For reference, the Dodge Challenger SRT Demon, which is essentially a factory-prepped drag car, launches with 1.8 Gs of force off the line using barely street legal Nitto drag radials on a prepped (really sticky) dragstrip. The Trackhawk does it with barely less force on any old street with three-season rubber. In fact, the Trackhawk will launch harder than the Demon on a street by SRT's estimates. 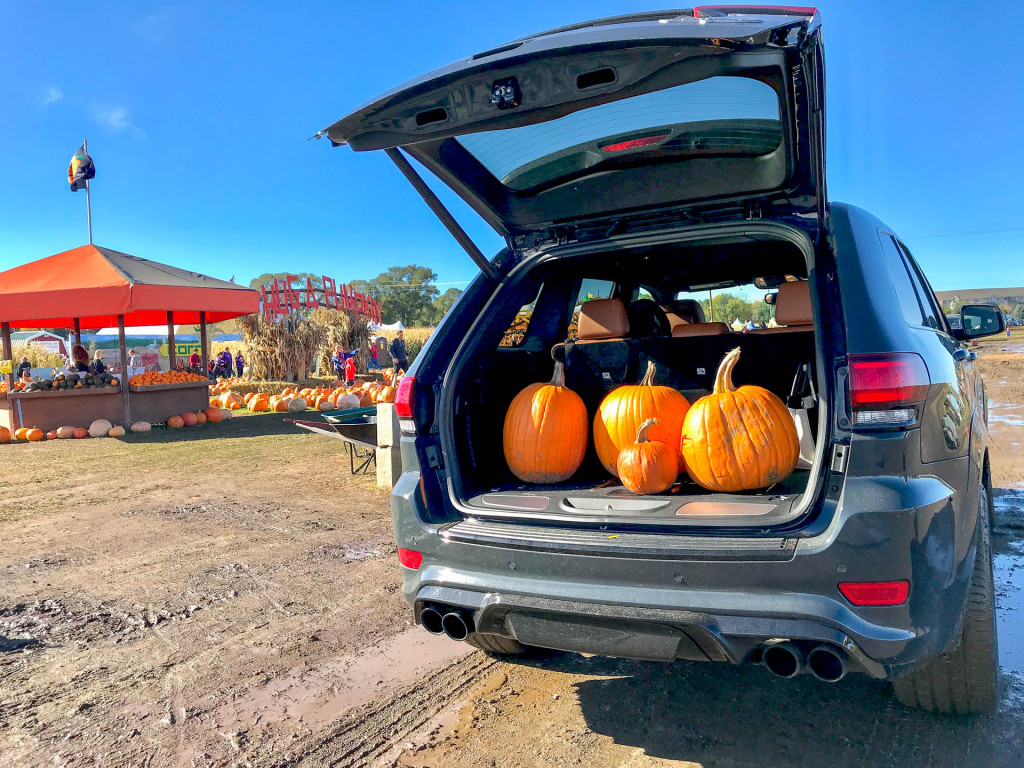 Hauls all the things

From the groceries and kids to pumpkins at the farm to ass on the track, the Grand Cherokee Trackhawk will haul no matter the situation. It's the quickest production SUV on the planet, and that's no joke. It can tow up to 7,200 pounds of whatever you have, more than enough for a race car or a boat. Problem is, it might be faster than the race car. 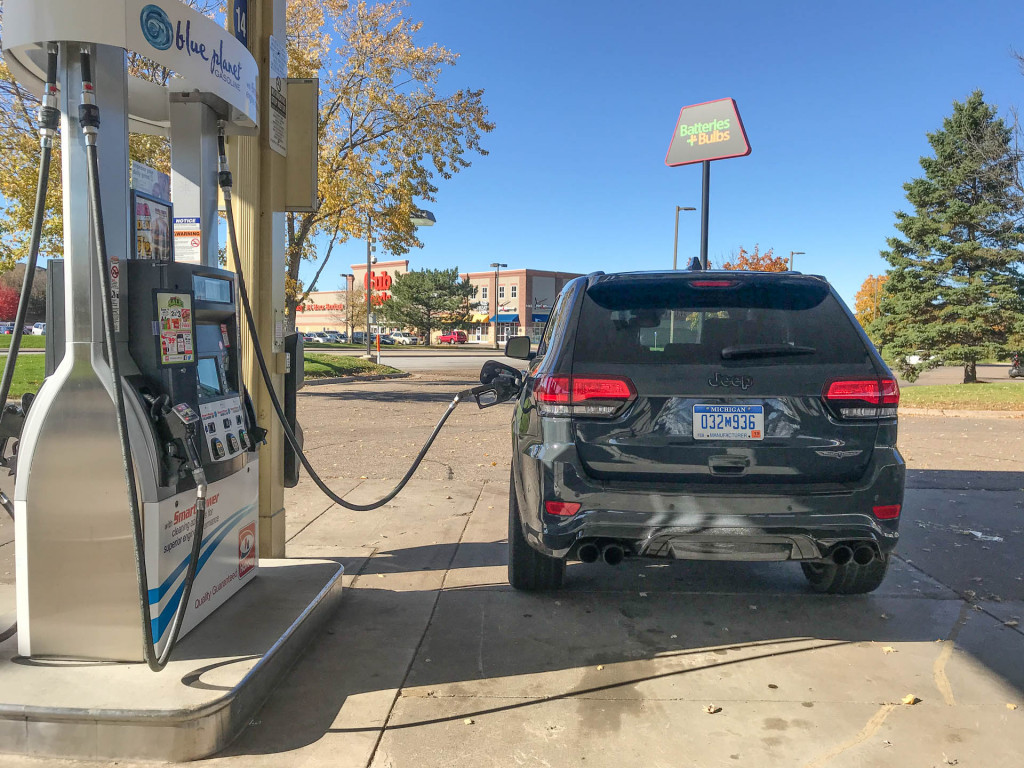 If fuel economy makes your list of considerations when shopping for your next ride, the Trackhawk won't. The EPA rates the Trackhawk at 11 mpg city, 17 highway, 13 combined. There's no way to sugarcoat this: those aren't good numbers. In reality, you'll see exactly what's advertised. I averaged 13.2 mpg lugging the Trackhawk around in mixed, everyday driving. Once I started romping on it with some hard launches, that average quickly dropped to 11.6 mpg, and that even included some highway driving. In a very unscientific, and short, highway test, I was able to muster an average of 16.8 mpg. If you are buying a Trackhawk, you better have a large fuel budget. 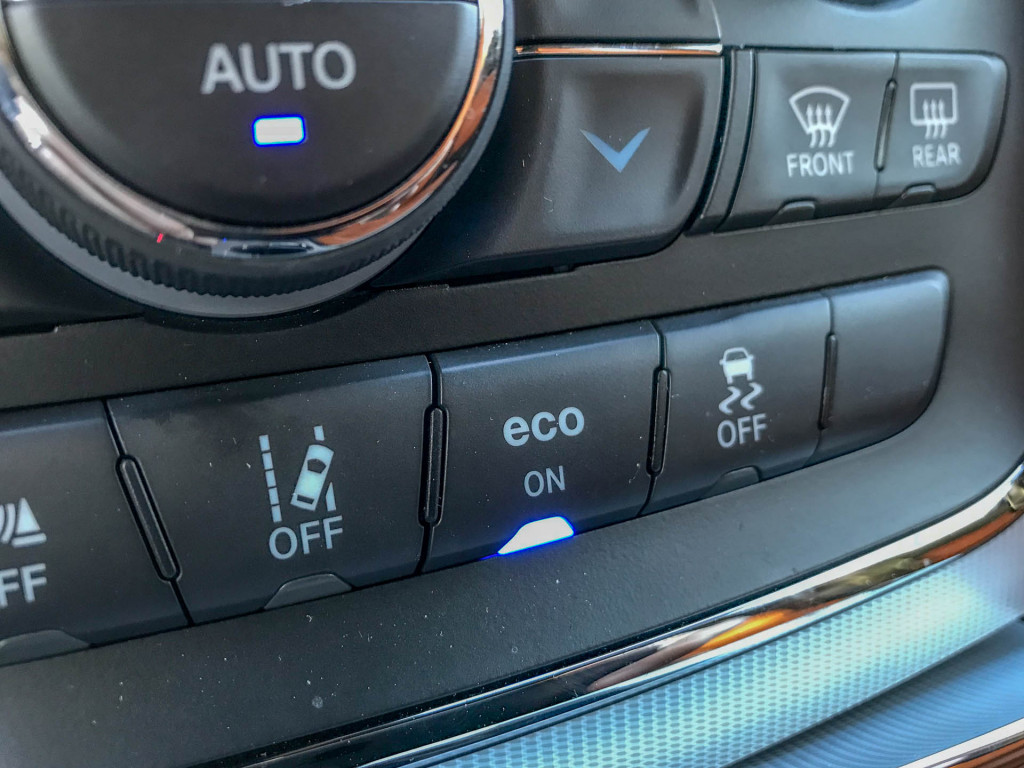 As ridiculous as it sounds, the Trackhawk has an Eco mode that is enabled by a button on the dashboard. It seems like the most pointless feature in the most powerful production SUV in the world, but hey, why not? Enabling Eco mode changes the transmission shift schedule, engages second gear starts from a complete stop, and reduces maximum torque to 500 pound-feet. It also completely changes the accelerator pedal's calibration due to the drop in power. The result? It feels like you ripped the claws out of the Hellcat, and are now driving a "measly" Grand Cherokee SRT. 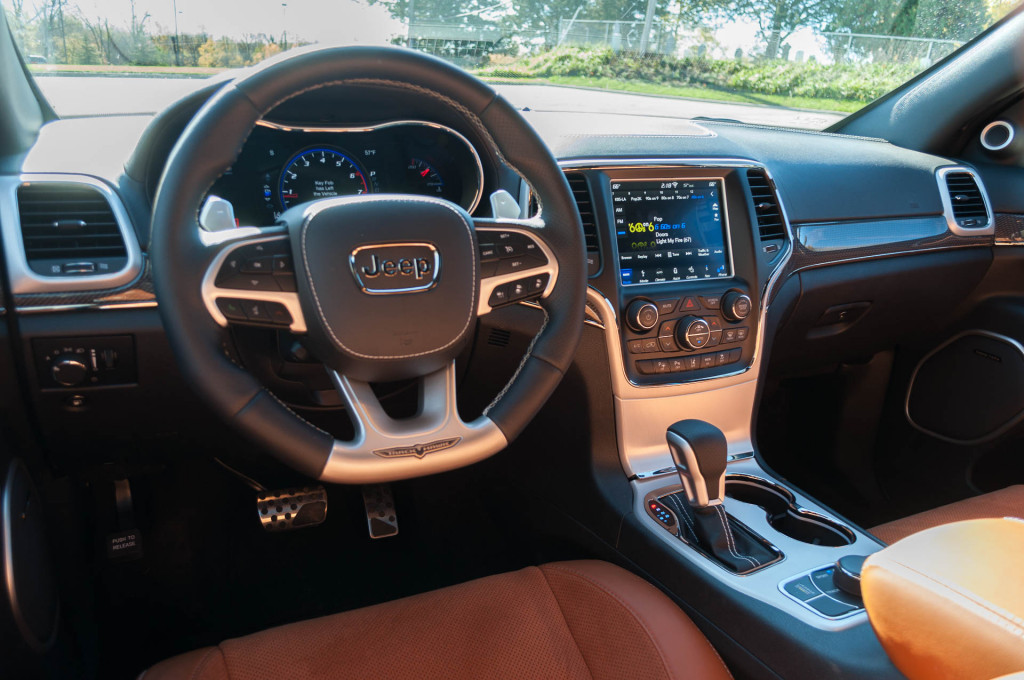 At the end of the day, this is still a Grand Cherokee, it just has the heart of a Hellcat. It's comfy inside, and is well-packaged overall. Car seats fit well with no issues, it has plenty of room in both seating rows and in the cargo area, and the Uconnect infotainment system is still among the best in the business. The Trackhawk is just like your neighbor's Grand Cherokee with its 3.6-liter V-6, only it has 707 horsepower and can move your insides around as it launches off the line.