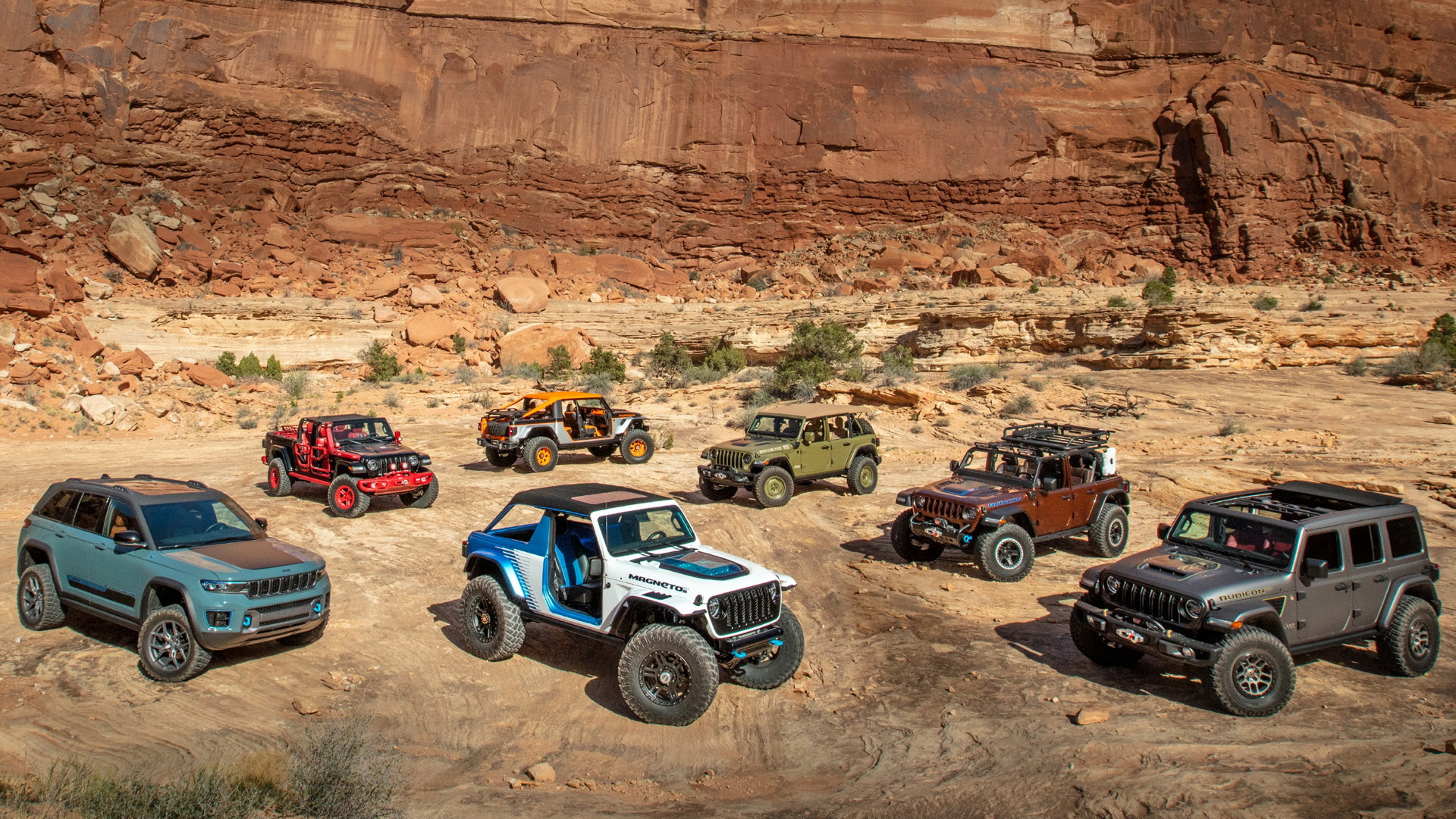 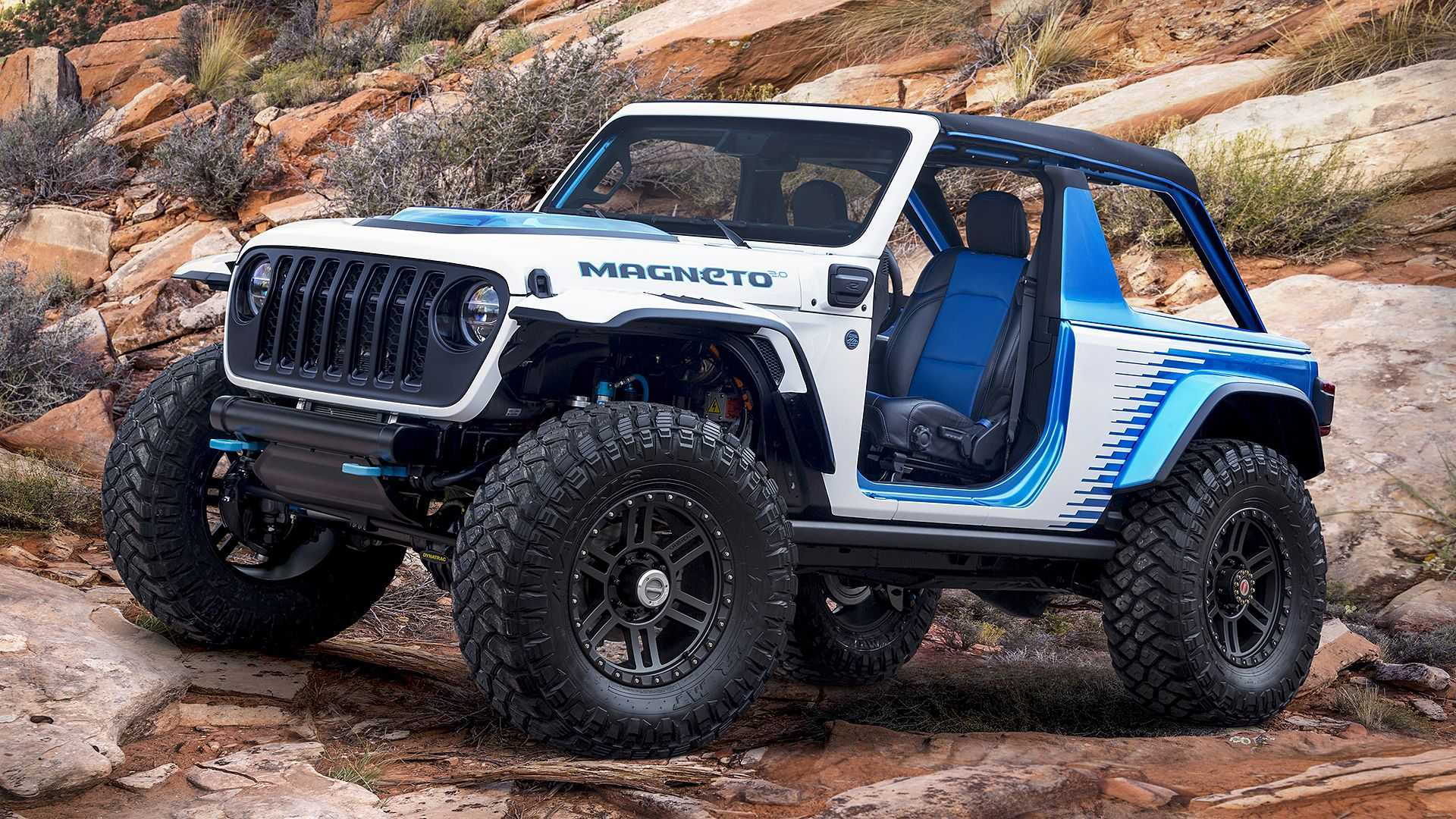 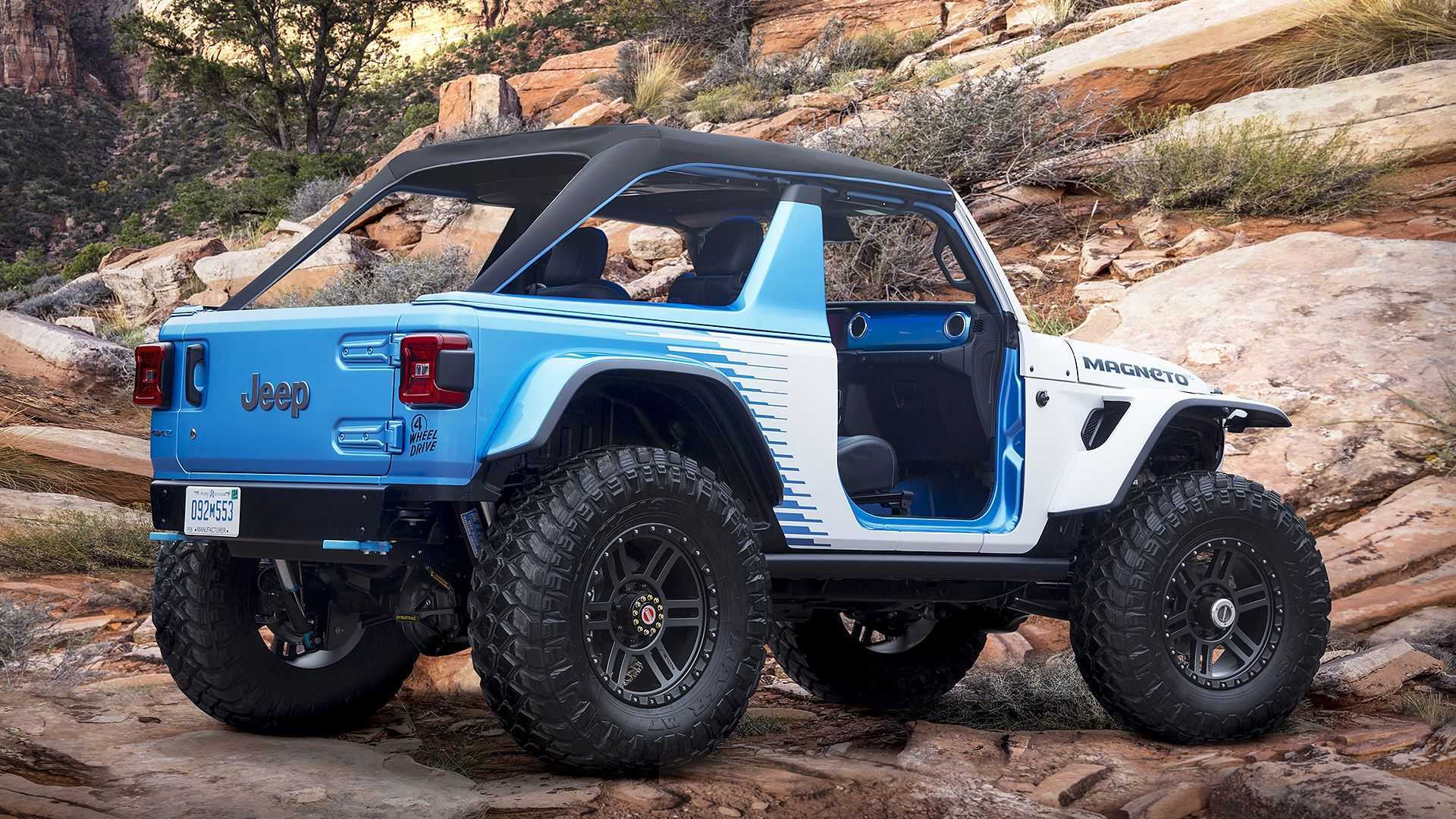 Jeep has provided an early look at some of its concepts set to debut at the 2022 Easter Jeep Safari running April 9-17 in Moab, Utah.

Jeep Wrangler Magneto 2.0 concept: Jeep demonstrated last year that an electric Wrangler can handle the rough stuff, via the original Wrangler Magneto concept. With version 2.0, Jeep decided to dial the performance up higher. Much higher. There's still a 70-kilowatt-hour battery, separated into four units for even weight distribution, but now there's 625 hp and 850 lb-ft of torque to go with it, up from the previous 285 hp and 273 lb-ft. It means the 0-60 mph time is now just two seconds.

The term Magneto is probably most famous for the Marvel Comics character of the same name, but its origin is the term used for electric motor-generators with permanent magnets. Don't be surprised if the name is picked up for a future electric Wrangler headed to showrooms. Jeep aims to have an electric option in all SUV segments by 2025, including the Wrangler's segment. The first electric Jeep is coming next year.

Jeep Grand Cherokee Trailhawk PHEV concept: The Grand Cherokee gained a plug-in hybrid option this spring in the form of the 4xe, and the electrified SUV has served as the basis for an Easter Jeep Safari concept. The theme for the concept is overlanding, and as a result it features useful items like a roof rack, roof liner, rock rails, and 33-inch tires, as well as vinyl side graphics for protection against debris.

No change was made to the powertrain, meaning a 2.0-liter turbocharged inline-4 and pair of motor-generators are packed inside. One of those motor-generators replaces the engine starter motor and the other is integrated with the transmission, in this case an 8-speed automatic. Peak output is 375 hp and 470 lb-ft.

Jeep Rubicon 20th Anniversary concept: It's hard to believe that it's been 20 years since the Wrangler received its Rubicon grade. Named after California's Rubicon Trail, the Wrangler Rubicon proved to be a hit when it first went on sale in the summer of 2002, as it offered buyers top-shelf off-roading gear straight from the factory. The list included Dana 44 axles, front and rear lockers, a disconnecting sway bar, rock rails, wheel flares, and 31-inch tires.

Jeep D-Coder concept by JPP: Mopar, which offers a range of parts for Jeep vehicles via its Jeep Performance Parts branding, was also tasked with developing a couple of concepts for the Easter Jeep Safari. One of them is the Gladiator-based D-Coder, which is fitted with 35 parts from the Mopar catalog—each of them with a QR code to make them easy to find for onlookers.

Jeep Birdcage concept by JPP: The second concept from team Mopar is the Wrangler 4xe-based Birdgage. It was designed as an off-roader for wide-open areas, and has a custom cover for the cowl area for when the windshield is removed.

Other features include a 2-inch lift with Fox shocks, a custom front bumper with an integrated skid plate, aluminum taillight guards, 17-inch beadlock wheels with 37-inch tires, and a Rhino-Rack cargo basket that can hold up to 600 pounds.

Jeep Bob concept: One of the cooler concepts is the Gladiator-based Bob. The name comes from the bobbing trend, where a pickup's bed is shortened in order to improve departure angles for off-roading. Here, a full foot has been removed, and the concept has also gained custom steel front and rear bumpers to further improve its approach and departure angles.

The concept also stands out thanks to a mix of colors that include both gloss and matte finishes. Inside, bright bed-lined floors plus custom trimmed seats also create a loud statement. A vented carbon hood adds a notable performance appearance and ensures better airflow to the engine, which in this case is the Gladiator's 3.0-liter V-6 diesel.

Jeep ’41 concept: This final concept pays honor to the original Willys MB that served during the Second World War and is the inspiration behind the modern Wrangler. It sits on a 2-inch lift kit and 17-inch retro wheels with 35-inch tires.