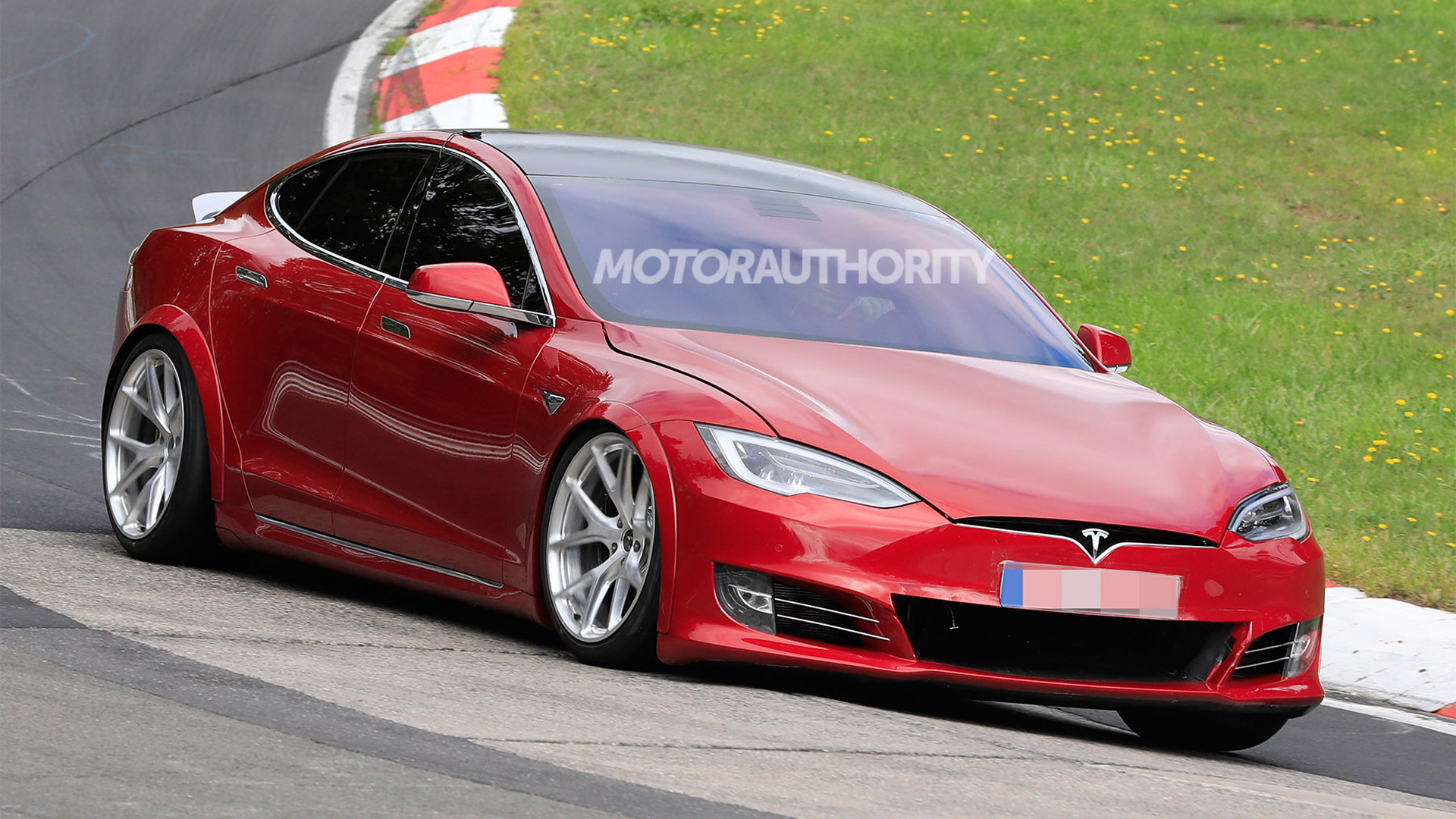 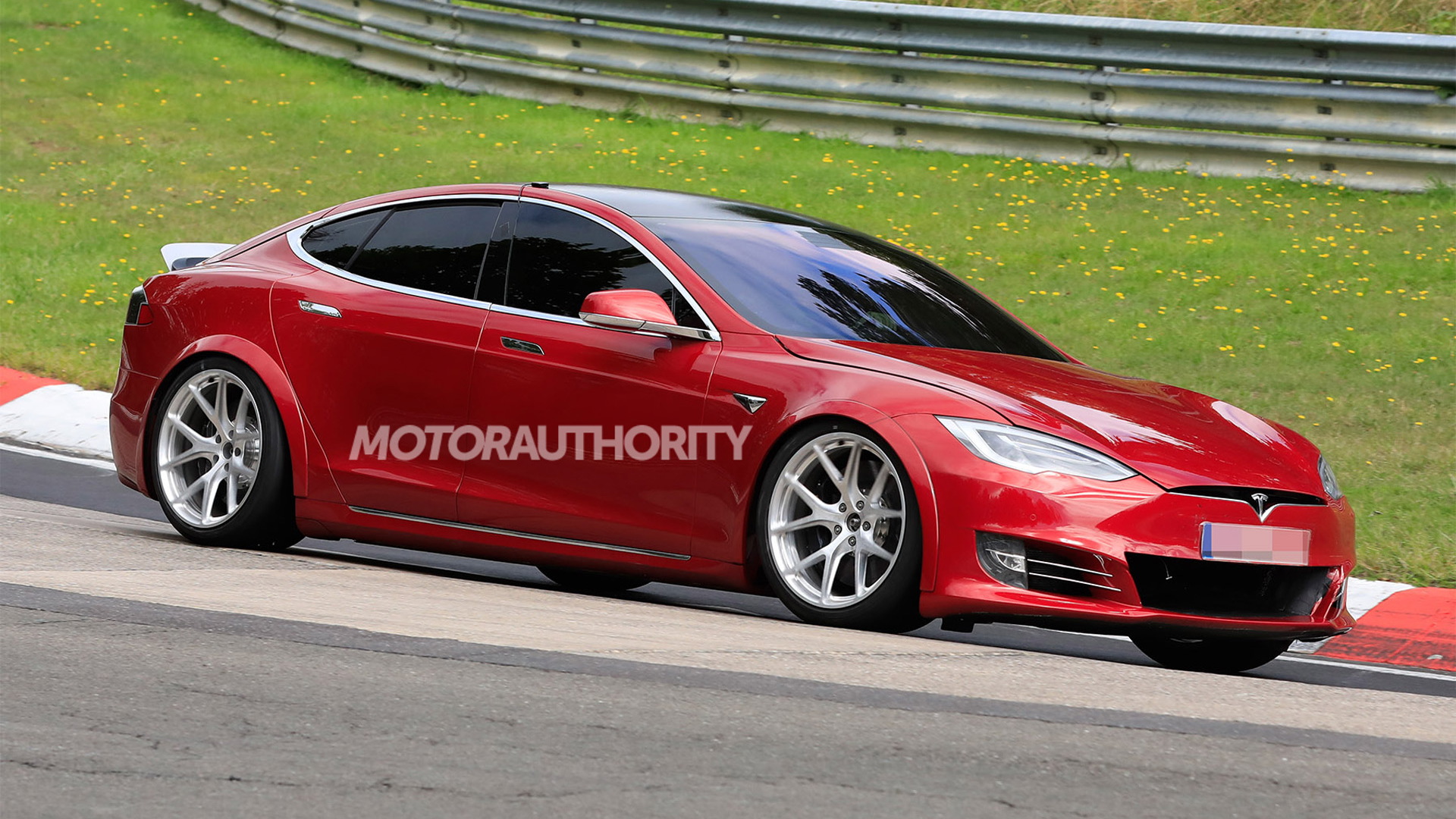 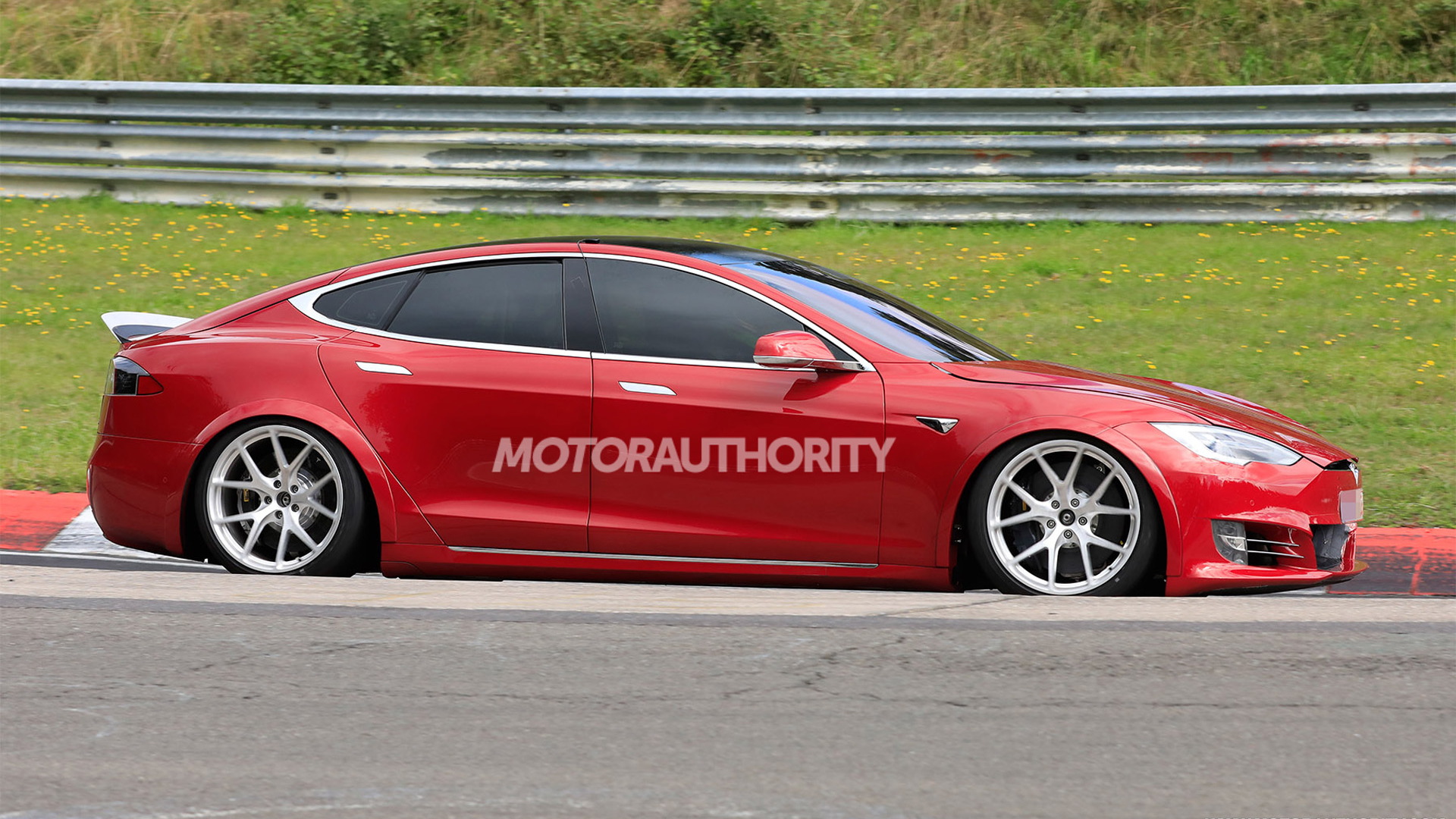 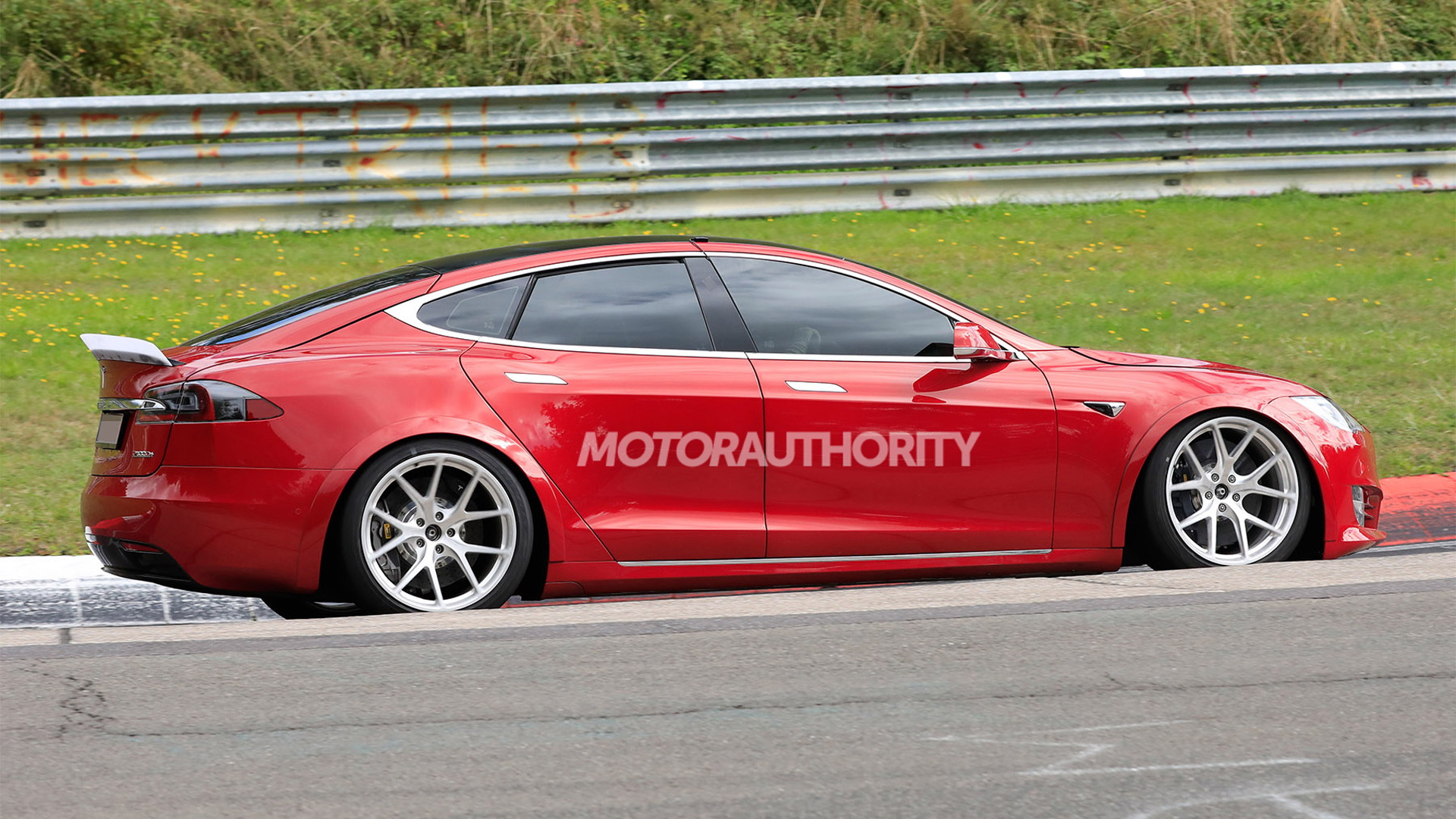 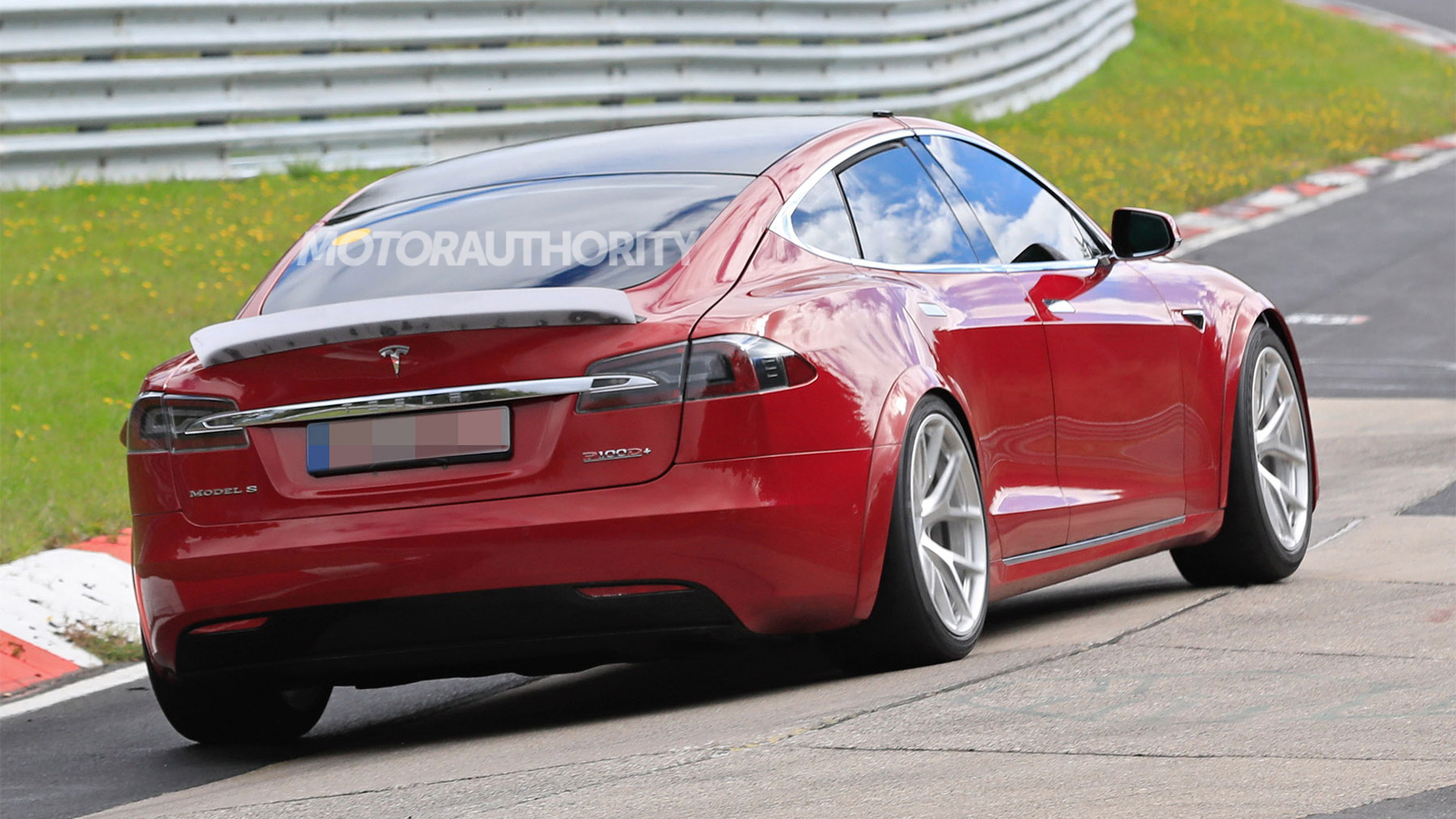 Tesla CEO Elon Musk recently said a Model S would hit the Nürburgring this week and now we have spy shots of the electric sedan stretching its legs on the notorious German racetrack.

This isn't like any of the Model S sedans available on Tesla's website, though. It's a prototype for a new performance flagship called the Model S Plaid, which Musk on Wednesday said will be ready in about a year.

In case you're wondering, the name is a nod to 1987's classic comedy "Spaceballs," where Plaid and Ludicrous are dangerously high speed levels for a spaceship. We've already got a Model S Performance with Ludicrous mode so naturally Plaid should come next.

Plaid won't simply be a performance mode like Ludicrous but an entirely new powertrain for the Model S that's confirmed to pack more power than the Model S Performance. It's expected to feature a three-motor setup with two motors at the rear axle and the third motor at the front axle.

The Model S Performance comes with a 503-horsepower motor at the rear axle and a 259-hp motor at the front, and with Ludicrous mode activated the car will sprint to 60 mph in just 2.4 seconds. A more powerful setup could potentially see the acceleration figure dip even lower for the Plaid.

The car will also have some chassis upgrades designed to make maximum use of the extra juice. Judging by the fender extensions on the prototype, Tesla may incorporate a wider track front and rear. Huge wheels wrapped in track-focused, street-legal Michelin Cup 2 R tires are fitted to the tester, and it also appears that the car is running carbon-ceramic brake rotors. Extra air passages in the lower front fascia and a makeshift rear spoiler can also be seen on the spy shots. Finally, it looks like the prototype is also riding on lowered suspension.

All of these upgrades are aimed at honing the Model S for the track. A separate Plaid prototype has already lapped Laguna Seca in a time of 1:36.555, which is faster than any production sedan. Tesla said its Nürburgring testing is only to gather data, but a record attempt in the future is entirely possible. Tesla had Thomas Rutsch on hand for the testing, a German racer with extensive knowledge of the 'Ring. Formula One World Champion driver Nico Rosberg has also offered up his services for a potential 'Ring record attempt. The Porsche Taycan Turbo S sedan's time of 7:42 is the current record for production EVs at the Green Hell.

Musk said the Plaid option will cost more than Tesla's other offerings but will be priced lower than competitor offerings. Presumably he meant the Porsche Taycan Turbo which starts at $152,250 (launch pricing is increased to $154,660).

He also said Plaid will be available on the Model X and next-generation Roadster, but not the Model 3. In the Roadster, we could be looking at 0-60 mph times of under 2.0 seconds. Stay tuned as Tesla said it will release more information soon.