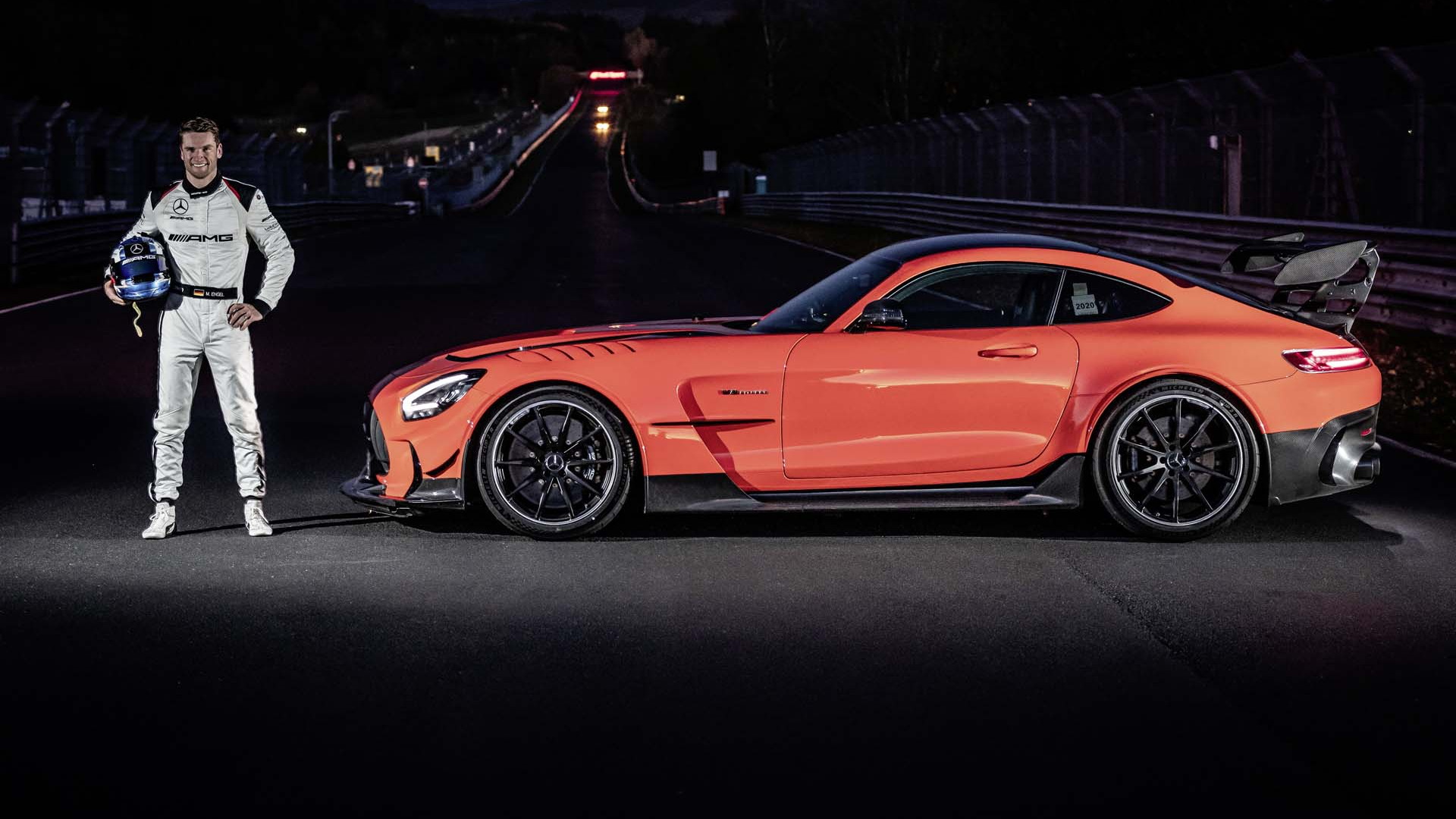 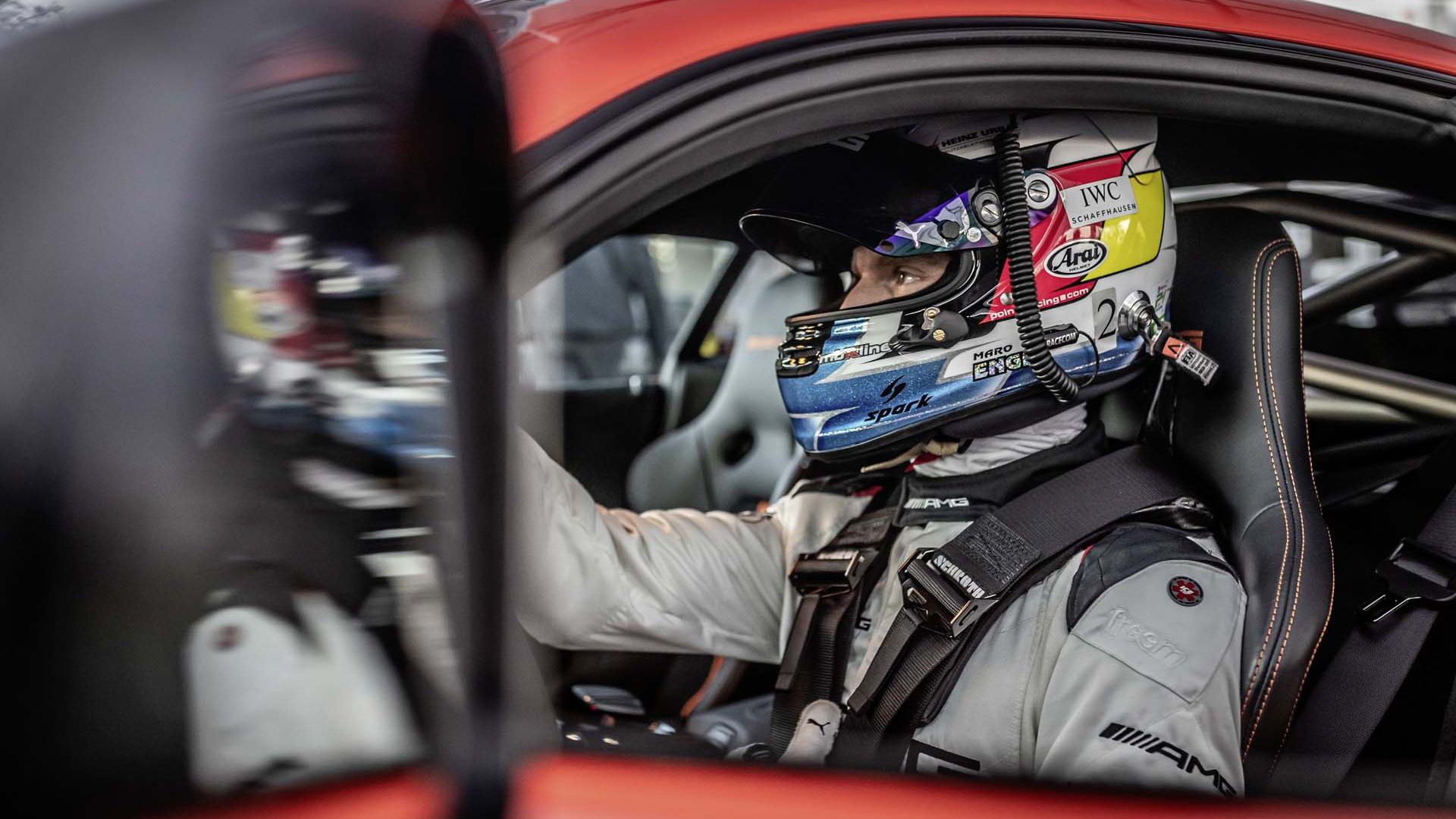 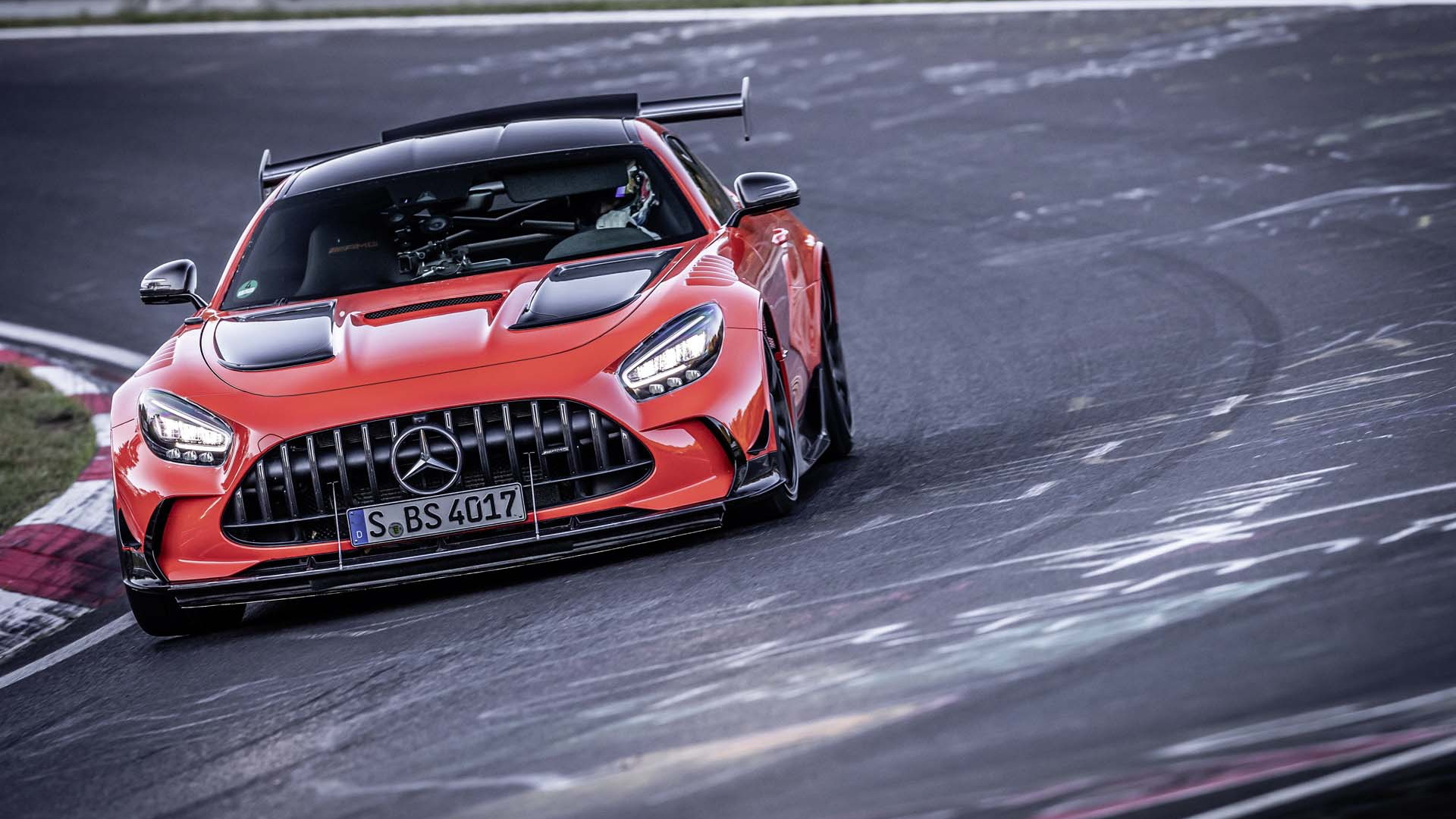 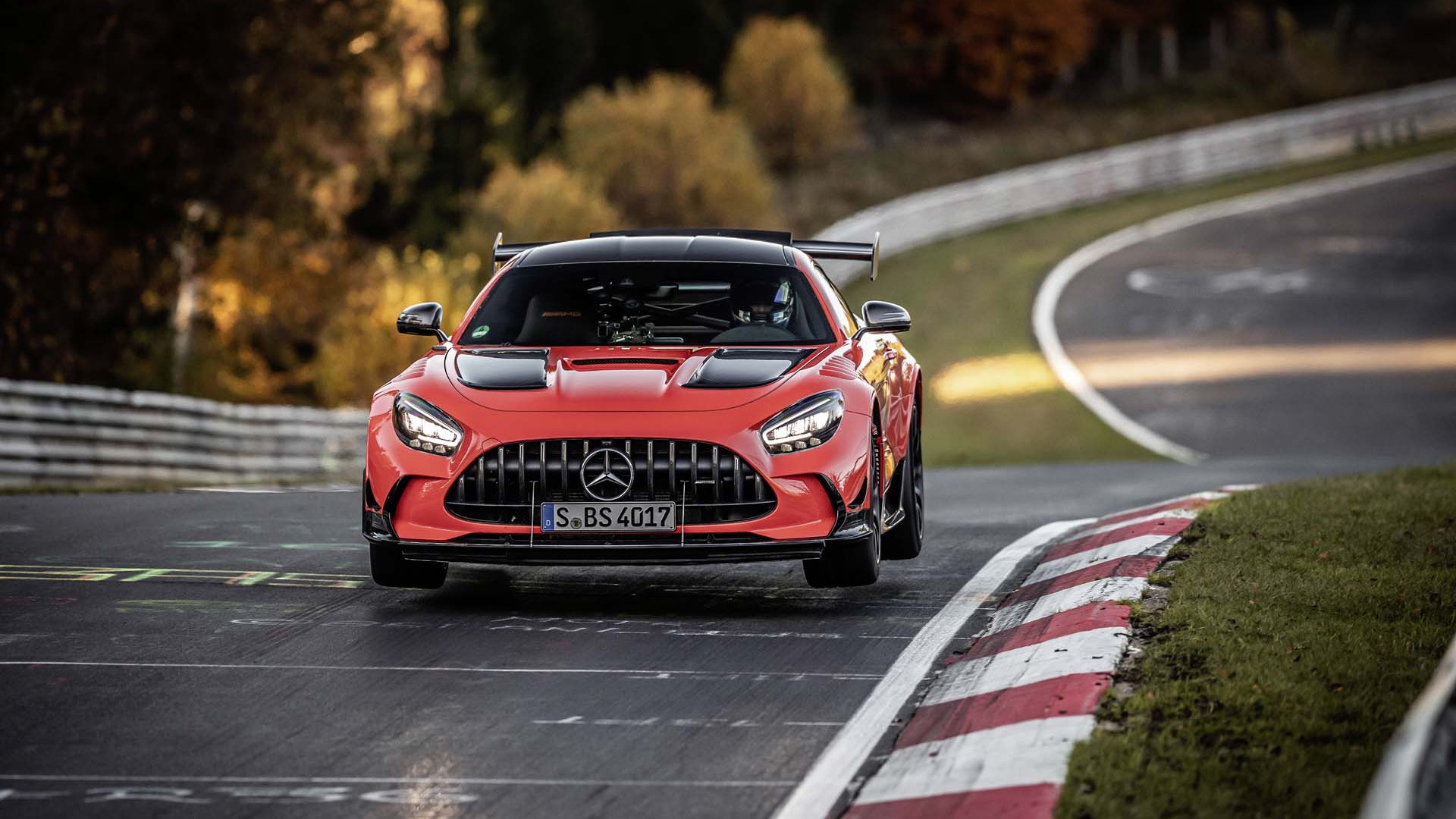 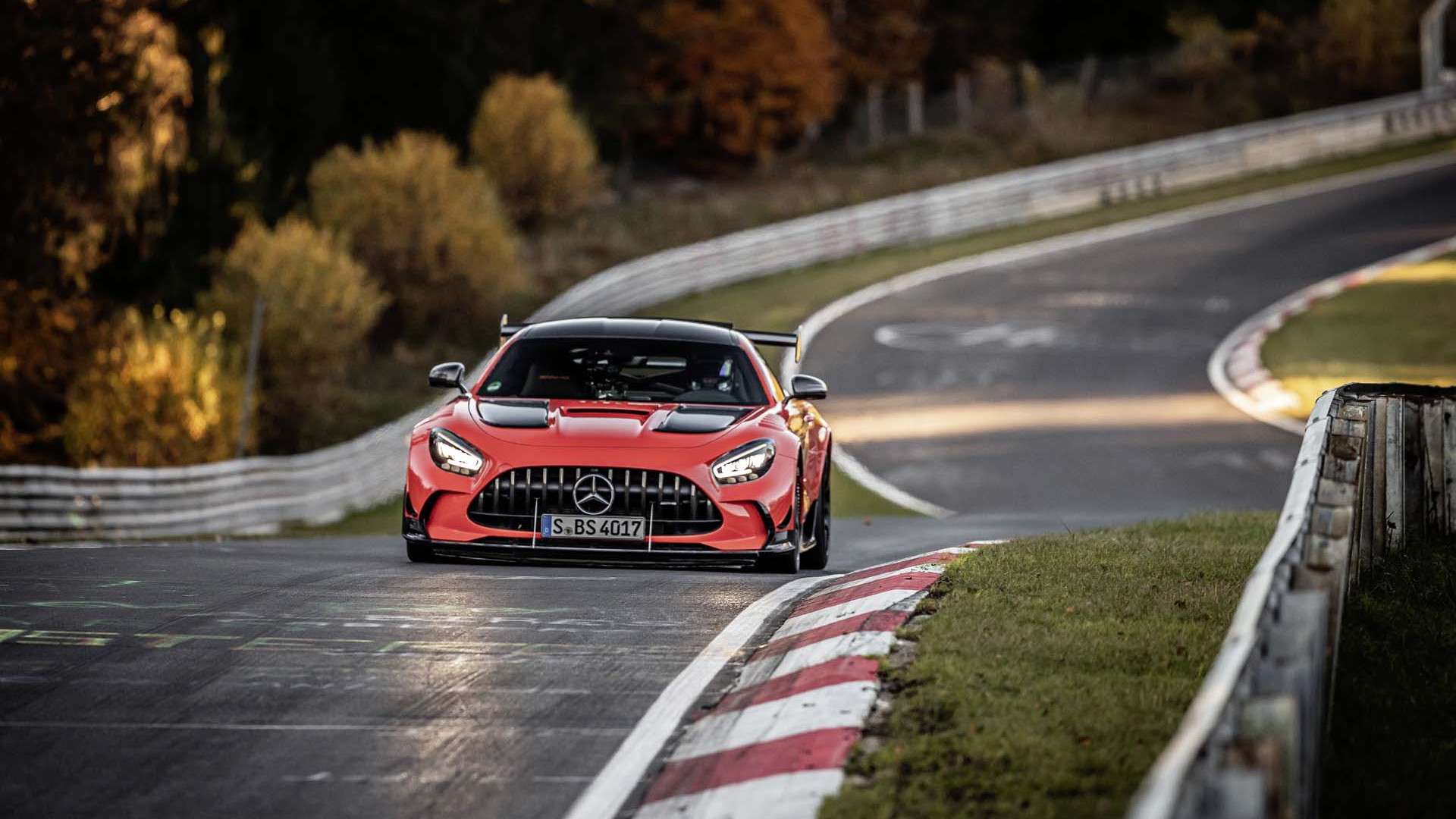 There's a new king of the Nürburgring and its name is the Mercedes-Benz AMG GT Black Series.

On Tuesday, the performance division of Mercedes-Benz announced the AMG GT Black Series set a new production-car lap record of 6:43.61. AMG stole the production-car crown from the Lamborghini Aventador SVJ, which lapped the 'Ring in 6:44.97 in 2018.

The record attempt took place on Nov. 4 at 5:02 pm. Conditions were not ideal with an outside temperature of 44.6 degrees Fahrenheit, an asphalt temperature of 50 degrees, a damp track, and dim light thanks to the setting sun.

GT3 driver Maro Engel was behind the wheel of the AMG GT Black Series for the record attempt on the Nürburgring Nordschliefe, which is 12.8 miles long. No stranger to the AMG GT, in 2018 Engel piloted the AMG GT R Pro around the 'Ring in 7:04.63.

Engel nearly hit 168 mph in the Kesselchen section of the track while going "well over" 186 mph on the Döttinger Höhe straight.

The record was achieved on the same day that AMG development engineer Demian Schaffert ran the updated 2021 Mercedes-Benz AMG GT 63 S 4-Door Coupe around the 'Ring in 7:27.8.

While the AMG GT Black Series is now king of the 'Ring for street-legal sports cars, it's not even close to the the overall king. In 2018 a street-legal modified Porsche 911 GT2 RS set a lap record of 6:40.3, but it's the Porsche 919 Evo that is the true king. The race car obliterated all Nürburgring records with a lap of 5:19.55 in 2018.

The Mercedes-Benz AMG GT Black Series was unveiled in 2020 as the range-topping version of the GT sports car. It's powered by a new version of AMG's 4.0-liter twin-turbo V-8 producing 720 horsepower and 590 pound-feet of torque. The automaker said it can sprint from 0 to 60 mph in 3.1 seconds, hit 124 mph in less than 9.0 seconds, and has a top speed of 202 mph.

A carbon-fiber torque tube and 7-speed dual-clutch transmission send power to the rear wheels. Those wheels are wrapped in Michelin Pilot Sport Cup 2 R MO tires, which were developed with the tire manufacturer for the Black Series. The stock Cup 2 "soft compound" tires were used during the record attempt as the car can't be modified to qualify for the production-car lap record.