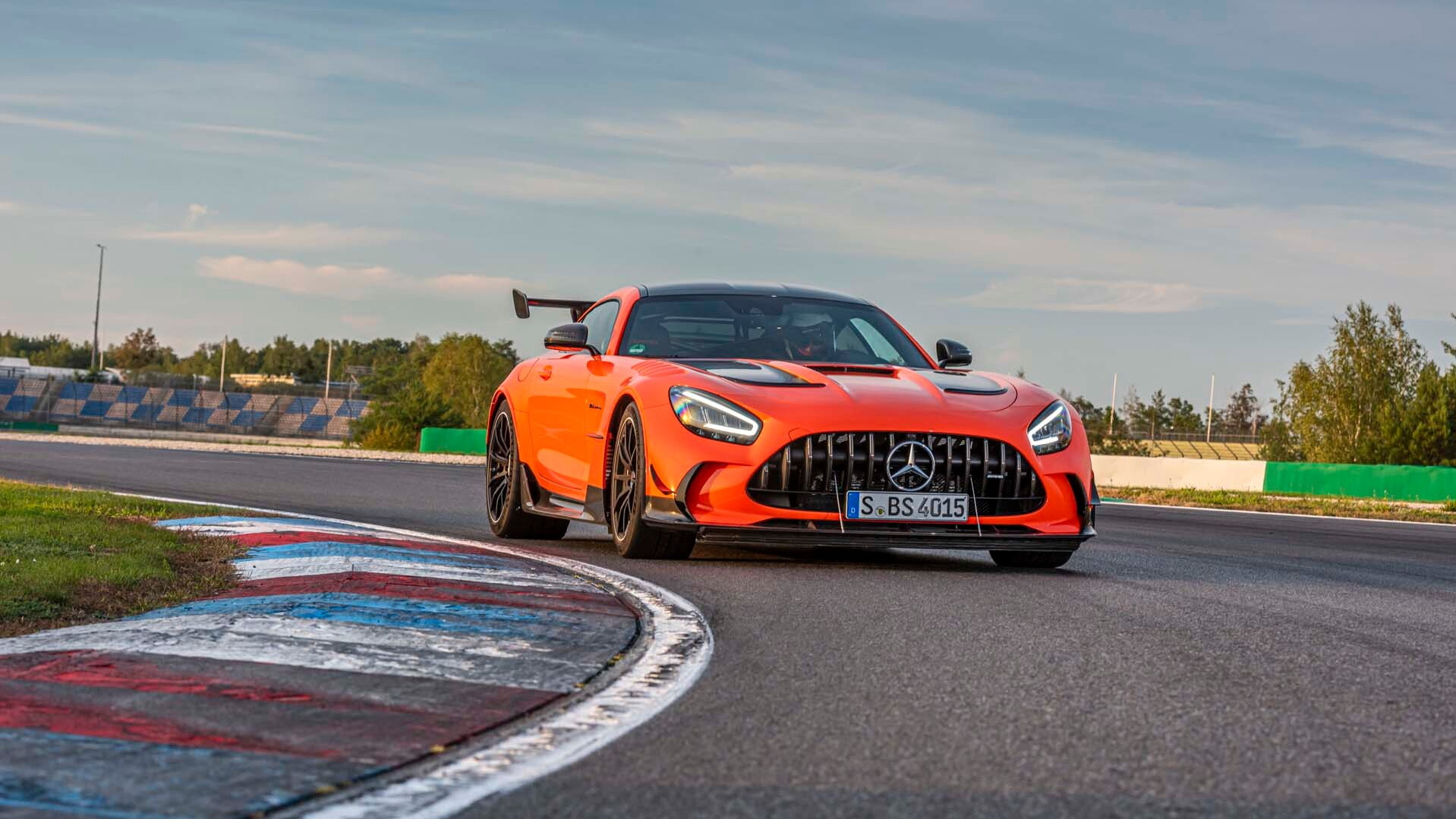 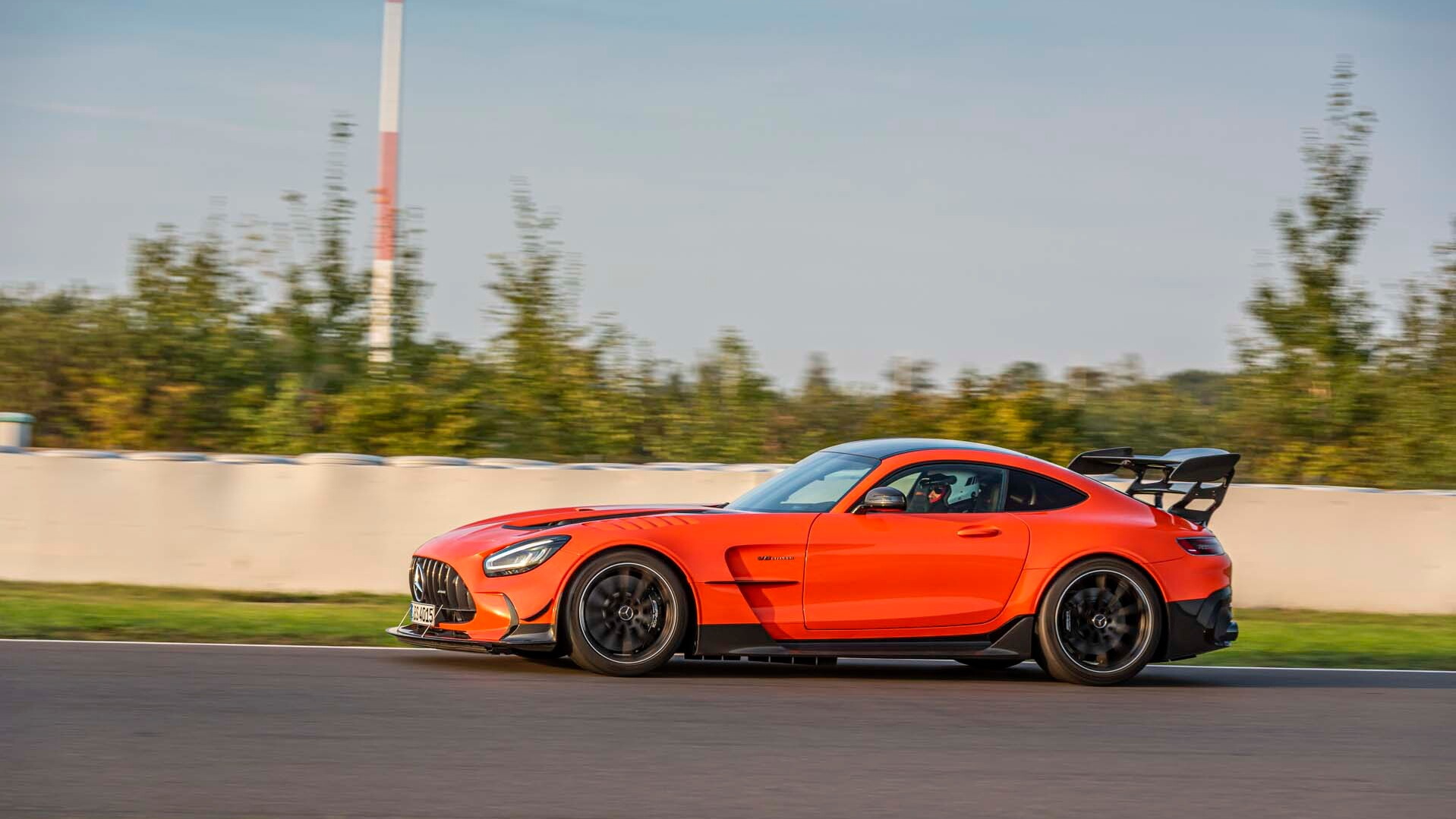 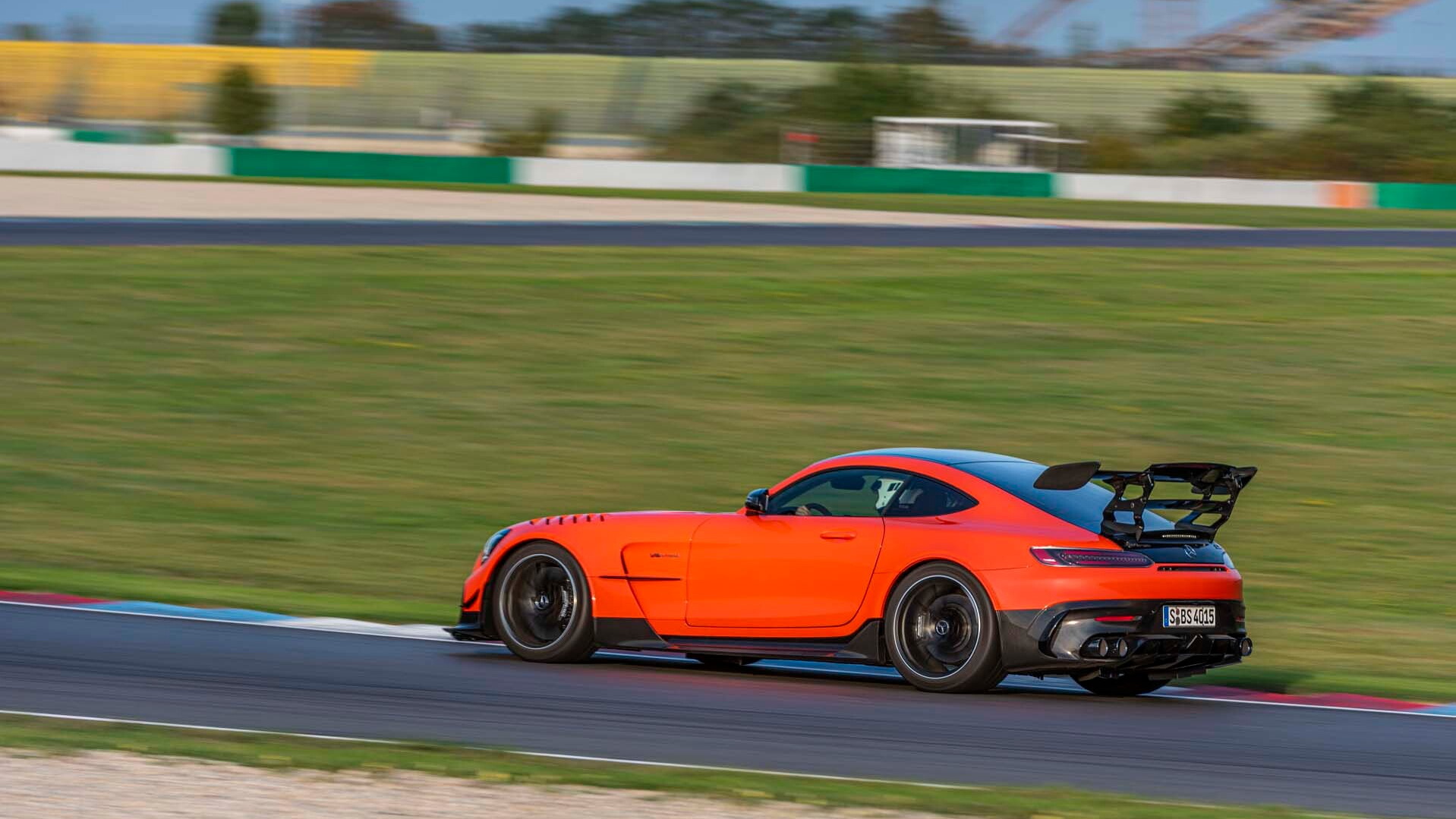 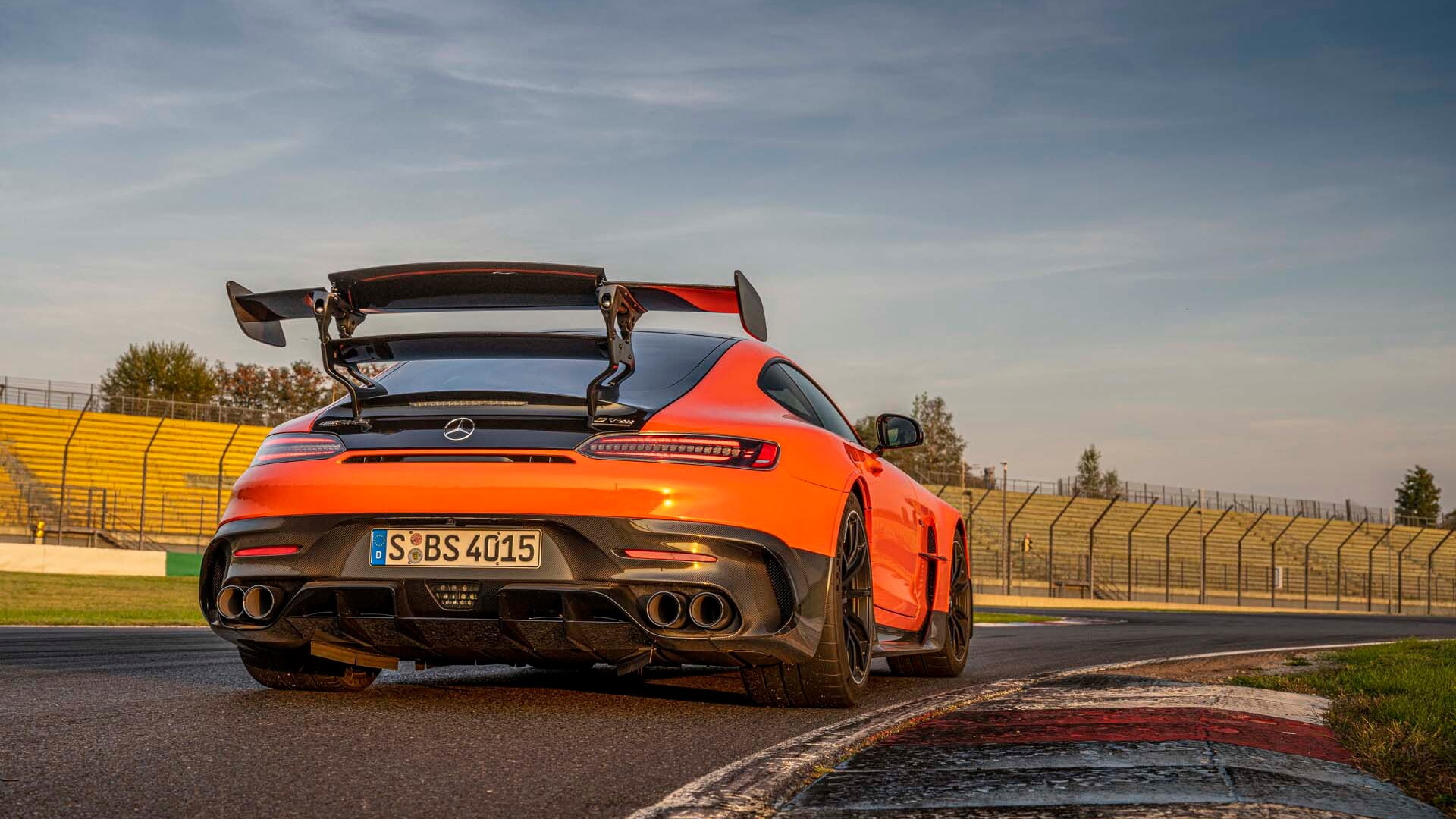 The Black Series name returns to the Mercedes-Benz AMG lineup for 2021, appearing on a new range-topping version of the GT sports car.

The new 2021 Mercedes-Benz AMG GT Black Series was unveiled in July, and it has since gone on to secure the lap record for production cars at the Nürburgring with a time of 6:43.61. That beats the previous best of 6:44.97 set by the Lamborghini Aventador SVJ in 2018—and the AMG did it with drive going to the rear wheels only.

Sales start in early 2021 and AMG on Tuesday announced that pricing starts at $326,050, including destination. That's quite the premium on the next rung down the ladder, last year's GT R Pro starting at $200,645, but the GT Black Series is on another level.

The star of the show is a new version of AMG's familiar 4.0-liter twin-turbocharged V-8. The engine boasts multiple upgrades including a flat-plane crankshaft, which helps improve torque low in the rev range and gives the GT Black Series an awesome soundtrack. Some of the exhaust piping has also been moved to between the cylinder banks, and the turbochargers' compressor wheels have been enlarged. Boost pressure is now up to 24.6 psi, compared to 19.6 in the GT R Pro. 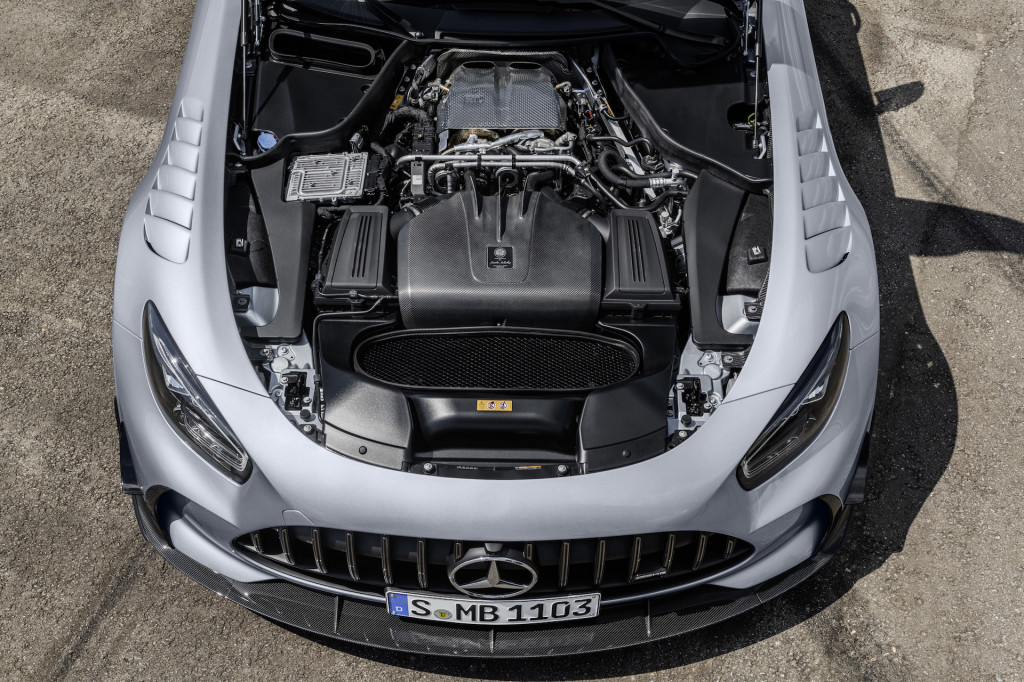 Power is sent to the rear wheels via a new carbon-fiber torque tube and an upgraded version of the GT's 7-speed dual-clutch transmission. The transmission has been tweaked to handle the extra grunt from the GT Black Series' engine, and to deliver quicker shifts. Its cooling has also been improved for long days at the track. 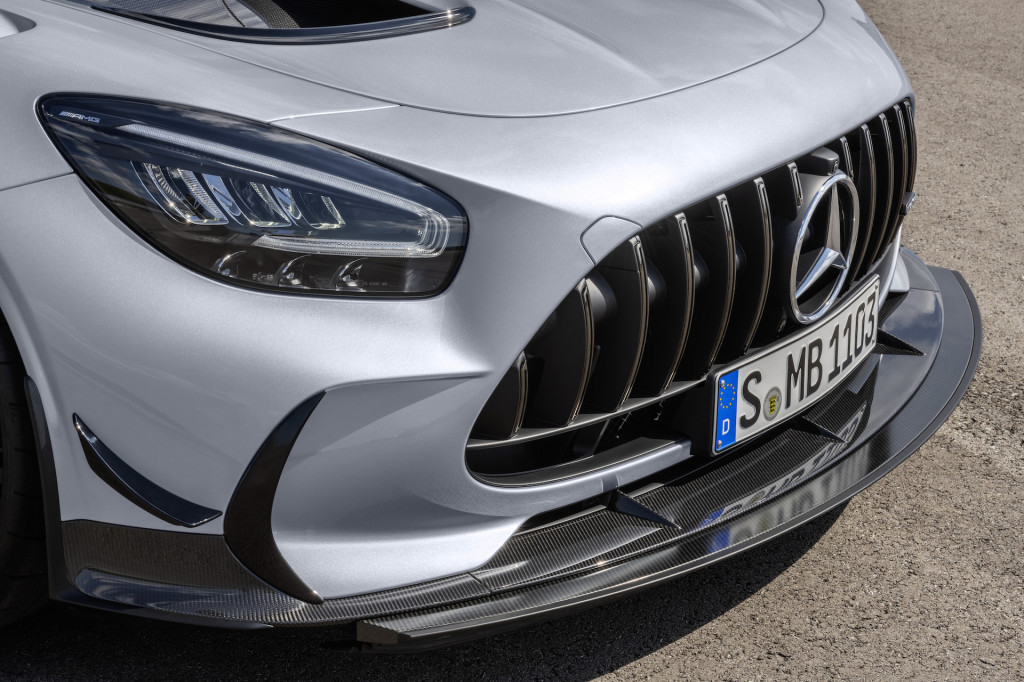 To help the GT Black Series stay glued to the track, the regular GT body has been almost completely redesigned with new aero elements. Up front, there's a large, manually adjustable splitter, along with dive planes to push air in an efficient—and intimidating—way. In back there's a tiered, two-stage wing to stick the muscular tail to the tarmac. A quad exhaust setup peeks out from an exceptional rear diffuser. If all of this sounds familiar, it's because a lot of it is pulled from the latest AMG GT3 race car.

One element that comes directly from motorsport is the new carbon-fiber hood whose large vents help keep the engine cool while also boosting downforce. The extracted air is then directed around the A-pillars and side windows to the rear, where it interacts with the rear spoiler. 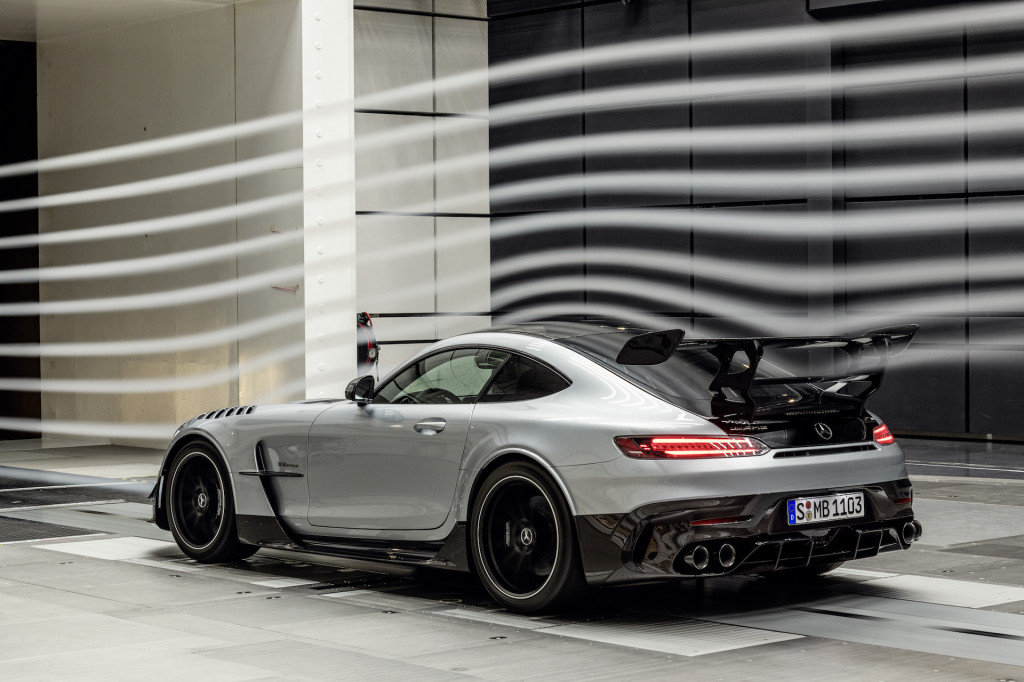 Naturally, the suspension also plays a major role on the track. Modifications to the suspension include a widened track front and rear, new coil-overs with adjustable damping, increased camber (manually adjustable) and toe-in stability, and motorsport-inspired spherical bearings on the lower wishbones instead of traditional bushings. A carbon-fiber sway bar was also added at the front axle, while a carbon-fiber shear panel was added to the rear underbody to improve rigidity.

The wheels are forged units measuring 19 inches up front and 20 inches at the rear, and they come wrapped in Michelin Pilot Sport Cup 2 R tires measuring 285/35 up front and a meaty 335/30 at the rear. A special “hard compound” version of this tire is also available for track days where ambient temperatures are on the warm side. Carbon-ceramic brakes are standard and the car's curb weight is 3,616 pounds. 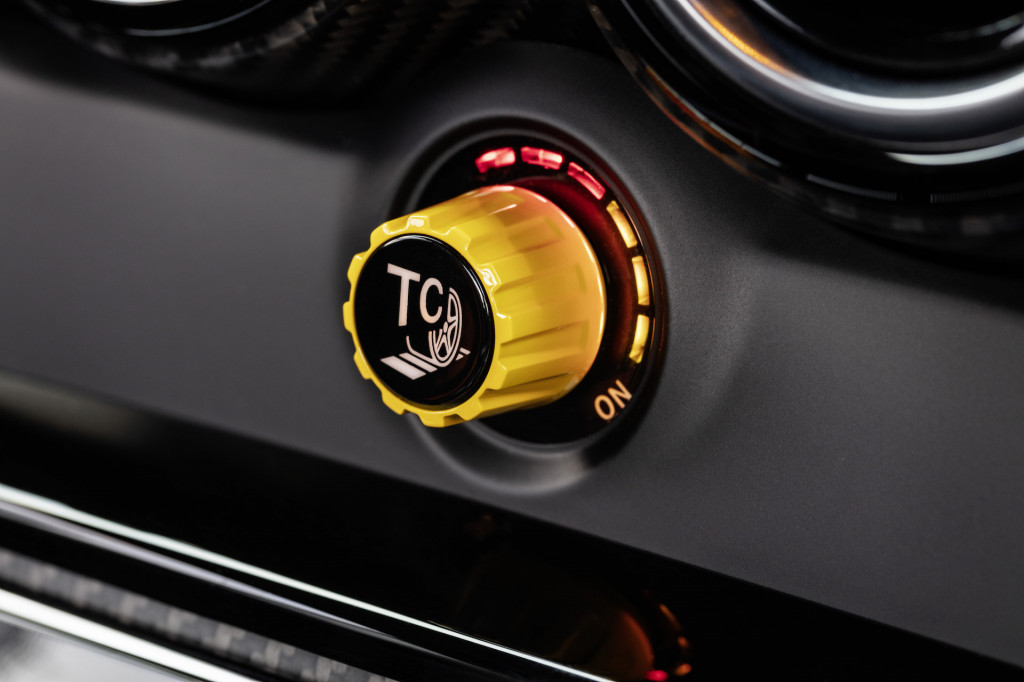 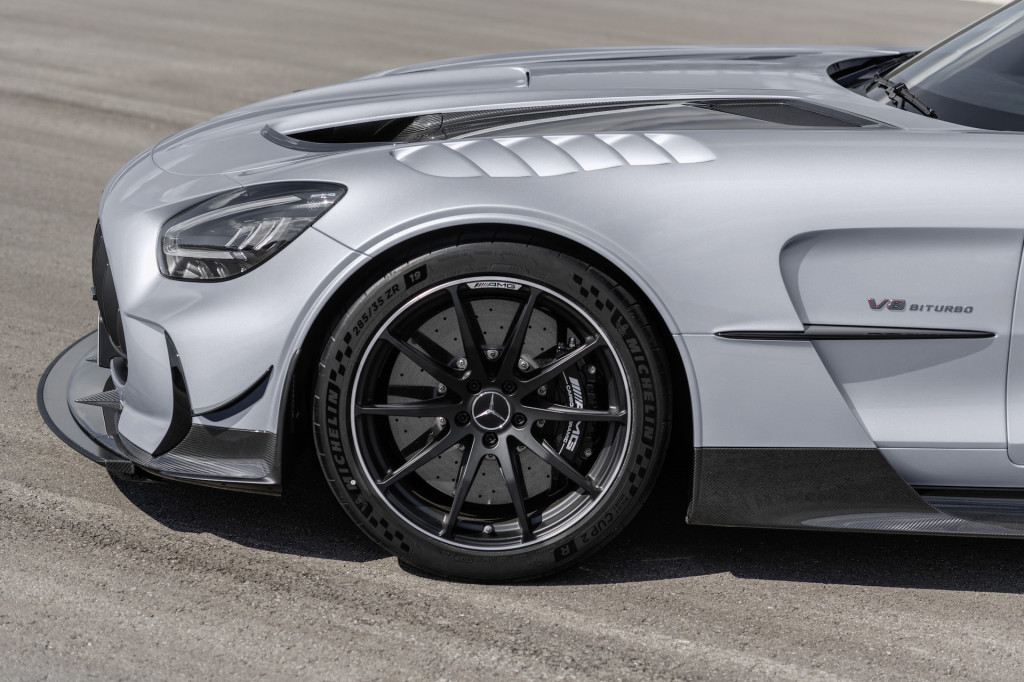 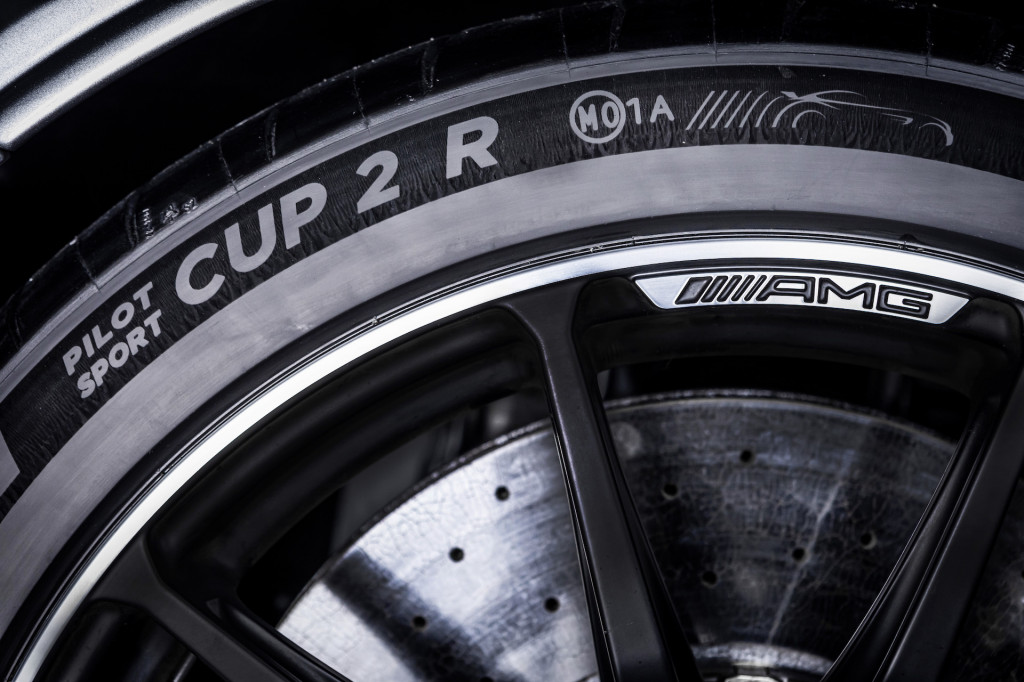 The AMG engineers have also installed a new traction control system with nine levels of adjustment (Level 1 for wet conditions and Level 9 for maximum sideways action). Operated via a control on the center console, the traction control system adjusts the level of slip possible by controlling power to the wheels using the engine mapping, just like in the GT race car. It means there isn't actually any intervention from the stability control system.

Also worth a mention is the Sport Plus mode of the drive mode selector. In the GT Black Series, this has been tailored for specific track surfaces in that it can adjust the level of suspension damping to suit the varying smoothness of different racetracks. Profiles for some popular tracks are programmed in. 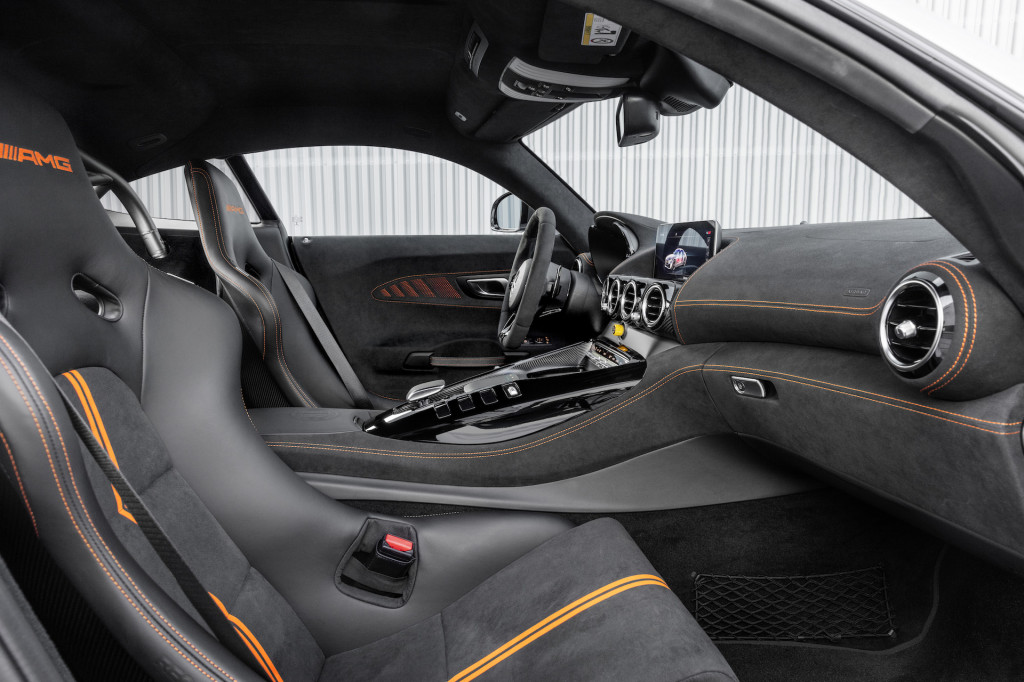 At this price range, there are few options left to add. Some options left to the buyer include a model-exclusive orange paint finish known as AMG Magmabeam, as well as matching contrast stitching in the cabin.

AMG typically launches the Black Series as a model's final variant, meaning the current GT is likely on its way out soon. A successor is planned and may have already been teased. All we know about the next GT is that it will be based on a new modular sports car platform to be shared with the next Mercedes-Benz SL-Class. The platform is expected to bring weight savings and likely some form of electrification.