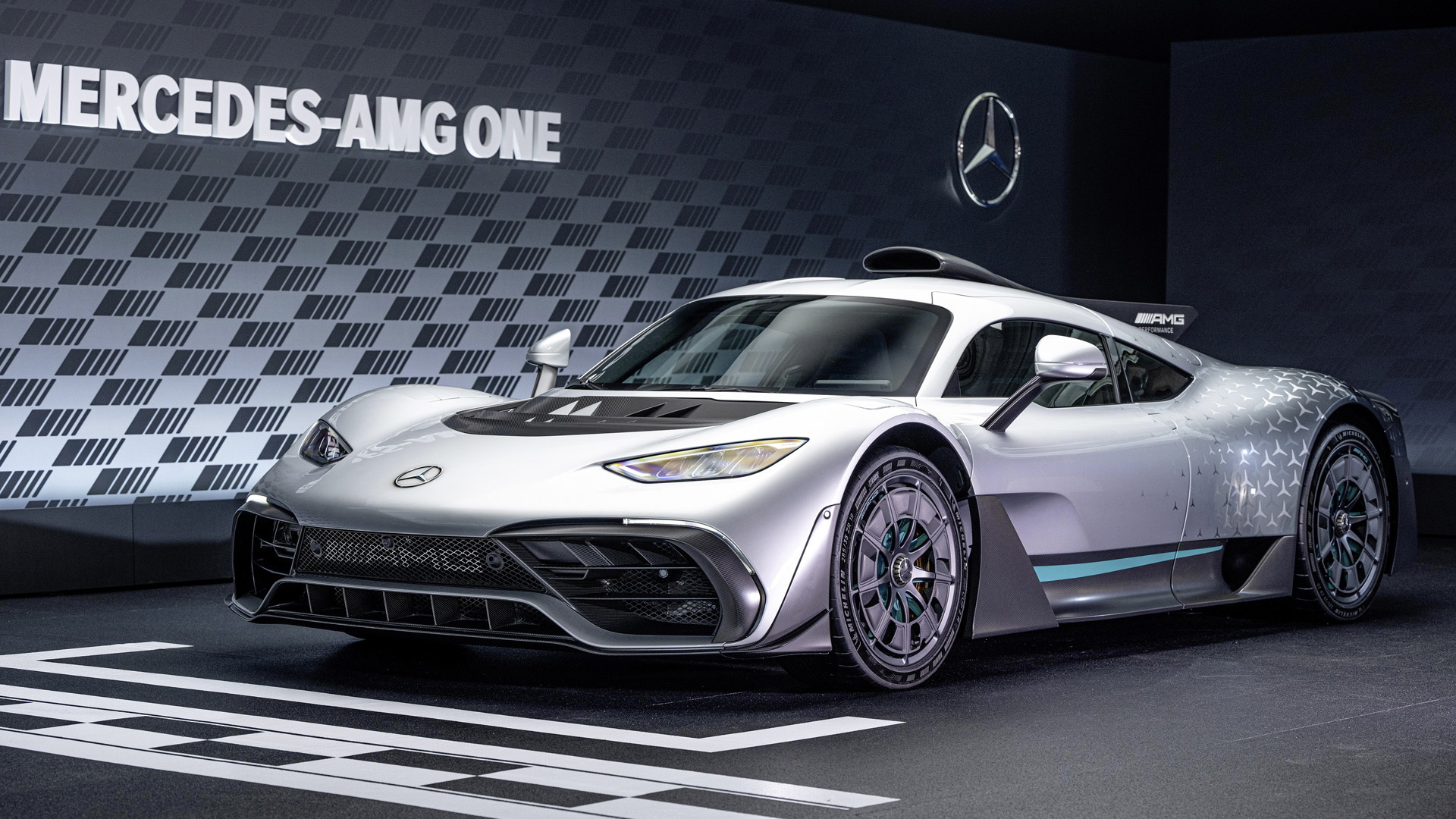 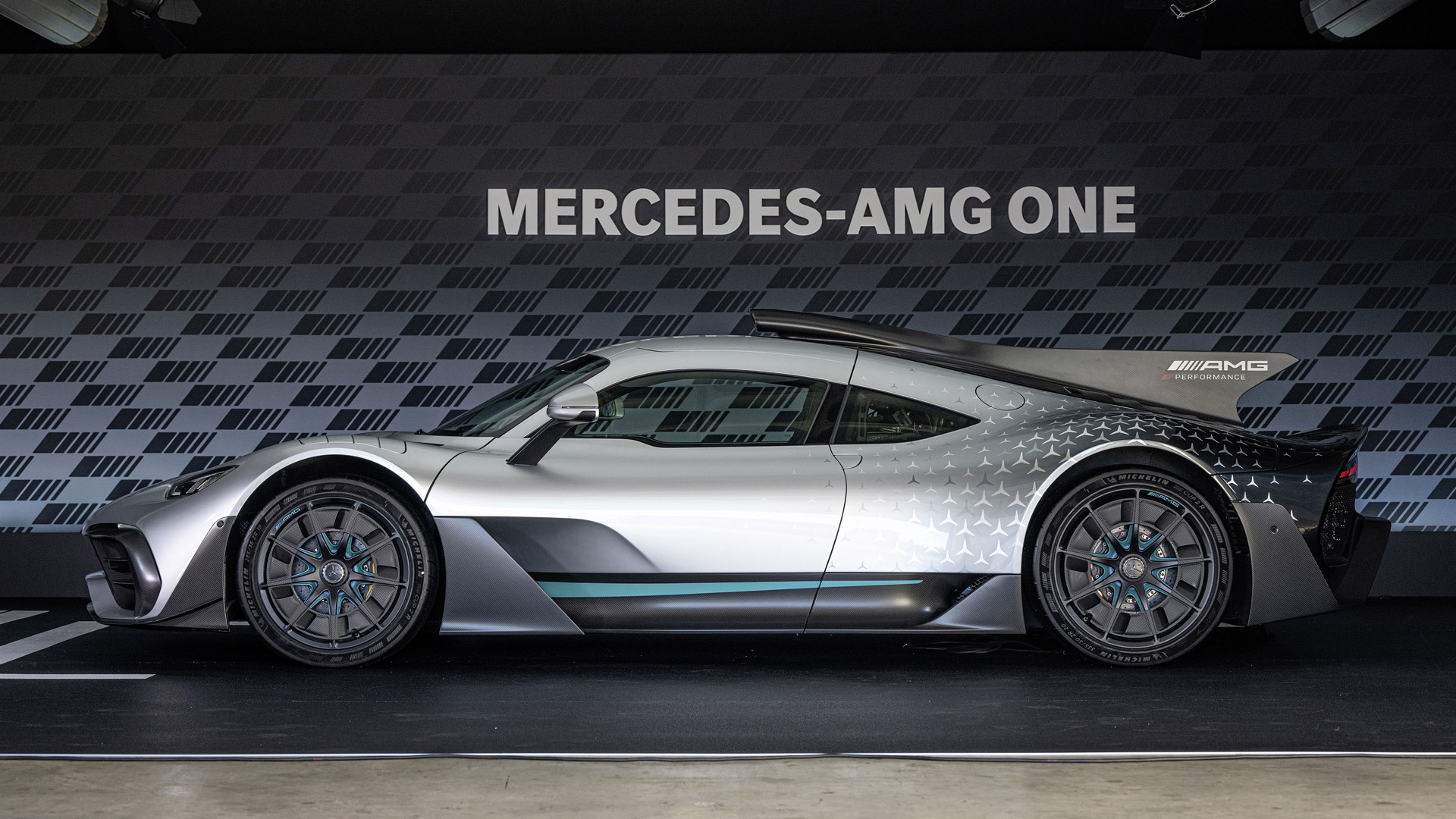 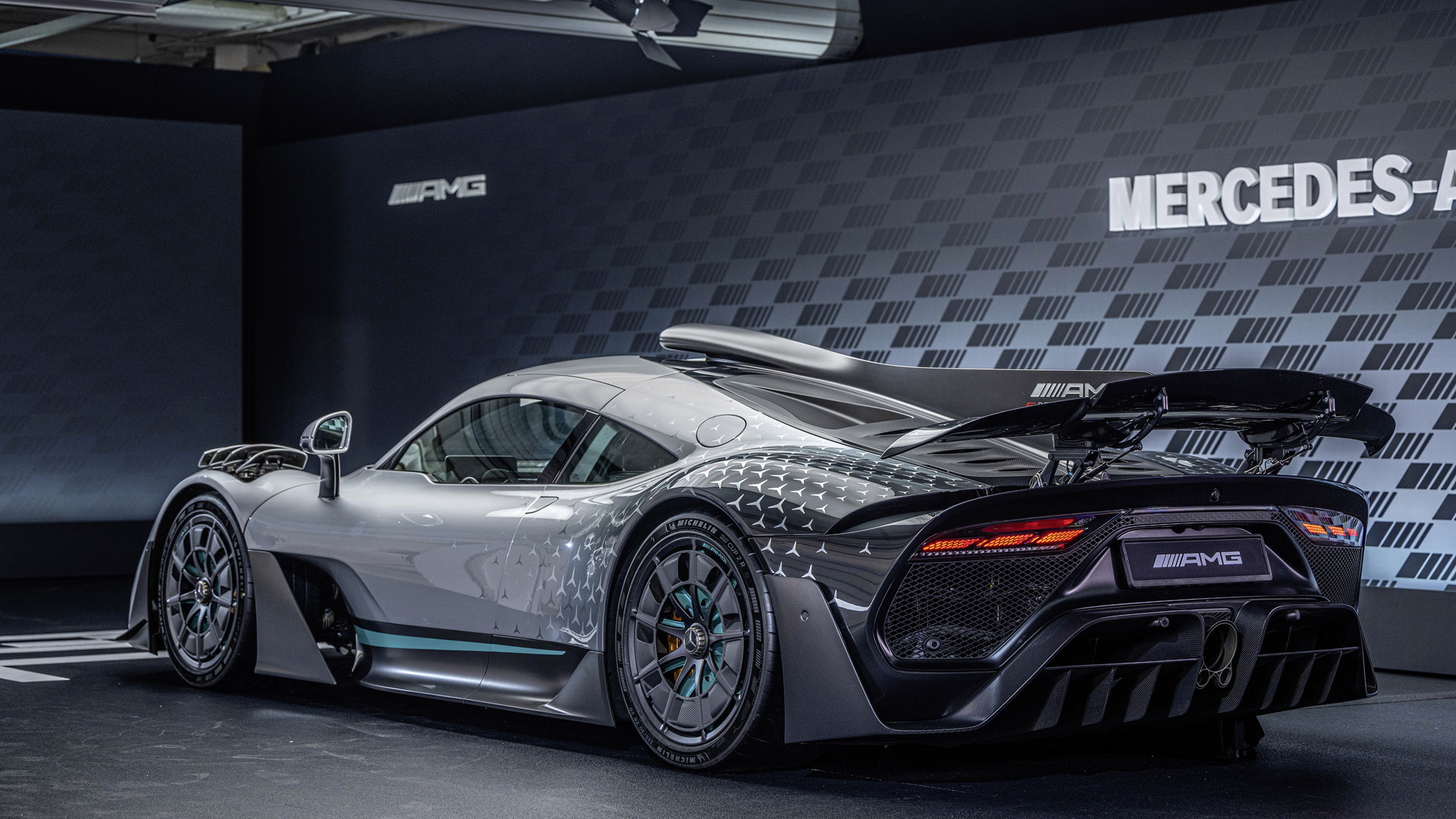 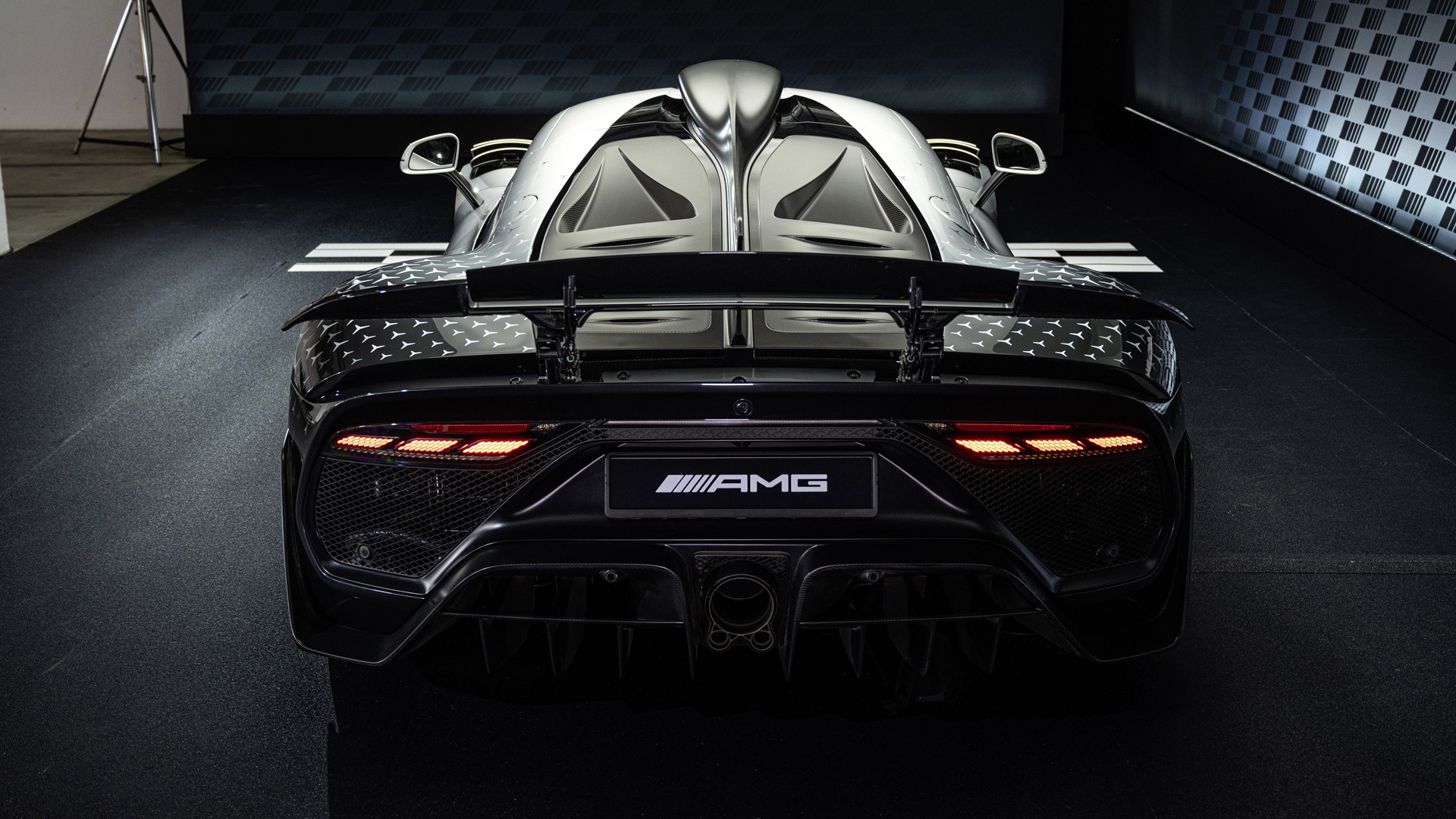 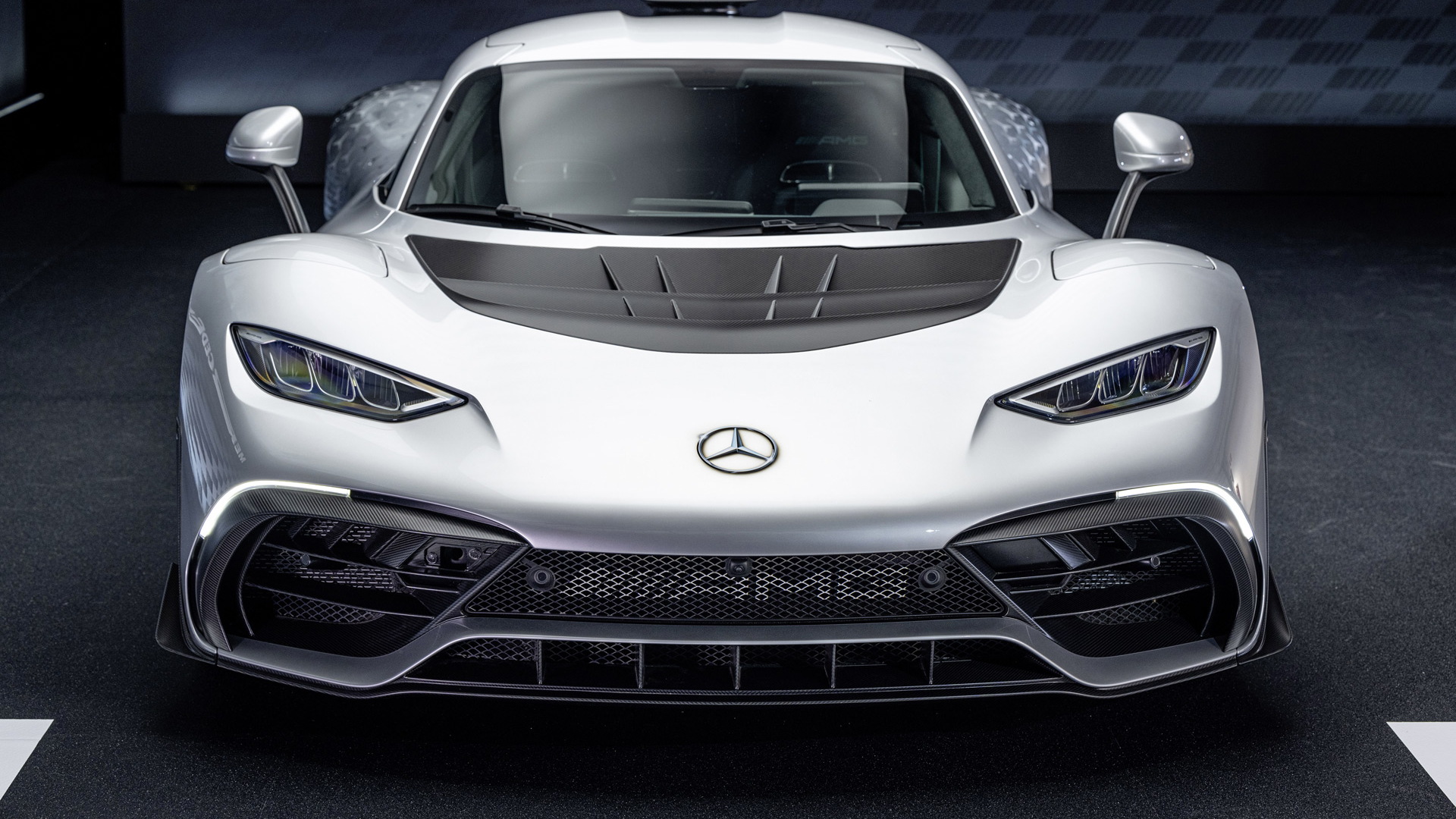 It's been a long road but Mercedes-Benz AMG's One hypercar is finally here in production form and the lucky buyers awarded a build slot can look forward to the start of deliveries later this year.

First revealed in concept form at the 2017 Frankfurt International Motor Show, the One is a celebration of the Mercedes Formula 1 team's string of successes in the top echelon of motorsports over the past decade and is powered by the same engine used in multiple championship-winning F1 cars (specifically the unit from the 2015 season).

The mid-mounted engine is a 1.6-liter turbocharged V-6 complete with an 11,000-rpm redline and turbo-mounted electric motor-generator. Three additional electric motor-generators feature in the One, with one mounted between the engine and a 7-speed automated manual transmission, and a further two at the front axle to form an all-wheel-drive system. Combined output of the system is 1,049 hp, with the engine on its own delivering a maximum 566 hp.

The batteries, mounted at the front to aid weight distribution and featuring a complex cooling system, are also of the same technology used in F1, though they have much more capacity in the One, a total 8.4 kilowatt-hours. This enables a pure electric range of around 11 miles on a charge. The One is actually a plug-in hybrid, with charging possible via an onboard 3.7-kilowatt charger. The front motor-generators can also recover energy. Once again, F1 technology has been used, enabling up to 80% of brake energy under everyday driving conditions to be recovered.

One of the biggest issues with getting the One to production (it was originally due in 2019) was meeting Europe's tough new EU6 emissions standards with an engine never intended to power a road car. According to AMG, an exhaust gas cleaning system with four preheated metal catalytic converters, two ceramic catalytic converters and two particulate filters was required. The system is also backpressure optimized to avoid power losses. All of this technology naturally adds weight. The One's curb weight is 3,737 pounds, or close to the weight of a Ford Mustang GT.

Beyond the special powertrain, the One benefits from high levels of downforce. The active aerodynamics, which underwent wind tunnel testing with help from F1 engineers, features a multi-part, two-stage extendable rear wing for maximum downforce in race mode. We hear as much as 1,500 pounds. There's also a Drag Reduction System, just like in F1. Here a flap attached to the rear wing, as well as the car's active louvres, are closed. Although this reduces downforce by around 20%, it enables a higher top speed. The DRS is automatically deactivated as soon as the driver breaks or sufficiently eases off the accelerator.

Also borrowed from the world of F1 is the One's push-rod suspension design and lightweight carbon-fiber construction. For the suspension, five-link designs are used front and rear. The adjustable coil-over suspension has several special features: both push-rod spring struts have been installed across the direction of travel to maintain a low height. The innovative arrangement of the spring/damper unit also replaces the function and application of conventional tubular cross members.

The forged aluminum wheels consist of 19-inch front and 20-inch rear pairs, shod with 285/35- and 335/30-size Michelin Pilot Sport Cup 2 R tires, respectively. The tires were developed specifically for the One and even feature a silhouette of the car in the side wall. The brake setup features carbon-ceramic rotors at all corners, with 6-piston calipers up front and 4-piston in the rear.

Unlike the rival Aston Martin Valkyrie hypercar, the One's interior has the comfort and usability approaching that of a conventional car. It's still extreme, though, with carbon fiber used for many of the parts and the non-adjustable seats being mounted directly to the floor of the car's monocoque structure (the pedal box can be adjusted to suit different drivers). This results in a low seating position with the driver's feet being above their hips, just like in an F1 car. Also borrowed from F1 is the square-shaped steering wheel and the design of the controls.

A pair of floating screens serve as the instrument cluster and infotainment hub. A digital rearview mirror connected to a rear-facing camera is also present. Other creature comforts include climate control, power windows, and a central storage area with USB-C ports.

There are six driving modes: Race Safe, Race, EV, Individual, Race Plus and Strat 2. Race Plus and Strat 2 are intended for track use (chassis lowers 37 millimeters at the front and 30 at the rear), with Strat 2 the most extreme mode. The name is derived from the Strategy 2 setting of AMG's F1 cars using during race qualifying, where the electric motors deliver their maximum power. The driver can also choose between Comfort and Sport settings in some of the modes, and the traction control system also has nine settings to choose from. Note, the car always starts in EV mode. This is to give time for the catalytic converters to become preheated, at which point the V-6 can be first started.

As mentioned above, the one features a 7-speed automated manual transmission. This is a newly developed transmission specifically designed to handle the car's high revs and torque output. The transmission, which also integrates a locking differential, is bolted directly to the chassis for extra rigidity. It features hydraulically controlled shift roads and a 4-disc carbon-fiber clutch, and its gear ratios were selected to minimize the power difference after upshifting and keep the engine running at high revs.

The One will make its formal debut later in June at the 2022 Goodwood Festival of Speed in the U.K. Just 275 examples are destined to be built, and all build slots are long gone. The price for one is 2.275 million euros (approximately $2.44 million).