Mercedes-Benz is overhauling its naming strategy in preparation for a flood of new models due to be released in the coming years. The changes aren’t as dramatic as those made recently by Infiniti and Cadillac, with many model names remaining unaffected, and they're only gradually being phased in as vehicles are either updated or completely redesigned.

The changes, arguably the most significant since 1993 when Mercedes made the letters ‘C’ and ‘E’ prefixes on the badges of its small and midsize sedans, will help alleviate confusion as the German automaker introduces 11 all-new models over the next seven years. On top of this there will be new powertrain systems to deal with, but we’ll get to that a bit later.

There are some exceptions, however. The G-Class SUV and SL-Class roadster will keep their names due to their iconic status. The '4Matic' tag signifying an all-wheel-drive vehicle also remains unchanged. 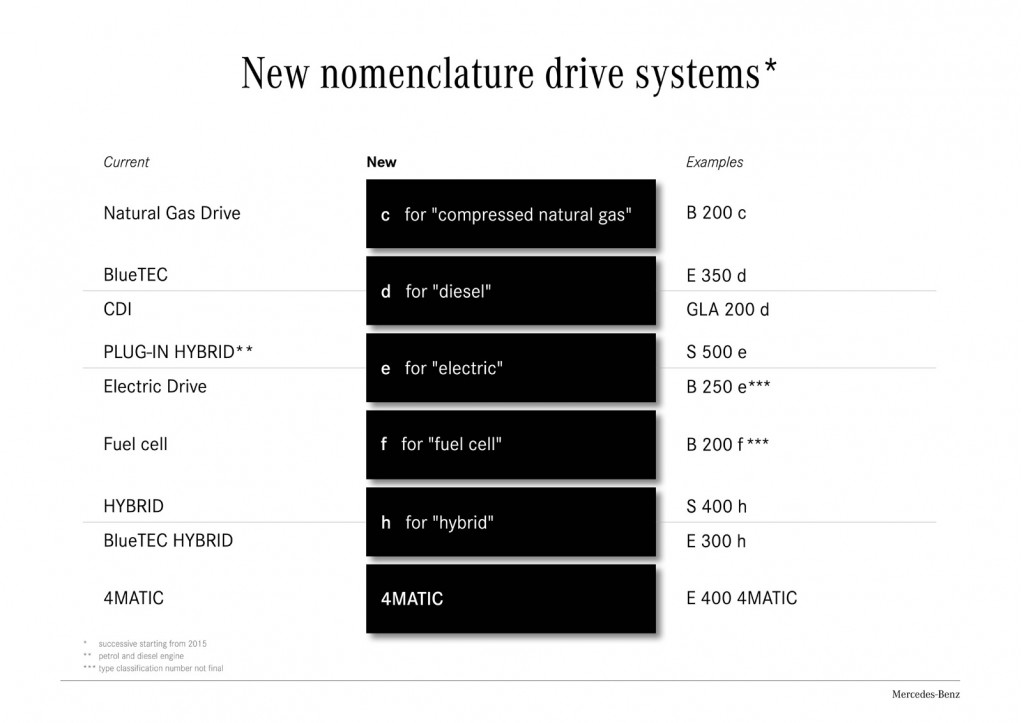 As for the powertrains, the naming of these will also be simplified. New lower-case letters will describe powertrains: ‘c’ for natural gas (compressed gas); ‘d’ for diesel; ‘e’ for electric; ‘f’ for fuel cell; and ‘h’ for hybrid. Numerical suffixes that have referred less directly to engine size over the years will be kept, and will continue to correspond, generally, to relative size and power.

For example, the diesel-powered ML350 BlueTEC will become a GLE350d, while the E400 Hybrid will become a E400h. Interestingly, the B-Class Electric Drive becomes a B250e, reflecting that the performance of the battery-powered vehicle would be similar to that of a theoretical B250 gasoline model or B250d diesel model.

Mercedes says the new model names will start appearing next year, when updated versions of the M-Class and GL-Class are introduced as well as a redesigned GLK-Class. Under the new naming strategy, these will be the GLE, GLS and GLC respectively.

But what about the 11 all-new models. Mercedes says they will have no precursor in the current lineup, meaning the automaker is about to enter some new segments. New models that we know are coming include the Mercedes-AMG GT, Mercedes-Maybach S-Class, S-Class Pullman, S-Class Cabriolet, CLA Shooting Brake, C-Class Cabriolet and a GLE Coupe (essentially Mercedes’ rival to the BMW X6).

That leaves four unknowns. Some possibilities are a Mercedes-Maybach GLS, a GLC Coupe (a BMW X4 rival) and perhaps a production version of the recent G-Code concept.