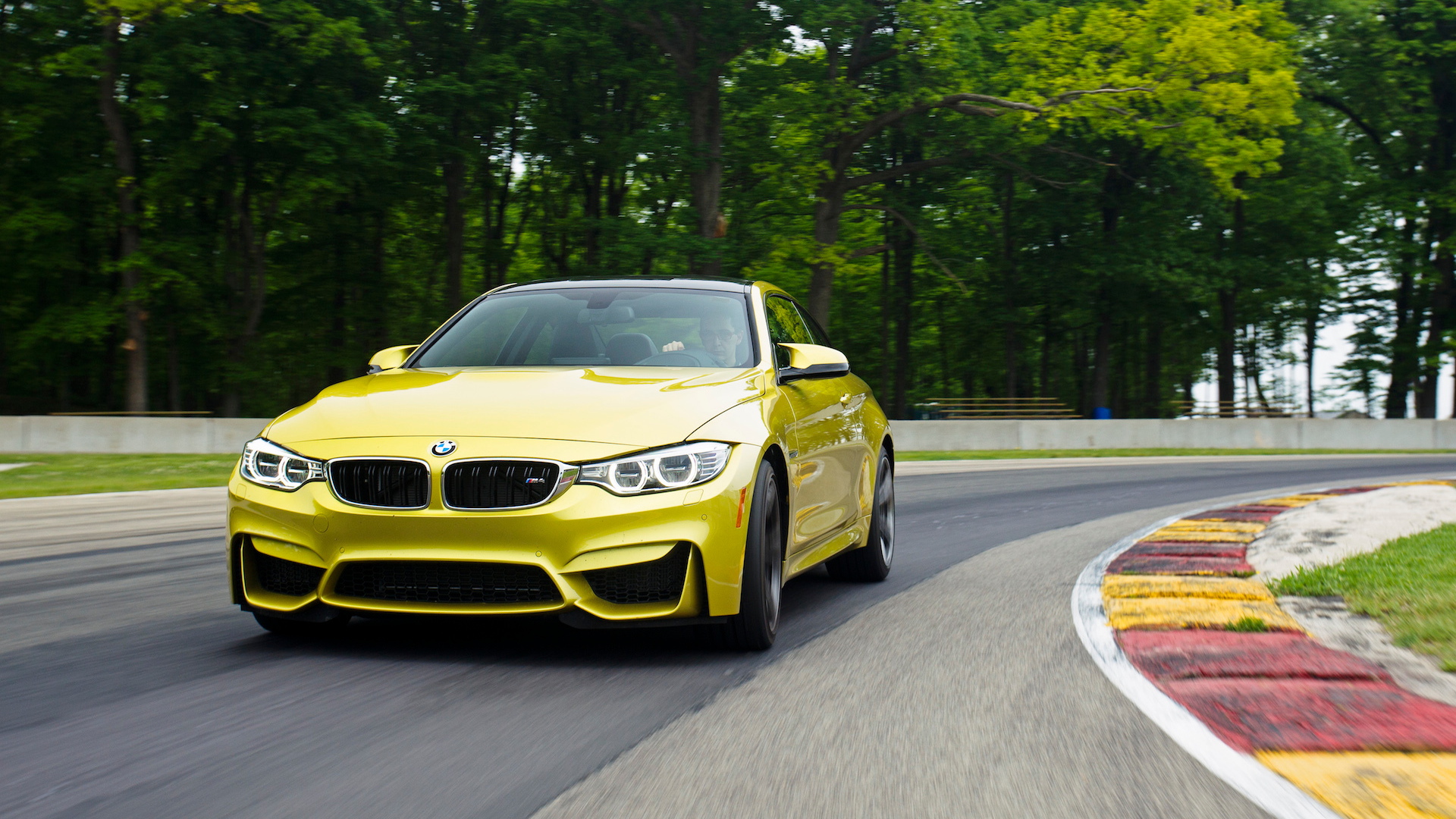 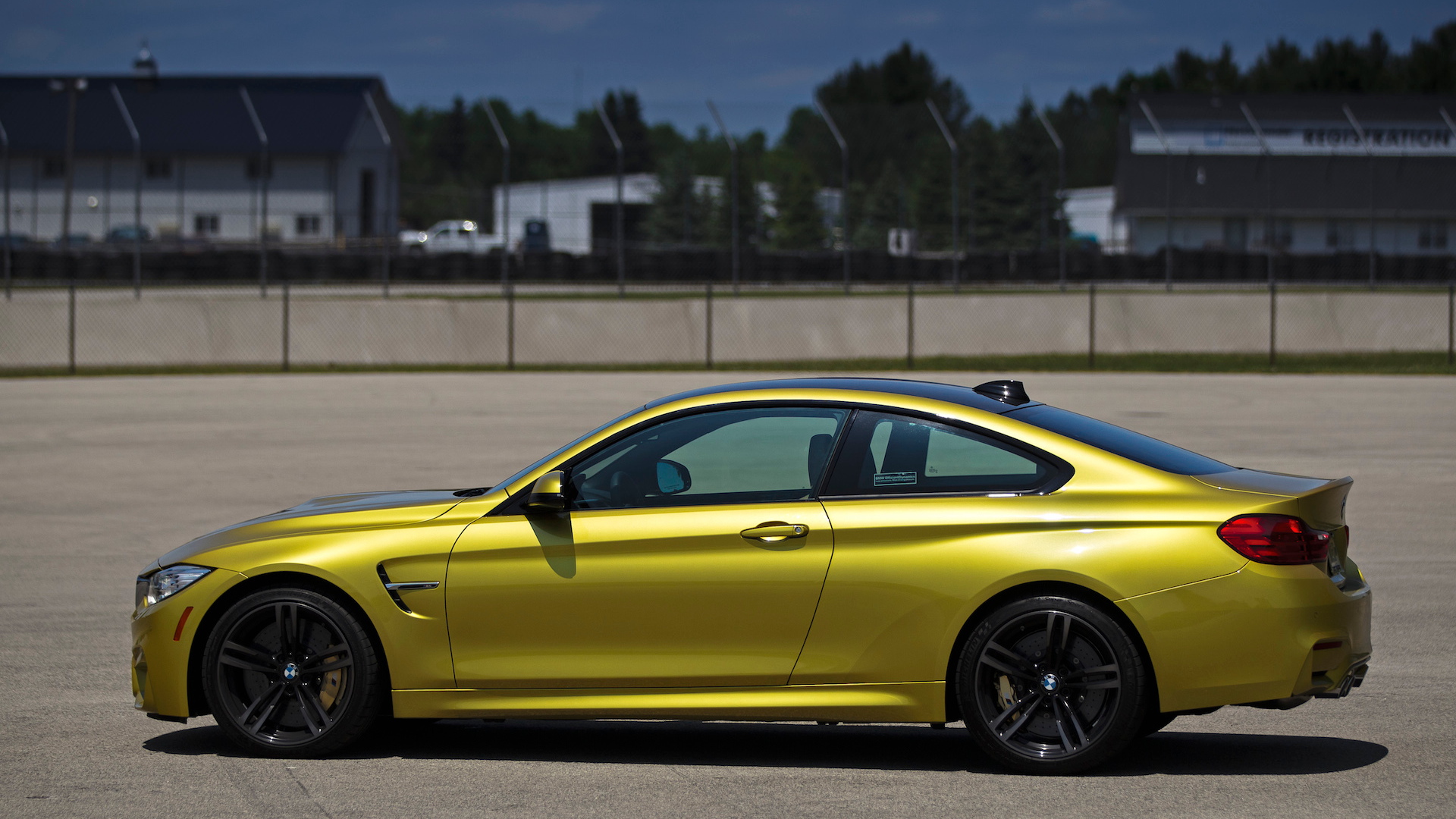 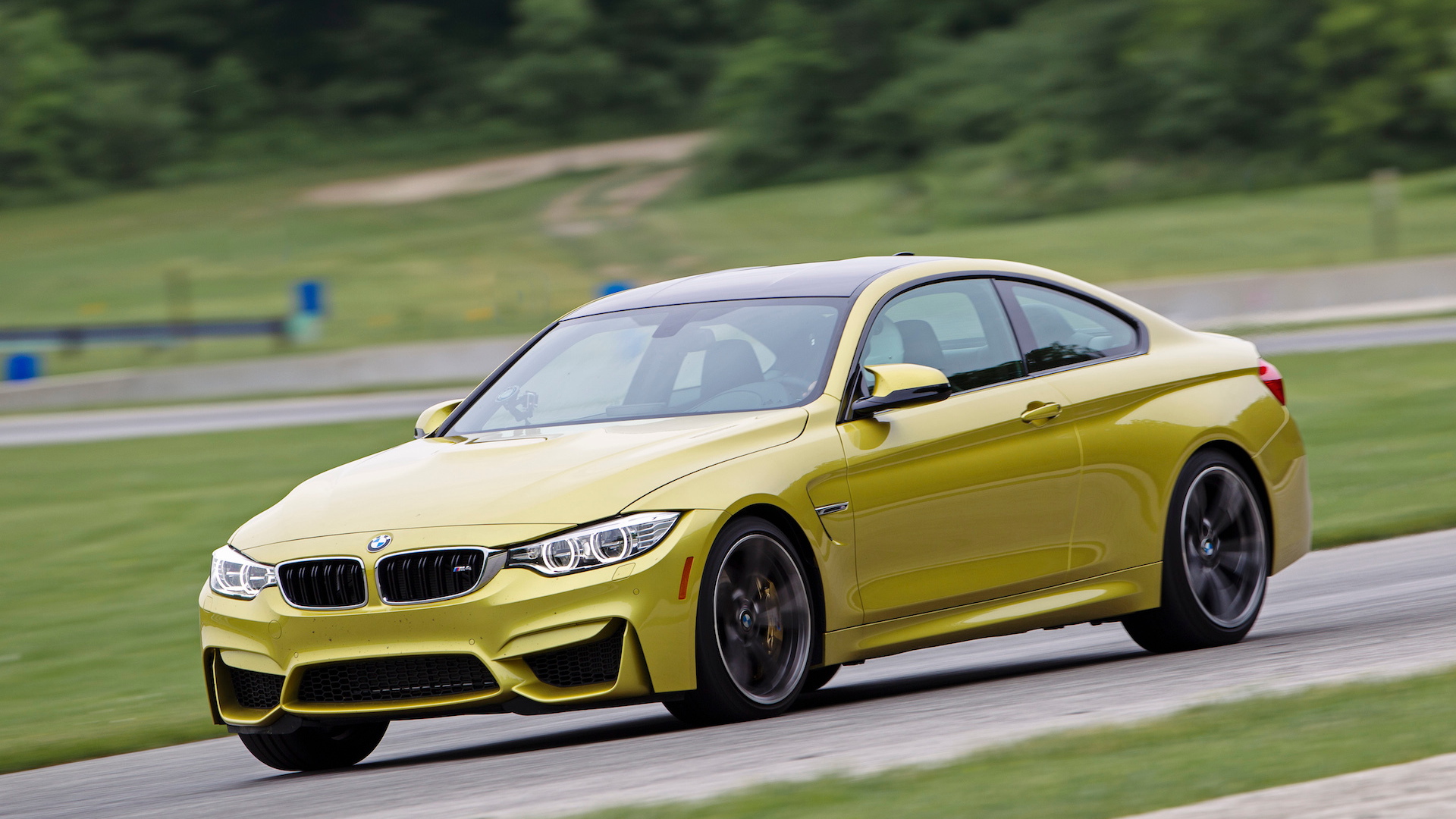 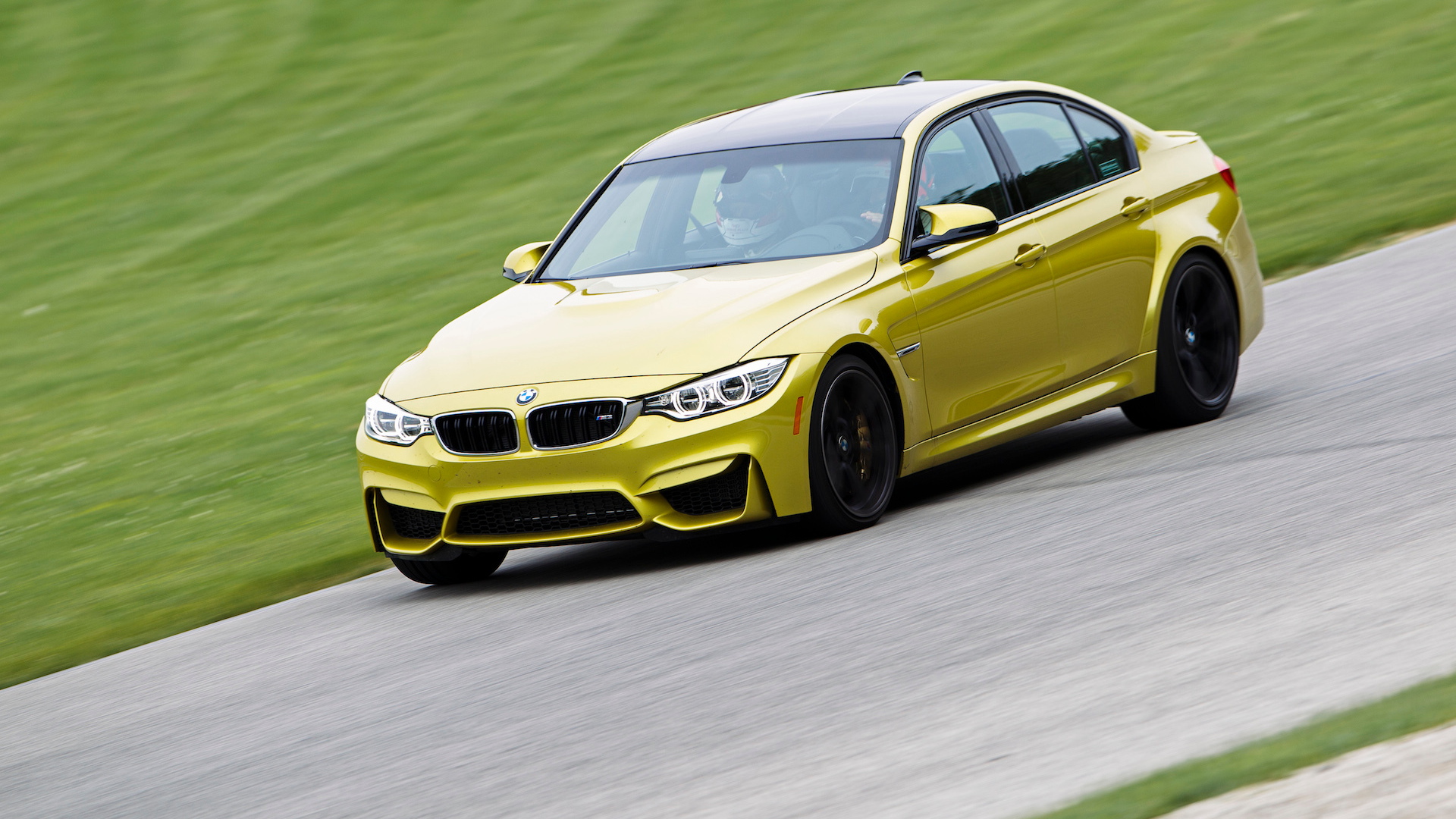 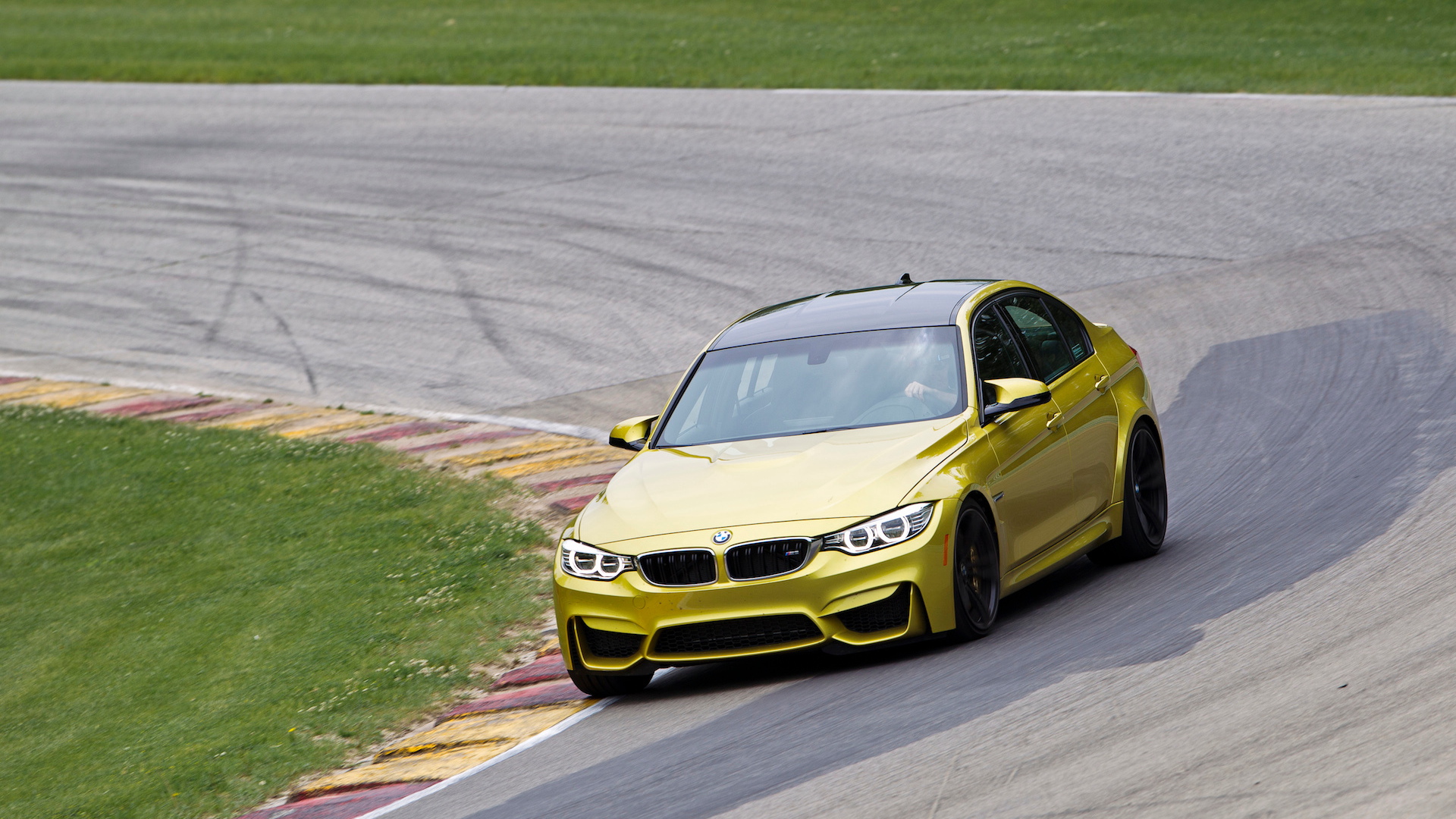 Coupe-like crossovers, carbon-bodied sportscars, urban-mode city hatchbacks--BMW can build them all, but when it gets placed in the balances and judged by its hardcore enthusiast audience, the only BMW that matters is the M3.

It's the critical nuclear core of the brand and a bellwether for Bimmerphiles and the wider auto realm alike. If a car is lithe and taut, it will inevitably be compared to the M3.

The M--and now the M4 alongside it--has to be right. The 3-Series may be BMW's sales heart, but the M cars is its soul.

Both are new for 2015, and both have some history to overcome. The last M3's been widely regarded as a hefty high-speed specialist that veered a little too far away from BMW's lightweight, nimble roots. The M4? It's an unknown.

We've now had time to drive the M4 and M3 on the track--Wisconsin's Road America, the Gigantor of woodsy thrill rides--and the M4 extensively as a part of our Best Car To Buy driving on Malibu's more challenging canyon roads. (Yes, we're now long after the first drives actually happened, but sometimes life happens.)

What did we find? A car that's astonishingly fluid transitioning between wide sweepers, one that's fearsomely fast, but something of a ditherer when the roads get really tight.

The running gear underpinning the M3 and M4 occupies the adults-only corner of BMW's hardware store. The centerpiece is a 3.0-liter twin-turbo in-line six rated at 425 horsepower and 406 pound-feet of torque. Up 2 percent in power and 38 percent in torque, the S55 engine's peak torque arrives at a low 1800 rpm and sticks around through 5500 rpm--where peak power arrives and lingers through a soaring 7300 rpm.

The rev limiter body-checks throttle input at 7600 rpm--but you'll shy away from it before then. This engine just doesn't sound fluid or muscular in the way old BMW in-line sixes did, or the current crop of competitive V-8s do (RC F, Mustang GT), even with piped-in engine noises filtered and amplified for your enjoyment. The classic BMW ripple has turned into a wall of white noise.

Making up in crazy speed what it lacks in charisma, the M3 and M4's six pounds out 3.9-second 0-60 mph acceleration times like it's dealing poker. That's when paired with the M-DCT dual-clutch transmission. If you opt for the six-speed manual, that figure rises to 4.1 seconds--it's the price you pay for rowing your own gears, though you won't have to worry about rev-matching even if you pick the three-pedal 'box, as BMW has included automatic throttle-blipping that's shut off when the M's put in Sport+ mode. In either body style, top speed is capped at 155 mph, a number Road America brings within tantalizing reach.

Managing the power at the rear is a new Active M Differential, an electronically controlled, multi-plate setup that's a degree more sophisticated than a mechanical limited-slip unit. BMW also fits the M3 and M4 with its M Dynamic Modes, that offer tailoring for the stability control system--even turning the stability and traction control systems off completely.

The suspension teams the usual front struts and multi-link rear, with more aluminum used to reduce unsprung weight. You can add it right back in with the optional Adaptive M suspension which gives direct control over Efficiency, Comfort, and Sport settings. And on the controversial end, the M cars have electric power steering that BMW says has been designed and built with the track in mind. It too has three driver-selectable modes: Comfort, Sport, and Sport+. Carbon-ceramic brakes are an option, and Michelin Pilot Super Sport tires are standard. All the driving modes can be programmed into the M1 and M2 buttons on the steering wheel, just a tap away when you're driving.

Unlike some other pony cars we could name--let's be real, the M4 has essentially evolved into maybe the world's best Mustang--the BMW actually makes concessions at losing weight. It's down about 176 pounds to just below 3,300 pounds for the coupe, according to BMW, via an aluminum hood and front fenders, a carbon-fiber driveshaft and strut braces, less sound insulation, a composite decklid, and selective deletions like the seat-belt presenter found on 3-Series and 4-Series, non-M cars. Maybe 176 pounds isn't a huge amount, objectively, but the Bimmers are marginally larger than before--and there's more weight to be saved with the carbon-fiber reinforced-plastic roof (11 pounds lighters on the sedan, 13 on the coupe).

The weight loss works with aerodynamic tweaking around those massive front ducts and hulking wheel wells. And to keep the M3 and M4 bubbling, not boiling over, on the track, there's a track-intent cooling circuit for the engine, turbos, and transmission. Even the intercooler gets its own coolant pump.

What happens when driver inputs filter through a stronger and somewhat lighter body, via BMW's home-wired neurotransmitters, to some of the most challenging pavement we as Americans can throw at it?

From Road America to Malibu

Step in the M, punch the happy buttons (start, Sport+ everything), let the masterfully sculpted buckets grip you like an old clothed friend or a new undressed one, and jet out of Road America's long pits to the miles of beautiful track haunted by equal amounts of menacing trees and tire marks. These M cars settle in like they're born to scorch the earth at 150 miles per hour per g. You can catch the the drivetrain napping if you try very hard, but the dual-clutch takes full advantage of the turbo six, banging off shifts with a firm smack.

And after a few of the initial corners, we'd dial off some of the Sport+ steering, down to Sport, maybe even comfort. What's going on at the wheel level sits behind an electronic steering filter, and the gain programmed into the steering only amplifies bump-steer as you slide over curbing. On such a huge track with relatively few harrowing corners, the M's still wickedly responsive even in its most relaxed mode. It acts so quickly and so narrowly, you can point the car through apexes even in this least ambitious mode. You enjoy the unwinding view, while it worries its way around corners, working algorithmically about 5000 times harder.

Meanwhile, the third-gen turbo six keeps the turbo game tight in Sport+ mode, yanking the M out of longer esses with authority on the stretch of the track that seems closer to Michigan's Upper Peninsula than to pit row. Chalk up the massive amounts of confidence the M musters on Road America to the carbon-ceramics and tires--they're an A-list tag team.

Three laps in, and the M completely asserts what it's best at: quaffing long uphill runs at the horizon with gusto, shaving a hundred miles per hour undramatically off with the carbon-ceramics, settling firmly and predictably into uphill 30-degree bends without a knee bent, maybe just a judder through the front struts because physics. It's tough to call this M a sports car, but few grand tourers come closer to touring-car grip and balance.

Switch venues to the ersatz real world--Malibu's heat-battered canyons runs, the only thing hardscrabble about the entire community--and the M goes a touch more soft-focus. That might be flattering to the celebs dwelling cliffside, but not to a $63,000 sports machine with its legendary backstory.

Out here, it's pronounced how much the M4 now feels like Ford's Mustang, or vice versa. That's less an indictment of what the M3 and M4 are today--they're measurably better than the last-gen cars--and more a testament to the clear direction Ford is headed with its pony car.

Above Malibu, the first thing to do is play with the toggles that control throttle and transmission, Adaptive M stiffness, and power steering heft and speed. Fuddling with it over Decker Canyon Road's fantastic slideaways and the outer reaches of Mulholland Drive, we settled on Sport drivetrain, Sport dampers, and Comfort steering, slacking on the shift response because of the jitters it imparts on such tightly packed corners.

It's on these 15-mph switchbacks where the steering doesn't have it absolutely nailed, where the rear tires tussle endlessly with whatever stability control is still enabled, or squirrel through them with all the help sent home. The M's too big and strong to slew around in its control-freakiest setup on these roads. It's not unrewarding, but you get the constant feeling it's only arm-wrestling its way through the tight corners so it can hunt down the big-mph curves it knocks down like perfect 7-10 splits.

What used to be a flyweight is a muscled-up Schwarzenegger of a 3-Series. Brand aside, it's honestly a tough choice now between a $63,000 BMW, or a $38,000 Mustang GT with a stick shift and a Performance Package, and about two grand worth of further suspension tuning to cure its bounding gallop.

The best M to buy

Optimizing the M3 or M4 doesn't have to be painful. Once you've absorbed the body blow of a $63,000 base price for the sedan, or about $65,000 for the coupe, topping either M off with a few necessities won't seem too much a stretch. As for the bodies themselves, we're told it's a matter of taste. BMW swears the weight balance and center of gravity are nearly identical on both cars and though we drilled away at Road America to find a difference, it boiled down to extra leather seats and a less alluring roofline.

Either way, the rev-blipping six-speed manual is standard. It's lovely, but M cars in our world are daily drivers too, so the dual-clutch ‘box is worth the $2,900 spend. Also standard: navigation, carbon-fiber trim, and heated power front seats. A BMW M Laptimer app for smartphones is part of the electronic gadgetry in abundance in the new M. Connected to the car's on-board computer, the app can record the car's speed, longitudinal and lateral acceleration, engine revs, which gear is engaged (for M-DCT models), steering angle, accelerator position, fuel consumption, and more. The data can then be analyzed later.

A rearview camera is unconscionably an option inside a $4,000 package ($4,300 on the M3) that bundles a head-up display with special M functions, parking sensors, rear heated seats and steering wheel, and satellite radio--though you can throw in more weight with a sunroof for no charge if you want. We might be convinced into the $1,900 package that includes blind-spot monitoring, lane-departure warning, and active braking, but the $8,125 step-up for carbon-ceramic brakes is really more like a couple grand a month, when you throw in the concordant track membership and tire budget. At that point, you're easily double the price of entry for something American, something a little more domesticated, but something with a lot of up-spend potential.

Be reductionist with us for a minute. This BMW M car's undoubtedly better conceived and executed than the weighty, high-revving V-8 model it replaces. It's also a lot like a full-size pickup: prices have shot up exponentially, leaving all sorts of room for more compact, more affordable new entries that can feel more connected, more grass-roots than the M cars we hold up as icons.

With the new M3 and M4, the brilliance is at the forefront on a spectacularly open track surrounded by straight roads and right-angle turns. A sinewy set of curves shines a harsher light on how far it's come, and for some, gone.

Our takeaway: if you go with pricey German gusto, choose your roads wisely.