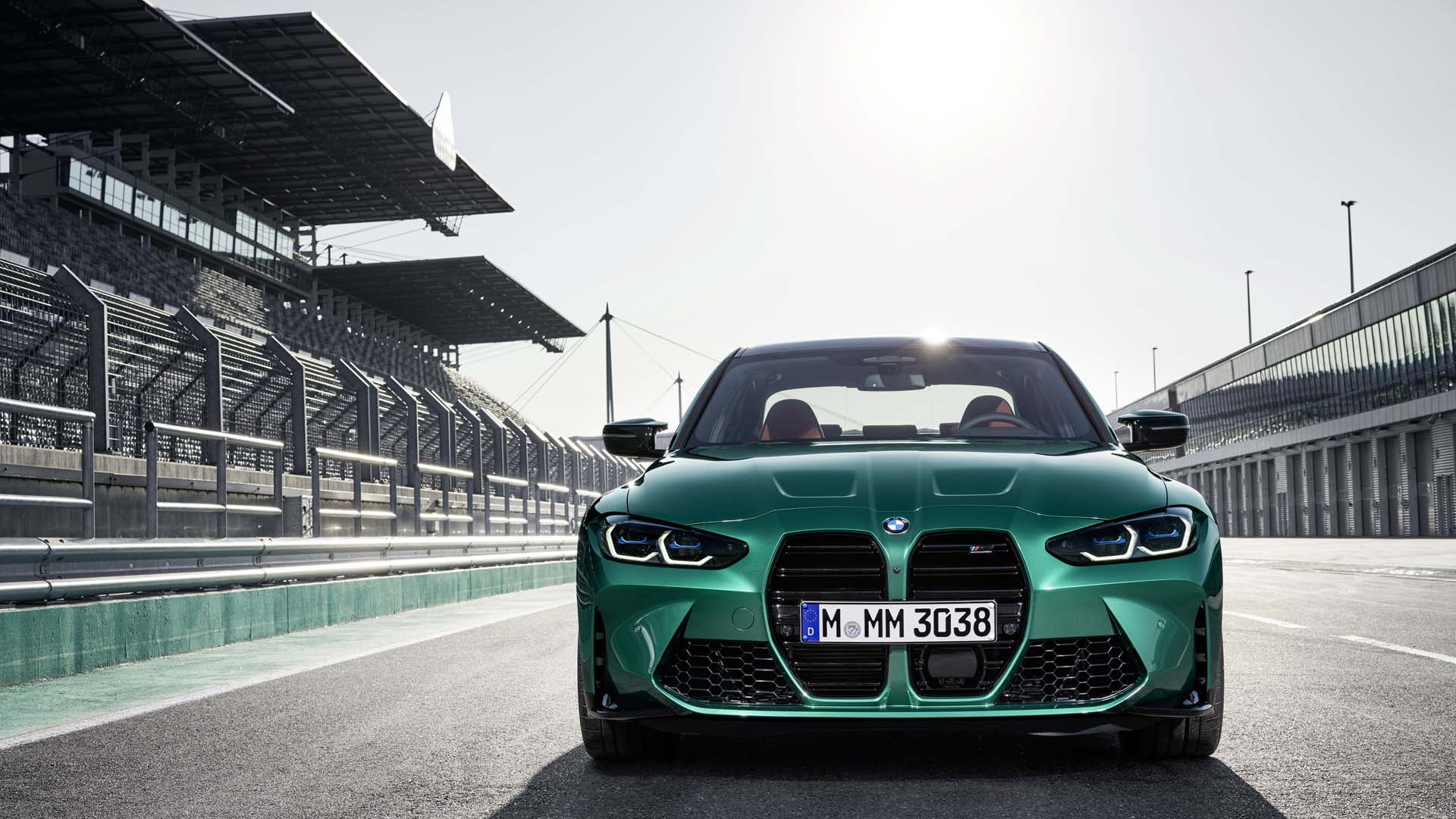 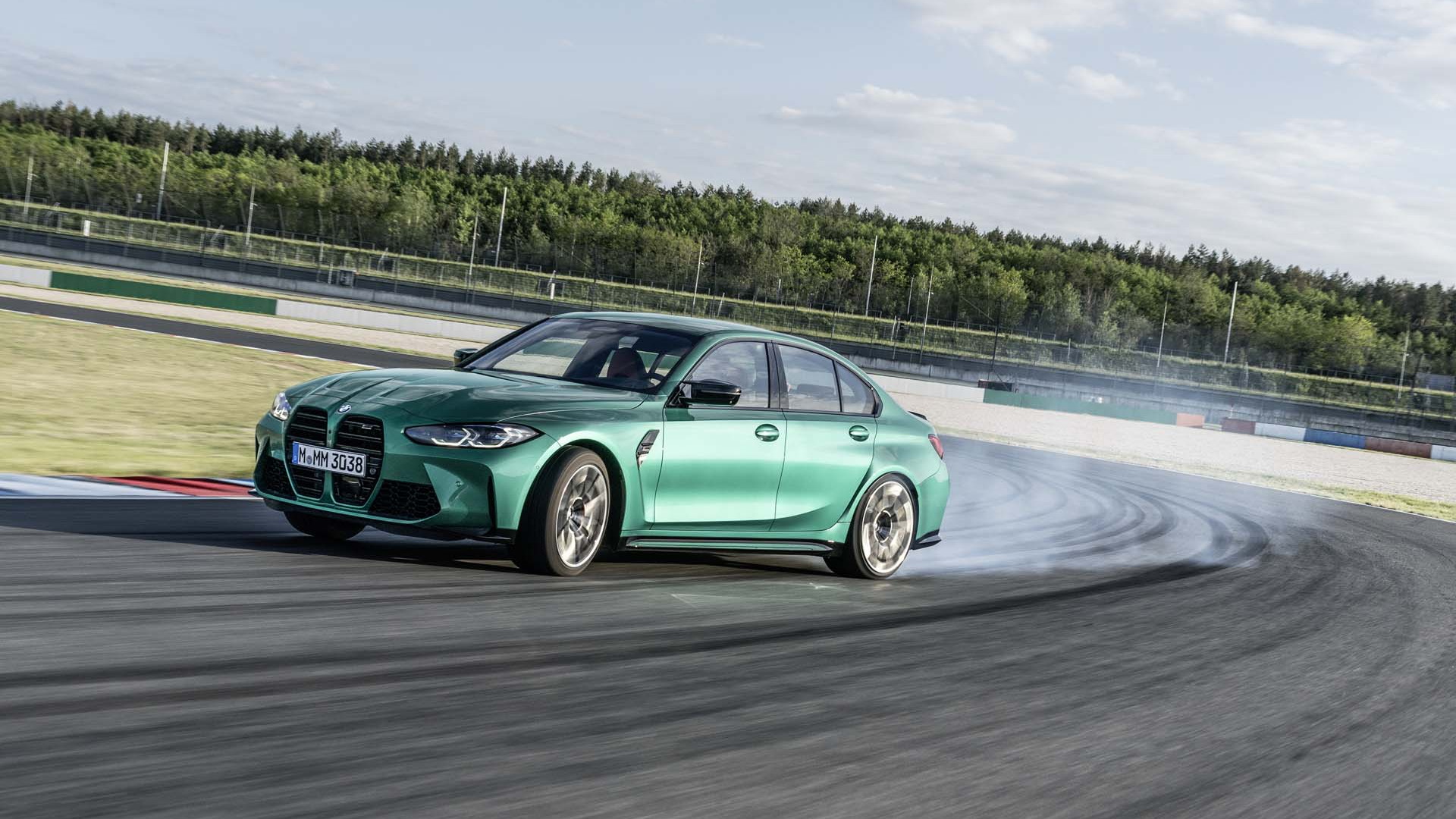 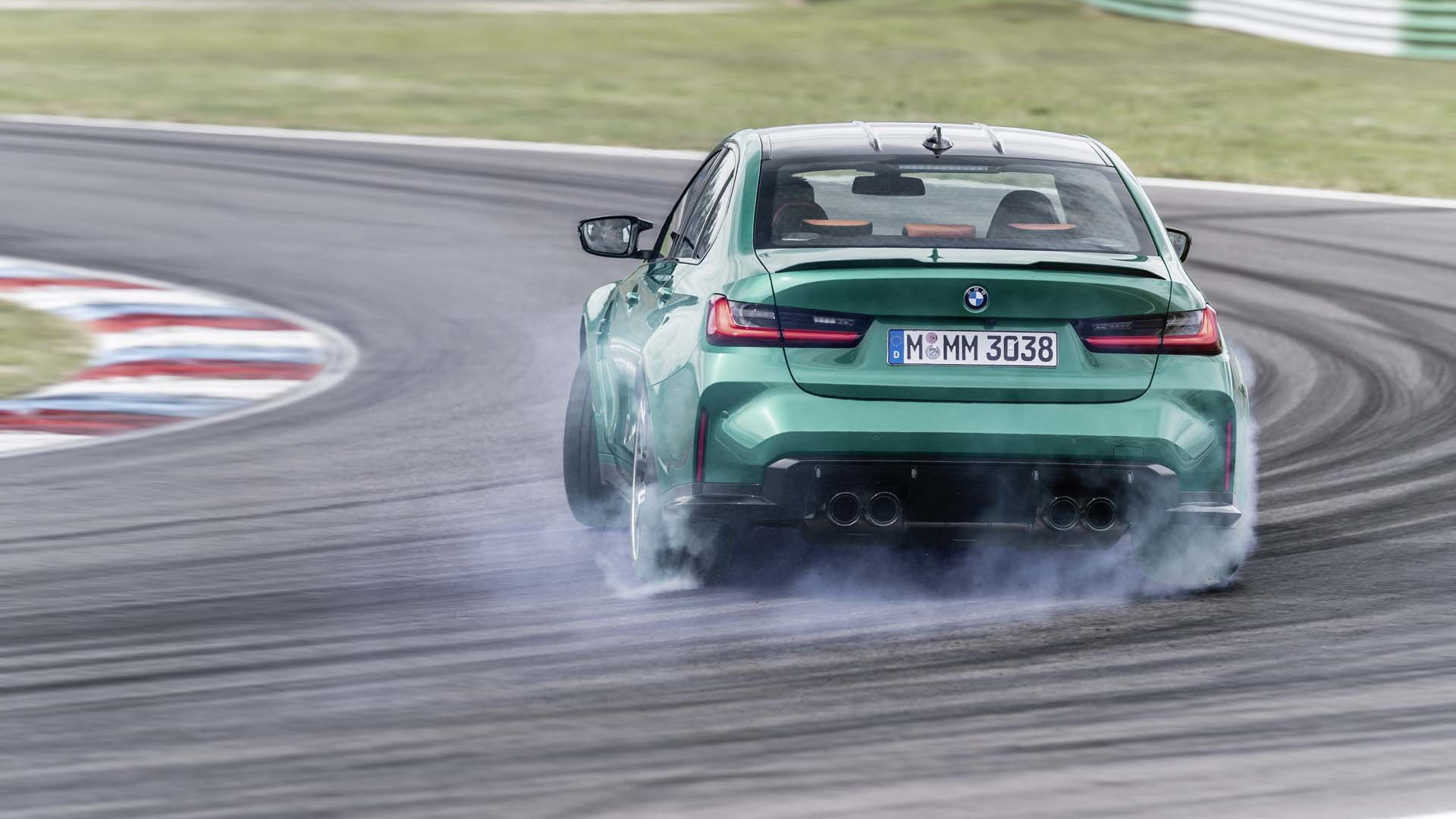 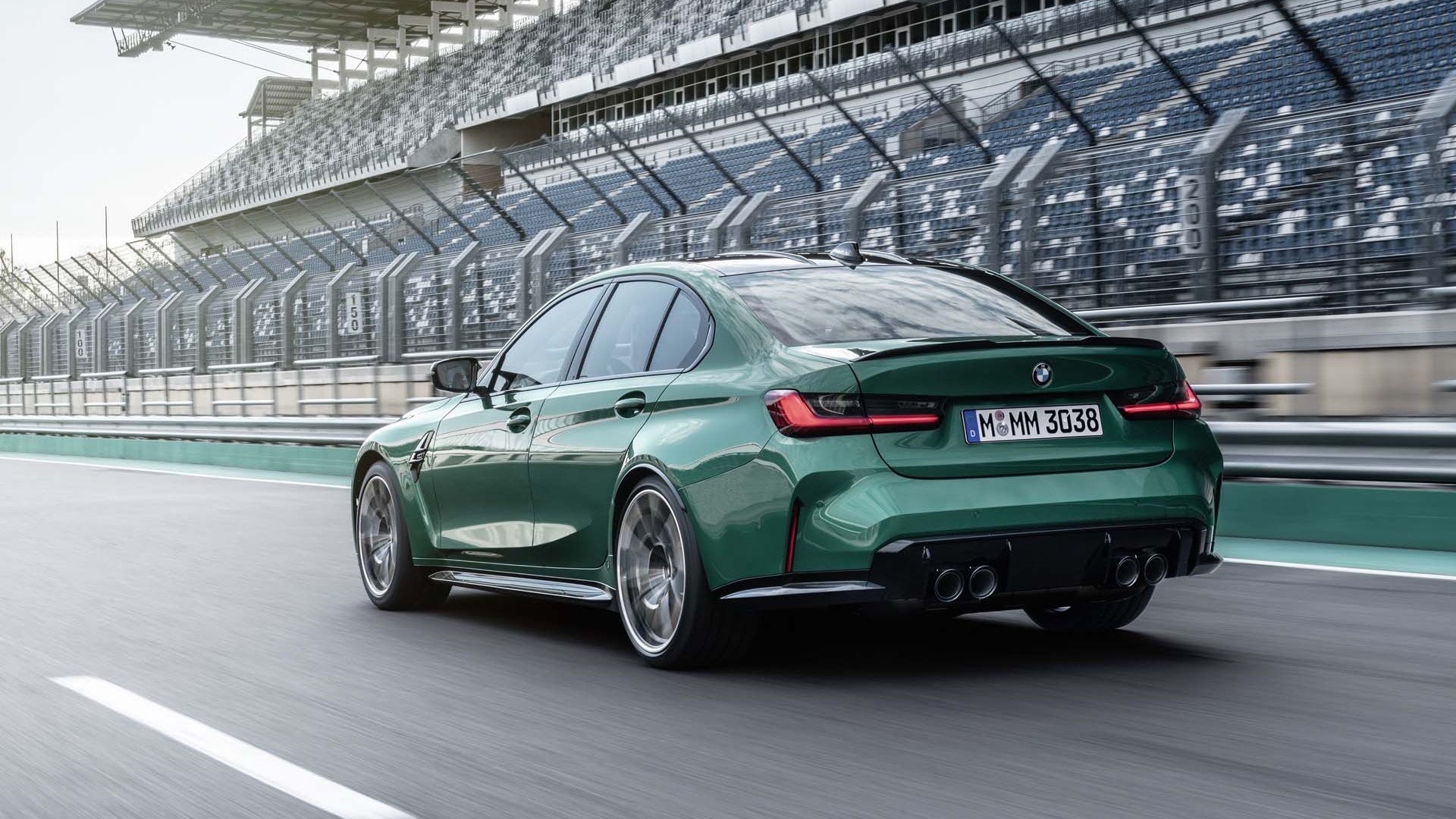 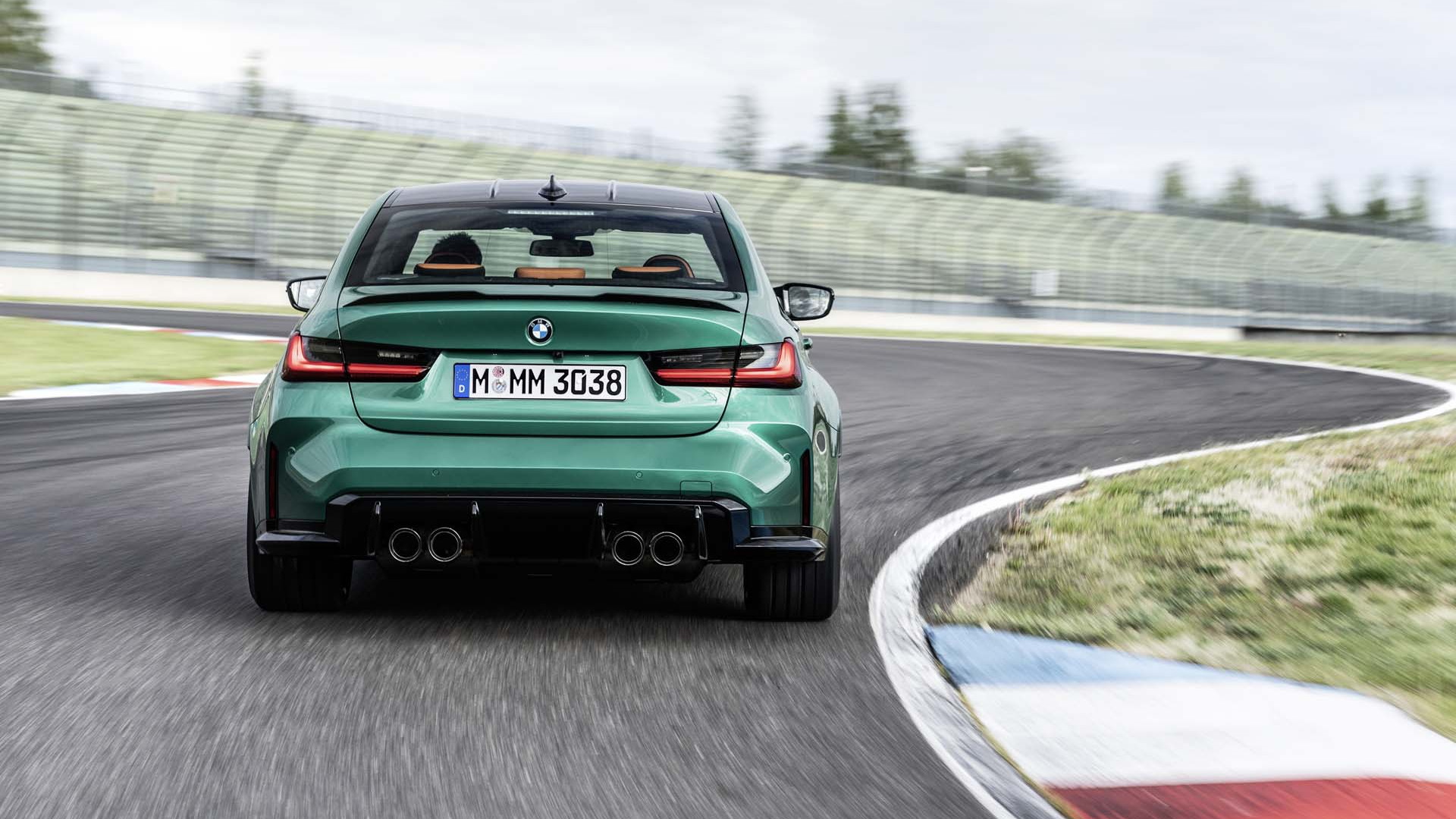 The M3’s going through reverse puberty.

It’s not just the bottle-opener grille, which juts out like teeth that need braces. It’s also the nods to younger drivers and to gaming culture that resonate clearly: the narrow-waisted carbon-fiber bucket seats, the square inches of touchscreen. They send distinctive vibes before you rocket forward with the equivalent of a cheat code: launch control. In some ways the ultimate driving machine has become an ultimate gaming device.

The high score still means a journey in the real world. For me, that meant a trip to north Georgia on the first truly spectacular weekend of the year. The M3 and I Benjamin Buttoned across the lowest of the Appalachians, squeezing between cyclists, bikers, and lazy weekend drivers, as I sorted out this M3’s hot take on high performance.

BMW quotes a 0-60 mph time of 4.1 seconds for the base car and a top speed limited to 155 mph; it’s set at 180 mph with the available M Driver's Package. The M3 Competition shaves off 0.3 second to catapult to 60 mph in 3.8 seconds, with the same top-end results. On the highway, the struggle is unreal—the struggle to restrain all that power. The M3's natural cruising speed seems to be about 85 mph no matter what road you're on, and it’s nothing to look down and spy triple digits when you get lost in coffee and license-plate-judging.

Shifting takes place in another ZIP code in the M3’s relaxed phase. Base M3 sedans have rear-wheel drive and a 6-speed manual, but this Competition has an 8-speed automatic. No all-wheel drive yet, though that’s promised in the coming months, with a rear-drive mode at that.

The M3 could write the explainer story about stability and tracking. It suctions itself to the pavement, and eliminates vertical ride motions without chattering teeth over pavement seams. It’s as flat and unyielding as the voice of a state trooper when they tell you to “get out of the car.” I flick between other cars in traffic while I flick between America’s Top 40 countdowns (’70s and ’80s, of course); the M3 gives me a blending brush worthy of Bob Ross.

I leave the interstate for less divided roads at Georgia’s stand-in for Los Angeles’ best twisties, on “Millholland Drive.” It lures me with brown signs that cue up state parks—and the roads that lead to them, loaded with hairpins nested deeply in valleys and very little runoff. I turn left to begin the 47-mile trek through mountains that look like a green comforter crumpled on an unmade bed, lean into the gas, and engage the limited-slip differential to light the M3 like a bottle rocket.

The M3 answers the call with immediacy. It forges widely scattered apexes into a singularity thanks to all that power, despite its 3,830 pounds of curb weight before options and humans. Its double-joint spring strut front suspension and adjustable dampers give it an amusement park ride, stuck to the surface while I float an inch out of the seat. I'm surprised to find the M3 has some body lean; drilling into the tightest of kinks, it compresses then tilts into curves with more slop than I need or want.

Time for a toggle of its M Mode flaps, the red ears on the steering wheel that call up pre-programmed tailoring for its fuel mapping, shift points, braking sensitivity, and steering weight. The M paddles may as well stand in for “missile.” The M3 starts to seek its heat when I click on the left one that sends it into Sport mode across the board, and refactors the head-up display from a benign speedometer to a big hockey stick of a tachometer that slashes across the windshield. Set those parameters as you like, hold the M mode button, and create a favorite—it’s a skin on the M3’s performance interface.

While I’m toggling, I take care to leave the M3 in one of its less permissive traction and stability control modes. I’m touring zero-runoff roads with 30-foot drops and cyclists struggling to climb hills. Everyone has gotten the message this weekend, it seems: get out of COVID protocols by getting outside. I have to pick the right corners to flog.

I stitch together a half-dozen uninterrupted turns, and figure out what’s not quite right. The M3’s steering is vague on center. It's the difference between a good iPhone shot and the same .RAW file from a Canon 5D Mark III. The depth of information that BMW used to deliver in M3s has been filtered off to something that approximates the original. The slightly fuzzy center makes it too easy to add too much steering in a corner and have to back off a little. It’s as we said with the last-generation M3: It’s spectacular at high-speed sweeps, quibbly in canyon carving.

It’s not for lack of tires. The 275/35ZR19 front and 285/30ZR20 rear Michelin Pilot Sport 4S tires command-strip themselves to the cleanly paved road. The M3 can haul itself down impressively too. Its huge standard brakes—which include six-piston calipers that clamp down on 15-inch rotors up front and single-piston calipers that bite into 14.5-inch rotors at the rear—have been hot-swapped here for carbon-ceramic units that respond as well as they can to the M3’s brake-by-wire setup. It’s not as consistent as less digitally intensive setups, but still stomps the car to a halt when needed.

I leave BMW’s Drift Analyzer alone. It can even record the duration, distance covered, line, and angle of a drift with a rating shown in the instrument cluster. There’s no way today to do that safely, not even in a church parking lot. It’s a great idea to cater to a certain crowd—the drivers who don’t care about clean lines, who put tread-wasting out there as a lifestyle.

With enough carbon and Ms to go around, here’s where to save. Take the carbon-fiber buckets. And give them to someone else. These sport seats have an elaborate racing-shell shape with holes carved out to lessen their weight. They’re stiff, narrow, pinchy, and have a carbon-fiber insert that looks like it might be a flip-up codpiece. Gold star for precautions taken, but I’d pass in exchange for more lumbar support and maybe an inch or two more space at the H-point.

Skip the carbon-ceramics. They’re show ponies. Pass on the carbon-fiber trim too. Even this real stuff looks amateurish, especially on the shift paddles.

Take the available adaptive cruise control (only offered on the Competition car), too, knowing there’s no good place to retract your foot; there’s a hump behind your right heel that blocks any comfortable position that’s not foot on gas.

Spend the extra on brightly colored leather and suitably dark paint combinations: light colors play up the M3’s unfortunate grille. Unless you want to be seen, that is. We’d opt for the head-up display, too, and enjoy the stock audio system and BMW’s well-executed touchscreen infotainment, with good voice command recognition and smart toggling between its native environment and the superior voice-to-text efficacy of Apple CarPlay.

The head-up display charms me as it warns of “dangerous left curves ahead.” If only it could warn me about the cyclists, cars, and motorcycles queuing up ahead like they’re running heats in the good-vibes-destroying Olympics.

I happen upon their marshaling point soon enough. There's a whole Tour de France of bicycles and passels of one-seaters parked along the roads leading down to the nearest college town. They make it impossible to drive a car like this to its limits or to even enjoy it: the Jaguar XF sproinging along trying to impress, the trio of C7 Corvettes, the BMW M2 who can’t keep his ass in his lane, a whole divorce court of Shelby Mustangs revving and jockeying for alpha position. A Lambo. An Alfa 4C, for god’s sake.

They all notice the M3, of course. How could you not? We’re all making a spectacle of ourselves, so I opt out. I don’t want to be that driver, the one who pisses off the hikers gathered at each and every trail head and scenic vista.

The mountains belong to us all, after all, and spring is here. It springs to mind: Stick to Tuesday mornings when I want to enjoy the kind of drive that was possible here a decade ago, in something like the M3. Better yet, hit the track, where its limits are closer and more safely within reach.

BMW brought me an M3 Competition with a free coat of early spring Georgia pollen. It’s like they know me.