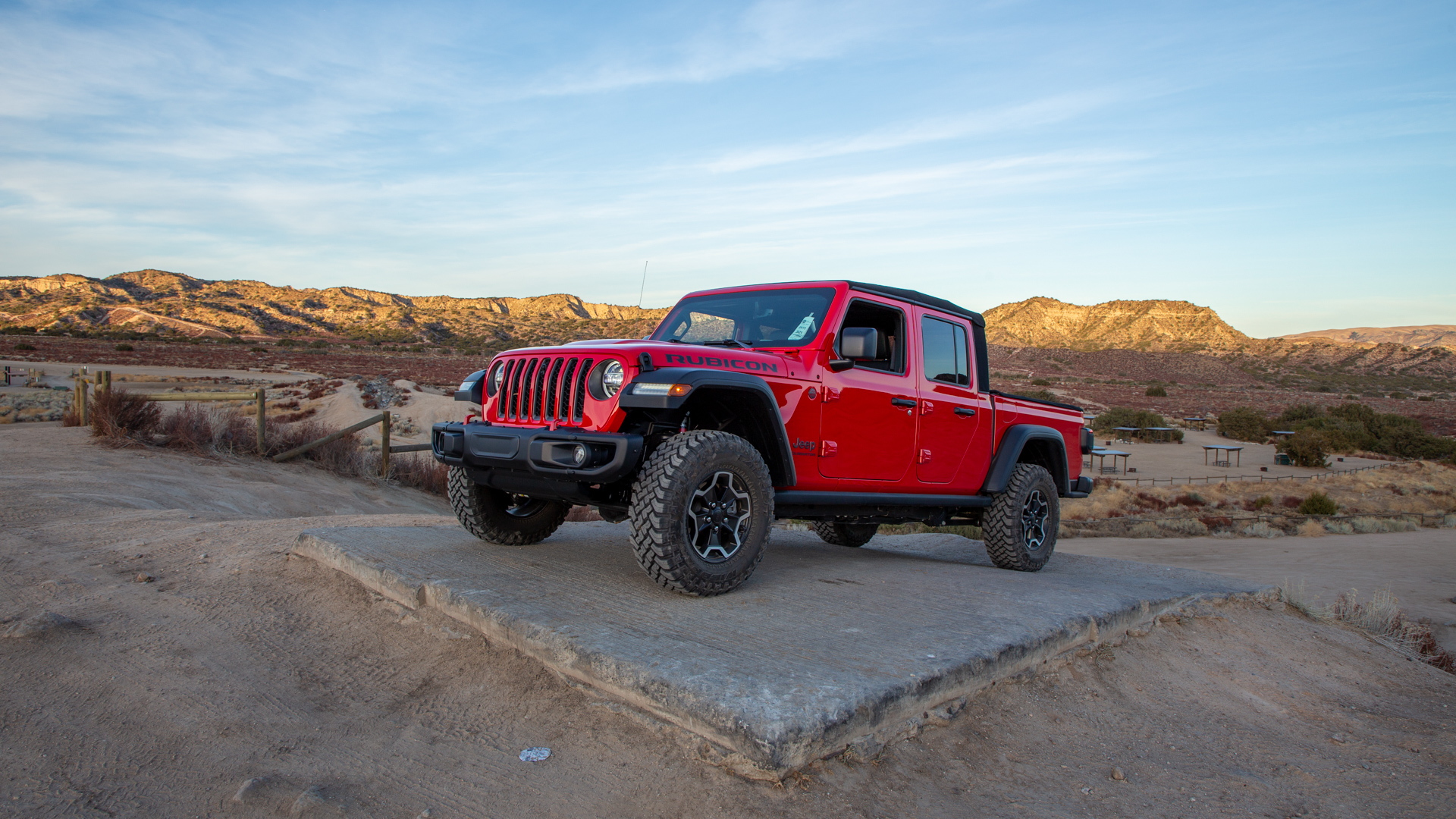 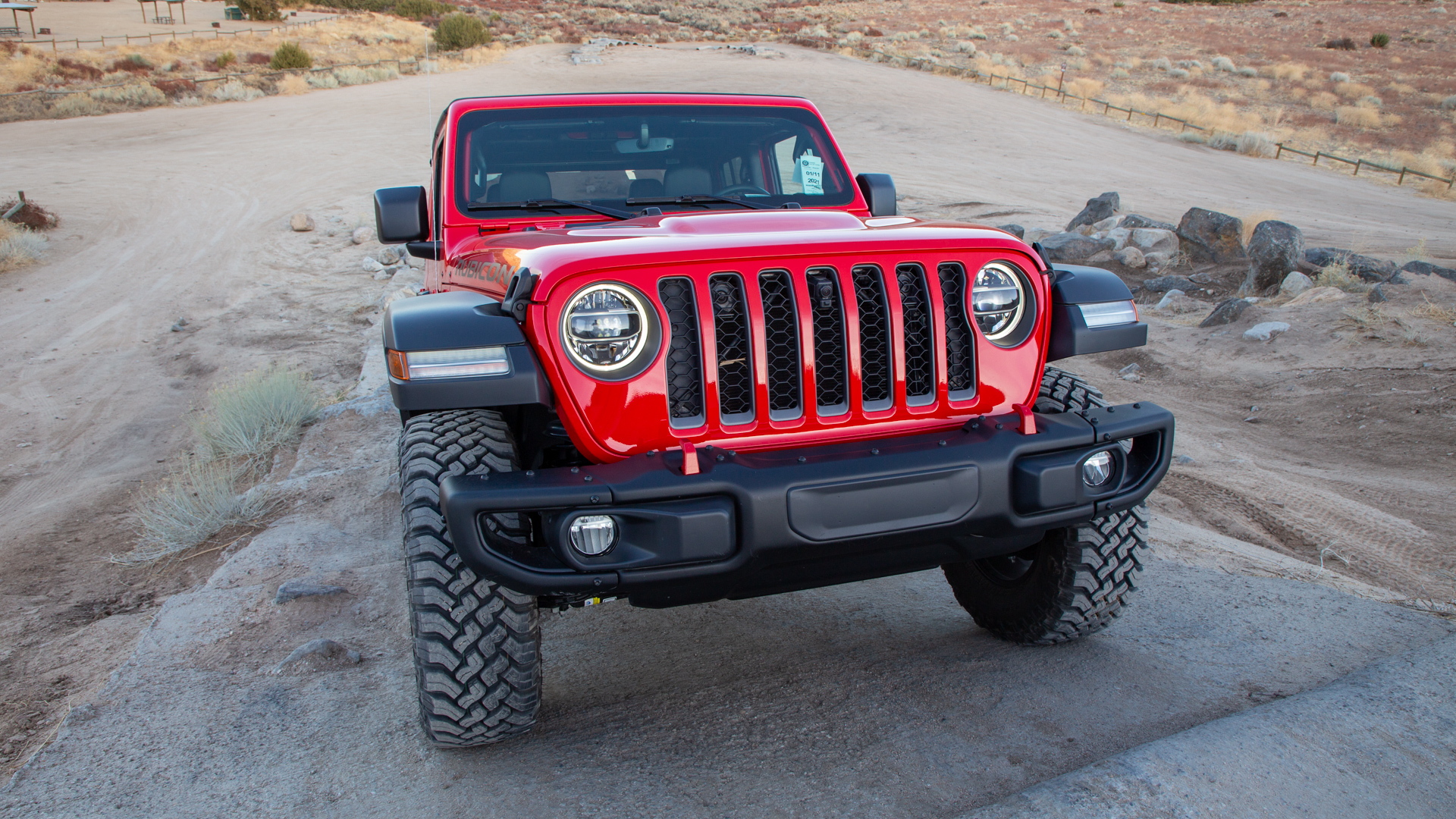 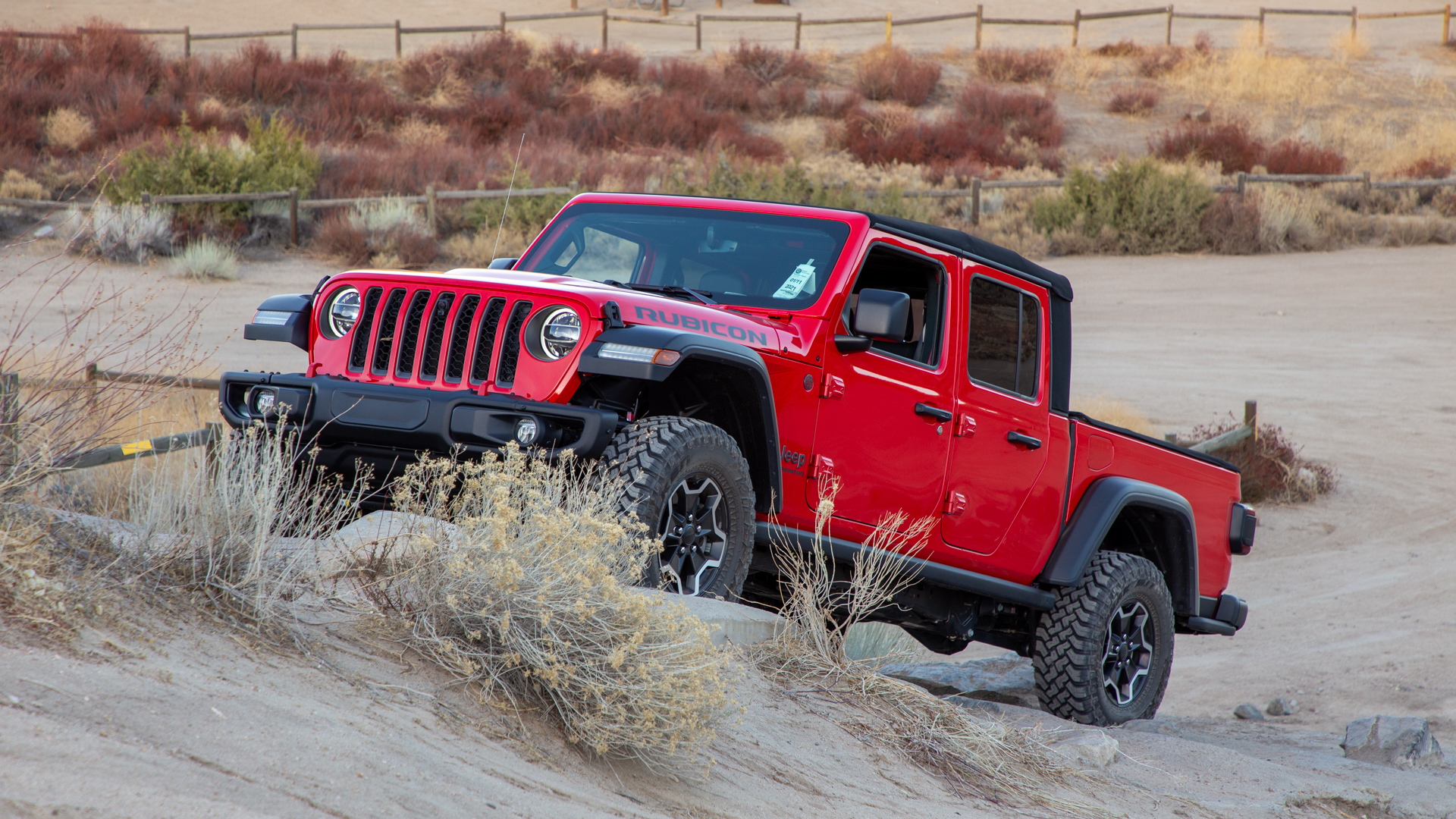 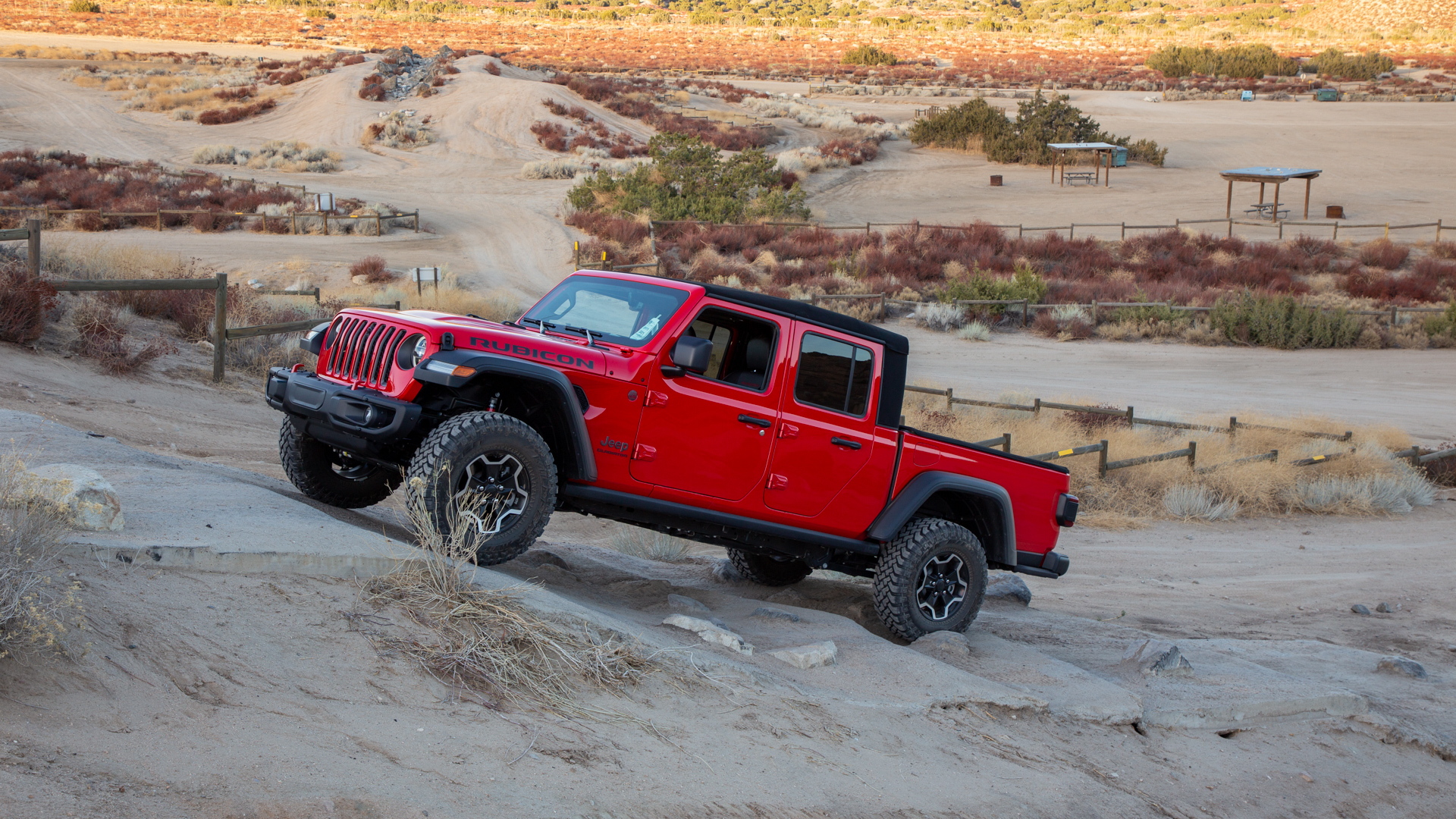 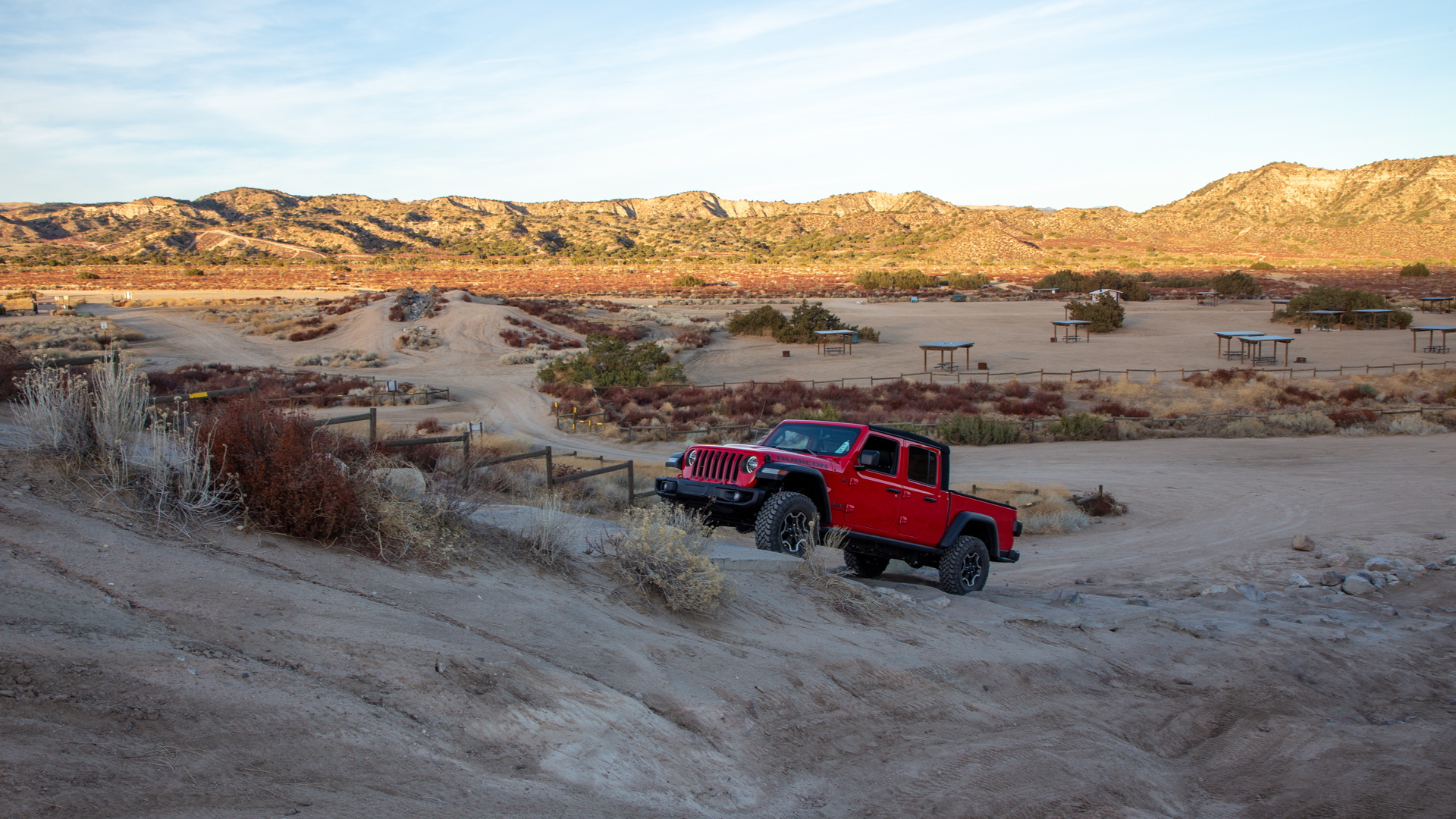 Before this year, the Jeep Gladiator had only one engine, a 3.6-liter V-6 that gets the job done, but definitely leaves some room for improvement. Given that the closely related Jeep Wrangler offers five engine options (turbo-4, V-6, mild-hybrid turbo-4, turbodiesel, and forthcoming V-8), this lack of powertrain diversity feels like a big oversight.

The addition of a 3.0-liter turbodiesel V-6 to the 2021 Gladiator begins to address this issue. The engine is not exclusive to the Gladiator. I’ve tested it before in both the Wrangler and the Ram 1500. The Gladiator represents a middle ground between those two vehicles, combining elements of each into a package that might make it the most natural home for a diesel engine.

Jeep offers the turbodiesel in three of the Gladiator’s four trim levels: Sport, Overland, and Rubicon, with the desert-running Mojave the only exception. My test vehicle was a Rubicon with nearly all the bells and whistles, which gave me a chance to see how the diesel fares off-road.

The engine’s power figures are impressive: 260 hp and 442 lb-ft of torque. That’s 25 hp less than the gas V-6, but 162 more lb-ft of torque. The turbodiesel comes only with the 3.73 rear axle and an 8-speed automatic transmission all its own, though it has the same gear ratios as the 8-speed tied to the gasoline V-6. It also features a fuel-saving stop/start system that operates rather seamlessly and doesn’t get in the way, which is precisely what you want from a system like this.

Interestingly, even with all that added torque, the turbodiesel has a lower max towing rating than the gas engine. It tops out at 6,500 pounds, versus 7,650 pounds for a Gladiator Sport with the V-6 and a 4.10 axle. Fuel economy estimates for the turbodiesel are 21 city, 27 highway, 24 combined mpg, a big jump up from the 17/22/19 mpg rating for the gas Gladiator.

With the turbodiesel, the Gladiator feels quicker around town, especially from a stop. The ample low-end torque kicks in quicker than the gas engine. It won’t win a drag race, but it feels limber off the line, and it runs easily up to highway speeds.

Like wind noise and tire noise, the diesel’s gravelly sound constantly pinged around the cabin of the soft-top model I tested. While the diesel cranks up the volume a few decibels, it didn’t bother me versus the gasoline Gladiator. At a certain point, loud is just loud.

Driving a Gladiator Rubicon is not complete without taking it off-road, so I spent an afternoon at my favorite OHV park. The added low-end torque pays even greater dividends off-road.

Maximum torque kicks in at just 1,400 rpm, but Jeep has dialed in the throttle response to make it easy to control. I appreciated that dexterity on a rock-crawling course where small throttle inputs were met by small increases in power, giving me plenty of control when pulling each wheel up onto a ledge or rock. I felt like I could stick each wheel precisely where it needed to be in both the 4Hi and 4Lo settings. Add that to the Gladiator Rubicon’s impressive clearances with an approach angle of 43.4 degrees, a breakover angle of 20.3 degrees, and a departure angle of 25.5 degrees, plus 11.1 inches of ground clearance, and you can see why the Gladiator Rubicon is an accomplished off-roader.

The Rubicon may not be “Desert Rated” like the Gladiator Mojave, it’s still plenty capable in the sand. The diesel engine is also a helpful addition here; pin the throttle and the 33-inch Falken Wildpeak all-terrain tires power the truck through the soft stuff. Fox monotube shocks at each corner do an excellent job of maintaining the truck’s stability even at higher speeds on bumpy and uneven sand/gravel roads.

I was also thankful for the forward facing trail camera ($595) on my tester. Bringing a spotter with me wasn't an option during the pandemic, so the camera provided a decent stand-in for human assistance. The display is equipped with helpful guide lines that show exactly where the front tires are headed.

Adding the turbodiesel’s extra twist has only augmented the Gladiator’s performance, both on and off pavement. However, it doesn’t fix all of the Gladiator’s shortcomings. The bed is still quite small for this class, other mid-size pickups (the Honda Ridgeline especially) are easier to live with day to day, and the Gladiator is incredibly expensive. My test vehicle piled on the options that ran the tally from the Rubicon’s $45,370 base price all the way up to $64,200. The diesel engine was a $4,000 option on its own.

The Gladiator remains a unique entrant in the mid-size pickup class and by far the most fun. The Wrangler vibes go a long way, and it’s the preferred choice when heading off-road. With the addition of the turbodiesel, that advantage grows even greater.

Jeep provided a loaner vehicle for Internet Brands Automotive to romp through an off-road course.