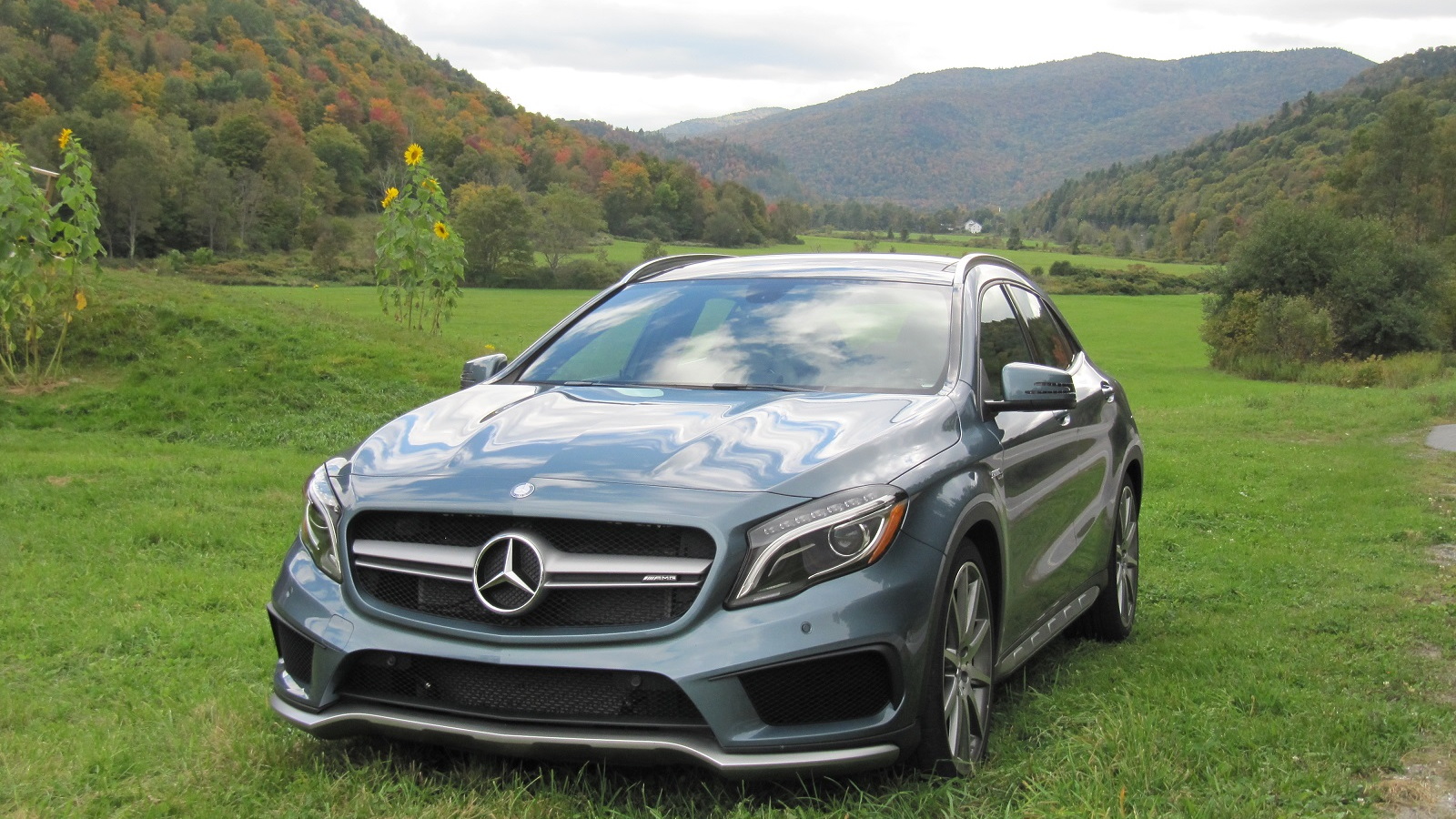 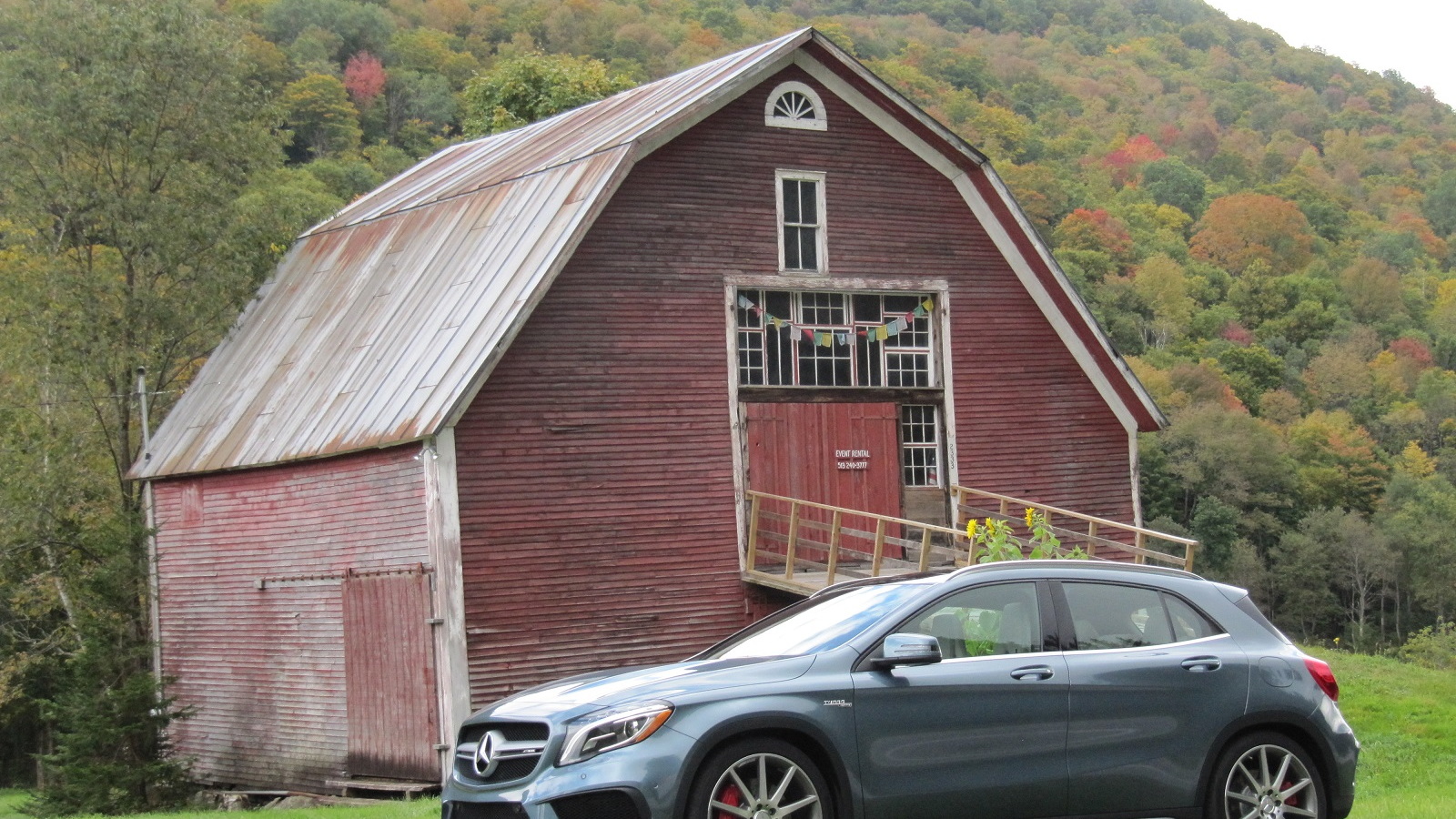 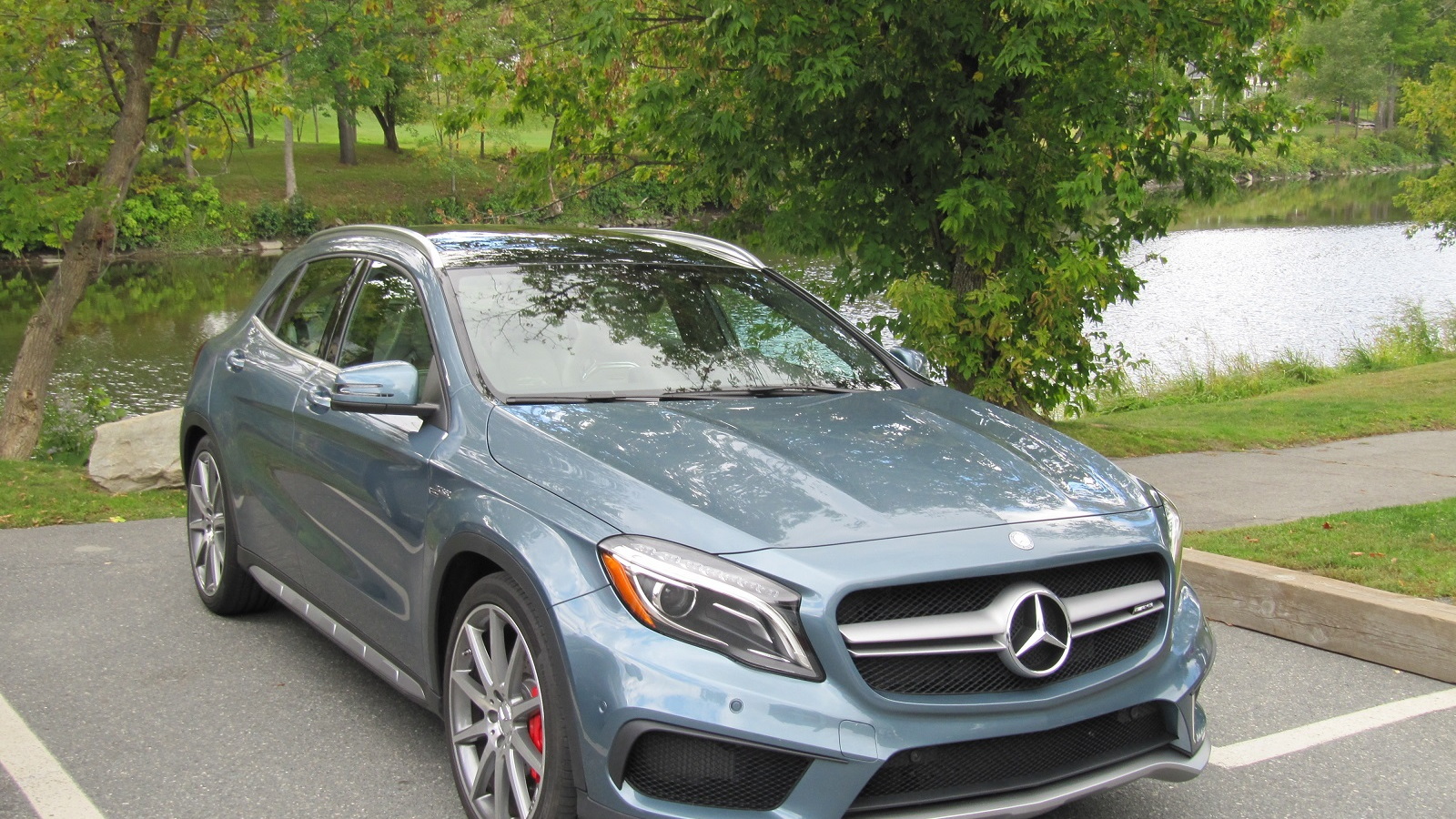 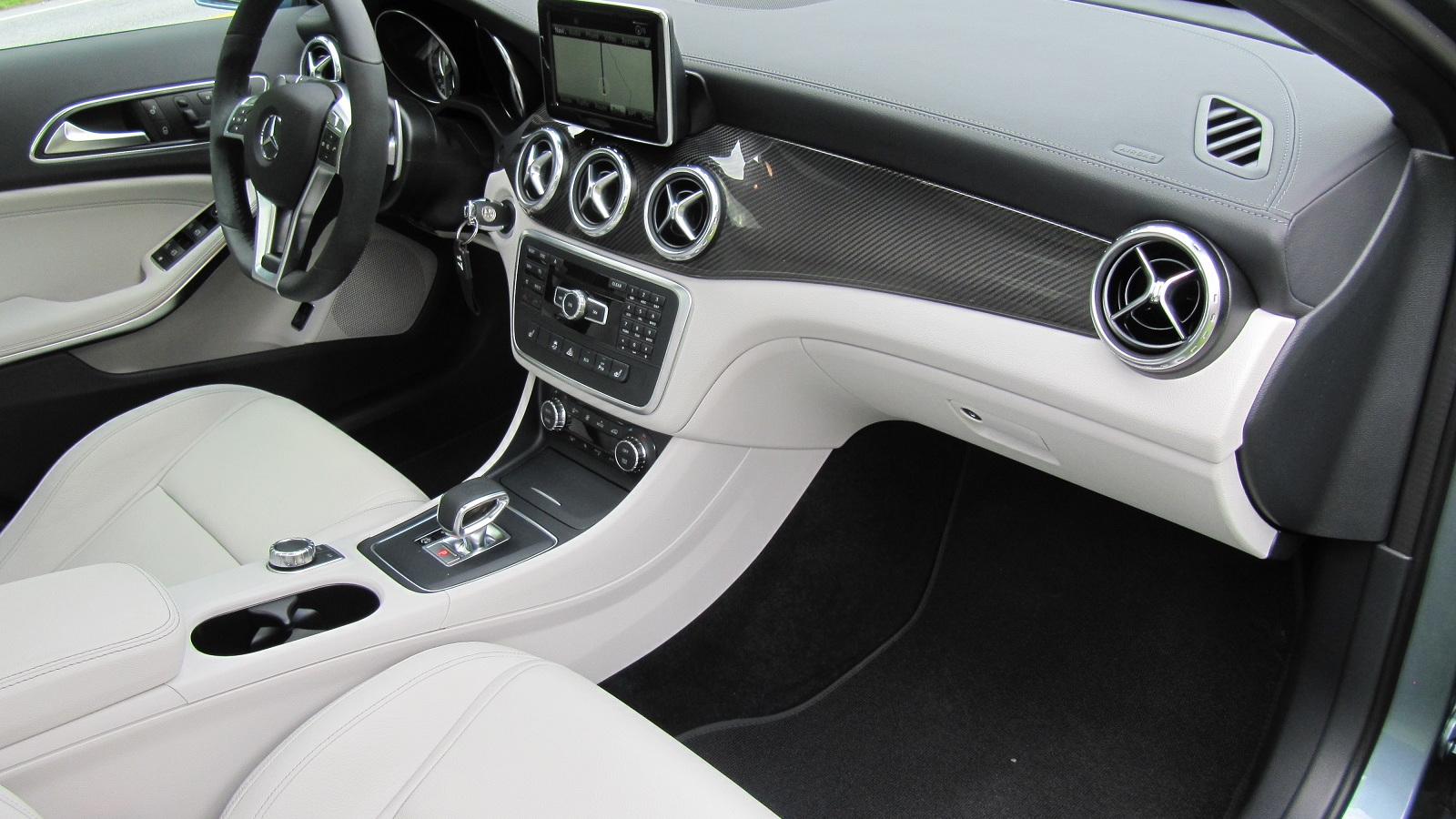 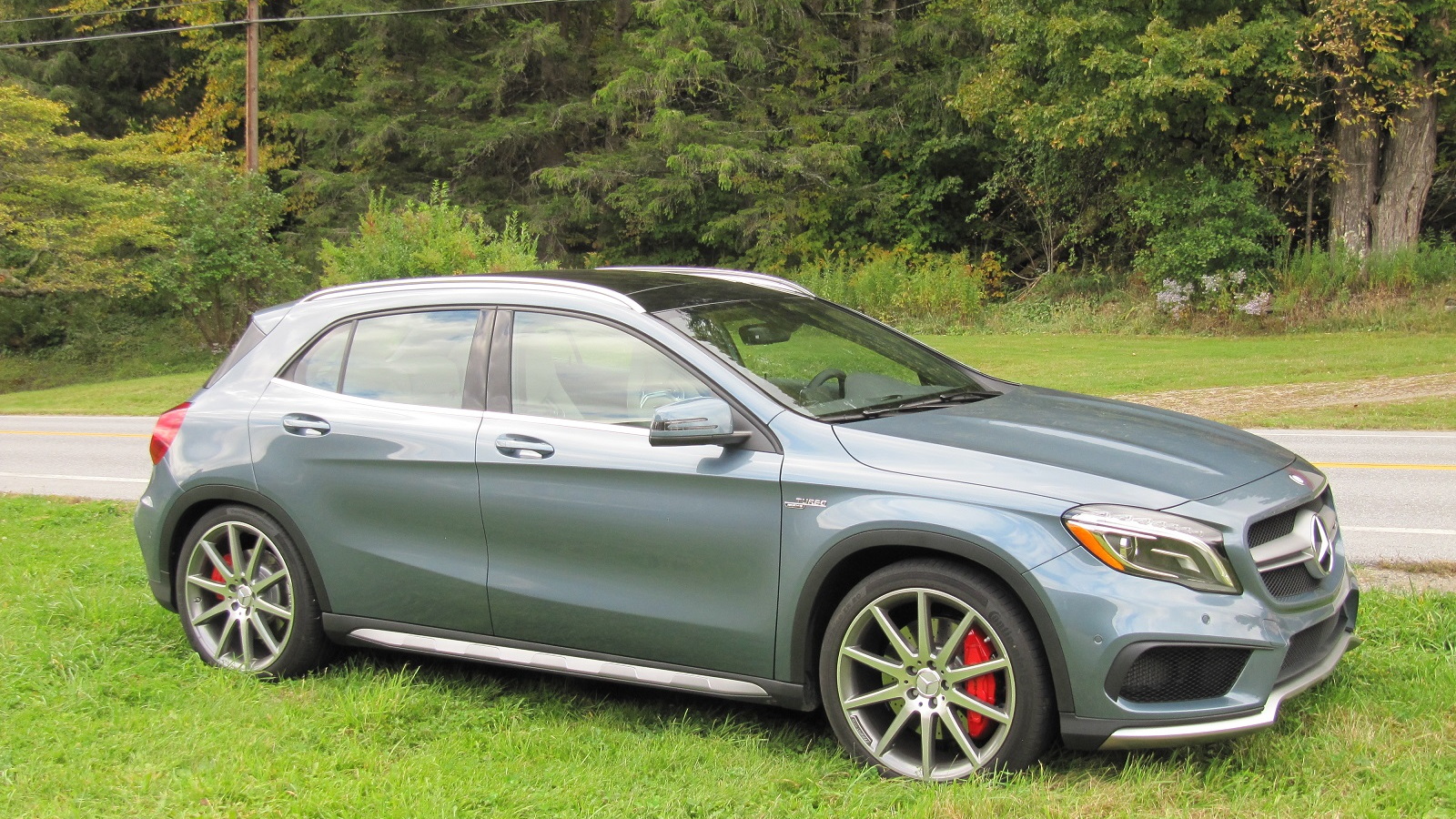 Let's get one thing straight right up front: Despite its model name, the 2015 Mercedes-Benz GLA45 AMG--soon to be a Mercedes-AMG GLA45--is no GL-like utility vehicle.

It may have all-wheel drive, but the high-performance sibling of the far more common 2015 GLA250 model sits far closer to the ground, at 4.5 inches of ground clearance against the regular GLA's 8 inches. Chalk that one up to U.S. regulatory tricks: with more ground clearance, Mercedes can deem the GLA250 a "light truck" under various government rules.

In Europe the regular GLA rides closer to the ground than in North America, but thankfully the in-house hot-rod team at AMG had no intention of making their smallest-yet Mercedes into any kind of truck, so they kept the European ride height. It's all to the good, and riding on standard 19-inch wheels and tires, the compact five-door looks low, purposeful, and beefy, just like any hot hatch should.

Yes, it turns out Mercedes has gone and built itself a hot hatch that competes, dimensionally and performance-wise, with the old Subaru WRX STI, the Mitsubishi Evo (OK, a sedan, but still), and the VW Golf R32. Like any Mercedes, however, it's breathtakingly more expensive: The starting price is $48,300--more than half again as much as the GLA250--and you can easily kick that past the mid-$50Ks mark with options, making the GLA45 AMG possibly the priciest hot hatch ever. Mercedes says only 5 to 6 percent of the GLAs it sells in the U.S. will be the AMG model.

At the drive event in Vermont last month, the company said it set out to build "a Subaru WRX for grownups," presumably fairly wealthy ones. And that's exactly what Mercedes has done. In fact, having driven the latest 2015 Subaru WRX (though admittedly it wasn't an STI, and it's no longer a hatchback), we'd say the GLA45 AMG is actually closer to the raw character of the old one.

Driving the GLA45 AMG is a distinctly different experience than the standard GLA250, and--naturally--far more fun. As well as those 19-inch wheels and tires, the suspension has been heavily retuned. But it's the engine that really makes this car, a 355-horsepower turbocharged and direct-injected 2.0-liter four that puts out 332 lb-ft of torque.

Compared to the 208-hp turbo four in the standard GLA, the AMG's engine is heavily reworked. Most of the internals have been strengthened and reinforced to allow it to put out what would have been race car-like power levels just a few years ago. Although it’s not built at Affalterbach--the traditional home of AMG, the performance sub-brand of Mercedes--each GLA45 AMG engine is still assembled by a single worker at the engine plant, and the finished item bears a plaque with his name on it.

Behind the wheel, the seats are better-bolstered and simply more comfortable, though they're not meant for the broad of beam. Even the thicker steering wheel has flattened top and bottom arcs to increase cockpit space just a bit. The ride is significantly harder and harsher than the standard GLA's, exacerbated by the very low-profile tires, but this is not a car for those who care about ride quality.

In our brief 90-minute drive through scenic rural Vermont, we blasted down country lanes and stormed up hills feeling rather like world rally drivers. While it's possible to drive the GLA45 AMG in a sedate, around-town mode, it's not clear why anyone would.

While the shift lever has moved from a column stalk onto the console, it's the paddle shifters behind the wheel that enable fast shifting, especially on twisty roads. We relished the amplified exhaust burble on every upshift, even while we found we could hang the tail out in the esses of an uphill mountain road with surprisingly little effort.

Can you tell we had fun?