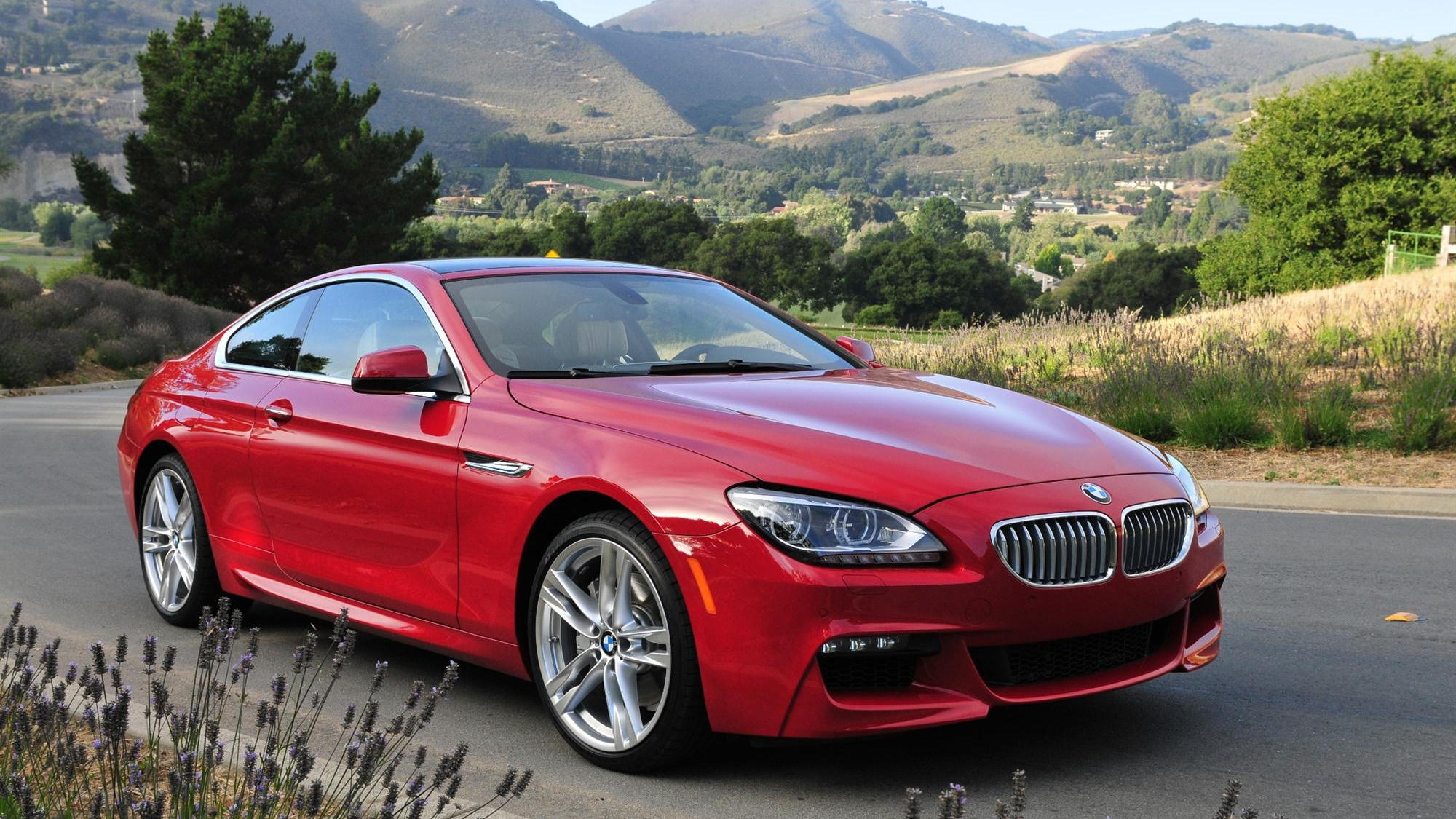 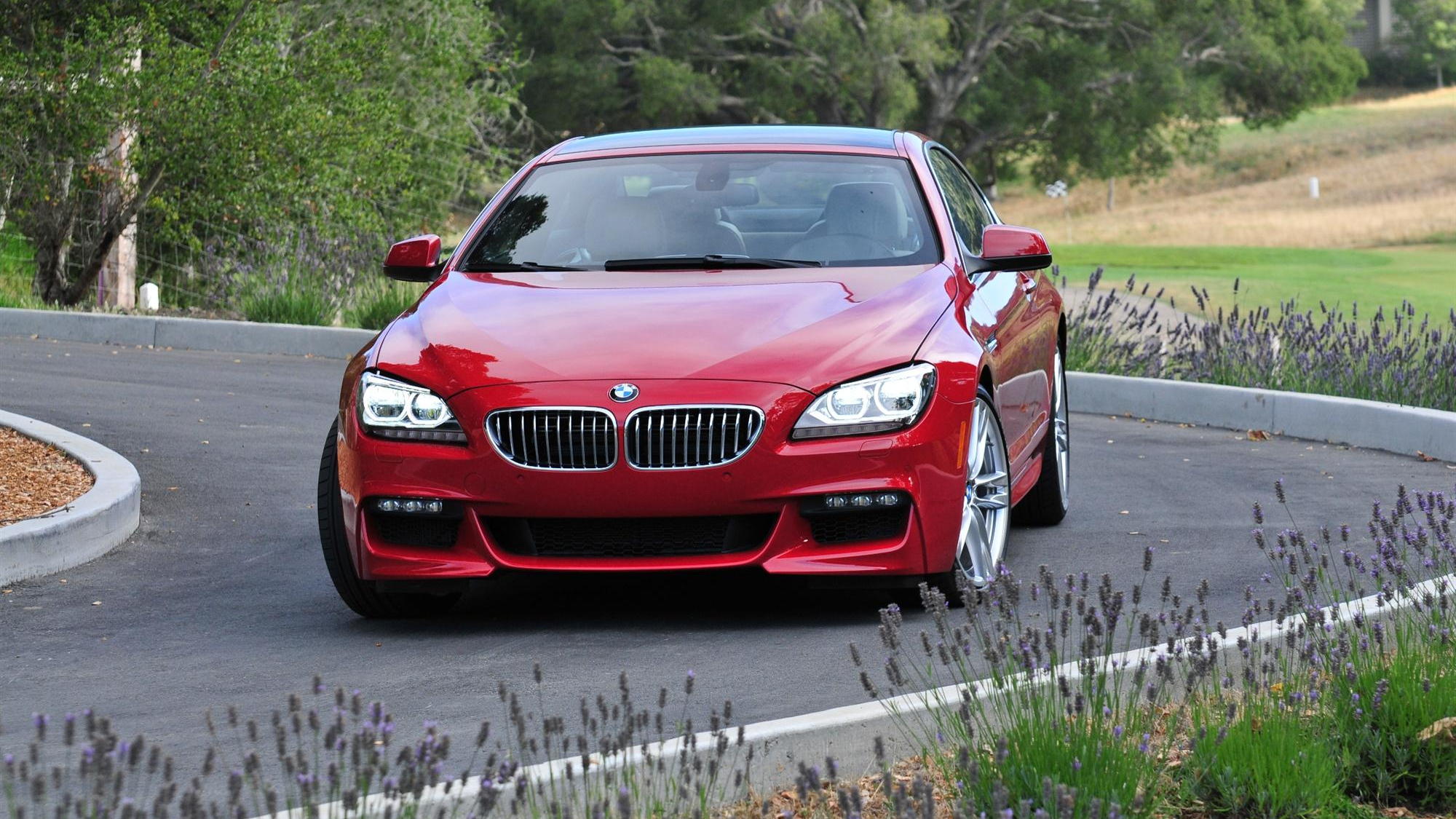 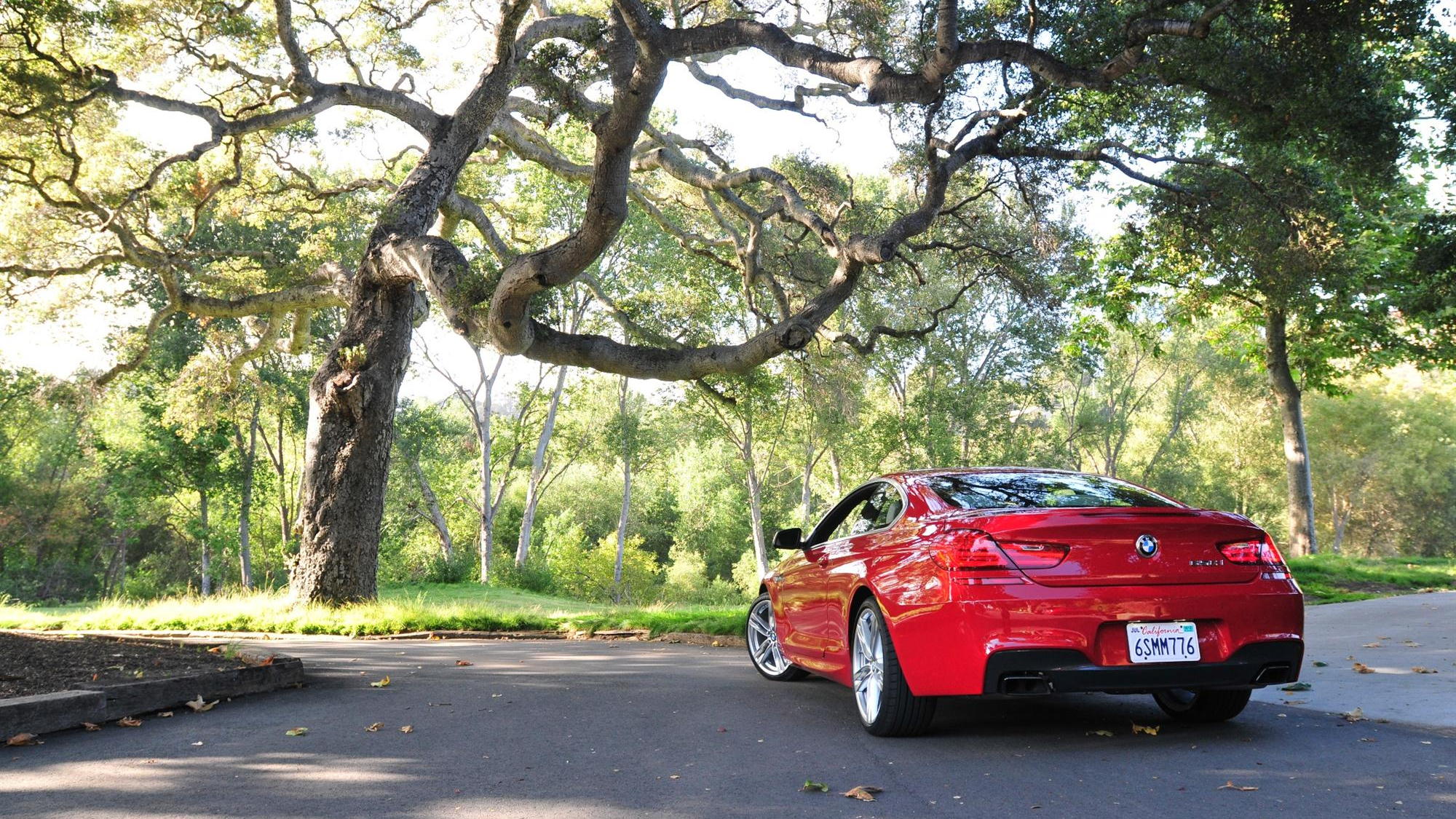 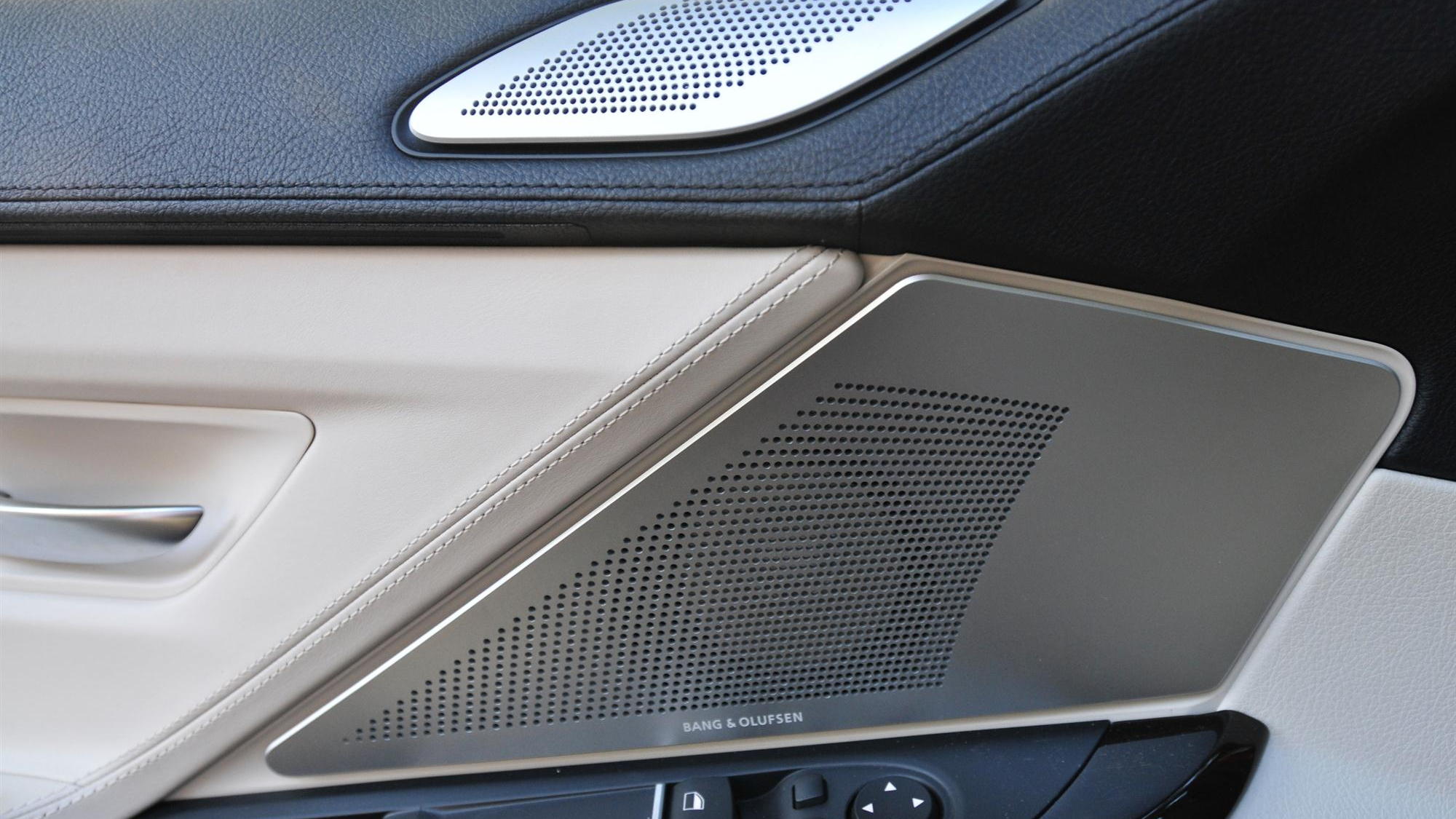 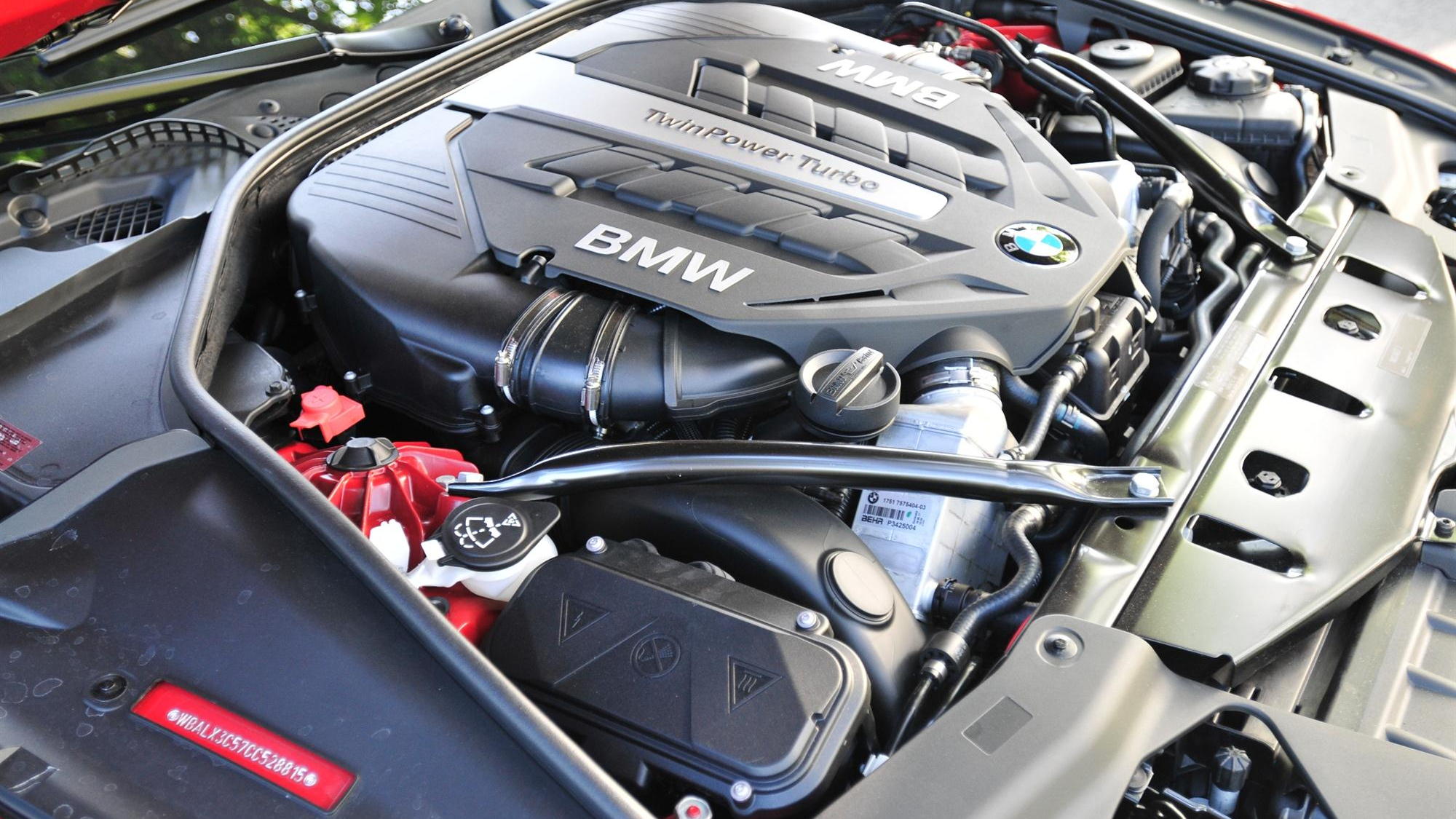 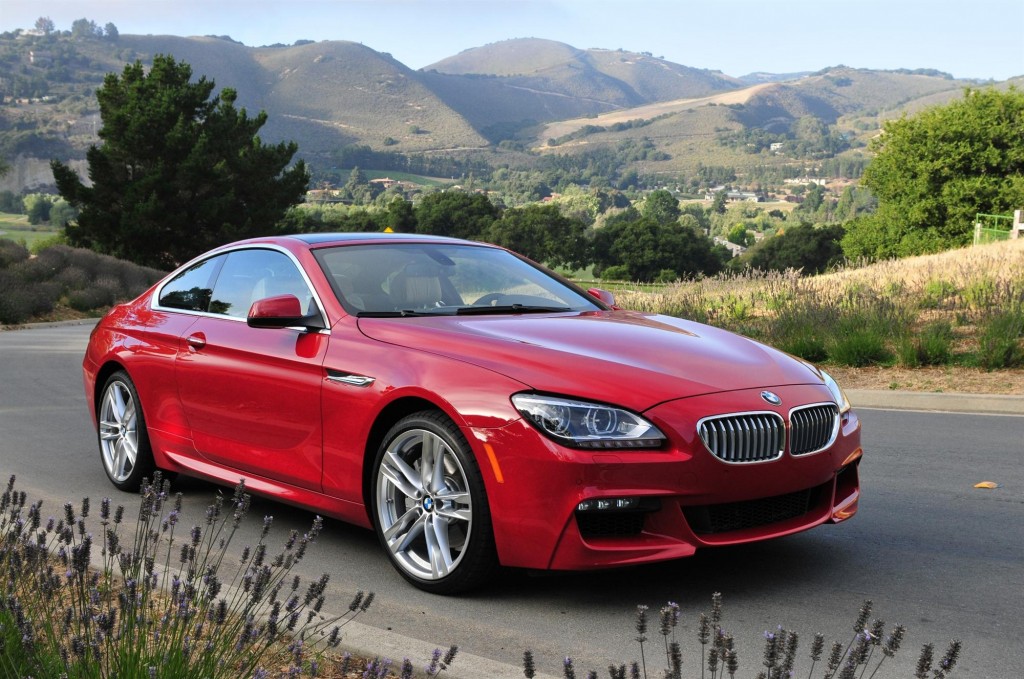 The Pebble Beach Concours d'Elegance is still a fresh, frenetic memory, but I've spent the last two days driving some of BMW's newest hardware up and down California's central coast. Between clipping canyon apexes and whirring along in high-tech quietude, it became clear: the new 6er coupe is about more than just better looks.

Power, of course, is ample. The 400-horsepower, 450-pound-feet of torque twin-turbo 4.4-liter V-8 does its job even more readily and forcefully than in the new Convertible, thanks to its lighter weight--several hundred pounds were saved in the hard top even though the Convertible was designed from the ground-up as its own body-in-white. The adjustable ride and transmission/throttle controls offer four settings ranging from relaxed freeway cruise to sharp-edged corner hustler, but even the sportiest isn't beyond the pale for most in ride quality or harshness.

That balance between sporting capability and ride quality is something BMW, and the new 650i Coupe in particular, does very well in comparison to much of the competition. Four-wheel steering that helps rotate the car at lower speeds and makes it more stable at higher speeds also adds to the 650i's marriage of capability and ease. At the outer limits of sanity on a canyon run, however, even this advanced blend of comfort and pace can't hide the fact that the 2012 650i Coupe isn't the lightest of vehicles (it weighs 4,233 pounds), and the steering lacks some of the feel you'll find in the more sport-focused BMWs. Even so, it's engaging and fun when you want to push it quickly through a canyon, but clearly more in its element in the fast, long, sweeping curves of a more open road. 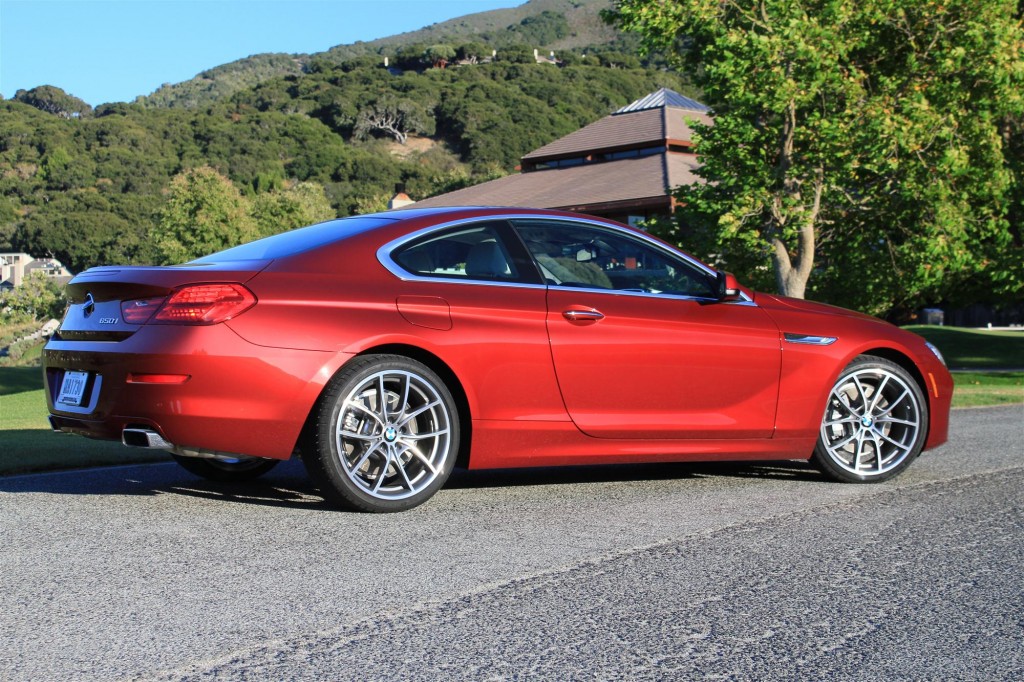 The looks, however, can't be discounted. We weren't really big fans of the last 6er's boat-like tail, and some of the angles from the front were less than pleasing, too. Not so with the 2012 model: walking around it, there's no angle, high or low, that shows an awkward line or an out-of-proportion protuberance. All of the details work, and they all work together to produce a sleek, low-slung, and satisfyingly sporty grand tourer. 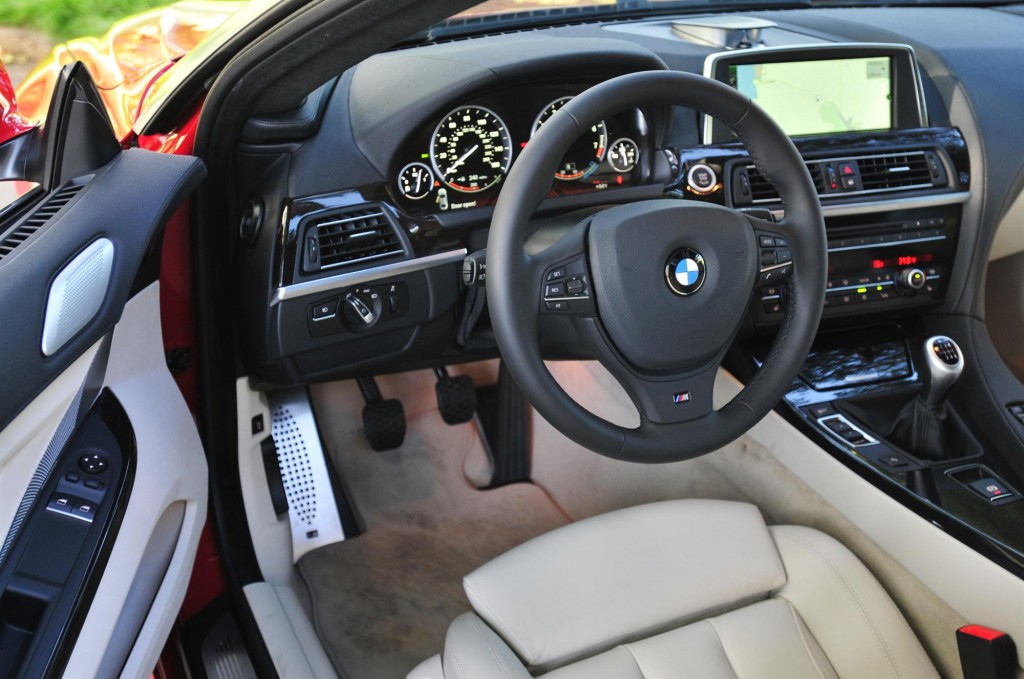 Inside, the new 6-Series is as high-tech and refined as ever. The interior is spacious, comfortable, and clearly laid out for front-seat passengers. The rear seats are serviceable, but probably not a place an adult would want to spend a lot of time. Materials are very good throughout, with soft, durable-seeming leather, fine stitching, and not so many knobs and buttons as to require digging the manual out of the glovebox every other day to control the cabin. The interior look is especially successful when the trim areas are fitted with the classy, understated brushed metal option rather than the more common polished wood. A new Bang & Olufsen audio system provides some high-tech, audiophile-grade entertainment, while adding to the look of the cabin with drilled metal speaker covers.

Beyond the look and feel, BMW has also used the new 650i Coupe to introduce its next step in the BMW Apps lineup, with the MOG subscription music service. The MOG service, which also works through Apple's iPhone and iPad, offers an all-you-can-listen buffet with advanced playlist, channel, and other functionality that's all integrated seamlessly into the iDrive menu system when a subscribed iPhone is plugged into the center console. Whether you sign up for the MOG service or not, it's a great demonstration of what the BMW Apps platform is capable of, and makes us look forward to future Apps add-ons, the next of which should be coming later this year.

With luck, we'll get a chance to take a deeper look at the 2012 650i Coupe soon, to see if the initial gloss wears off or shines even brighter. An all-wheel drive version of the 650i, as well as a turbocharged inline six-cylinder 640i are also coming soon.

At the end of a long day driving through some of the best stretches of the Monterey area and the central coast, we weren't left wanting for much in the overall experience of the 650i; it's a well-rounded, fun, and feature-filled car that does it all so well you're free to do what you should in such a beautiful land: enjoy the drive, your companions, and the freedom of possibility in the open road. 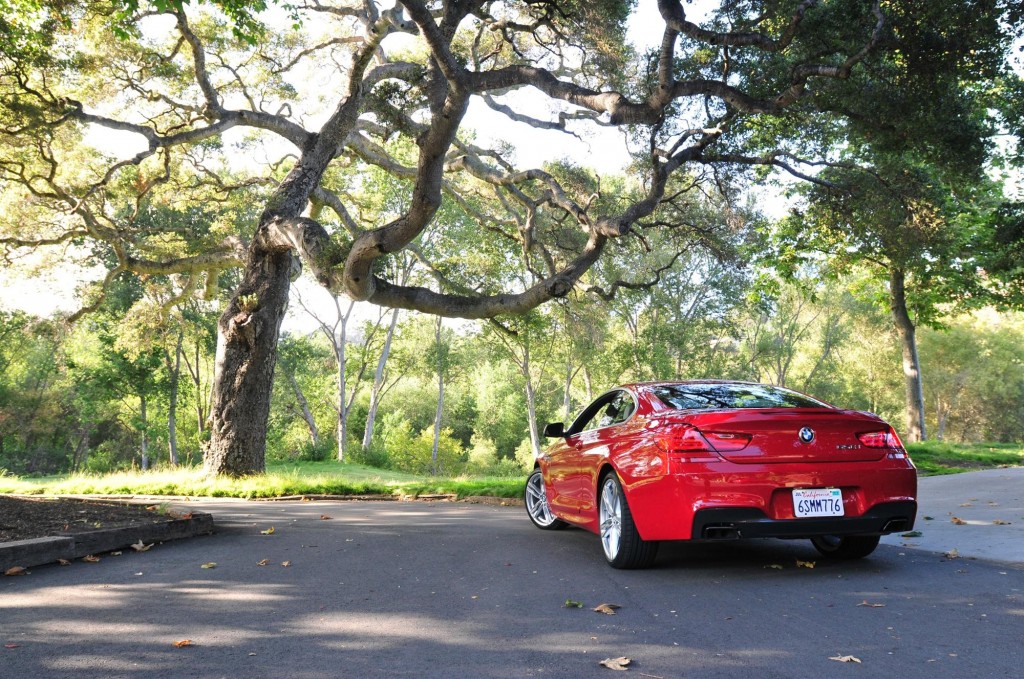