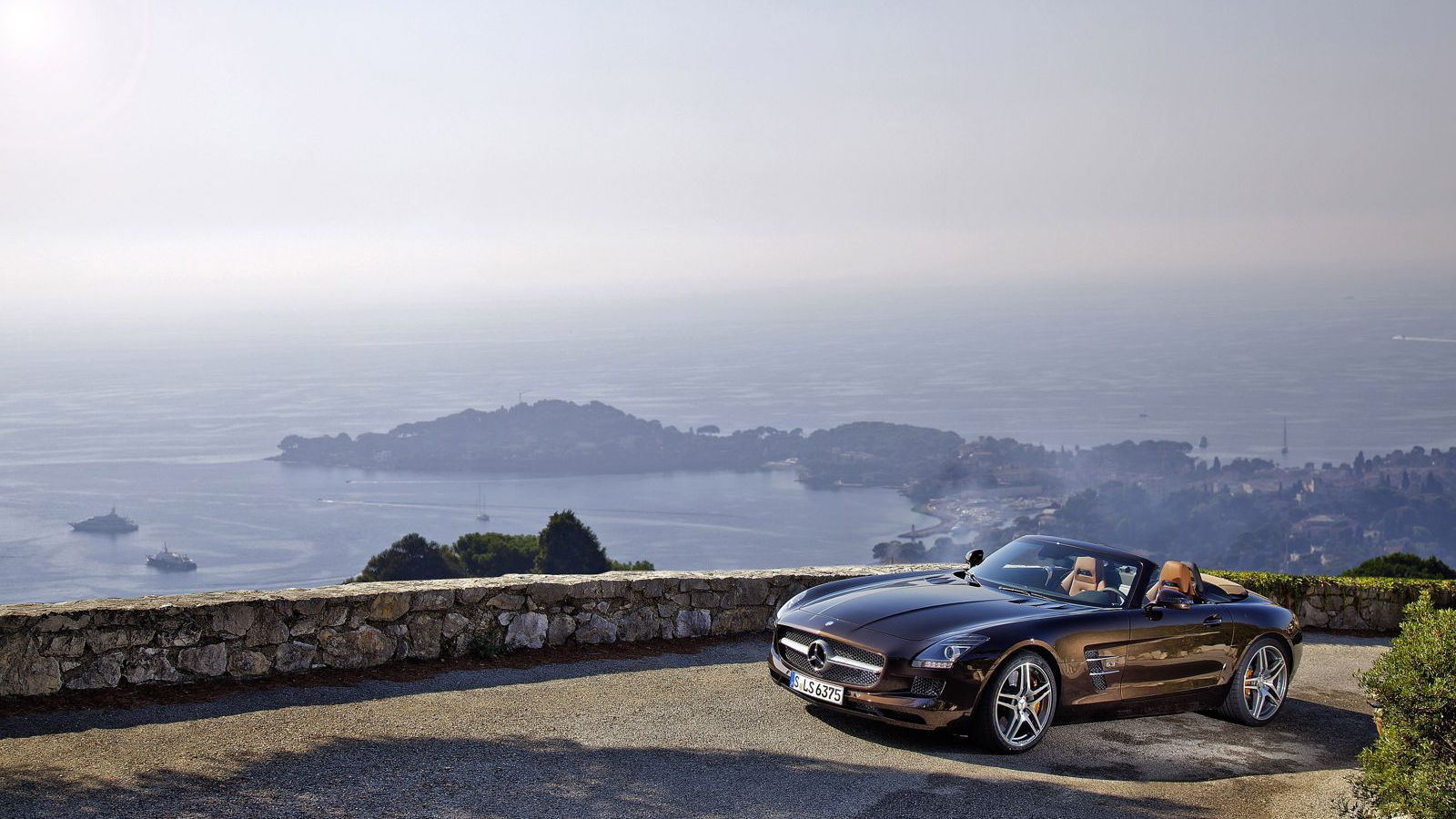 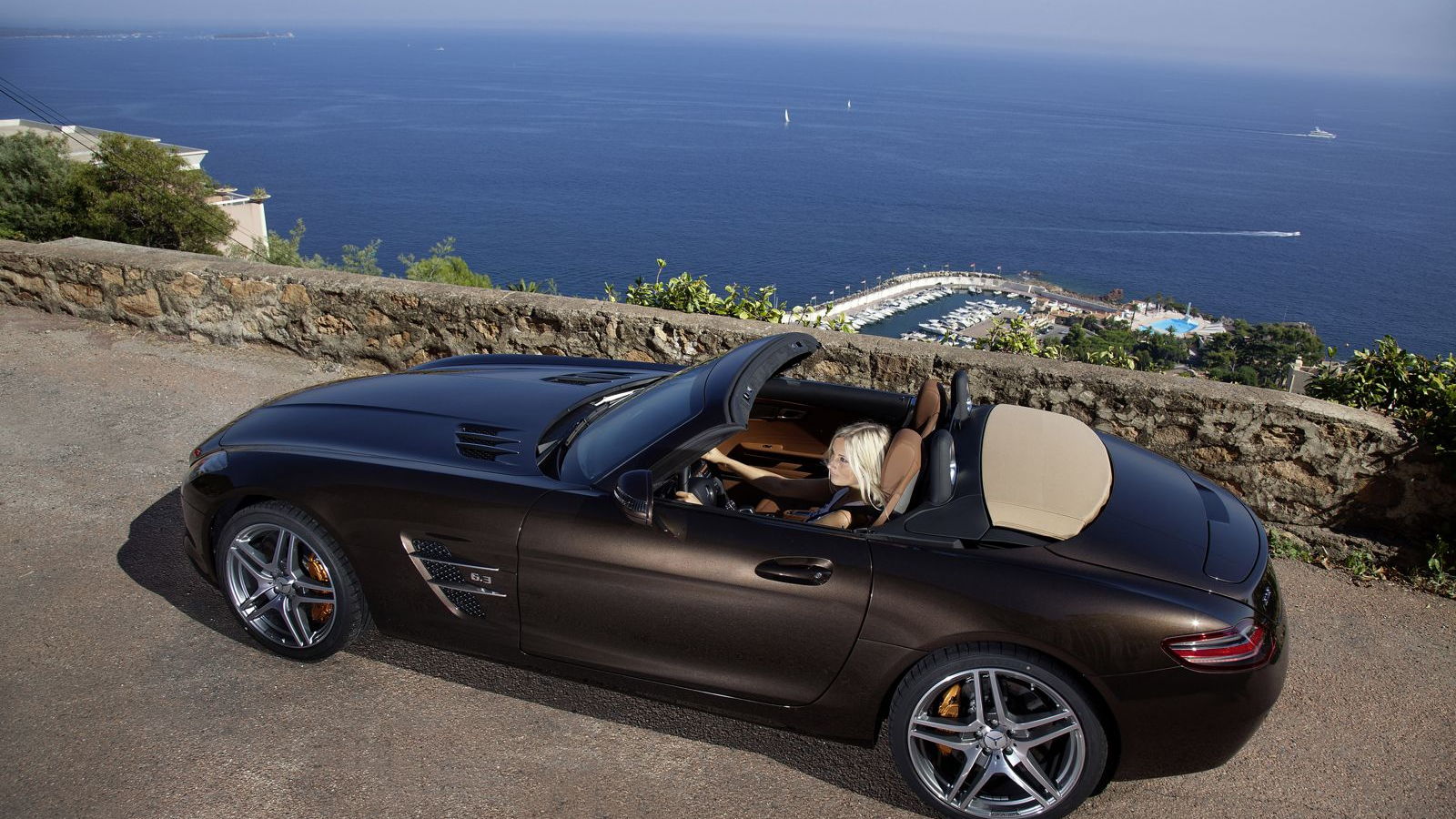 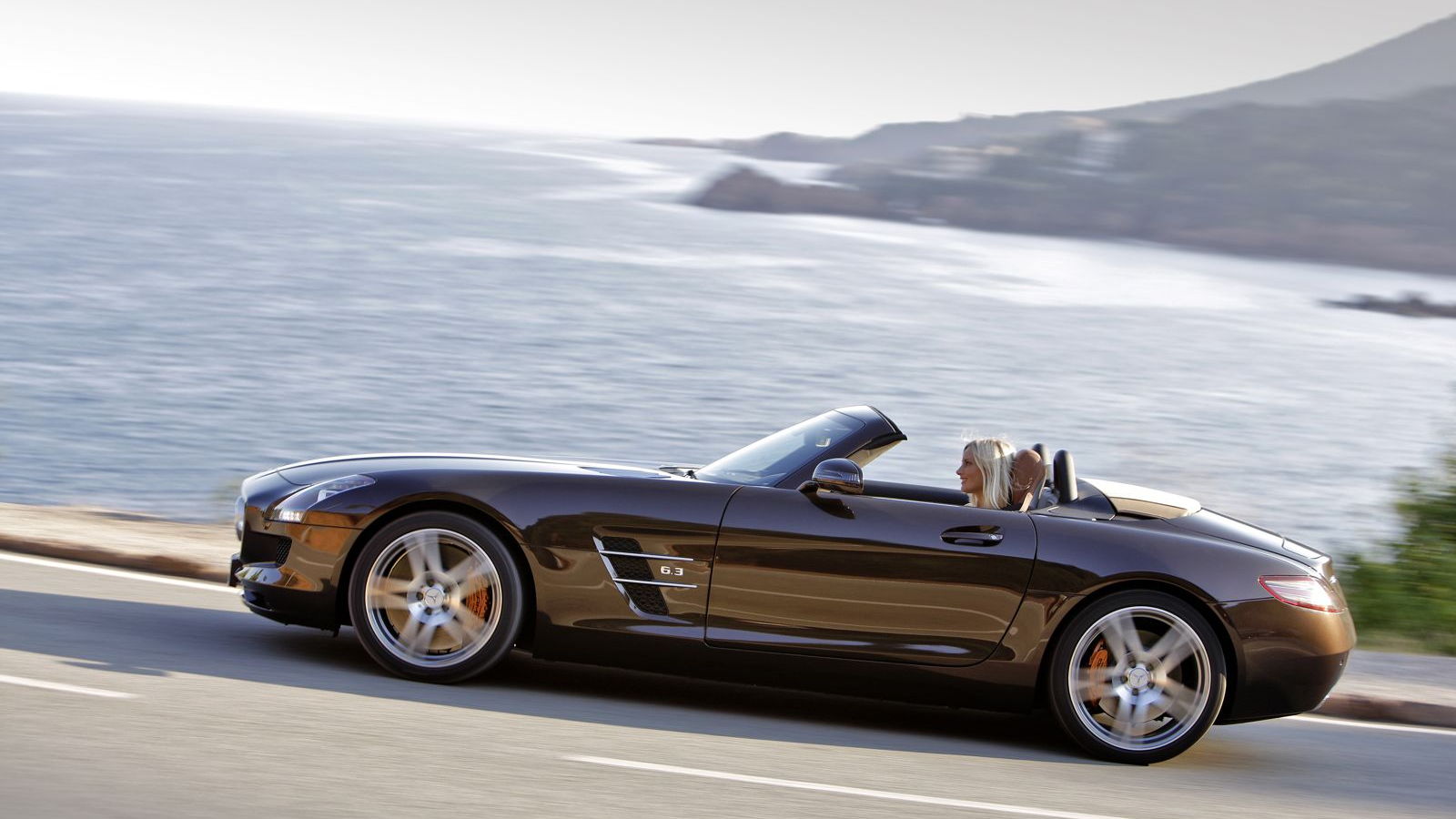 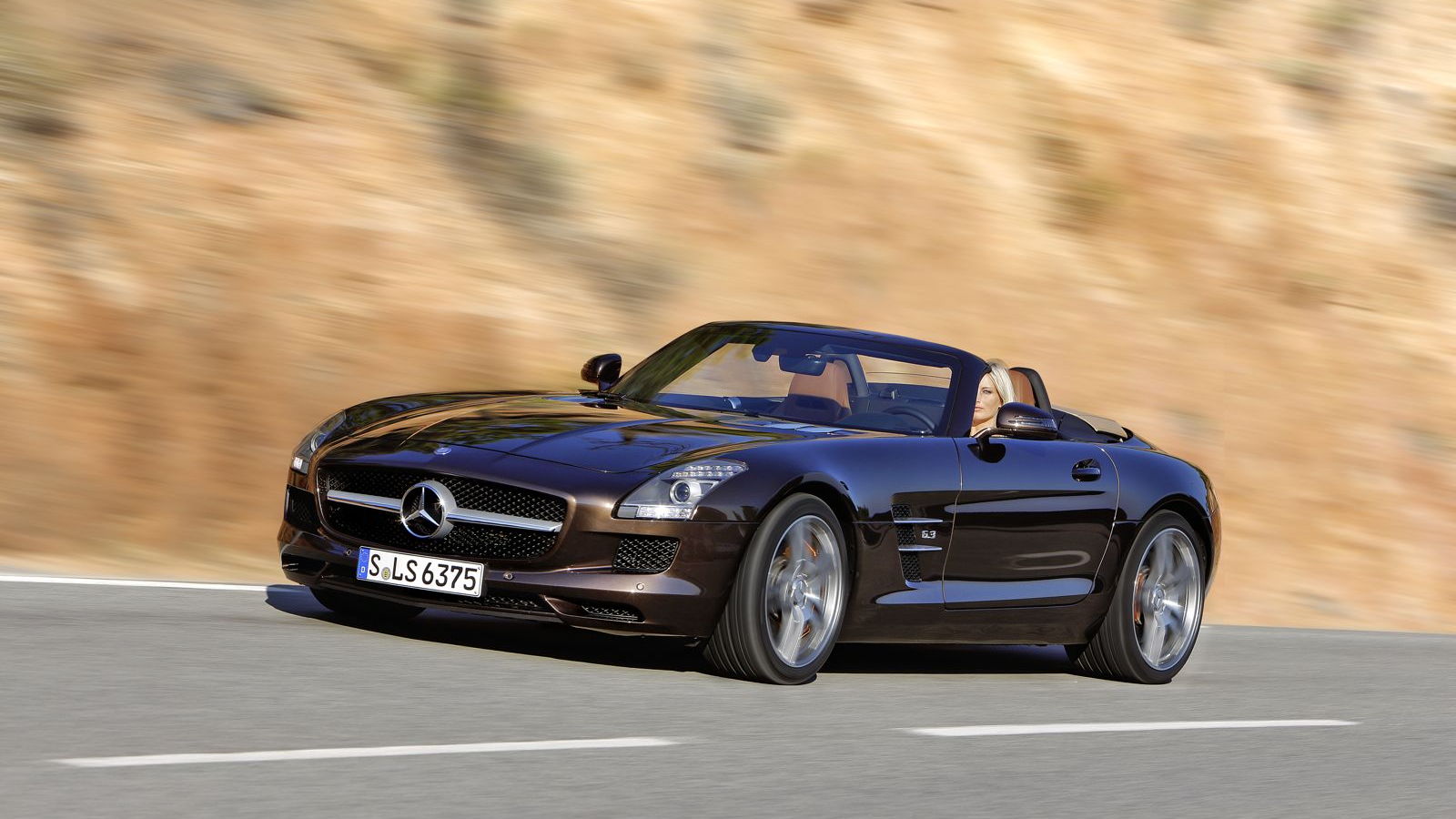 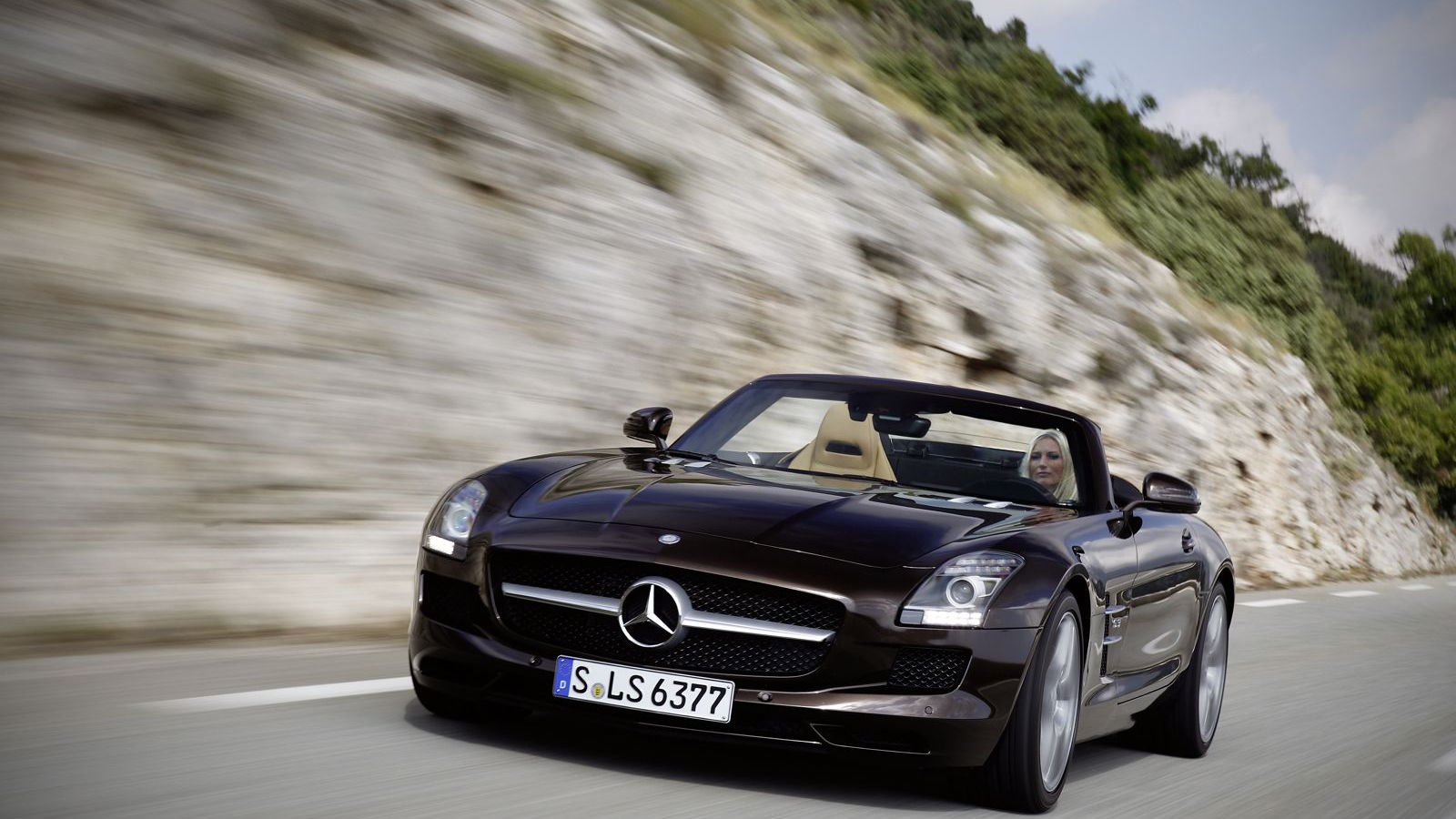 It's been nearly two years since we took you along for a first drive of the Mercedes-Benz SLS AMG gullwing, live from Laguna Seca. We were the first to call it Mercedes' Viper, summing it up thusly: "It's partly American in its tendency to speak out, part Italian in its cool-first aesthetic, and uncharacteristically Mercedes-Benz in its blend of the two."

Ready for round two? While track time suits a coupe, roadsters are built for sin--built to explore the heights of decadence, gluttony and luxury. So we traded the rather prosaic, by comparison, Ritz-Carlton at Half-Moon Bay for the Grand Hotel du Cap Ferrat, and choppered in from Nice (that's in France) to the heliport in Monaco (that's next to France), soaking up some of the heady hydrocarbons put off by a line of $20 million yachts sitting in the next bay over, before strapping on a luscious SLS Roadster and firing it like an arrow into the heart of Provence.

That arresting, incongruous moment stuck with me as we threaded our way through passages as narrow as the ones in Princess Grace Kelly's head that fateful day, on this very hillside, exactly 29 years ago. The same destiny wouldn't befall me, though we'd practically been living on foie gras for three days, and it sure as hell wouldn't wrest the Roadster out of my grip even if it did. At least one of us is too young and too pretty to die today, I thought, and I'll figure out which is which later.

You'd be protective, too, because the SLS Roadster resolves all the visual agita that come with the flaptastic Gullwing's stunt-show doors. It's all party in front, but the gullwing has some business to deal with in the back. Okay, we might have said something like, "The whole sculpturing of the rear deck and the fenders' fall around the taillights is uninspired, and a little plain." Not so the roadster, which has a bit of bullet-nose T-Bird and lots of Silver Arrow in its profile. Removing the roof relieves the SLS of more visual weight than it adds in actual ounces, and that puts all the emphasis on that impossibly long, low nose. The squarish headlamps still aren't jewels, just jewel boxes, but even those taillamps even look good now, their arcs echoed in the curves of the newly sculpted rear fenders.

Put the top up, and it's still a hot piece of action, whether the fabric roof is beige, red, or black. The top rises or folds away in a tick over ten seconds -- you can cycle it up and down at stoplights, fiddle with it at up to 31 miles per hour, and lose only a tenth of a cubic foot of storage space to the gullwing, while netting a much clearer view over the shoulder.

Take the beige roof, and the lovely light brown leather interior bedazzled with real chrome and aluminum, from the drive selector to the tweeter pedestals. Those trims go perfectly with Sepang brown, the hue of the now, a fantastic color that enrobes the SLS in silky tastefulness that your eyes bite into, like a 197-mph Reese's peanut butter Easter egg.

It's the kind of car that concours will covet in 50 or maybe 15 years, ineffably and effortlessly elegant. Graceful, even.

Thrillacious, with LOTS OF SHOUTING

Now that we're past the tinnitus, we think the SLS roadster could be the best car ever to fling through mountain tunnels. We did a lot of that over the course of two half-days, paddle-flicking the AMG dual-clutch gearbox down as deeply into its ratios as we could, making fast friends with the rev limiter, pulling out of the throttle just to hear the Formula 1-style shriek back itself off into wufflicious exhaust-gas overrun, while trying in vain to tap the SLS' 3.8-second 0-60 mph times on straight stretches barely longer than some Morse code.

What fun can be had on a track like Laguna, gets relaxed somewhat on French and Italian roads with unforgiving shoulders and equally unforgiving locals with fingers elongated from years of wagging. Cinquante kilometers! we were warned many, many, many times as we darted through little French knots of towns, quaintly cross-stitched into the semi-arid hills. The SLS only did what we told it to: it dry-sumped its way to 7500 rpm, spitting out 571 horsepower through the seven-speed, chirping out of 15-degree hairpins despite NFL-grade 20-inch rear tires.

Not much has changed, physically, to the drivetrain or the chassis in the modulation from coupe to roadster, but there are a few new things to sniff out amid all the acrid tire leftovers. Some extra bracing to the driveline tunnel and between the rear wheels stiffens the body to resist twisting--and still, it's less than 100 pounds heavier than the gullwing coupe. The suspension's identical, wishbones and track rods all around, with the addition this year of AMG RIDE CONTROL. One of many all-caps tech system from the Mercedes vault of visual assault (the same pricey bin where RACE START launch control and COMAND infotainment controls and the faintly suggestive DRIVE UNIT come from), "ride control" is a set of adjustable shocks that temper the roadster's (and gullwing's) ride quality from Comfort to Sport to Sport Plus, mirroring the settings for the "drive unit," which tailors throttle, steering and transmission settings. There's also an AMG button which zaps you to your preprogrammed favorite settings.

Put it all together, and the SLS Roadster's no less stunning to hurtle around in than the coupe--maybe more so with the 90-mph rush of Alpine air stepped down to a slick trickle by a glass baffle between the roadster's headrests. As tractable as any car we've ever driven, save for the Nissan GT-R and the Porsche 911 Turbo, the SLS Roadster simply explodes off the line, grips laterally like a rubber eraser, and even without the available carbon-ceramic brakes, clamps down on the pavement like a channel cat on one of those hillbilly hand-fishers you see on Animal Planet.

It pays to play around with the RIDE CONTROL and the DRIVE UNIT, and you can keep the tittering to yourselves, thanks. In double-Comfort mode, you'll still need to marshal any manly strength to steer--electric-assisted steering doesn't always mean hyperboosted--but the vertical slack dialed in to the suspension softens it into something a touch more like an SL roadster. Cruising villages in search of maidens fair, we left the shocks in mid-grade Sport mode, to quell the pistoning caused by lots of little speed bumps, all lined up in a row. Tweak both dials up to Sport Plus, and it's absolutely no nonsense allowed: everything's firmly controlled and stiffly ordered, with all the flinch and flex factored out. You're essentially piloting a slingshot at this point, blasting on the throttle at every exit point, gathering it all back in before the next needle-eye pass through vertical cliff walls and vertical drop-offs.

From that high precipice of handling, you can take the very neutral 47:53 weight distribution entirely into your own hands by dialing up Manual mode and turning off the stability control. We'll just be over there refreshing ourselves on the words to "nearer my God to thee" while you handle that, sans guardrails.

Thunderous performance and timeless sex appeal only go so far, you know. Safe to say, it's all unicorn kisses and kitten noses in the SLS Roadster's lavishly outfitted cockpit, too.

We mentioned brown already, right? Let us wax enthusiastic next for AIRSCARF, the venting that pipes warm air around your neck, and for the new Bang & Olufsen sound system, only a shade or two less pure than the Bowers & Wilkins systems in Jaguars and Land Rovers. The tweeters don't rise from the dash like they do in some Audis, but these B&O pieces rest proudly on aluminum pedestals of their own, perfect accoutrements to the chrome and aluminum detailing on the shift lever, door handles, down the console and delicately applied to the flat-bottomed steering wheel itself.

The carbon-fiber trim offered up for the interior and other pieces, even the mirrors, signals some seriousness that the new AMG Performance Media system brings into focus. (Even without all-caps text!) The new system essentially puts a face to your performance driving, translating lateral grip, acceleration, engine data and lap times into an ever-changing display that doubles as the car's navigation system when it's being pressed a little less. In some markets--the U.S., not as likely--the Performance Media system will also bundle in wireless Internet access, turning the SLS Roadster into its own hotspot.

It's not as if it needs the help. The 2012 Mercedes-Benz SLS AMG Roadster's two seats already are a hot spot, if the fickle palates of Monaco's glitterati can be trusted. They may already be over the gullwing's drama-drenched door openings by now--but clearly, they still have a thing for something taut, topless and bronzed. As do we.

The Mercedes-Benz SLS AMG Roadster goes on sale in the fall.