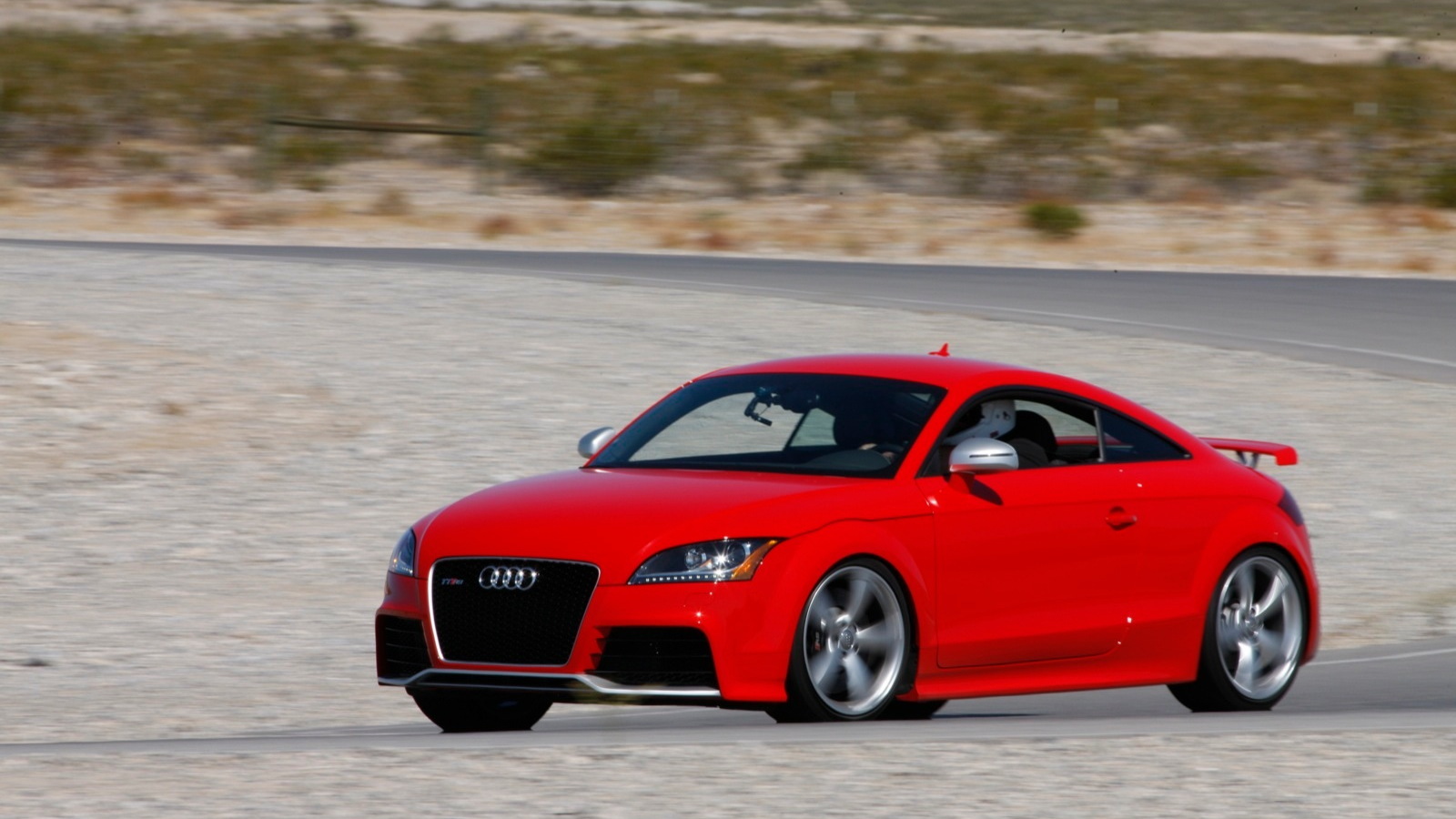 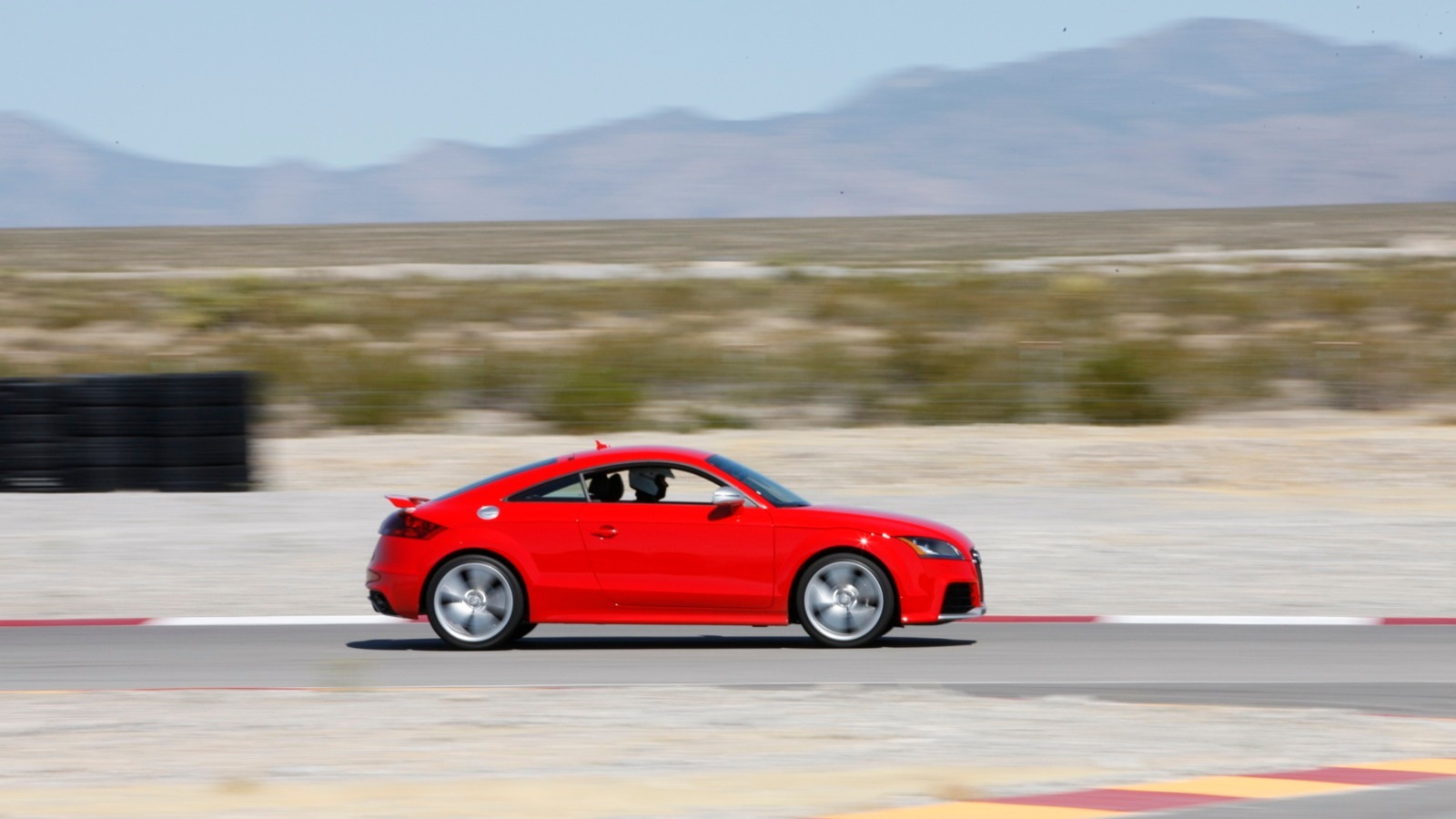 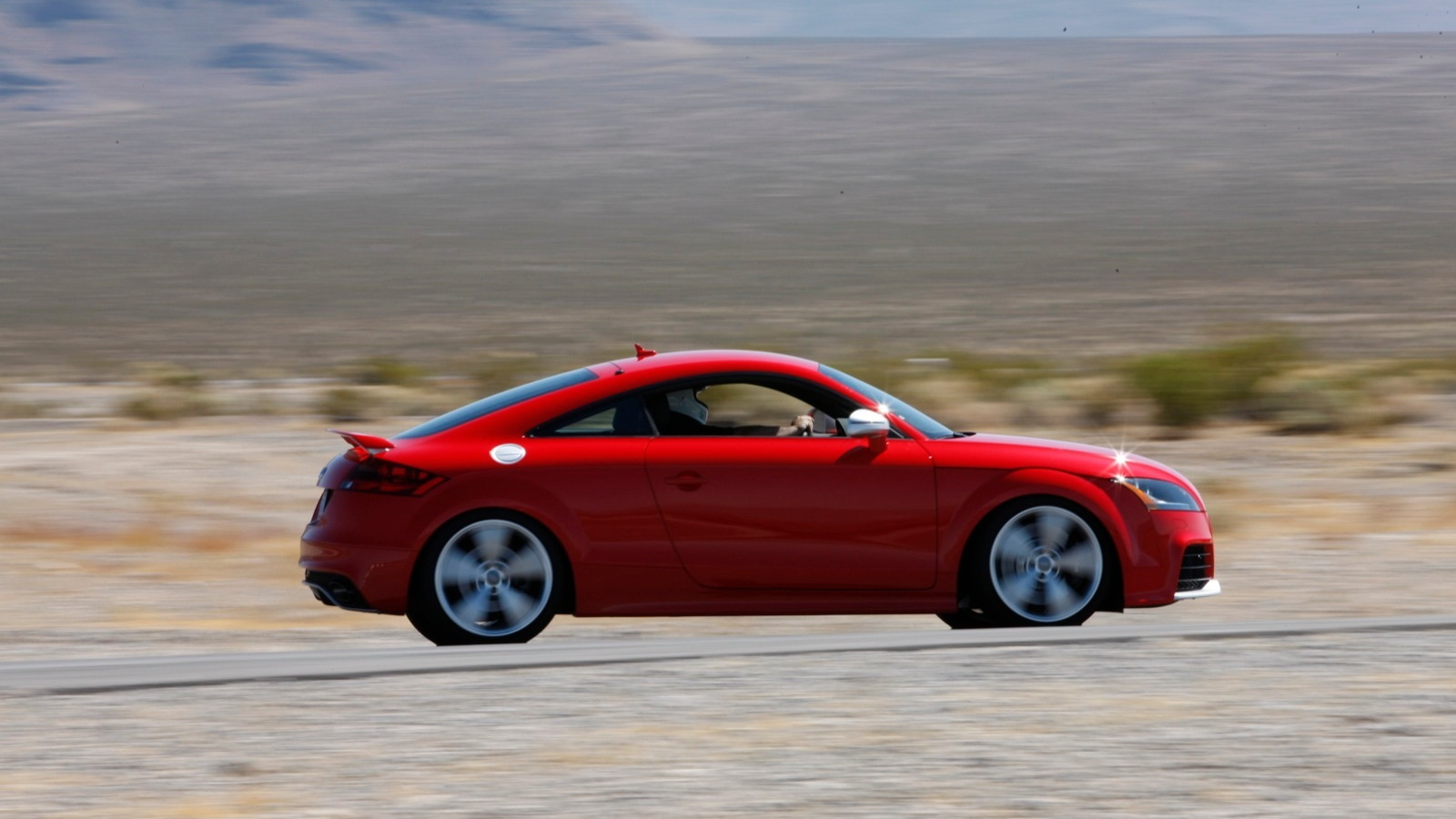 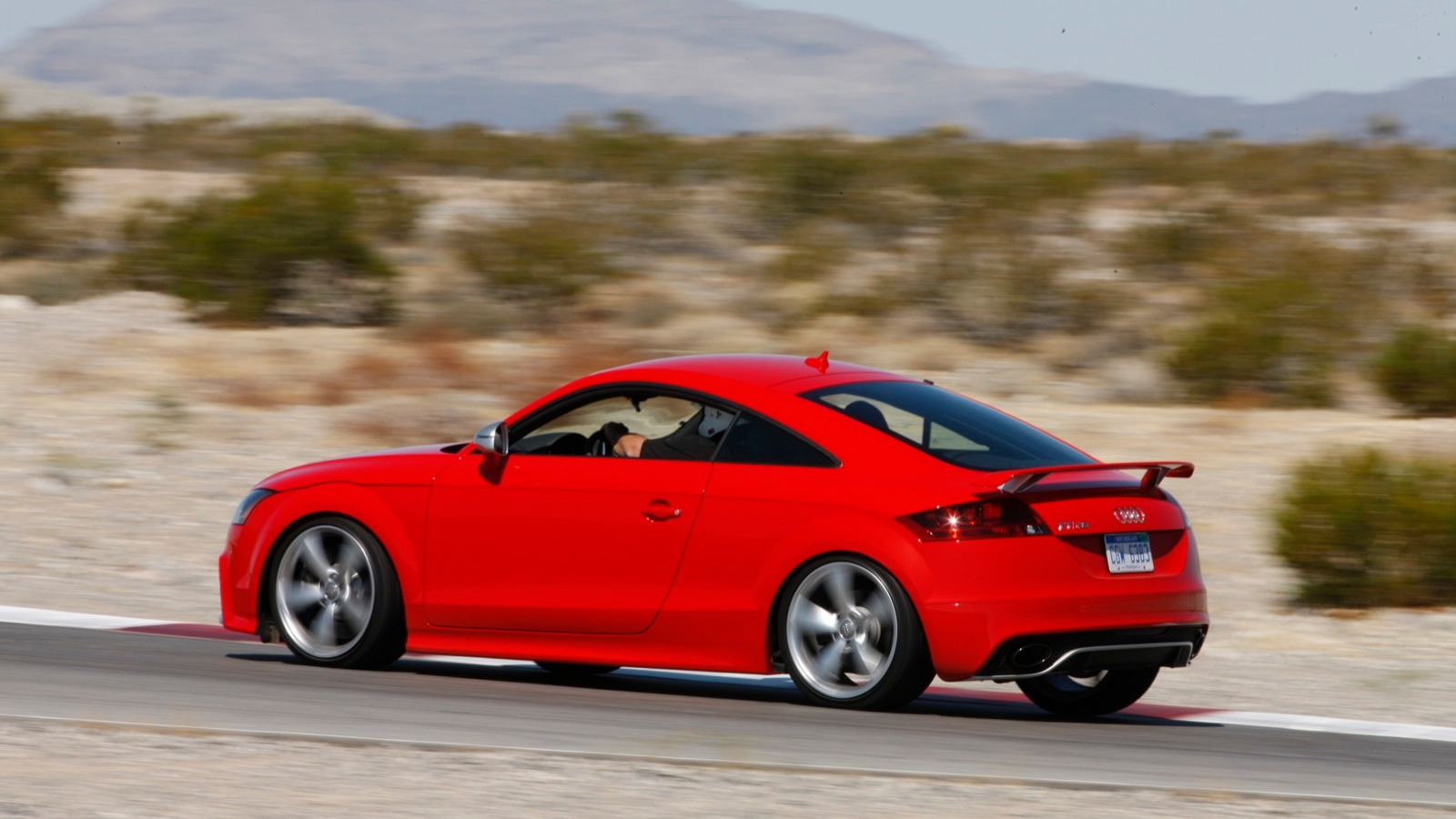 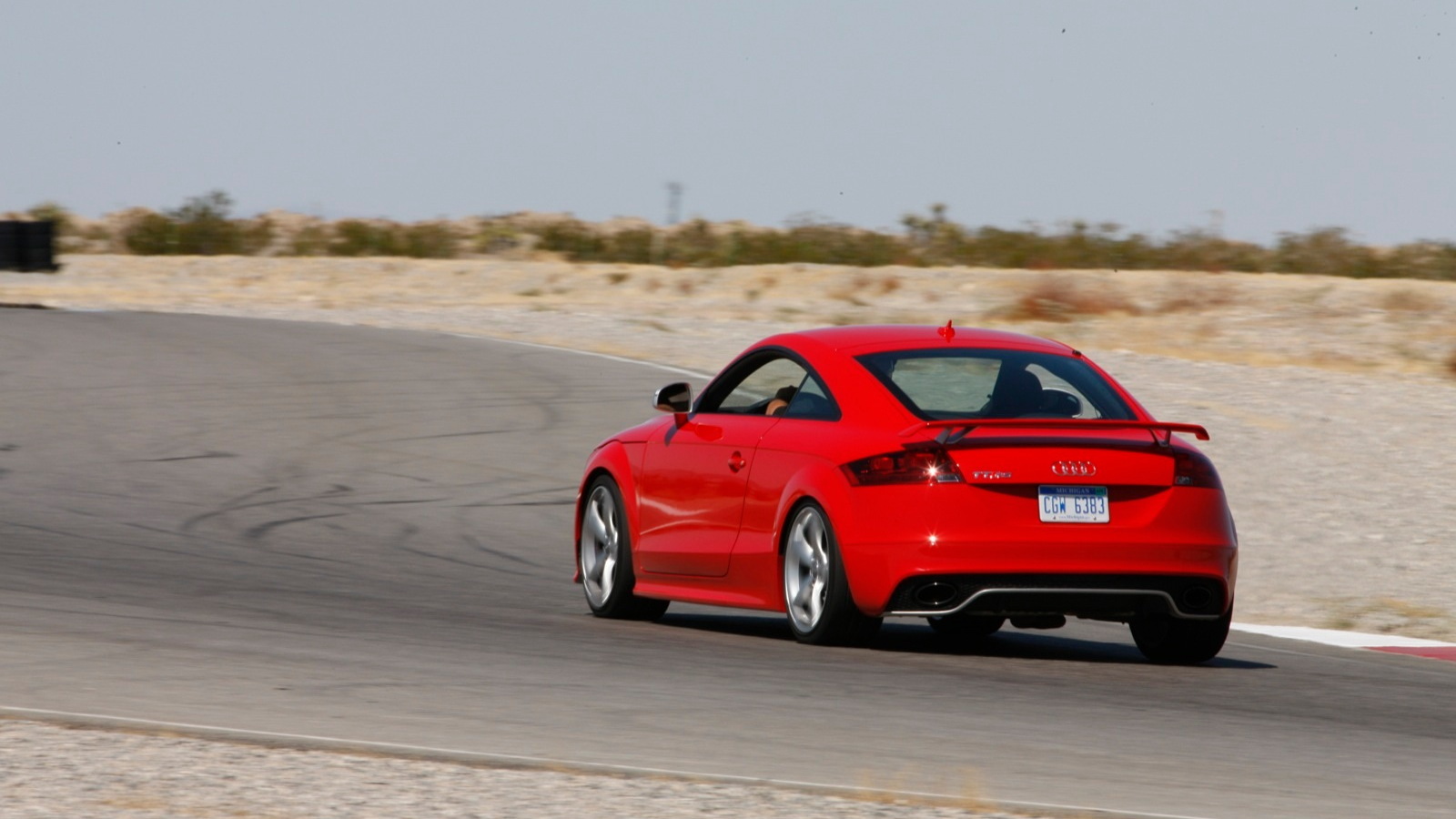 At first look, the 2012 Audi TT RS could be taken as just another chipped, dressed-up TT, with subtle differences that only a true Audiphile would be able to parse out from a distance.

In truth, that’s not at all a bad thing. About 15 minutes into a drive of the new U.S.-spec TT RS, we’d only been puttering along in traffic and managed to blend in pretty well. But when the road opened up and we dropped the hammer, we truly weren’t prepared to be pinned back in our seats with such force. With an engine that revs willingly, low gear ratios to take advantage of it, a hard-to-fluster all-wheel-drive system, and a meaty torque plateau that caps most of the rev range, the RS can leave you a little speechless, delivering the acceleration of an exotic.

Conservative factory numbers from Audi put the TT RS at just 4.1 seconds for the 0-60 mph dash. That’s faster than the V-8 Audi R8, a normally aspirated Porsche 911, or even the screaming new Ford Mustang Boss 302.

Top speed is 174 mph, and Audi also says that the TT RS not only has the fastest acceleration of any vehicle in its competitive set; it’s also the most fuel-efficient, with an EPA Combined 20 mpg.

The secret weapon in the RS is a 2.5-liter, five-cylinder engine that’s turbocharged and direct injected, carrying the TFSI nomenclature and making 360 horsepower and a meaty 343 pound-feet of torque as low as 1,650 rpm.

Below 3,500 rpm, there tends to be a bit of turbo lag while the boost builds to a 17.4-psi frenzy, but above that it’s all business—and it feels like delivers a stronger kick than the V-8 powertrain in the last Audi RS4 (it makes more torque). And that’s all in a (much lighter) 3,300-pound coupe.

Not surprisingly, it’s extremely addictive. We found ourselves again slowing, intentionally, then tapping into all that torque in second or third gear.

To allow us to sample the increased potential of the TT RS without getting thrown in the slammer, Audi set us up with some time at Spring Mountain Motorsports Ranch in Pahrump, Nevada, where the facility’s tightest 1.5-mile road course really helped prove that the TT RS’s fleet-footed driving dynamics go well beyond vast, wide-open straightaways and high-speed sweepers.

First off, we hit the Sport button, which orders up a noticeably stiffer ride from the standard magnetic suspension system; a sharper throttle; and—most noticeably to others in the car, or bystanders—a strident, somewhat crackly exhaust note that sounds part competition rally car, part exotic. That's via a special exhaust gate that lets some of it bypass.

Out on the track, the Audi rips away with that somewhat more raspy, rabid tone, courtesy of the thrummy in-line five layout, and feels remarkably unfussy. The shifter glides to the next gear, the clutch pedal is a bit heavy but takeup is neat, and the quick-ratio steering feels confident on center and loads up nicely around corners. Early on, however, we learn that you can learn more about the tires and tarmac from your seat bottom and gut as you do from the steering wheel—the isolated feel of the steering, even approaching limits, is the TT RS’s greatest turnoff.

Meanwhile, the rest of the TT RS feels vivid and positively eager, with the in-line five ripping up to the high revs for quick downshifts, or back up, like an engine without much flywheel mass. A seven-speed DSG (automated manual) gearbox, that we think might be even better-suited to this engine’s personality, is offered in Europe; we’re only getting the manual.

Despite Audi’s efforts to give its latest version of quattro—including the latest Haldex multi-plate-clutch version in the RS—a rear bias, this is a vehicle that nevertheless still feels nose-heavy and defaults toward safe understeer. Getting the tail out is a stunt, a provocation, not something that’s naturally a part of this car’s dynamics. But it’s no party foul, as we found. The stability control system is quite liberal in its standard setting. Once the tires warmed up and the transition between grip and slip became a little blurrier—and more fun—we found that we could fully enter that transition between mild understeer and what would better be described as a four-wheel drift. It’s all good fun, but hardly the fast way to get around a tight track such as that at Spring Mountain.

Keeping all the nannies on, in Sport mode, I eased my driving back to eight tenths near the end of the track time, letting the stability control provide a very gentle nudge at a couple of key points—and actually felt at my fastest for the day, in conditions where the TT RS felt more like a front driver without a hint of torque steer.

Outside of the massive performance—along with some key feature and appearance additions—the RS isn’t all that different from the rest of the TT lineup. The same aluminum spaceframe construction carries over into the TT RS, suspension geometry is comparable (though the RS rides 10 mm lower), and interior appointments and switchgear are mostly the same.

Seats are excellent, and this 6’-6” driver found headroom to be adequate even with a race helmet. Brakes—upgraded to big four-piston units in front—are confidence inspiring, and only after dozens of laps, in 104-degree Nevada heat, increasingly pushing the brake and stability-control boundaries, did we finally notice a substantial change in pedal feel.

For an entry price of less than $60k, the TT RS includes all the comforts and features you’d expect—including Bluetooth and automatic climate control—and it adds a lap timer, power sport seats covered in a choice of Silk Nappa leather or Alcantara, and a host of special trims and showy wheel possibilities. Exterior colors are limited to eight different shades of black, grey, silver, red, white, and blue, with three different wheel finishes.

Order up a Tech Package, and you’ll get Audi’s MMI Navigation, upgraded Bose sound, rear parking sensors, adaptive headlights, and ambient LED lighting. Separately, heated seats, carbon-fiber folding mirrors, ‘aluminum optic’ exterior trim, a sport exhaust, and gloss-black wheels are among the standalone options. You can also opt to delete the larger rear wing and instead get the power-retractable spoiler that’s offered on the rest of the TT line.

Probably not a daily driver

Before you ante up, just be aware that this might not be the sort of vehicle you should buy as a daily driver, or as a vehicle that you intend to use to cover vast distances. Although the magnetic ride control system makes the ride tolerable and not nearly as busy as you might expect given the TT RS’s high-performance nature, the RS’s cabin hums with road coarseness—on expressways especially—and lets you know vocally of every little irregularity, even if you don’t feel it. And on that matter, we recommend the Bose premium sound, as the unimpressive sound coming from the base sound system barely passes muster.

Bottom line: If you like tail-out driving and glorious four-wheel drifts, then by all means get that Mustang Boss, M3, or older Porsche 911. But a certain type of enthusiast will love how surefooted, all-around athletic, and stunningly quick the TT RS feels. We’re among them.