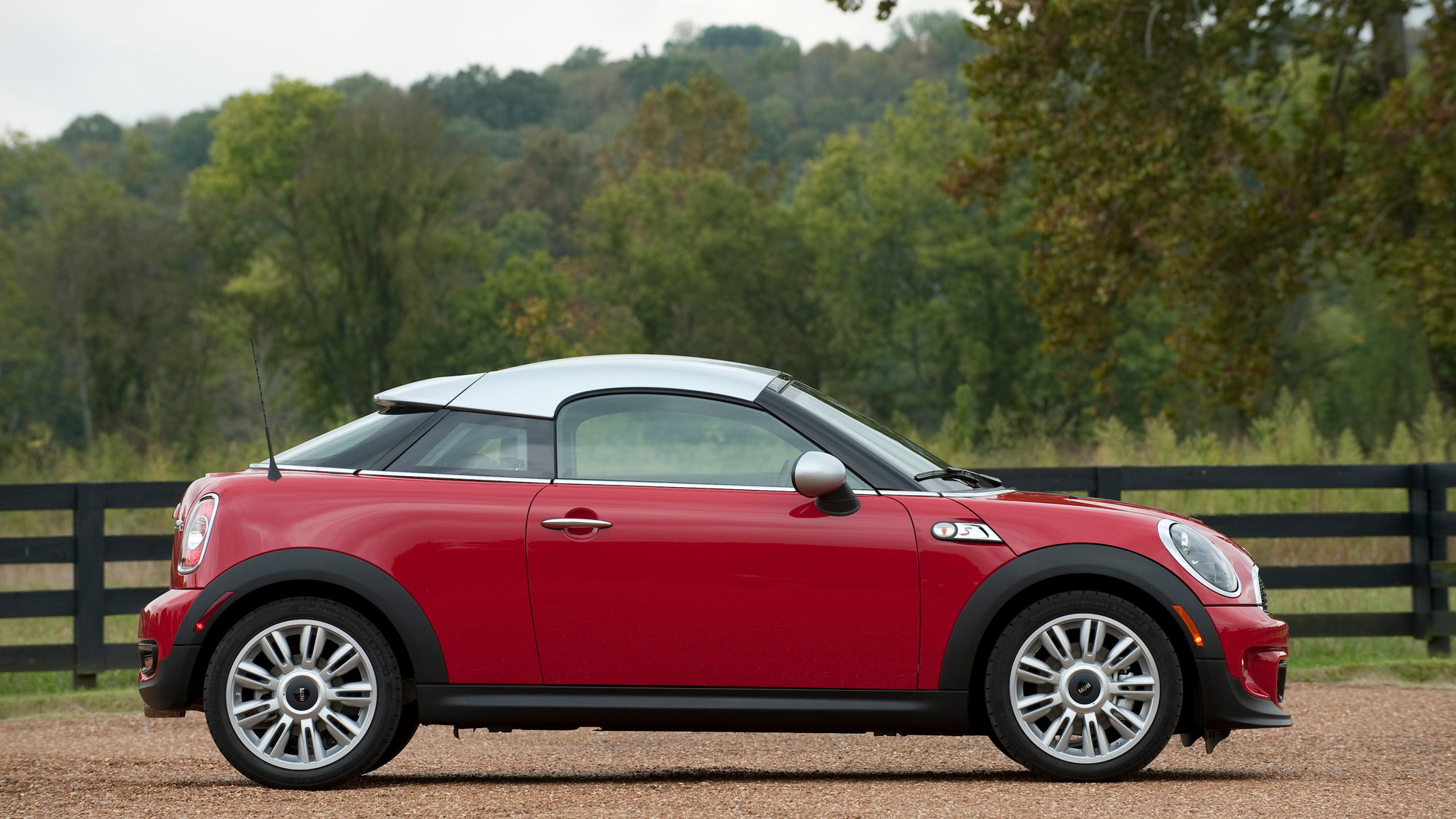 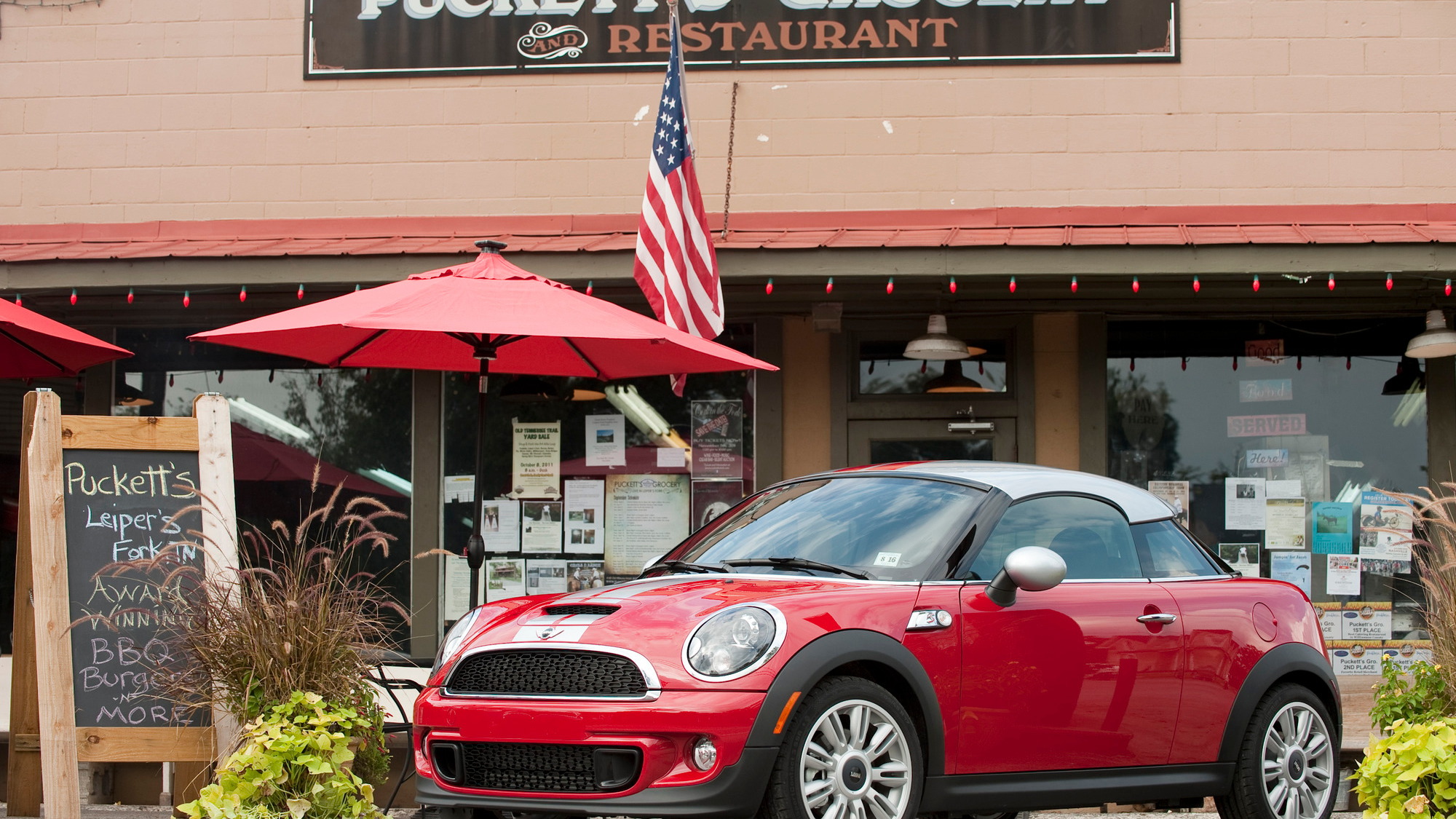 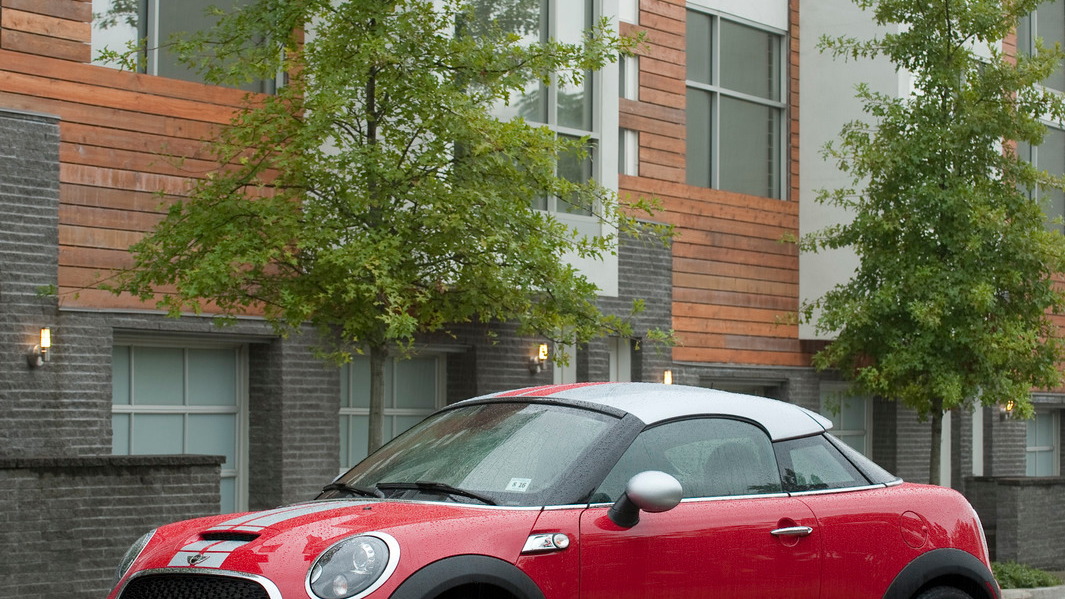 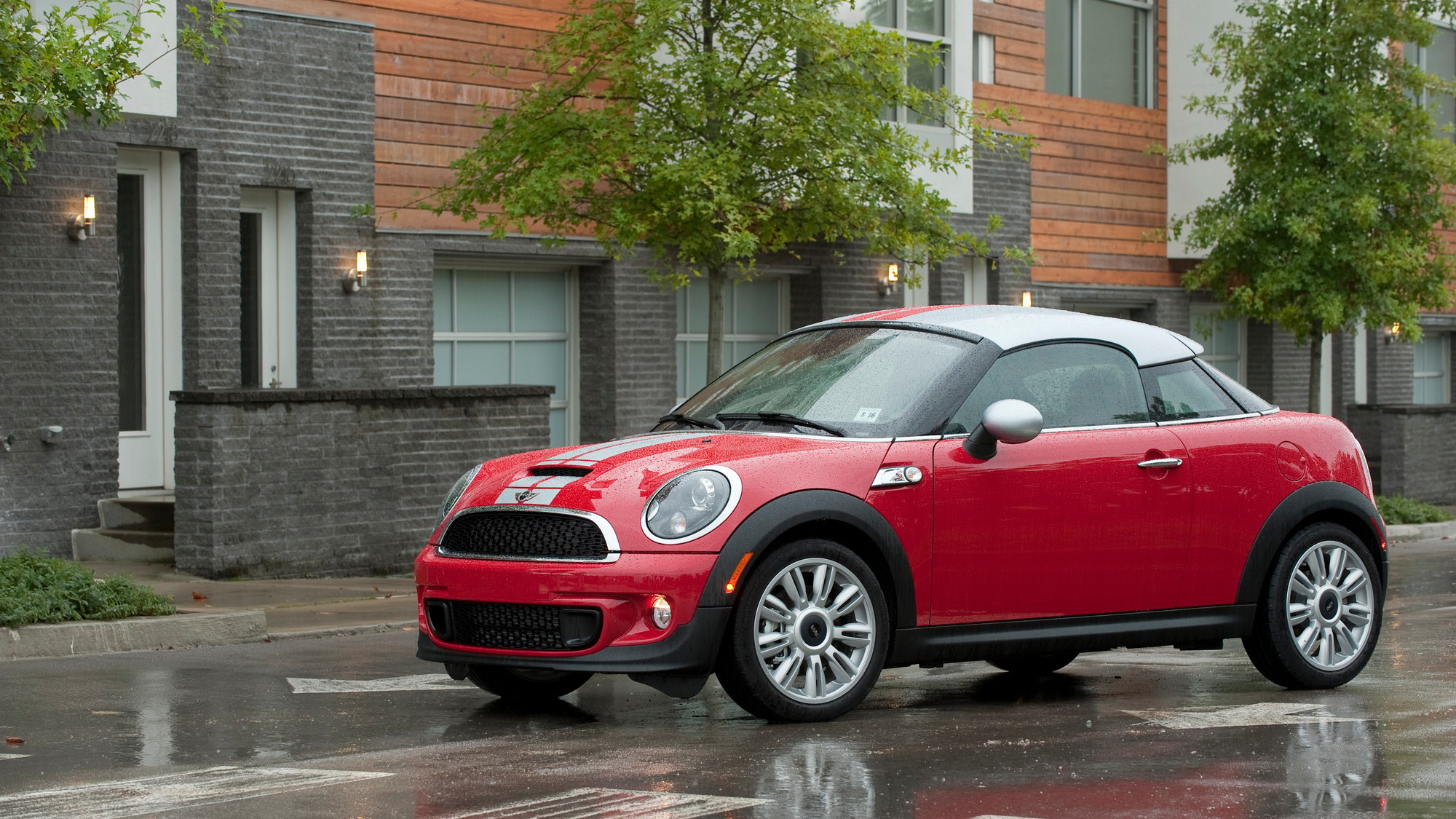 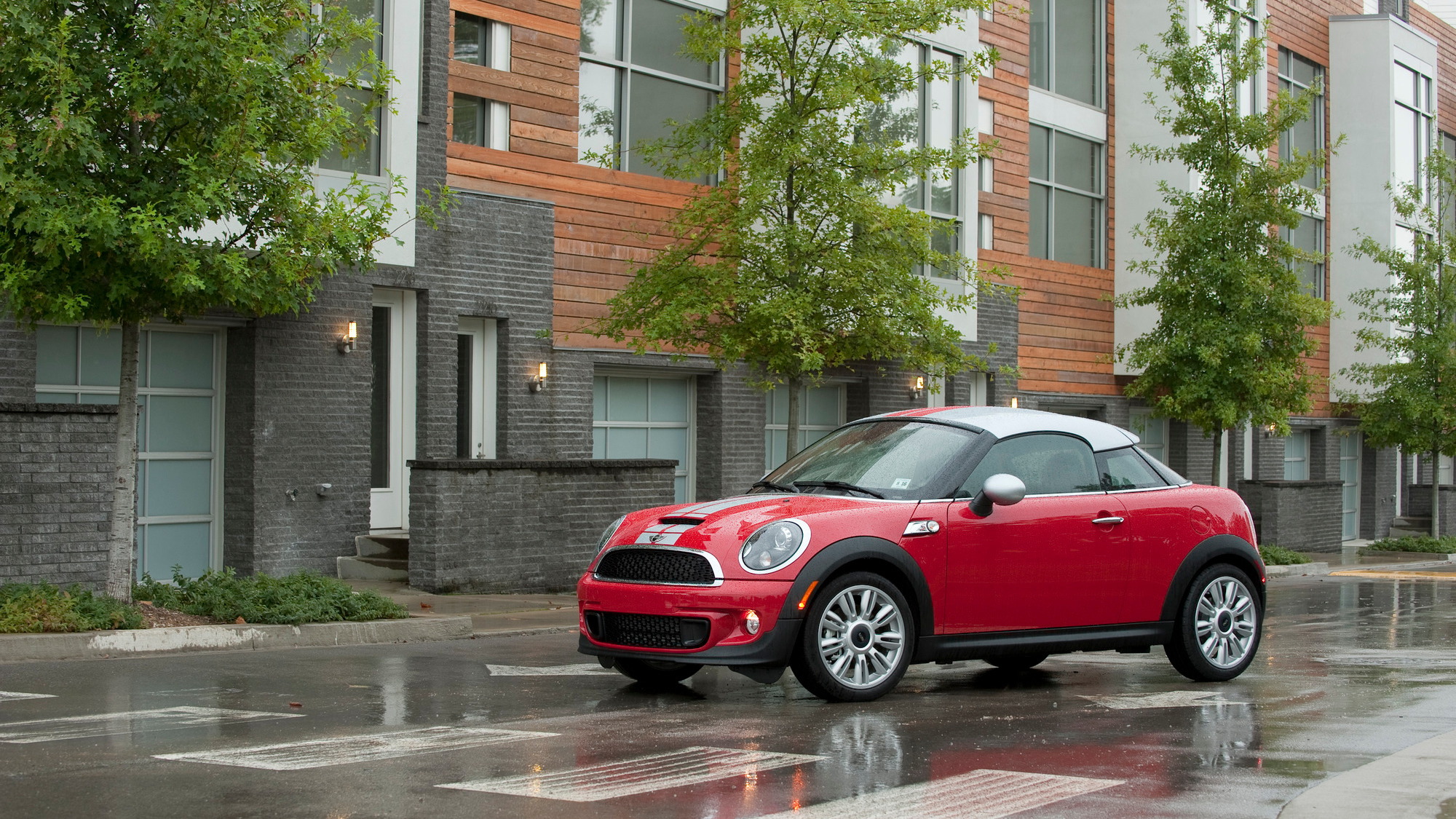 There are at least two ways to look at the arrival of the 2012 MINI Cooper Coupe: "Yay! Another MINI to love!"; and, "Another MINI? Why?" Whichever camp you fall into, the MINI Coupe shouldn't be called just another MINI, despite the fact that it very much is.

Before we can make sense of that statement, we'll need to make a quick check of the facts: the 2012 Coupe is powered by the same engines (a 1.6-liter four-cylinder, and two turbocharged variants), is offered in the same trims (Cooper, Cooper S, and John Cooper Works), and has a nearly identical slate of infinitely variable customization options for its roof, stripe, wheel, vinyl, and interior packages. It also adds MINI Connected to the mix, tapping its technological liaison at BMW for Apps functionality like the MOG music subscription service and may more. In other words, it's at least as MINI as any other MINI, despite being even more mini in a way that makes it a very different MINI.

Huh? It's OK to be confused. The MINI Coupe, at first glance, looks much like any other (new) MINI you've ever seen: a cute, friendly face, large round headlights, a short hood, small exterior dimensions, and a slab-sided nod to the brand's past. But once you look past the similarities, things diverge quickly.

There's no square back, for instance, to complete the classic two-box design of the Cooper hatchback, Clubman, or Countryman. Nor is there a true three-box design, however much MINI might say there is; instead there's a sharply sloping rear hatch that meets a very stubby decklid that almost immediately disappears into the bluff rear. Speaking of sharp slopes, looking back to the front of the car, you'll notice a much more heavily-raked windshield.

The combination of these elements around the greenhouse are what earns the MINI Coupe its name, and they're also what move it well outside usual MINI territory. Why? Because they're aggressive. Topping the aggression of the sharp slopes is a spoiler that grabs air and flushes it down the almost-flat rear window to keep it clean, and, on equipped models, usher yet more air over the active rear spoiler. MINI calls the whole roof shebang a "helmet." It also seems rather proud of the word and the design, so we wouldn't be surprised to see both the style and the terminology move to other models in the lineup, perhaps first with the soon-to-be-produced Paceman.

An active rear spoiler is itself another aggressive mark: raising once you've passed 50 mph and receding again below 37 mph, the spoiler's upward movement drops a hint to nearby motorists that there may be something more than MINI-branded sunshine hiding within the little Coupe.

In John Cooper Works trim (where we spent most of our day-and-a-half with the car), the Coupe lives up to this new-found aggression with verve. Pin the throttle and after a fairly short delay to spin up the turbo, you'll soon be accelerating toward whatever's framed in your windshield with surprising, if not break-neck, speed. The MINI Coupe claims a 6.1-second 0-60 mph time in JCW trim, making the quickest MINI to date. It can carry on to 149 mph, making it the fastest MINI yet, too. So, if you're looking for the hottest of MINI's range, look no further.

But what about handling? Has the transition to the Mighty Helmet and a dash of aggro costumery done anything to futz with MINI's well-deserved rep for front-wheel-drive prowess? Of course not. If anything, this is the best MINI I've driven, and I've driven them all--except the Countryman--to submission in numerous autocross and road course settings.

The Coupe, perhaps owing to its slightly better rearward weight distribution (an artifact of its more complex rearward construction), is more ready to provide the initial rotation you need as you enter a corner at speed. It also maintains this yaw angle with ease, never feeling like it's about to spin around and carom off into the weeds, cones or walls, even with all of the electronic nannies fully disengaged. Perhaps best of all, it may well be the most difficult front-drive car to ham-fist into "terminal understeer," a term bandied about too readily by many car writers, but nonetheless a real thing. Except in the case of very sophisticated, highly tuned, and largely unstreetable racing applications, once a front-wheel drive car transfers enough weight to its outside front tire in a turn to lift the inside rear wheel, it's very hard to prevent the car's trajectory from devolving into an ever-wider, often pavement-departing, arc.

The MINI Coupe stolidly refuses to do this, even when deliberately provoked. It will, in response to truly wild and belligerent gesticulations by the driver, eventually enter a state very near to terminal understeer, but even then, a suitable application or removal of throttle can shift enough weight rearward to re-seat the floating corner and return handling back to more predictable zones.

The MINI Coupe is, simply, very fun to drive.

You might notice I didn't append any qualifiers on that declaration of fun; no hanging "for a front-driver," nor a dangling "as far as hot hatches go,"--not even a passive-aggresive, "for a car under 300 horsepower." That's because it needs none. The fun of rear-drive, 300-700-horsepower, properly pedigreed coupes is no secret. Nor should the fun of a well-engineered, properly-tuned, and eminently balanced little MINI be one, either, any more than it should require a shameful appendage on a declaration of genuine enjoyment.

There is, of course, a whole lot more to know and learn about the 2012 MINI Coupe, but I only spent a handful of active hours with it over the course of a 36-hour whirlwind trip. I could tell you that it readily adapts to rain and fog; that plaid-wrapped Appalachian bluegrass string bands jar against its primary hues; and that despite being the MINI-est MINI of them all, ours readily gobbled up well over 12 feet and 400 pounds of overfed automotive writers--plus their gear--before asking for dessert. But the details will have to wait until I've spent a full week or more in the car.

Tempering my enjoyment of the car in the shorter term, however, were a handful of oddities that are largely common to the MINI line, and one that isn't.

The common things--switch locations, the lack of a touchscreen interface on a device that has been, quite literally, made the center of attention for anyone within the car, and the similarly ludicrous ergonomics of controlling it or nearly anything inside the car--can probably be dispensed with if you're a MINI acolyte. They can even be learned to be lived with, I'm assured by my MINI-convert friends, and I'm open to that idea.

But the one thing that's unique to the Coupe, and which, in many eyes, may be its most redeeming--nay, attractive--characteristic is the one thing that Clockwork Oranges my Malcolm McDowell eyes open and makes me wonder over what horrors I've done in my past to deserve the display presently in front of me: the Helmet. But not only the Helmet; also the line where the Helmet bends down, presumably over the Coupe's ears, as a helmet would, to protect those most essential but awkwardly exposed devices, just aft of the passenger window. There it meets with the C-pillar, a miscegenation of innumerable geometric entities, bisected with injection-molded joint lines, obscuring a curious hollow-pillar scaffold behind its glassy shell.

This little section of the car, which allows the rest of the Helmet roof to look, at a glance, as if it depends from nothing but the peak of the devilishly slanted A-pillar, is a sort of psychological black hole. Once my mind is sucked into this area of the Coupe's design, I can't get out, and my thoughts can't travel quickly enough to get back out to others to warn them of the event horizon. Nor can others' thoughts get in to warn, or possibly help, me as my consciousness is spaghettified into nothingness by the immense pull of this singularly inexplicable design decision.

Don't panic! As many of my colleagues assure me, a simple preventive exists: simply order your car with a black roof. It minimizes the contrasts likely to initiate any design-gravity warp, and has so far worked well for me, having restricted myself to viewing the 2012 MINI Coupe only in such configurations.

Disclaimer: MINI flew me, in a roundabout fashion, to Nashville, where it plied me with the opportunity to purchase very expensive denim wear out of my own pocket, a meal fit for a royal family, and a night's stay in the most comfortable, well-furnished shoe box I've ever had the pleasure to find, in order to allow me to drive the 2012 MINI Coupe so that I might relay to you my impressions.