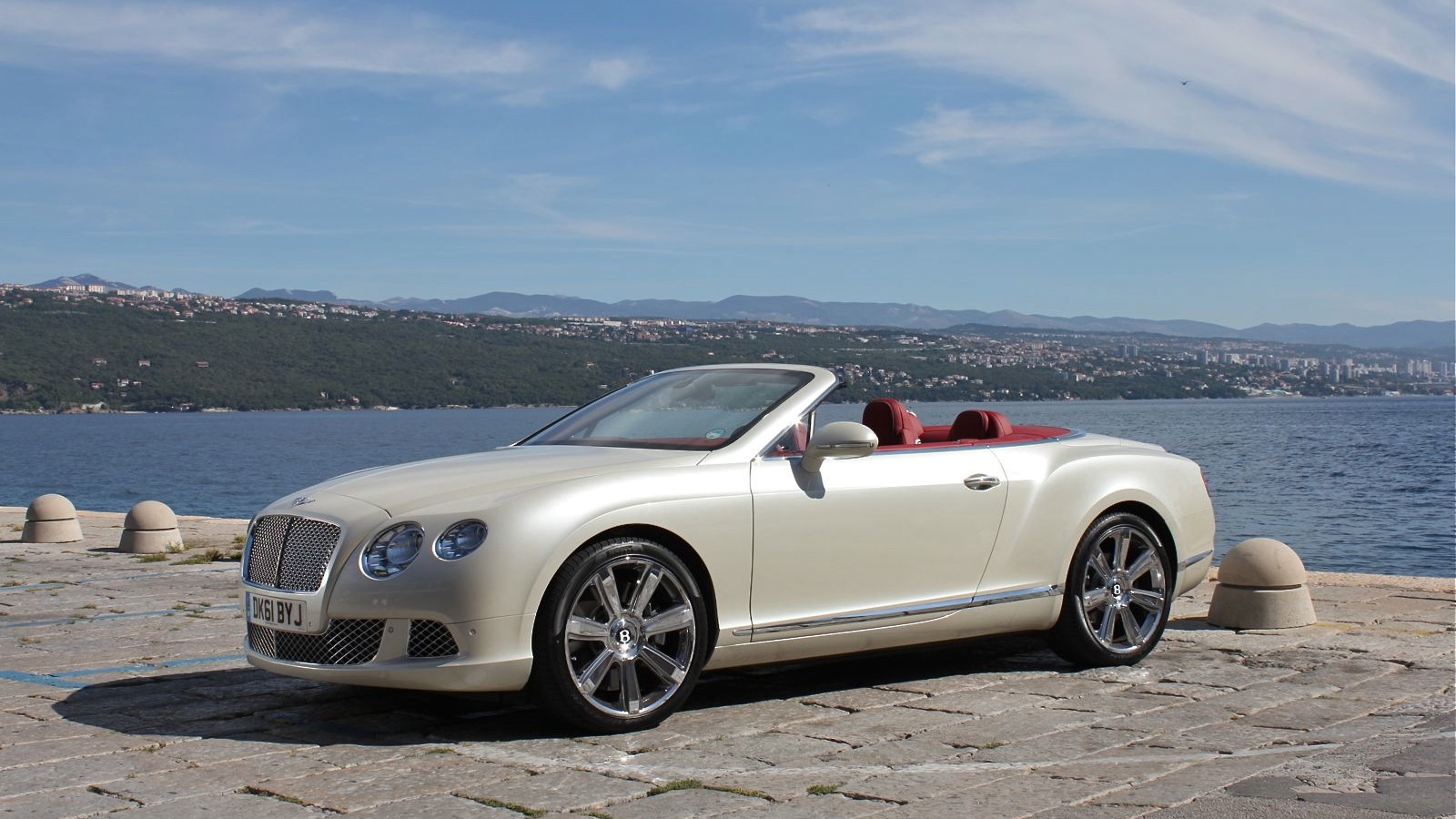 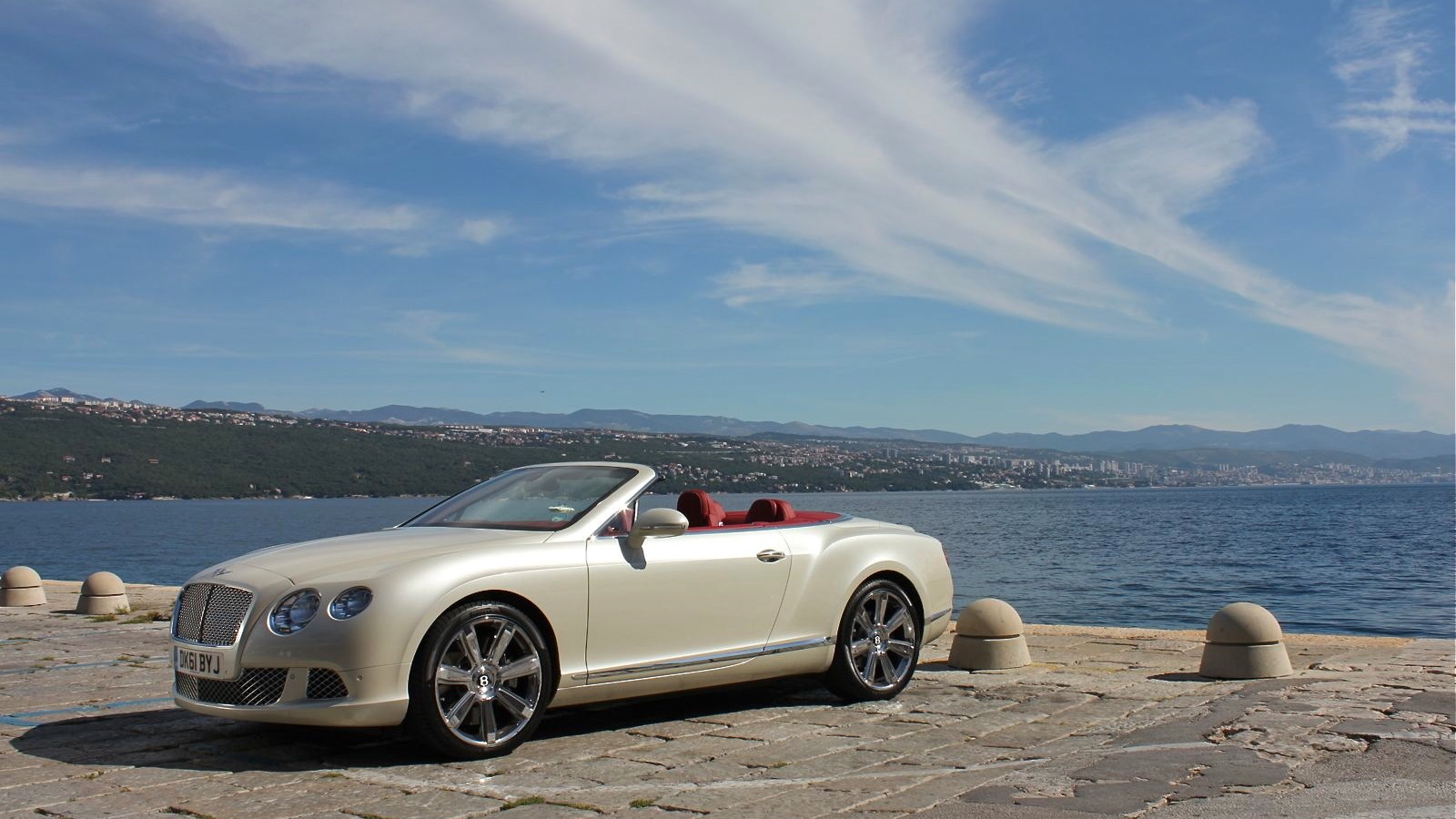 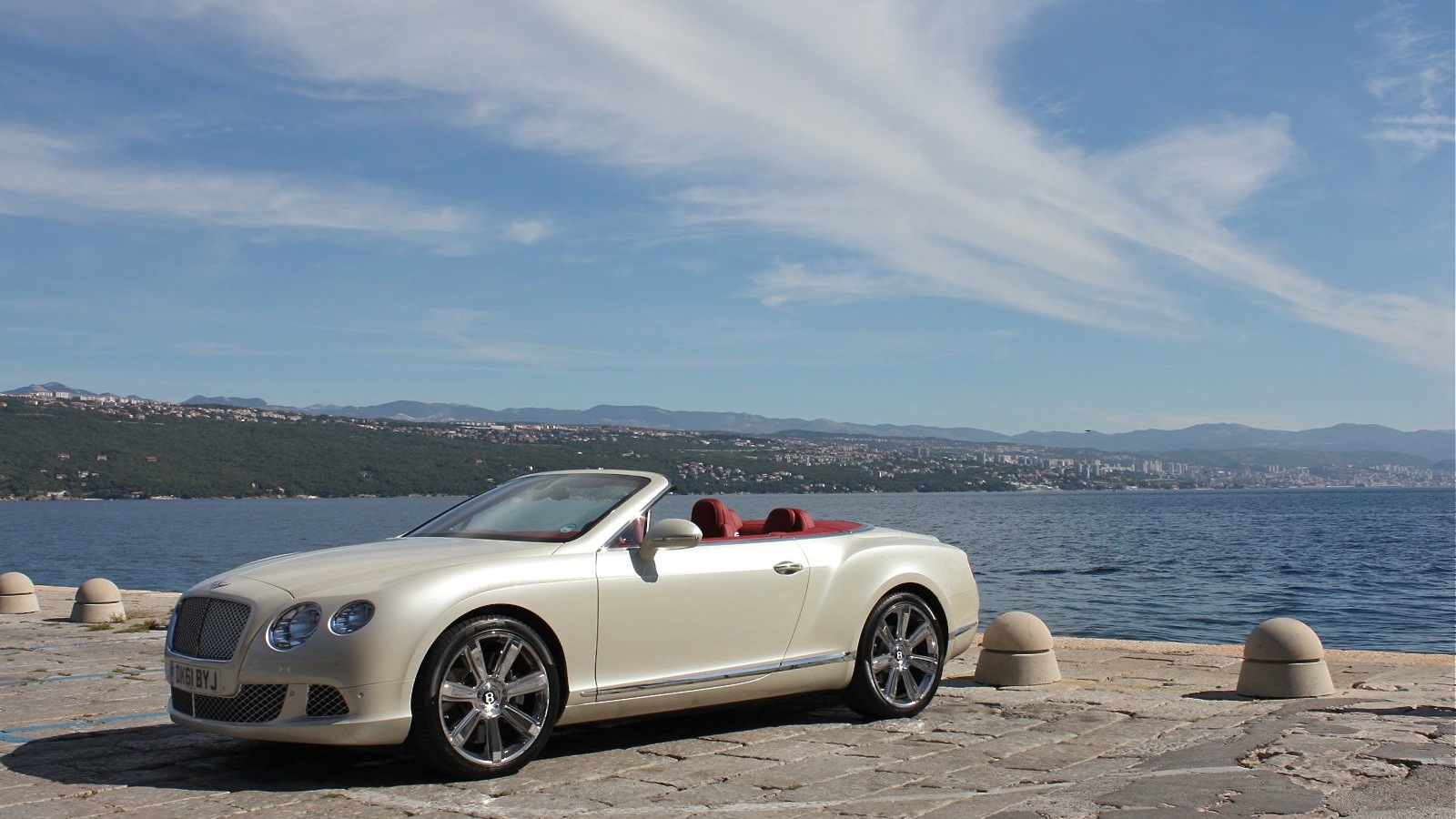 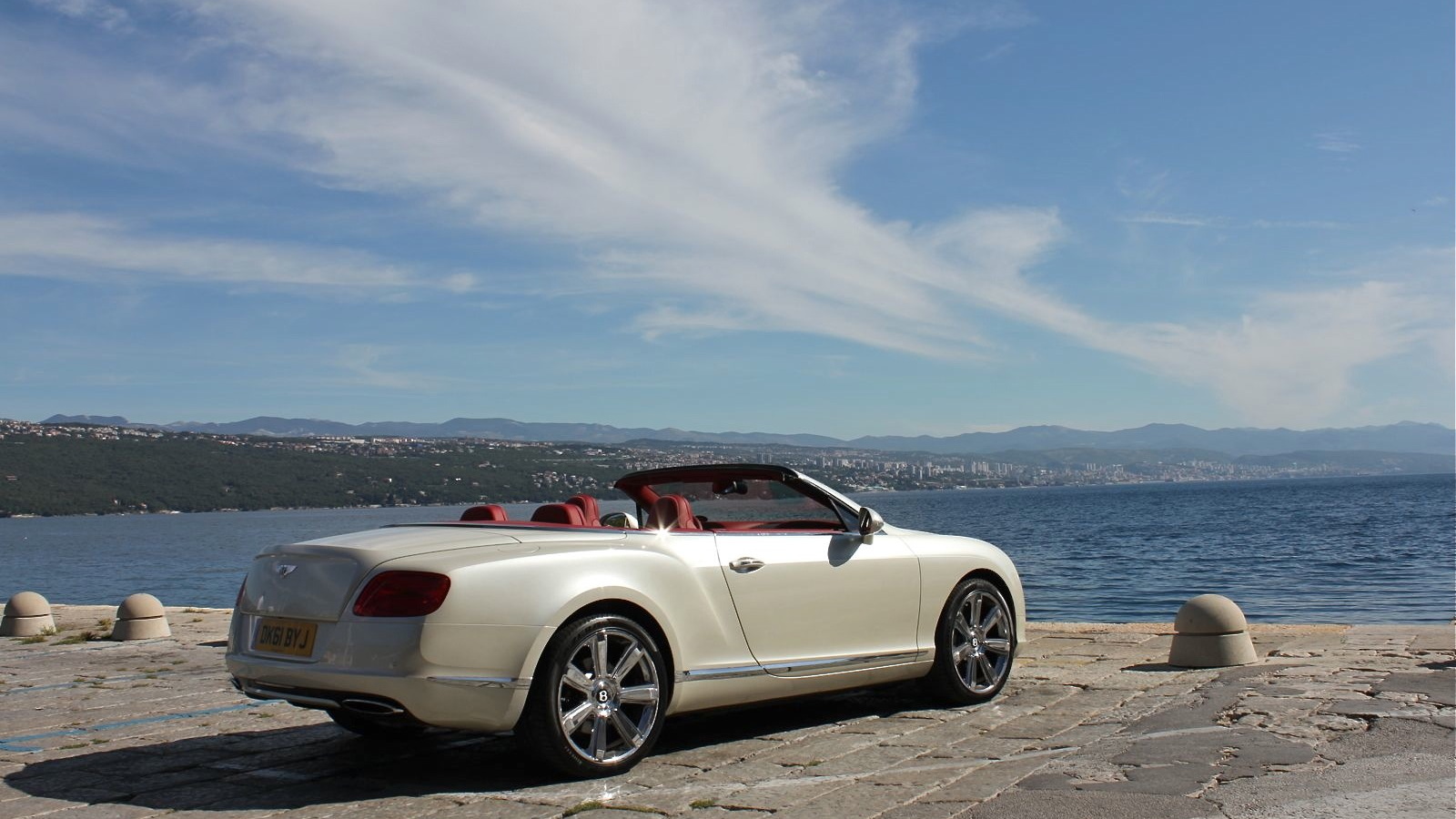 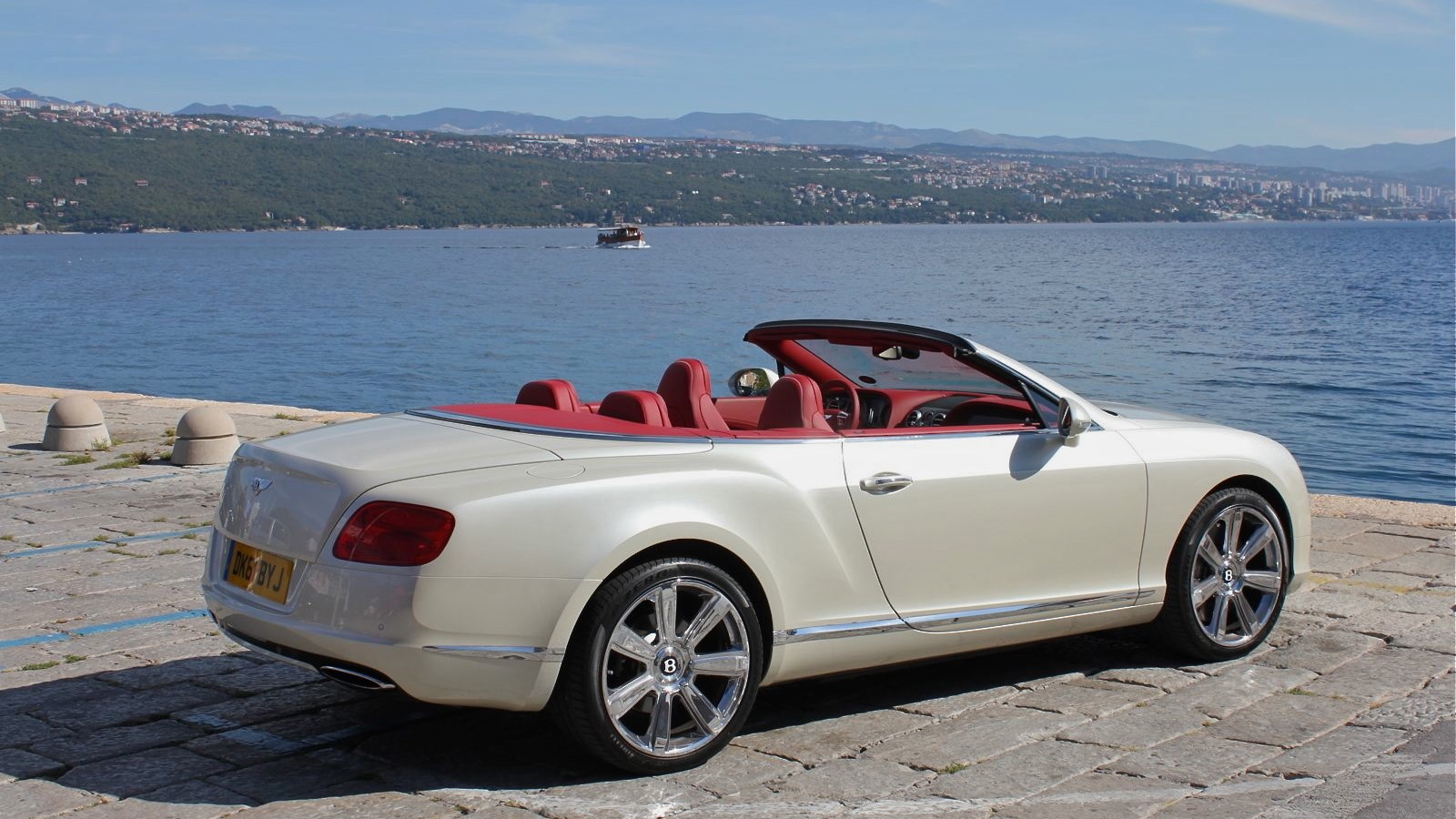 26
photos
Croatia doesn't sound like anything familiar to Americans, but Europeans have been calling it the "new Tuscany" since they turned their timeshare-building, economy-hyperinflating attentions away from the last "new Tuscany" in southern Spain.

We're still puzzled about what was wrong with the old Tuscany, but forget that. Croatia has it all.

We lawn-darted over fusty old Germany into Pula, an old Roman garrison with a spectacularly preserved arena at its heart, and steered north up the Adriatic coast for the resort playpen of Rovinj. It's "Rovigno" in Italy just 30 miles away, and Rovinj was in fact part of Italy until 1945--after it spent most of the 19th century snuggled up to the Hapsburg empire and was smothered through the fun half of the 20th century by the concrete embrace of Tito's Yugoslavia.

From Rovinj we launched into a sort of One Lap of Istria in the 2012 Bentley Continental GTC, the ragtop four-seat from Crewe. Buckled into a Silk White convertible with a lewd red leather interior, we lived on the duck side of the foie-gras regimen for a day, and figured out why people want to be obscenely wealthy.

It's toys like this one. The GTC may not be perfectly new, but it's distinctly different from the four-seat convertible that made its debut in 2006. Bentley's taken a steam iron to the GTC and its Conti GT coupe kin this year, and both are witness to the same careful clarifying that's been going on all over the Volkswagen AG portfolio. Look at the old Cayenne and Touareg and the new: adjusted proportions and better detailing give new life to those designs, and though the GTC didn't need to hit game reset like those SUVs, it's prettier and more interesting after its mid-cycle revamp.

It's all sharpened a pixel or two, even in the colors that don't read as cleanly, muted blues and dark greys. The fenders have more detail pressed into them; Bentley credits a hot-formed stamping process for the more precise folds and smoother draping over the front end. The rear panels have more crouch penned in. The U-shaped insets on the front and rear end cuts down the Conti's substantial visual mass, something we can't see as easily on the Audi lineup, for example, with its floor-to-ceiling grilles.

The Continental's starker details can still look a little unfinished. A massive chrome honeycomb separates them, and still it's canny how the oval headlamps command attention. Luxury-car eyes usually wear some sort of metallic brow or plastic shadow, but the Continental lets them meet body color bluntly. It's clever in a kind of passive-aggressive way: being unadorned is the adornment.  The buoyant Bentley details erupt in other places: the B pressed into the brake pedal and cast as the hood ornament, the right-sized Breitling clock studded in the dash.

Blindfolded, you'd know you were in a British car by touch and smell alone, and it's absurdly true in the Continental's cabin. The dash cap is covered in soft leather, the dash and console trimmed in a range of woods that come to the factory looking like thick brown sheets of nori. The carpeting is as woolly as any Speedo-wearing Turk, but soft as an easy chair. Everything that looks like metal is metal. Even the door handles are cold on first touch, and so are the gimbaled vents and the pull levers that control their air flow.

It's a ridiculous fin-de-siecle level of quality commanded by the price tag--and it's left up to choice, from 17 leathers, six combinations of them, and seven types of wood.

Stepping into a Bentley feels like strapping on NFL pads. Its linebacker mass has some deceptive wide-receiver moves hidden in its folds, and lightly patrolled Croatian roads gave us some leeway to tap into them while we pulsed from era to era, the view alternating from roadside Soviet artifacts to fascinated Croatian locals not yet bored with bristling displays of raw capitalism.

The Continental's running gear is as subtly transformed as the sheetmetal. There's still a twin-turbocharged W-12 engine under hood--CEO Wolfgang Duerheimer says it's a brand hallmark now--and it still sends steamer-ship quantities of power to all four wheels via a ZF six-speed automatic transmission.

The engine now rates 567 horsepower and 516 pound-feet of torque, some 15 hp and 37 lb-ft more than the outgoing model. (Outgoing except for the Supersports GTC, which stays on sale for one more model year until its replacement arrives.) By the numbers, Bentley calculates 0-60 mph times of 4.5 seconds and a top speed of 195 mph--all for a vehicle weighing 5501 pounds, more than most seven-seat SUVs we admire. To describe its performance as stupendous doesn't begin to factor in its heft. The GTC just consumes pavement, its great-white jaw strength undercut by the peculiar whuffling groan of the W-12. It's the standout sensory perception we'd change, if we could: pipe in a rumbling V-8 soundtrack and the slap-shot acceleration would suit the GTC's muscle-car tenor perfectly.

The six-speed automatic gets significantly quicker, Bentley says, with shifts up to 50 percent faster than before. If you're wondering why no cutting-edge eight-speed, skip back a paragraph to that locomotive torque figure. We're sure the GTC could use it for better fuel economy, since it's an EPA-judged gas guzzler at 11/19 mpg--but we're not certain it would improve the Continental's brilliant drivetrain performance.

It's so well-tempered, we spent most of the day driving in Sport mode, which puts a little more caffeine yet into the shift programming and throttle mapping. We saw about 120 mph on wide-open Croatian highways built in anticipation of a new era and, barely breathing hard, the GTC pounced on paddle-triggered downshifts and glided through upshifts.

There's nothing quite light about the Continental, but new suspension hardware lightens up the driving feel from masculine territory to something more neutral. The GTC's all-wheel drive now apportions its power slightly more to the rear, in a 40:60 split. The air suspension can be firmed up from Comfort to Sport with a touch of a console-mounted button and a tap or three on the LCD touchscreen. With those changes, the slight increases in front track width, and retuned steering, the GTC's lost some of the leaden feel that put more pomp than presence into its handling. It still loves a long sweeper best, and at its size it still waves off the ride harshness that any other convertible with available 21-inch, 35-series tires would "enjoy," but the Continental feels like it wants to cut corners with you--in the hairpin sense.

There's no corner-cutting anywhere else, but the GTC's star turn as a convertible does trim precious cubic inches off its interior space.

It isn't the convertible lid that snips space away. The three-layer fabric top and its rear glass window stack in a fairly compact way. It's the structural reinforcements that make the GTC the stiffest convertible in the world, according to Bentley, that cut away at shoulder space in the back seat and add dozens of pounds to its curb weight. It's worth the sacrifice to us, particularly since the top also can be raised or lowered at up to 20 mph, and take just 25 seconds to go all the way, either way.

The Continental starts off relatively snug inside, anyway. Even as a coupe there's much less space in back than the size implies. Front-seat passengers just won't care. They'll be cosseted in 10-way power seats with massaging controls and optional ventilation, and a new warm-air vent embedded in the shield-shaped seatback that can extend the top-down driving season just like the similar AIRSCARF system in the Mercedes SLS AMG. Up front, there's ample knee and head room--but despite slimmer front seats, there's still not enough back-seat leg room when big adults ride ahead.

The trunk's in the same dinghy. Press the B in the winged logo on the decklid, and the composite deckled opens to a trunk that's just enough for a couple of airline-sized rollaboards and a wind deflector tucked in a case. In our car, at least, that luggage would be coddled in deep, lipstick-red carpeting more plush than the stuff in our hotel.

Those exquisite finishes and other features are the driver that sends the Continental GTC's sticker out of this world. There's a fabulous removable sunglasses case veneered in wood, that snaps into place on the GTC's center console. It's $550. A navigation system with Google maps and a vibrant 8-inch LCD touchscreen is included in the base price; its DVD and iPod controls can be paired with a Naim-engineered audio system with pure, flat sound, for just an additional $7015. More of your rapidly devaluing dollars have to be sunk in 21-inch wheels, for $5340; in pearlescent paint, at $15,255; in the $960 neck-warming vents; and in Bluetooth, which at $435 seems like a safety feature that should be free in a car of this status.

The $252,405 retail price of our test vehicle makes the Continental GTC one very exclusive dream machine. For the same money, you could find a pile of Croatian rubble and rebuild it under a new-Tuscan sun into a Diane Lane fantasy--one missing the critical component, that being Diane Lane. Or you could buy a ready-made fantasy, already built to an exacting standard, already bristling with charms both modern and quaint.

You could even sleep in it. The first chill of Istrian fall is no match for the warm breeze at your neck, or for the 195-mph wind at your back.