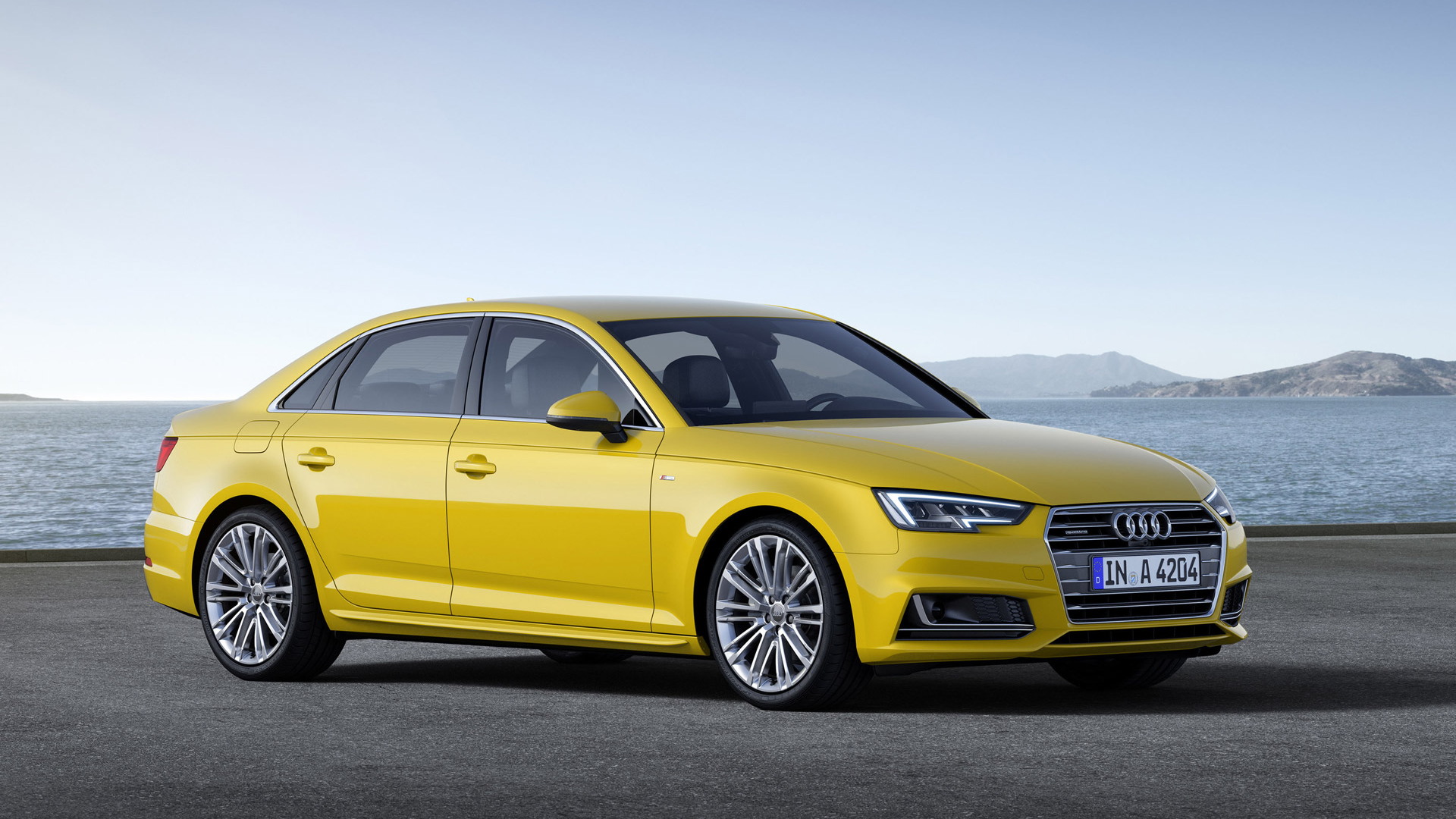 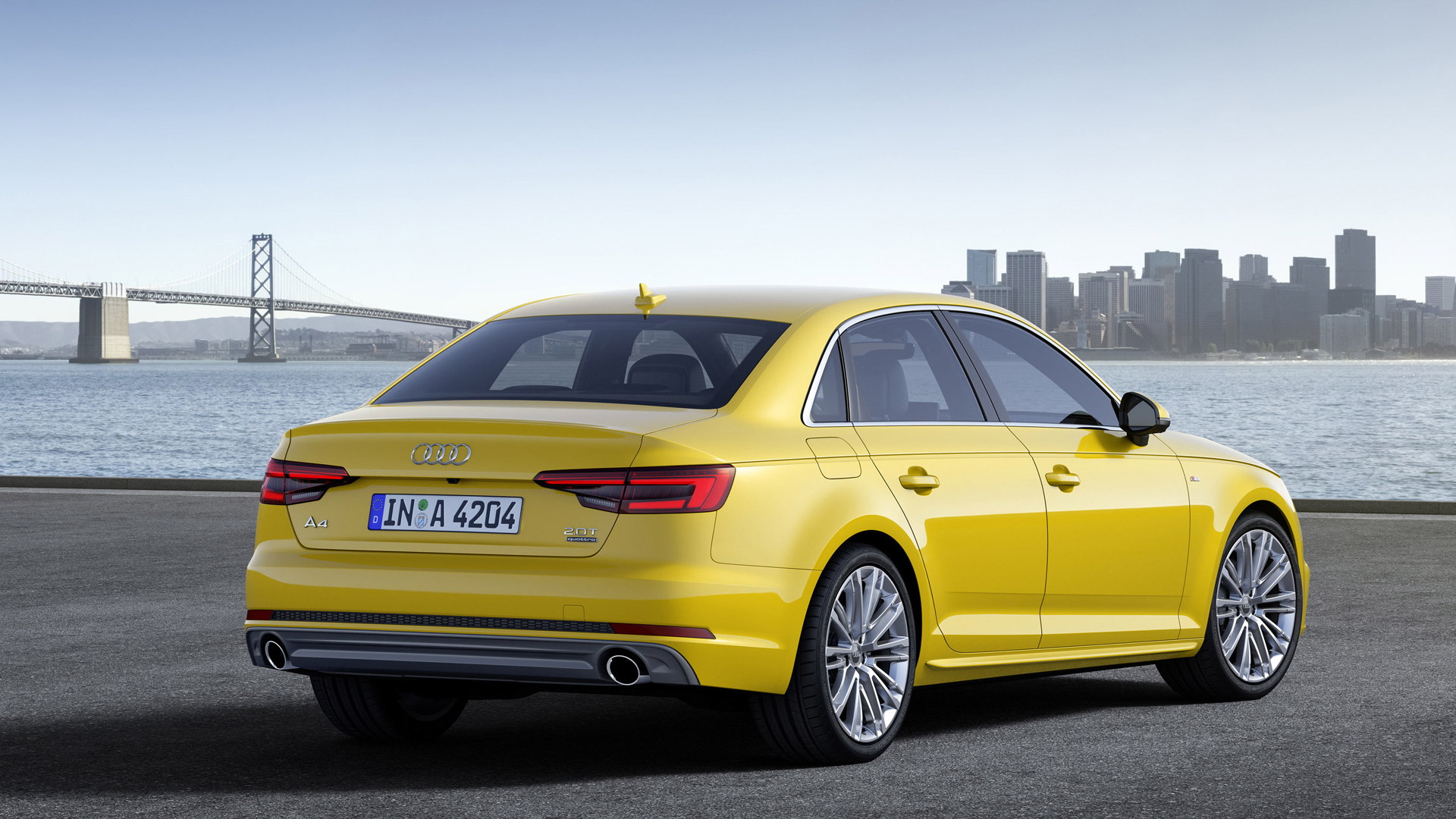 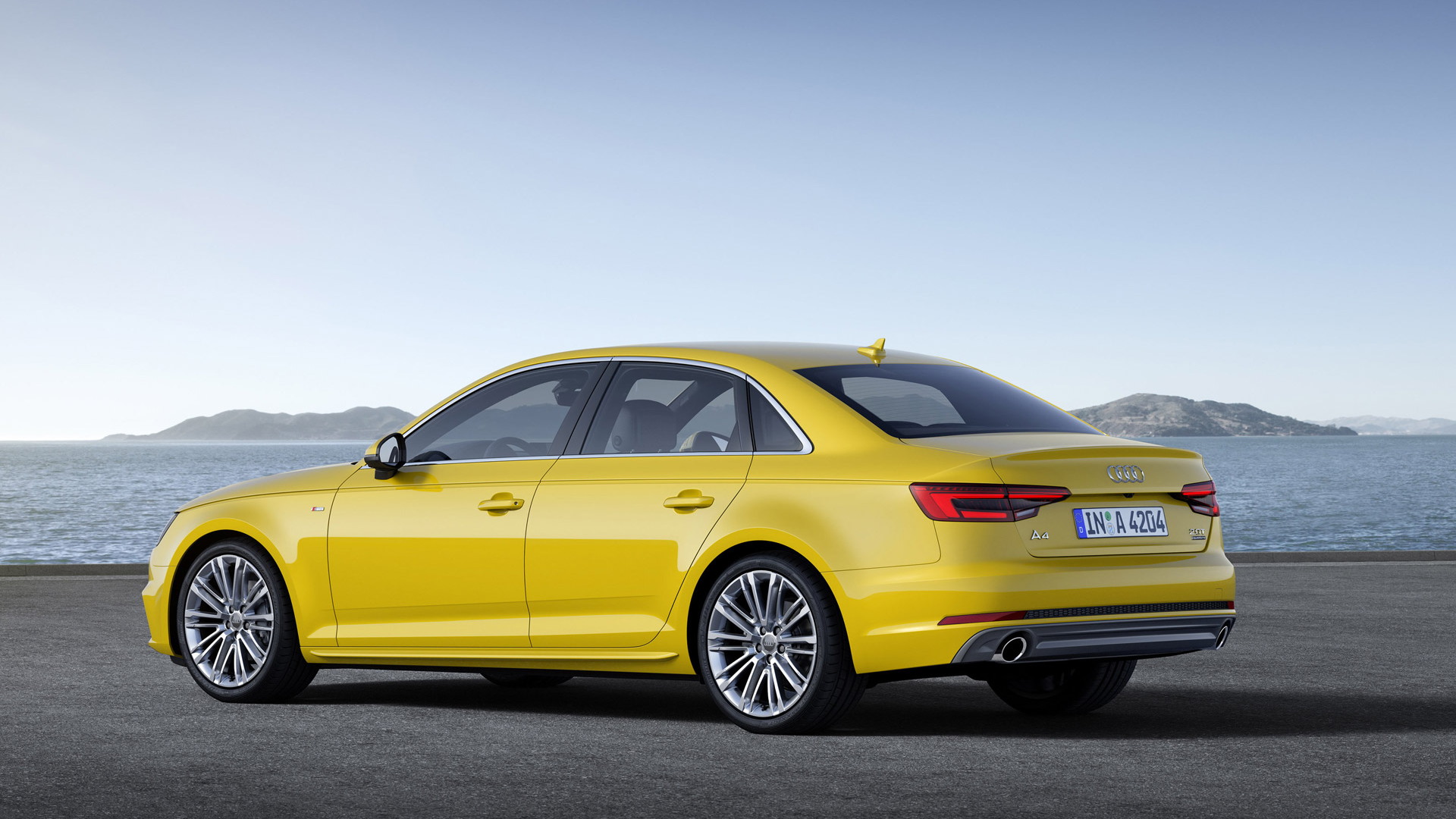 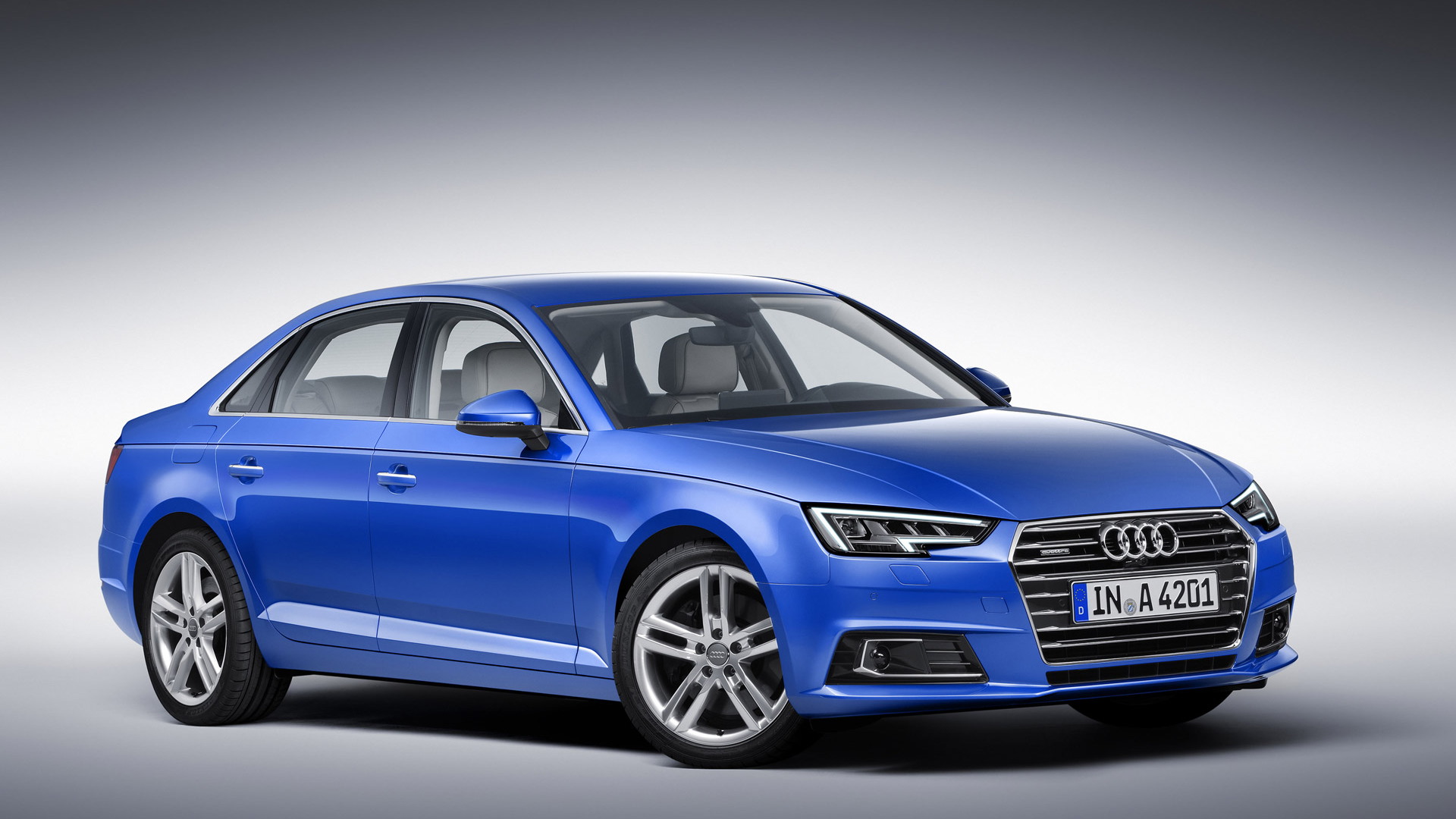 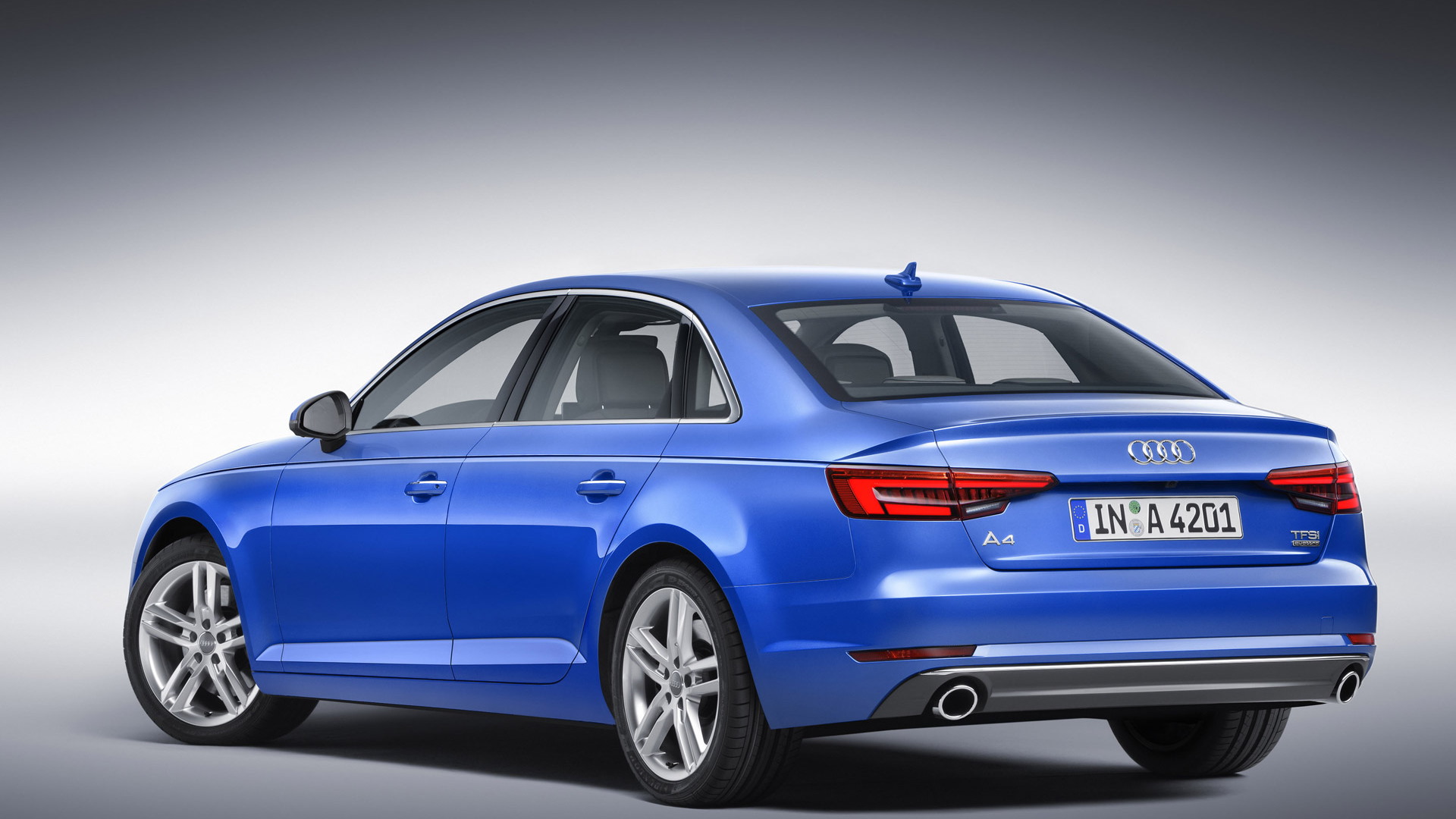 Come 2016, buyers in the market for a small sports sedan with a touch of luxury are going to be spoiled for choice. In addition to the existing Cadillac ATS, Lexus IS and Mercedes-Benz C-Class, all impressive cars in their own right, we’ll see the arrival of an updated BMW 3-Series plus all-new contenders in the form of the Alfa Romeo Giulia and Jaguar XE. We can now also add a redesigned version of Audi’s A4, revealed in full today ahead of a formal debut at the 2015 Frankfurt Auto Show in September.

Both the new A4 sedan and A4 Avant wagon have been revealed, though we’re only expecting the former here in the United States. It will arrive sometime next year, as a 2017 model. Longroof fans shouldn’t be too disappointed, though, as Audi is likely to once again offer an A4 Allroad. Look for a reveal of this particular model in about a year’s time.

The new A4 is Audi’s second model to ride on the new MLB Evo platform, which will eventually underpin most of the automaker’s models from the A4 up (the first vehicle to adopt the new platform is the 2017 Q7). Previewed in Audi’s Sport quattro concept, the MLB Evo uses a combination of high-strength steel and aluminum to help get weight down. Audi says some A4 variants are as much as 264 pounds lighter than their predecessor models, despite the new car growing in size.

Equipped with a 1.4-liter four-cylinder engine (European spec), the curb weight comes in at just 2,910 lbs. Overall length, meanwhile, is 15.5 feet while the wheelbase is 9.3 ft. The outgoing model has an overall length of 15.4 ft and wheelbase of 9.2 ft. Audi says its new A4 also has the best drag coefficient in its class at 0.23, made possible by additional openings up front that guide air around the body as well as an underbody that’s flat and mostly sealed off.

Specifications for the U.S. market are yet to be confirmed but expect the lineup to consist of a 2.0-liter model with Premium, Premium Plus and Prestige trim levels initially, and later expanded with diesel, plug-in hybrid and sporty S4 variants, the latter likely to come once again with a supercharged 3.0-liter V-6.

As previously reported, the new A4’s 2.0-liter four-cylinder is an all-new design. The engine has various output levels, ranging from 187 horsepower and 236 pound-feet of torque to 248 hp and 272 lb-ft. By comparison, the outgoing A4’s 2.0-liter mill develops 220 hp and 258 lb-ft. Front-wheel drive is still standard, with a fully mechanical quattro all-wheel drive remaining an option. Transmission options include six-speed manual as well as seven-speed S tronic dual-clutch and eight-speed Tiptronic automatic units.

Inside, shoulder width and head clearance for driver and front-seat passenger have increased by 0.4 and 0.9 inches respectively. Interior length has grown by 0.7 in and rear legroom is actually 0.9 in larger. The front of the dashboard features a broad band of air outlets and a large decorative surface. The quality of workmanship appears high, approaching the quality seen in the latest C-Class. Colors and materials follow a new line concept allowing customers even more freedom during configuration.

For the driver, there’s a fully digital 12.3-inch instrument cluster available, dubbed the Virtual Cockpit by Audi. The standard setup has conventional analog tachometer and speedometer dials, with a 5-inch display in the center. Another technical innovation in the new A4 is the MMI interface, especially in the fully loaded version MMI Navigation Plus with MMI Touch. Its menu structure has been completely redesigned so that it’s more like a smartphone.

MUST WATCH: Koenigsegg One:1 Smashes Record For 0-300-0 KMH Run--Updated With New Video

Finally, there are some of the latest driver assistance systems. These include a predictive efficiency assistant that helps you save fuel; Audi active lane assist to help you to stay in lane, parking assist to handle those tricky parking spots, attention assist drowsing detection, and the Stop&Go adaptive cruise control including traffic-jam assist, which eases driving in slow-moving traffic. The new A4 also features an object detection system.

At speeds up to 50 mph, the system scans the road for other vehicles and pedestrians using a windshield-mounted front camera with a range of over 300 ft. If there is the threat of a collision, the driver receives a series of warnings, and if necessary the car starts to apply the brakes fully. At speeds up to 25 mph, it can fully prevent accidents within the system limits. At higher speeds, warnings and brake intervention can reduce the impact velocity.

Full 2017 A4 specs for the U.S. market, as well as the all-important pricing and availability details, will be announced closer to the market launch.