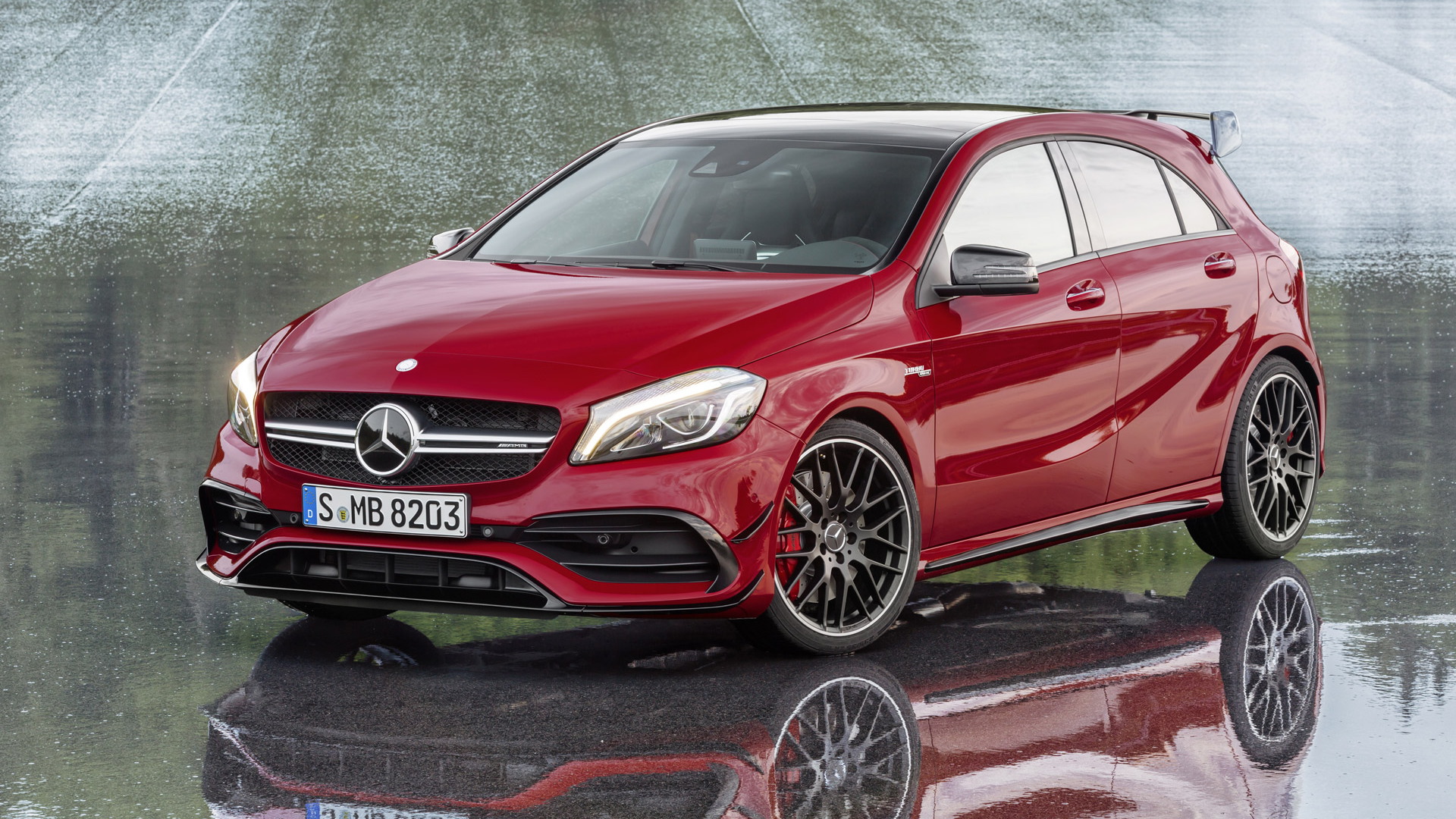 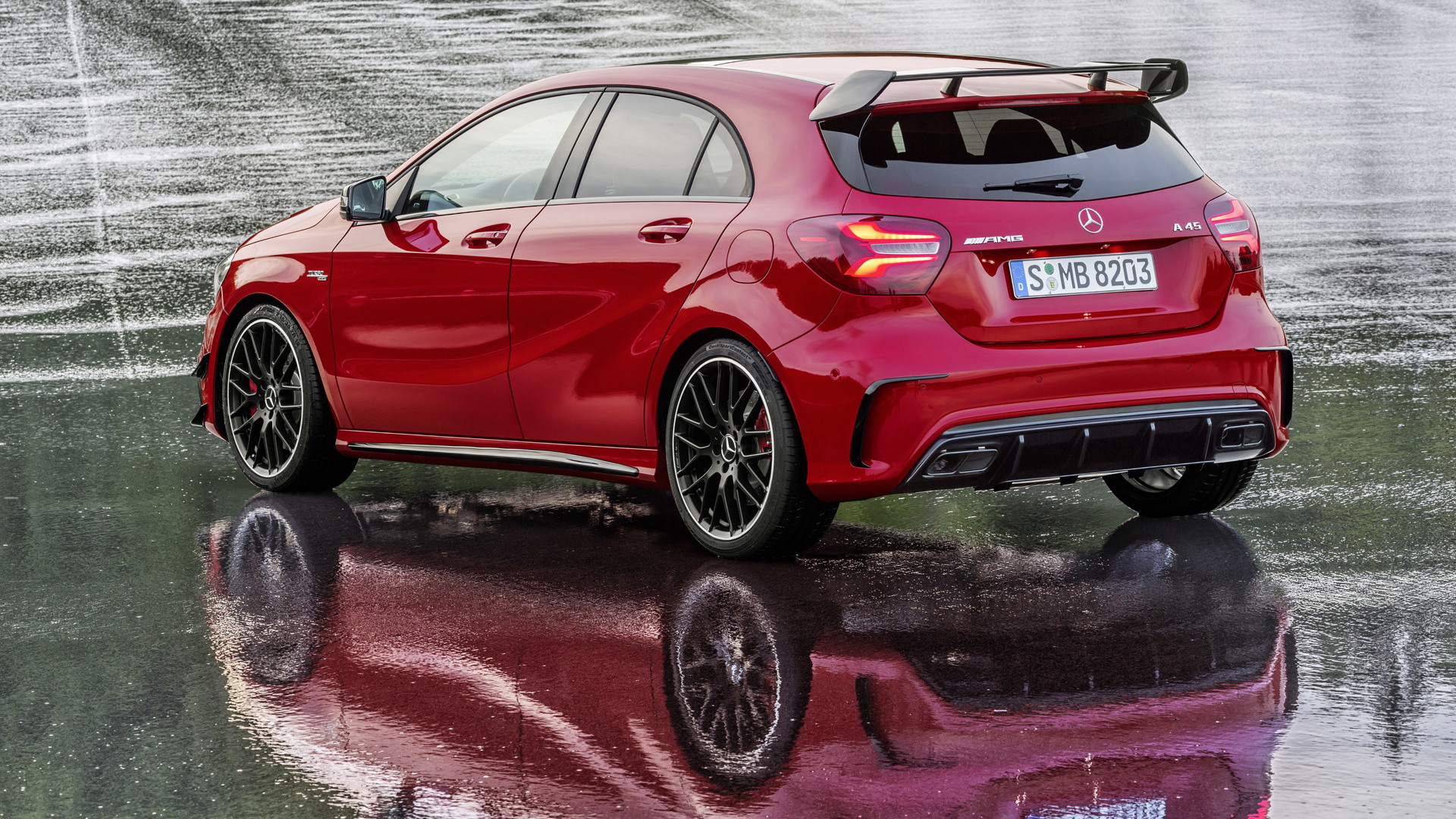 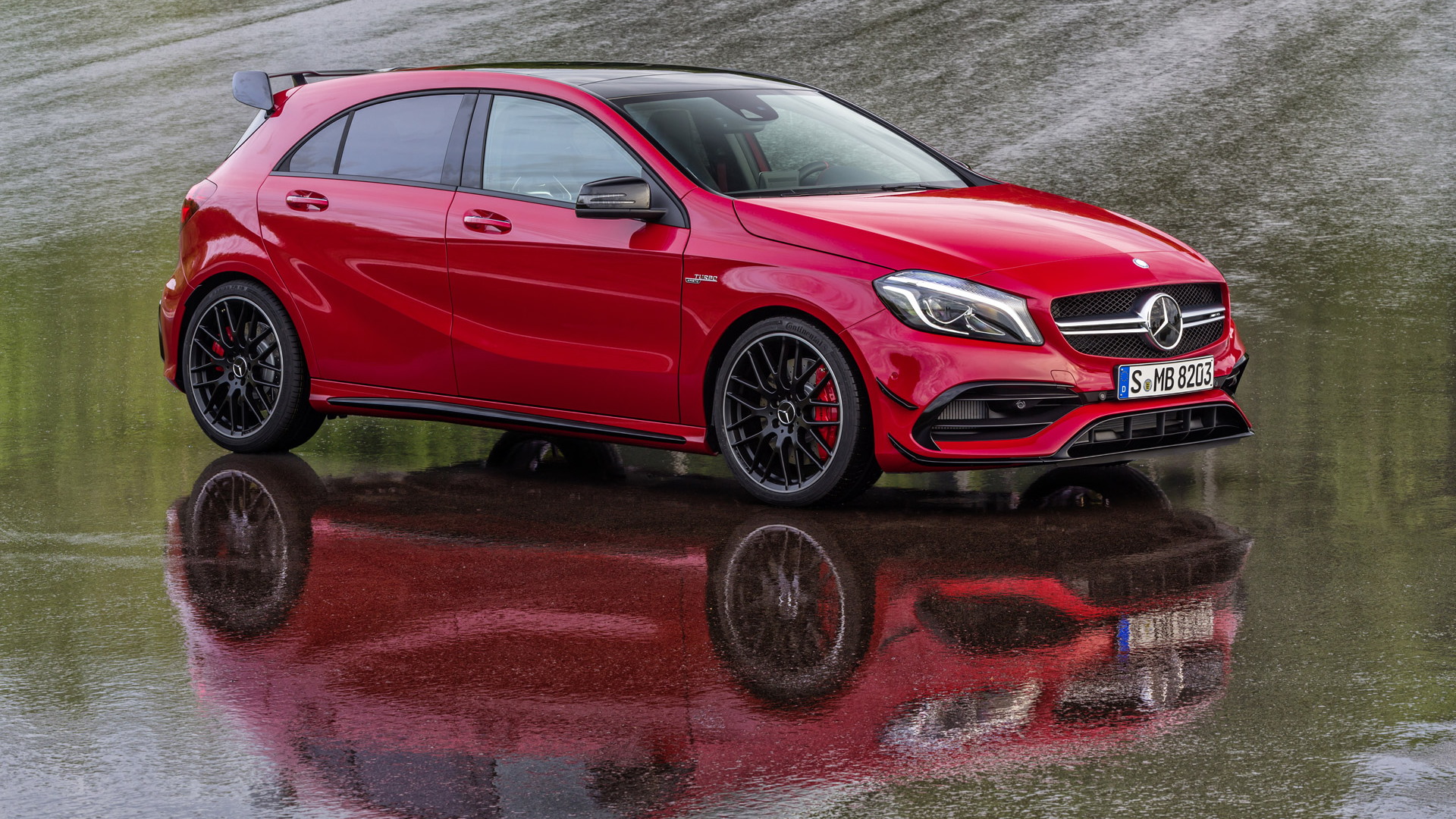 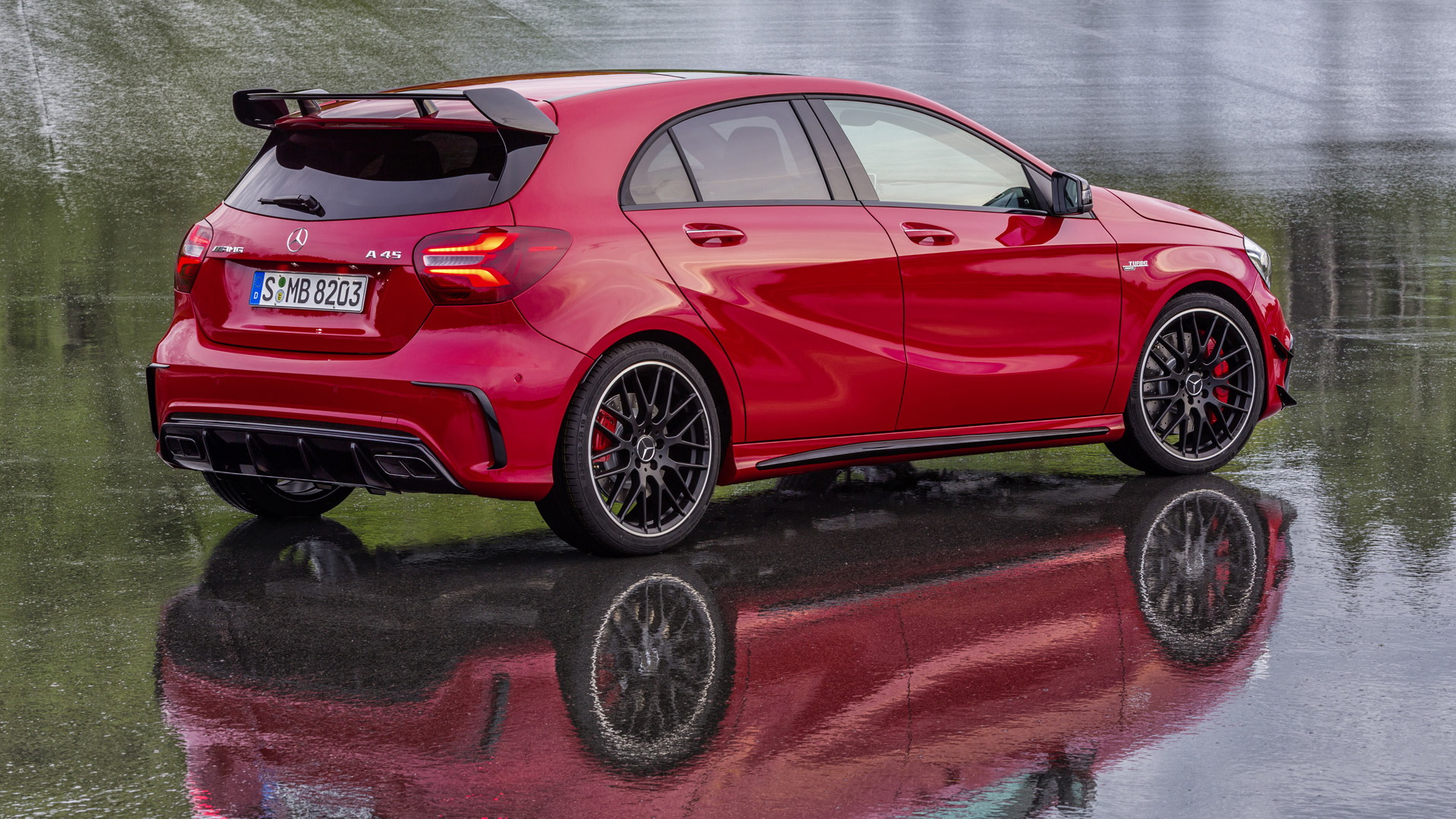 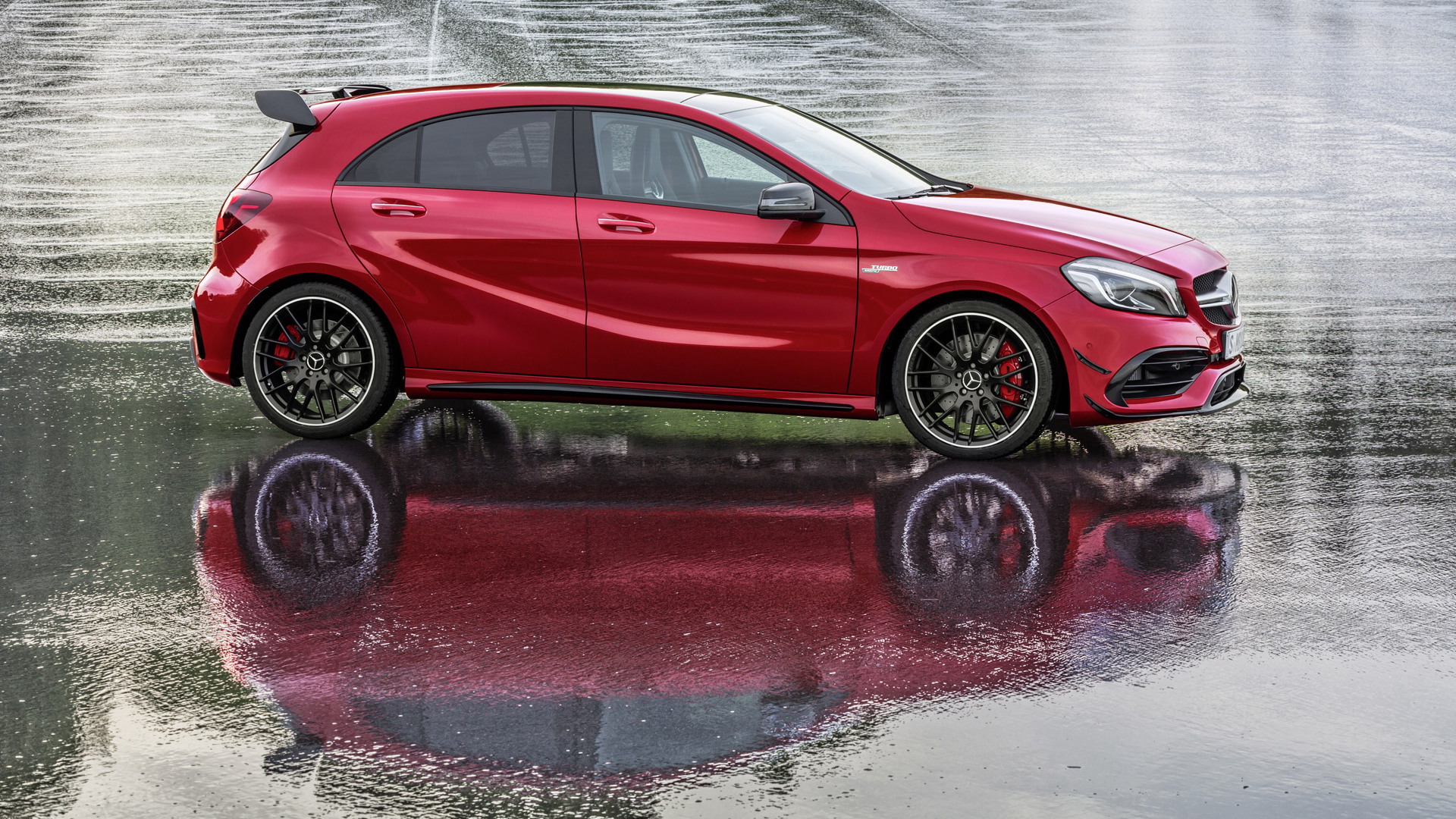 Even in this era of engine downsizing and ever-present fuel economy and emissions regulations, the power wars are alive and well. Audi fired the last shot in the hot hatch arena when it lobbed its RS 3 on the market with a 362-horsepower rating, and now Mercedes-AMG has retaliated with an updated version of its A45 4Matic producing a staggering 375 hp. The updated A45 is the flagship of the 2016 Mercedes-Benz A-Class range, which just underwent a mid-cycle update and is on show this weekend at the Goodwood Festival of Speed ahead of a formal debut at September’s Frankfurt Auto Show.

While there are still no plans to bring the A-Class to the United States, at least with this generation, we’ll see many of the updates filter across to the CLA and GLA models once they undergo their own updates. Yes, look forward to the A45’s extra poke making its way into the CLA45—Motor Authority’s Best Car To Buy 2014.

Power still comes from a turbocharged 2.0-liter four-cylinder engine, which in addition to producing 375 hp also has a crazy 350 pound-feet of torque on tap. Impressively, boost pressure remains unchanged at 26 psi. Instead, the engine specialists at Mercedes-AMG mainly achieved this increase in power output with a newly configured valve assembly and optimization of the combustion process.

But it’s not just about brute power, as other areas of the car have also been optimized. The revised gear ratios, aerodynamic fine-tuning and the new Dynamic Select driving modes system—with Comfort, Sport, Sport + and Individual modes—all help boost performance to a higher level. According to Mercedse-AMG, the A45 will now reach 62 mph from rest in just 4.2 seconds, which is 0.4 of a second quicker than before.

Maximum traction also on tight bends is ensured by the standard all-wheel drive and the optional front axle locking differential available for the first time. This is part of a Dynamic Plus package that also adds adjustable sports suspension setup with two-stage adaptive damping, as well as a special Race mode for the Dynamic Select driving modes system that turns everything to the max.

Other changes made to the A45 include shorter transmission ratios in 3rd to 7th gear for the standard seven-speed dual-clutch transmission, improved aerodynamics brought about by the revised front spoiler and rear diffuser, and a new multifunction sports steering wheel. The infotainment system has also been updated and includes Apple CarPlay smartphone integration as well as Internet connectivity.

With the regular A-Class, the engineers at Mercedes strived to make the car even sportier. For example, they have added the Dynamic Select driving modes system, expanded the lineup of engine offerings, and launched a new Motorsport Edition variant that celebrates the success of the Mercedes AMG Formula One team.

Striking lines, dynamically curved surfaces and a coupe-like profile characterize the exterior of the A-Class. For the latest version, the designers added a new, more arrow-shaped front bumper that more closely resembles the design on the Concept A-Class unveiled in 2011. Also new is the diamond grille pattern, LED headlights, revised graphics in the tail-lights, and new exhaust tips integrated with the bumper.

Inside, the main instrument cluster has been tweaked with new dial graphics and better quality materials have been used for many of the switches. The central display is now a large, free-standing and frameless unit that measures up to 8.0 inches diagonally. New colors and materials as well as new finishes for the trim in the dashboard area round out the changes.

As for the new Motorsport Edition, this gets special turquoise elements on the exterior that match the hue used on the Mercedes AMG F1 livery. Eye-catching details in the interior include the green surrounds of the air vents and the contrasting stitching in green. The sports seats are lined in leather and microfiber trim and also have green decorative strips, as have the seat belts. The Motorsport Edition is available for most variants, though not on the Mercedes-AMG A45.

As mentioned above, the engine lineup has been expanded. The entry-level A160 now gets a 100-hp four-cylinder engine while the range-topping A250 Sport gets a 2.0-liter four-cylinder with 215 hp. Above this model sits the 376-hp A45.

In the area of tech, the latest A-Class range gets a revised infotainment system with CarPlay smartphone integration and a more intuitive menu system with improved graphics. There are also extra electronic driver aids including the Attention Assist drowsiness detection system, Distronic Plus distance control system and the Collision Prevention Assist system with autonomous partial braking to reduce the risk of rear-end collisions.

Sales of the updated A-Class range commence in Europe in late September. A similarly updated version of the CLA should follow sometime in 2016.