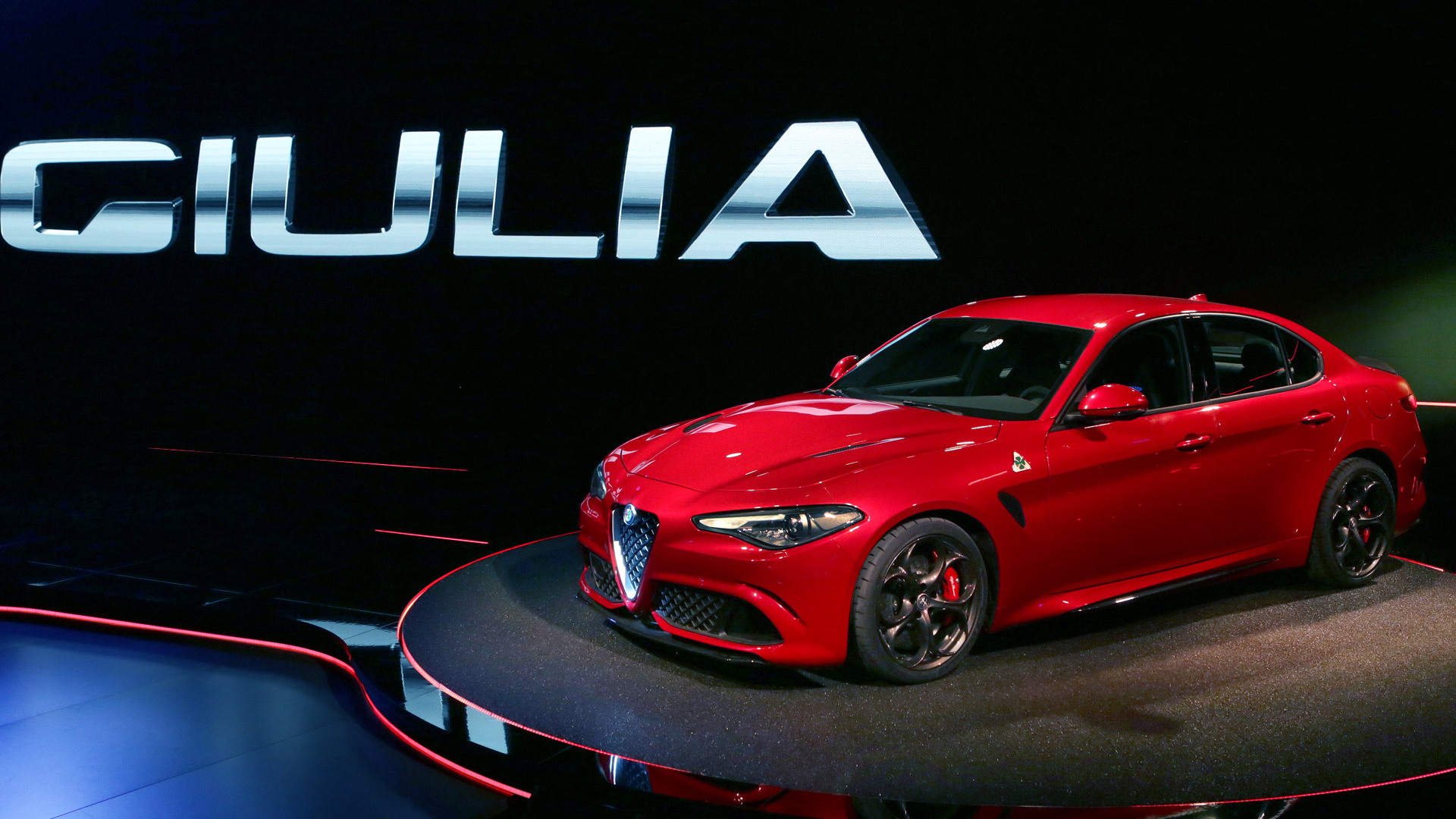 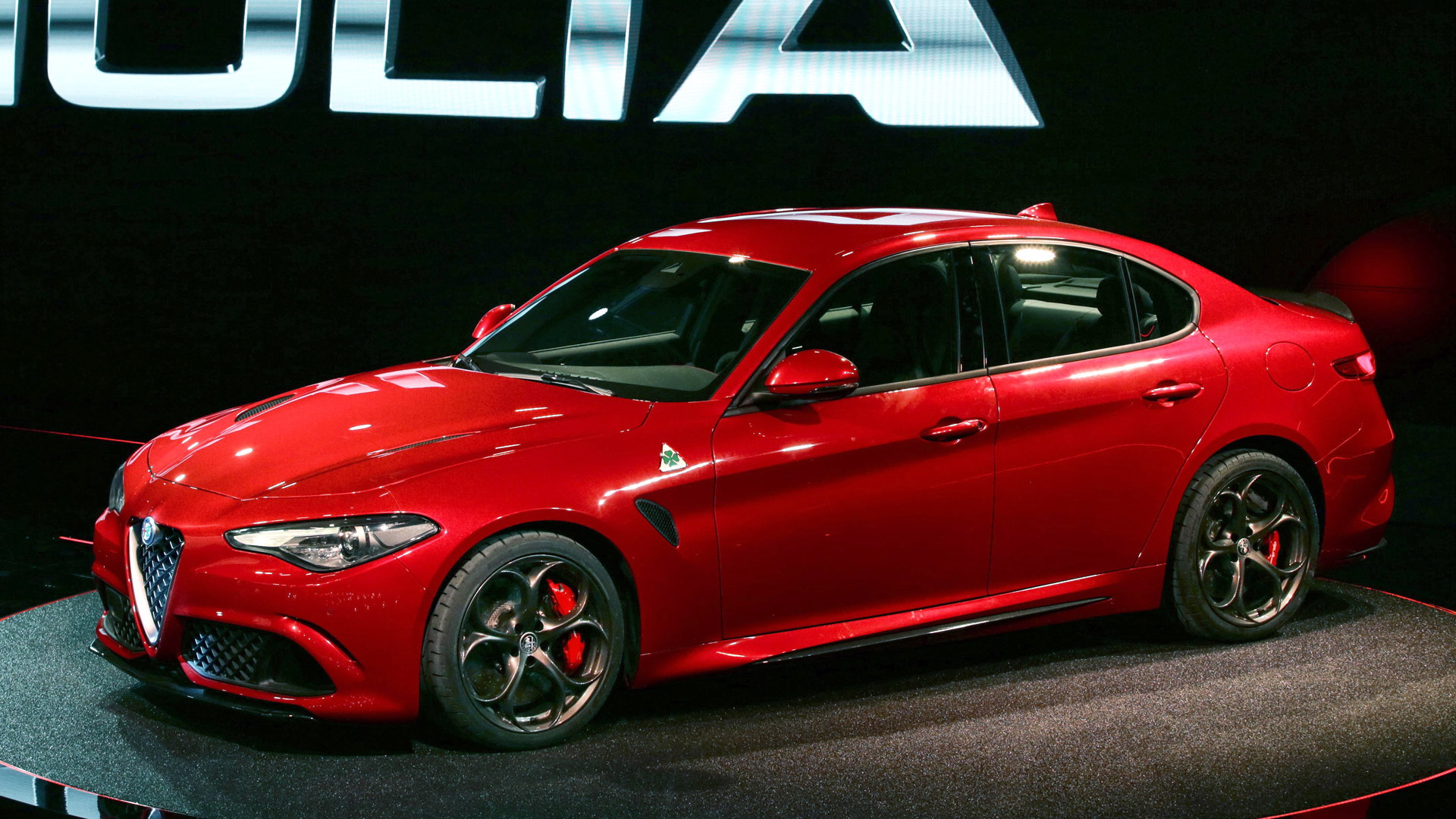 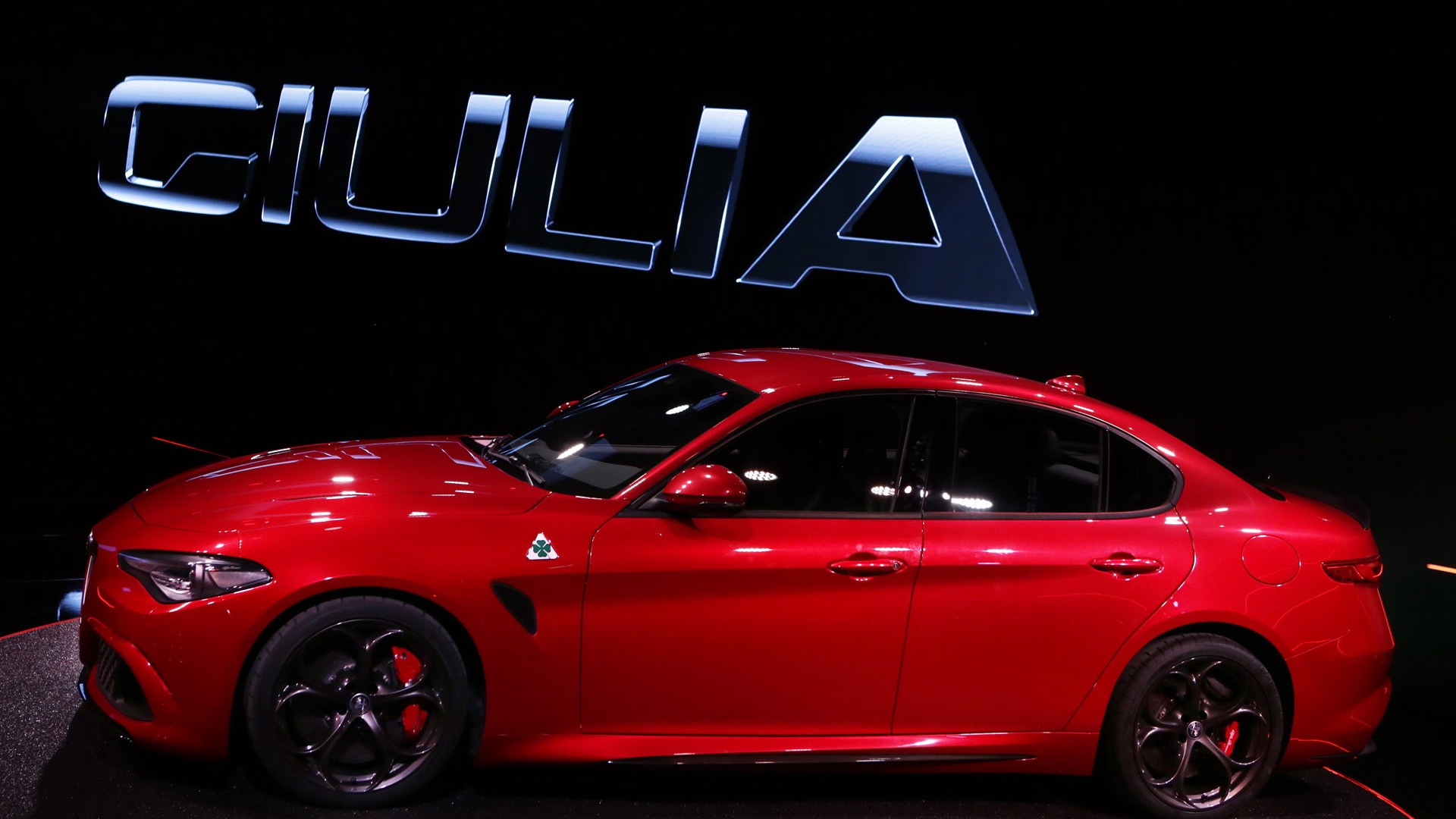 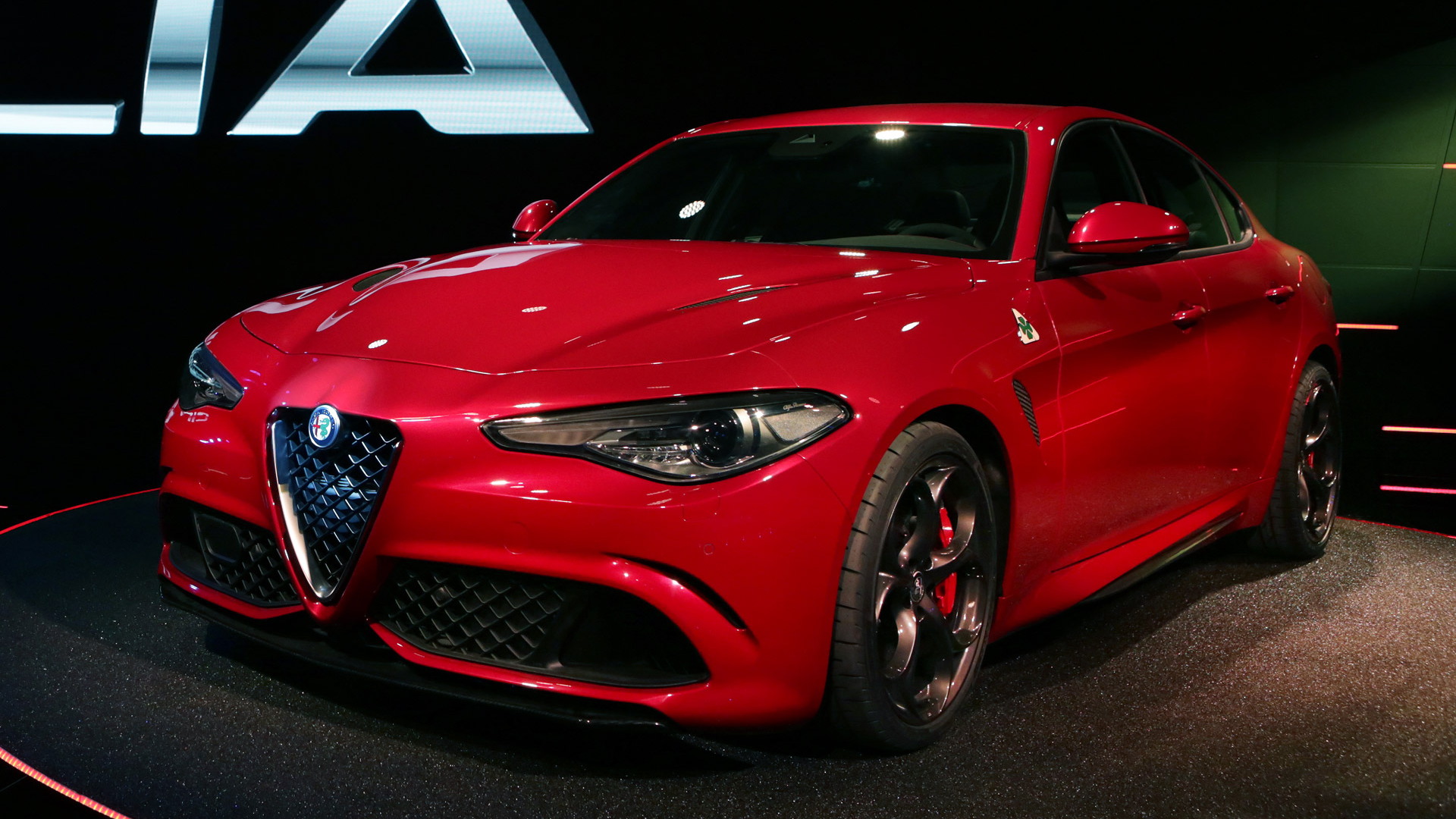 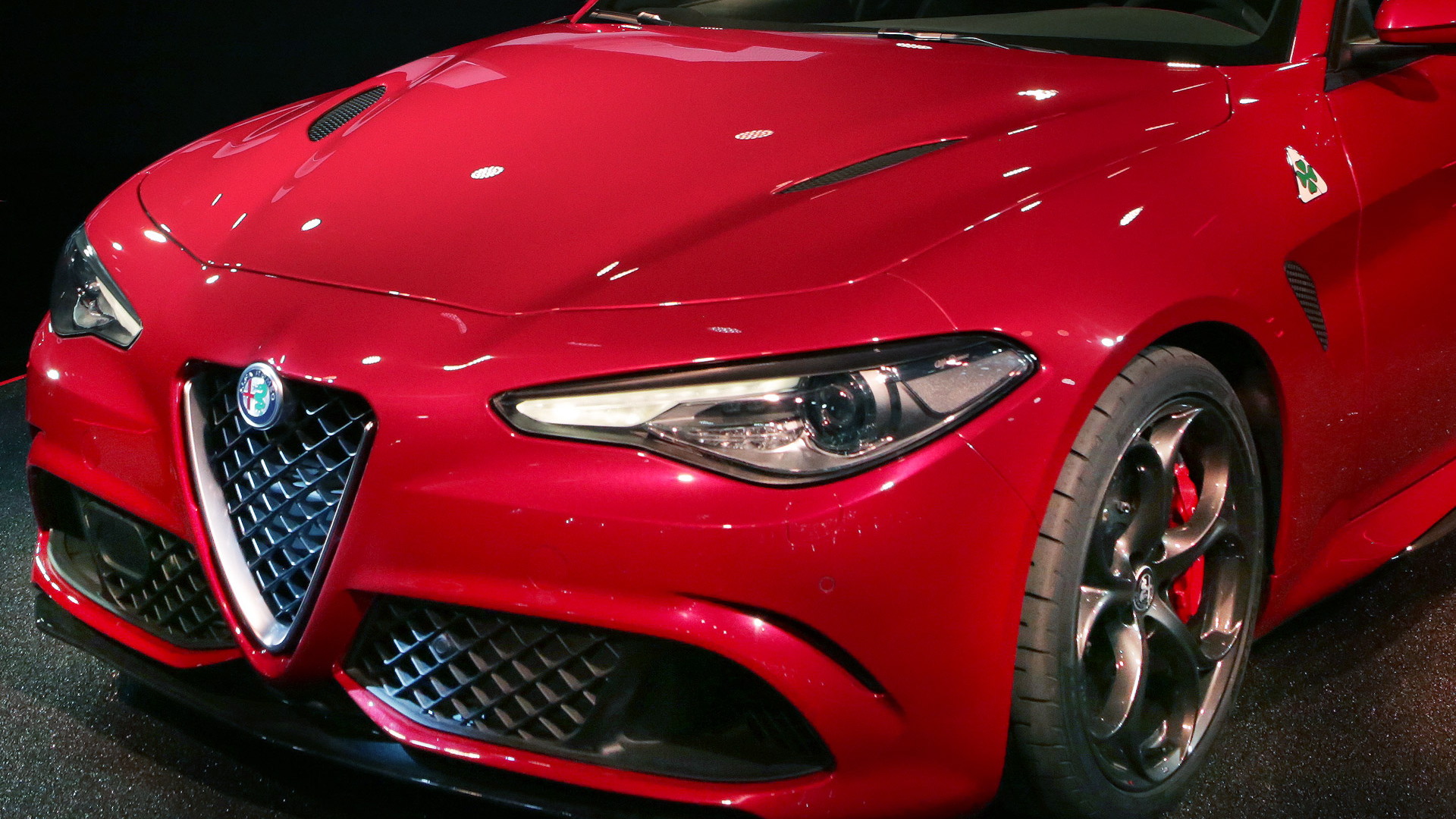 Alfa Romeo is serious about putting its brand back on the map. This week at the official Alfa Romeo Museum in Milan, Italy, the automaker revealed the Giulia in high-performance Quadrifoglio trim—the first car in an eight­-product assault scheduled for the next three years. The Giulia is a small four­-door sedan aimed at the BMW 3-Series, though with what looks like slightly bigger dimensions, and the Quadrifoglio version is a BMW M3 fighter.

Very few Americans have a good handle on the Alfa Romeo brand and it turns out the same could be said for the automaker itself. Prior to starting this project, Alfa executives studied the brand and its history, asking consumers what they thought it represented. They concluded that their perspective needed to change, not the brand. Once they realized that Alfa was not a mainstream brand, that it stood for leading Italian engineering and style, and that the cars should have a thoroughbred character, they set up a skunkworks team of engineers, technicians, and designers to develop the Giulia. That began a little over two years ago.

In his speech at this week's press conference, Fiat Chrysler Automobiles [NYSE:FCAU] CEO Sergio Marchionne said this project wouldn’t have been possible under the former iteration of Fiat. The company lacked the financial resources, technical capability, and global distribution network to make this car possible. Fiat’s acquisition of Chrysler in 2009, however, remedied those problems, and the strengths of the new company are about to bear fruit.

According to FCA senior vice president of communications North America Gualberto Ranieri, the Giulia rides an all­-new rear­- and all­-wheel­-drive platform. Alfa claims the car will have a best­-in­-class torsional rigidity, a best­-in­-class power­-to­-weight ratio of 2.99 kilograms per horsepower, and a 50/50 front/rear weight balance thanks to smart engineering and lightweight materials. The mechanical bits support these claims. Carbon fiber is used for the driveshaft, hood, and roof, while the doors, mirrors and suspension are aluminum components. An aluminum composite and plastic crossmember sheds pounds at the rear, while carbon ceramic brakes save unsprung weight at all four corners.

The front suspension is a double wishbone design unique to Alfa Romeo, and a multi-link independent suspension is found at the rear. The car also uses adjustable dampers, mechanical torque vectoring, and an Integrated Brake System that reduces stopping distances. Alfa didn’t specify if the steering is electric or hydraulic assist, but it did say that it will be the most direct steering on the market.

The Quadrifoglio is powered by a twin­-turbocharged all­-aluminum V-6 with cylinder deactivation, a technology Alfa Romeo pioneered in the early 1980s. Ranieri says the engine is all­-new as well, but it is more likely a heavily modified version of the 3.0­liter Ferrari-developed engine in the Maserati Ghibli. The V-6 pumps out 510 horsepower, and Alfa says it will rocket the car from 0-62 mph in just 3.9 seconds. Transmission options have not been shared, but a peek into the interior of a display vehicle revealed a six-­speed manual. Alfa did say that shifts will be prompt, which points to a dual­-clutch gearbox as the likely alternative.

To kick off the brand’s renaissance, Alfa Romeo has redesigned its family crest­-style logo with fewer elements. Don’t worry, though, the snake eating a baby is still there. The Giulia’s design combines elements of the past with a modern look and a sporty stance. The familiar Alfa Romeo trefoil grille resides up front, but the car has powerful rear haunches that are reminiscent of the previous-­generation M3. The body is draped over the longest wheelbase in the class, but short front and rear overhangs give it a tidy overall length. A front active aero splitter increases high­-speed downforce, and the car will have a low coefficient of drag. Details start with the green-­and­-white Quadrifoglio four-­leaf clover on each front fender. These sit above air extractors from which flow bold character lines that end at the rear door handles. The hood also has air vents that conform to a V shape that begins with the dominant triangular portion of the trefoil grille.

Overall, the look is unique and menacing, but from some angles the front view can appear too wide and slightly awkward. The lower portions of the front grille would also be better served by metal mesh than what looks like plastic. 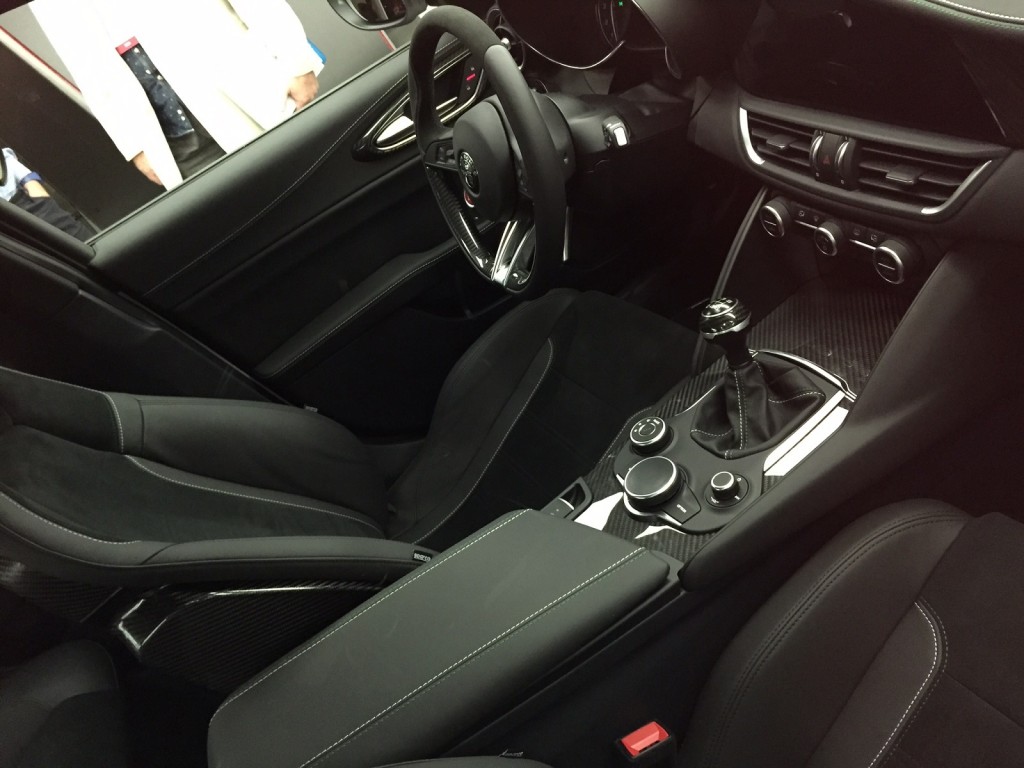 Alfa shared very few interior details but emphasized that the cabin is centered on the driver. The steering wheel is small and sporty, and, like the tiller of a Formula One car, it is home to several controls. The center console houses a BMW iDrive-­style control knob as well as the brand’s familiar DNA selector that drivers use to choose from Dynamic, Natural, Advanced Efficient and Race modes. As befits the class, premium materials spruce up the cockpit, including carbon fiber, wood, and quality fabrics. To save weight, the sport seats employ carbon fiber frames. We weren’t given access to the interior, but the long wheelbase suggests that rear seat space could be generous for the class.

Giorgio Is A Plan, Not A Platform

Journalists, including us at Motor Authority, have speculated that the Giulia’s platform is called Giorgio. That’s not true. Giorgio is the internal name for the expansion plan that will see eight new Alfas by 2018.

Unveiling the Quadrifoglio first is like showing an M3 as the next BMW 3-Series. Yes, the basic design is there, but the performance goodies are probably exclusive to the high-end model. A base Giulia will be part of the lineup as well. Alfa Romeo hasn’t said what engine it will get, but we suspect it will be a turbocharged four-cylinder with at least 250 horsepower. Ranieri says both models will hit U.S. showrooms in the first half of next year, with the Quadrifoglio coming first. The timing leads us to believe that the Giulia will be a 2017 model. Pricing will be released closer to the on-­sale date, but expect the base car to start in the mid-­to-­upper $30,000 range and the performance model to approach $70,000.

Ranieri says the platform is scalable, which means it can be lengthened and widened. He also confirms that the Giulia’s platform will play host to a crossover next and then to a larger sedan. More of the promised models of the Giorgio plan may also come off this platform, but that is not yet confirmed. One car that won’t be part of Giorgio is the Mazda MX-­5 Miata­-based product that was rumored to be an Alfa. Plans now call for that car to be a Fiat.

If what Alfa Romeo says is true, the Giulia Quadrifoglio will offer an exhilarating driving experience. It certainly has all the mechanical goodies to deliver on that promise, and that bodes well for building a sporty reputation in the United States. However, like the BMW M3 it aspires to challenge, the Giulia Quadrifoglio will have a limited audience due to its price and overtly sporty character. The more important version will be the base model. If it can develop a reputation for sporty dynamics with an Italian flair at a reasonable price, it can find an audience and help Alfa Romeo reach its stated goal of 400,000 annual worldwide sales by 2018 (last year Alfa sold only 68,000 units). However, the cars will also have to prove reliable and Alfa will need to expand upon its current network of 120 dealers. That will take some serious work, but Alfa Romeo appears to be serious about a renaissance for its brand.