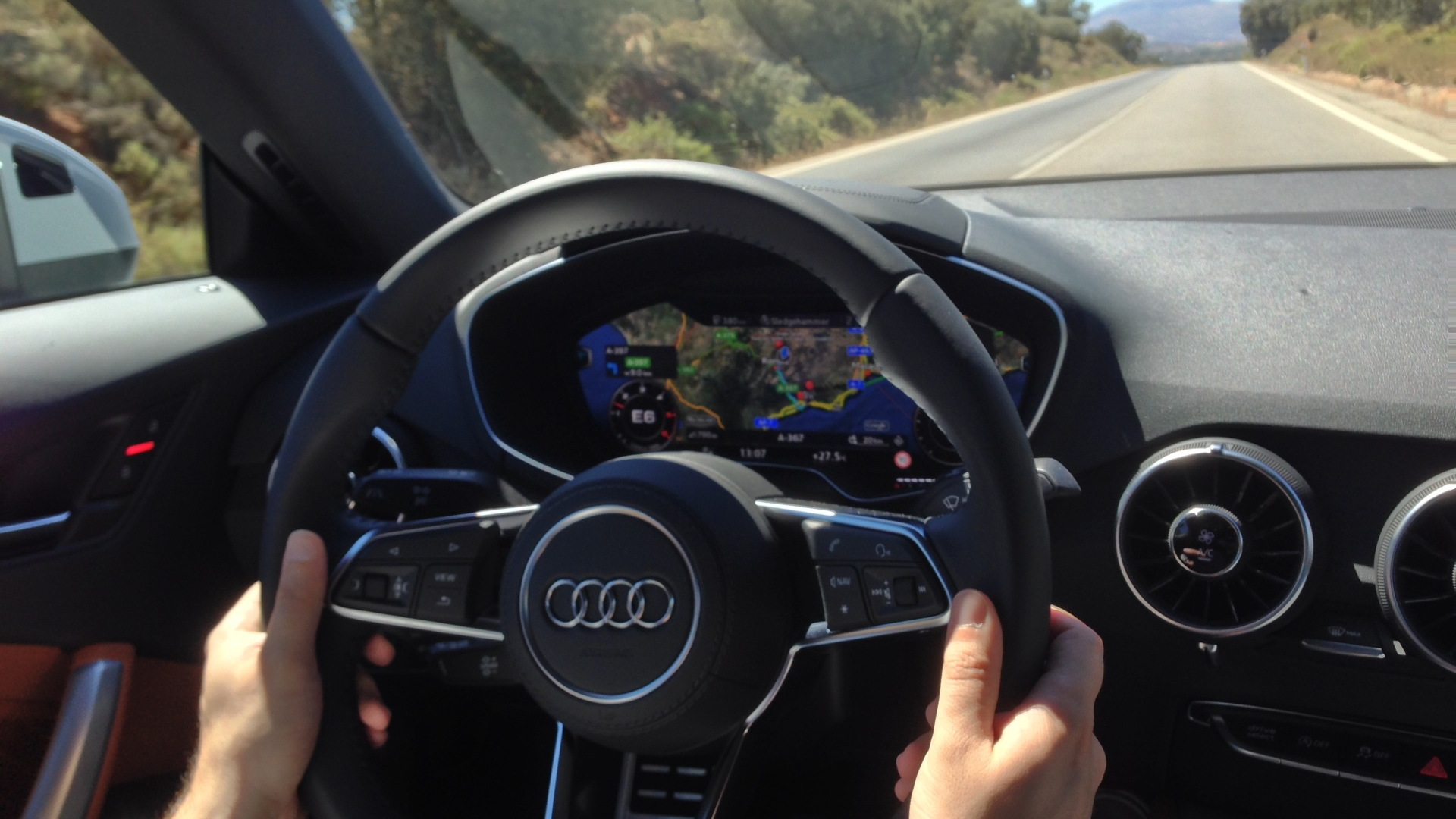 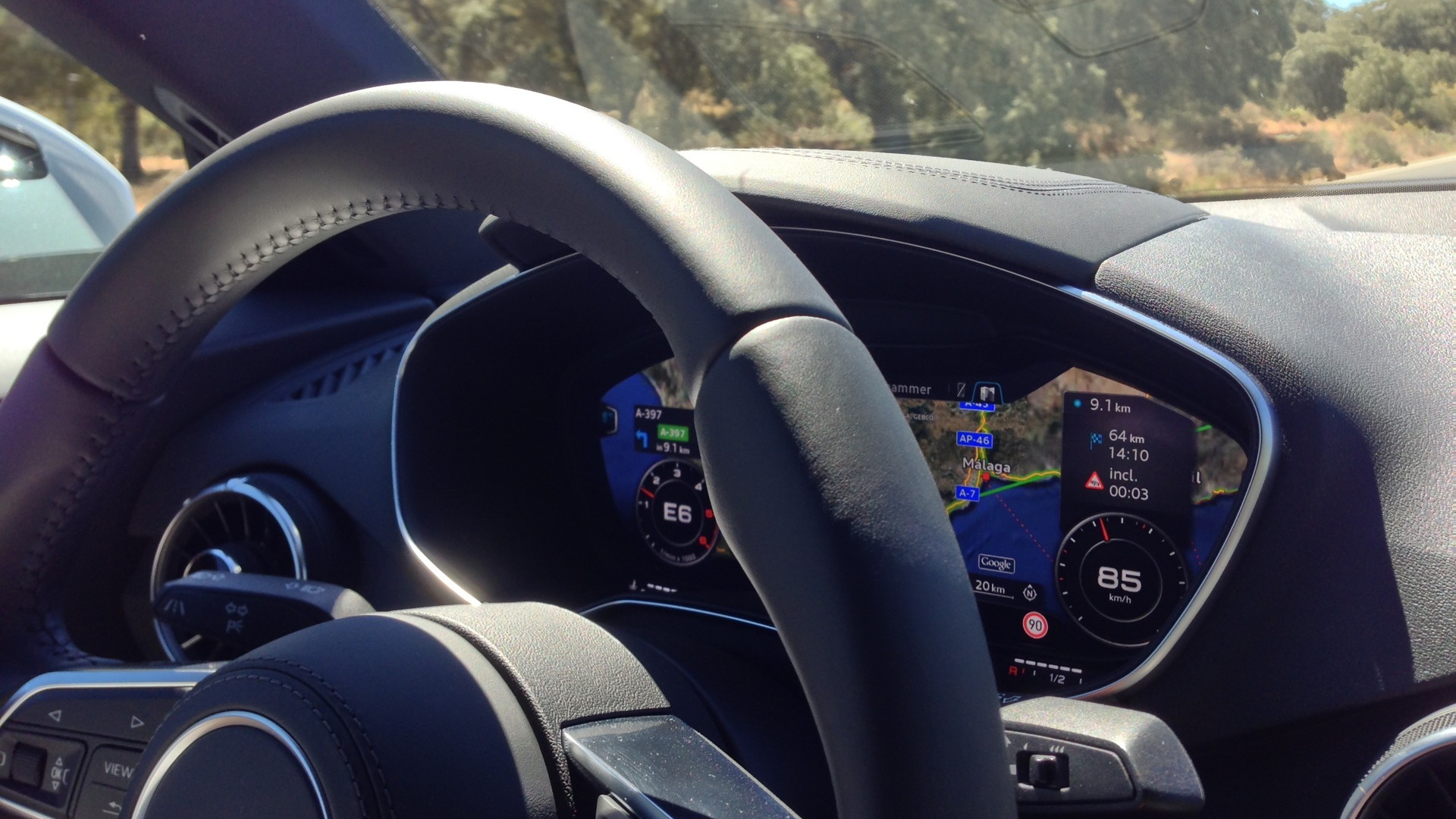 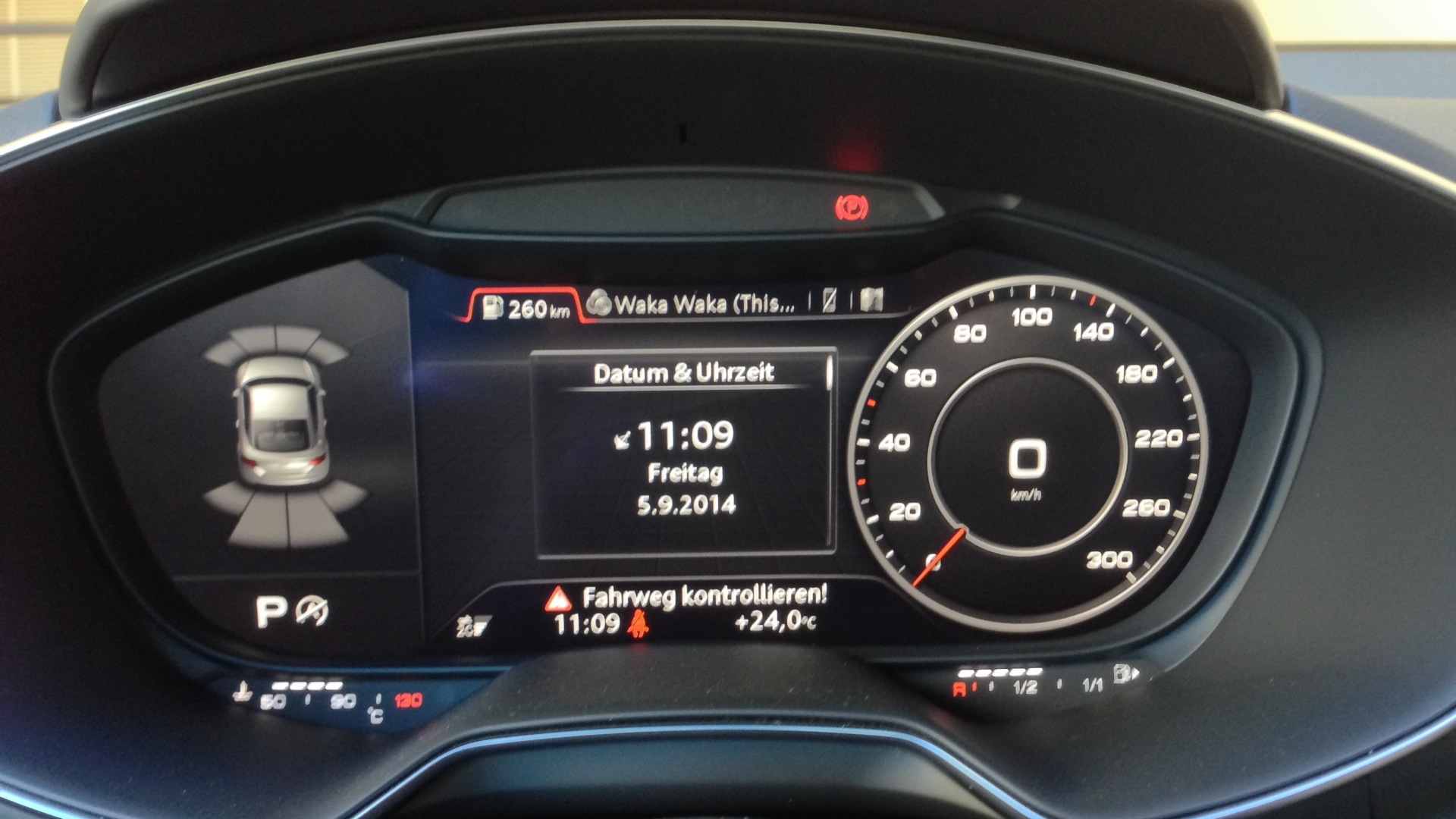 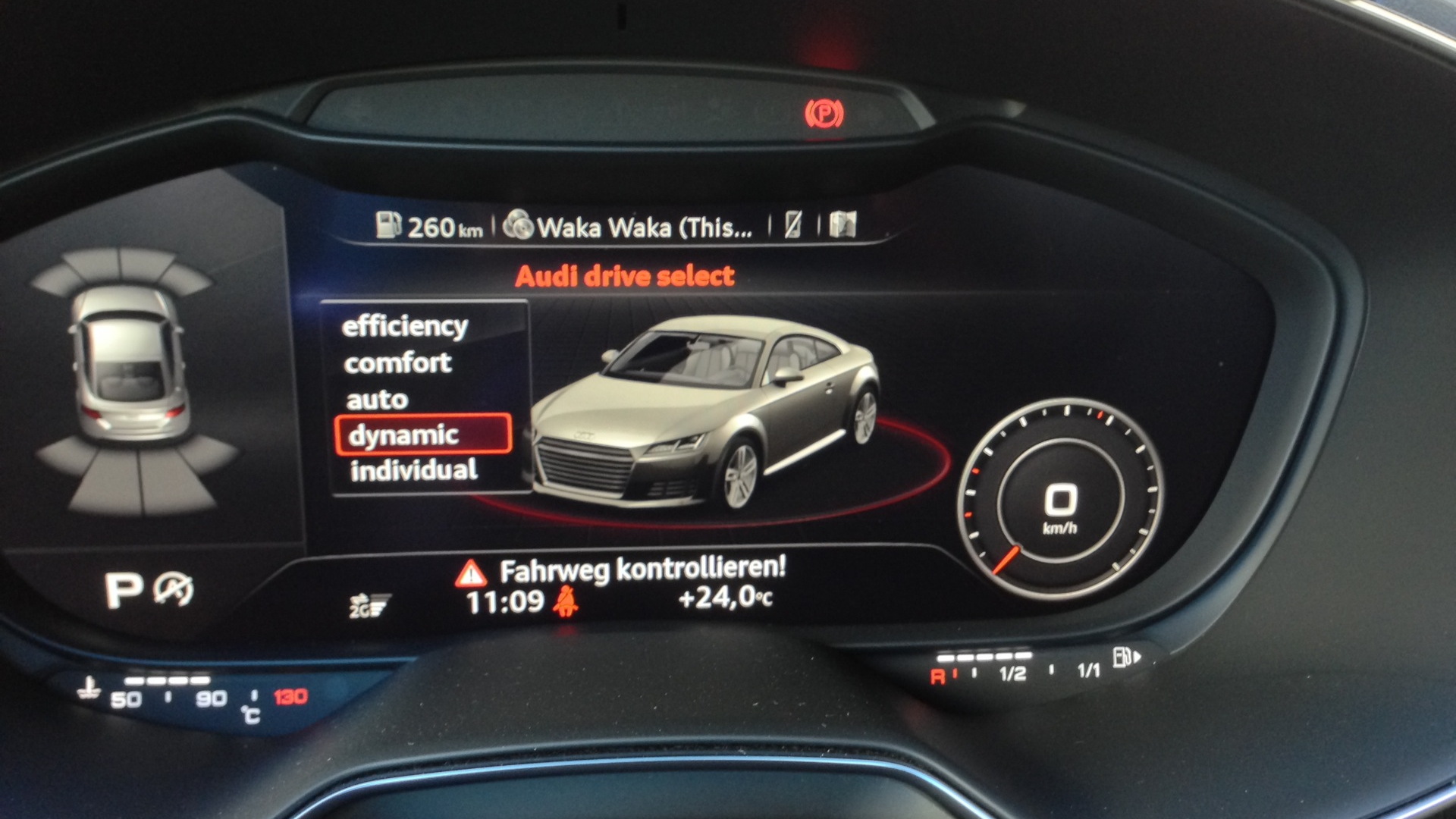 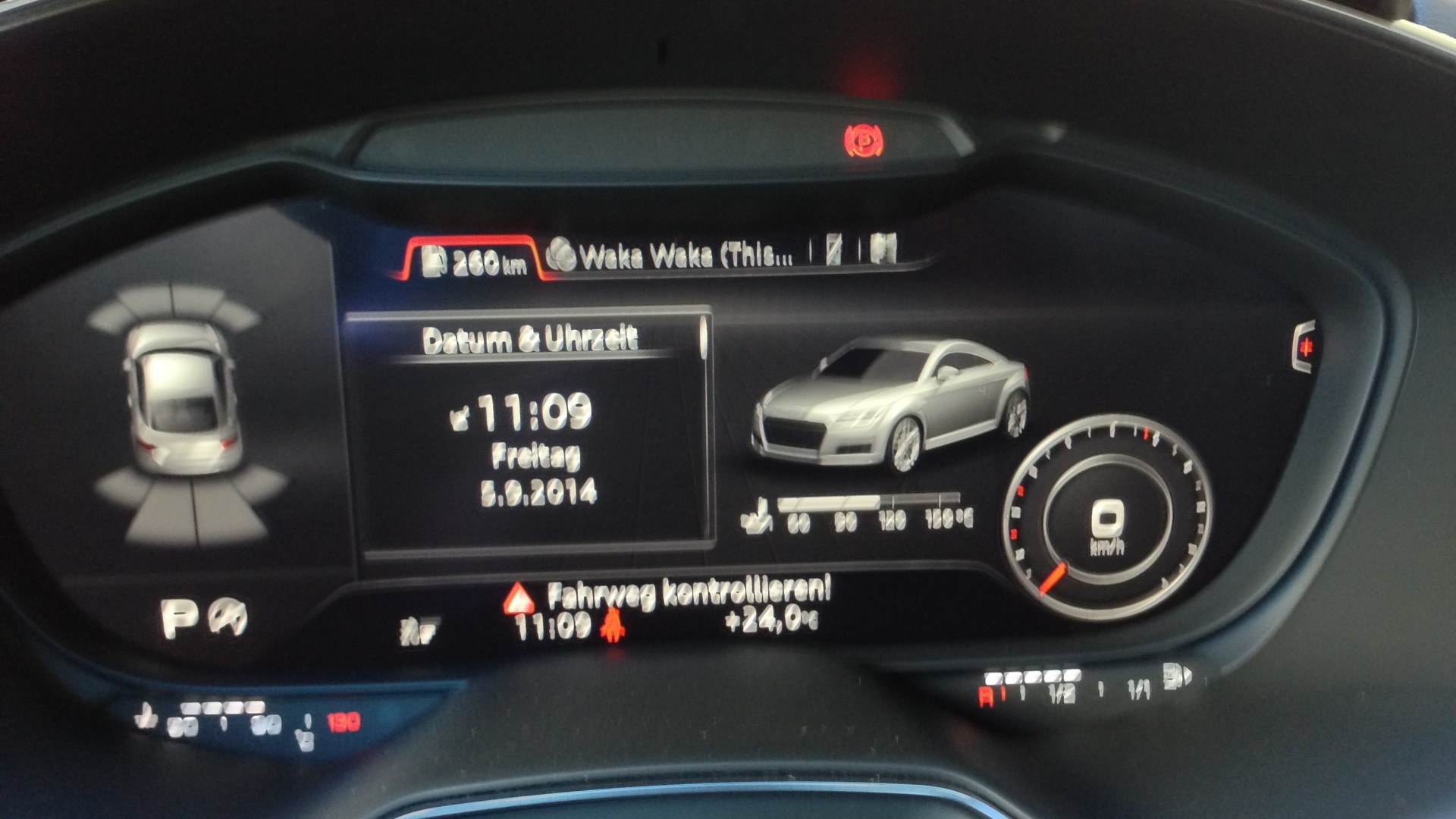 13
photos
We have seen the future of the in-car interface—or at least a major part of it—at Audi, and it's in the 2016 TT Coupe and Roadster slated to arrive Stateside next summer.

In modern cars, the era of the infotainment system has ushered in—and enabled—some fresh new design approaches. As some lesser-used functions are consolidated to touch screens, controller clicks, or voice commands, and some more frequent functions move to steering-wheel toggles, the number of small buttons and knobs on some new luxury vehicles is drastically lower than just a few years ago.

Beginning with the 2016 TT (including both the TT and TTS Coupe models we drove this past month and the TT Roadster lineup just recently detailed), Audi is taking its long-evolved Multi-Media Interface a dramatic step into the future—entirely by skipping the infotainment screen in the middle of the dash, and instead bringing it right in front of the driver.

And if you don't think that's radical enough of an idea in itself, this new, so-called virtual cockpit completely replaces the conventional gauge cluster itself. All 2016 Audi TT models models will get a 12.3-inch display instead of gauges. It’s not a touch screen (that would be awfully awkward to reach through the steering wheel), but it's essentially one super-wide-screen (1440 x 540) display, with colorful, high-contrast sharpness. You can click through two different core gauge views—or a third in TTS models, with a large tachometer and a digital speedo in the middle.

There isn’t even a conventional display panel for the climate controls—instead, the large round vents, which twist and press for various functions, have smaller displays in their center, for temperature, modes, and fan speed.

No lag, and quick to update

It’s all powered by the latest NVIDIA processing technology, and Audi boasts that it had a no-lag, no-latency target in development, which it achieved (you can’t see any screen-update lag when you blip the accelerator and rev the engine, either).

The theory behind it makes pretty good sense. You can control the system from a low center-console controller, much as in Audi's other models, or with expanded voice controls, or even with an MMI touch scratch pad that has a predictive search feature, letting you trace out characters to quickly select anticipated contacts or destinations. You use the left toggle on the steering wheel to make root menu choices, while a right toggle navigates through case-dependent choices. Even in its 'navigation plus' form, MMI now has only six physical buttons.

We were recently able to spend some hours with the system, while getting our first drive of the 2016 TT, and we ended up with a mostly positive impressions. The system is quick and always just off the line of sight, and we had an easier time manipulating it with the steering-wheel toggles than with the twist-and-press controller in other Audi models (you still get that, and the MMI Touch feature, that lets you scratch out individual characters).

Some usability issues—especially from the passenger seat

There are a few issues we see with general usability. If you're following navigation directions, the scrolling of the map can be tough to follow, given the screen’s very wide, very thin display; and if your passenger wants to play DJ or help with navigation directions, well that’s pretty much out of bounds. It’s driver-centric to an extrement, and that definitely won’t be for everyone.

The TT definitely isn’t the only one to get the virtual cockpit. Officials recently hinted that the virtual cockpit interface is headed into the next-generation of the R8 flagship sports car, due next year, and likely as a 2016 model. As the automaker stated in a release from last year, “Audi intends to tailor the skin – the digital instrument’s graphical user interface – to the character of its future models; it will become dynamic in the case of a sports car, while it will come across as somewhat more serene with a large sedan.”

Virtual cockpit going solo on sports cars, will complement on others

Company officials added that in sedan and crossover applications, the virtual cockpit won’t “go it alone” as in the TT and future R8; on those other Audi models we’ll see many of the same functions in the virtual cockpit, but some level of redundancy with a centrally located screen. Think something more along the lines of the high level of reconfigurability you can get in the gauge cluster, to complement the main screen, with Cadillac’s CUE interface.

While those fundamental functionality issues are going to persist for some, we found the virtual cockpit setup to make a lot of sense once we were used to manipulating the menus and accessing some of the split-screen views.

And the effect on design can’t be underestimated. This has allowed designers to implement a look for the dash that’s less visually busy. Considering all that’s packed in and accessible by the driver through fingertips or voice commands, it’s at the leading edge of what’s hopefully a less cluttered future.