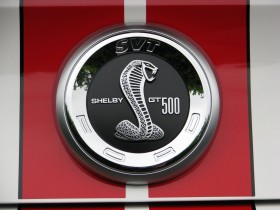 There's not much new on the docket for the 2012 Ford Shelby GT500 aside from a few price tweaks--and that's a good thing. At least, that's what a leaked buying guide for the car, turned up on a Mustang fan site, reveals.

We liked the 2011 Ford Shelby GT500 so much, we nominated it for our Best Car To Buy award, and though it didn't win, it's still every inch the American M3-killer. Priced right on top of the German, but striking a much different balance of price, performance, and pulchritude, the GT500 lays waste to the $50,000-range if you're after serious speed.

That $50,000-range stays intact for 2012, with the exact same base pricing on the Coupe at $49,495 including destination charges, and the Convertible at $54,495. The same options, including the must-have SVT Performance Package, Recaro leather sport seats, glass roof, electronics package, and Shaker 1000 10-speaker stereo remain as well, though the price for the SVT package jumps $500 from the 2011 to 2012 model. A range of axle ratios and wheel type are also available.

For the full buying guide in PDF form, hit the link below.