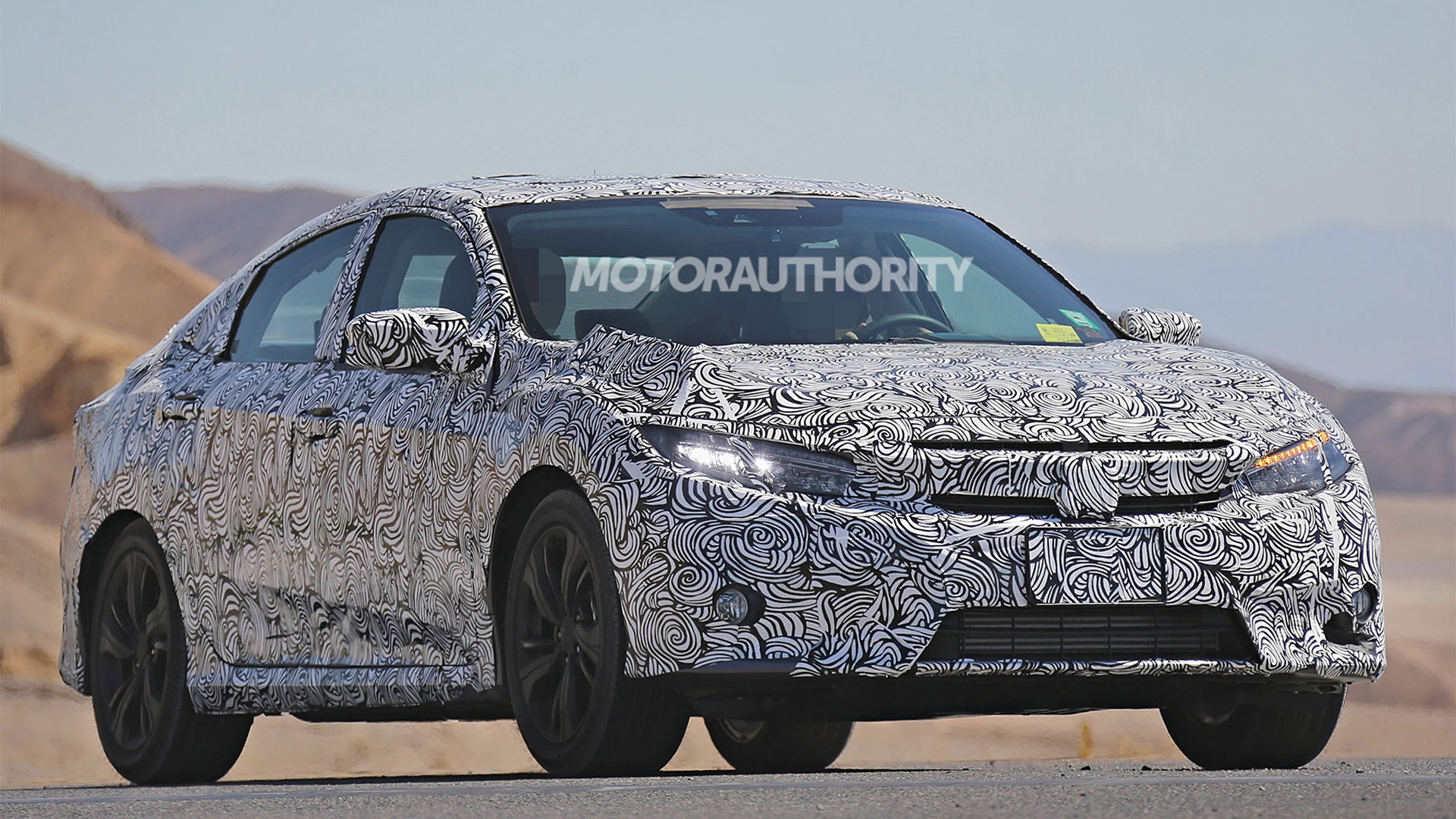 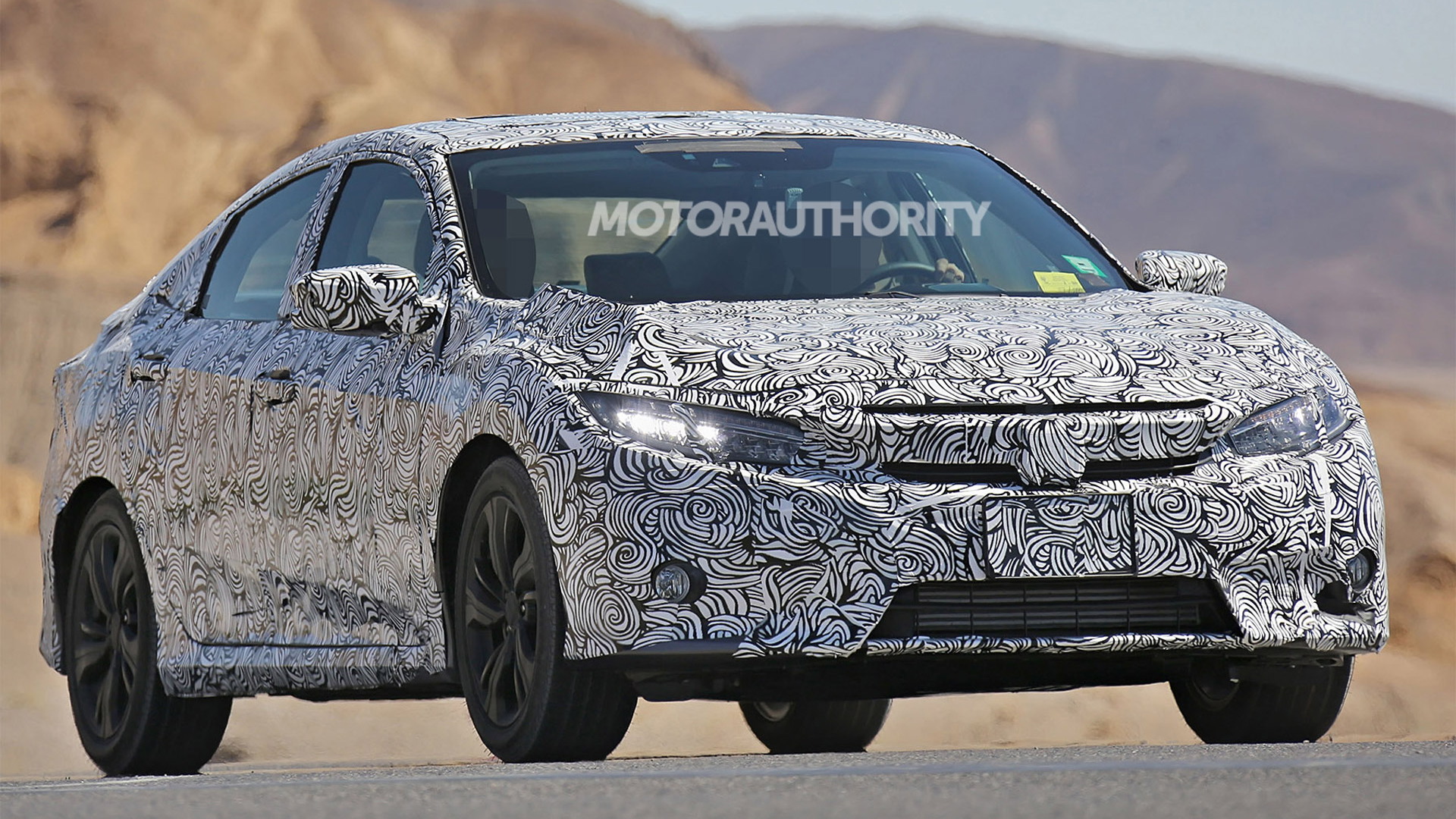 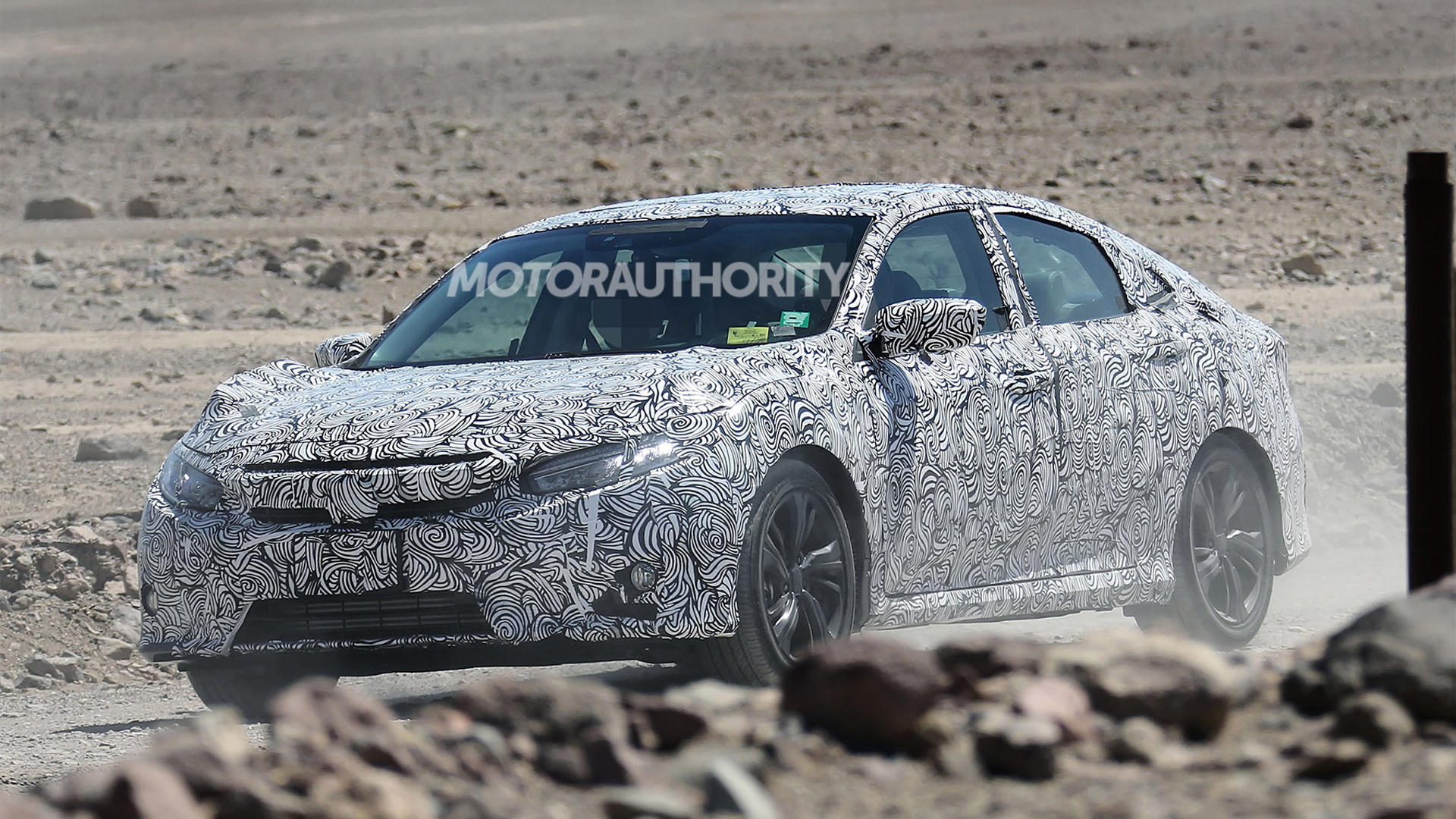 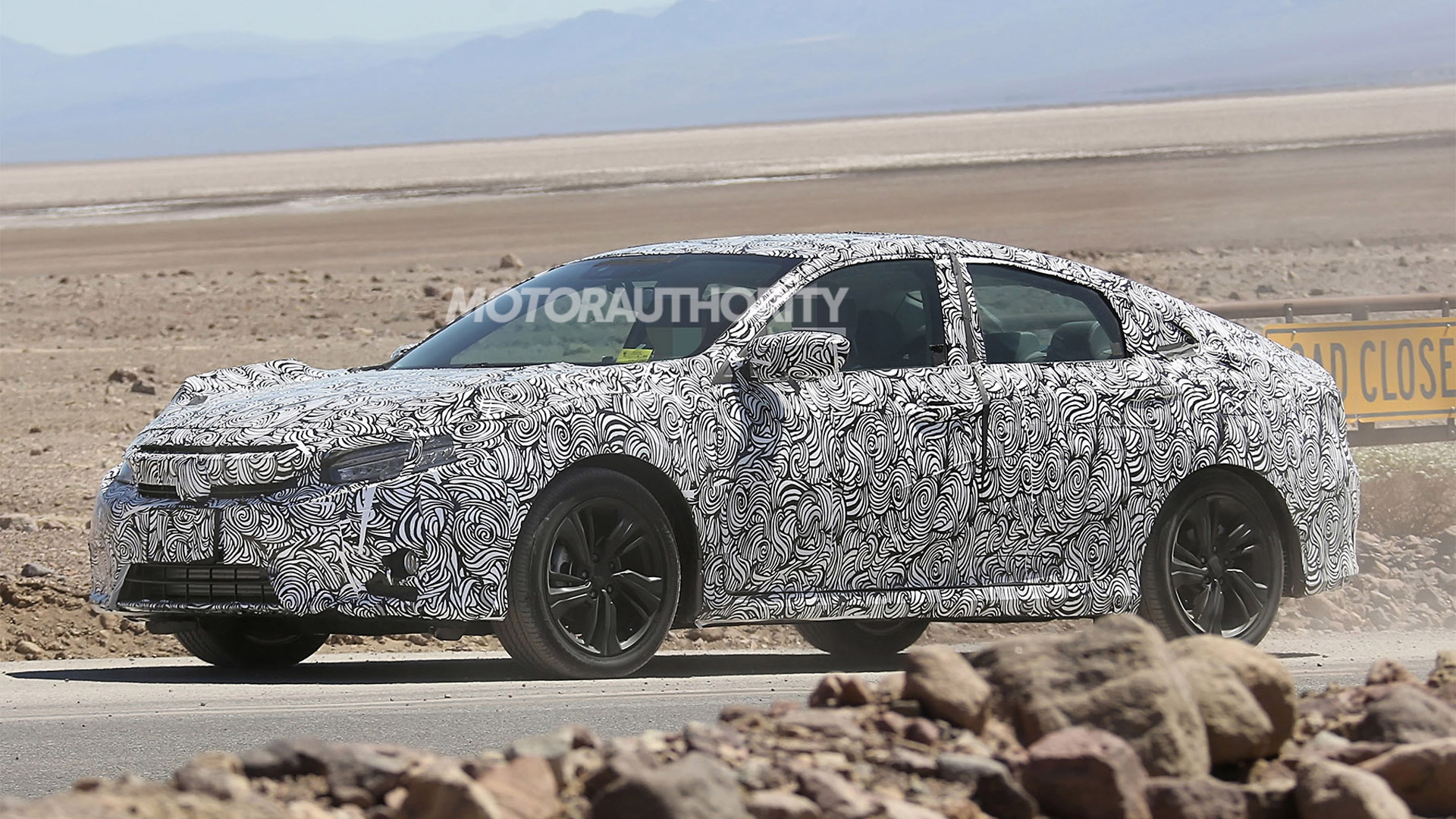 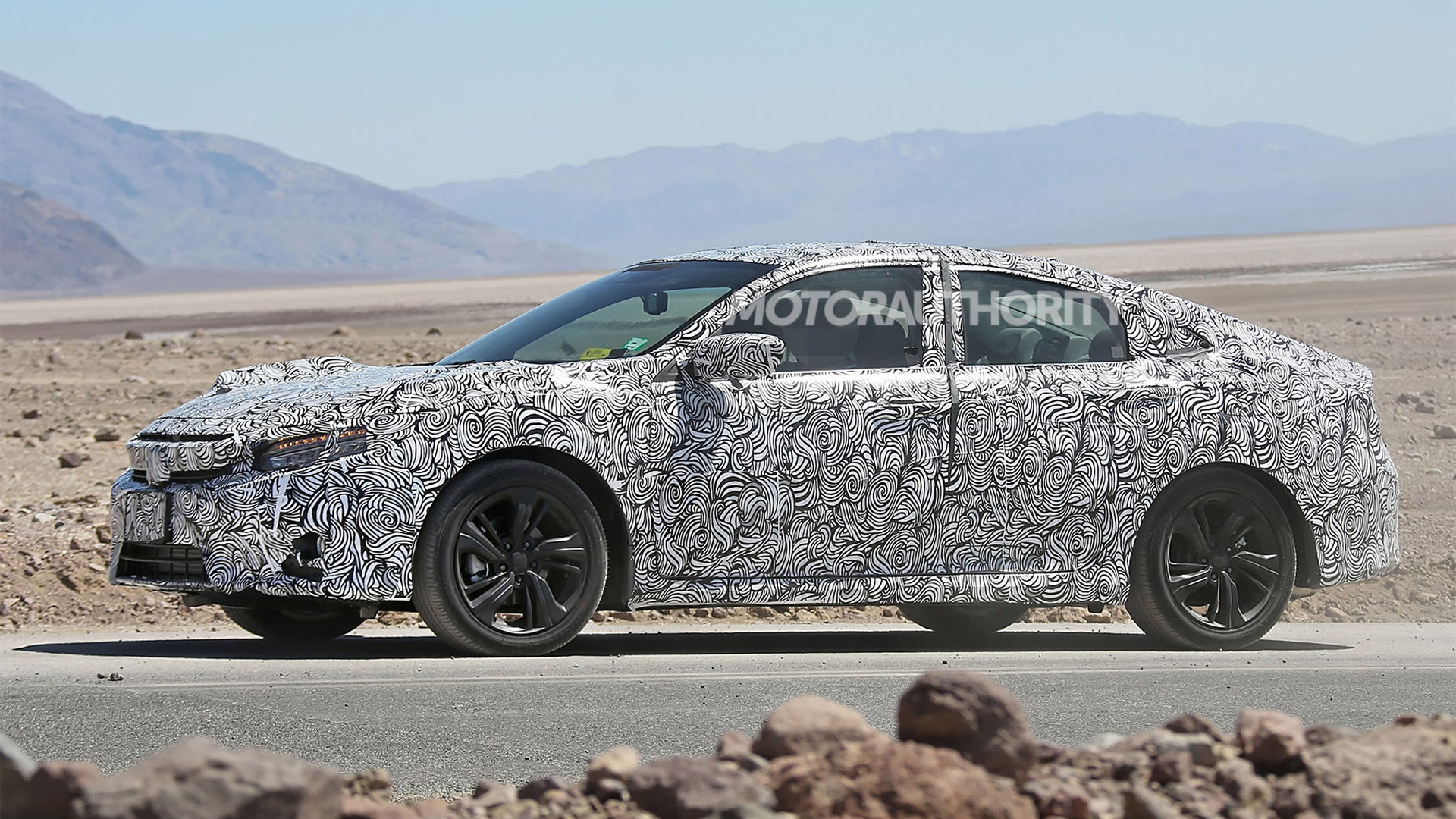 Honda gave us an early look at its all-new, 10th-generation Civic with the debut of the Civic Concept at the recent 2015 New York Auto Show. Although a coupe, the concept hinted at the styling expected for new versions of both the Civic sedan and Civic Coupe and possibly a new Civic Liftback model as well. A Civic Hatchback based on the European-spec Civic will also be available. This one is the basis for the high-performance Type R.

We now have new spy shots of a prototype for the Civic sedan which has been confirmed for sale this fall, as a 2016 model. Leaked patent drawings already reveal the look of the exterior but these latest spy shots give us a glimpse at the interior. It appears that the general layout of the cabin will remain the same as in the current model, albeit with the two-tier instrument cluster of the current model replaced by a more conventional single-cluster design. There are also more buttons on the center console and the infotainment display screen is now located below the central air vents instead of beside them.

This prototype is fitted with a continuously variable transmission but a regular six-speed manual will be offered, most likely as the standard option. As we’ve already reported, the standard powertrain in the new Civic range will be a turbocharged 1.5-liter four-cylinder engine with VTEC variable valve timing. More potent variants like the familiar Si as well as the aforementioned Type R will receive a 2.0-liter VTEC turbo engine. With these new engines, Honda is targeting class-leading fuel economy for the new Civic, with EPA-rated highway fuel economy expected to surpass 40 mpg.

Looking once again at the spy shots, it’s clear the new Civic’s design is much sportier than that of the current model. This new sedan looks more like a four-door coupe, and from the rear the design is very close to what we saw on the striking Civic Concept. Up front, the lines resemble those on the latest Acura ILX, a car whose mechanicals are shared with this new Civic.