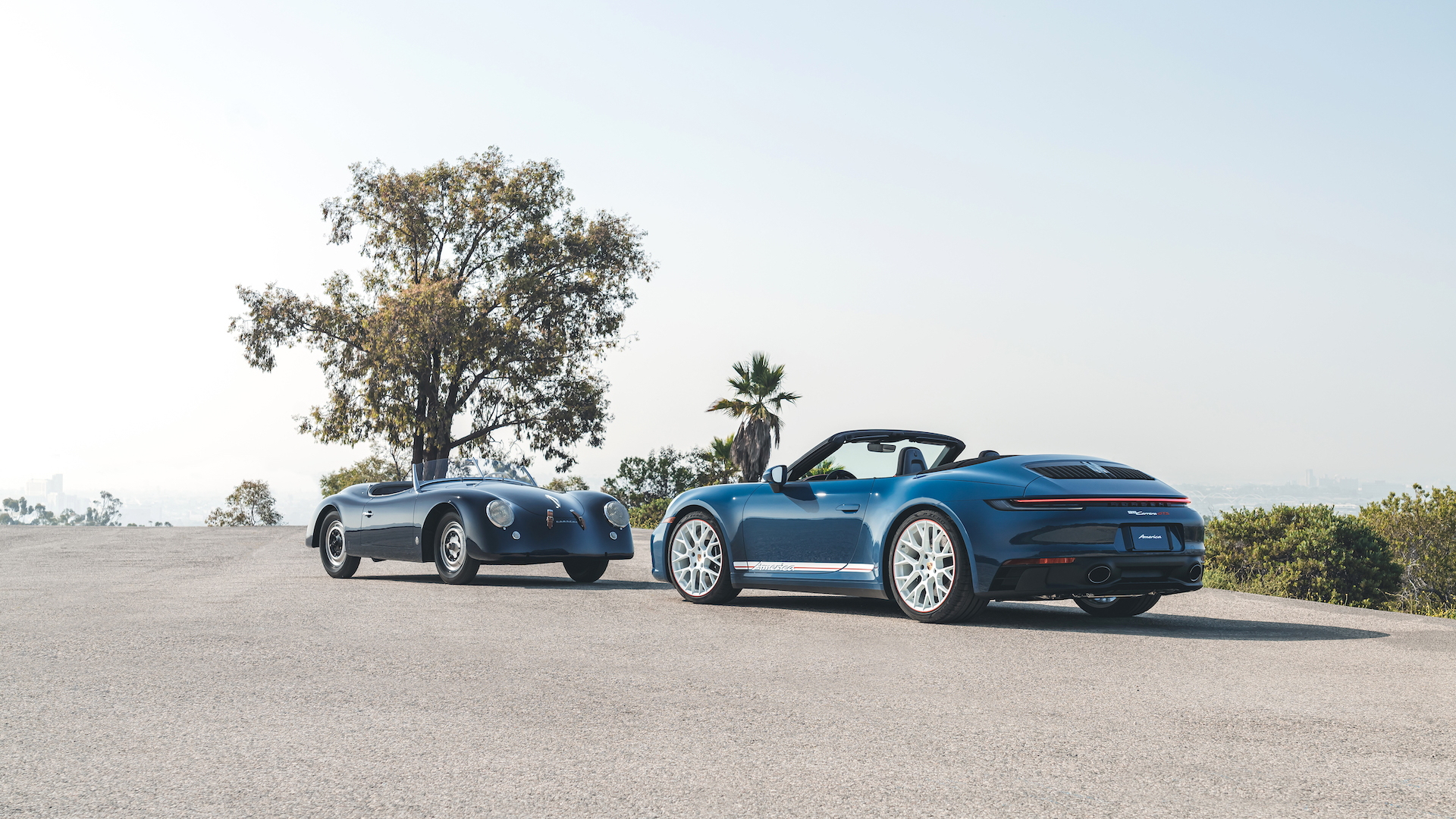 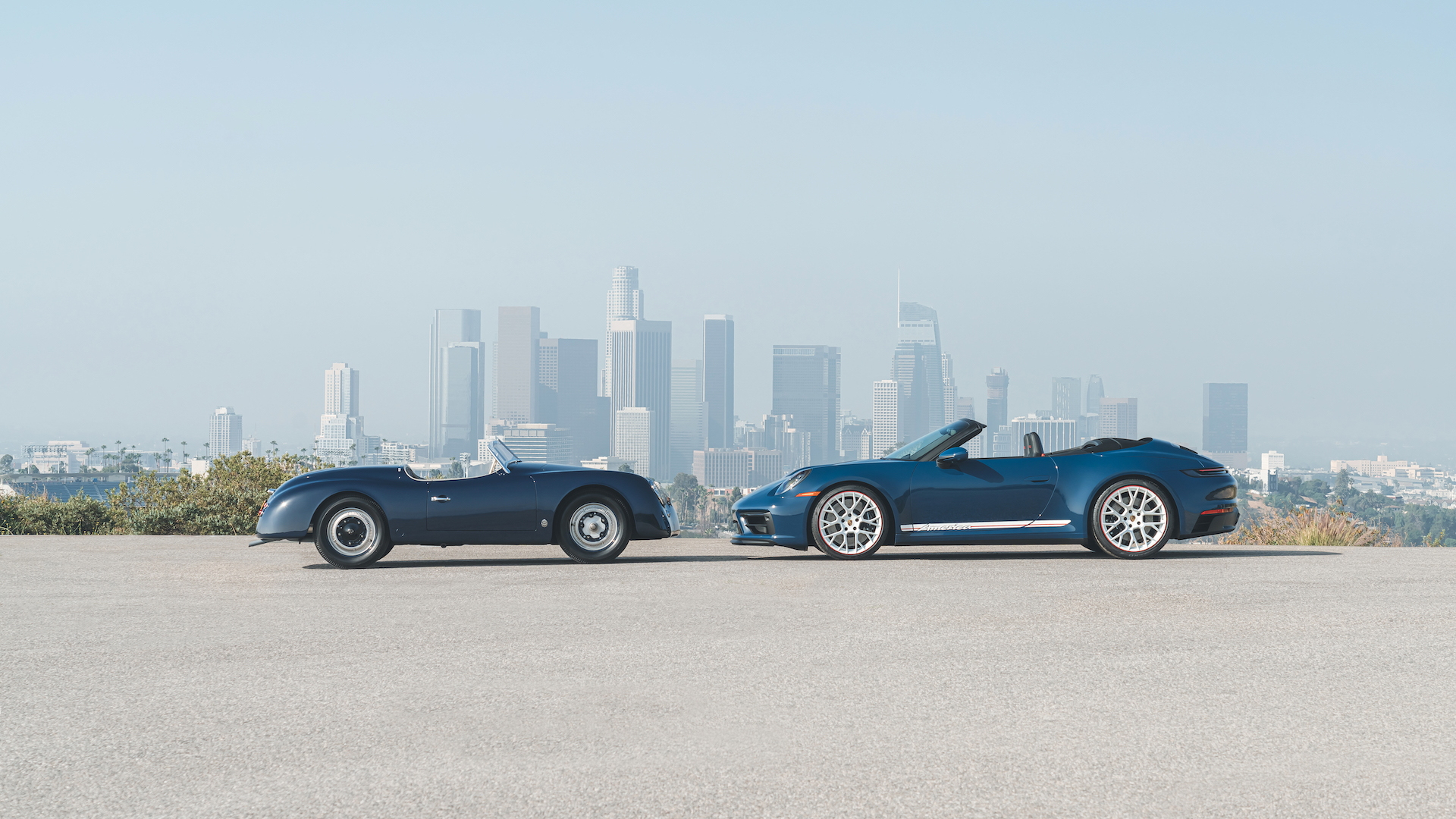 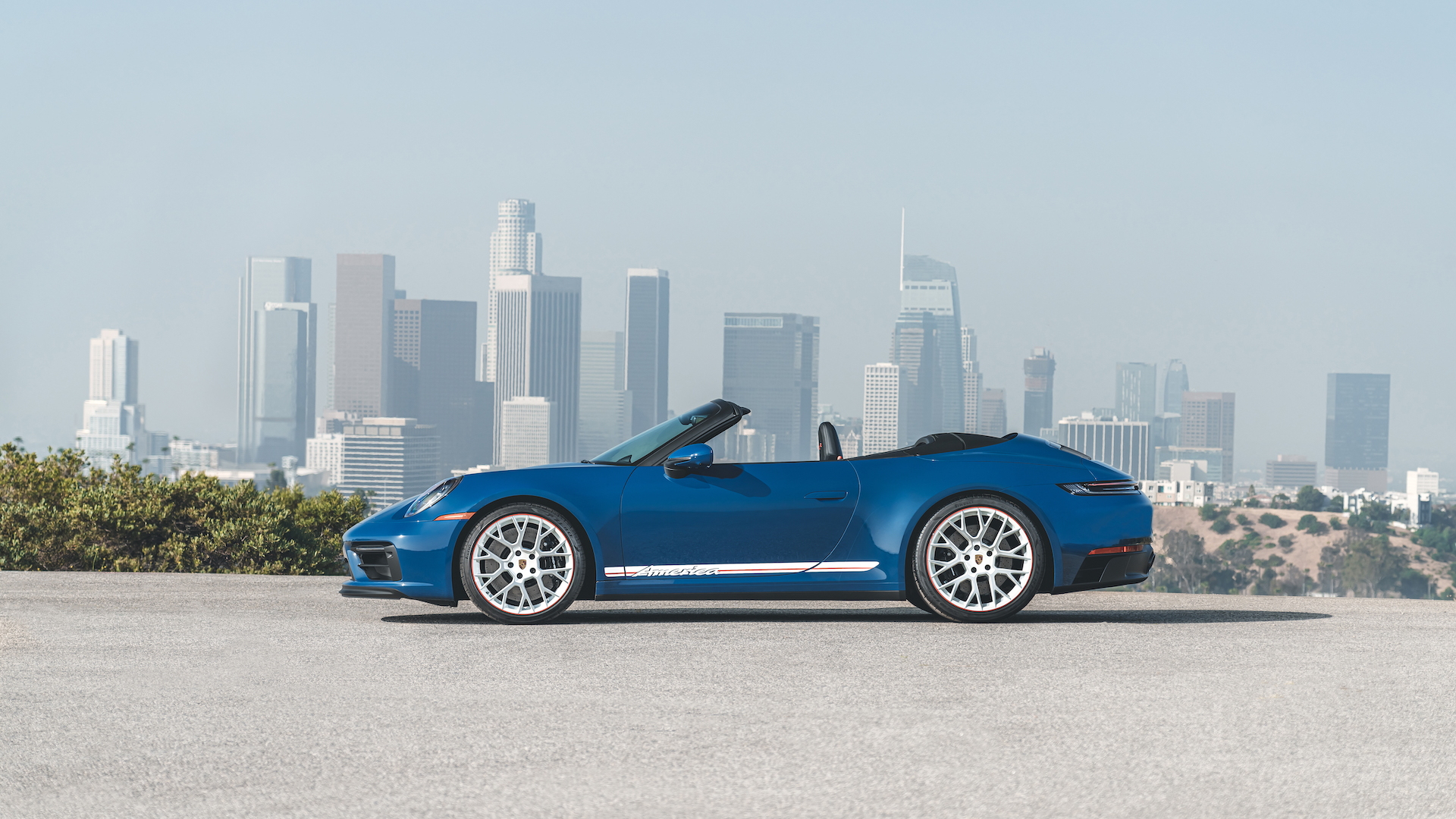 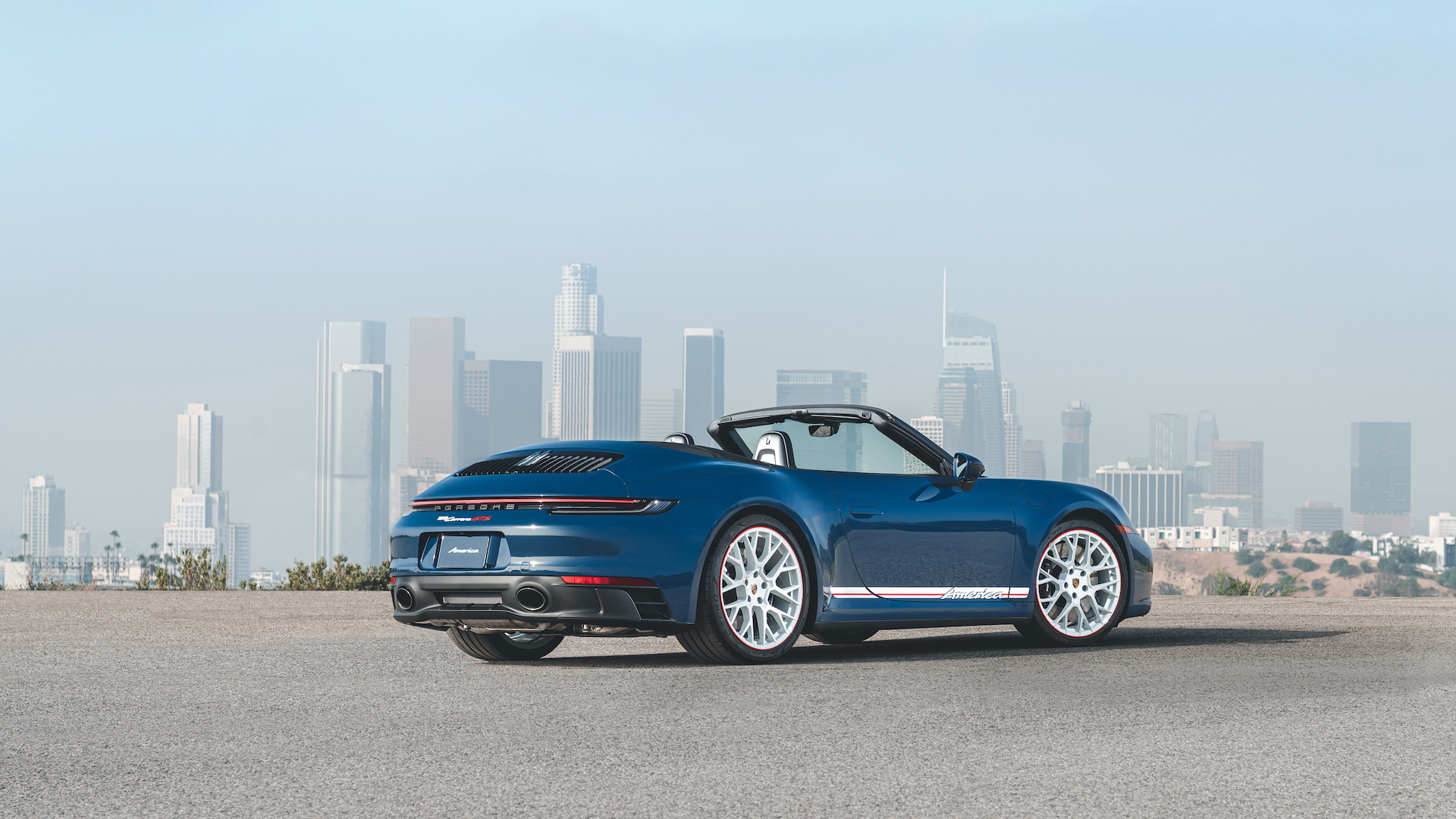 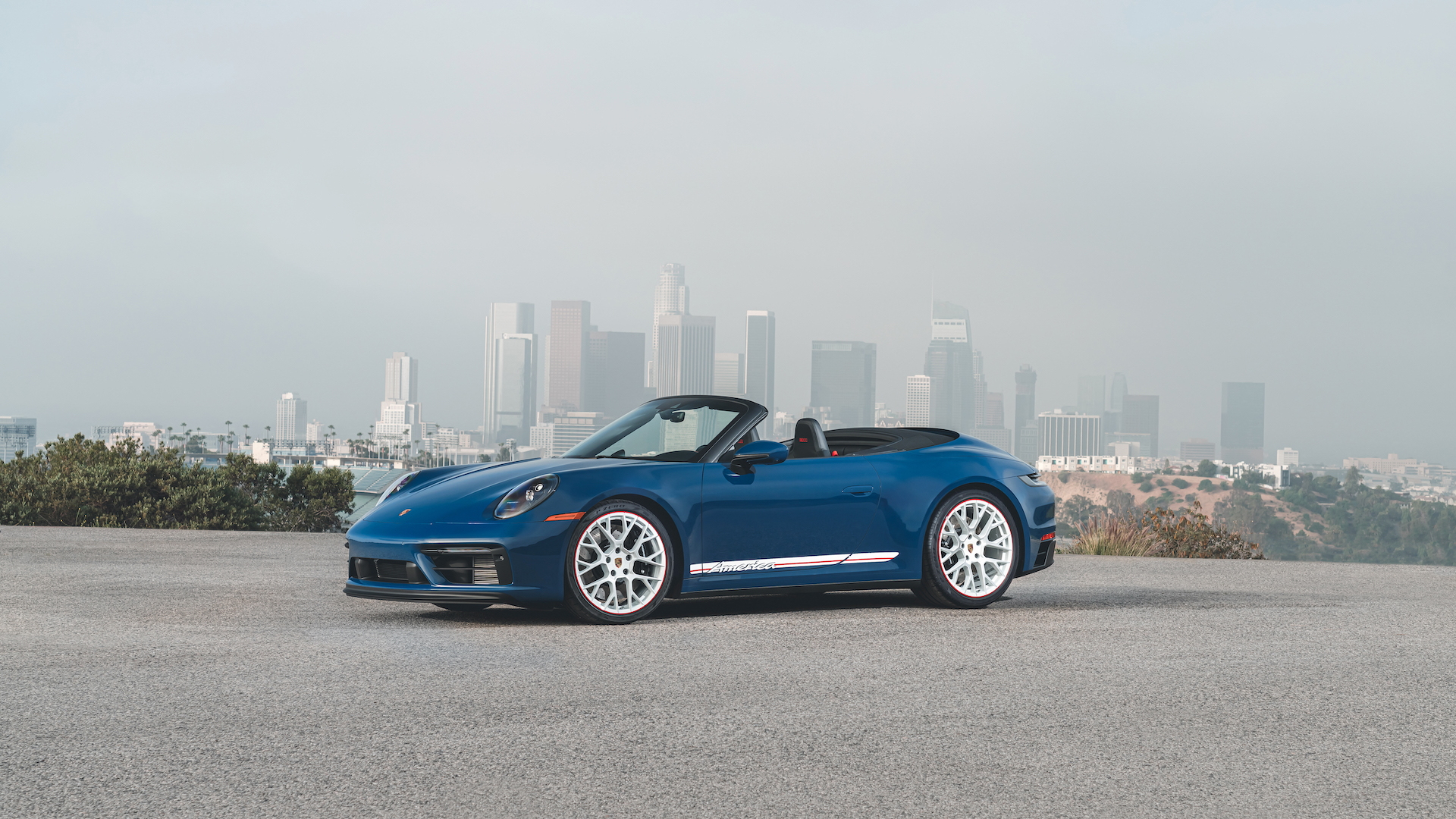 For the third time, America is getting its own 911, though Canada is honing in on the deal.

On Sunday at the Porsche Parade in the Poconos, the automaker revealed the 2023 911 Carrera GTS Cabriolet America Edition, appropriately in red, white, and blue, with a focus on the blue.

A limited-edition product with the aid of the Porsche Exclusive Manufaktur customizing arm, the America Edition is limited to 115 examples, 100 of which will go to the U.S. and 15 to Canada. Just announced on Sunday, no cars have been pre-sold.

This is Porsche's third America model. It started with the 1953 356 America roadster and continued with the Porsche released a 964-generation 911 America cabriolet in 1993. The company also offered a 911 RS America model in 1992.

Azure Blue 356 paint, exclusive to this model, covers the body. It's a throwback color inspired by a color used on 1953 Porsche 356 America roadster. White adorns the lower body "America" decals as well as the spokes of the RS Spyder Design wheels. The wheels also get red outlines and silver faces, which makes them the first Porsche wheels finished in three colors. Red also appears on the interior stitching, seat belts, GTS badges, and as an accent on the lower sill decals.

The windshield header has a satin black finish, which is also exclusive to this model. The black interior gets other special color flourishes, including a red and gray stitching and red-stitched "America" embossed on the seats. The door sill plates also commemorate the 70th anniversary of the 356 America Roadster.

The 2023 911 Carrera GTS Cabriolet America Edition gets no changes from the GTS model it's based on, though it comes only with the 7-speed manual transmission and rear-wheel drive. That means it's powered by a twin-turbo 3.0-liter flat-6 that makes 473 hp and 420 lb-ft of torque. It comes with adaptive dampers, a 0.4-inch lower ride height, helper springs on the rear axle, a sport exhaust, and the Sport Chrono package that adds an additional drive mode, active engine mounts, and a digital and analog dashboard clock/timer. The standard cast-iron brakes have black 6-piston front calipers that clamp 16-inch rotors and 4-piston rear calipers with 14.9-inch rotors. Buyers can also opt for carbon-ceramic brakes and rear-axle steering.