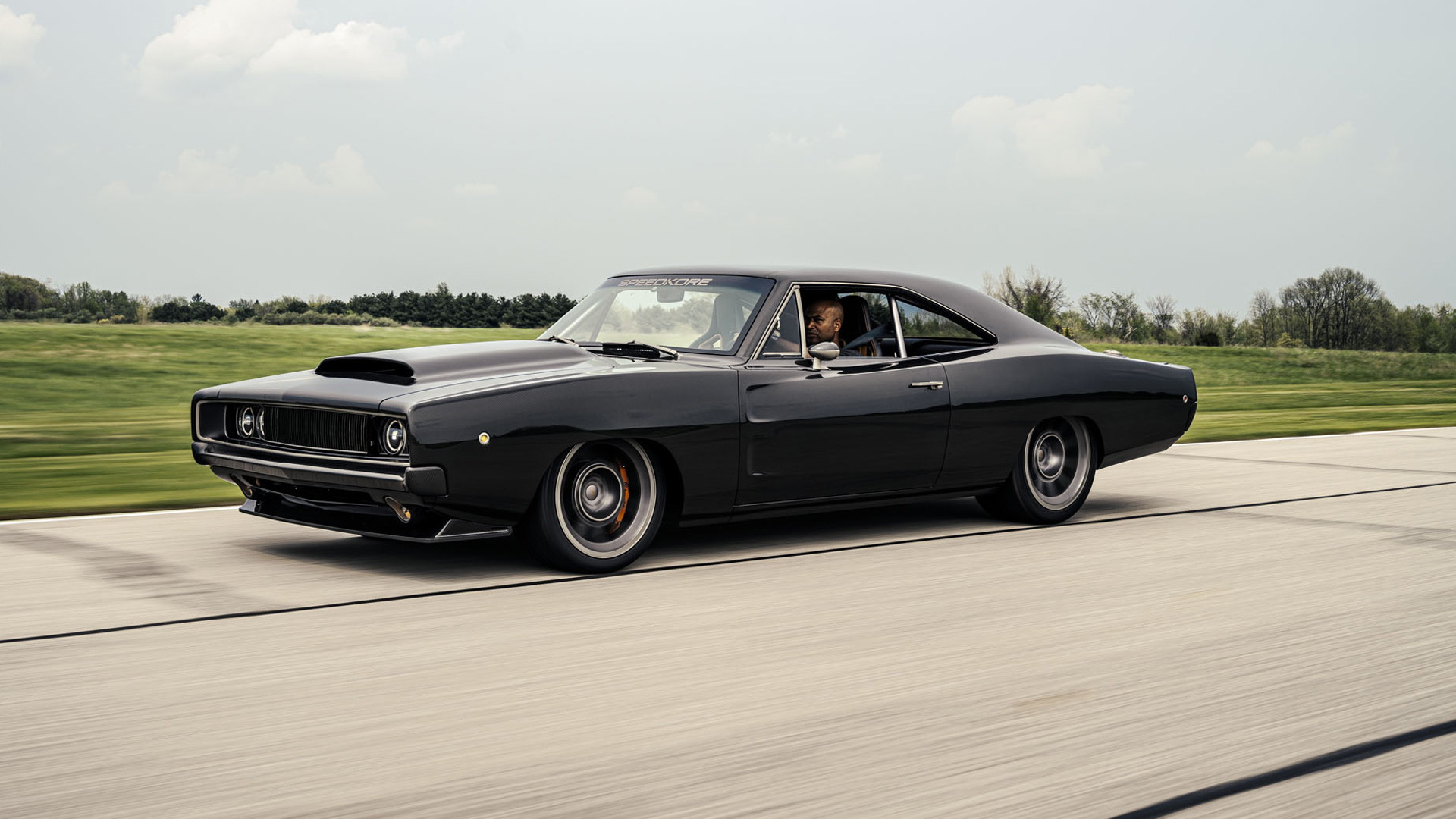 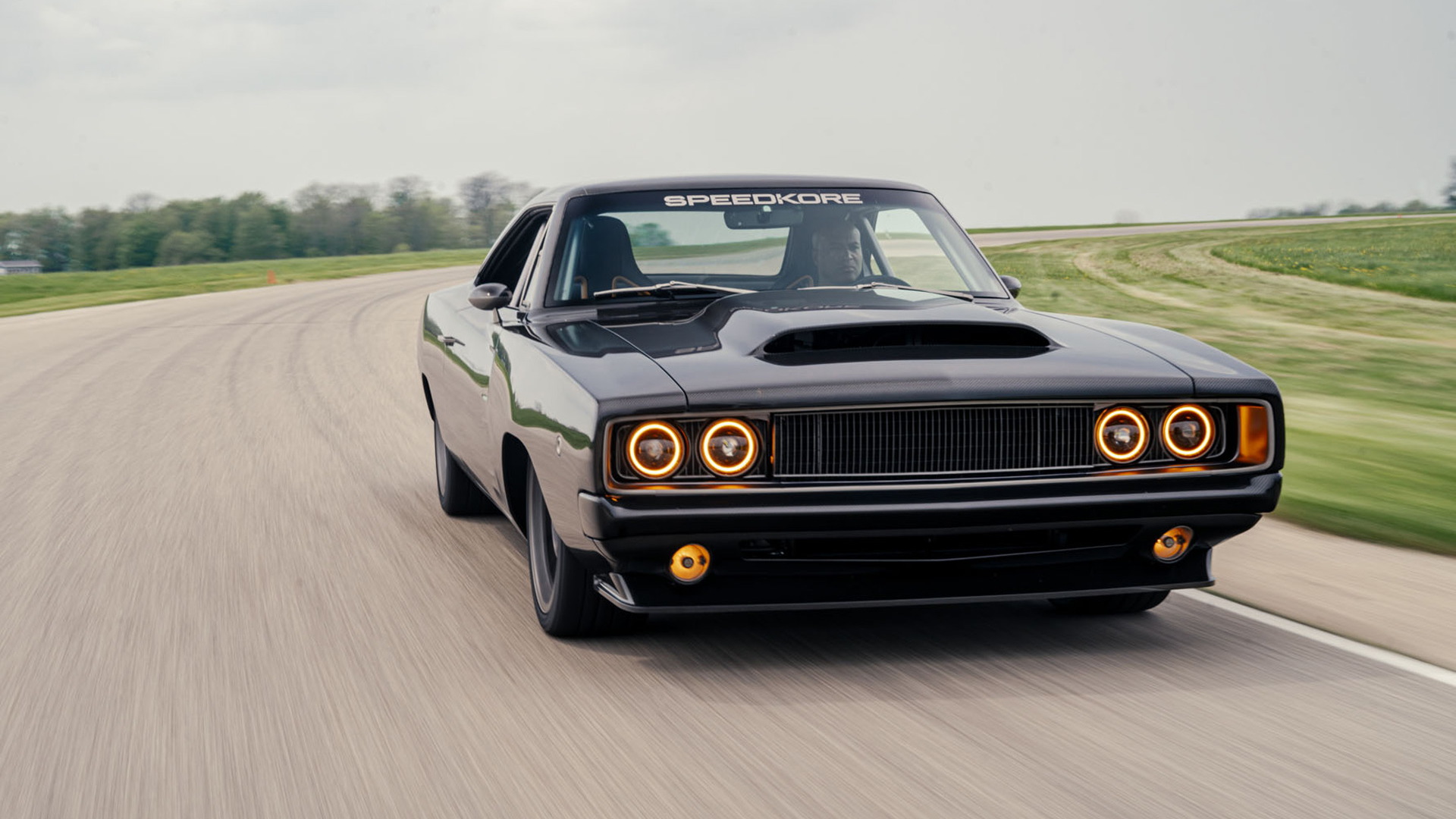 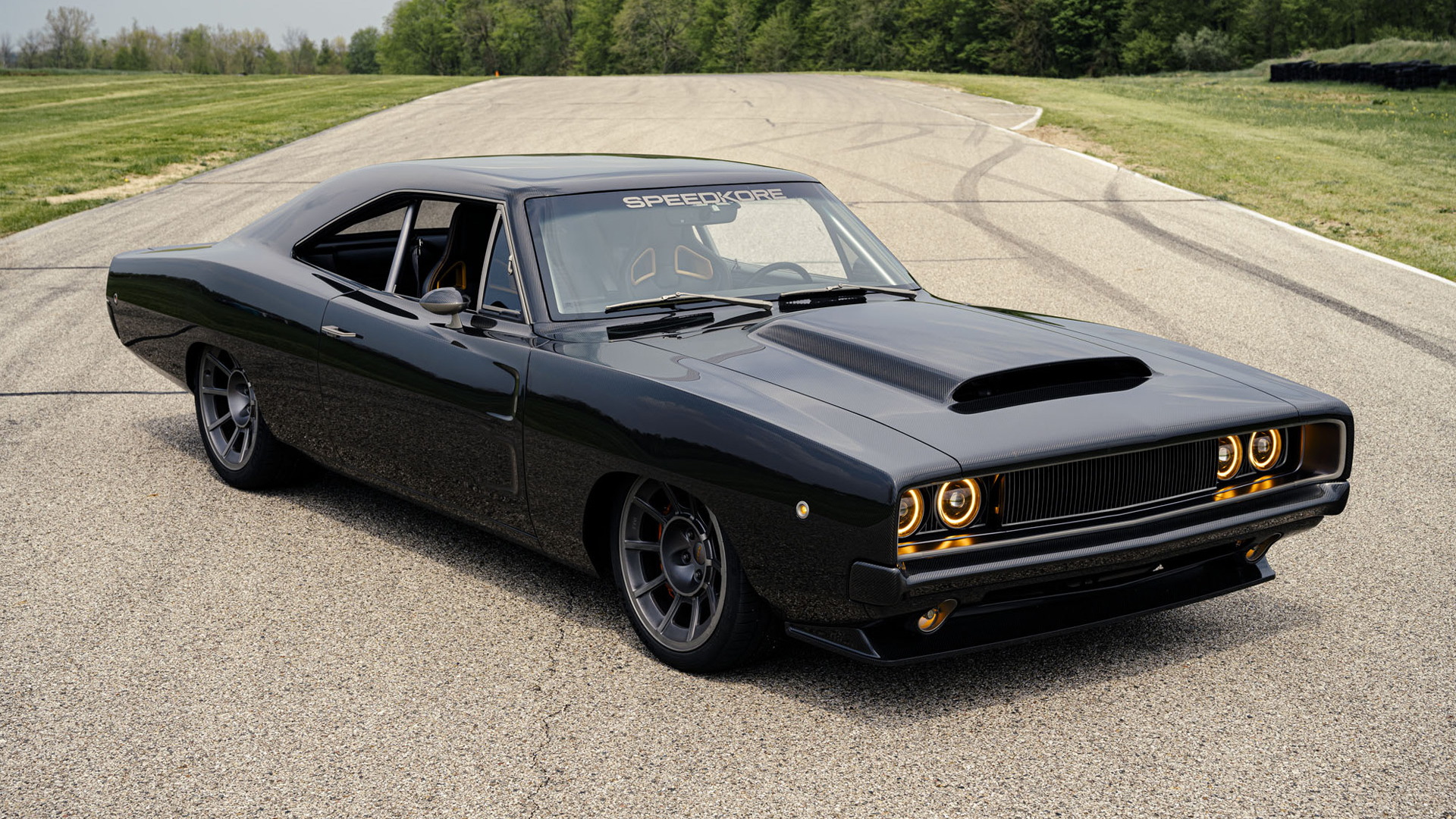 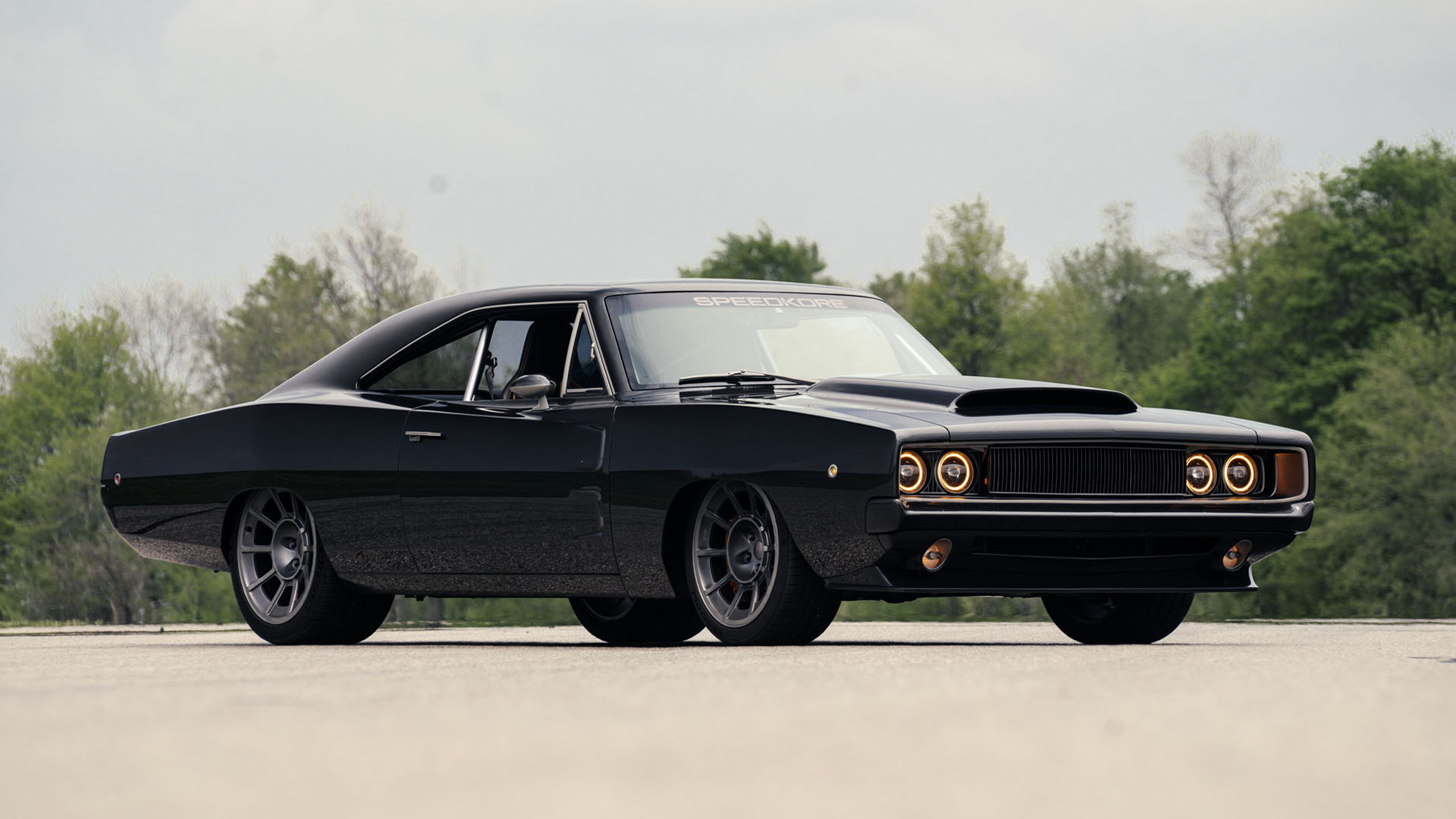 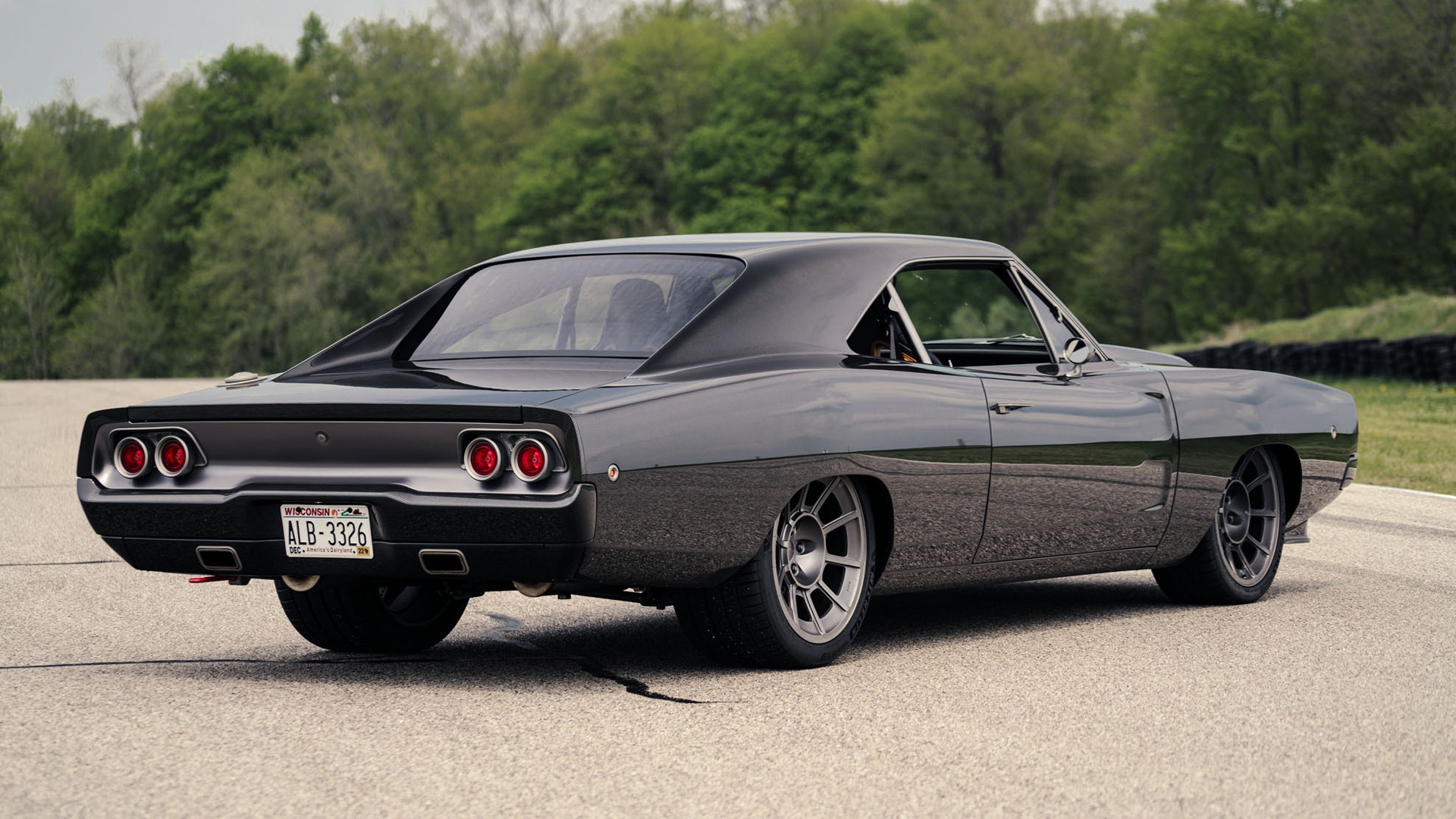 It's been more than two years in the making but now the SpeedKore Hellucination, complete with a 1,000-hp Hellephant V-8, has been unleashed upon the world.

The car is the latest creation of the wild wizards at Wisconsin's SpeedKore Performance Group and is based on a 1968 Dodge Charger. It was commissioned by none other than Stellantis Design Chief Ralph Gilles who described it as his “dream car.”

The Hellephant engine powering the car is a 7.0-liter supercharged V-8 related to the more widely known Hellcat. It generates a massive 1,000 hp and 950 lb-ft of torque and in the Hellucination is paired with an 8-speed automatic transmission and powers the rear wheels only. Those rear wheels are massive 20x12-inch custom HREs and are wrapped in 345/30-size tires. A pair of 19x9-inch wheels are found at the front and wrapped in 245/35-size tires.

A similar configuration features in a 1970 Charger that SpeedKore built for actor and comedian Kevin Hart.

Handling big power is certainly a talent at SpeedKore but the company's real claim to fame is producing full bodies out of carbon fiber, and the Hellucination features more carbon fiber than any of its previous builds. This is perhaps best highlighted by the car's carbon-fiber floor pan, a single huge piece that replaced eight welded metal parts on the stock Charger. The design is similar to a race car and helps improve the stiffness and rigidity of the whole structure.

SpeedKore also used a custom frame with perimeter reinforcements and a roll cage for the build. Attached to this is double A-arm front suspension from Detroit Speed and a custom four-bar with diagonal link used at the rear. Completing the setup are adjustable coil-overs from Penske and sway bars from Detroit Speed. Stopping power comes from a Brembo brake package with six-piston calipers up front and dual four-piston calipers at the rear.

SpeedKore also built a custom interior for the car. It features seats from Gabe’s Custom Interior, gauges from Classic Instruments, and a Kicker 2,000-watt audio system with six speakers and dual sub-woofers.

“The '68 Charger is my favorite vintage American car of all time,” Gilles said on Wednesday in an Instagram post. “Having this incredible opportunity using the latest in fabrication technology, to blend the new and old school together like a fine cocktail, has been a truly enjoyable journey.”