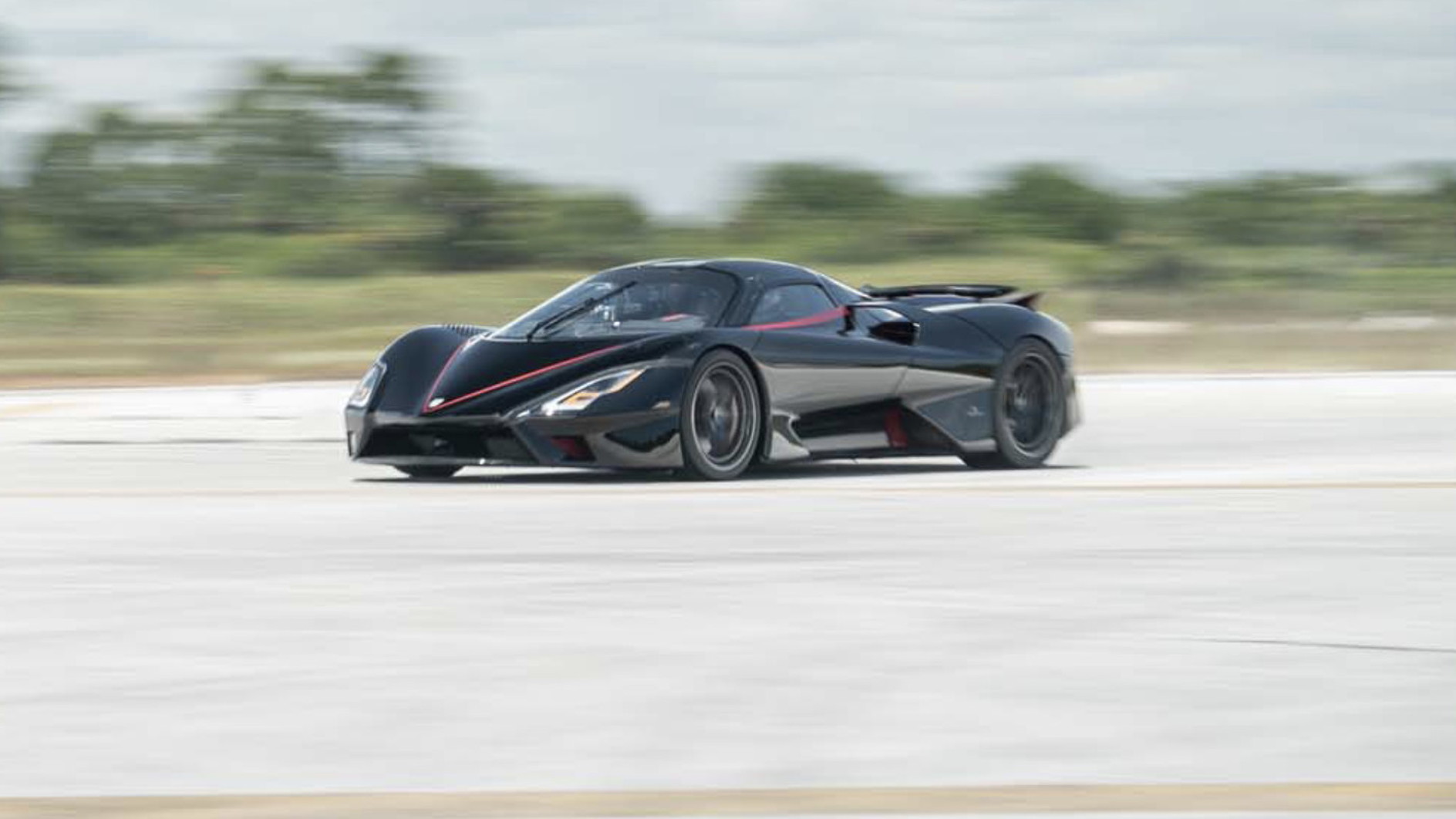 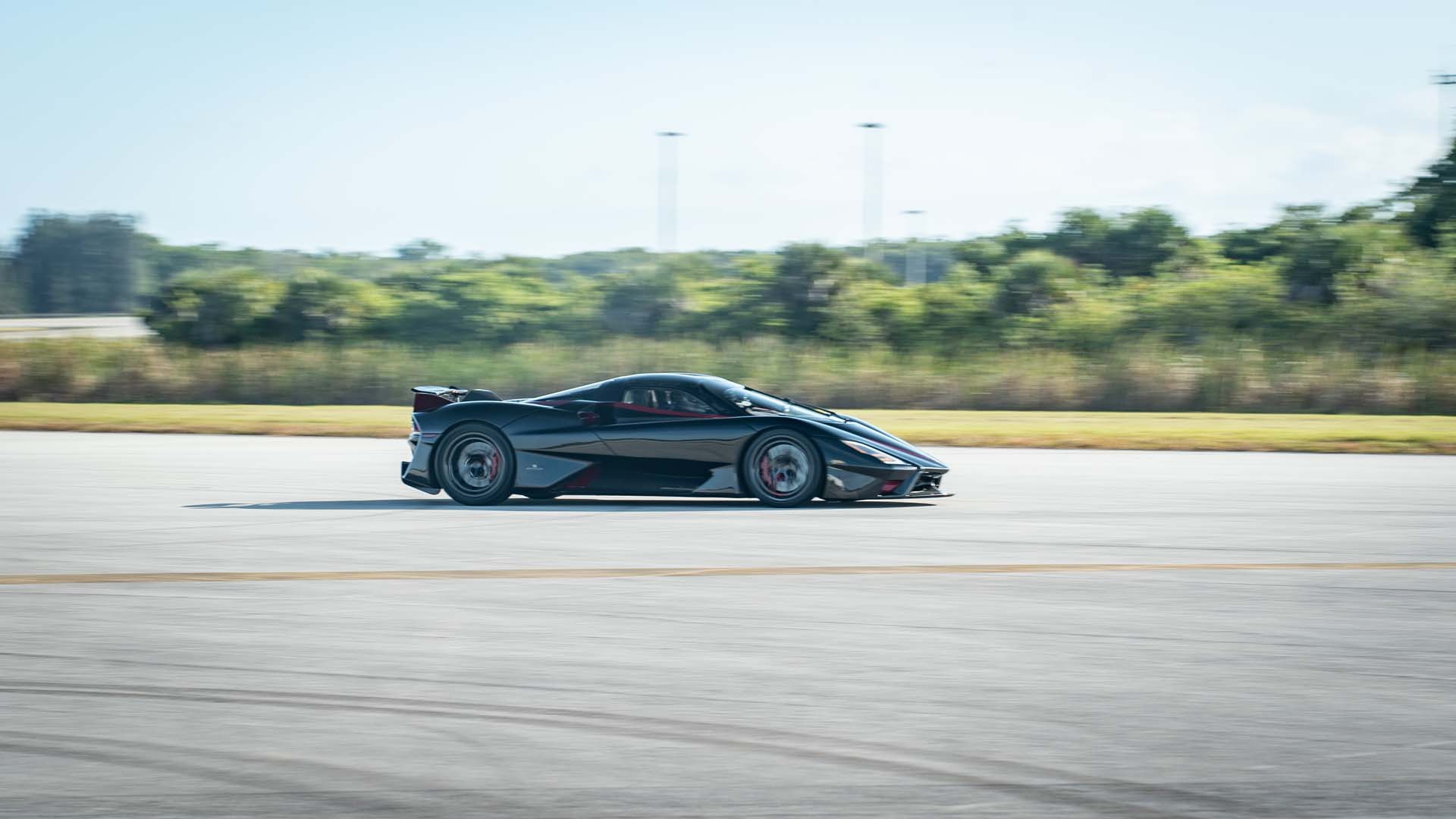 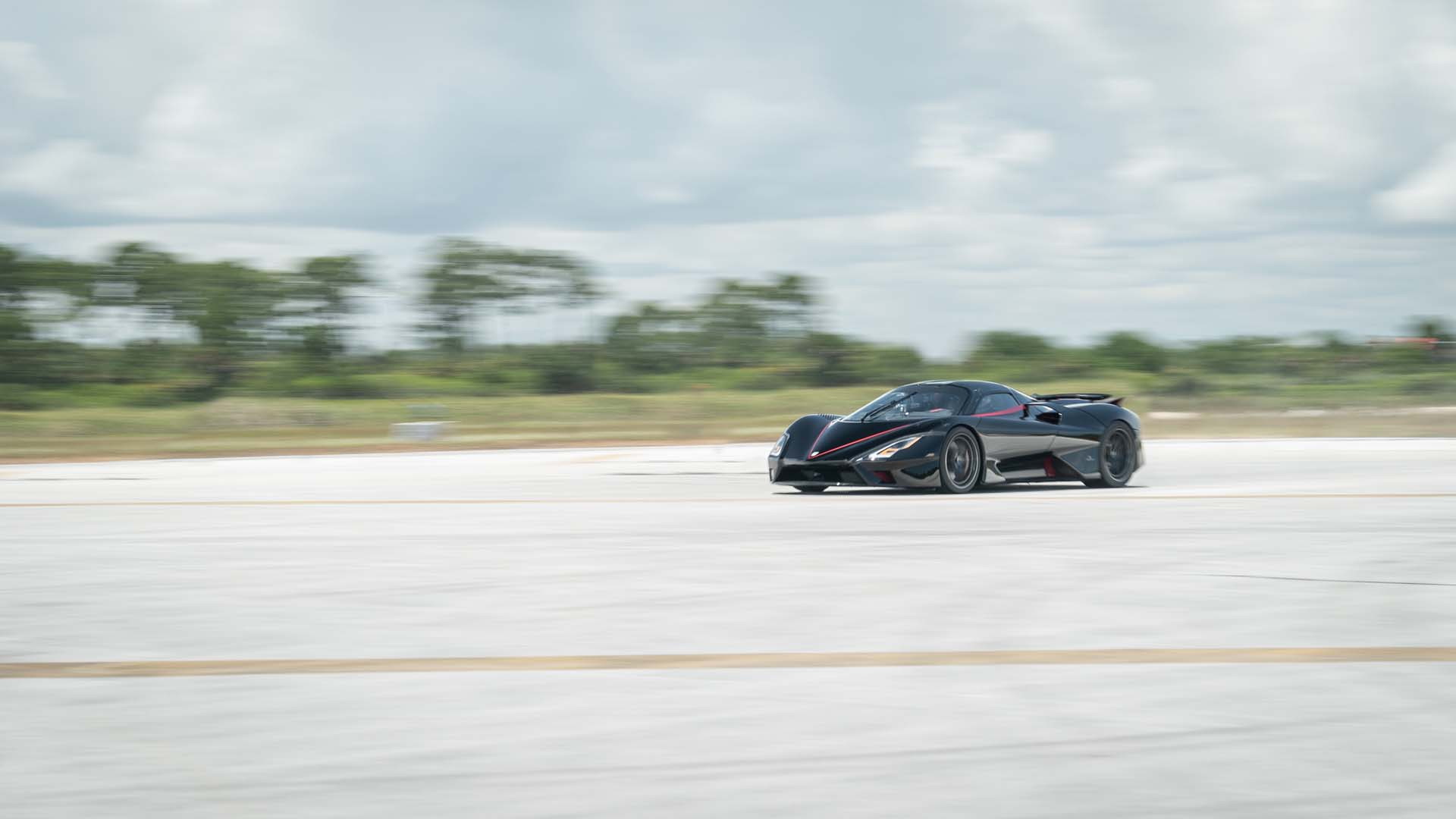 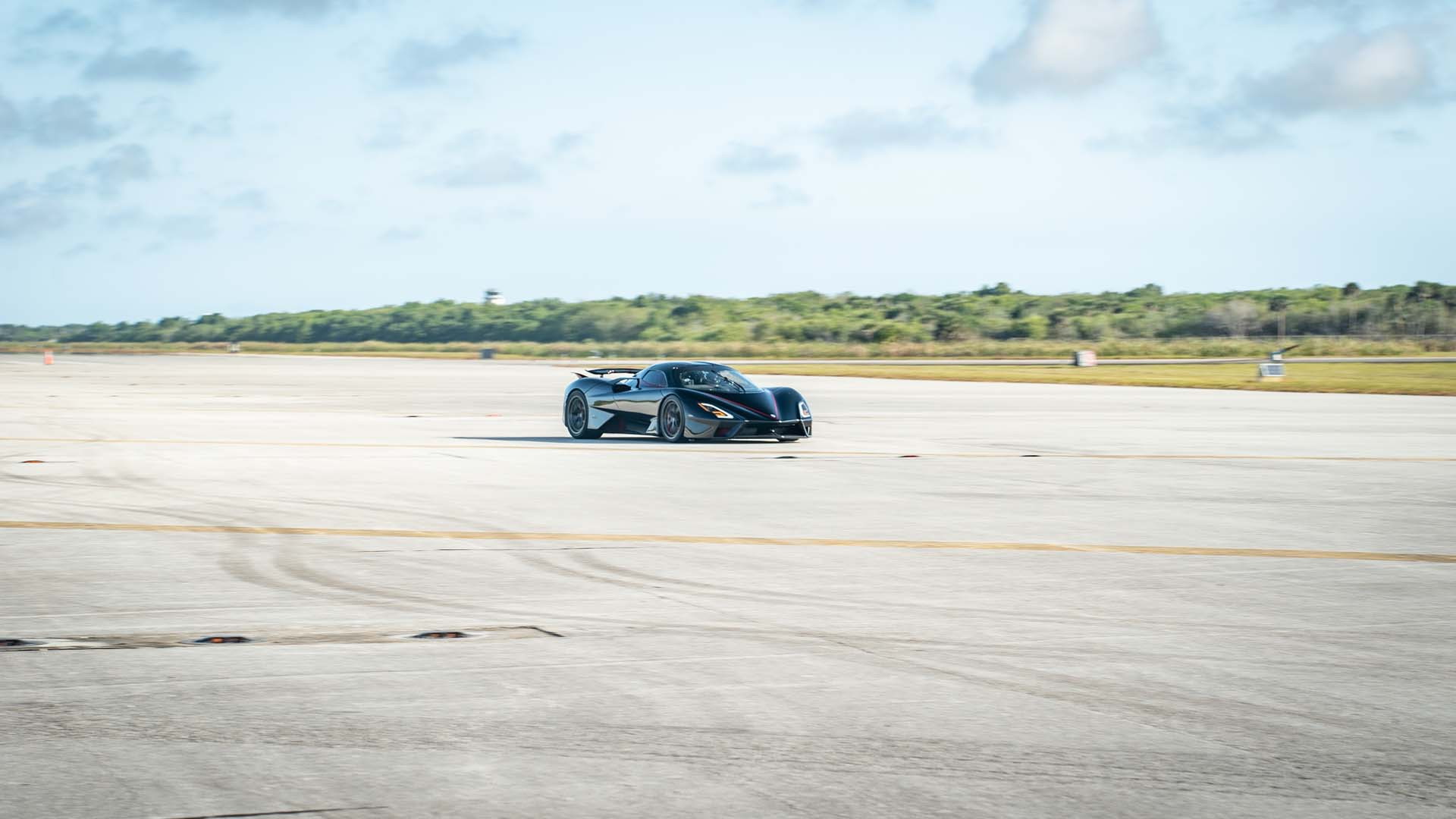 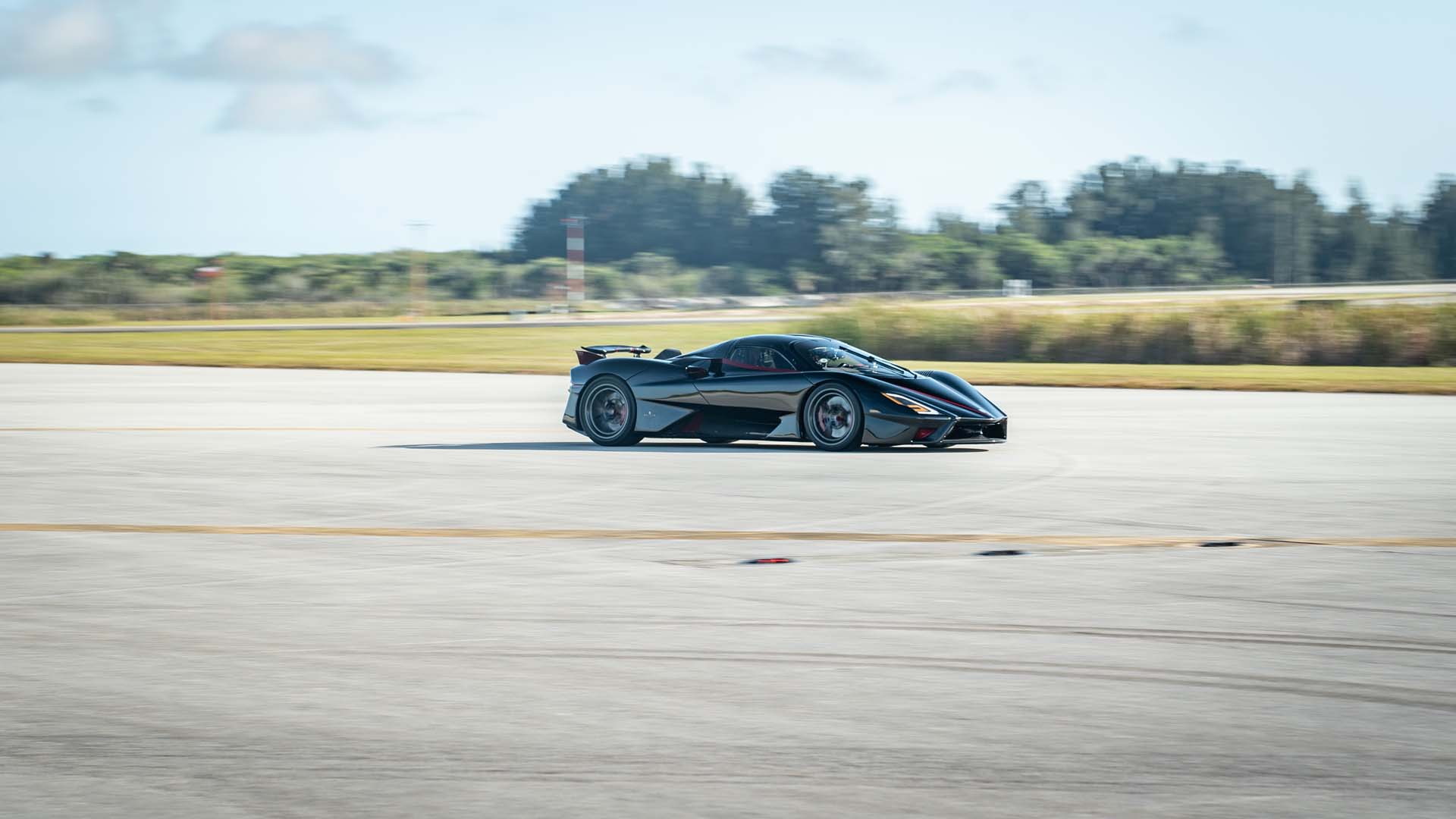 The SSC Tuatara and Dr. Larry Caplin were quite possibly on pace to reset the production-vehicle land-speed record they themselves set, according to SSC founder and CEO Jerod Shelby. It didn’t happen.

An error, which induced hesitation, cost them their chance at breaking the 300-mph barrier during their most recent run. But the car still went faster than ever before.

On Saturday, May 14, over the course of 2.3 miles at Florida's Johnny Bohmer Proving Grounds, the SSC Tuatara hit 295 mph. That bested the 282.9-mph two-way average speed the Tuatara reached when it set the record in January, 2021.

The scene: Mistakes were made

The Johnny Bohmer Proving Grounds is a three-mile runway forming part of Space Florida’s LLF located at the Kennedy Space Center. The first 1,000 feet of runway the team used is asphalt that transitions to 15,000-feet of saw-cut concrete, which then transitions back to 1,000 feet of asphalt.

The braking zone is the last 3,800 usable feet, which means it starts on concrete and transitions to asphalt. The transitions from the first, and last, 1,000 feet of asphalt on the runway are about ¾ of an inch to an inch, which jars the car at speed.

To get more space, and a rolling start, the team used an OSR—which stands for Oh Shit Road–that lead off the ends of the runway for planes to use in case they can’t stop on time. These bumpy asphalt roads aren’t maintained. SSC released a video of the run, and you can see the Tuatara moving up and down on the OSR. At the transition from the OSR to the first 1,000 feet of asphalt runway there’s about a 1.5-inch step up and the car must straddle an in-ground runway light.

Shelby’s team set up braking cones for both directions, rather than moving the cones for each run as they would normally do. This change proved to be a mistake.

The car: Tweaked and improved

The black Tuatara that hit 295 mph was the same car that set the 282.9-mph production-vehicle land-speed record on the same runway a year ago. But changes and refinements have been made to the powertrain, which resulted in a cleaner, more powerful, and more reliable setup.

SSC refined the electrical system and moved the lithium-ion batteries to ensure the system could maintain high voltage; there would be no voltage drops during high-speed pulls from the alternator.

The team also upgraded several suspension sub assemblies to handle the stress of going full throttle for 40 to 45 seconds. All Tuataras will feature the upgraded sub assemblies.

SSC collaborated with Los Angeles based performance innovator Zander Guerra who engineered a new exhaust system for the Tuatara. Shelby noted the system wasn't designed to increase power (though it adds nominally to the car's performance) but to change the sound of the car’s 5.9-liter twin-turbo V-8 built by Nelson Racing. The tone change is due to the Z pattern of the exhaust system, which mixes the exhaust from both sides of the engine. The system adds about 4 lb of weight.

While they also implemented better venting for the crankcase, Shelby told Motor Authority the single largest change to the Tuatara was the implementation of ten lab-quality oxygen sensors. The Tuatara now features one O2 sensor per cylinder plus two primary sensors rather than just two primary sensors. The team had to recalibrate the engine due to the new O2 sensor readings, which changed the motor’s timing and air-fuel ratio. The result was slightly more power. The Tuatara made 1,350 hp on 91-octane pump gas and as much as 1,750 hp on E85. It now makes a little over 1,861 hp and 1,522 lb-ft of torque on methanol and E85, but the team hasn’t dynoed the updated powertrain on pump gas. The Tuatara ran methanol on May 14.

Max boost remains unchained at 27 lb. But the car is programmed to not approach full boost in gears 1 through 4. More boost comes on in 5th gear, with gears 6 and 7 starting to push boost into the 20 lb range. Full power and boost are programmed to arrive at the end of 6th gear and into 7th gear. When the Tuatara hit 295 mph in 7th gear, full boost was just starting to come into view.

A 7-speed automated manual transmission built in Italy by CIMA sends power to the rear wheels. The car originally ran a 2.92 final gear ratio, but that changed to a shorter 3.167 ratio after the first record attempt in October 2020 to get more speed in a shorter distance.

Jim Lau, technical director for Racelogic North America, could not be on-site for the May speed run due to a scheduling conflict. His Colleague, Mitchell Townsend, was present and represented Racelogic while Lau has inspected, validated, and presented a letter confirming the data to MA.

Nürburgring taxi driver Robert Mitchell, who was present for the December 2020 and January 2021 speed runs, was also on hand to witness the May run.

The data file has been independently checked and verified for MA by Eddie Nakato, founder and CEO, of AR Motorsports.

“All the data looks correct. They did what they said they did. I have no doubts,” Nakato told MA.

Dr. Larry Caplin, owner of the car used for the speed run, took off down the OSR headed north and hit the runway and the 1.5-inch transition at 47 mph. At the 1,000-foot mark, where the asphalt runway turns to concrete, the Tuatara was traveling at 130 mph.

“The transitions are pretty wild,” Nakato said after watching the footage from the run.

As Caplin crossed into the braking zone he went for a split second longer than he should have and hit 295 mph before lifting off the throttle. The rate of acceleration at 295 mph was still climbing quickly, according to Shelby. Based on the data, the team believes it only needed about two more seconds to hit 300 mph, but the car ran out of runway.

“Hitting that (pavement) transition (during the braking zone) at about 200 mph has to be hair-raising at that speed,” Nakato told MA.

The team had an hour, maximum, before it could make a second run in the opposite direction to get the two-way average needed for a new record.

Caplin took off for the second run headed north down the OSR. Shelby said Caplin decided to start farther down the OSR to try and buy some distance to increase the Tuatara’s speed before hitting the braking zone. That made the executive nervous. The goal was to hit the runway at about 60 mph and buy an extra 10 mph of top-end speed.

This time, the Tuatara hit the 1.5-inch transition to the airstrip from the OSR at 81 mph, 34 mph faster than the first run.

At the 1,000-foot transition from asphalt to concrete on the runway, the Tuatara was going 146 mph in third gear, 16 mph faster than the first run.

“No road car I’ve seen pulls like that.” Townsend said.

Then it went wrong. Caplin lifted.

The first run’s braking cones were still in place. Caplin saw the cones and momentarily lifted off the throttle as he hesitated in the name of safety for the braking zone. It wasn’t.

At the moment when Caplin lifted off the throttle the Tuatara was going 258 mph and two miles were left before the braking zone. The data indicated the car was on pace to break 300 mph, according to Shelby. But Caplin lost momentum when he lifted, effectively killing the run.

Shelby shared the in-car video footage and Racelogic VBox data of the second run with MA, but will not release it publicly. Caplin’s frustration with the placement of the braking zone cones is evident in the video.

After looking through the data and footage Nakato said, “This car is stupid fast.”

The team didn’t get the chance to run north again because the winds picked up to 13 mph by the time the car was ready.

Shelby said the rule of thumb is it is safe to run with wind speeds of 9 mph or less.

Caplin pulled the plug and made the call. The attempt was over.

The team is done

Based on the data presented from these two runs Nakato told MA, “Yes, this is a 300-mph car.”

Shelby said SSC is done chasing speed records for now. The executive says he is satisfied with how the car has performed. It holds the speed record, and he now feels confident he can look a customer in the eye and say the car’s capable of 300-plus mph based on the data. That was the goal, and for him it’s been achieved. However, he said he loses sleep over what could have been on that second run.

If two or three of SSC’s competitors were willing to meet up on a runway for a multi-car public speed run, Shelby would be in. “I think it would be very clear and evident that this car is the fastest car in the world,” Shelby proclaimed.