The 1931 Bugatti Type 51 Dubos Coupe is a unique combination of coach-built bodywork and race car mechanicals. Now part of California's Nethercutt Collection, it was recently featured on "Jay Leno's Garage," where Cameron Richards, vice president of the collection, explained its design and history.

This car started out as a grand prix racer, and was driven in competition by Louis Chiron (namesake of the Bugatti Chiron) and Rene Dreyfus. It was sold in 1936 to Andre Bith, who commissioned Parisian coachbuilder Louis Dubos to convert it into a road car. Dubos gave the car its distinctive bodywork (which Leno notes is similar to the Bugatti Type 57SC Atlantic), and it's been known as the Dubos Coupe ever since.

The Type 51 retained its racing engine, a 2.3-liter dual-overhead-cam supercharged inline-8 that makes about 185 hp on gasoline, or 200 hp on alcohol. Coupled to a 4-speed manual transmission, the engine can propel this car to 140 mph. 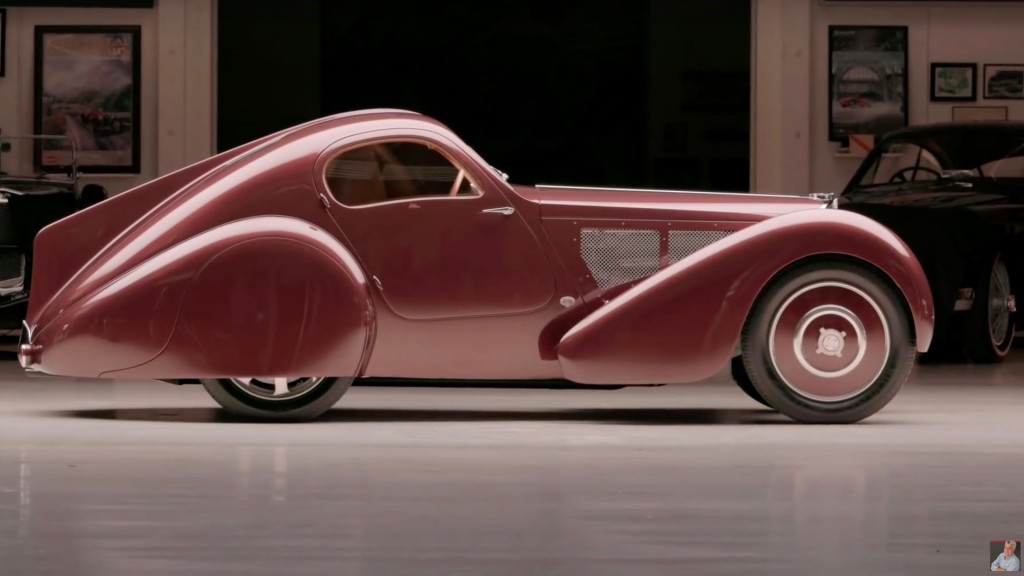 At the back are four small tailpipes. This was done to avoid clearance issues with one, larger-diameter tailpipe, Leno said. The front wheels have smooth covers, but Bugatti's traditional spoked racing wheels can be seen poking out below the rear-fender skirts. Another quirk is the fuel filler, which is located in the cabin and surrounded by leather upholstery and likely makes refueling a bit nerve wracking.

The coupe changed hands a few times over the years, and at one point the chassis and Dubos body were separated. The Nethercutt Collection acquired the chassis, and then located the body, which was in a collection in Colorado. After almost 50 years, the two components were reunited as part of a full restoration.

Like all cars in the Nethercutt Collection, the Dubos Coupe is fully drivable, as Leno demonstrates by taking it for a drive near his Los Angeles-area garage.