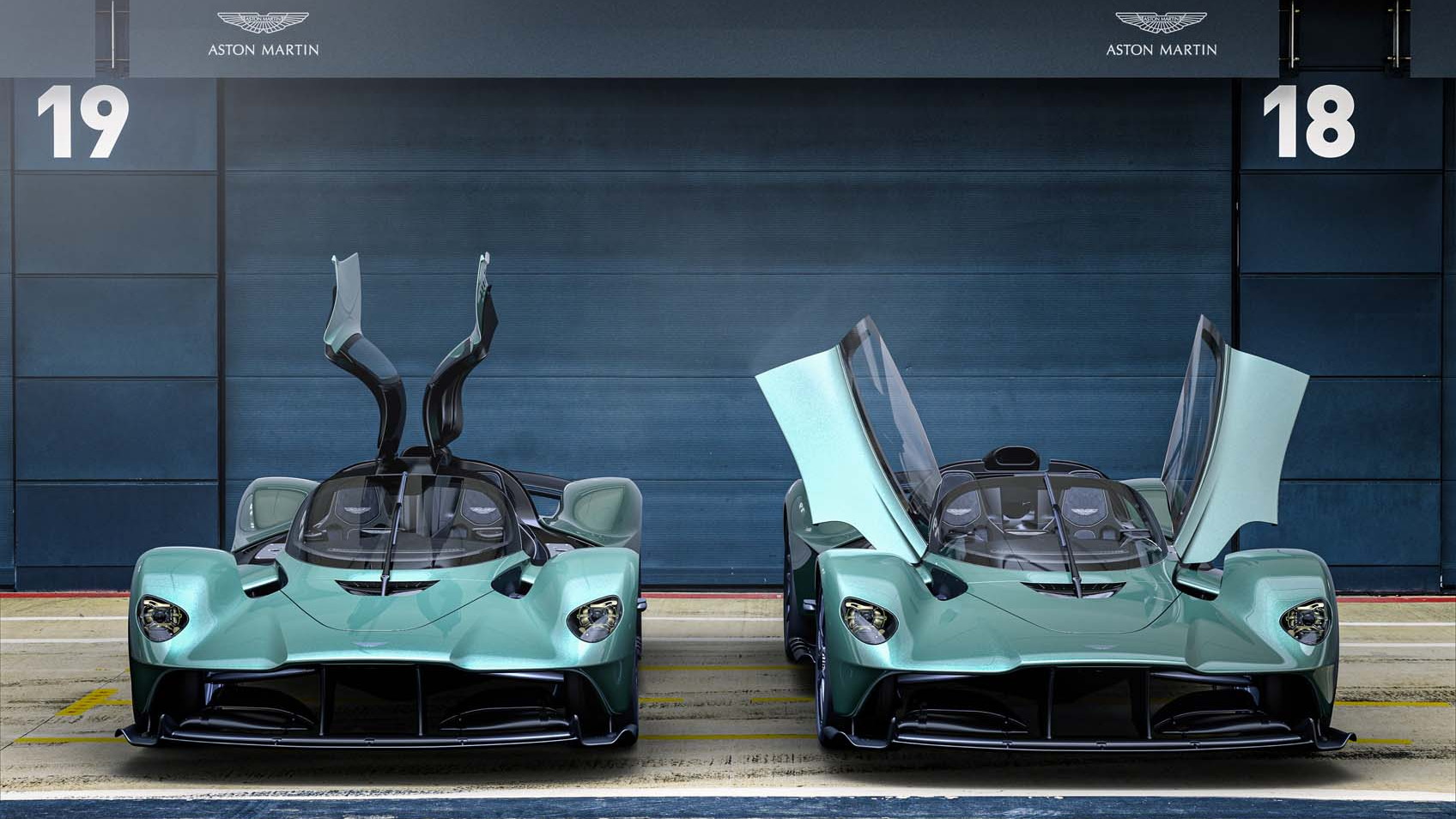 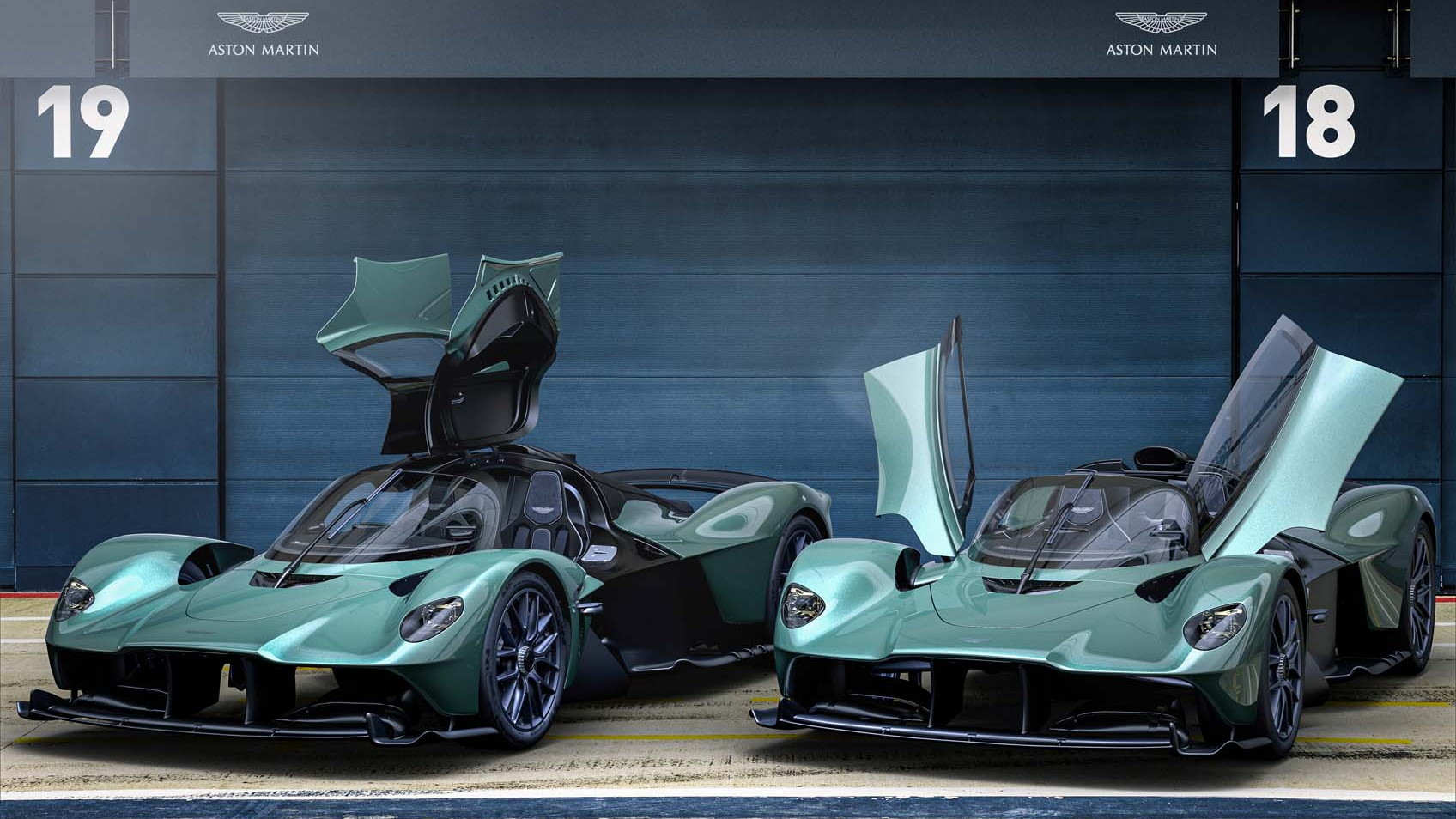 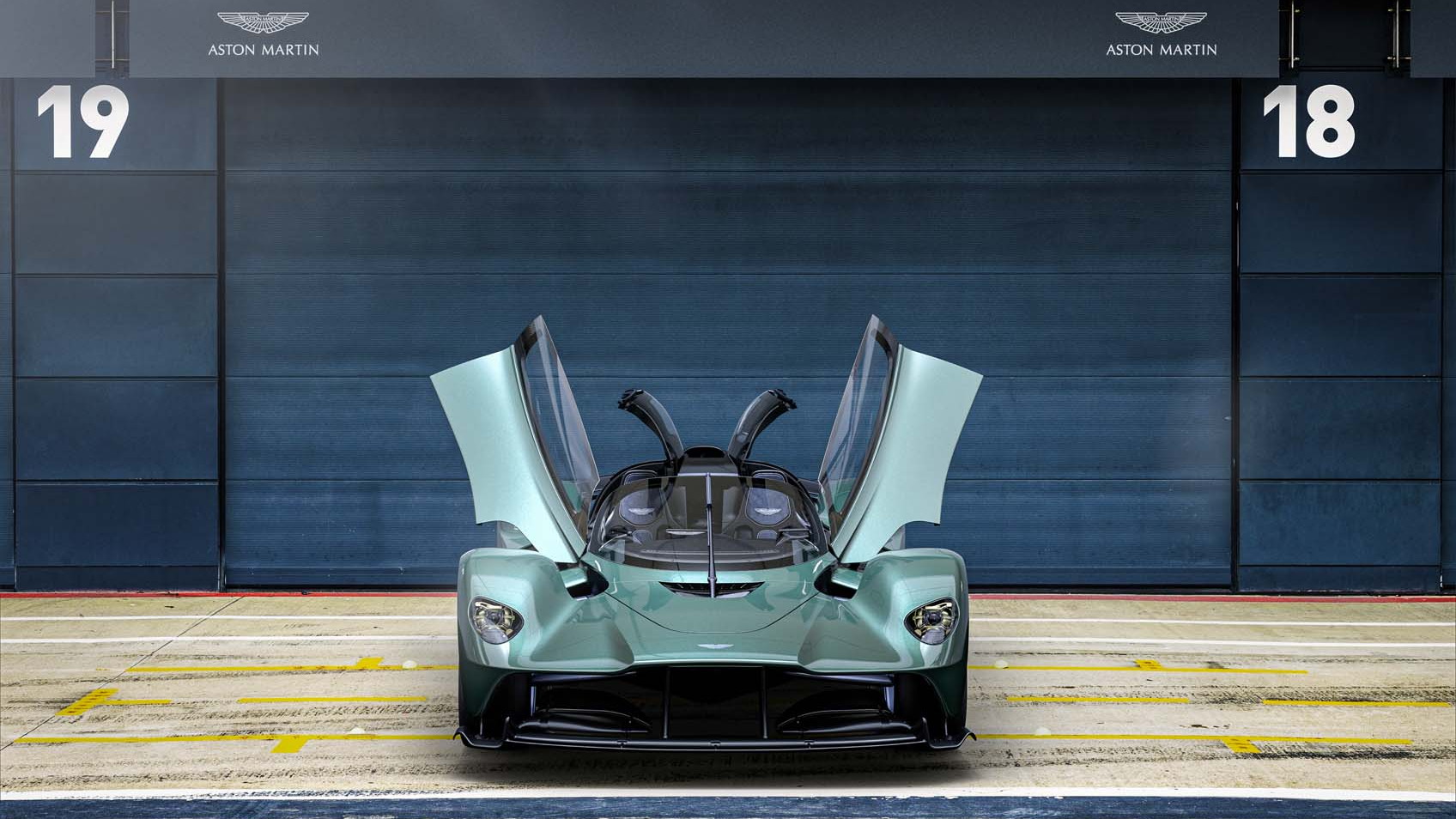 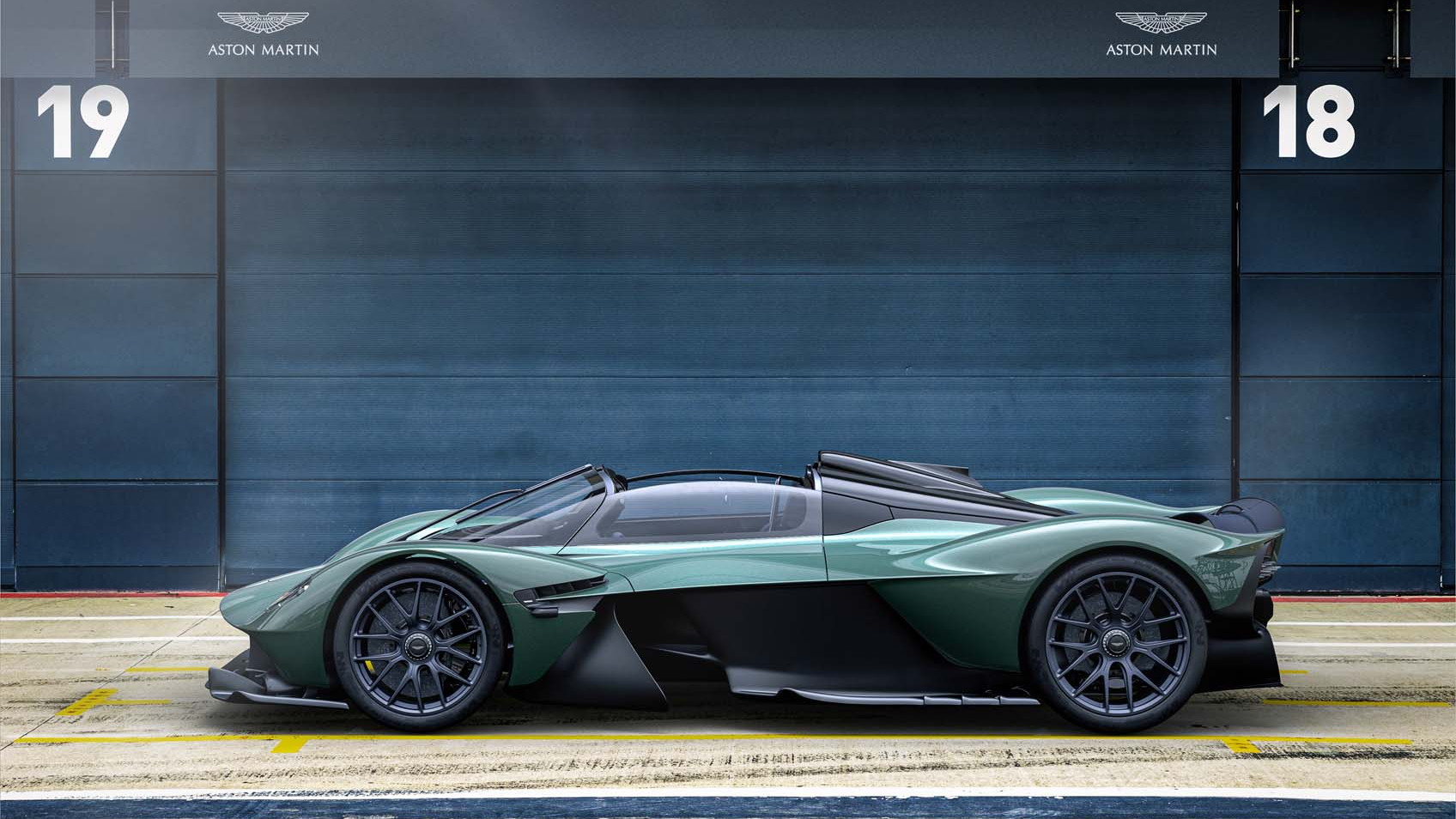 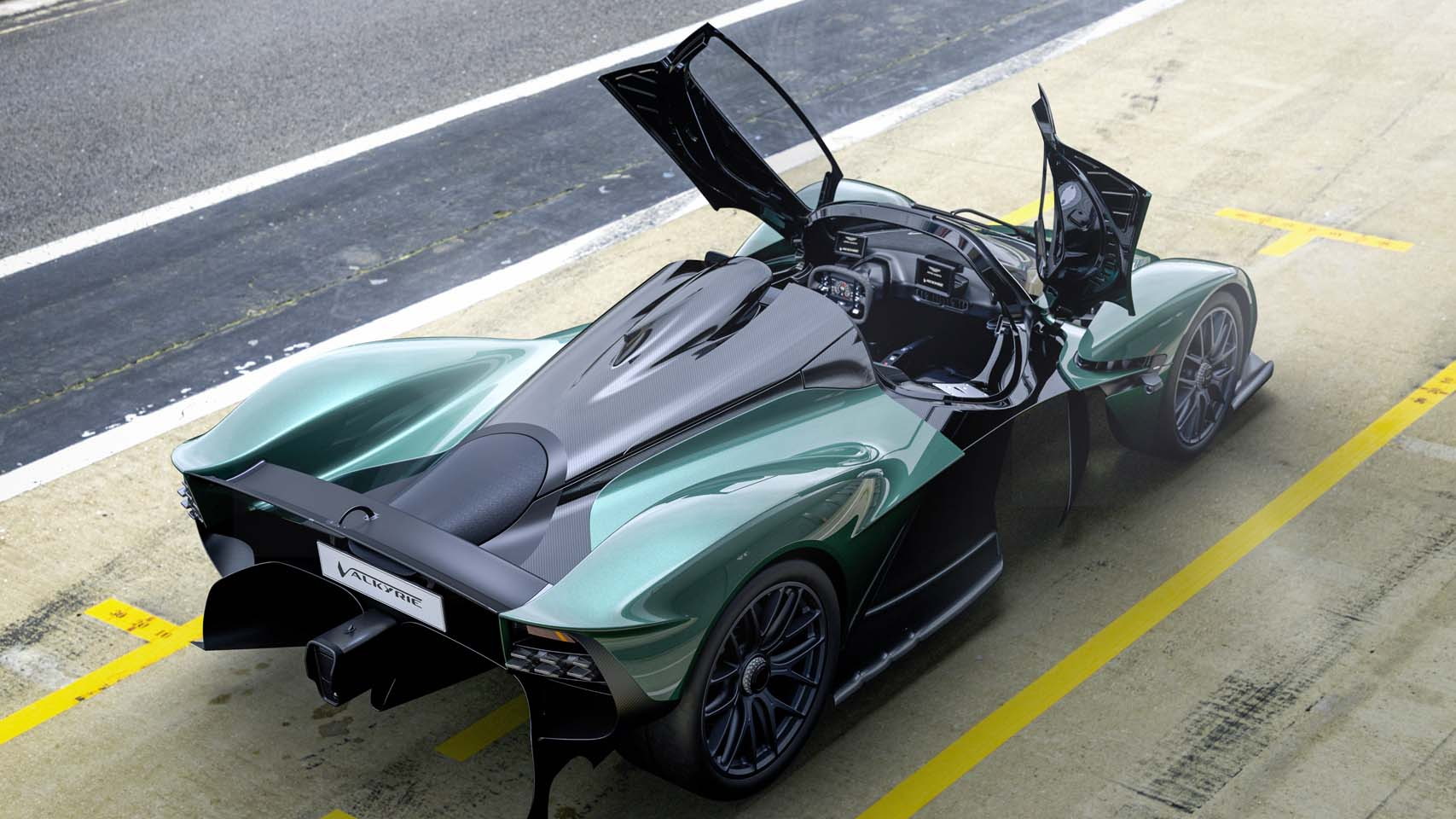 Called the Valkyrie Spider, the new version features a removable roof panel whose installation neccessited the change from the gullwing doors of the regular Valkyrie to the butterfly doors you see here. The roof panel is made from carbon fiber and features its own polycarbonate windows that can be flipped opened.

Aston Martin plans to build 85 examples of the Valkyrie Spider, in addition to the 150 regular Valkyries and 40 track-only Valkyrie AMR Pros. Deliveries are due to start in the second half of 2022 (the coupe starts delivery this year), and both left- and right-hand-drive versions are planned.

The Valkyrie is already pretty much the closest representation of a Formula One race car for the road that you can get, and the Valkyrie Spider takes things to the next level by giving you the open-air experience on top. Just imagine the sound of the car's 6.5-liter V-12 screaming to over 11,000 rpm. Peak power, with a hybrid element from Rimac and Integral Powertrain, is 1,139 hp.

Despite losing the roof, Aston Martin's simulations show the Valkyrie Spider will still be able to deliver performance coming close to F1 and LMP1 racers, just like the coupe whose weight difference is said to be marginal. Claimed performance includes a top speed of more than 205 mph with the roof removed and more than 217 mph when placed back on top.

Changes are said to include revisions to the main carbon-fiber structure, plus recalibration of both the active aerodynamic and active chassis systems. Red Bull Racing Chief Technical Officer Adrian Newey, who has been involved with the Valkyrie project from the start, said maintaining performance with the roof removed, especially aerodynamic performance, was of paramount importantance.

“Right from the very beginning of the Aston Martin Valkyrie project we were driven by exacting targets that went way beyond any previous road car, and the Valkyrie Spider brings that same ethos to the open cockpit hypercar category,” he said in a statement.

Downforce in the Valkyrie Spider is an incredible 3,086 pounds at 149 mph, helped mostly by the full-length Venturi tunnels that run either side of the cabin floor. The downside is that cabin space is a bit tight. Occupants are also forced to sit with their feet almost at hip level, just like in an F1 car. Camera monitoring systems and parking sensors will help the driver manuever the car in tight situations.

Aston Martin organized a major presence for Monterey Car Week, as this year marks the 70th anniversary of the arrival of the first Aston Martin sports car in North America. Also present is the rebooted Valhalla hypercar, which was first shown during the 2021 Formula One British Grand Prix in July. The new V-8 hybrid hypercar will be limited to 999 units, with the first examples due for delivery in the second half of 2023. Monterey Car Week has also played host to the local debut of Aston Martin's V12 Speedster and “Goldfinger” DB5 continuation car.

The first Aston Martin sports car to be sold in the U.S. was a DB2 coupe. Among the first owners was American racing legend Phil Hill who helped promote the DB2 here and took delivery of his own on September 15, 1951. Americans made up the bulk of buyers for the DB2 and even today the market accounts for 30% of all Aston Martin sales.

Monterey Car Week runs until August 15. For our full coverage, head to our dedicated hub.