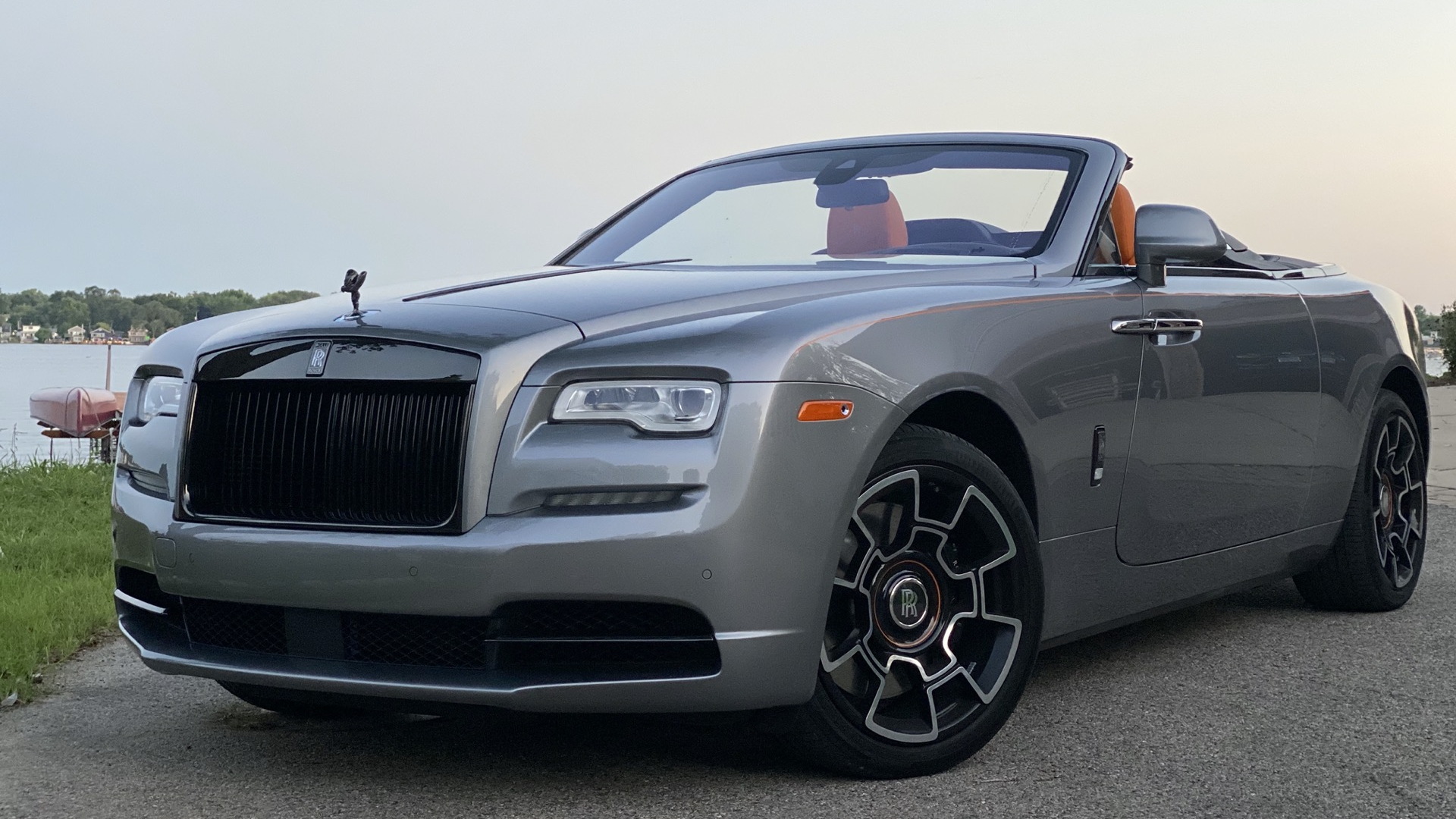 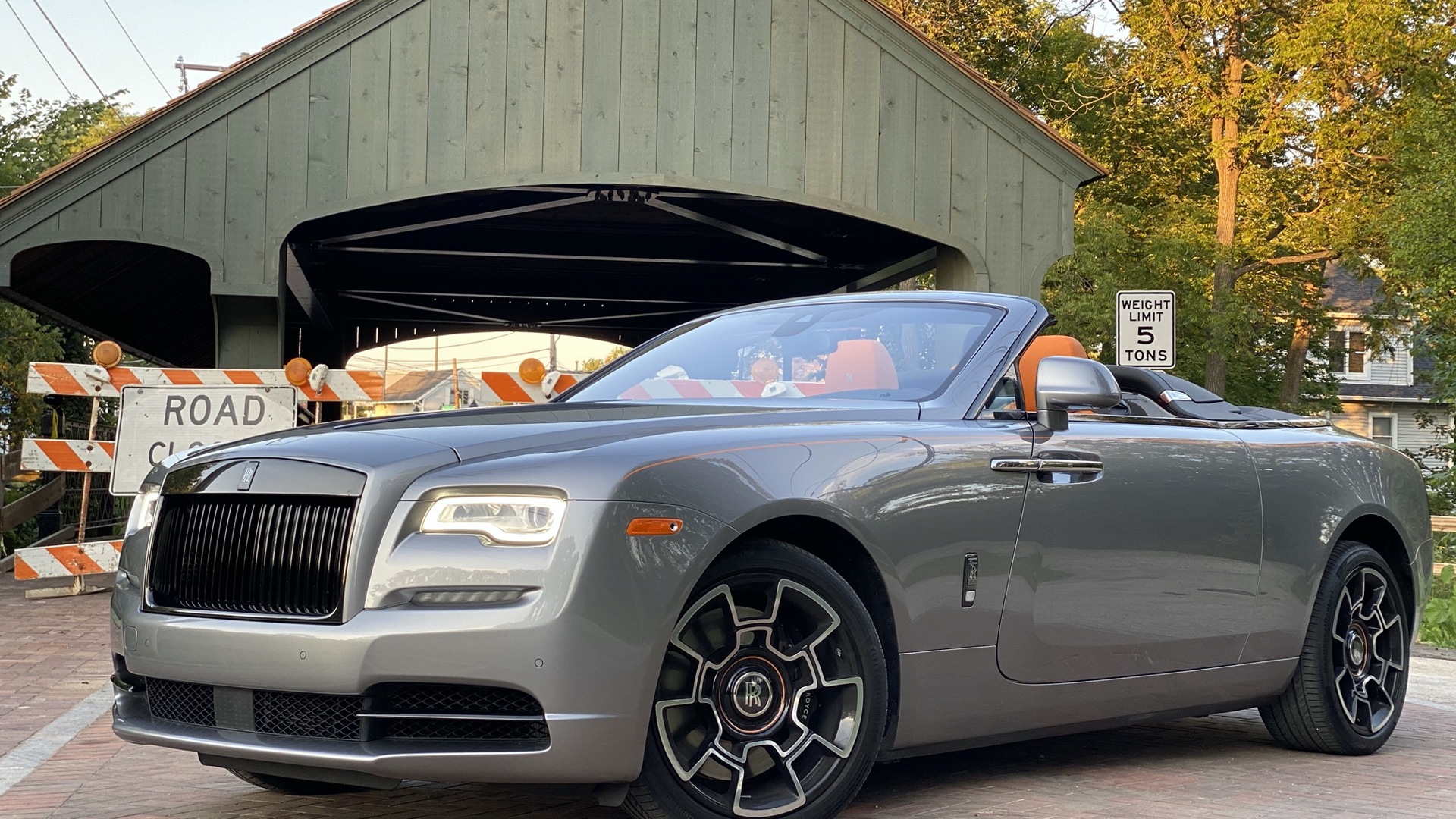 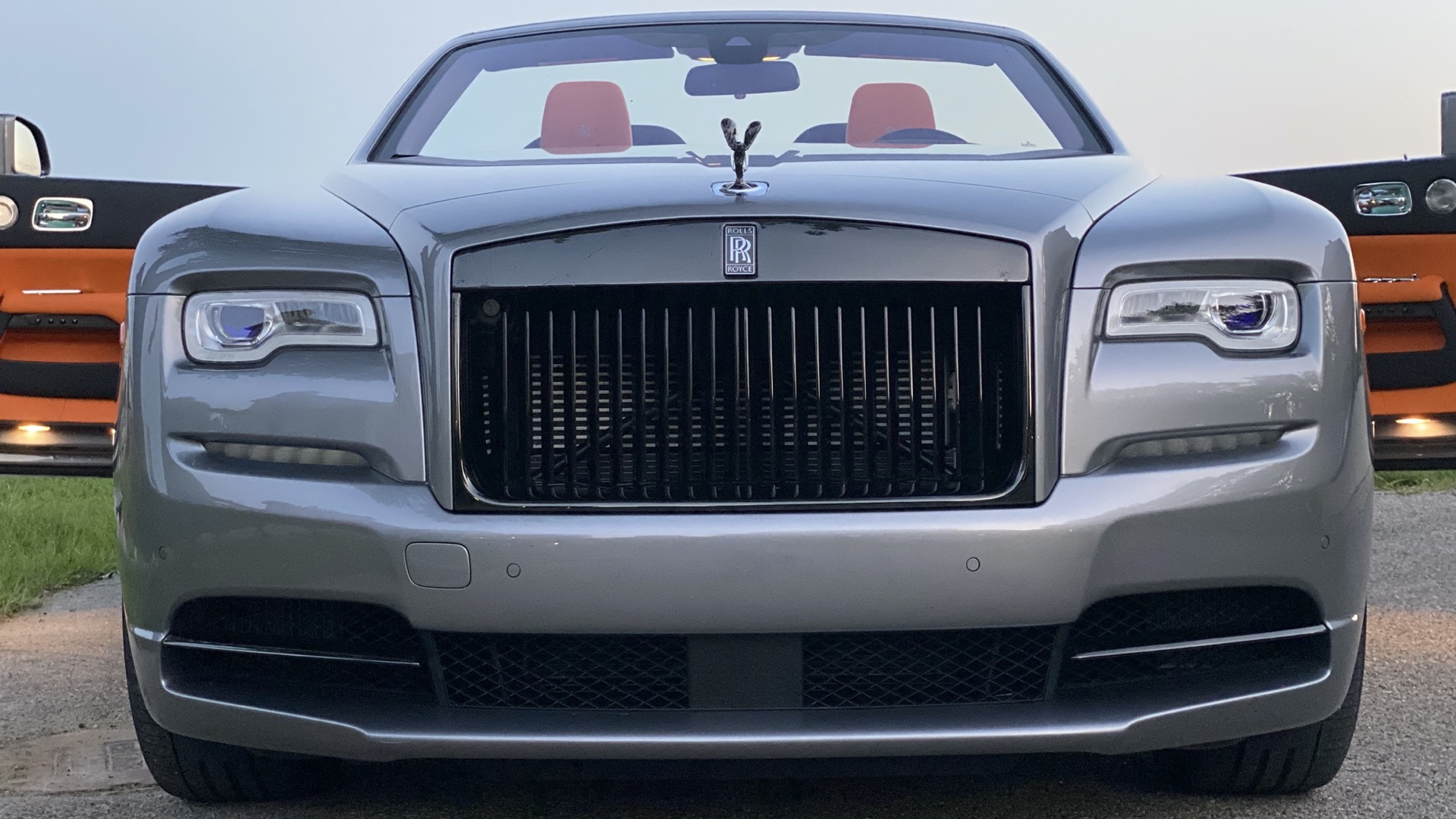 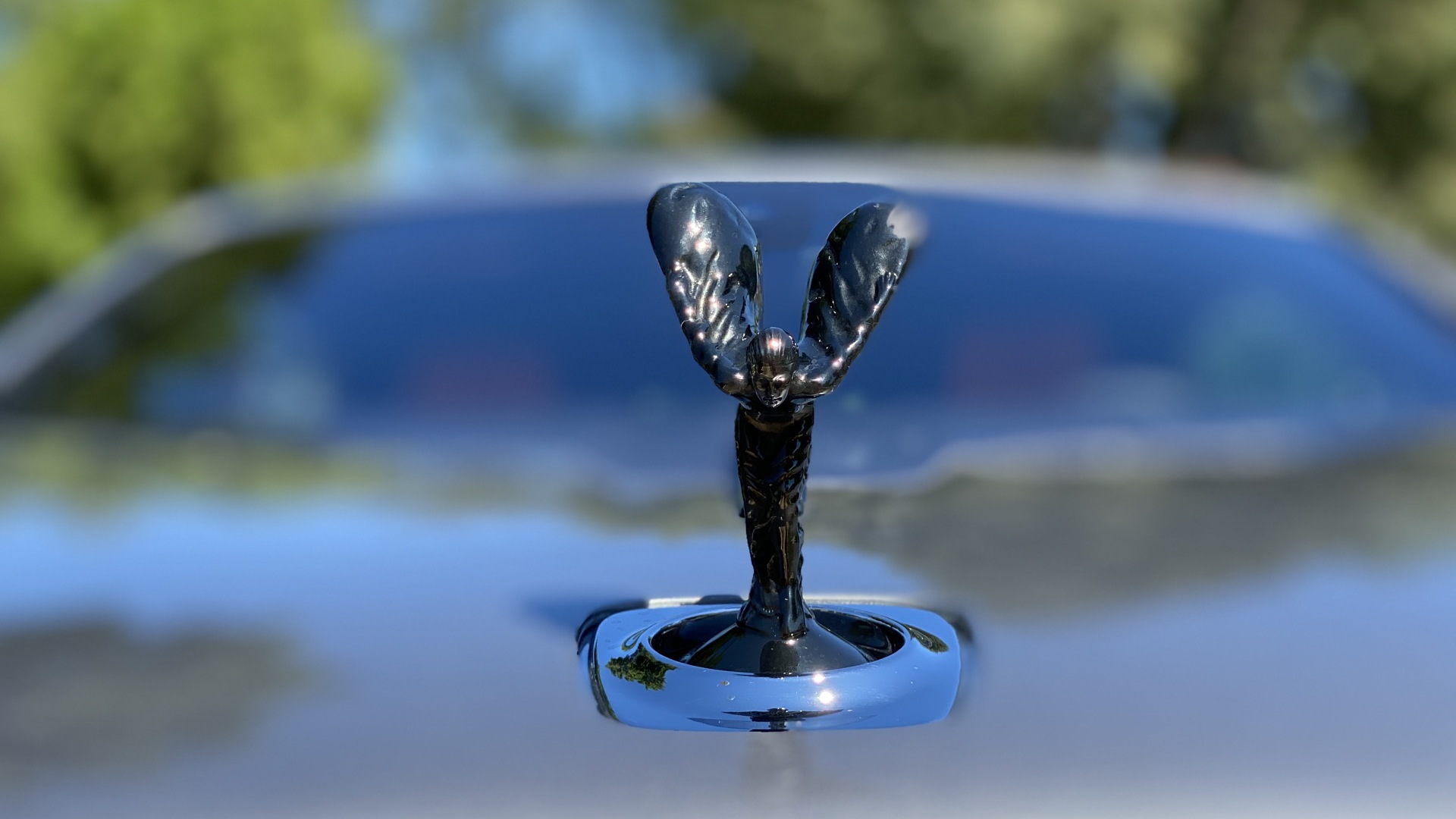 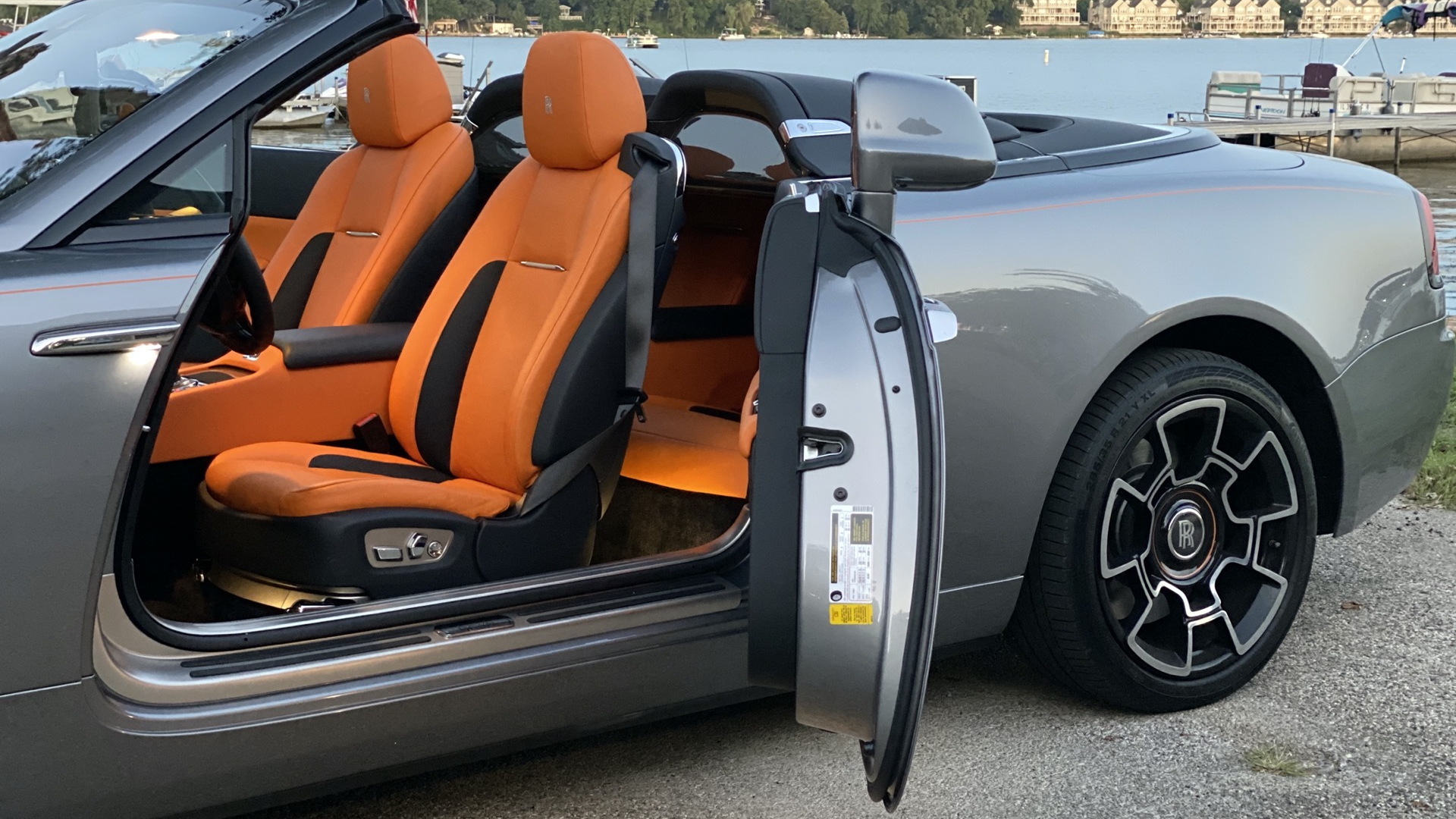 Five years before Rolls-Royce founder Henry Royce made his first car in 1904, an American economist named Thorstein Veblen coined the phrase “conspicuous consumption.” The term for flaunting your wealth through lavish luxury goods was resurrected in popular culture during the nouveau riche explosion in the 1980s, when Rolls-Royce Motor Cars went public and schlepped dijon mustard in ad spots.

“Conspicuous consumption” was also the second-most heard expression during my three privileged days with the 2020 Rolls-Royce Dawn Black Badge.

The most frequent expression was, “How much is that thing?”

That “thing” is a two-door four-seat luxury land liner powered by a twin-turbocharged 6.6-liter V-12. It weighs 5,644 pounds, yet it planes to 60 mph in just 4.9 seconds, according to Rolls-Royce. It commands attention.

Built as sturdy as a ship and as graceful as a ballerina, the Dawn flaunts its excesses by dropping the black top at speeds up to 30 mph to reveal available orange leather that pops like the sun at daybreak.

But what is it about this car that costs more than double the average home price in the U.S.?

The Dawn Black Badge is the second most expensive model in the Rolls-Royce stable behind the legendary Phantom full-size saloon. Though the half-million dollar Phantom has been conspicuously concealing celebrities and heads of state for decades, Rolls shelved the Phantom’s Drophead Coupe convertible version in 2016 for the slimmer, sleeker, shorter Dawn. It was intended for a nouveau riche generation, with more nimble handling for more nimble class ascension.

Based on the Wraith, the Dawn starts around $360,000. Every Rolls gets a destination charge double that of normal cars and the Dawn incurs a $2,600 gas guzzler tax because 14 mpg combined means nothing on the smiles-per-gallon scale.

For an extra $50,000, the Black Badge treatment is the bespokest of the bespoken. It has darkened the spectral ancestry on the Wraith grand tourer, Ghost sedan, and, most recently, the Cullinan SUV.

To say that no two Black Badge models will be alike is a bold statement from a company that already offers owners the option to have their wood trim veneers “crafted from a tree on your estate.”

Black Badgers can customize door handles, switchgear, and illuminated tread plates on the sills. Different paint combinations, custom paint jobs, custom contrasts—anything is possible because you order one made for you, you don’t go pick one out at a dealer. That would be common. A Rolls is commissioned, not merely purchased.

Even though my tester came in Jubilee Silver, a number of hues lit up the Black Badge. The interior came in Mandarin Orange instead of the Black Badge’s typical black, and gray seat piping ($3,175) added visual flair some might call bling. The colors on the “Double R” logo were inverted, the six-layer canvas top was a rich, inky black, and a dark chrome I’ll call Gotham Gray trimmed the grille, exhaust tips, trunk trim, and retractable Spirit of Ecstasy hood ornament. Ensconced in such luxury, it was easy convincing people that if they stood close enough and spoke soft enough, the Spirit of Ecstasy would be moved to retract or rise up from the hood.

There were other fine points, but the $25,750 aero cowling was not one of them.

A tonneau cover made of carbon fiber and aluminum spanned the spacious rear seats and made them useless. It fits into the headrest posts and has a pair of lockable, leather-lined storage units. With an effort, one person can remove it, but I couldn’t fit it in the trunk.

It’s the most conspicuous addition to the Dawn Black Badge, effectively drawing air over and around the front-seat riders. My passenger and I talked at speeds of up to 70 mph without raising our voices. Yet, with the top down it muted the gorgeous interior. It canceled one conspicuous element with another.

With the top up (and the cashmere headliner overhead) the Dawn proved quiet enough to sound nothing like a convertible. The six-piece roof retracts in silence too, at a leisurely 22 seconds at speeds of up to 31 mph.

Another upgrade of the Black Badge line comes under the long hood. The 593 horsepower and 605 pound-feet of torque produced by the retuned V-12 represent increases of 30 hp and 45 lb-ft over the less exclusive Dawn. The extra power  doesn’t translate to a quicker 60 mph time, and the top speed remains limited at 155 mph, but it delivers more power for knifing through the night or carving up the highway while cruising.

You don’t feel it much, you don’t feel much of anything from the road thanks to a hefty independent front suspension and a self-leveling rear air suspension with active anti-roll bars. Even with 21-inch carbon-alloy composite wheels that are 3D forged and take years to make (according to Rolls-Royce), the Dawn soaks up railroad crossings and polo grounds (I imagine) with equal disregard. The hefty steering feel is as removed from the road as buyers are from unemployment forms.

The acceleration, while powerful, is still almost distant enough to be dull. For a more sporting ride, the smaller, lighter, perhaps more conspicuous Bentley Continental GT outperforms the Dawn.

Yet there are conspicuous absences as well, such as active lane control and other driver-assistance systems. The gorgeous nautically themed dash has a retractable cover to seal away a BMW-sourced touchscreen that is on the smaller side. Below the traditionally opulent and analog instrument cluster is a digital display that shows vehicle info in a small portion of the display band; the remaining three quarters of that display are a conspicuous waste of real estate. The turn indicator stalk is thin, almost flimsy, which is uncharacteristic.

But, really, no one else riding in the car or staring as it passes by would notice such inconspicuous things. For even the most discerning tastes, it passes muster.