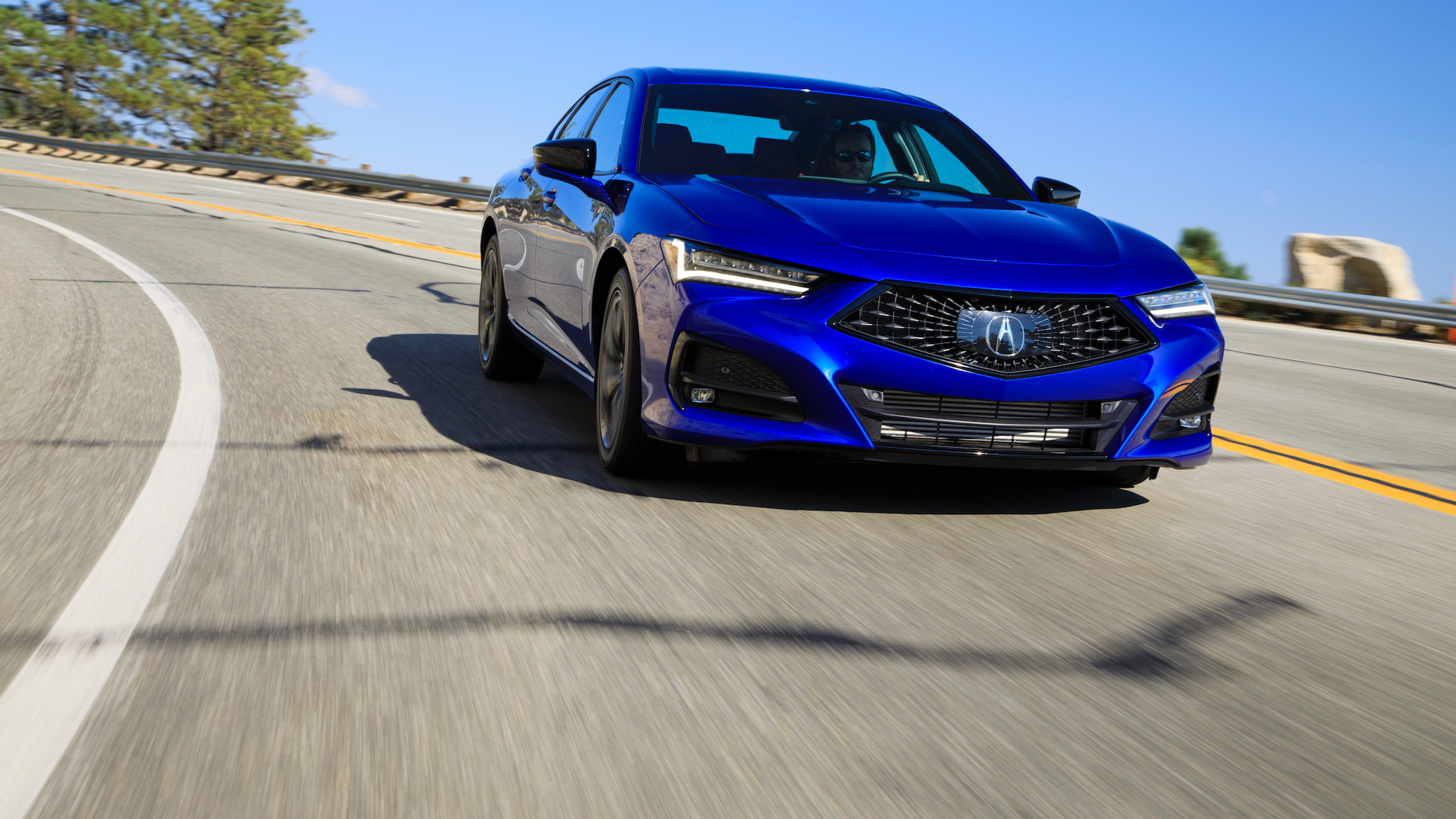 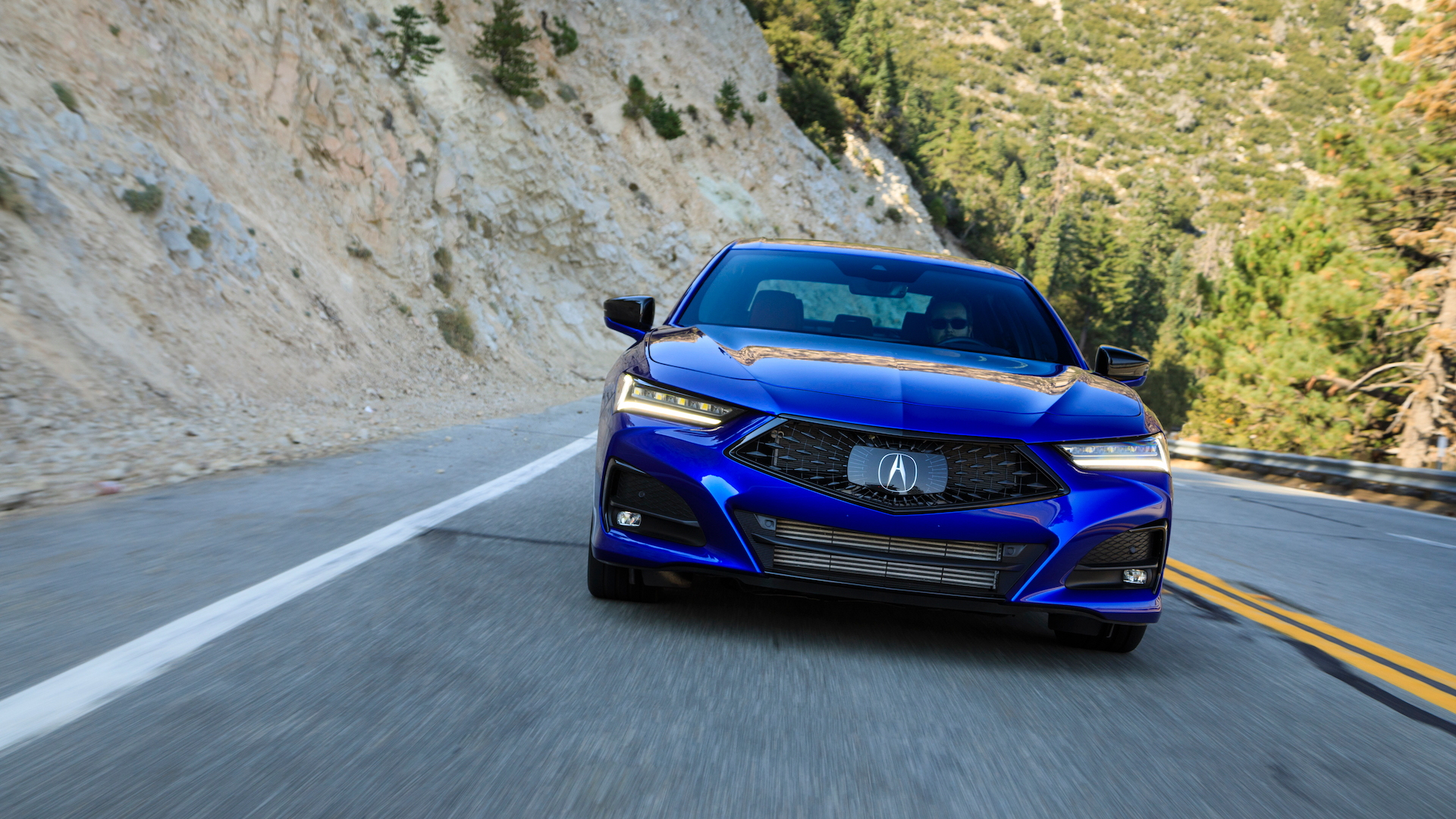 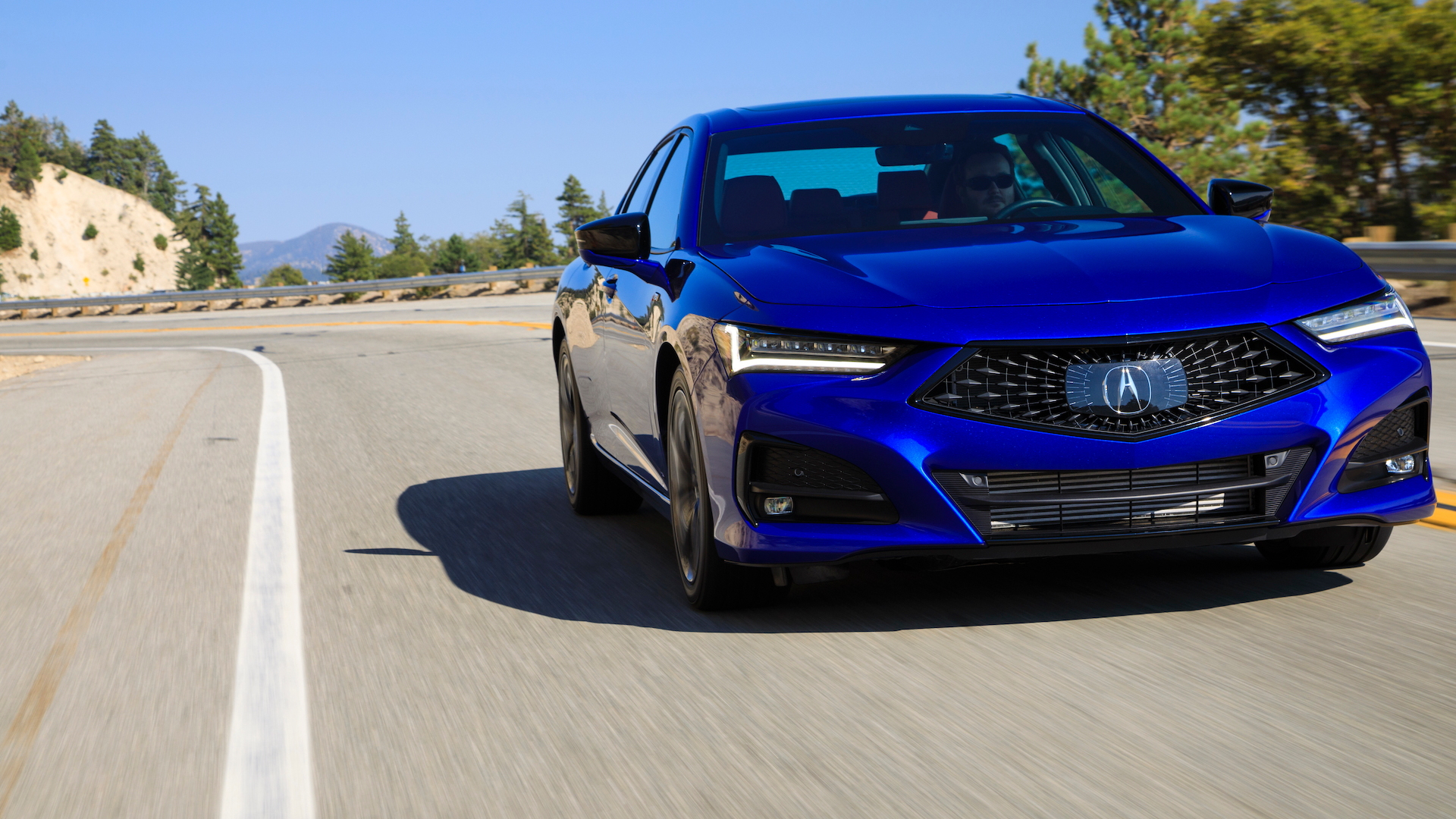 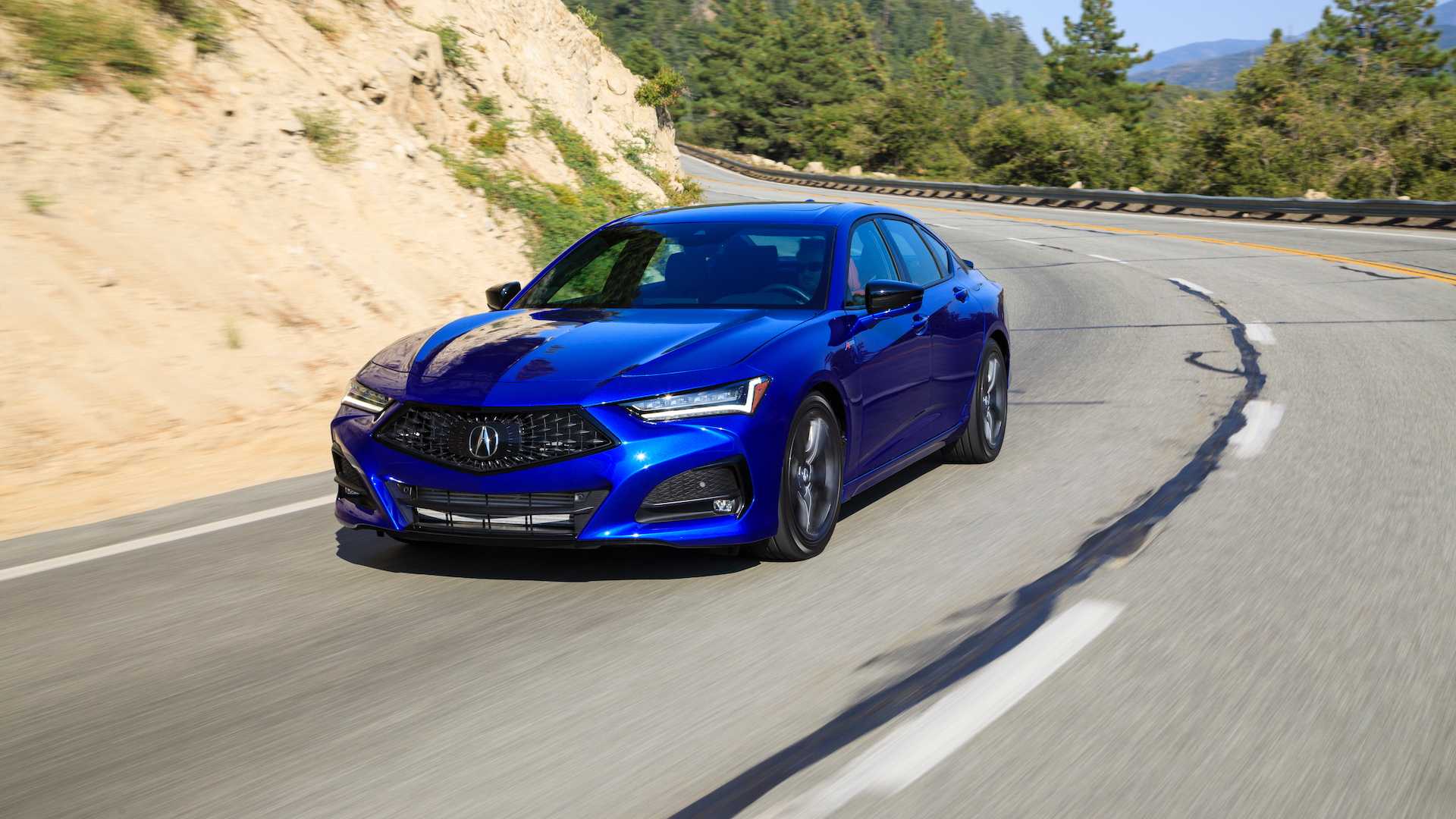 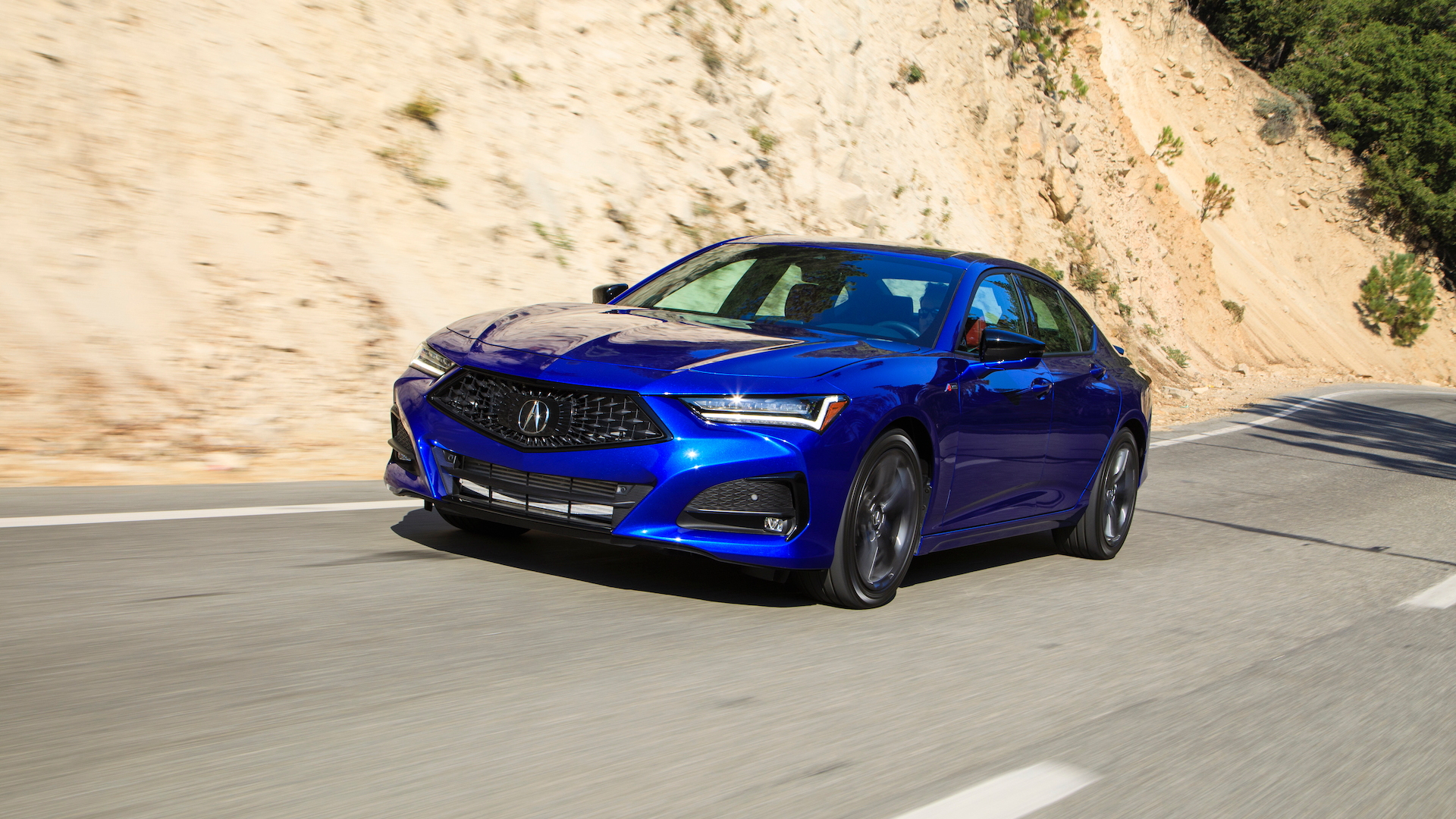 Driving the 2021 Acura TLX on the pencil-straight streets of the Detroit suburb of Novi, Michigan, I long for the world to return to normal. This regional media drive is relegated to suburbia, but as Acura’s photography suggests, the drive would likely take place on California canyon roads if the coronavirus didn’t exist. There, the TLX could shine thanks to a rigid new structure, a new turbo-4 engine, and an upgraded suspension with available adjustable dampers.

Instead of putting the redesigned TLX’s dynamic character to the test, though, I’m learning what it’s like to drive on a morning commute, which is the way most owners will drive it anyway.

Acura is aiming for performance, excitement, and emotion in its redesigned mid-size sport sedan. It’s hard for me to test the performance, but some of that excitement and emotion is expressed through the car’s sound, which I notice immediately when accelerating into traffic.

A new 2.0-liter turbo-4 is responsible for that sound. It’s an engine that rights one of the wrongs of the last car. It replaces both the pedestrian 206-horsepower 2.4-liter base inline-4 and the 290-hp 3.5-liter V-6.

The turbo-4’s tune is mostly relegated to the background in Comfort mode, but Acura starts to enhance the engine’s lower intake and exhaust sounds through the speakers in Normal mode and makes the sound almost intrusive during acceleration in Sport mode. It sounds good for a 4-cylinder, without the droning fours can create, but it could be too much for some drivers.

An Individual mode lets drivers choose different settings for the engine, steering, suspension (Advanced model only), interior lighting, and automatic start/stop feature, but Acura doesn’t separate engine sound from throttle response, so drivers can’t have both a quick throttle and a quiet powertrain. Returning TLX owners may find that off-putting.

On the other hand, buyers who want more sport in their sport sedans might appreciate that sound and the power that goes with it. The 272-hp turbo-4 is torque rich, spinning out 280 pound-feet of torque as low as 1,600 rpm. Those numbers represent gains of 66 hp and 98 lb-ft of torque versus last year’s base engine and 13 lb-ft of torque versus the outgoing V-6.

While Acura isn’t quoting a 0-60 mph time, an Acura rep told me it’s about the same as the last car’s V-6, which would put it at about 5.7 seconds. The new car weighs almost 200 pounds more than the outgoing model, so the engine is doing more work to achieve that 0-60 mph time while also delivering slightly better fuel economy at 22 mpg city, 31 highway, and 25 combined with front-wheel drive compared to 20/31/24 for the V-6.

Not an upscale Honda Accord

The Acura TLX and the TL before it were closely related to the Honda Accord. They shared platforms and powertrains, and buyers were right to say the Acuras were little more than upscale Accords with sport sedan aspirations. That’s no indictment because the Accord has been one of the best mainstream cars on the market for decades, but the TLX now aims to be more than an upscale Accord.

The 2021 Acura TLX splits off from the Accord with its own, exclusive platform and a more sophisticated suspension design. The new body structure boasts 50% more torsional stiffness and it’s almost twice as stiff where the suspension meets the body. The front suspension switches from MacPherson struts to double wishbones, which Acura says provides greater tire contact patch, a lower ride height, and less body lean in turns. The rear suspension continues as an independent multi-link setup.

The weight moves around as well. Using aluminum front damper mounts and front fenders cuts almost 30 pounds from the nose, and moving the battery and its mounting hardware to the trunk moves 52 pounds from the front to the rear. This helps change the car’s front/rear weight bias from 60/40 to 57/43, which is still a bit too nose heavy. A new variable-ratio electric-assist power steering system delivers quicker steering response, NSX-derived electro-servo brakes provide a shorter, firmer pedal, and available adjustable dampers allow for variable handling and ride quality for the first time.

I can only find stolen moments on these suburban roads to test the TLX’s handling, but the car’s quicker steering is evident from the outset. The wheel feels light in my hands in all but the Sport mode, where it firms up nicely.

The variable steering ratio helps the TLX drive smaller than its size, and the 255/40R19 Michelin Primacy tires provide good but not great grip because they’re all-seasons not stickier summer tires. The steering is 22% quicker in low- and mid-speed conditions, and the TLX responds dutifully to those commands. The steering is also 15% quicker at high speeds, which is just right to maintain a stable on-center feel and high-speed stability.

Body lean is minimal through the few roundabouts and sharp corners I can find, and the car recovers quickly to straighten out or head in another direction.

If these were California canyon roads, the TLX’s Super-Handling all-wheel-drive system could come into play. It can send up to 70 percent of the power to the rear axle and vector all of that torque to the outside rear wheel to help the car rotate more willingly. I’m sure those roads would reveal a playful car that carves sharply through corners but tends toward understeer when pushed hard due to its nose-heavy weight bias. With its front-drive platform and heavier nose, the TLX falls short of being a dynamic match for a rear-drive BMW 5-Series, which costs much more, or the 3-Series, which has less space and a similar price. It slots in as a rival for the Lexus ES F-Sport or VW Arteon, though with better looks and sharper moves, especially with all-wheel drive.

On these suburban roads, the standard dampers provide a firm but comfortable ride. The Advanced model’s adjustable dampers deliver a smooth and controlled ride in Comfort mode and become slightly stiffer than the base dampers’ setting in Sport mode without rattling my fillings. In no mode is the TLX’s ride as firm as the engine is loud during heavy acceleration.

Front driver with a rear-drive look

The changes in the suspension are reflected in the car’s profile. Compared to the 2020 model, the new TLX is 2.9 inches longer, a half inch lower, and 2.2 inches wider, and it rides a wheelbase that grows by 3.7 inches. The cabin is pushed back, and the dash-to-axle ratio grows by 7.8 inches, which imparts a sleeker, sportier, long-hood rear-drive look. Despite that extra length between the dash and front axle, the engine doesn’t move back to further help the front/rear weight bias. An Acura rep told me that’s to make room for the wider turbo V-6 that will go in the Type S model.

The new profile creates a sportier look that is enhanced by the details of the design. Highly influenced by the Acura Type S concept car the brand showed last year in Pebble Beach, the design flows rearward from the new Acura face with its five-pointed grille and slim headlights. Lines and creases create that flow without looking too busy. Wide shoulders at the wheels create a planted look and the long greenhouse resolves into a short deck that plays off the long hood to give the car sport sedan proportions. The 18- and 19-inch wheels and tires fill the wheel wells nicely, too, without being too big for best comfort. It’s a sporty, cohesive design that will be the car’s biggest draw.

Inside, the TLX’s ambience ranges from serene to sporty, depending on the model and colors chosen. The look is especially racy in A-Spec model with its available red and black leather upholstery, aluminum trim, and standard flat-bottom steering wheel. That’s only enhanced by the NSX-inspired rotary knob mounted on the center stack to change drive modes. Opt for the tan upholstery and blonde wood trim and the cabin feels more luxurious and relaxing.

The cabin takes cues from the RDX crossover SUV as well. They include high-quality materials with available contrast stitching, comfortable and supportive front bucket seats, and Acura’s infotainment system with its 10.2-inch center screen controlled by a center console touchpad with absolute positioning technology. I’m not a fan of a system that requires such pin-point accuracy while driving, but it becomes easier as I realize I’m not pushing around a cursor and my finger position translates to the tile positions on the center screen. The palm rest also makes it easier to be precise with my commands.

While the car is bigger than the 2020 model, the cabin is about the same size. Rear leg room and head room are slightly increased, which improves the comfort of a rear seat that has more thigh support than most vehicles on the market outside of SUVs with rear captain’s chairs. However, both head room and leg room will be tight for anyone over 6-feet tall, and the trunk’s 13.5 cubic feet of cargo volume is small for the class.

Covid-19 may have robbed me of the chance to experience the 2021 Acura TLX on twisty California roads, but I can still tell that this car captures the emotion and excitement Acura was aiming for with its good looks, frisky engine note, and improved handling. The new TLX likely can’t match the dynamics as its rear-drive rivals, and its engine sound may elicit some emotions Acura wasn’t intending, but it splits the difference between comfortable upscale commuter and exciting sport sedan at a reasonable price.

Acura paid for a hotel and provided a day with the TLX to bring you this firsthand report.