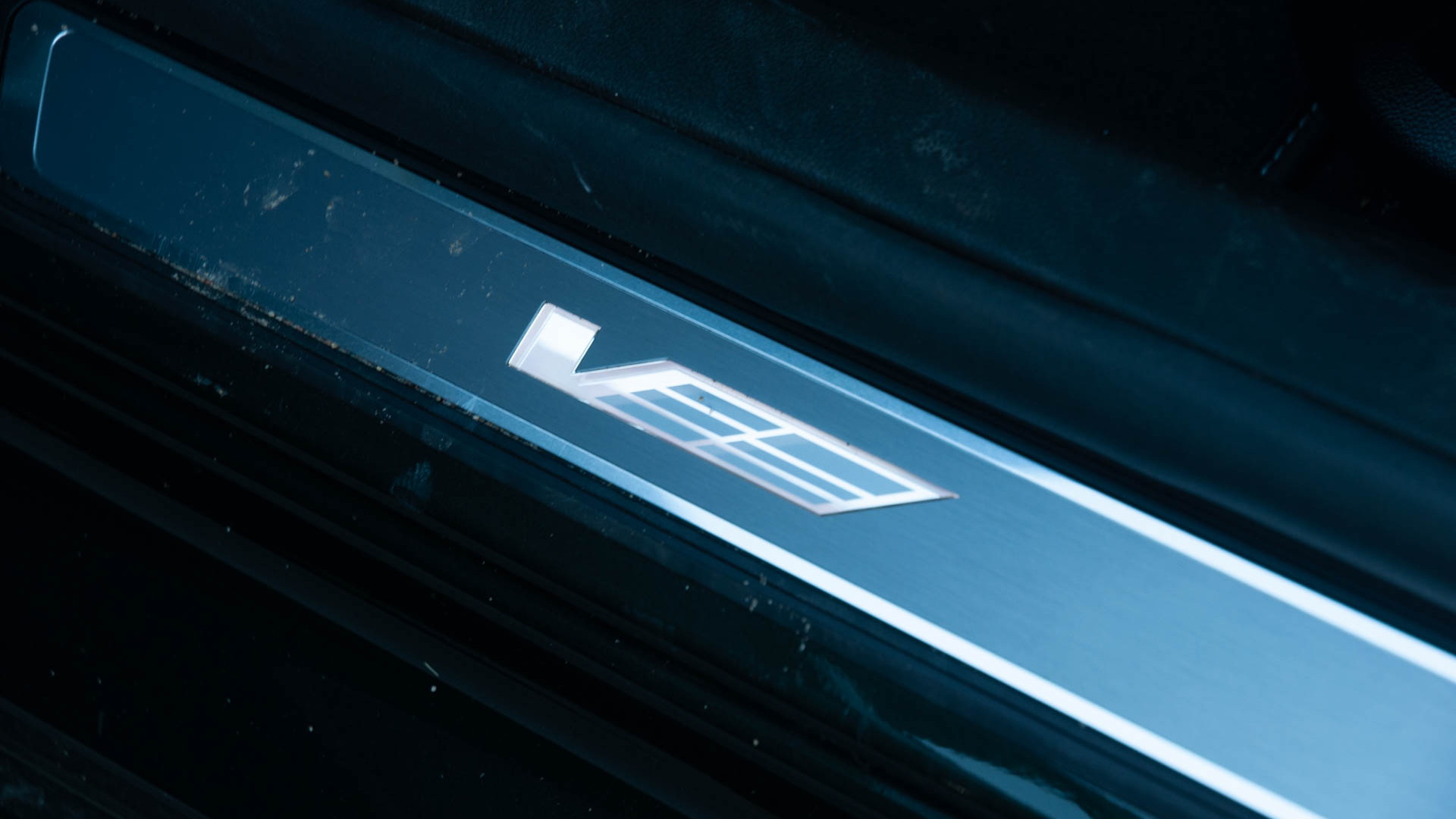 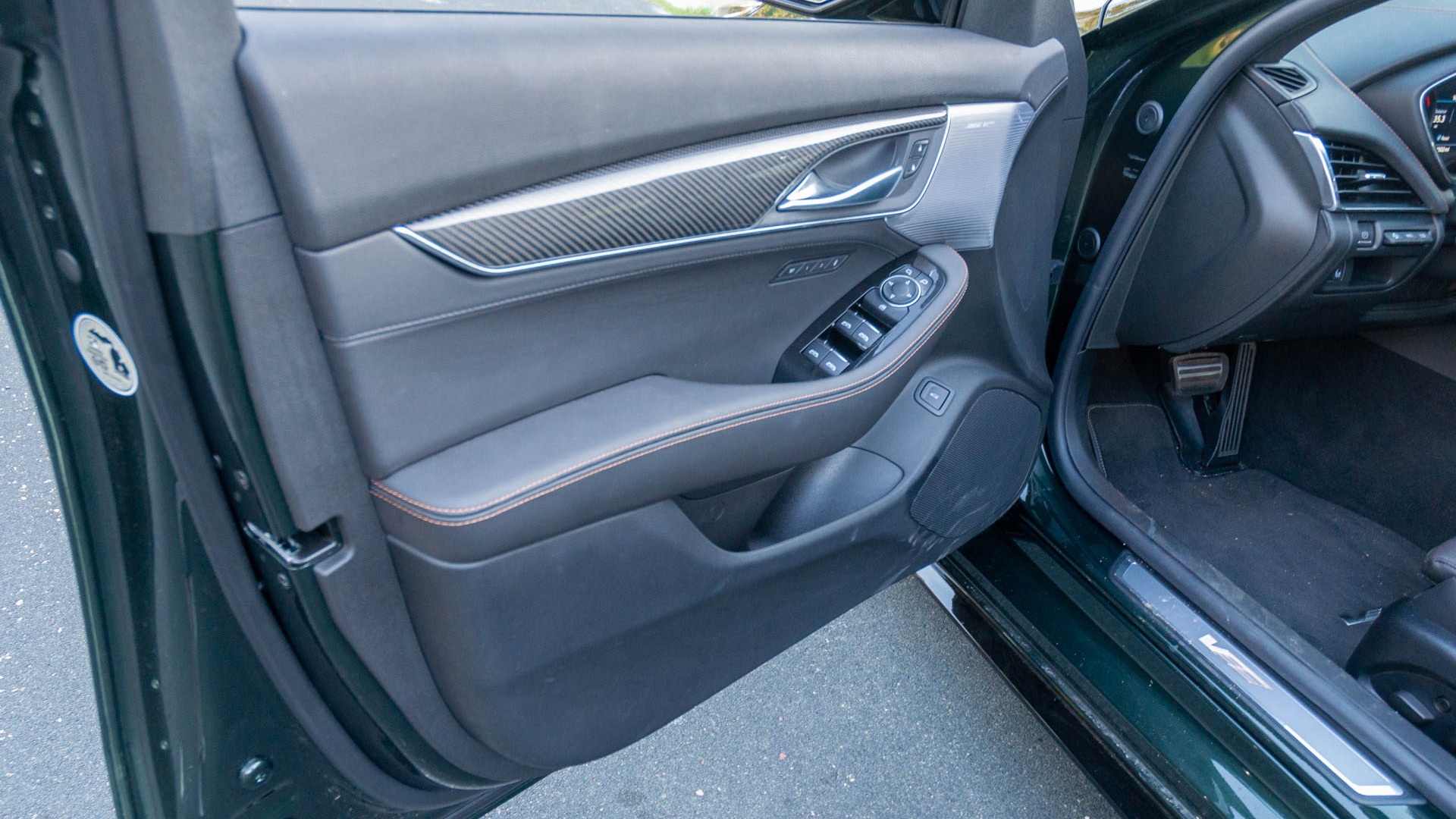 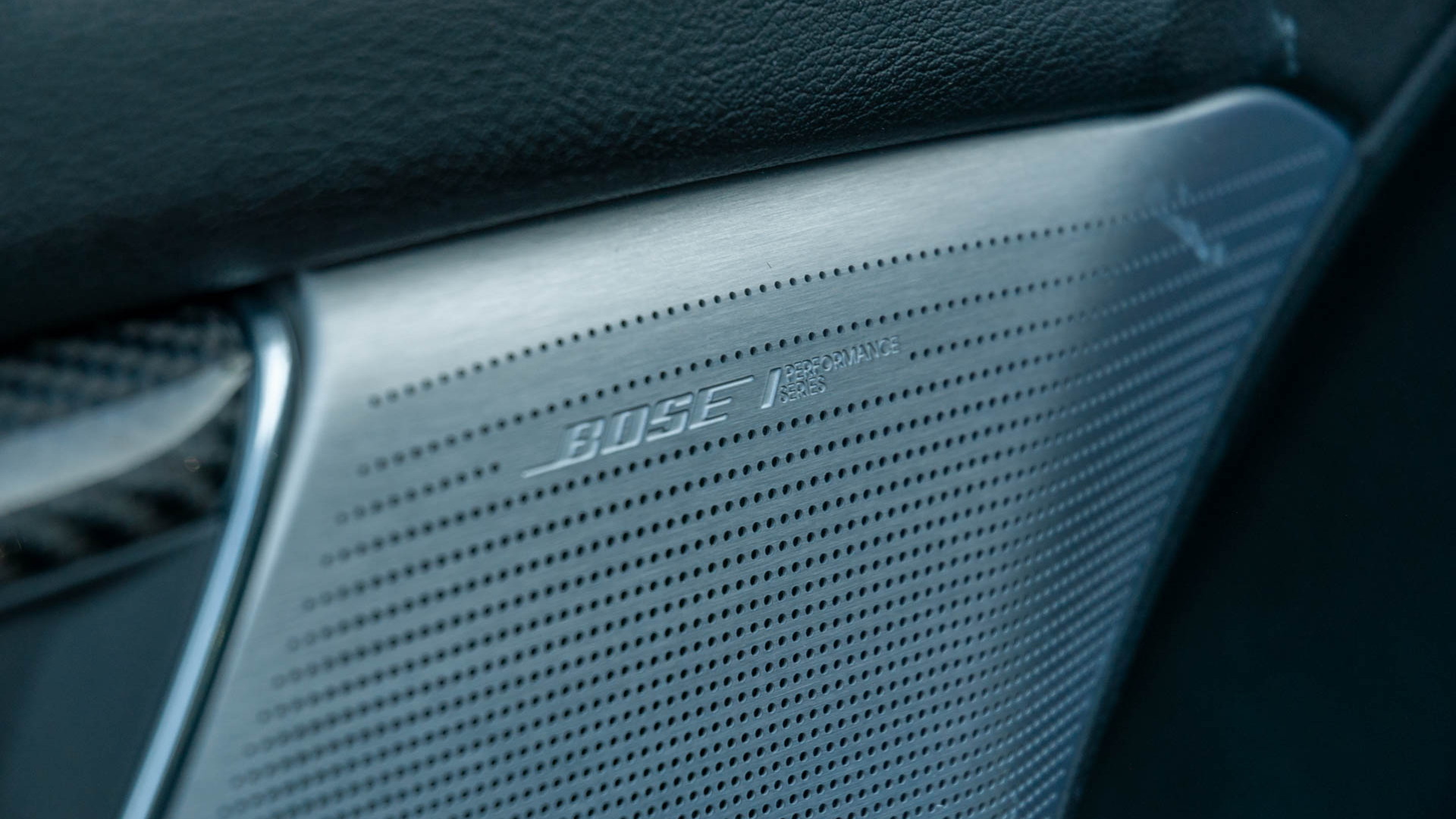 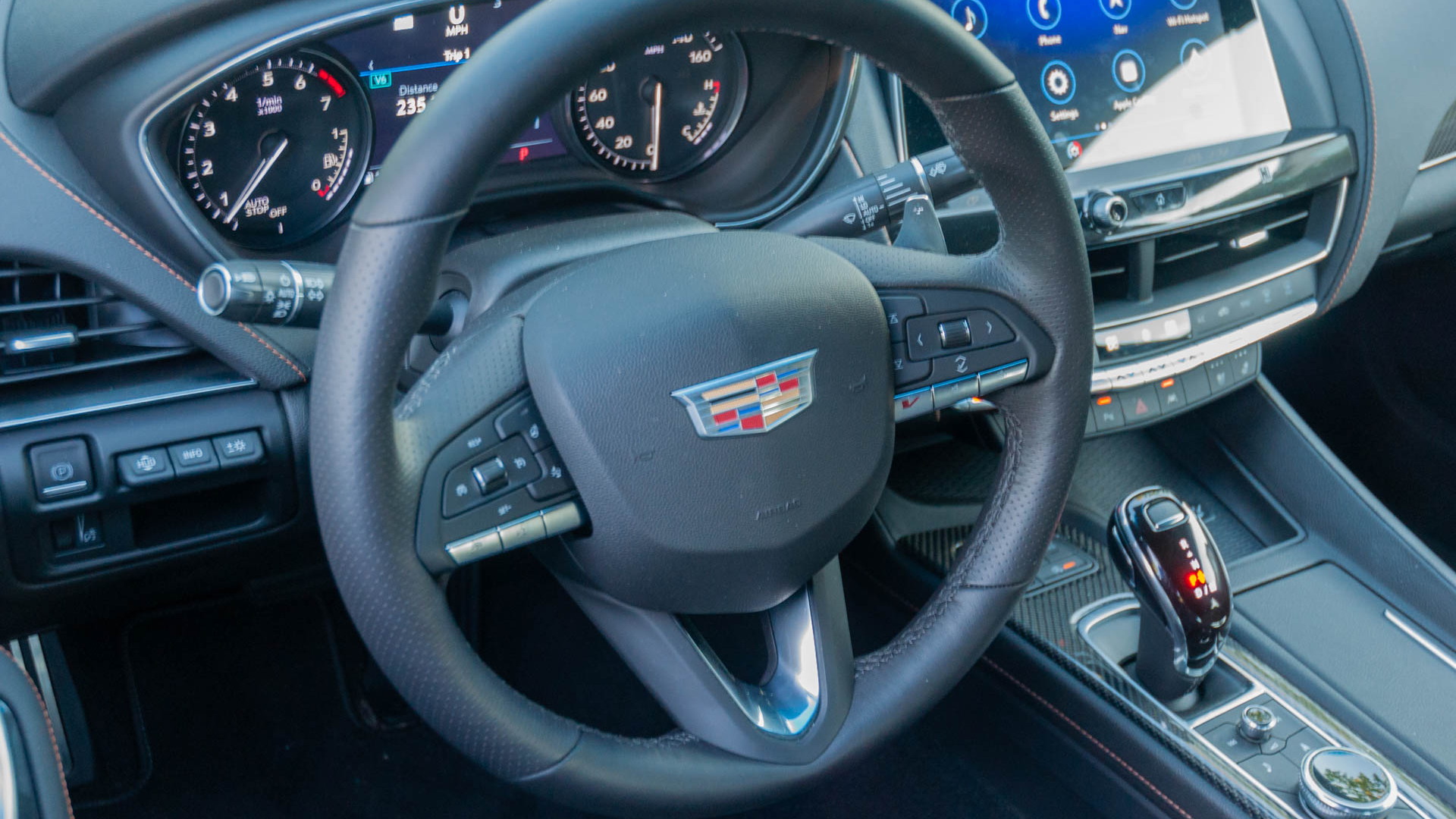 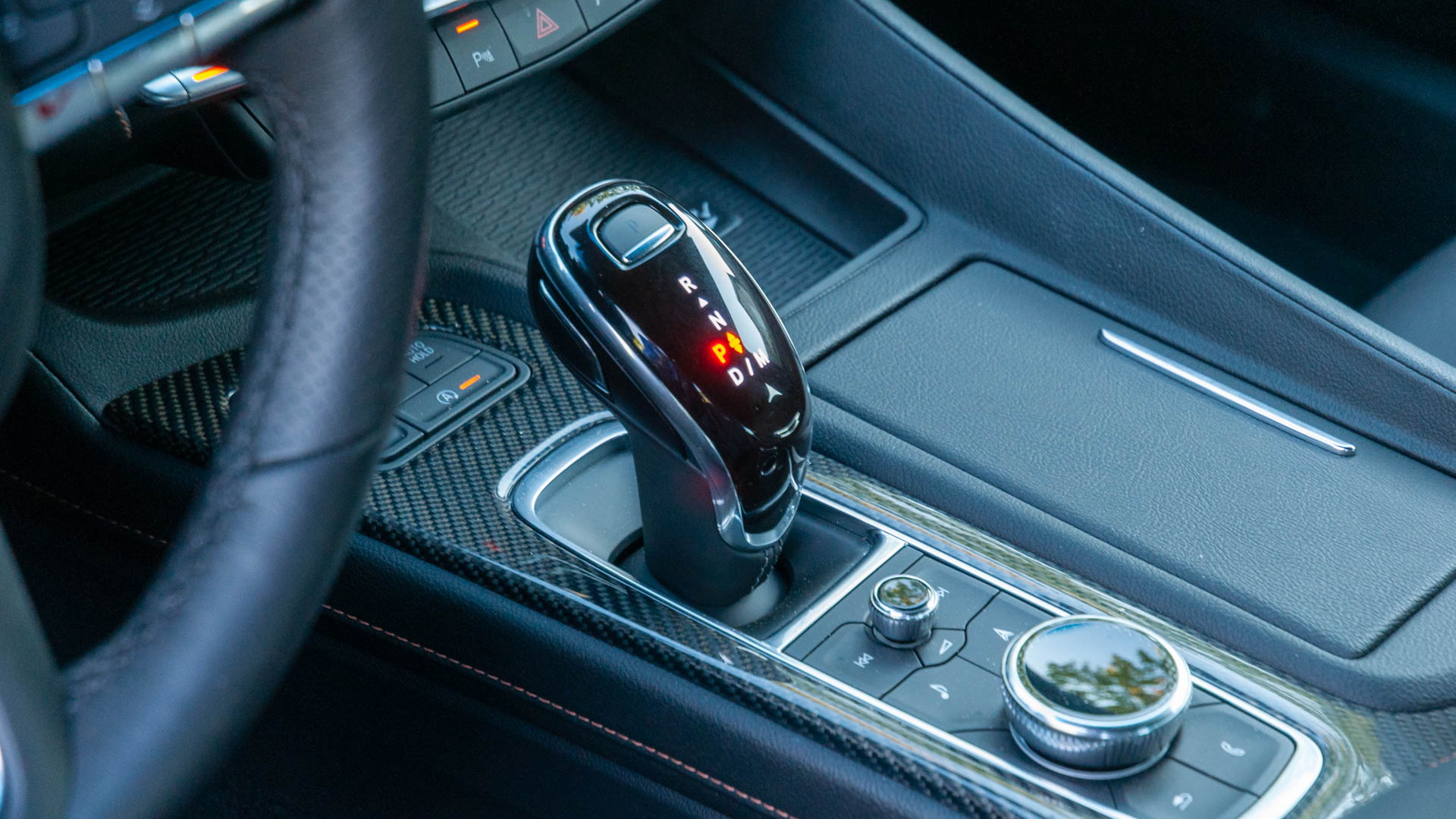 Cadillac’s future is electric cars that double as opulent showcases of technology and design. The 2020 Cadillac CT5-V offers none of that.

With a turbocharged V-6 powertrain, new naming conventions, a pretty but confused design, and sharp dynamics, the 2020 Cadillac CT5-V delivers on the automaker’s previous goals and none of its future promises.

I spent a week running errands and taking the kids to camp in the 2020 Cadillac CT5-V. Here’s what I learned.

The CT5-V’s design isn’t a home run, but it looks good. The sharp creases, fast roofline, upright front end, and horizontal headlights are all nods to the gorgeous 2016 Escala concept. The V’s quad exhaust finishers, blacked-out trim, and tinted taillights amp up the aggression.

Miss: But it’s not the Escala

The Escala concept was a hatchback. The CT5-V apparently wants to be a hatchback (see that roofline and C-pillar?), but it’s not. It’s a sedan. The rear door cutlines leave an upright window edge with a small piece of window glass that looks as if it were pulled out of the Saturn Ion parts bin. Behind that is a C-pillar with a black plastic filler that looks like a cheaper rendition of what’s found on the Honda Accord. The rear of the greenhouse needs a more cohesive design. The CT5 would be better as a hatchback because that would grow the small 11.9 cubic foot trunk with its small opening into usable space.

The steering in the Cadillac CT5-V isn’t Alfa Romeo Giulia quick, but it’s sharp, precise, and adds to the car’s responsive handling. Based on the same Alpha platform as the outgoing ATS and CTS, the CT5-V features a twin-pivot MacPherson strut front suspension and five-link rear suspension that both communicate what’s going on at the road level while maintaining the CT5-V’s composure.

The CT5-V is powered by a twin-turbo 3.0-liter V-6 with 360 horsepower and 405 pound-feet of torque mated to a 10-speed automatic transmission. Rear-wheel drive is standard, though my tester was equipped with all-wheel drive. In this configuration, the CT5-V carries EPA fuel economy ratings of 17 mpg city, 25 highway, and 20 combined. In a week of suburban driving my tester averaged 17.3 mpg, which is short of the 20 rating. A BMW 5-Series with a turbo-6 and all-wheel drive has EPA ratings of 22/29/27. The Cadillac falls short here.

The outgoing CTS had a small rear seat. The CT5 doesn’t. The CT5 has plenty of rear knee, leg, foot, and head room. It’s comfortable for two adults, though three would be a squeeze.

The rear seat package rectifies the CTS’s rear space issues, but the seat itself is mounted low, which means you won’t slide easily into and out of the rear seat as if it were Grandpa’s Cadillac. Entry requires bending down to avoid the intruding roofline, and the seat sits so low that getting out requires more core strength than grandpa still has. The low seating position also lacks the thigh support needed for long-trip comfort.

Turns out using an old platform for a new car isn’t always the best idea. The Alpha platform from the ATS and CTS was set up perfectly for engaging driving dynamics, but it compromised interior packaging. The issue becomes worse with the CT5 as the platform needed to be modified to meet current safety standards and to fit the 10-speed automatic transmission. The result? The center tunnel intrudes into both the driver and front passenger footwells to make room for the transmission.

Not all V-6 engines, especially turbocharged V-6s, sound good, but this one does once the active exhaust opens up. At higher RPMs the CT5-V’s twin-turbo 3.0-liter V-6 sings a sweet tune that is more AMG V-6 than BMW inline-6. Its pitch has more grunt with an alto wail at full throttle.

BMW has the 6-cylinder on lockdown while Cadillac doesn’t. As good as the CT5-V’s note is at full throttle, it disappoints while cruising around. It’s more coarse and gravely, more in line with Audi’s latest turbocharged 3.0-liter V-6, which isn’t a compliment.

The CT5 lineup is priced like a car of the next smaller size class. It’s a value, which we couldn’t say about the CTS. My tester cost $57,310 and featured LED lightning, a Bose sound system, a head-up display, a 10.0-inch touchscreen, automatic emergency braking with pedestrian detection, and a variety of performance upgrades for the V model (even though V is now a middle-of-the-road performance model instead of the top performer). A similarly equipped 3-Series with a turbo-6 would cost more and a 5-Series would cost much more.

The CT5-V has nothing to do with Cadillac’s future and it already seems irrelevant given the market’s move away from cars and toward crossover SUVs. Buyers also don’t know what a CT5 is, as Cadillac gave up on the CTS name, which had barely taken hold in consumers’ minds after almost two decades. Cadillac is moving back to real names, all-electric cars, and a focus on being the design, luxury, and tech standard of the world. The CT5 delivers on none of those things. The Lyriq and Celestiq are Cadillac’s future and the new CT5 is already its past.

The 2020 Cadillac CT5-V delivers a strong value with sharp driving dynamics and comfortable ride for four adults, but it’s not efficient and we fear it will get lost in Cadillac’s move to go electric.