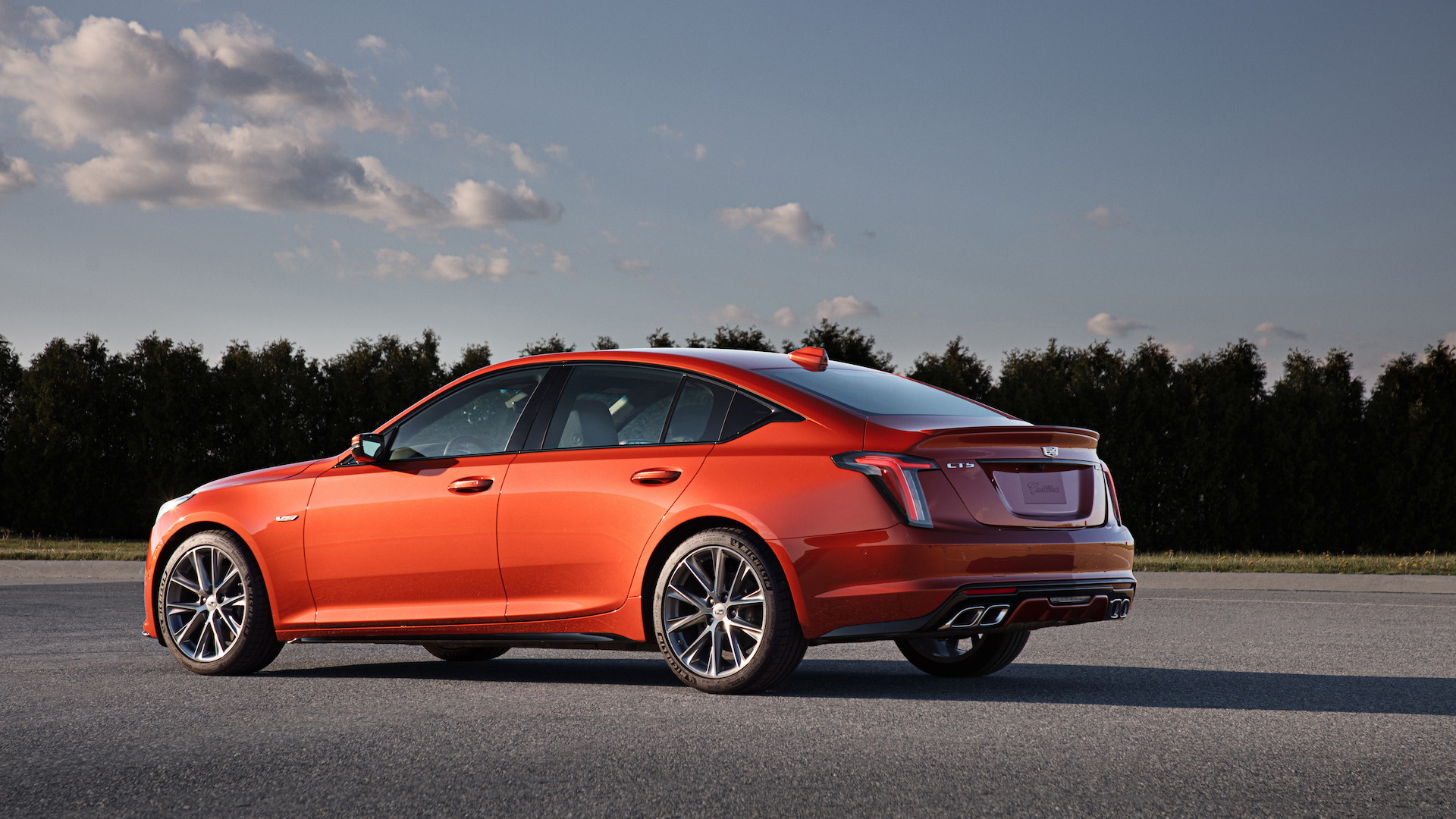 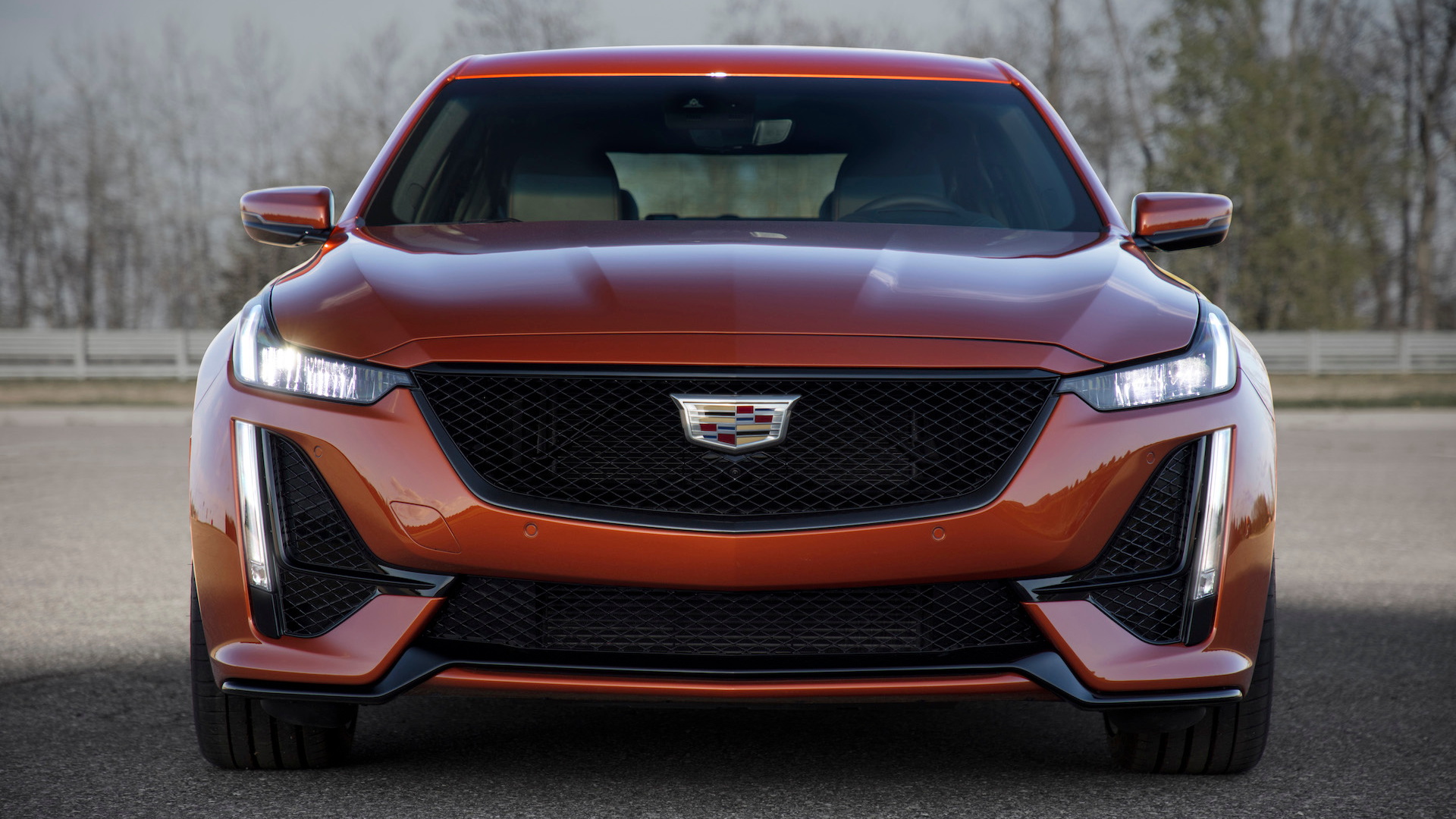 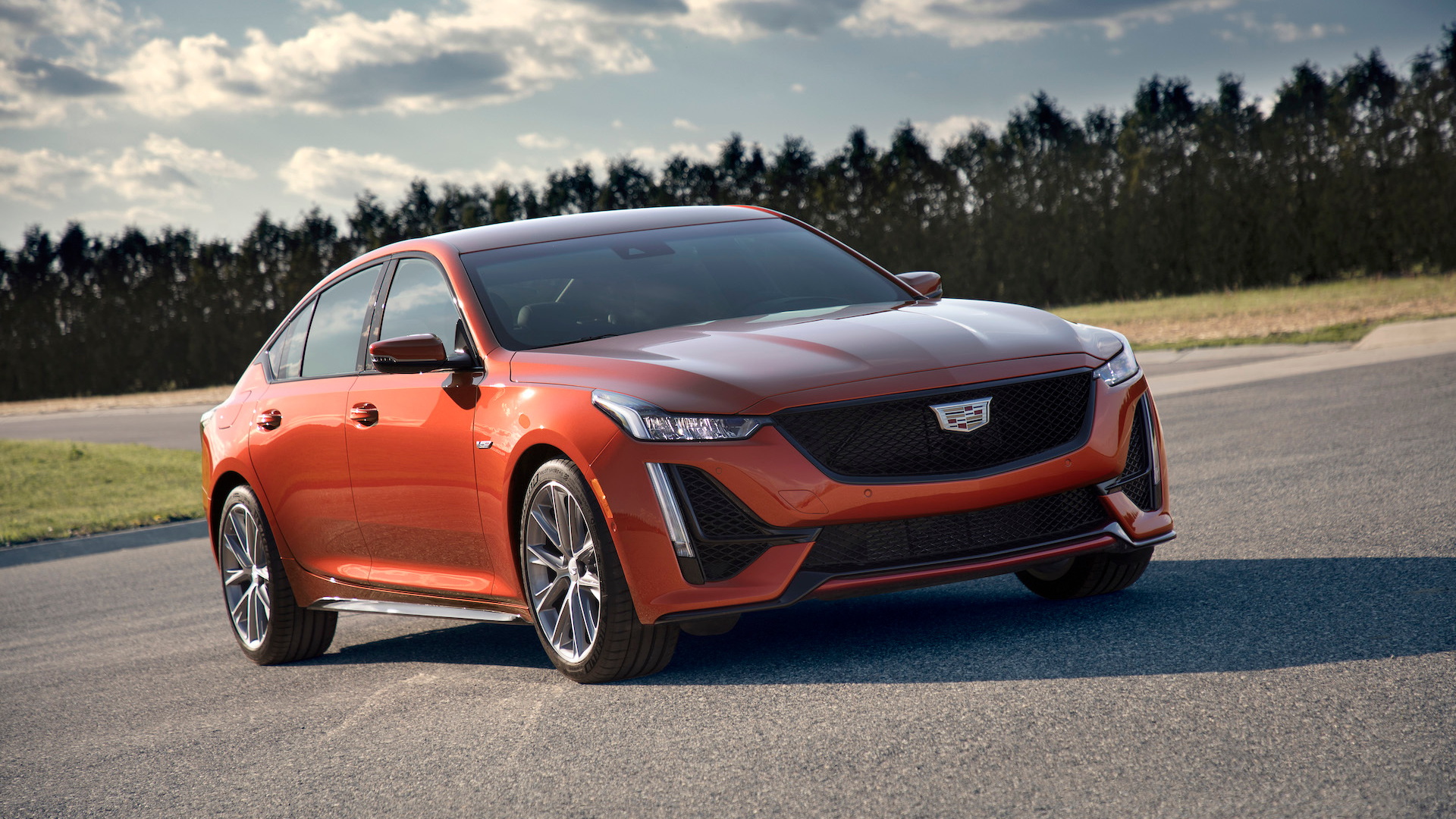 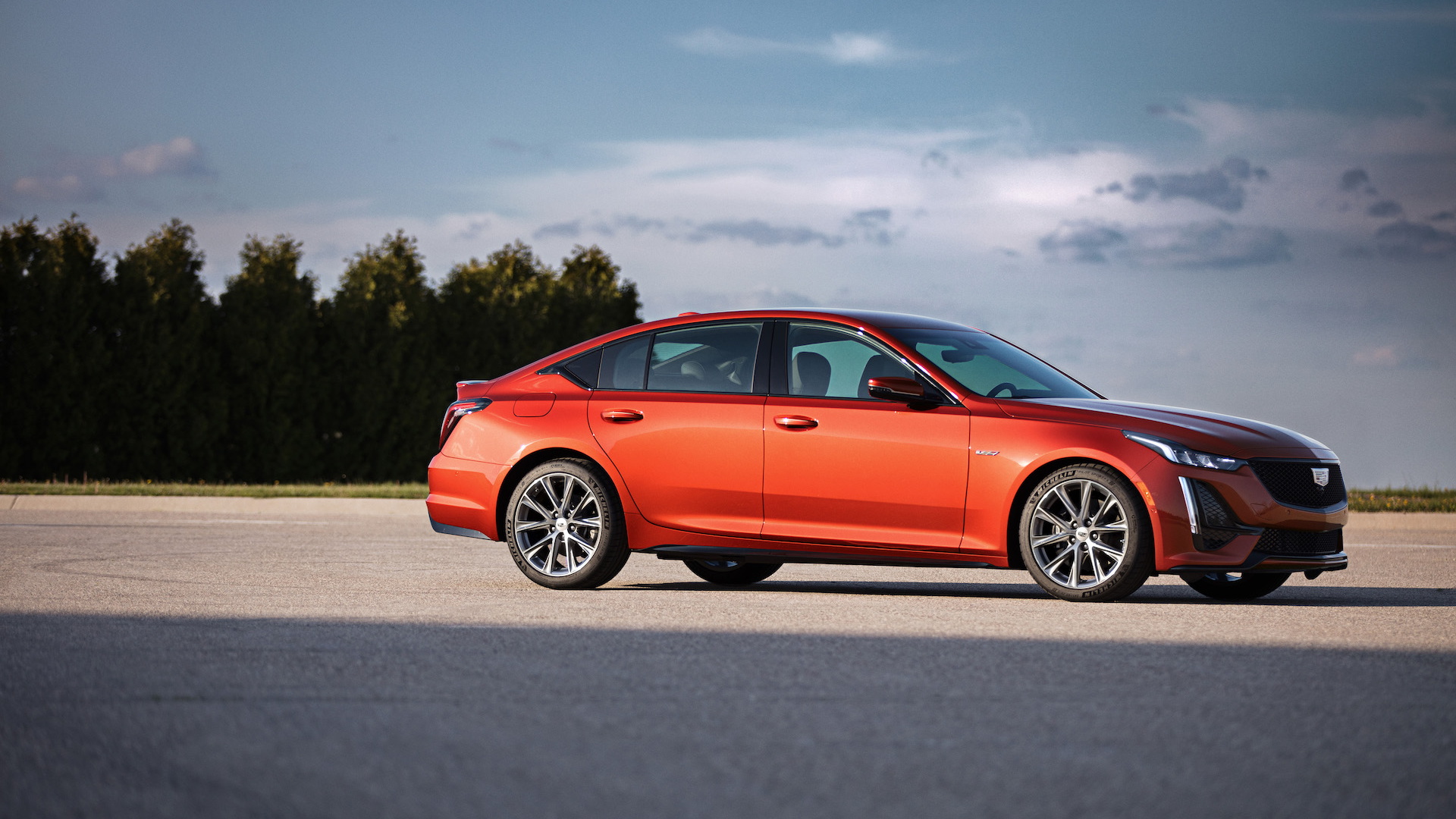 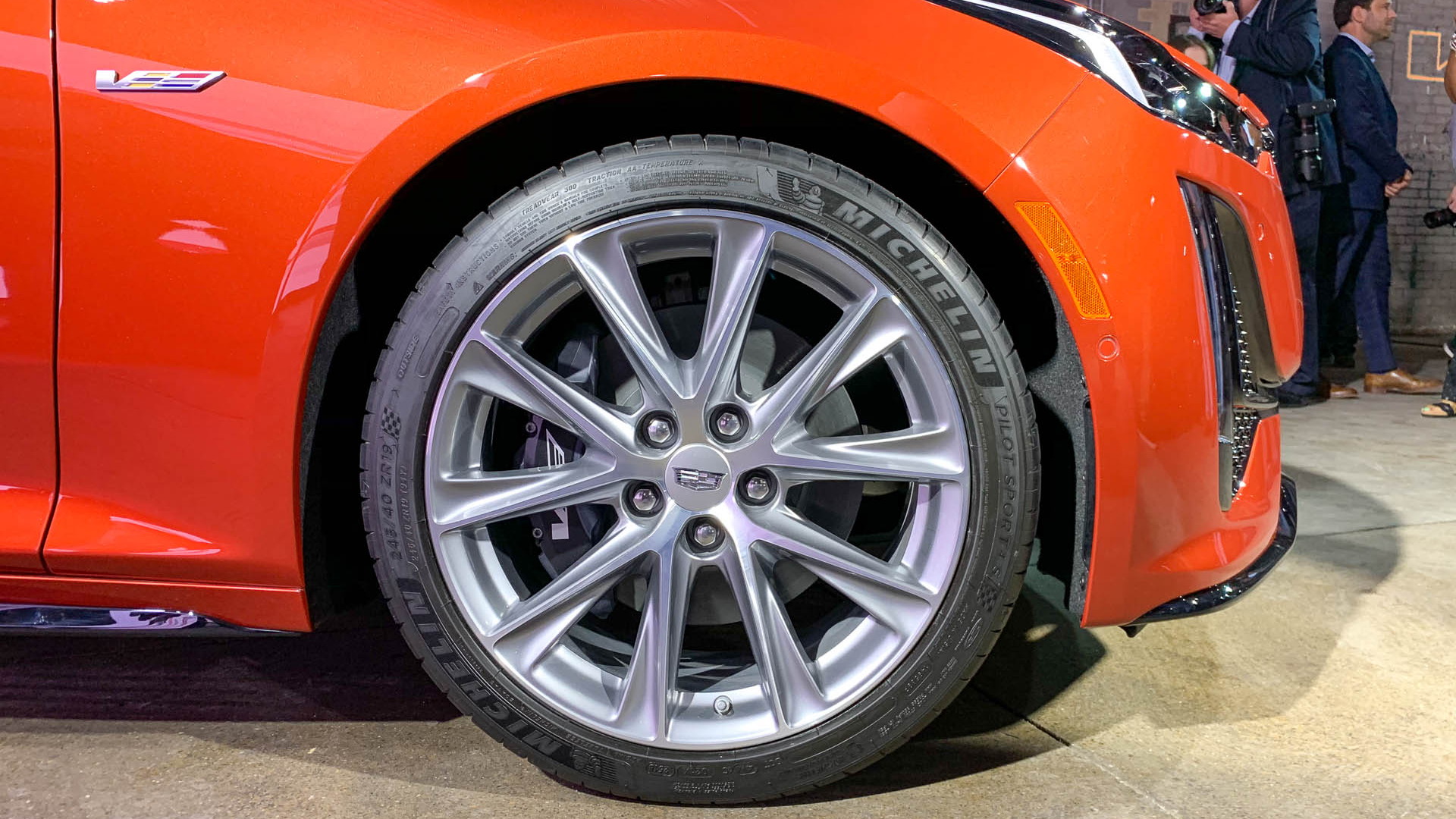 Ever since the release of the Catera for the 1997 model year, Cadillac has been trying to build a European-style sport sedan that will convince buyers Cadillac isn’t just another stodgy also-ran.

Cadillac’s attempts have gotten better and better since a slow start with the Catera. The CTS followed in 2002 and was closer to the mark, though it lacked the interior quality to compete with the likes of Audi, BMW, and Mercedes-Benz. The second- and third-generations of CTS were good cars but not German good. The last CTS was every bit as accomplished dynamically as a BMW 5-Series, but it cost too much and its engines couldn’t match those of German competitors.

Now, with the release of the 2020 CT5-V, Cadillac has hit the mark, but it may be too late. The CT5-V has the dynamics of a BMW, the interior quality luxury buyers expect, a competitive engine, and a price that screams value against its more sought-after rivals. Unfortunately, it comes at a time when the crossover SUV is killing sedan sales and nameplates.

Cadillac has also had a problem sticking with a consistent marketing message. The 2020 Cadillac CT5-V is a prime example. The V name used to mean buyers were getting a full-on track star, with a big engine, big brakes, and plenty of cooling. Cadillac worked hard to make the V name equate to BMW’s M or Mercedes’ AMG. Buyers who were interested in the half measure could go with a V Sport model, just like BMW’s M Sport, for modest power and performance upgrades. Now V equals V Sport and Blackwing equals V, even though Cadillac’s one-and-done Blackwing engine isn’t part of the equation. Got that? No? Who would?

That’s too bad because the 2020 Cadillac CT5-V is one fine automobile.

The CT5-V is the current line-topper before a CT5-V Blackwing arrives, likely as a 2021 model. The CT5-V features an upgraded engine to compete with the inline-6s from Mercedes and BMW. While the base engine is a new 2.0-liter turbo-4 that makes 237 horsepower and 258 pound-feet of torque, the CT5-V draws its motivation from a twin-turbo 3.0-liter V-6 that conjures up 360 hp and 405 lb-ft of torque. A 10-speed automatic is the lone transmission, and buyers can choose from rear- or all-wheel drive.

The twin-turbo V-6 offers plenty of gusto. Its torque arrives low in the rev range like a rolling wave to slingshot the car off the line. The 0-60 mph sprint takes just 4.6 seconds, according to Cadillac, a figure that feels right based on a few on-ramp runs up to freeway speed. At speed, passing power is also just a matter of a few millimeters of throttle pedal travel, thanks to the quick-shifting 10-speed.

However, the sound is neither refined nor gutsy. The twin-turbo V-6 drones quietly in the background when cruising, but sings an alto wail when pushed. It’s neither as smooth nor as melodious as inline-6s available from competitors, but it feels as powerful. 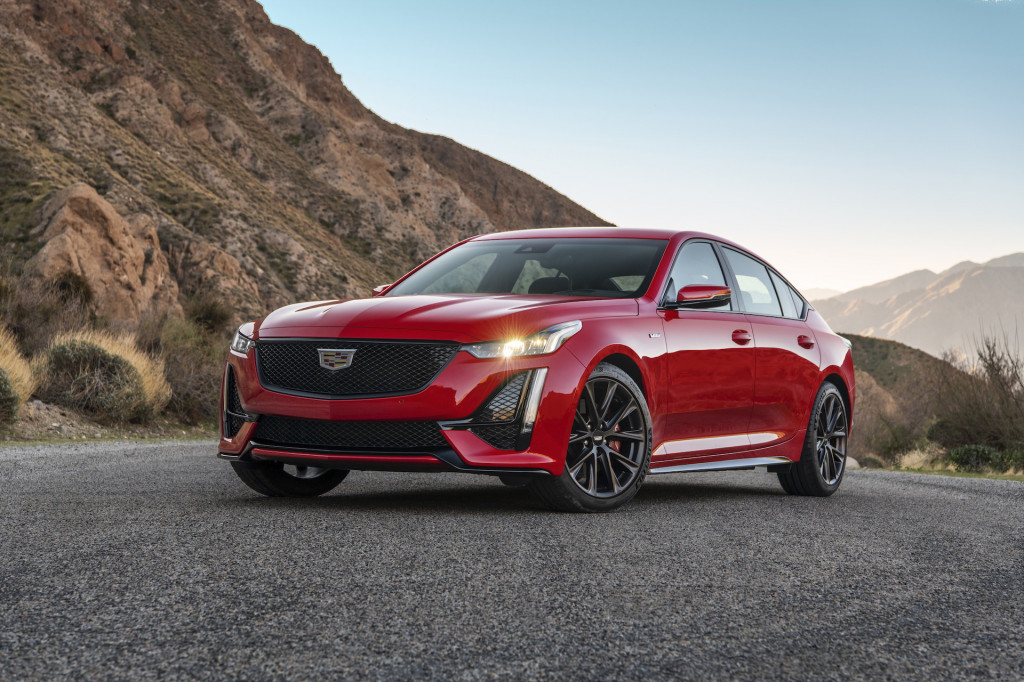 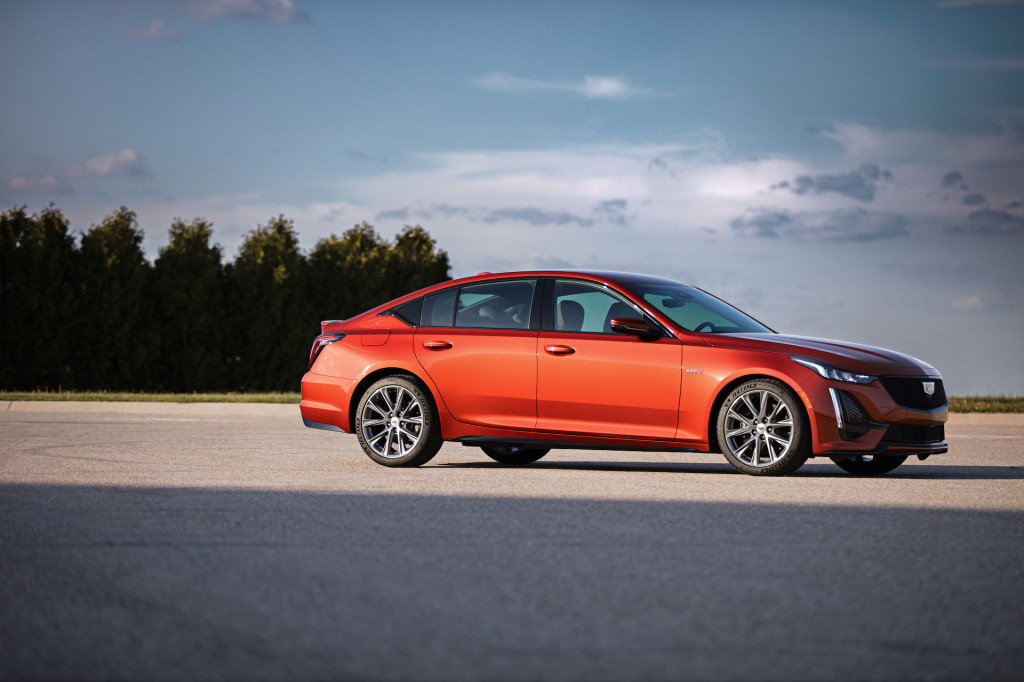 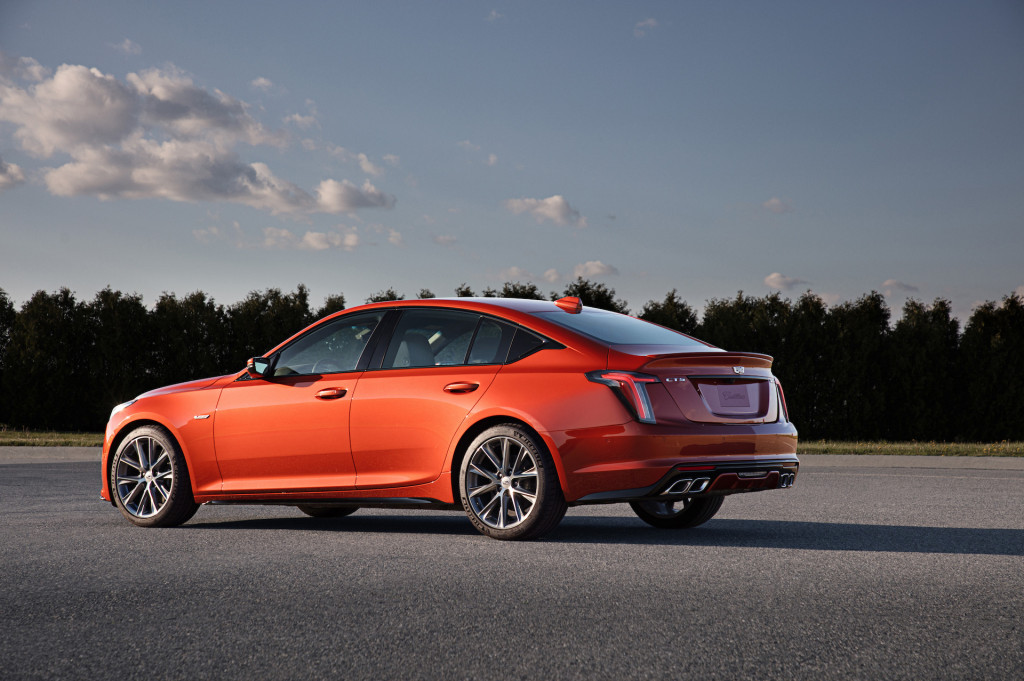 Cadillac didn’t have to play catch up with the CT5’s structure. Based on the excellent Alpha platform from the CTS, ATS, and Camaro, the CT5’s structure is merely tweaked instead of revamped. The Alpha platform was already plenty stiff and its double-pivot MacPherson strut front suspension and five-link independent rear suspension already did a good job of locating the tires for excellent grip and road feel.

This time around, Cadillac concentrated on stiffening the suspension-to-body mounts, and improving ride quality and noise, vibration, and harshness. Much of that involved changing bushings to provide softer suspension tuning without giving up steering precision and handling.

These changes, teamed with the CT5’s sport-tuned suspension, well-tuned electric assist power steering, and standard adaptive and adjustable magnetic dampers, create the kind of ride and handling balance I like in a car. Feel and responsiveness are king. Ride quality and noise reduction are subservient to those goals, but the CT5-V is never too firm or too loud. The magnetic dampers do a great job of smoothing out the ride while enhancing handling. Softer would be more comfortable but less interesting.

The CT5-V weighs almost 4,000 pounds, so there is some lean through corners, but it’s controlled and the right amount of lean is read as feedback instead of tippiness. The front wheels go where I point them, and the tail follows along dutifully. The front end’s response to my steering inputs is immediate, the wheel tells me what’s going on at road level, and the steering is quick but stable on center without being twitchy.

The CT5-V is more agile than its size and weight would suggest, too, aided by a standard electronically controlled limited-slip rear differential and sticky P245/40R19 Michelin Pilot 4S summer-performance tires.

Four-piston front Brembo brake calipers clamp down on 13.6-inch discs to arrest the speed the CT5-V invites. The brakes work well for the street, but the rear brakes use single-piston calipers and 12.4-inch discs, so this isn’t a track setup. 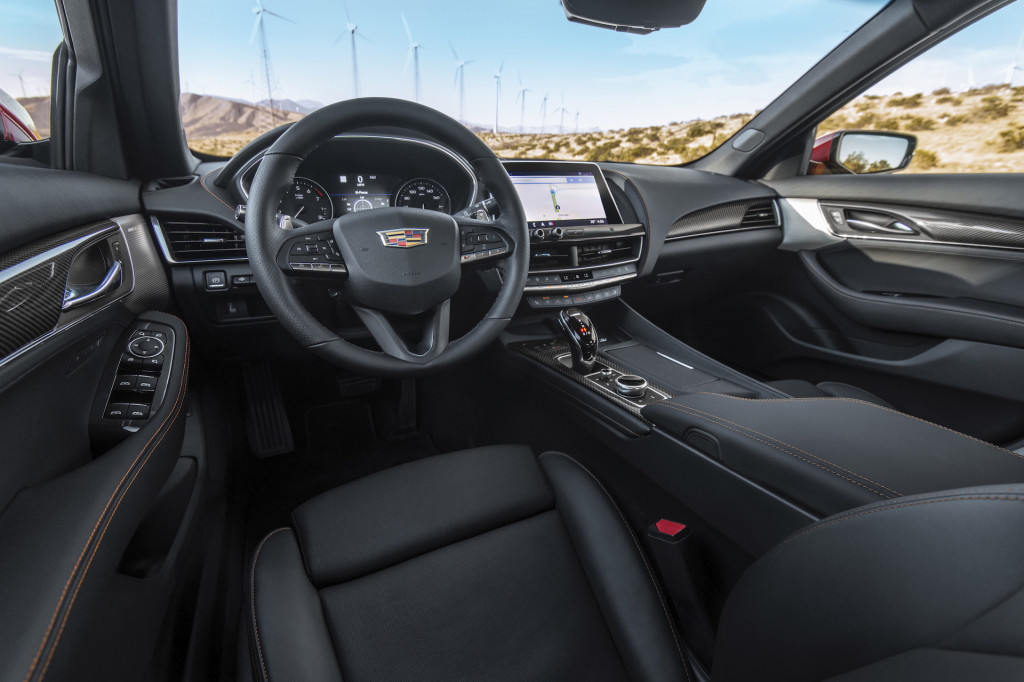 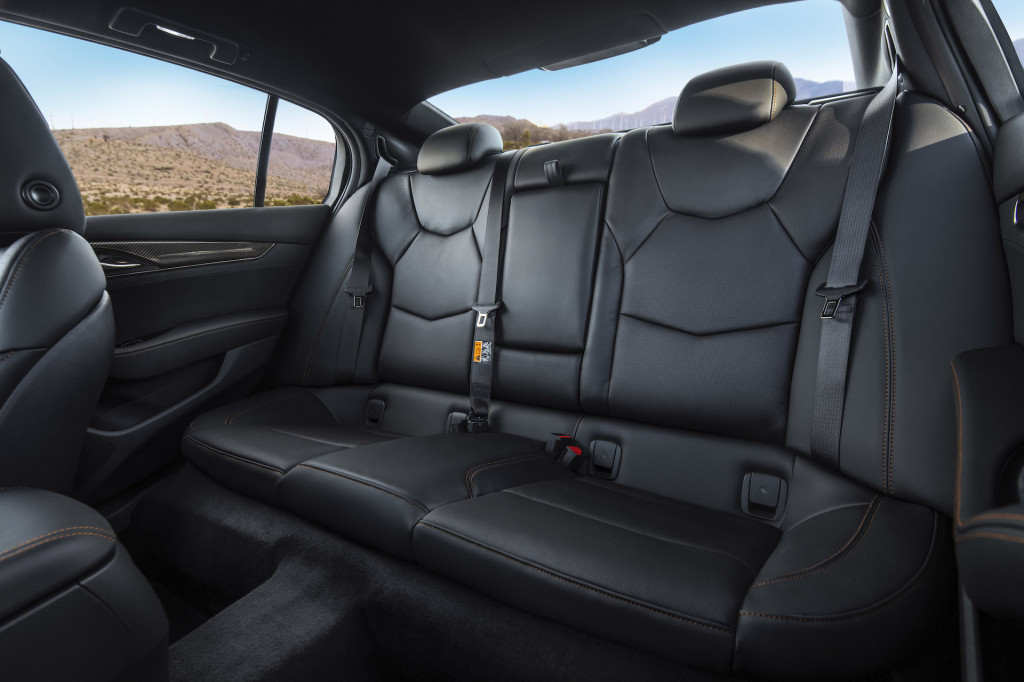 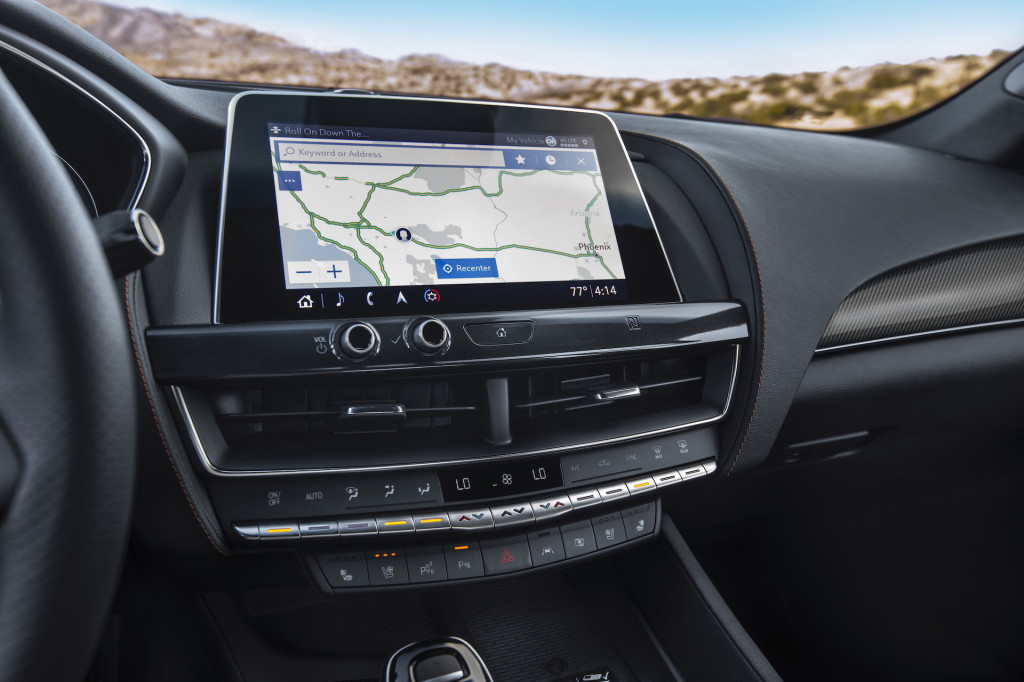 Inside, the 2020 CTS-V is equal bits sporty, spacious, luxurious, and monotone. Sport bucket seats, alloy pedals, and a small-diameter steering wheel provide the sporty looks. So does the black upholstery, though synthetic leather is standard.

The all-black cabin is broken up by lines of aluminum buttons on the dash and steering wheel and carbon-fiber trim, also in black. Want leather and/or an interior color other than black? That’s a minimum charge of $6,990 and it ranges up to $13,000 for semi-aniline leather as Cadillac bundles in other options packages with leather. Nonetheless, all that black has a high-quality look and feel thanks to wrapped surfaces with contrast stitching on the dash, doors, and center console.

Front seat occupants get the best deal, as Cadillac makes 18-way power adjustments standard for the CT5-V’s front seats. The sporty buckets will conform  to keep riders supported and firmly in place.

The CT5’s longer wheelbase gives rear seat passengers an additional 2.5 inches of leg room versus the CTS, which creates lots of space, but the sloping roofline limits head room for anyone over 6 feet tall. The fastback roof also limits the size of the trunk’s opening, and the trunk’s cargo space is just 11.9 cubic feet, which would be small for a compact car let alone a mid-size like the CT5. 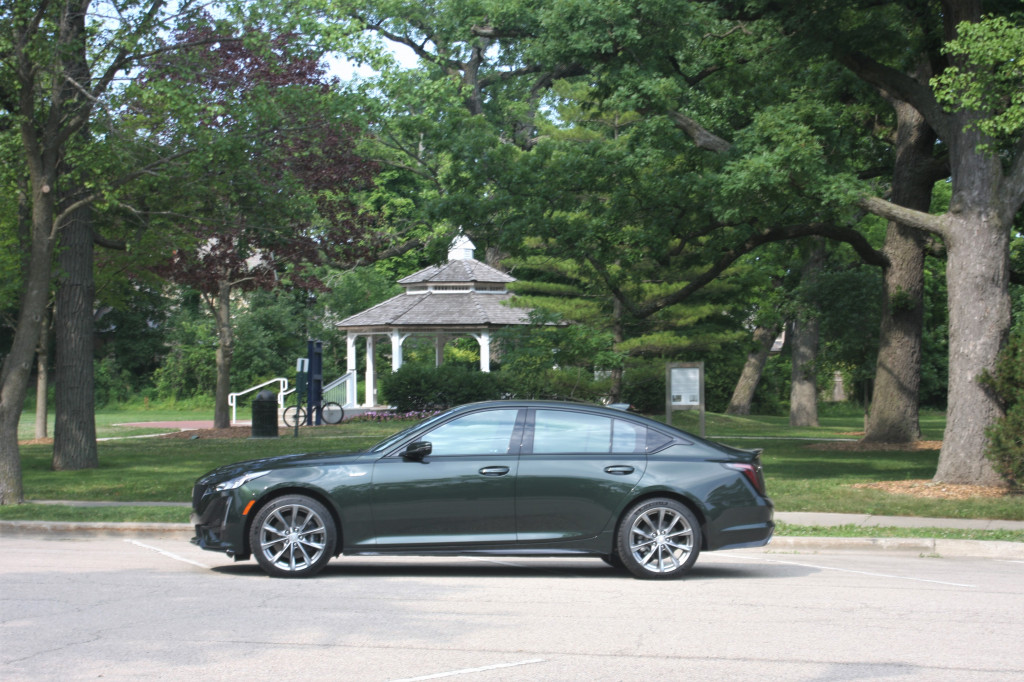 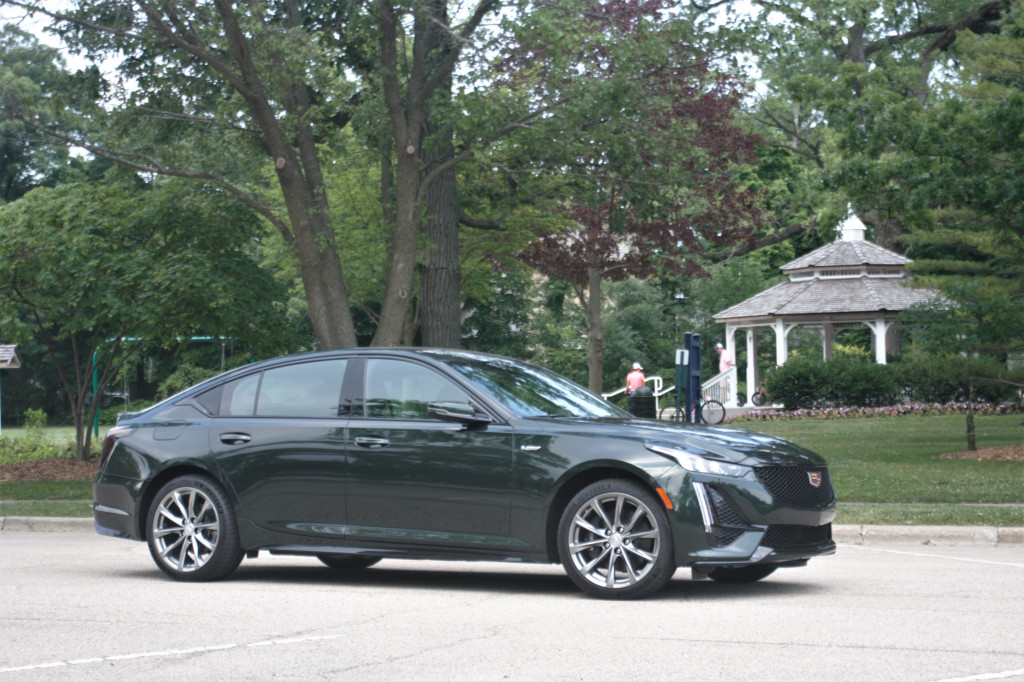 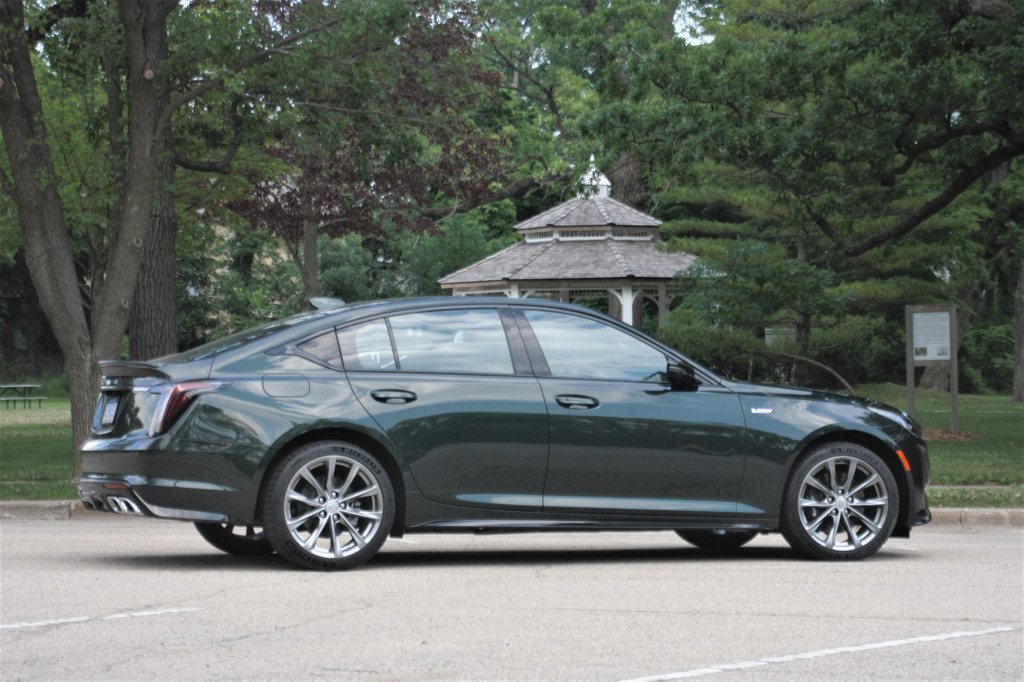 Front seat occupants will also benefit from the CT5’s tech features. The standard 10.0-inch touchscreen has large icons that are easy to touch, and its high resolution gives it the best rearview camera display I’ve ever seen. Drivers can also control the screen with a rotary dial on the center console, voice commands, and some steering wheel buttons. Also standard are Apple CarPlay and Android Auto compatibility, a 4G LTE-enabled wi-fi hotspot, a digital driver information center, and wireless phone charging.

Cadillac has finally built a proper European-style sport sedan. Powerful, attractive, fun-to-drive, and modestly priced, the 2020 Cadillac CT5-V is a compelling value in a world overrun with crossover SUVs.