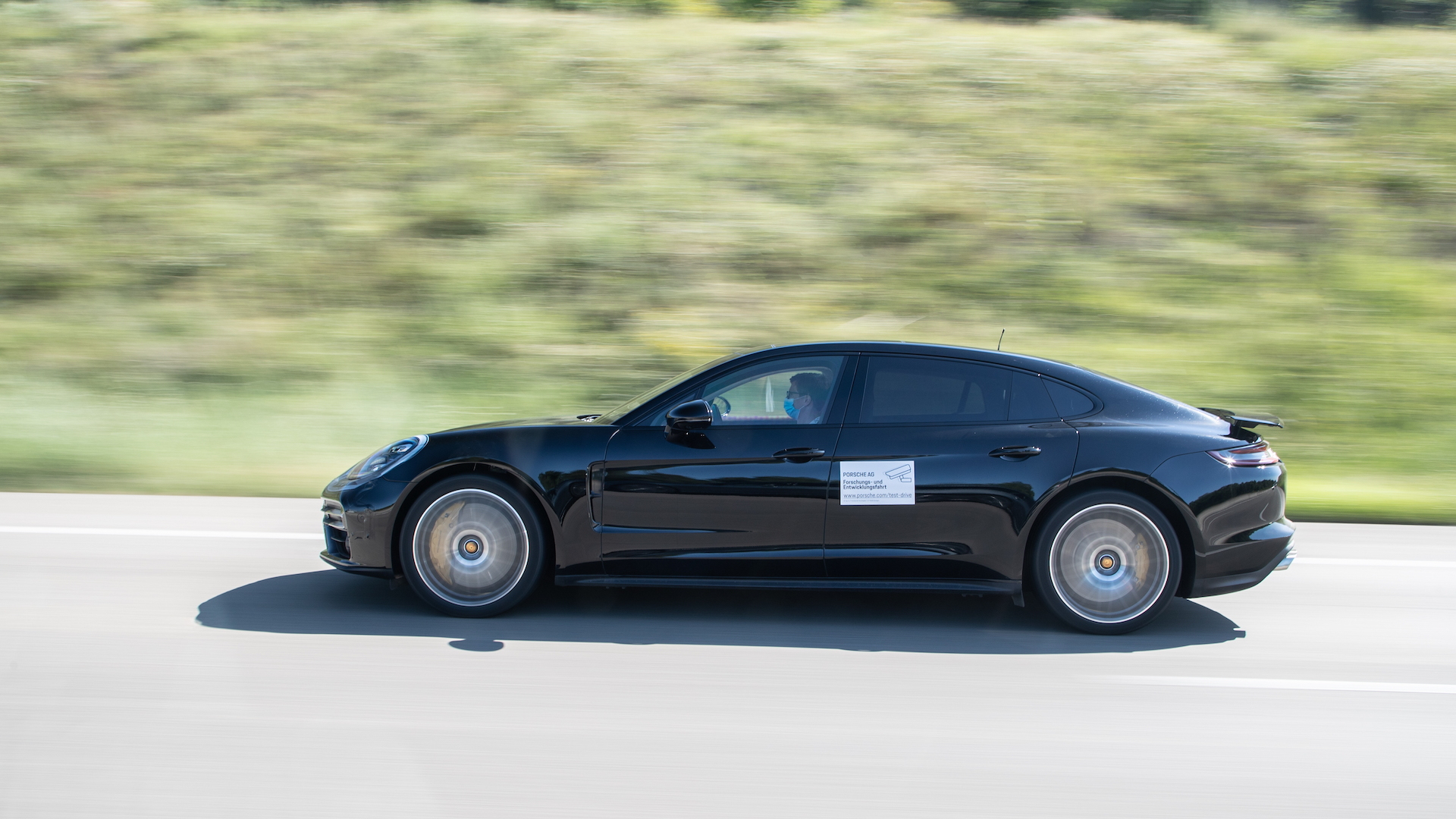 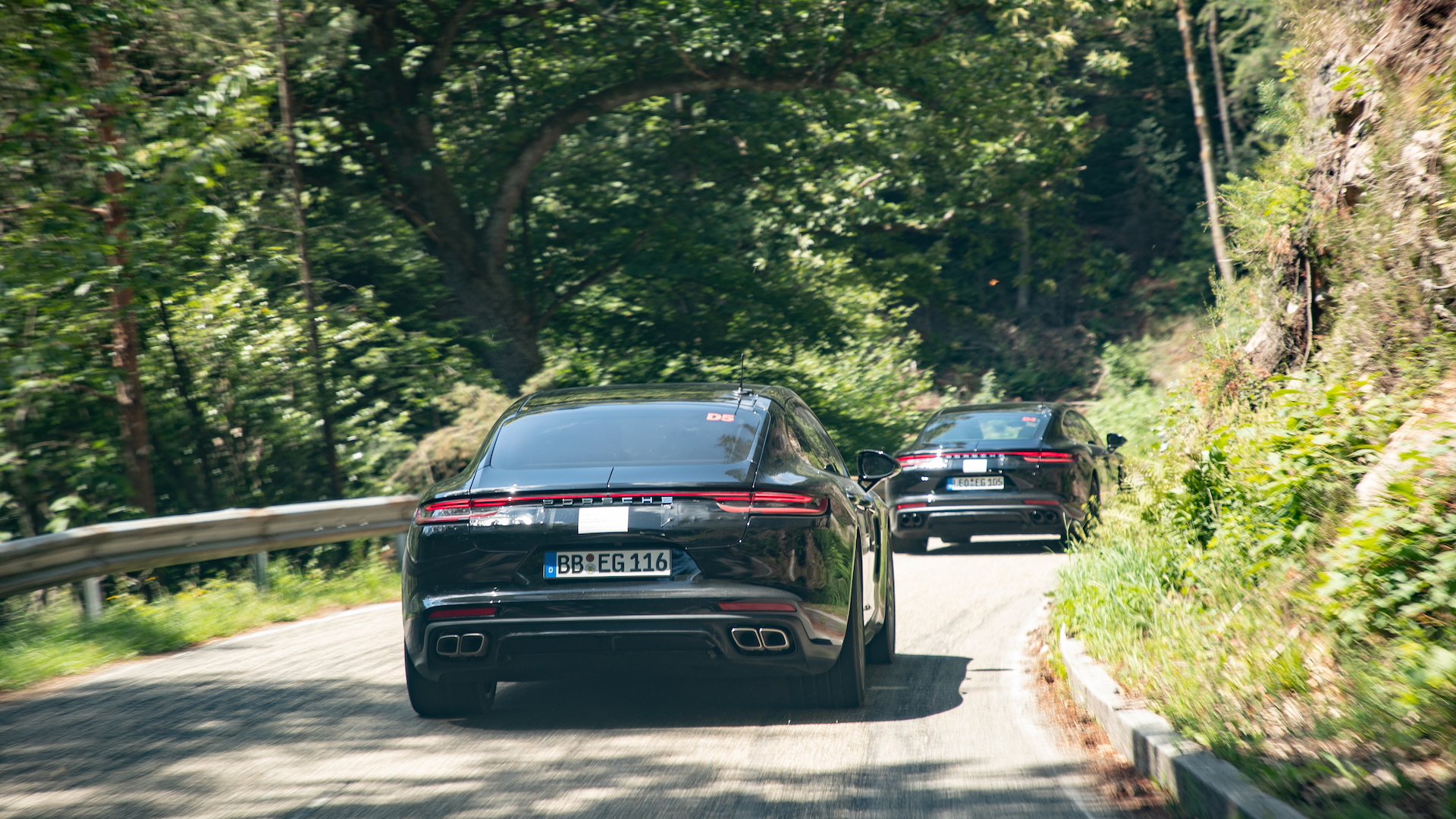 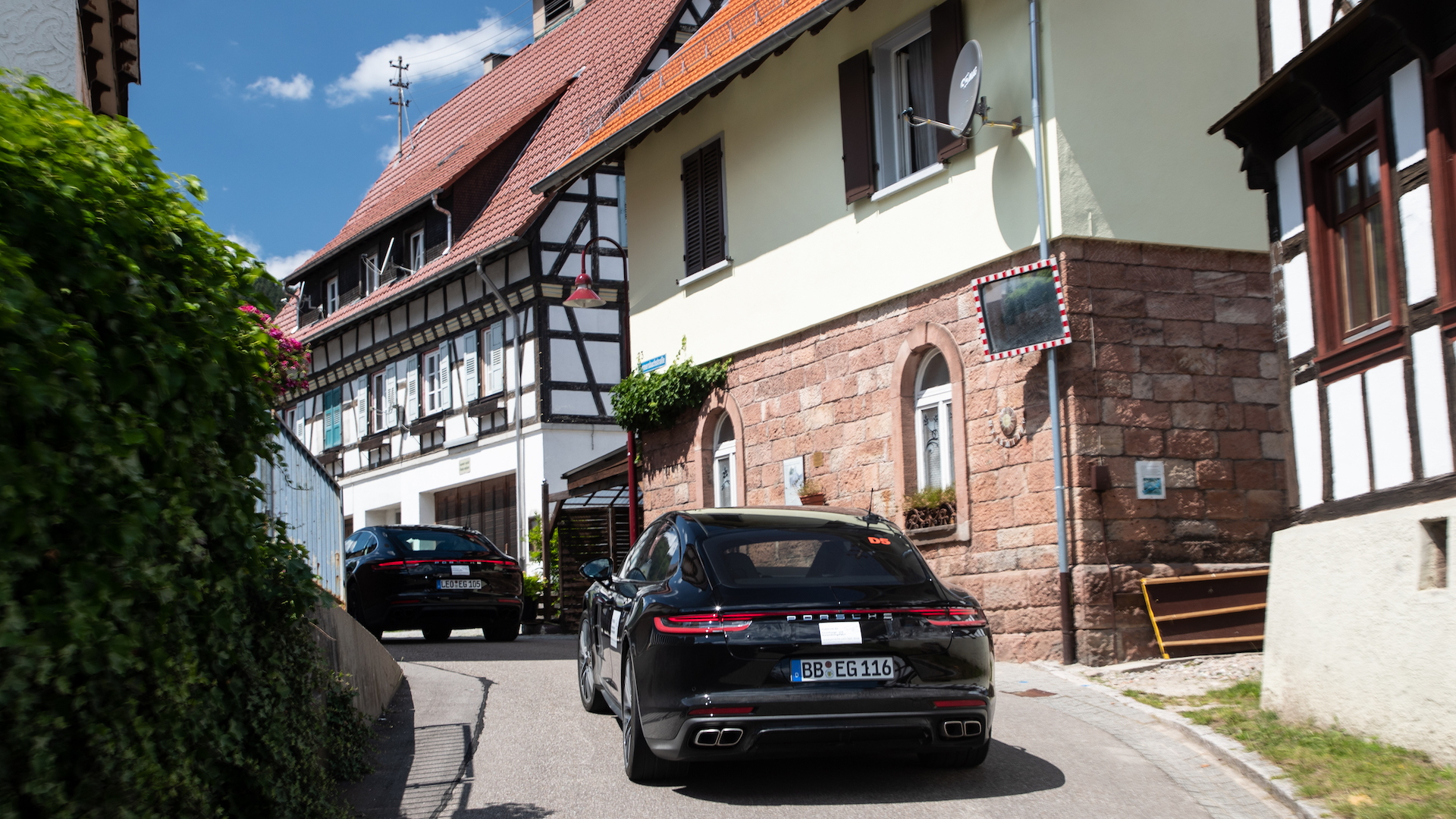 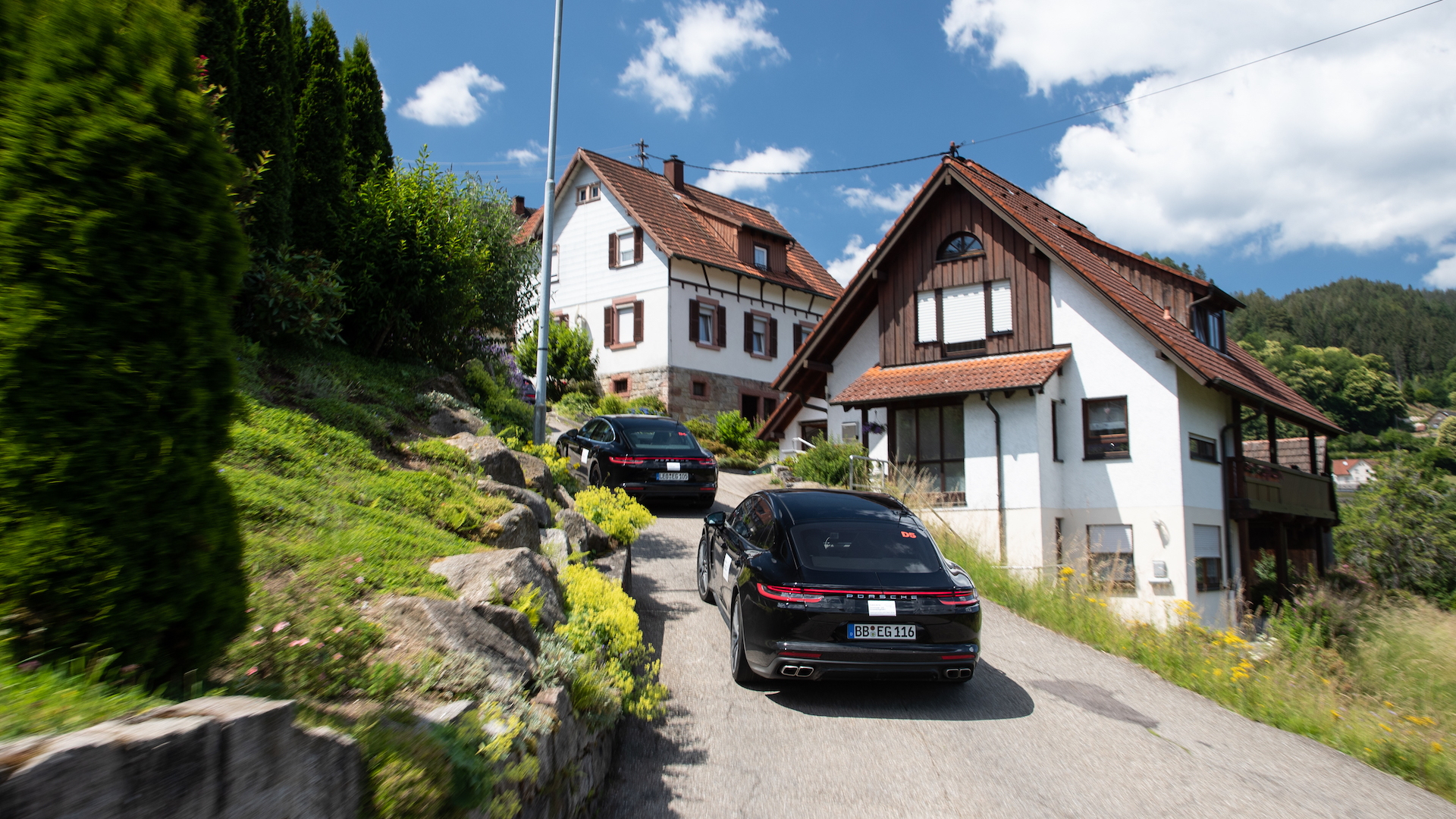 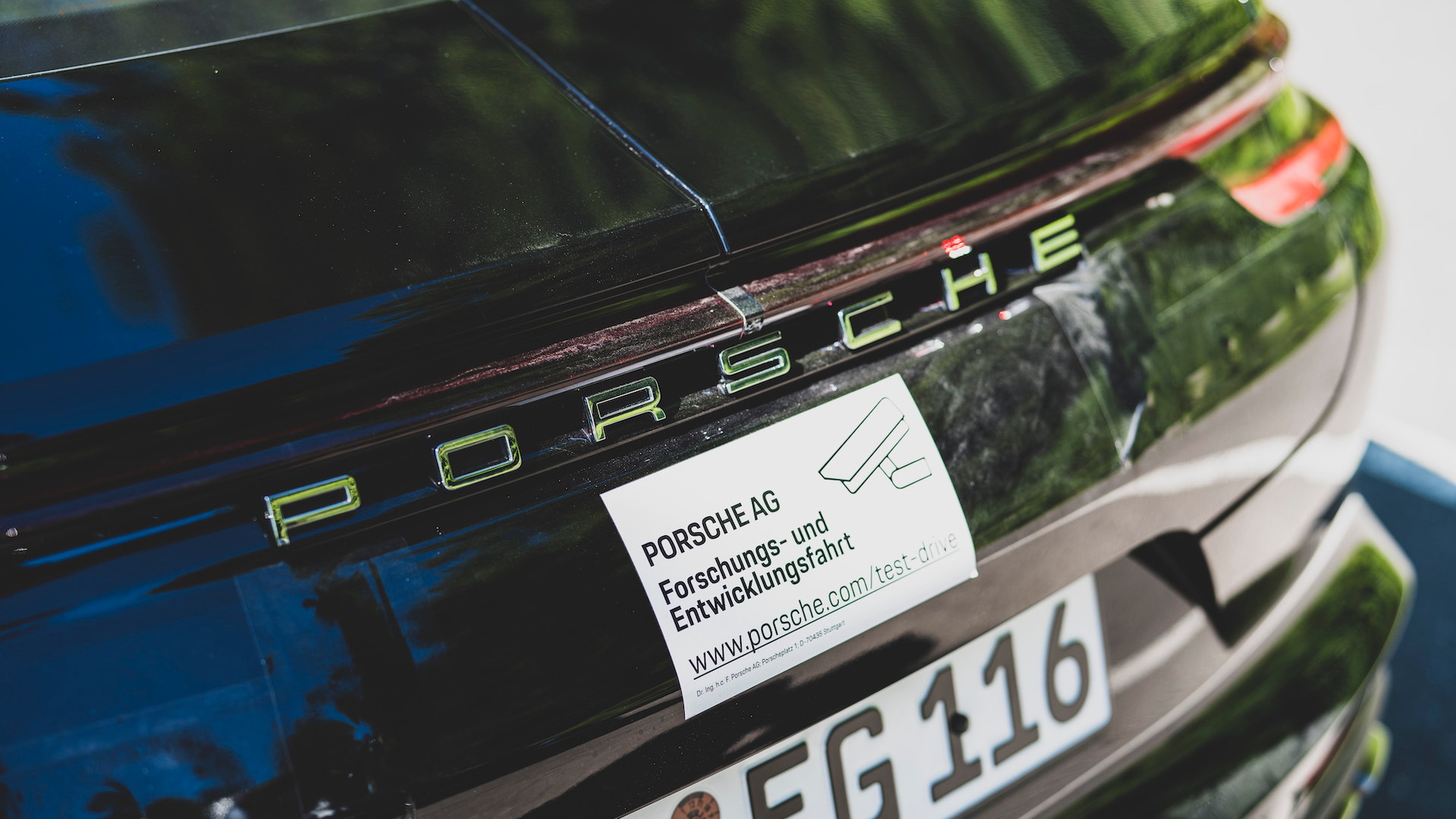 So many loud, high-horsepower machines parade in front of the security guards at Porsche’s headquarters in Zuffenhausen, Germany, that even a 911 Speedster begins to look a little dull. Arriving to drive 2021 Porsche Panamera prototypes, I pulled up in a two-seater that caught them completely off-guard: a 2007 Renault Kangoo panel van, registered in the French Alps and caked with several layers of my postcard-like region’s finest mud.

I thought they weren’t going to let me in.

Several phone calls later, the gate opened and I parked my farm-spec beater next to a pre-production Panamera prototype wearing light camouflage over its front and rear ends. It never fully revealed itself, but what matters is under the hood. Porsche is expanding the Panamera range with a mid-level 4S E-Hybrid model, and replacing the Turbo with a non-electrified Turbo S that will be sold alongside the Turbo S E-Hybrid. I drove from France in a farm implement to test both of them.

Filling the gap between the Panamera 4 E-Hybrid and the Panamera Turbo S E-Hybrid makes sense, especially given that more than half of the Panameras sold in Europe—where fuel is mind-numbingly expensive and emissions regulations are strict—are equipped with a plug-in hybrid powertrain. Hybrids are normally less expensive to register than non-electrified cars, too.

Porsche pegs the 4S E-Hybrid in the Goldilocks zone with a 552-horsepower plug-in hybrid system built around a twin-turbocharged 2.9-liter V-6. It works jointly with an electric motor fed by a 17.9-kwh lithium-ion battery pack that allows it to drive on electricity alone for short distances. A Porsche rep told me every gasoline-electric Panamera will receive this bigger battery pack in the coming months.

As for the new Panamera Turbo S, Arno Bögl, director of powertrain development for the Panamera line, summed it up simply: “We needed more power.” This concise, matter-of-fact statement also explains why Porsche swam against the current by upsizing the Boxster and Cayman GTS with a flat-6 engine earlier in 2020.

To create the Panamera Turbo S, Porsche dropped its familiar 4.0-liter V-8 between the Panamera’s swooping fenders and twin-turbocharged it to produce 621 hp and 605 pound-feet of torque. An 8-speed automatic transmission channels the V-8’s power to all four wheels. For context, the Turbo it replaces posts figures of 550 and 567, respectively. That’s a significant increase that makes the model worthy of wearing the coveted S badge. As of this writing, there are no plans to release another Turbo.

I had to ask: could this engine meander its way into the Cayenne? Of course, it’s technically possible, but Porsche representatives responded to my question with automotive omertà.

I traveled to Stuttgart in a Kangoo, not in an Airbus A320, because Germany was barely starting to reopen its economy after weeks of lock-downs, and Lufthansa had yet to resume service from France. Marcel Hönemann, Porsche’s manager of development drives, told our small group of socially distanced journalists that keeping the shiny side up was the main order of business. He also stressed masks were mandatory, and explained how members of his team would ensure we hopped into germ-free cars when it came time to switch from one powertrain to another. It was very different than every other launch I’ve attended in a decade of automotive journalism.

My first jaunt down the autobahn was unimpressive. Driving a 2021 Panamera Turbo S sedan, I blended in with sedate rush-hour traffic and frenzied, camper-pulling holiday-makers seeking sea, sun, and overpriced gelati somewhere south. Caught between semis, I took mental notes as Michael Schäfer, the director of the Panamera’s chassis development, described his team’s goal was widening the spread between comfort and sport. Crosstown rival Mercedes-Benz can sell customers who want maximum comfort an S-Class, and those who want something spicier an AMG GT 4-Door Coupe. Porsche doesn’t have this option, so the Panamera needs to be versatile, and Schäfer instructed his department to optimize all chassis systems, including the steering, roll stabilization, and suspension. Germany’s pavement is relatively smooth; America’s isn’t always. Schäfer assured me his team took expansion joints into account.

Congestion gradually thinned as I left Stuttgart in the rear-view mirror, and the traffic-sign recognition technology told me I was clear for a high-speed run. I turned off the adaptive cruise control, signaled to pass a humble Peugeot 207, and the V-8 rocketed the Turbo S well into triple-digit speeds after overcoming a hint of lag. Composure is an important trait for Porsche, and the Panamera doesn’t lack an ounce of it. It’s calm and it hardly breaks a sweat at triple-digit speeds. It makes 150 mph—wait, no, 160 mph—look easy as it gaslights the driver into thinking these speeds are normal and completely rational. Its steering is accurate, and it resists the urge to explore the world beyond the lane markings racing by at warp speed.

Speed is a hoot, but the car world’s obsession with the autobahn (which is often restricted, under construction, backed up, or all three) regrettably overlooks the fact that fantastic roads loop through the dense forests in the German countryside. Our four-car convoy continued on to stretches that looked like they’d make a gnarly hill climb route, and some that were actually used for racing back when the TT was a rear-engined NSU manufactured in nearby Neckarsulm.

Porsche’s new Panamera Turbo S wasn’t quite as confident in these conditions as the Panamera GTS, but it carried itself well. It’s sharper around a bend than the heavier Turbo S E-Hybrid and quicker out of it than the Turbo. With the drive mode selector turned to Sport+, the air suspension firms up and makes the Panamera feel like a different car, one whose only mission is to keep the driver engaged. Four-wheel steering ensures the rear wheels are always in sync with the mission of the fronts. Freed from the battery pack’s weight, this is what the Turbo S should have been all along.

Because my test car was a prototype, the interior was a jumble of production-bound bits and pieces with switches, wires, and other extras added over them. One part that’s certainly not headed to showrooms is the radio in the passenger-side footwell. It occasionally blurted out words and phrases in German, then switched to English and instructed the four cars to pull off to the right. It was time to change from to the Panamera 4S E-Hybrid.

I stepped out and looked at the convoy: Panamera, Panamera, Panamera, Panamera, and…Volkswagen Transporter? I suspected the last was a spy photographer, but the van carried the two men in charge of disinfecting every part of the cars we drove, including the exterior and interior door handles, the touchscreen, the gear selector, and the shift paddles. Smart, Porsche.

This process took about 15 minutes, giving attendees time to bounce questions off of the engineers accompanying us. I learned the 4S E-Hybrid Sport Turismo model I was about to drive was tuned with an eye on efficiency rather than on all-out performance. I also learned that Mario Grellmann, the director of electric and electronics, had to ensure the roughly 100 on-board ECUs get on with each other in all circumstances.

Although the Panamera 4S E-Hybrid isn’t as sharp as the Turbo S around a bend, it happily surprises anyone who has been force-fed a stew of misconceptions about hybrids and their positioning in the automotive pecking order. Its reflexes are quick, the electric motor sandwiched between the transmission and engine injects a jolt of instant torque into the driveline, but it made its most-powerful argument when our convoy reached a small, picturesque town surrounded by vineyards. The digital instrument cluster told me the rear-mounted battery pack was about 75% charged, so I shut off the V-6 with a quick flick of the steering wheel-mounted dial and turned the Panamera into an electric sedan that was as quiet as a Taycan as it crawled over the narrow, cobblestone-lined roads. It silently flew under the radar of tourists taking a break to enjoy a plate of spätzle and a high-noon hefeweizen.

Porsche explained it was too early to provide technical specifications, so I’m not sure how far the Panamera 4S E-Hybrid can drive on electricity alone when its battery is fully charged. Bögl later told me development work is on-going and engineers are still putting the final touches on both new powertrains. He said he’s expecting to unlock about 30% more range with the bigger battery. The current Panamera 4 E-Hybrid has 14 miles of electric range in the U.S., according to the EPA, so 30% more would be about 18 miles.

Masks on, even the cars

Although the entire convoy was masked, even the prototypes, it was clear the updated Panamera looks like, well…a Panamera.

Even with the camouflage, I can tell you with near certitude that stylists gave all 2021 models and body styles, careful updates instead of completely reinventing the look. Stylists tweaked the headlights and made some modifications to the front end, like redesigning the lower part of the bumper. One seemingly minor update was shockingly difficult. On the current Panamera, the light bar that runs between the taillights consists of two pieces separated by a thin vertical gap. The gap was the only way to ensure the bar would withstand an Arizonian summer, a Russian winter, and anything in between for years on end. It annoyed Porsche’s in-house perfectionists to no end, so engineers applied lessons learned from developing the Macan to give the updated Panamera a one-piece bar. Although most owners won’t notice the change, it shows Porsche’s commitment to getting it right.

A new-look diffuser is also integrated into the rear bumper. The standard assortment of new wheel designs and additional paint colors rounds out the visual updates. Inside, Porsche added a redesigned steering wheel, and a quicker infotainment system displayed on a higher-resolution screen. Wireless Apple CarPlay is available, though Android Auto is still missing.

Porsche concentrated on adding substance to the 2021 Panamera range, while avoiding the superfluous and the anodyne. For example, Schäfer scoffed at the idea of a drift mode, dismissing it as a useless party trick and pointing out it’s already possible to put a Panamera sideways by muting the electronic driving aids. The standard Panamera will carry on unchanged mechanically, but the Panamera GTS will benefit from a 480-hp V-8 (20 more horses than the current model) and software tweaks that make the power delivery feel more linear. Both the Panamera 4S E-Hybrid and Turbo S are scheduled to make their global debut later in 2020, and they will be available in all body styles: standard sedan, longer Executive sedan (yes, I know they're actually hatchbacks), and Sport Turismo wagon.

Since the original model arrived in 2009, the Panamera has impressed journalists and motorists by scoring high on comfort, performance, and technology, and the two new additions to the lineup are the next steps in its evolution. The multi-tasking Panamera 4S E-Hybrid benefits from the latest advances in battery technology and balances performance with efficiency, while the pavement-scorching Panamera Turbo S proves a flagship doesn’t always need to be electrified. There’s still room in this world for an unabashedly powerful V-8 engine.

By Ronan Glon for Motor Authority