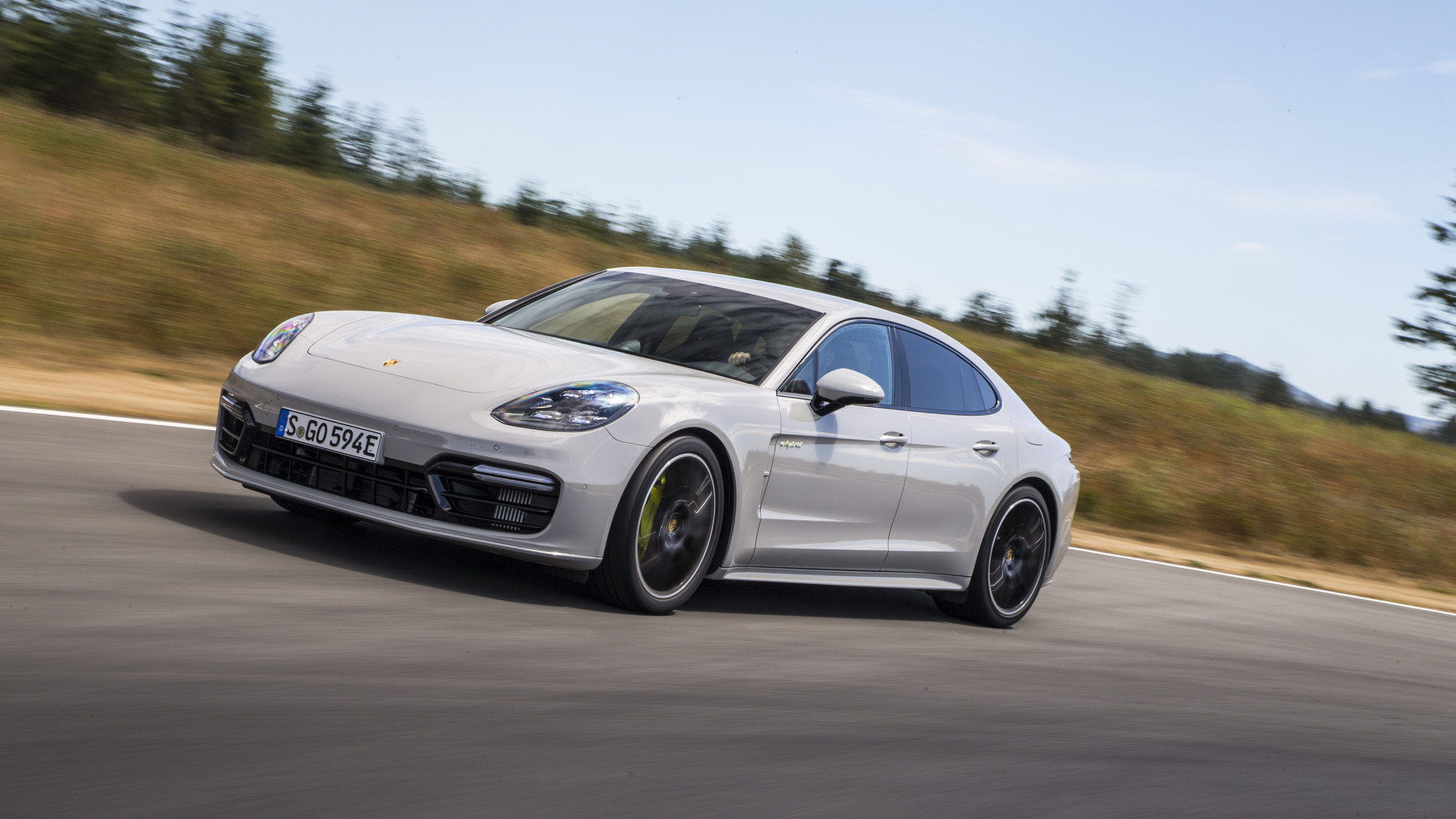 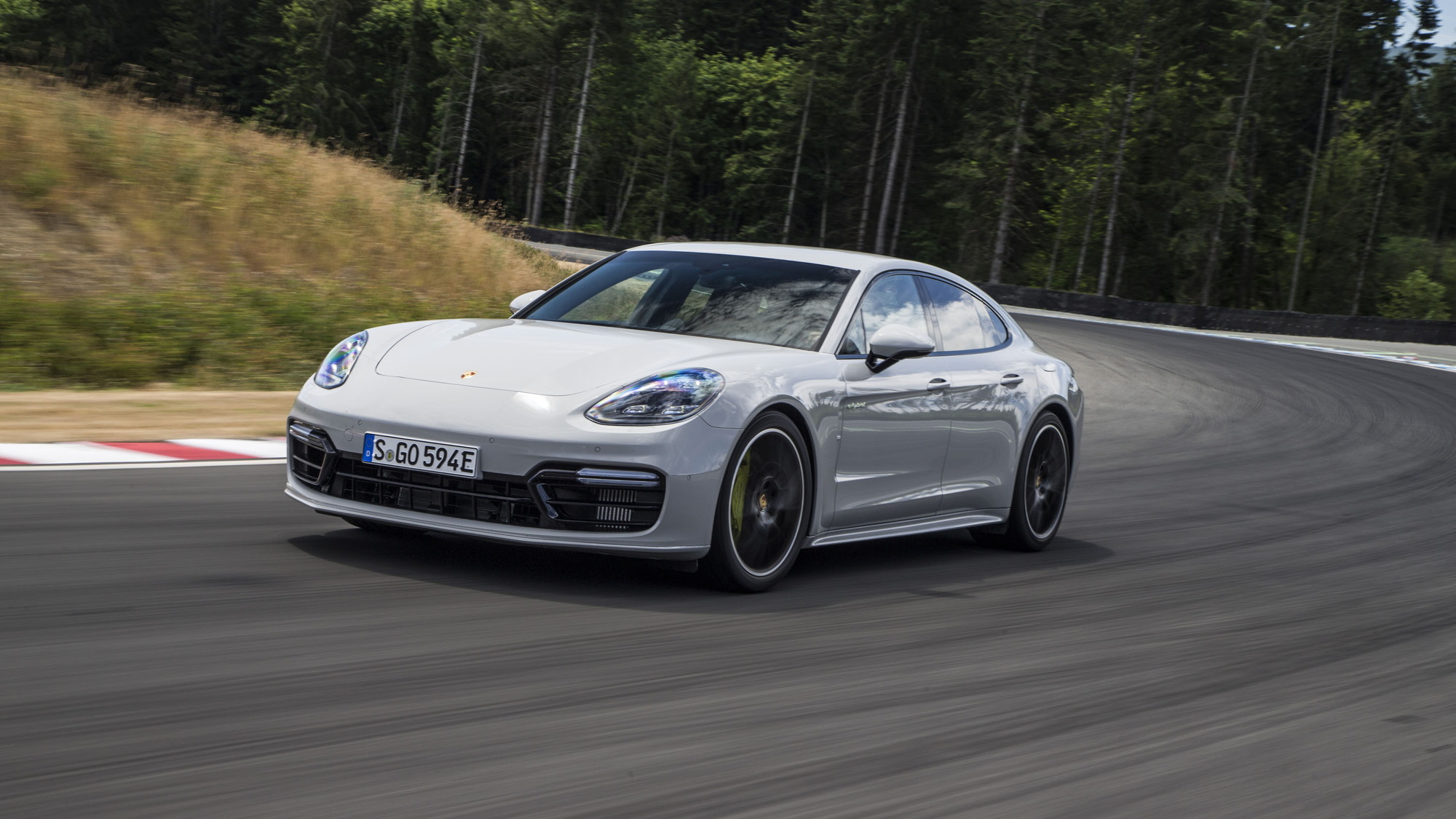 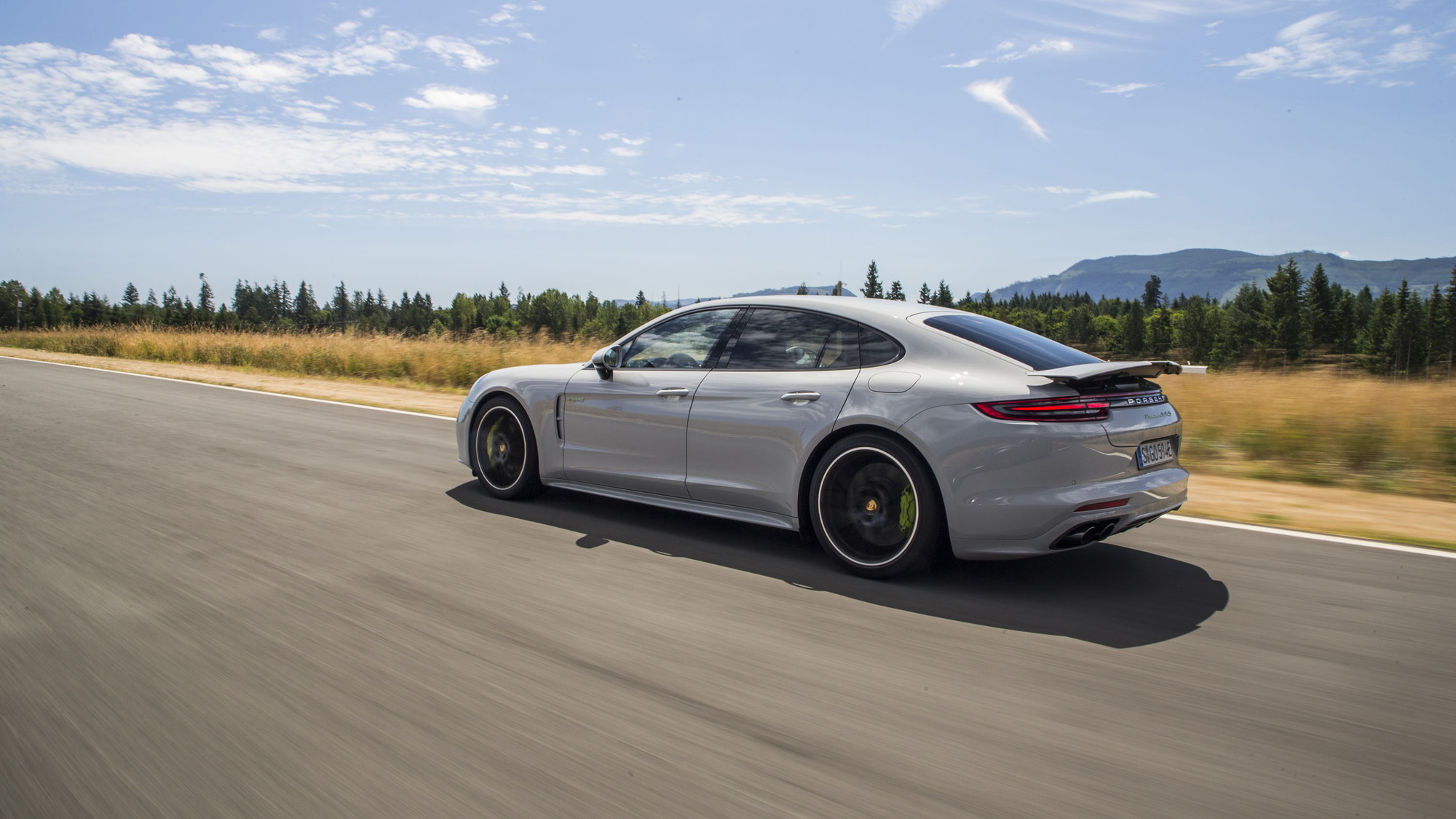 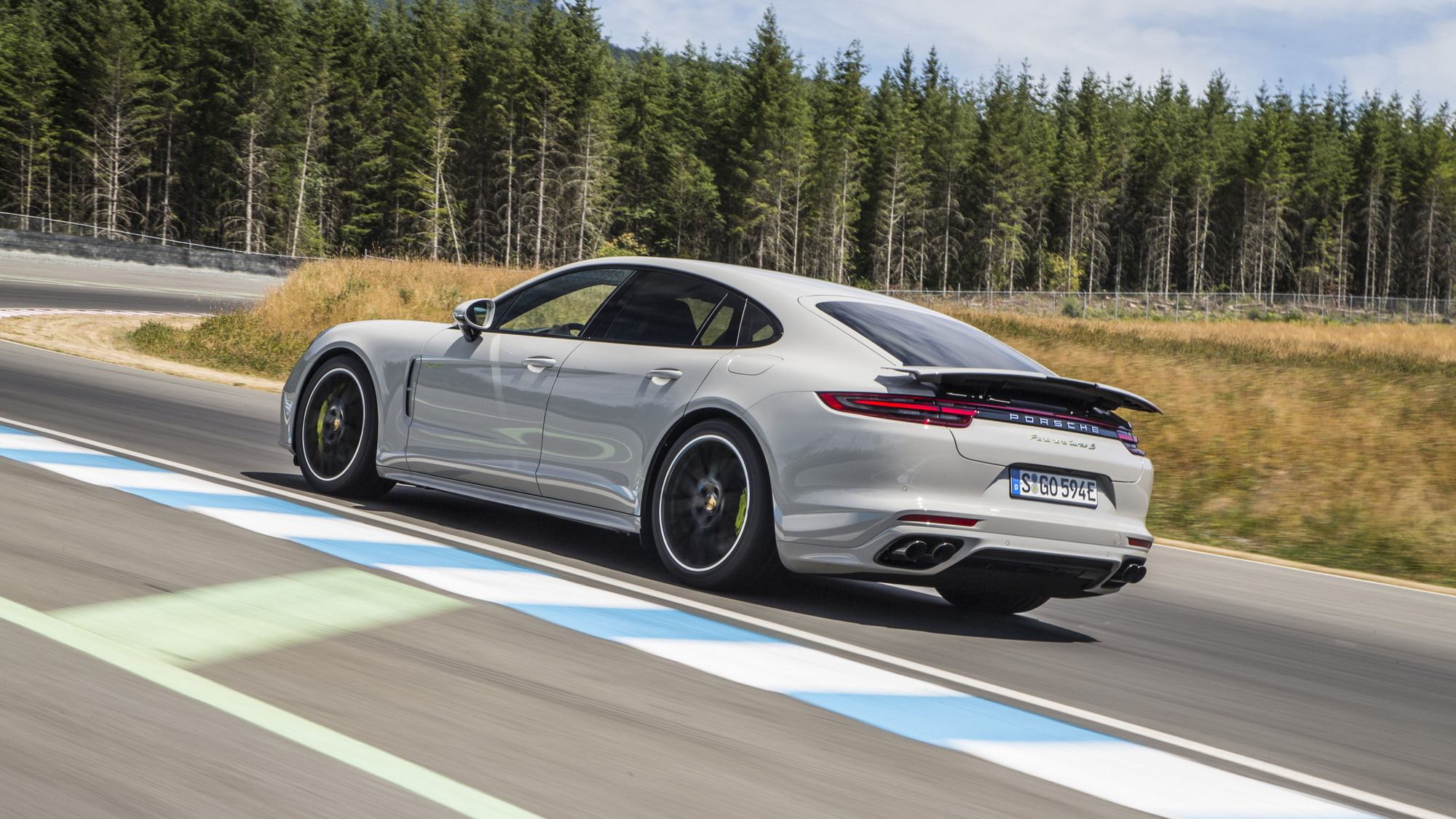 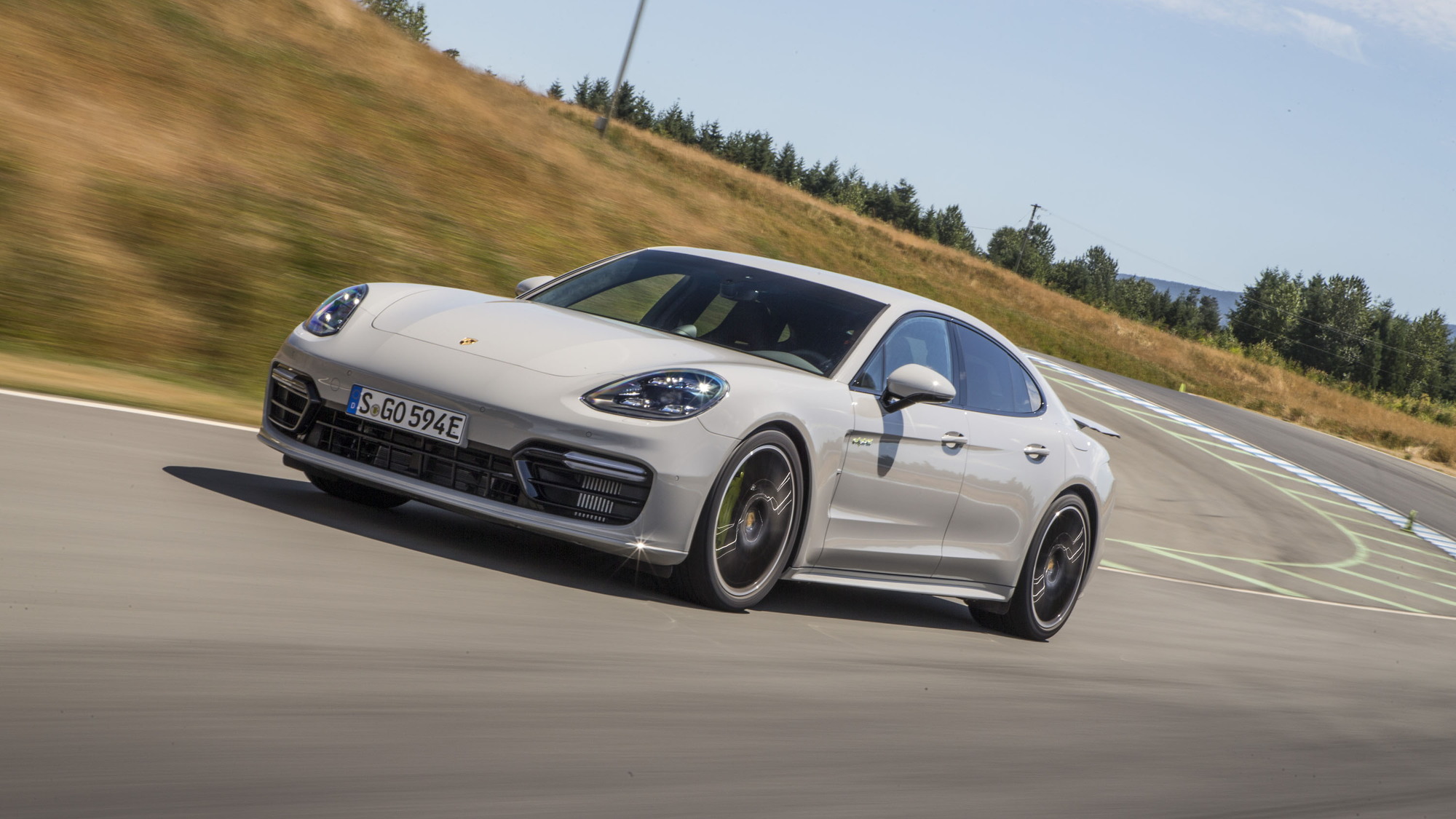 There’s nothing raw or visceral, two words nearly synonymous with Porsche, about this four-door hypercar, and yet it feels every bit the flagship it is intended to be. After on- and off-track drives around Victoria, British Columbia, it has forced us to rethink our notion of what makes a Porsche a Porsche.

With the Panamera Turbo S E-Hybrid, Porsche has distilled the 918 Spyder’s plug-in hybrid technology into a sedan/hatchback intended for the masses—the masses with upward of $200,000 to drop on a leather-lined four-seater, that it is. This flashiest of Panameras doesn’t render the 918 Spyder a relic, but its 680-horsepower, 626 pound-feet of torque powertrain hardly makes it a slouch.

Porsche quotes a believably fast 0-60 mph sprint of 3.2 seconds, but that’s only a portion of the story. Response from the skinny pedal is electric car-grade instantaneous, only with a lot more jolt. Here, a 4.0-liter twin-turbo V-8 cribbed from the standard Panamera Turbo pairs to a 14-kWh lithium-ion battery and an electric motor. An updated version of the automaker’s 8-speed PDK dual-clutch transmission optimized for hybrid use shuttles power to all four corners. In this case, “hybrid” doesn’t denote eco-friendliness, although the rich can get richer by stopping for gasless often. Official fuel economy figures aren’t out yet, but Porsche estimates about 31 miles of electric-only range.

To a certain extent, the Panamera Turbo S E-Hybrid drives just like its brethren—except that it’s intergalactically fast. Even in Normal mode, it rockets forward when the throttle pedal is mashed, its 8-speed gearbox firing off imperceptibly fast shifts. The Panamera’s standard 16.5-inch ceramic composite brakes bring things to a halt in similarly neck-snapping fashion, although there’s a bit of a dead zone before they grab hold. That’s something we’ll chalk up to the regenerative braking system that helps feed the battery.

On a tight circuit near Victoria, we put the Panamera Turbo S E-Hybrid in Sport+ mode and hustled our way behind a 911 Turbo S driven by a pro. The big four-door’s ability to hustle belies its 700 pounds of extra battery and feature girth. There’s a hint of on-center deadness to its meaty, three-spoke steering wheel, but otherwise this four-door admirably mimics a much smaller car. Yet it transitions well and there's more feedback from this tiller than anything the Panamera competes against, not that it really has a direct rival. Tesla's Model S and BMW's 7-Series seem the most logical, but neither is quite on par with the Porsche.

Back on the highway and allowed to stretch its legs, the Panamera Turbo S E-Hybrid relaxes. Left in default mode, it pulls power from the battery at all times to supplement the V-8. A Hybrid Auto mode prioritizes the battery for electric-only driving at lower speeds and under light engine loads.

Ignore the instrument cluster and there’s little evidence that there’s much going on under the Turbo S E-Hybrid’s hood. Its V-8 is as suppressed as road and wind noise. The Panamera’s three-mode sport suspension is commendably soft while still thoroughly buttoned down in its standard configuration. Triple digit speeds are a mere press of the throttle away.

Tap a tiny button located in the drivetrain mode selector dial and it’s obvious that this version of the Panamera was designed to please those who grew up in the video game era. Porsche bills the innocuous switch as its “Sport Response” button, but it’s more akin to a boost function, albeit an electric one. It saves up battery power and provides 20 seconds of thunderous overtaking grunt.

Porsche offers the Panamera Turbo S E-Hybrid in two configurations, standard and Executive. The Executive’s 10-inch-longer wheelbase affords it more rear seat room, and it comes standard with the automaker’s desirable rear-wheel steering setup. It's as much an aid to corner carving as it is to straight-line stability.

It’s hard to rationalize any Panamera, really, but at about $185,000 to start, the Turbo S E-Hybrid is undisputedly the king of the lineup. It’s nearly $40,000 more than the standard Turbo, but from an automaker that charges tens of thousands to wrap just about everything inside in leather, price is rarely a factor. You could add another Porsche or two to your fleet if you stuck only with the Panamera 4 E-Hybrid; it’s down 215 hp and lacks the insane urgency of the Turbo S E-Hybrid, but it’s hardly a slouch.

Do you really need this kind of performance from a sedan that tips the scales at 5,100 pounds even before a walkthrough of the lengthy optional equipment list? Of course not, but that’s not the point here.

What the Panamera Turbo S E-Hybrid really does illustrate is the rapid evolution of the Porsche brand. Today, about 40 years after the first 911 Turbo, almost every Porsche is turbocharged (with or without the Turbo name). Odds are it’ll take a lot less than 40 years for Stuttgart’s high-performance brand to electrify its entire lineup.