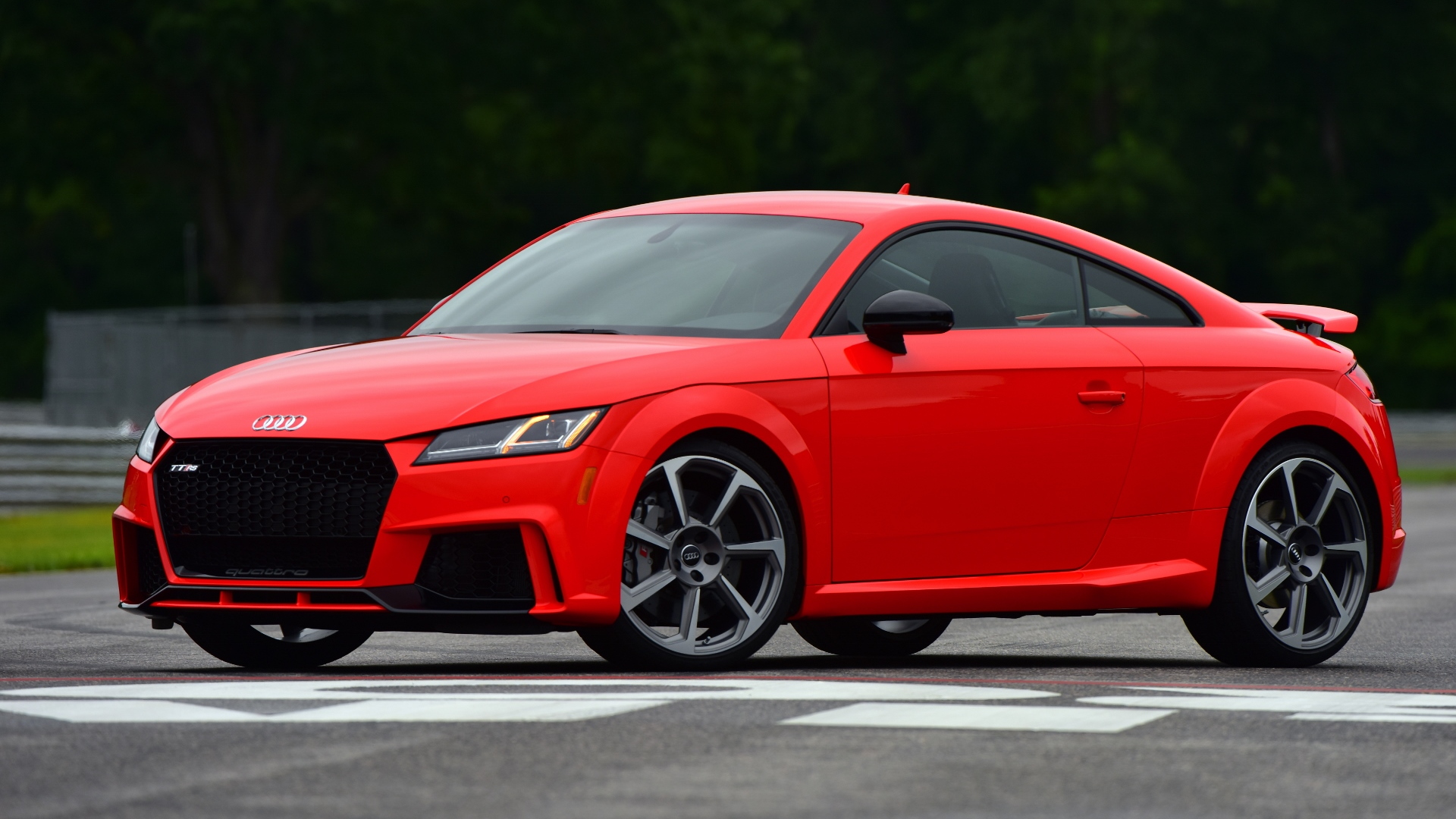 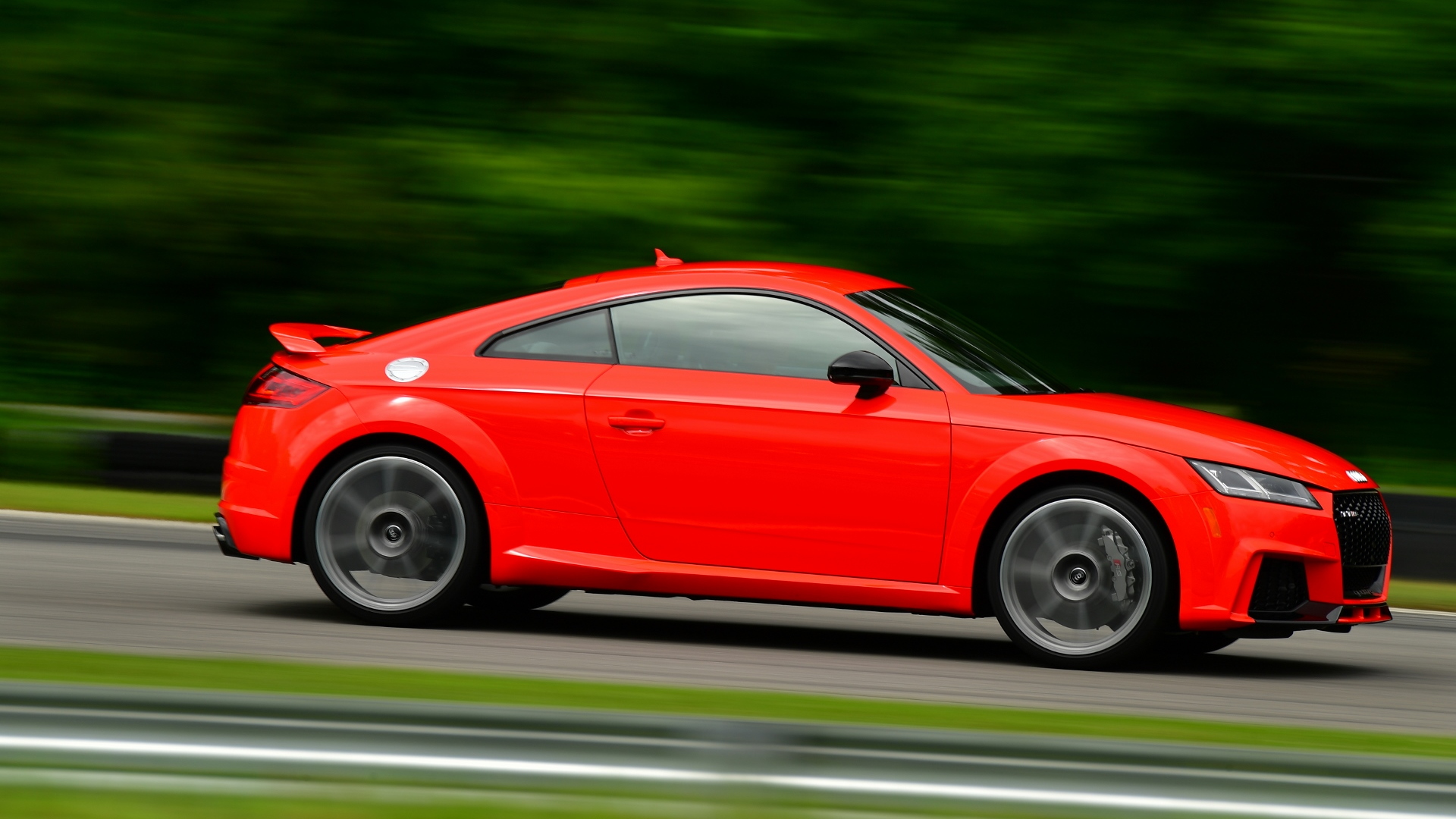 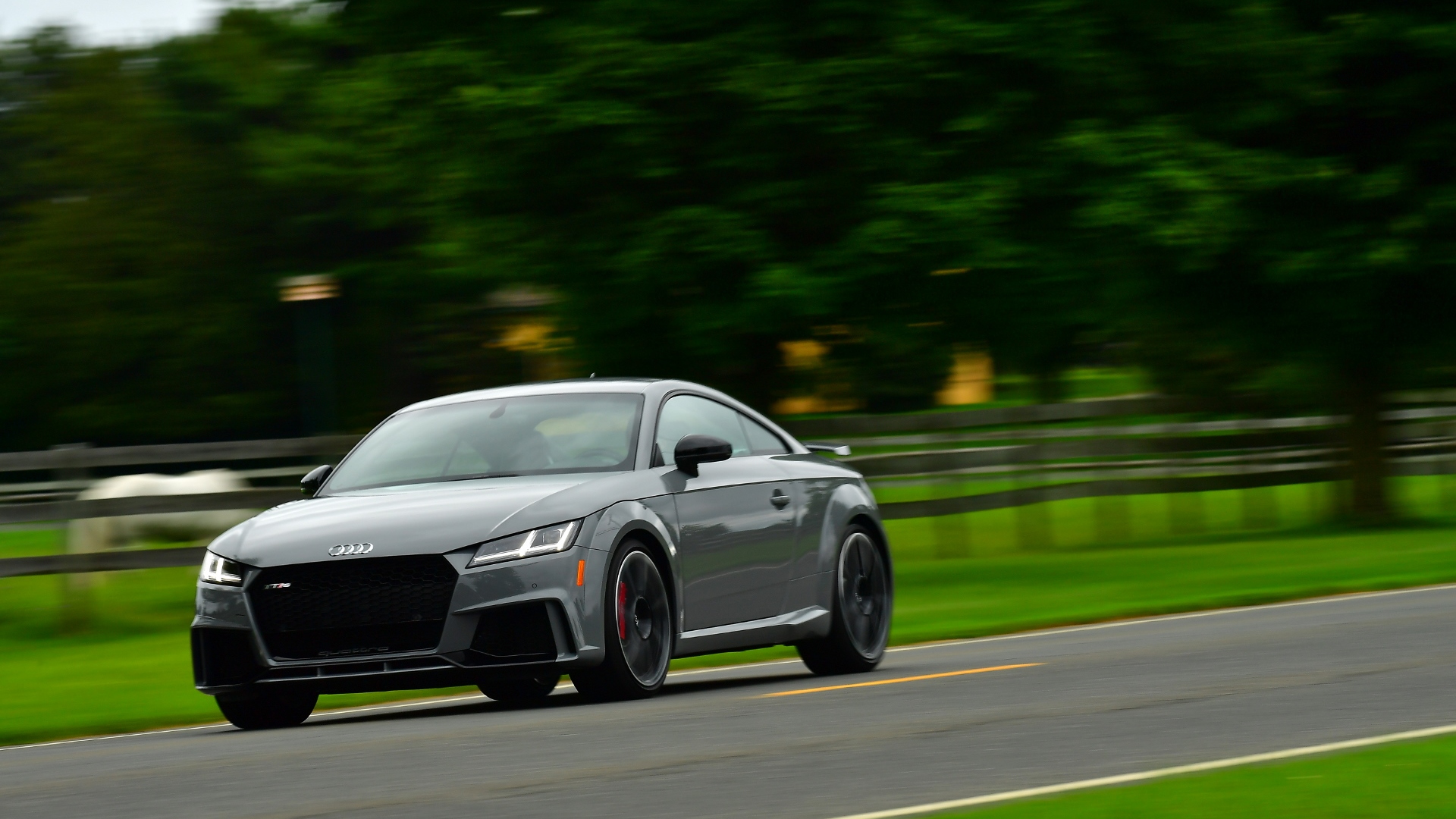 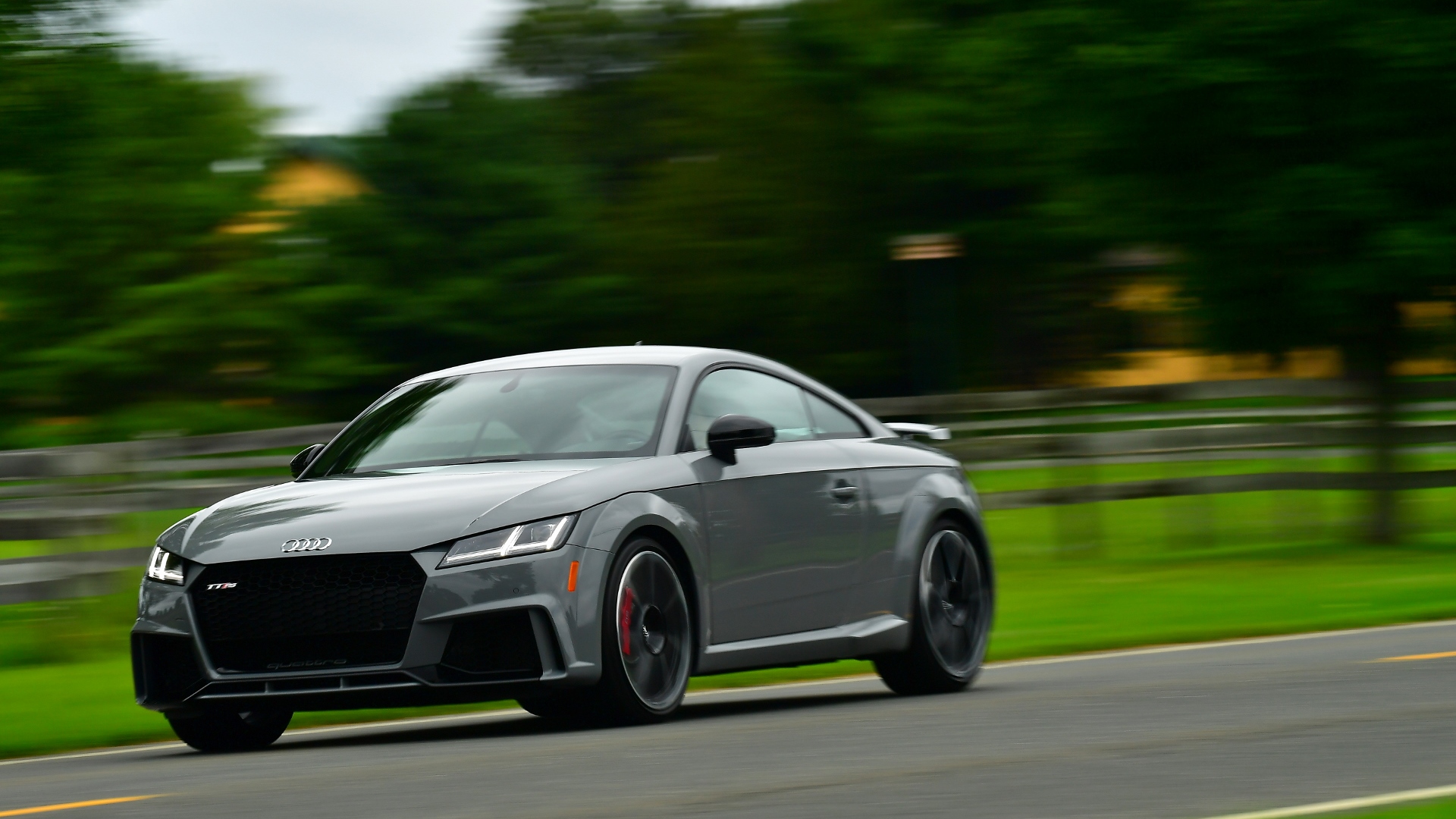 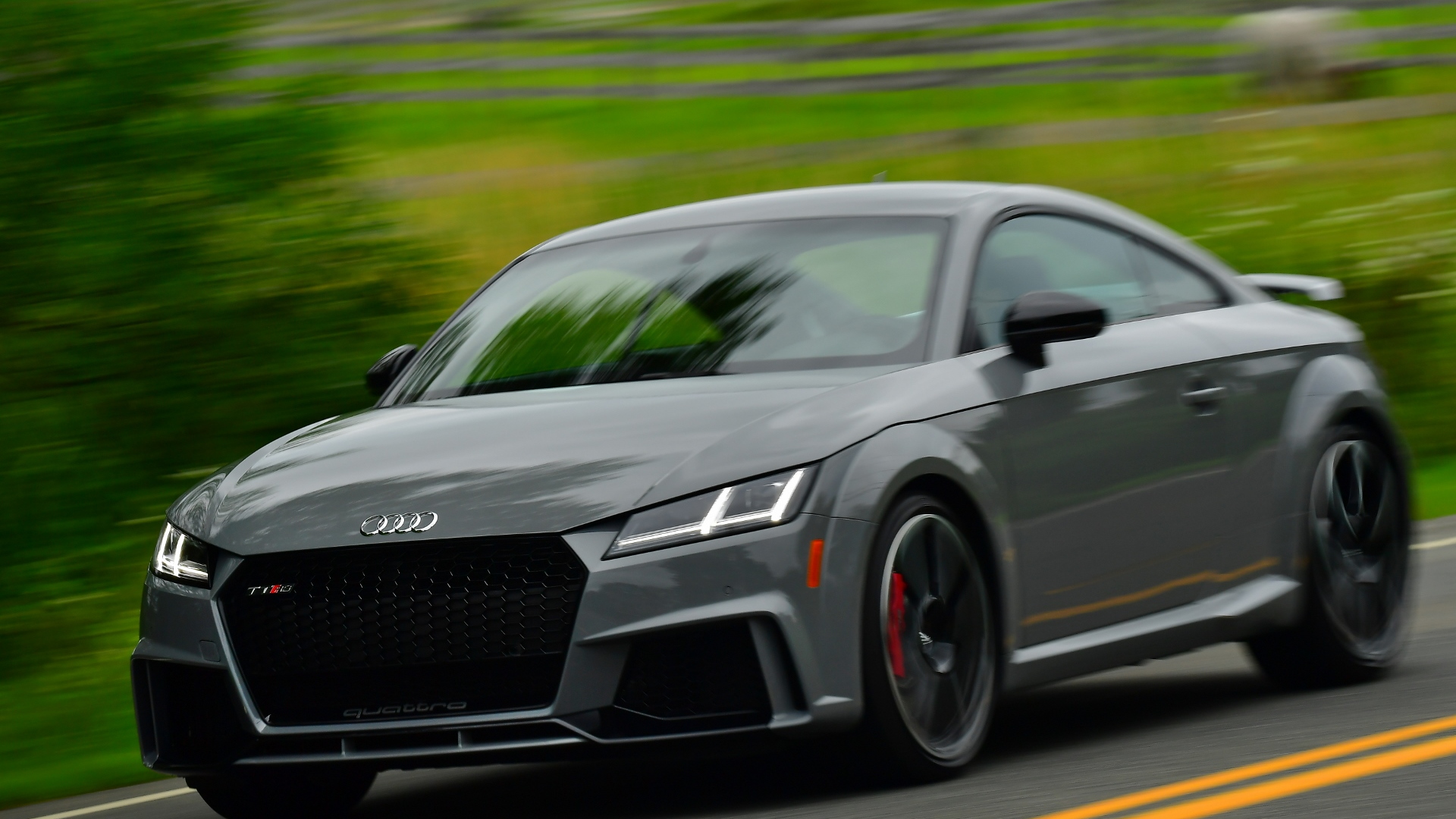 If you were going to design a sports car, you wouldn’t start with the layout of the Audi TT. You wouldn’t choose a front-wheel-drive architecture. You wouldn’t turn the engine sideways, and you damn sure wouldn’t locate it ahead of the front axle.

Instead, you’d start with a rear-wheel drive platform, mount the engine longitudinally, and keep it behind the front axle. Heck, you might even use a mid-engine layout.

You’d do all this with the aim of creating a perfect 50/50 weight balance front to rear. You’d be alright with a 40/60 rear weight bias in a mid-engine car, but you would cringe at the idea of the 59/41 front bias you get with the 2018 Audi TT RS.

And yet it works.

The TT RS is the sportiest and most powerful version of the TT sports car. While Audi is building both coupe and convertible versions, we only get the coupe.

We’ve driven the base TT and and the more powerful TTS and found them to be fun, but flawed. The TT RS adds a heaping helping of performance equipment to make it both fast in a straight line and capable on a racetrack.

It all starts under the hood where the engine sits in the wrong place facing the wrong direction. That engine is a turbocharged 5-cylinder, an Audi oddity that dates back to the 1970s. The previous version, which was last offered for the 2013 model year, maxed out at 360 horsepower. This almost entirely new version huffs out 400 hp and 354 pound-feet of torque; the latter is available from 1,700 to 5,850 rpm. At 160 horsepower per liter, the specific output of the TT RS is bested by only a handful of cars, most of them supercars.

Audi threw quite a bit of technology at the engine to make it lighter and more powerful. The block changes from iron to aluminum and sheds 40 pounds in the process. A new crankshaft with lightening holes shaves 3.1 pounds and spins with less friction loss, while a new magnesium oil sump cover cuts another 4.4 pounds. All told, the engine is 57 pounds lighter, helping to improve that weight balance from a little over 60 percent front/40 percent rear to 59/41. It’s small, but it helps.

Internally, the engine adds port injection to the existing direct injection to improve low-speed emissions and add a bit of power during hard acceleration. Turbo boost improves from 18.4 psi to 19.6 psi. Audi also adds variable valve lift on the exhaust side with two profiles, one to improve fuel economy at low speeds and the other to improve throttle response during hard acceleration. All this work helps improve horsepower by 17 percent.

The engine is mated to just one transmission, Audi’s 7-speed dual-clutch S Tronic. It has one more gear than the version in the TT and TTS and can be shifted manually via steering wheel paddles.

The TT is based on the MQB platform that Audi shares with Volkswagen. It’s a modular platform that can be adjusted for various types of vehicles, anywhere from a compact hatchback like the VW Golf to a crossover like the next VW Tiguan to a sports car like the TT. It’s a great platform for the Golf, but it is inherently flawed for the TT because it’s the source of the forward-mounted, transverse engine layout. The platform also isn’t strengthened for use in the TT RS, but the suspension is unique.

The base suspension is actually quite premium. U.S. buyers get the adjustable magnetorheological shocks that are optional in Europe. The springs are stiffer than those in the lesser models, and the car is lowered 0.4 inch. The steering features a variable ratio with a standard 15.8:1 ratio that ramps up to a quicker 13:1 the farther the steering wheel is turned.

The standard tires are 245/35R19s on cast aluminum wheels and buyers can choose 255/30R20 tires on forged alloy wheels. The brakes feature 14.6-inch ventilated front discs with 8-piston calipers. The rear brakes are 12.2 inches in diameter.

Track-focused buyers should opt for the Dynamic Plus package. Instead of the magnetic ride suspension, it features fixed shocks, as well as carbon ceramic front brake discs, a carbon fiber engine cover, and a top speed that increases from 155 to 174 mph.

Like all TTs, the TT RS comes standard with Audi’s Quattro all-wheel-drive system. This version is unique, however, and it distributes power front to rear based on the mode you choose in the Drive Select system. Opt for the Comfort mode, and 80 percent of the power goes to the front. Choose Auto, and a little more goes the rear. Pick Sport and it aims for a 50/50 split, though perhaps 80 percent can go to the rear during performance driving. In extreme conditions, such as when the front wheels are on ice and the rears have traction, all of the power can go to the back.

Playing in Spain, and again at Lime Rock

To show off the capabilities of the TT RS, Audi invited Motor Authority to Spain to drive it on the former Formula One ractrack Circuito del Jarama, and on the twisty mountain roads around Madrid last September. We got to drive the car again in July at Lime Rock Park in Connecticut.

The first thing you notice when you slide into the diamond-quilted sports seats and press the steering wheel-mounted start button is the wail of the 5-cylinder. It’s a constant companion that burbles at low rpms but becomes a thrashy, rumbly, box of marbles when you step on it. Audi even offers a sport exhaust mode that opens flaps in the exhaust to make the engine note more pronounced.

The Dynamic mode really wakes up the engine and transmission, holding lower gears and increasing throttle sensitivity. That’s good because it helps mitigate the noticeable turbo lag you feel from a stop in Comfort mode. The problem isn’t so bad on the freeway because the turbo is already spooled up.

The Dynamic mode also enables a launch control function. To launch the car, choose Dynamic, hit the stability control button to activate its Sport function, put your left foot on the brake, mash the throttle, wait for the engine to engine to rev to 3.500 rpm, and let off the brake. “It provides a mighty shove right from the get-go,” says TT head of technical development Stephan Reil. It truly does. The TT RS launches almost violently, starting with a jerk and vaulting the car from 0 to 60 mph in 3.6 seconds. That’s practically supercar territory.

The cars we drove were outfitted with the optional 20-inch wheels, though Audi made both the magnetic ride and sport suspensions available. For those who will never take their TT RS to the racetrack, the magnetic ride suspension is clearly the way to go. In the Comfort mode, it is firm but not harsh, and it does a good job of quelling up-and-down motions over ruts and heaves. With the 19-inch wheels, we could see driving this car on an everyday basis. Those bounding motions become and issue in the Sport mode, especially with the 20-inch tires, and they are a cost of doing business with the Dynamic Plus package’s fixed dampers.

On the road, the TT RS fights against the limits of its design to deliver a fun driving experience. The steering is fairly quick and very direct, though it could use a bit more feel. The car turns in quickly, tracks nicely through corners, and maintains plenty of grip. Of course, you can only go so hard on the street, so Audi made Dynamic Plus package cars available for track duty to test the car’s at-the-limit handling.

On the track, the TT RS is surprisingly controllable. Charge into a corner, and it wants to understeer a bit upon turn-in. Keep adding throttle and it will just wash out. However, you can get it to point in the direction you want by lifting off the throttle. This induces some lift-off oversteer that rotates the car. Wait until the attitude is correct, then get back on the throttle and let the all-wheel-system put down the power to drive out of the turn. Pitching the car around corners in this manner was a genuine thrill both on both del Jarama and Lime Rock and the car's moves proved to be predictable and manageable.

It should be noted that the cars made available for track duty had very sticky Pirelli Corsa tires that are great for performance driving but will probably last 10,000 miles or less. These tires are only offered as an accessory through Audi dealers.

Super sticky tires or no, the 2018 Audi TT RS is a fast, raspy, agile machine that is fun to drive on twisty mountain roads or all out on a racetrack. Opt for the base suspension and the 19-inch wheels and it may give up a bit of track capability, but it is still quick while offering more everyday comfort.

The layout may not be ideal, but the TT RS car overcomes its inherent imbalance to become a genuinely fun sports car that doesn't have to apologize for its design.

These driving impressions are from an invitation-only automaker launch event that allowed special access to the vehicle, the racetrack, and executives. Audi covered our overnight accommodations, meals, and transportation costs.