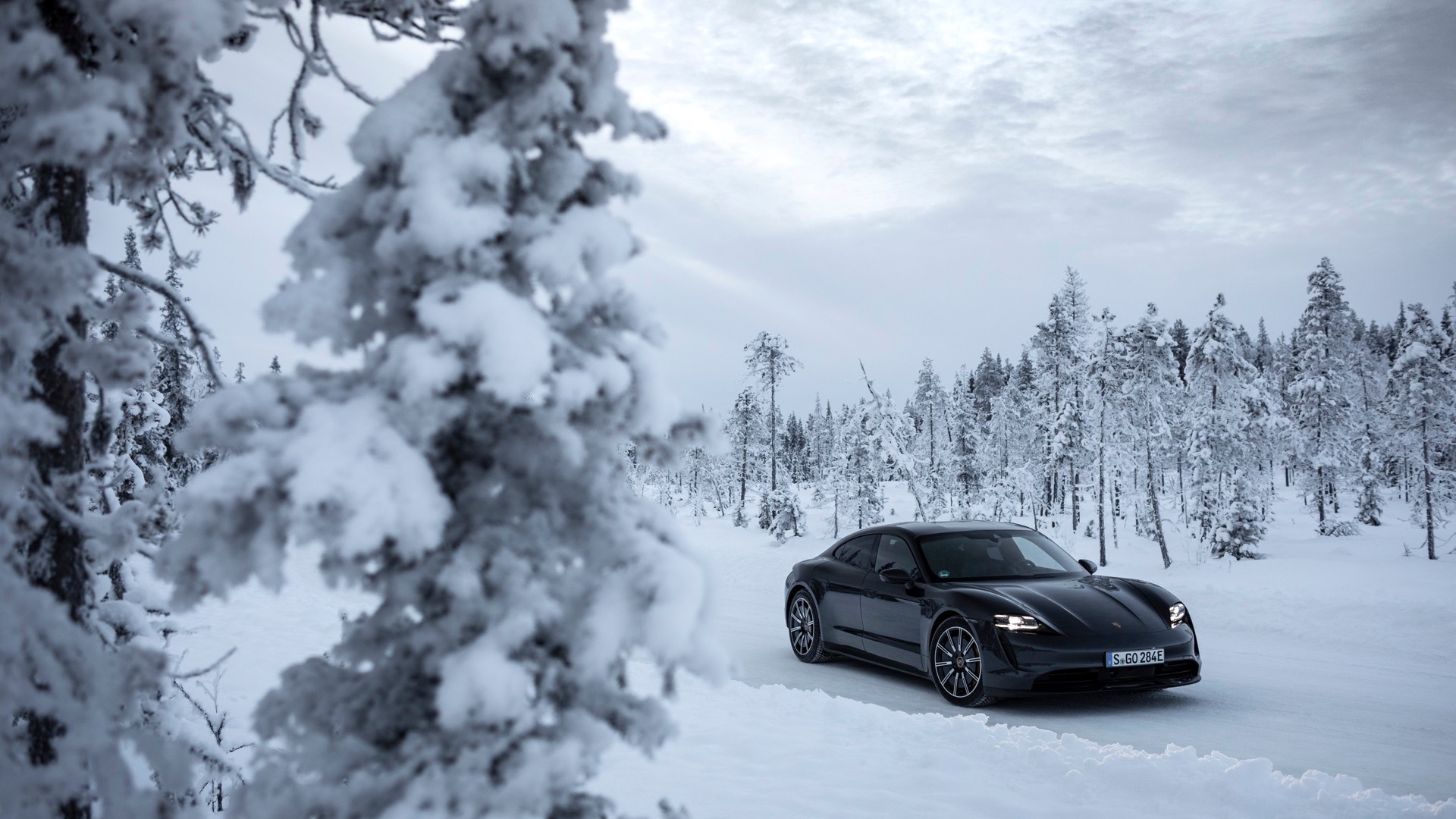 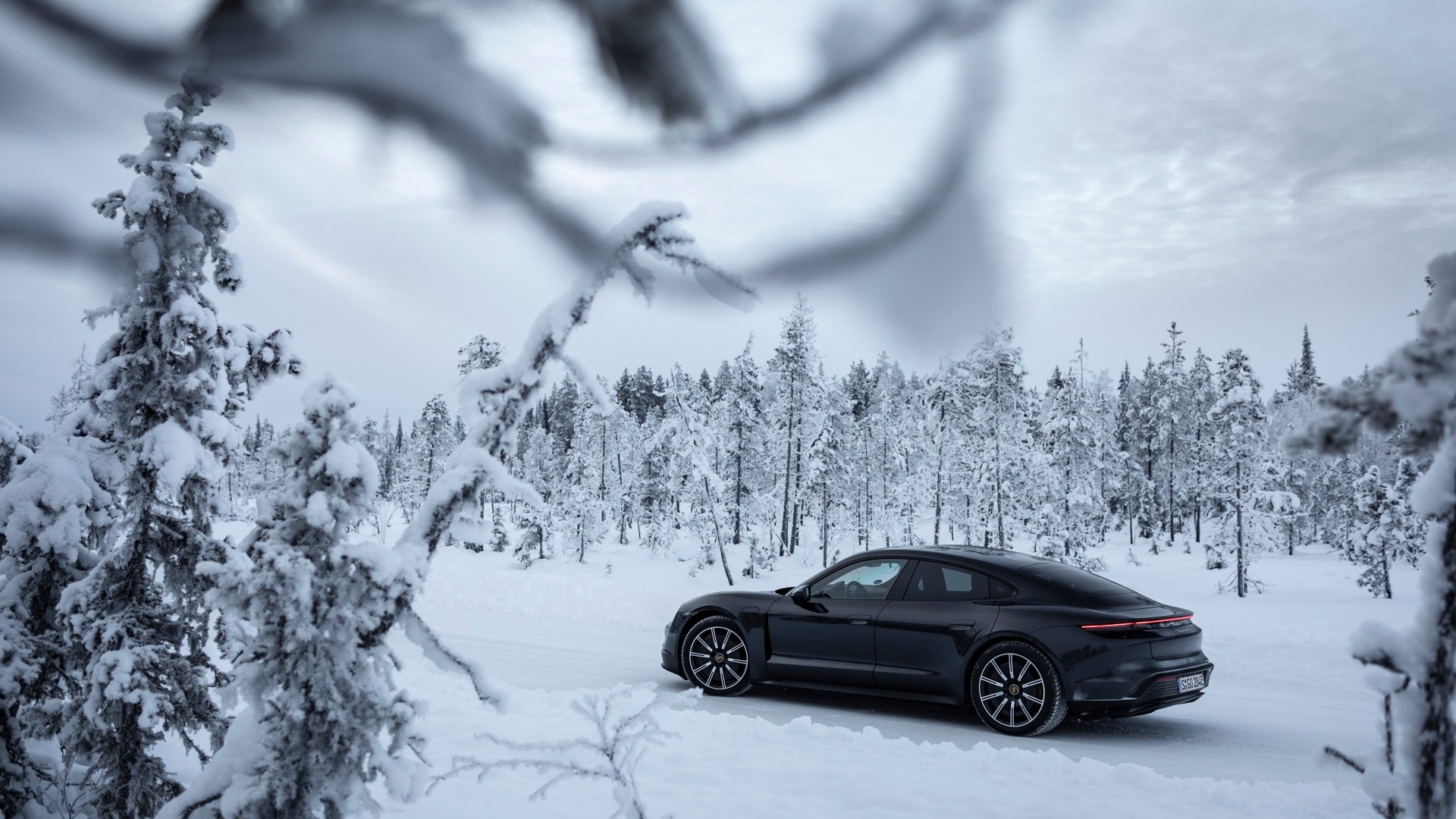 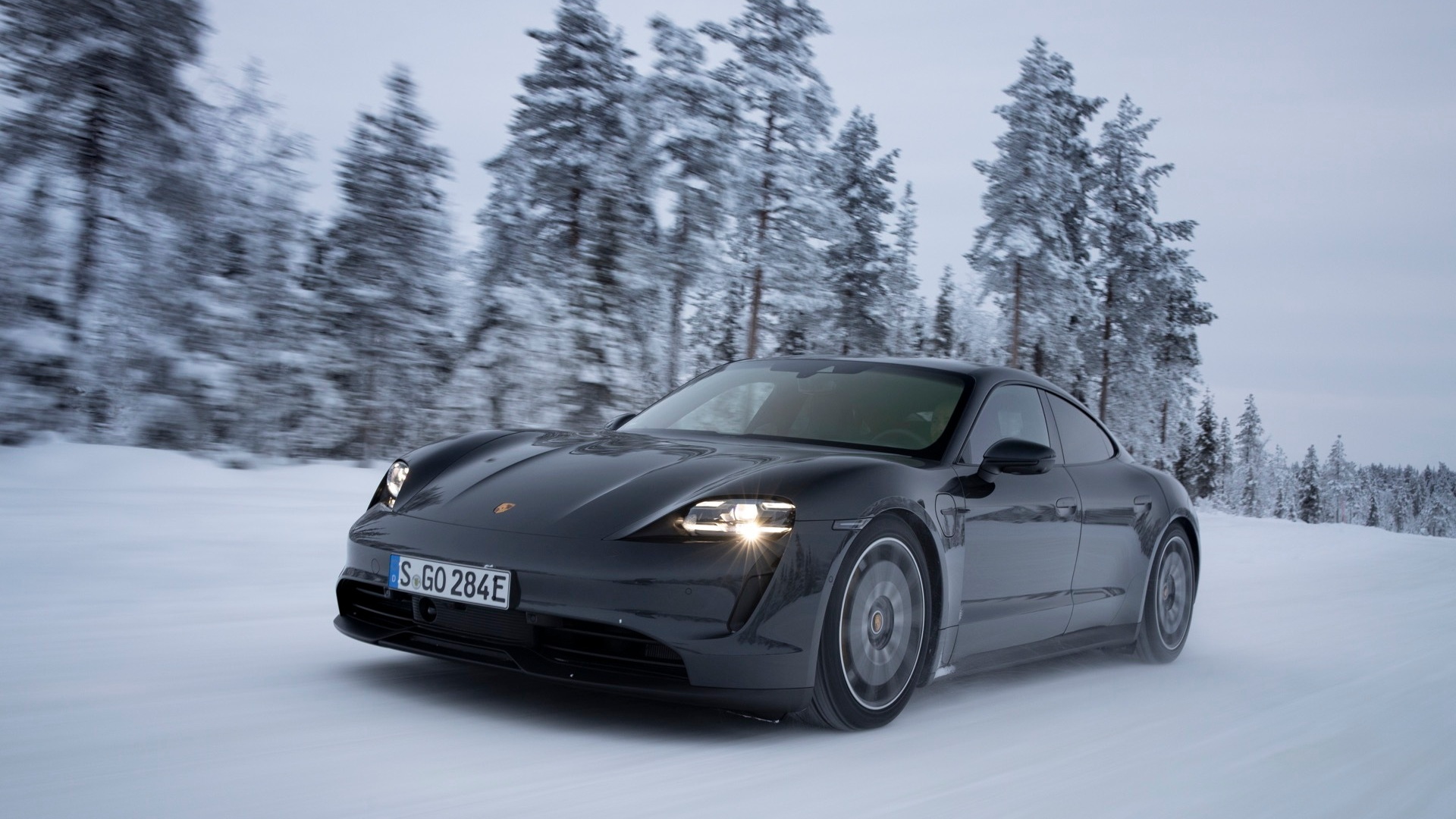 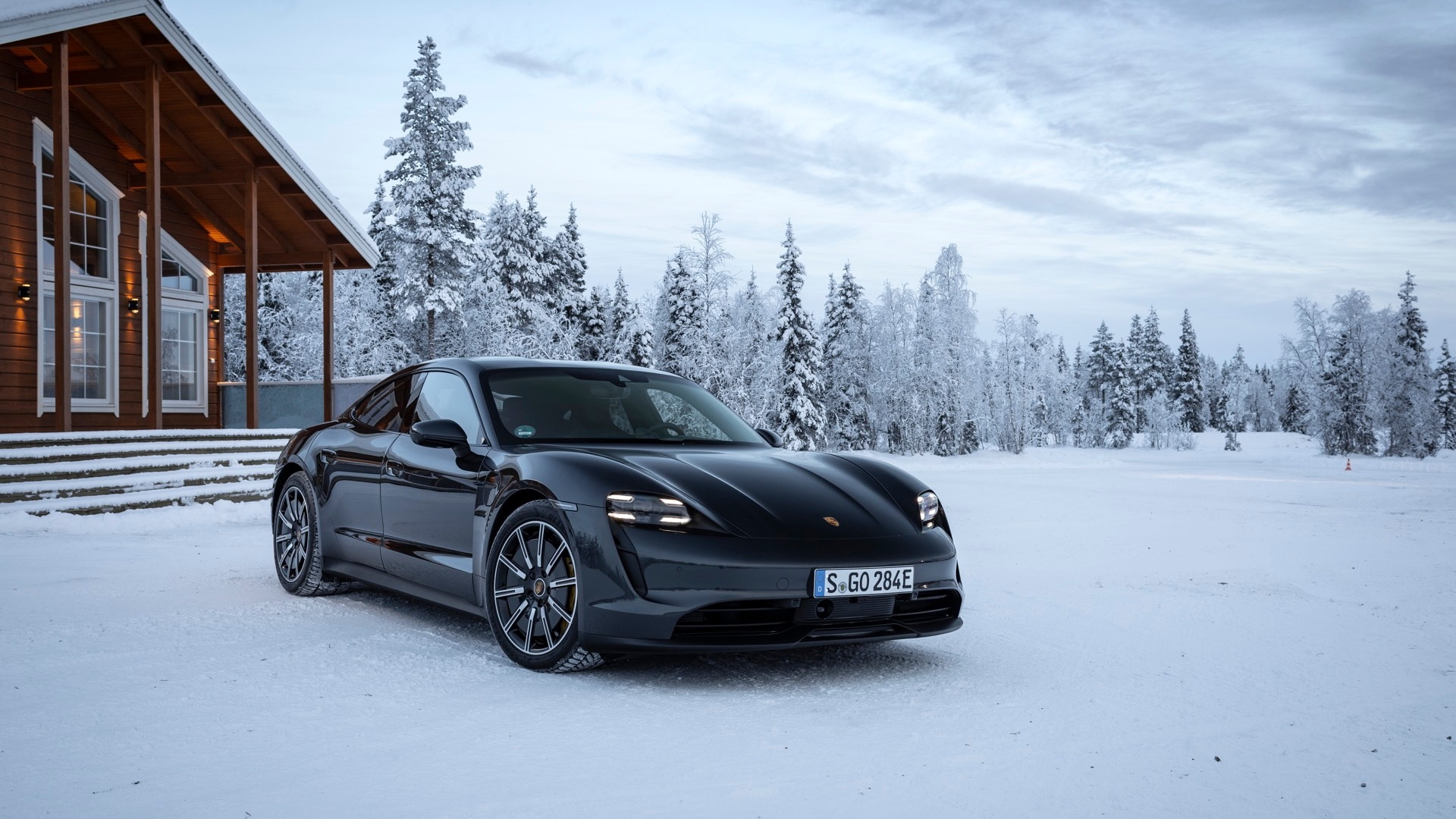 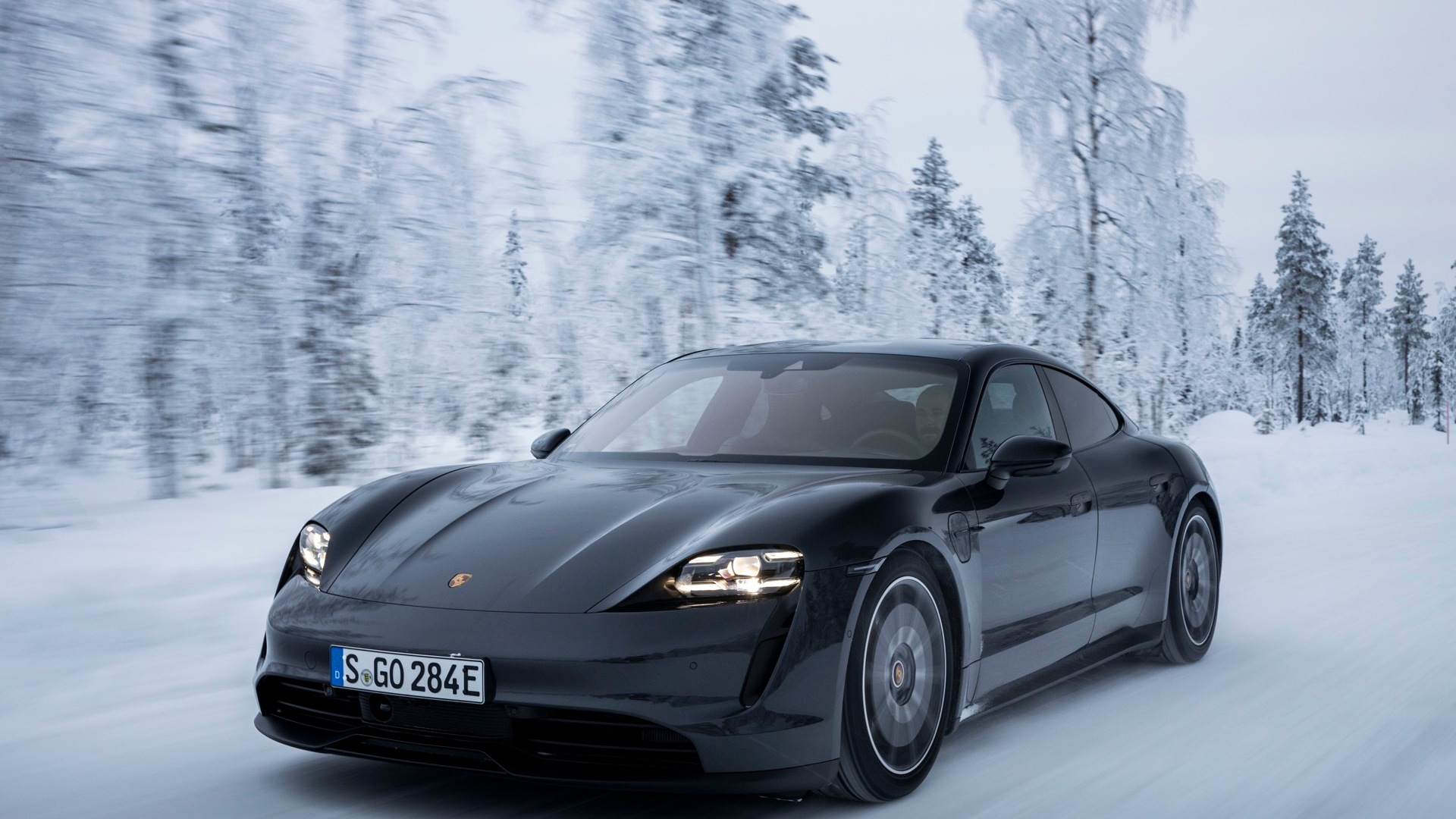 When the sky turns dark and gray, the ground becomes covered with the slickest icy white stuff, and the wheels effectively turn into saucer sleds, you’ll be happy that the 2020 Porsche Taycan 4S holds its weight low on the snowboard it becomes.

It’s an apt analog to the talk about “skateboard” platforms electric-car makers so often describe for cars like the 2020 Porsche Taycan 4S. They’re flat and they keep their heaviest parts, like the battery pack, down low next to the wheels.

After experiencing the Taycan Turbo S and driving the Turbo in Europe earlier this fall—both brutally quick from low speeds and exhilarating even during motorway blasts—Motor Authority recently had the opportunity to drive the 2020 Porsche Taycan 4S and test its poise on two continents, in two very different environments, less than two weeks apart.

First, a morning driving the 4S from downtown Los Angeles up Angeles Crest and back—skateboard mode, I’ll call it—told me a fair amount of about the Taycan’s base-level handling. Second, more time than daylight would allow up in the Arctic Circle, on a frozen lake near Levi, Finland, presented an opportunity to experience snowboard mode.

On the dry roads around Los Angeles, the Taycan 4S was everything I expected—at once both mature yet sharp and athletic. It embodied many of the same traits that I and others on our editorial team so love in the Porsche 911 4S we recently had for Best Car To Buy testing. It’s just so forgiving and composed—and with the suspension’s lift mode it’s drivable on a daily basis.

The variable-ratio steering feels light—a little disconcerting at first combined with the quickness of the ratio—but it all comes together in how it builds some resistance off center, which helps the steering track true on choppy surface streets, tramlined freeways, and more aggressively crowned backroads. On tight corners, even when they weren’t well banked, the Taycan is simultaneously, paradoxically muted yet sharp, and it seems to just hunker down and grab the road with so little lean that it’s easy to find a flow.

To do that, Porsche packed some tricks up its sleeves. The 4S I drove was said to have essentially every performance option on the list, including the Sport Chrono package; Porsche Dynamic Chassis Control Sport, which uses active electromechanical roll bars for flatter cornering; Porsche Torque Vectoring+, which can electronically vary torque distribution—or lock it—from left to right at the rear wheels; and rear axle steering, which adds to stability at high speeds and maneuverability at city speeds.

With so much the same (or optional) across the Taycan lineup, from the base $106,410 Taycan 4S to the $187,610 Turbo S (both at launch-premium pricing)—besides badging and the bragging rights of the Turbo or Turbo S badge—acceleration is the real differentiator.

All Taycan models use the same motor system up front, although the Turbo S gets a higher-power inverter. In back, the 4S has a smaller motor than what’s offered in back in the Turbo or Turbo S (as well as the motor up front). Altogether, the system makes 563 horsepower as tested in Performance Battery Plus guise (with the 93.4-kwh battery pack) or 522 hp with the base 79.2-kwh pack. The latter version won’t be built until about mid-year.

In straight-line performance the 4S is dialed back a notch from the Turbo (3.8 seconds to 60 mph versus 3.0), but you might not ever know it on the street since there are so few opportunities to go full-on launch-control mode anywhere but a track. Just don’t kid yourself about the Porsche Electric Sport Sound (luckily you can uncheck a box on the center touchscreen’s menu and enjoy the silence of electric).

Charge time is the same as the Turbo and Turbo S, which is to say as fast as 22 minutes with an 800-volt-capable charger from 5 to 80 percent if you can hit a sweet spot for the battery temperature and state of charge. And for many more thoughts on driving range and keeping the Taycan charged in these environments, see my impressions on the Taycan 4S at Green Car Reports.

Having been in the 911 recently enough, I found the Taycan’s brakes felt slightly softer for the first inch or two of the pedal stroke. Apply enough pressure to the Taycan’s pedal and there’s a reassuring firmness past that. The feel is also natural. I had none of the issues with stopping short at city intersections I’ve had with some electric cars.

On a particularly chilly morning up Angeles Crest, a thin blanket of snow had fallen beside the road. I wasn’t quite prepared for the little bit of slushy snow on the roadway at higher altitudes—a preview of what was to come in Finland. Although the road tires weren’t the right fit for the mission, the Taycan didn’t miss a step with careful driving, and its defroster and heater worked great as the needle hit 32 degrees outside. That’s when  I decided to turn around and gingerly head back down the mountains.

Fast-forward a couple weeks, and it felt like I was resuming that tease of winter driving in the dusky sunset that’s the entire day in the Arctic. The day began with off a pep talk from a German instructor who told us very clinically and sternly how to instigate a drift in an all-wheel drive car, maintain it, and exit safely.

The cars were again very well-equipped 4S models, but this time with wheels kept to 20-inches (versus the 21s in our LA test car), shod with 245/45R20 Goodyear Ultra Grip Performance V-rated all-season tires (versus the summer performance tires in LA). The Taycans were completely stock, and the winter rubber was chosen from Porsche’s list of approved tires.

Behind the wheel, I was presented with some choices. The steering-wheel mode dial can select between Range, Comfort, Sport, Sport+, and Individual modes. Like many performance cars, the Taycan has a plus (partially off) setting for its stability control, allowing more slip angle before intervention.

While this is probably the setting I’d use for the track, it wasn’t at all a happy midpoint in the snow. It allowed a fair amount of sliding—or just plowing ahead, in some cases—and then a portion of a second later it would work frantically with the motors to try to bring the car back on an intended path that I had no chance of finding.

I spent the most time in Sport but with the stability control completely off—or as off as it gets. Even then, in all fairness, the Taycan could find a shocking amount of grip.

The lesson? Electric motor systems are quick—quicker than I was prepared for in a slick situation. Any adjustments with the accelerator required precise moderation and restraint, not the hamfisted on/off inputs that have worked well for me in small turbocharged all-wheel-drive gas cars.

After a lot of fun on a slalom course, and another course that resembled a giant figure eight, I was feeling bold and overconfident.

As my group moved to a circle course that was tighter and more slippery, my instructor, Finnish rally racer Jerry Heinonen, fine-tuned the instructions to help me kick out the tail, massage the steering to a slight angle, and fine-tune the drift entirely with my right foot. Suddenly, all my inputs started to seem like overreactions.

Jerry suggested in the most polite, understated Scandinavian way possible that going full lock to full lock is probably not the way to maintain a good drift. (Note: As a fellow Scandinavian, I know he was yelling inside.)

I realized that part of the issue is that driving the roughly 5,000-pound Taycan is so vivid, because the accelerator response is just so darn quick. Switching to Comfort mode helped—a lot—and gave my twitchy responses just the right cushion. By then it was pitch dark and time to wrap it up.

When my instructor asked what I thought about the car on this course, my instant go-to was that I’d like the electronic equivalent of a center differential lock. “That, on a version that weighs a lot less,” he quipped, echoing my exact thought at the moment.

Rally-car dreams aside, it’s amazing to think this is the starting point for Porsche electric cars, and it’s on very solid ground. Range will likely get better with time, and so will the charging infrastructure. What doesn’t need change is the feel. Porsche’s soul continues on after tailpipes, every bit with electric, and it’s this awesome.