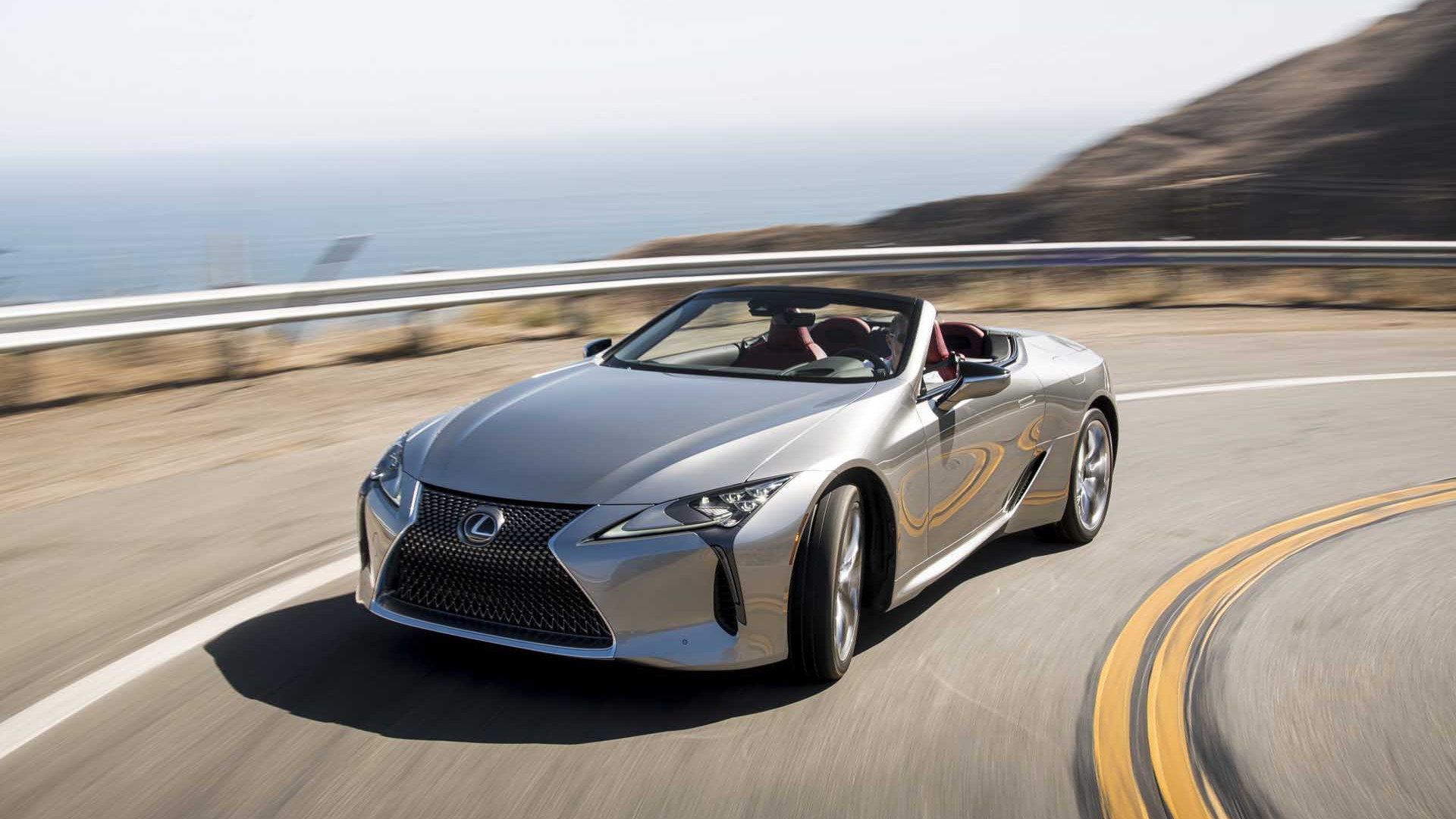 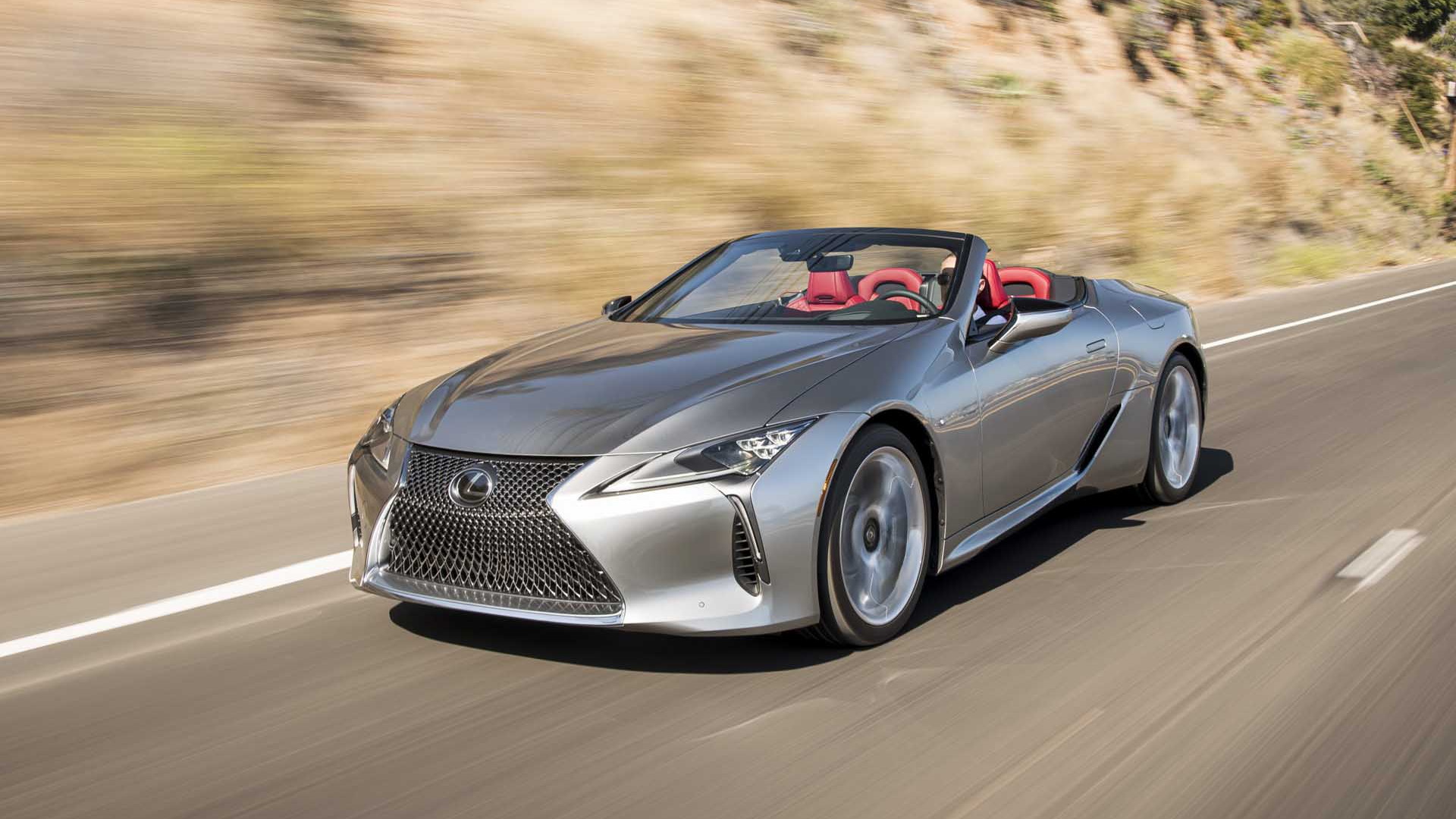 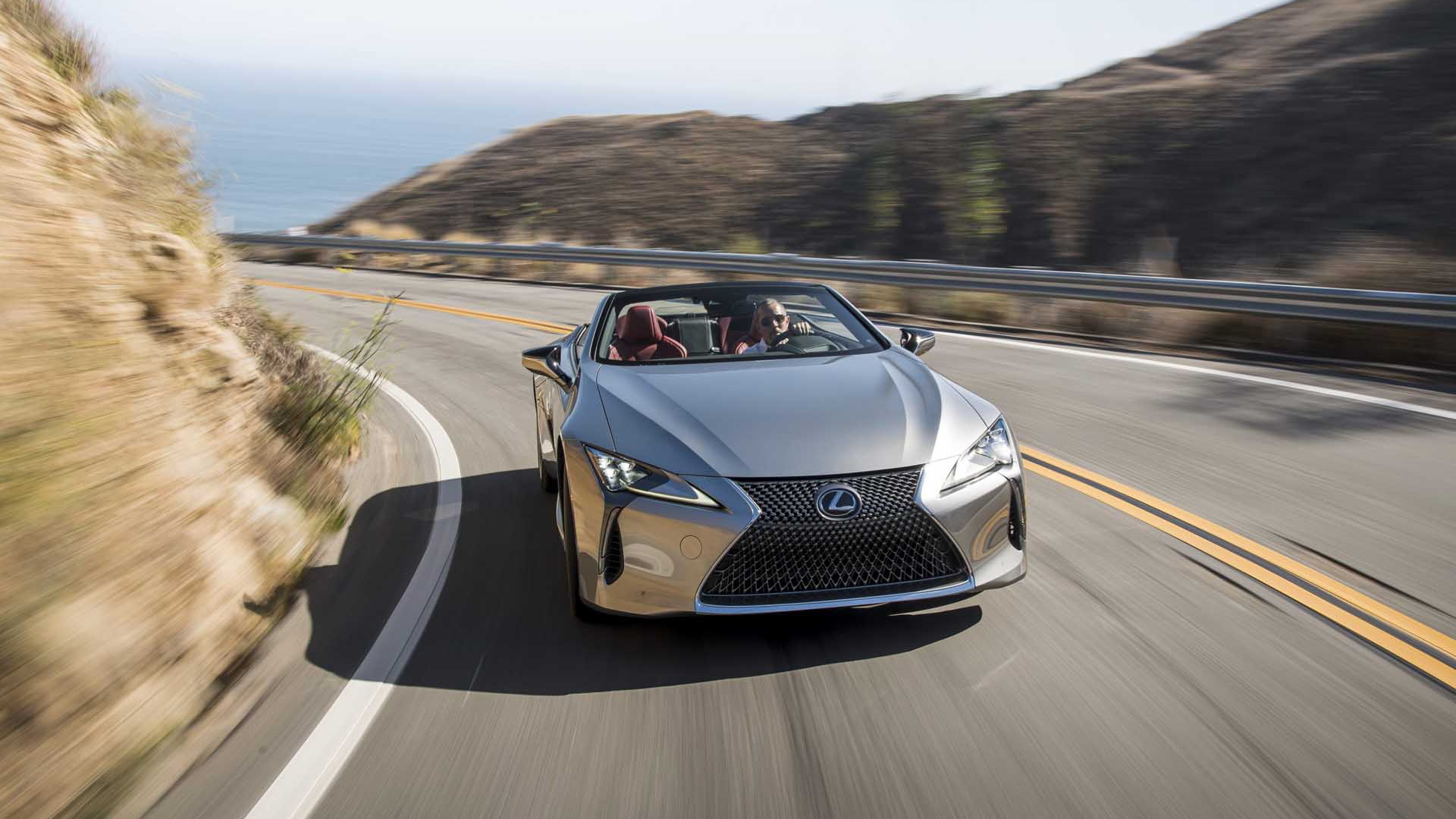 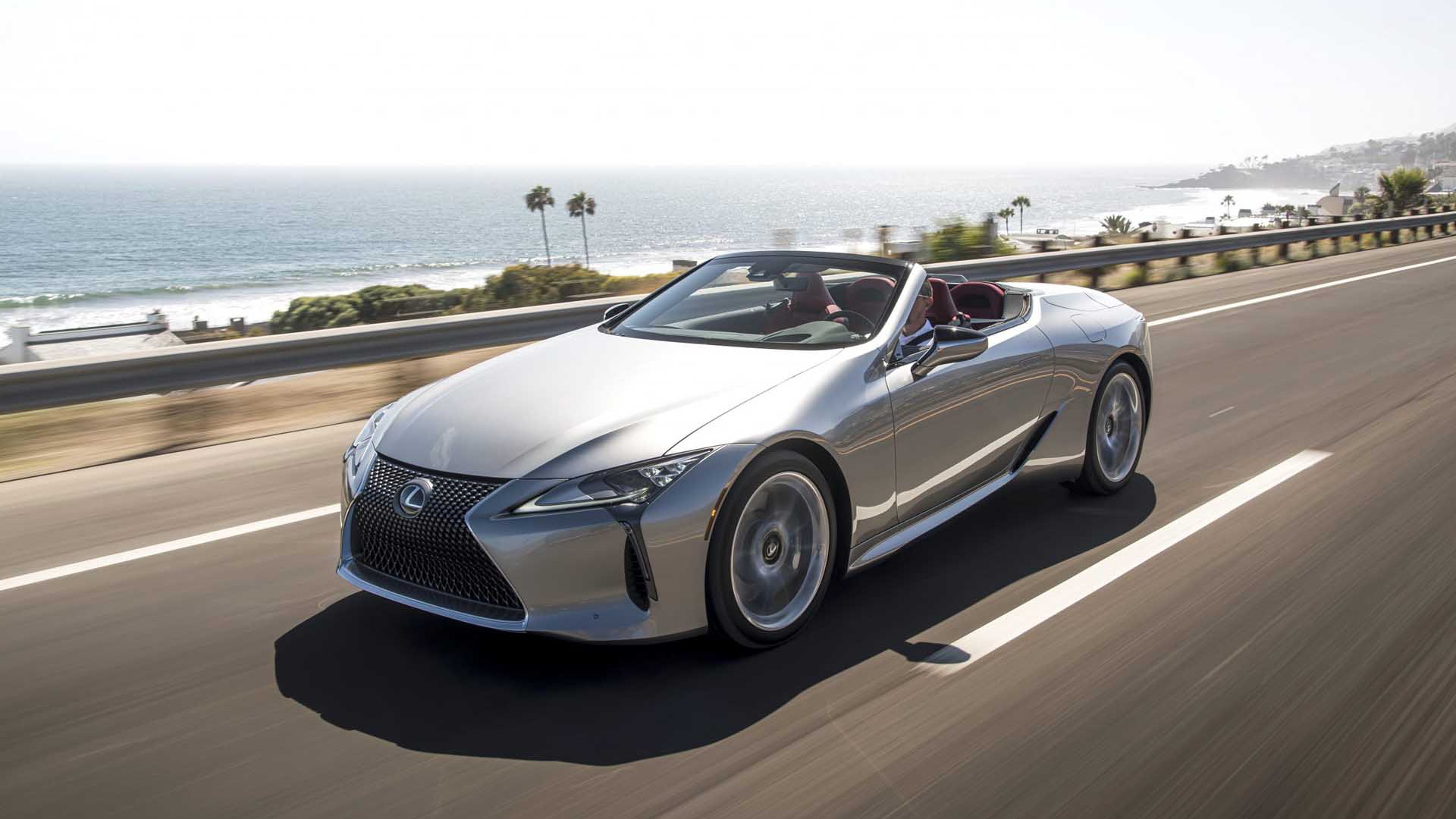 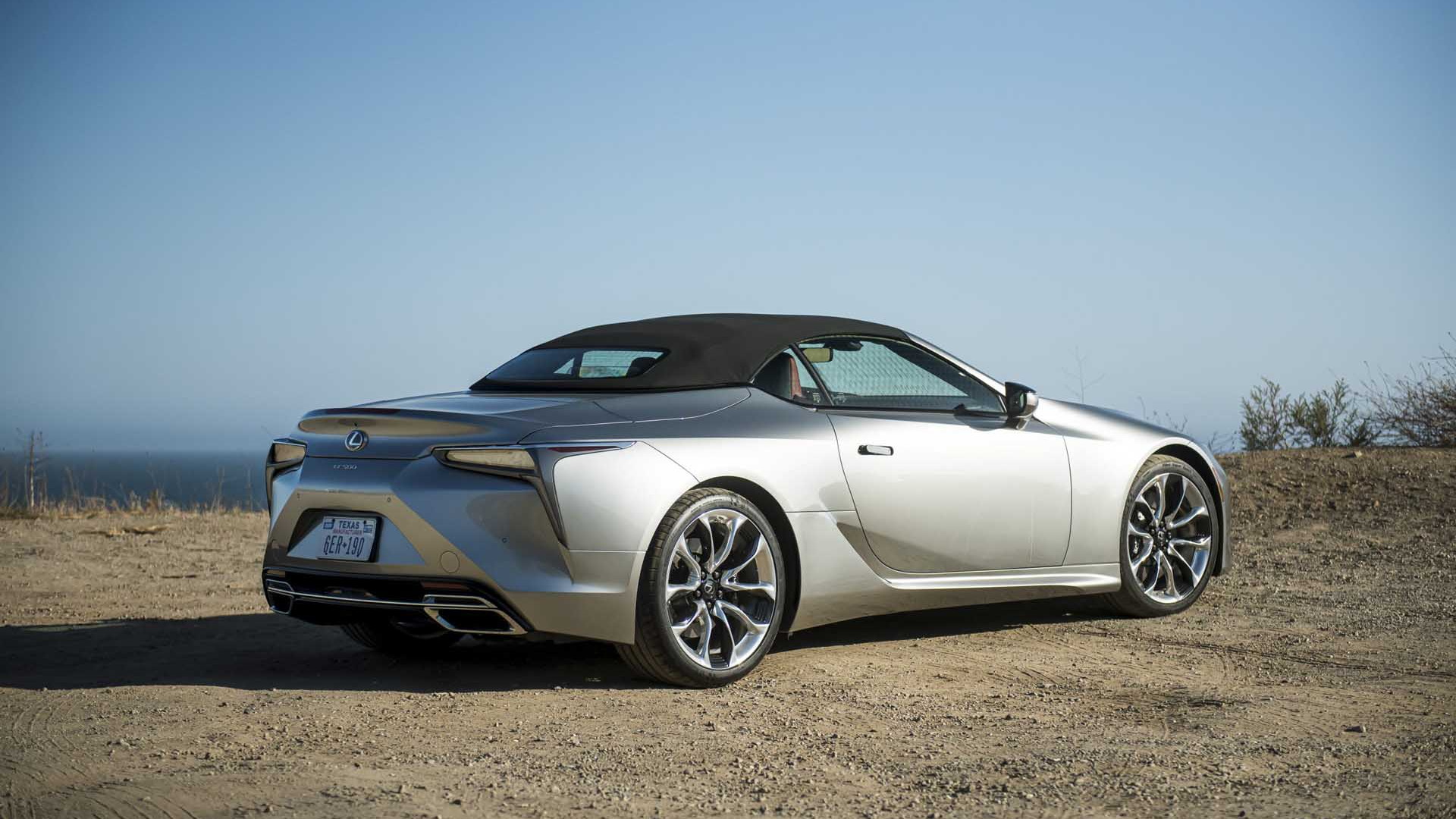 The stick-pin lighting still arrests us. The artistic roar of its 471-horsepower V-8 still haunts us. And now it’s removed its top.

Driving the 2021 Lexus LC Convertible feels like watching “Basic Instinct” for the first time—more than a little naughty and aimed squarely at the voyeurs, sure, but among all its flaws, there’s something distinctive there. Something worth sitting with, again and again, same as the LC coupe I’ve been infatuated with since 2016.

This year the LC dazzles with a new convertible that hardly changes a thing about the mock-Aston recipe that’s made the latest Lexus coupe its best two-door effort yet, and easily the most memorable car in its 30-year history. The LC’s responsible for showing us a side of Lexus never before revealed: ambition.

Introverts need not apply, even four years after its launch, because the LC still is rare enough and so exquisitely detailed for that to not matter. This is a shape for the ages, with an hourglass grille that cinches itself between LED headlights aimed like throwing stars at your retinas. Those little details elevate the two-door’s shape over the usual trite rounded rooflines and sultry surfaces. Lexus kicks it up into hockey-stick air inlets at the waist, then tapers it all into a rear end fastened again with those hatpin LEDs. George H.W. Bush needed a thousand points of light to get his point across; Lexus only needed four.

The LC fits people in snug front bucket seats like bees inside a flower bud and wraps them in winged door panels stitched organically to flow toward a wall of leather and high-definition screens. It’s a cocoon, but one with a room divider in place to keep passengers away from the vital bits: the shifter, the paddle-shift controls, the drive-mode selector. Lexus keeps them occupied with available 915-watt Mark Levinson sound and semi-aniline leather, and that should make them happy.

Drivers get to tap all the other pleasure centers when they press the start button and fire up the LC 500 Convertible’s raucous V-8. There’s a V-6 hybrid coupe that sounds part sewing machine, part Jetsons space scooter—then there’s the 471-hp 5.0-liter V-8, which tunes in through an available sport exhaust to crackle and pop like Rice Krispies through a low-pass filter. With rapid-fire shifts through a 10-speed automatic, it’s capable of a promised 0-60 mph run in 4.6 seconds. It’s never a long press on the gas to leap ahead in traffic, or squeeze off the precise power needed to charge the next set of esses. With the fabric roof lowered (in about 15 seconds), it’s as if it were designed to shoot through tunnels, back and forth and back again, just for the maniacal soundtrack.

It’s put together for some higher calling than grand touring, but not in a way that risks going brittle. Lexus tunes the LC Convertible’s ride for an absorbent and attentive ride and uses adaptive dampers to round off the tremors its big, optional 21-inch treads might send through the roofless body. It skips the rear-wheel steering offered on the hardtop, but hardly misses it—the LC has some of the best programming Lexus has ever coded into its racks. If there’s a fault with the LC’s dynamics, it’s the 4,540-pound curb weight of the Convertible. You’d think the Slim-Fast-sized cupholders would send a message, but, no.

The unforced errors are so few in the LC Convertible, they fit in a few sentences. The infuriating infotainment interface at least offers an Apple CarPlay override—but no Android Auto, alas. The LC Convertible’s trunk is an inexcusable 3.4 cubic feet; we’d give up the useless rear buckets or at least trade them for hatchback glass that upconverted them into useful space. Gas mileage hovers around 18 mpg combined, which I matched during my loop through lower Chesapeake cliffs in the shadow of nuclear power towers in southern Maryland.

Well-sorted for safety gear, the $102,025 2021 Lexus LC Convertible has silently infiltrated new territory, the province of Aston and Jag and even the Mercedes SL. As we’ve said here before, it’s deeply flawed in one or two ways—but does so much else exceptionally well. Maybe the best thing it does is shows where Lexus’s emotional center lives. It’s a pricey enclave, but one full of interesting character.

Lexus delivered an LC 500 Convertible to my mom and dad’s house, and I drove it back down South for them, because what am I if not a highly-paid transportation worker.